I know, I know, I’m about two years behind on a refreshed ‘Gear I Use’ list. Which, is probably because, for the most part, I’m a creature of habit. While I might (ok, definitely) buy plenty of sports gadgets, the rest of my gear remains almost identical. My winter cycling coat? The same from 12 years ago (seriously, here’s the same blue coat to prove it). My socks? The same brand as a decade ago too. I buy maybe a single piece or two of cycling/running apparel each year, usually over Black Friday weekend (which, I didn’t this year).

Nonetheless, I know plenty of you want to know what gear I use. So thus, I present you with a boatload of links. And while there’s a lot of gear here (because I’m covering three sports), I think you’ll find I’m actually pretty simple when it comes to most of my gear (tech goodies aside). And this gear is built up over more than a decade.

I’ve divided it up into the three main sports (swim/bike/run), plus a random section at the end.  Obviously, I don’t use all this gear at the same time.  For example, cold-weather swim booties are reserved for those hideous cold weather triathlons that I’ve succeeded in avoiding in the past decade. I have zero plans to do any crazy-cold weather triathlons anytime soon (though some year the Norseman Triathlon might still tempt me), so the booties basically just hang out in a container in the DCR Cave.

As anyone will tell you – there’s a lot of gear to be had for triathlon, and there’s unfortunately simply no getting around that.  I’m typically not one to buy the most expensive piece of fashionable stuff – and apparel brands don’t tend to mean a lot to me.  I just buy what works for me.  None of these brands sponsor me or anything here.  Everything on this list I’ve bought myself and use day to day.

Also note: This is NOT my usual gadget recommendations post, that’s different. This is simply the gear I happen to use myself. If you’re looking for my specific recommendations on gear, you’ll find my GPS watch recommendations here, my cycling GPS guide here, and my trainer recommendations here (still accurate from last year given only one new trainer in 2021, the JetBlack VOLT was released, which I’ve added to the recommendations guide). And finally, with that – thanks for reading, and for supporting the site via the links above – as an Amazon Associate, I earn from qualifying purchases. 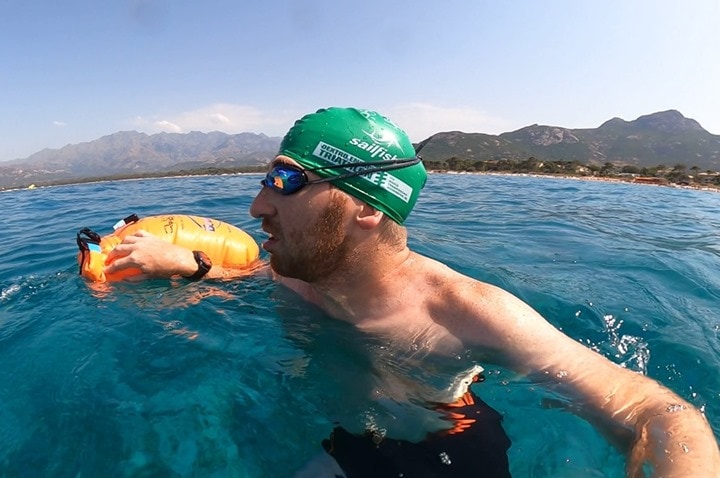 Swimsuit: Nike Victory Jammer and Decathlon Boxer swim Short: I use both, for example in the above shot it’s the shorter Decathlon one.
Goggles: Speedo Fastskin Speedsocket 2 and Speedo Vanquisher: For the most part, it’s whatever I haven’t lost recently. At present, this is what I ordered after I managed to lose my most recent pair of goggles, whereas pictured above from this summer is the Vanquisher. Goggles are like socks in the dryer around here.
Swim Cap: Random Race Caps – Essentially whatever I pull from the massive Ziploc bag of past race caps.
Swim Watch: Garmin Forerunner 745: Assuming I’m not testing anything else, you’ll likely find me wearing this when in the water.
Openwater – Wetsuit: Orca S6 Fullsleeve Wetsuit: This was more a purchase of necessity than anything else. My previous 2XU wetsuit finally died after an apparent shark attack (judging by the holes), and while down in Cape Town three winters ago I needed something. There was an Orca store near the waterfront, so…problem solved. I’m not thrilled with it though, given it ripped along a seam line on my third wearing. Three winters later the small rip is still there. Sigh.
Openwater – Visibility Buoy: Safer Swimmer – When swimming in openwater by myself, I use this to be seen by boats and the like, for example, during these swims.  I take this all around the world with me on virtually all my openwater swims.
Openwater – Booties: Blueseventy Swim Socks – For 60°F and below water, I use these booties to keep my toes warm. Notably, I try incredibly hard to never swim in such water voluntarily.
Openwater – Swim Cap: Blueseventy Skull cap – Again, for super-cold water (looking at you, Boise 70.3), I use this swim cap – but I cut off the annoying chin strap (most people do).
Openwater – Anti-chaff: BodyGlide – To prevent any wrong rubbing of the wetsuit near my neck.  Works well, every triathlete should have it in their swim bag.

Invariably, a strictly pool swimmer will say that’s a lot of gear – but if you divide it up (normal vs openwater), it’s really not that much stuff…especially compared to cycling. Some will ask why not the FORM Swim goggles. Simply put – while I think the tech side of the unit is superb, and super-well executed, I just can’t get past the limited side peripheral vision visibility of the goggles. In openwater swims, seeing what’s out and about keeps me just as entertained as it does watching the denizens of the pool go past. With the FORM swim goggles, that peripheral side visibility just isn’t there anymore. 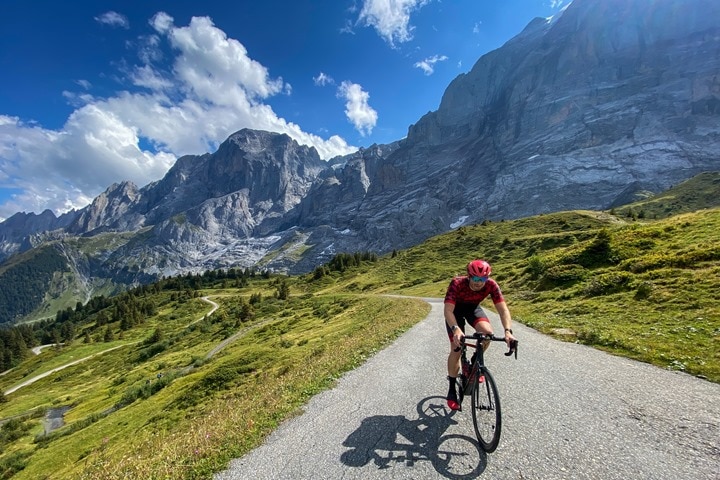 Now once we hit cycling, things can get pretty crazy pretty quick. Such is cycling life! Running Shoes: Asics Gel-DS Trainer 26: I switched this up again this year from the 22 to the 26, just a minor change over the previous versions I’ve used. Obviously, I have the amazing blue with crazy orange base coloring.
Running T-Shirt: Whatever technical t-shirt I grab out of the massive drawer of dozens of them.  If you don’t have any running t-shirts, you’re not doing enough races. 😉
Running Shorts: This is a pretty random assortment of running shorts, some Nike, some Decathlon, some still in the laundry machine. I’m not particular, but I do prefer a pocket or two to stash things.
Running Socks: Balega Hidden Comfort – No questions, these socks…forever.  So soft, just love them.  I’ve never had blisters with them.  Ever.
Running Watch: Garmin Forerunner 745: As outlined in my 8-months later review (it’s now like 16 months), I’ve come to like this little watch. I think the biggest draw for me is the silly 7-day load watch face, which isn’t available on any other watch face for some reason. Helps keep me in check when not on a training plan. Also, I like the size and color. It doesn’t have maps, but I rarely need maps day-to-day.
Running Headphones: Beats Studio Buds & PowerBeats Pro: I use both pretty interchangeably, and like both. I have a slight preference for the over-ear option of the older PowerBeats Pro, purely for security purposes. Note that while I use these while running, I don’t tend to run with music unless I’m testing something.
Long Run Hydration: CamelBak Marathoner – I’ve had this for probably close to a decade now, and it just works. Fear not, I’ve replaced the water inset in it, but it’s what I use on longer runs or hikes. I also use it sometimes on runs to hold more GPS watches. 🙂
Place to stick stuff on runs: Spibelt – Most runs, I don’t bother with anything.  But for some random runs, while traveling, this works as a great place to stick house/car keys, credit cards, or even gels.  I’ve tried a few brands, this one just works the best for me.
Cold Weather Running Top: I don’t have a specific top I use, rather, I tend to layer bits and pieces together. Here’s an older post on all my cold weather running thoughts.
Cold Weather Running Tights: Asics Running Tights – Look, like most of my clothing choices, it’s often just what I happen to find available at a running shop. That was the case here. My previous Sugoi ones were getting a bit tattered, but I was headed on a trip to the Arctic Circle in December, so I desperately needed new running tights, and this was what my local running shop had that I tried on and liked. I do very much like them, but my research is hardly extensive here. Also, I can’t figure out the exact model that it is. It just says H1 on it, but nothing else.
Cold Weather Running Gloves: $1.00 race expo gloves – That’s it.  It’s easy.  I almost never throw them away, I feel guilty.  So I use a few rotating pairs, all from expos – some even free!  I’ve got a pair of no-brand mittens that I toss on if the weather is super-cold, but like running tops in cold weather, you’d be surprised what your body is fine with once it’s up to speed.  All you folks in Minnesota though shouldn’t adhere to this section.  Just go to the Arctic section of REI instead.
Ice Running: Yaktrax – There’s no better way to run on compact snow and ice, albeit not much of that in Amsterdam most of the time. Though, last year they got some serious ice usage here. Note that for deeper snow though, they aren’t as useful/necessary. 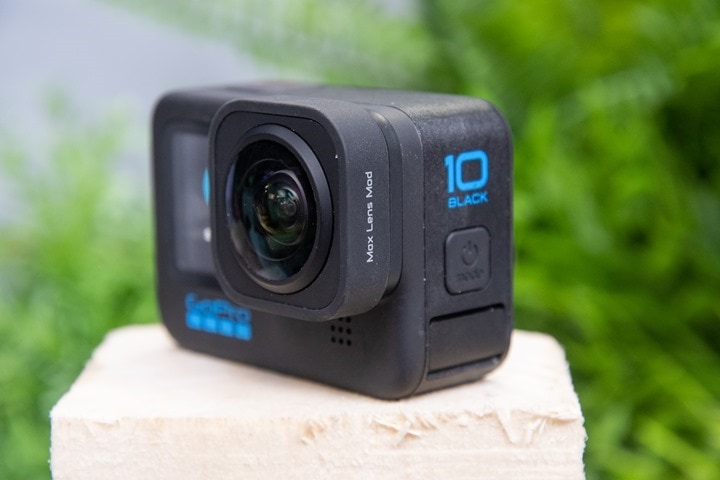 Daily Action Cam: GoPro Hero 10: This came out this past fall, and I’ve iterated from the Hero 9 to the Hero 10, mainly for the extra resolution and framing with higher modes.
GoPro Accessories I use: Complete list here: It’s basically all the accessories I still use daily.
Preferred Drone: Skydio 2 & DJI Mavic Air 2: I use these two drones for most of my stuff. The Skydio if I need to track myself, and the Mavic Air 2 if I’m looking for more general usage. That said, I’ve also got a little DJI Mini and Mini SE that I sometimes take with me on trips for general stuff if I really want to pack light.
All Other Photography Gear: Be sure to check out my full photography page, which lists all the cameras I use when I’m not swim/bike/running.
Race belt: FuelBelt GelReady Race Belt –  For races, to put your number on for the bike and run.  It also holds gels, though, not as well as I’d like.  Better just as a race belt for the number than a storage platform.
Transition Bag: I’ve simply moved to a generic REI backpack or literally, a plastic bag this past September. I’ve just found less is more here. There’s little reason for me to have a giant bag full of gear if you’re prepared ahead of time. As long as it has places to clip stuff on the sides, you can carry a lot with a little creativity.

For long-term readers, you’ll notice that I don’t tend to change the apparel side very much. Most of that stays pretty much the same for years (even including this paragraph). Things like shoes only change a tiny bit between available variants of the same model. Same goes for other non-tech categories.  I tend to be a person that sticks with what works rather than re-invent the wheel.

Obviously, there’s a lot of gear there, but that’s primarily because you’re training for three different sports.  Actually, it’s sorta like 4-5 sports, with openwater swimming and pool swimming both having different requirements (i.e. wetsuits), plus you have specific gear you’d use in triathlon that you don’t use in road cycling (like triathlon suits).

It should be noted that none of the stuff seen above is stuff that I’m testing for reviews.  Every single item above I’ve bought and use in my normal day-to-day training.  Obviously, you see me use gear in testing too – but this is what’s left after you peel the testing and reviewing away.