Biospeed Aerus Bike Case Review: How I travel with my bike

If you travel as much as I do for work (150,000+ miles last year), you’ve got no choice but to get creative with your training.  There’s simply no way you can be competitive at all three sports without actually training in all three sports (disappointing, I know…I keep hoping that Pasta Eating can be substituted for swimming).  Of course, some sports are easier to train for while travelling than others.  In the past I’ve talked about how I train and travel, but I wanted to spend this post and focus on the bike segment.  Running is easy – you can run just about anywhere on earth (ok, Haiti was a no-go for running).  Swimming though, albeit a logistics and financial pain in the butt to find a pool, can be done with a bit of homework.  But cycling…that’s tough.

See, many hotel gyms these days have transitioned over to EZ-Boy recliner type stationary bikes.  And while Spin bikes are on the rise in higher end American hotels, they haven’t made it to the international scene yet – nor to the ‘Hilton Garden Inn’ type hotels I’m usually at while stateside.  Further, none of these really solve the long-ride problem.  Weekday rides I can get away with on a stationary bike at a hotel, since it’s primarily an aerobic experience.  But for the 2-6 hour (or longer) Ironman and Half-Iron type rides, you just need a real bike.

I’ve got a long and storied history with dragging my bike around the country and world.  My first experience with this venture was over three years ago when I did my first half-iron triathlon (The Big Kahuna), down in California.  Not knowing what I might need long term, I simply went to Performance Bike nearby and picked up their $200 bike case.  Seemed sturdy and simple enough.  So into the case Mr. Bike went. 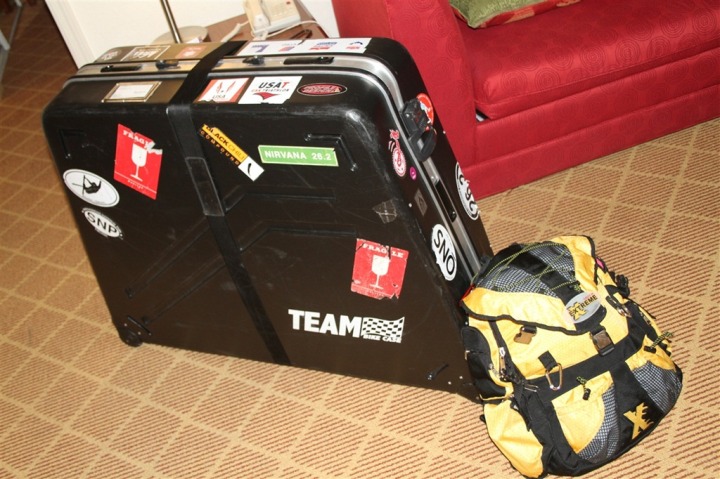 But, after just a few trips I started to notice something.  This bike case is a piece of crap.  Really…crap.  The hinges started to break.  The handles started to snap.  The locks become inoperable.  They had taken every build short-cut they could with it – and my bike case was slowly disintegrating – and with it, putting my bike in further danger each trip.

So, I started looking around for an alternative.  While the Performance case was cheap – it lacked long term life.  Other cases on the market however, lacked cheap – but appeared to be built like tanks.  It then starts to become a cost equation.  If I spent $400-600 on a case, will it last three times as long as the crappy Performance case?

Before I finished mentally debating that – I started hearing murmurs about new soft cases.  These cases were slowly making the rounds on the pro scene, and also infiltrating the age groupers as well.  The benefits were actually more than meets the eye.  First, the case was a bit smaller – easier to manage and drag around an airport with a simple shoulder strap.  Secondly, it was easier to pack.  And third – most importantly – it didn’t scream ‘Bike Case’.  In fact, it didn’t scream anything at all.  The word ‘bike’ isn’t anywhere on it. 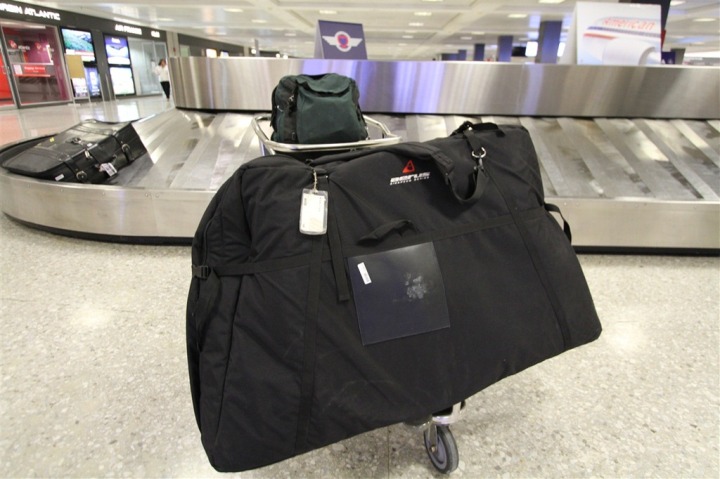 And that my friends…is the key.  You see, when you arrive at an airline check-in counter the world around, the first thing they do is scope out your luggage (ok, usually they scope you out first, especially if you’re good lookin’).   If you have something that looks like a bike case, they immediately start to find the fee table for it – often costing upwards of $150 each way (yes, some airlines like Southwest and JetBlue are cheaper though).

But the soft case…not so much.

In fact, out of the 20-30+ flights I’ve taken with it over the past year, only once have I been charged a bike or oversize fee.  To them, it looks like a big bag – one that barely weighs 20-25 pounds.  Some airline agents have said it even looks like a ‘portable massage table’ (which are fee-free btw).  When asked what’s inside, I’m usually pretty generic: “Equipment”.  Or, if pressed “Equipment while working”.  All technically true.  As a related side note, simply placing your wetsuit draped long-ways over the top of the bike has immediate visual benefits should airline inspect occur.  Oh, and you don’t need to worry about TSA.  They’ll no doubt open the case every time, but since the soft case easily opens for them to peek inside, they’re quickly happy without damage to your bike.

P.S. – TSA and the airlines are not the same entity.  TSA doesn’t give a hoot about fees, airlines do.  TSA oversize checked baggage inspection comes after check-in has completed and is done in a separate area that you drag your bag to.  Always be upfront and honest to TSA.  Always.
Secondary P.S. – Always check-in online prior to arriving at the airport, and just note how many bags you have as you normally would.  Agents usually don’t want to re-do baggage fees if you’ve already done them online.  Trust me on this one…
Third P.S. – Airlines won’t likely reimburse you for the cost of the bike anyway.  And they won’t do it even if it’s their fault (which it never will be).  Lots of messy details of course, but in short, you’re likely to walk away with nothing.
Fourth P.S. – Always approach the ticket counter with the bike case behind you slightly out of view.  It should be the last item you give them – after they’ve printed out the bag tags.
Fifth P.S. – This may sound like I’m trying to avoid bike fees.  I am.
(Note: I’m all for reasonable bike fees…but you don’t even want to get me started on the state of US aviation bike fees today…that’s a post for another day.)

So how does it stand up?  Well, I’ve had pretty good luck.  My bike has largely been unscathed.  I’ve had a few minor cable tension related issues, but nothing that couldn’t be quickly fixed with a multi-tool.  And, I suspect those are mostly because I’m usually in a rush to pack it up.  Speaking of which – I can pack/unpack this case from the end of a workout in about 10-12 minutes.

So, I make up for it by padding the crap out of it.  After all, my race bike is damn expensive.  So what better parts to use than super-cheap less than a dollar pipe insulation foam from Home Depot? 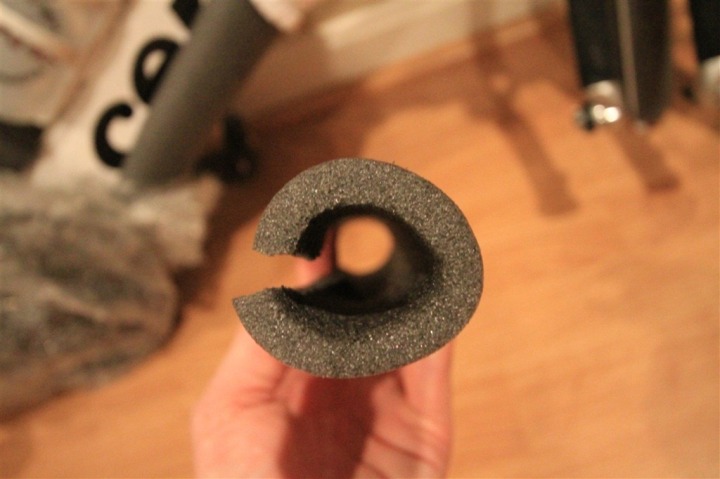 One night The Girl and I went down the street to the big orange Home Depot and simply grabbed a whole pile of long 8’ segments.  We then cut them up as needed using scissors.  In theory, I could be really organized and label where each section goes using a marker.  But in reality, I just figure it out on the fly each time. 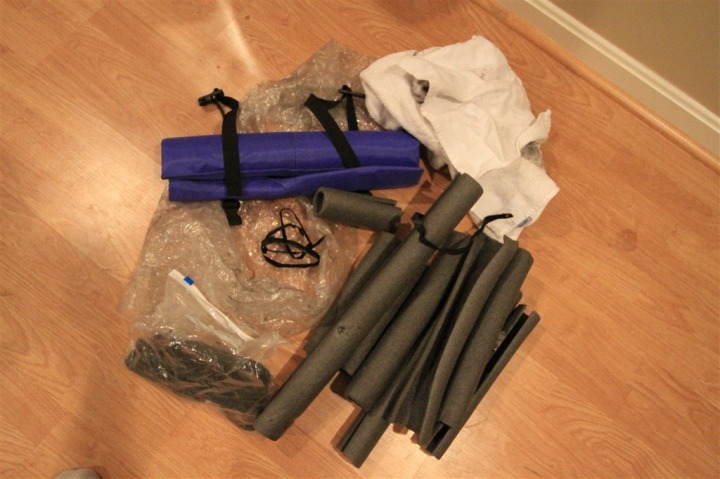 These then get wrapped around the different bike parts.  They stay there just fine.  For the top tube, the bike bag came with that funky blue thing – which I use as extra padding.

For the crank, I simply have a big ole’ chunk of bubble-wrap to protect Mr. Quarq. 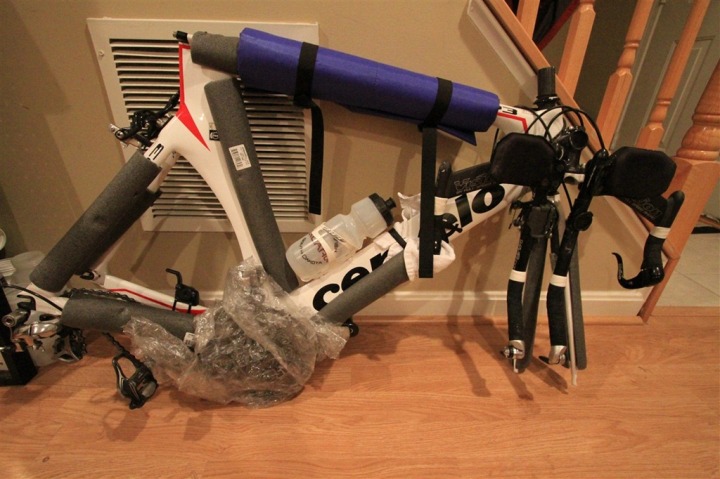 The rear derailleur I pull up against the bike frame using Velcro.  No, not ideal.  Yes, I should take it off.  I know…I know.  Do as I say, not as I do. 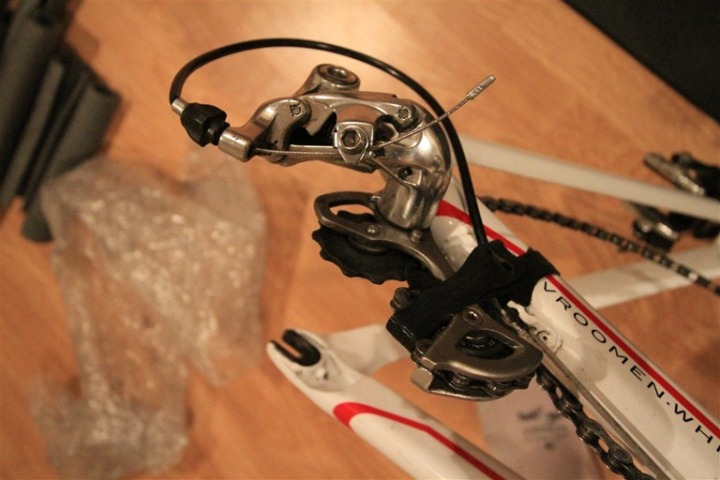 Pickup a pack of Velcro at Target, it’s a couple bucks and you’ll find never ending ways to use it in bike packing.  For example, strap your aerobars back against the padded frame to prevent scratching.  Loose aerobars and brake handles will flop around and scratch.  Ones tightened up against the frame don’t. 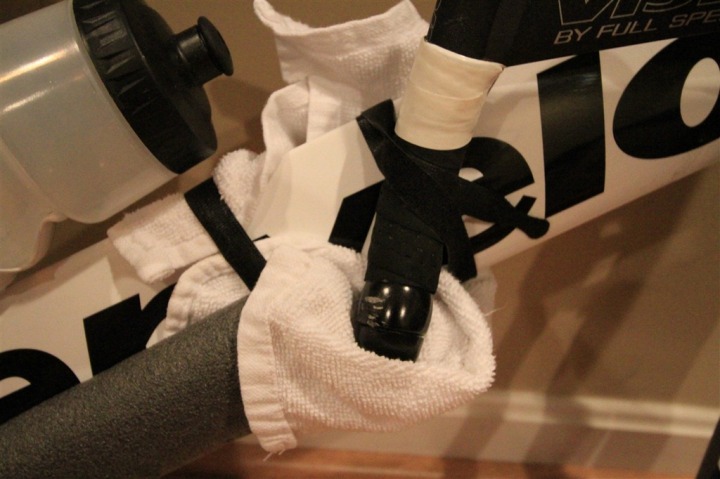 The wheels simply slide in the two main side pockets, and I’ve had no problems with their placement.  The bag also includes two more pockets for shoes (to the left of the wheel below) – which is where I can also stash goodies. 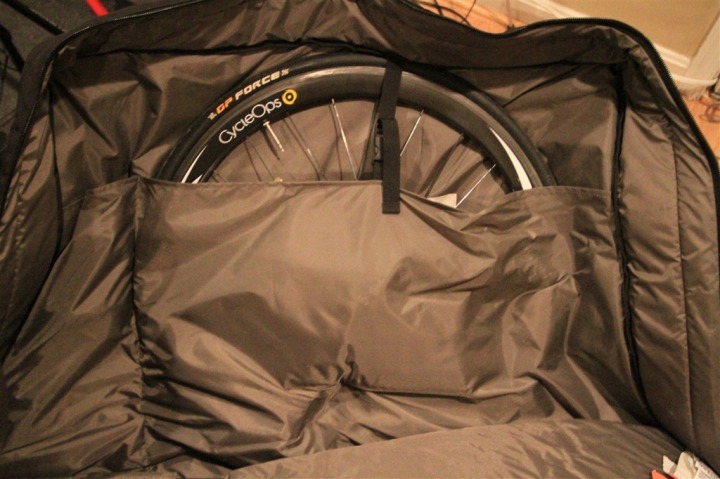 And finally, all my spare parts that I detached from the bike go in a Ziploc bag next to the shoes in the above pocket. 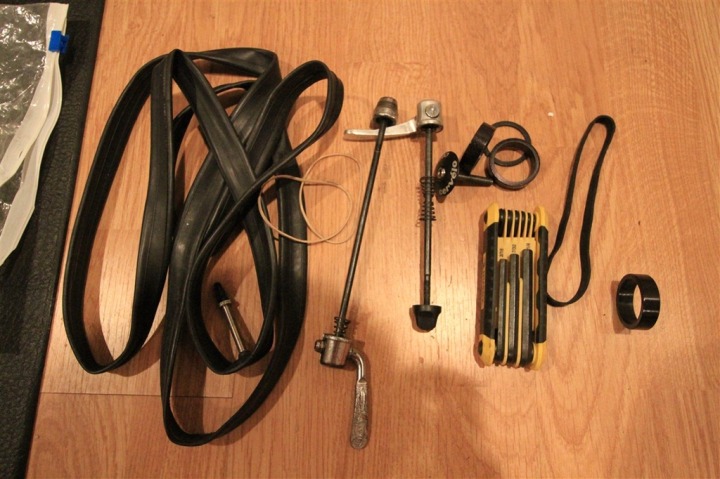 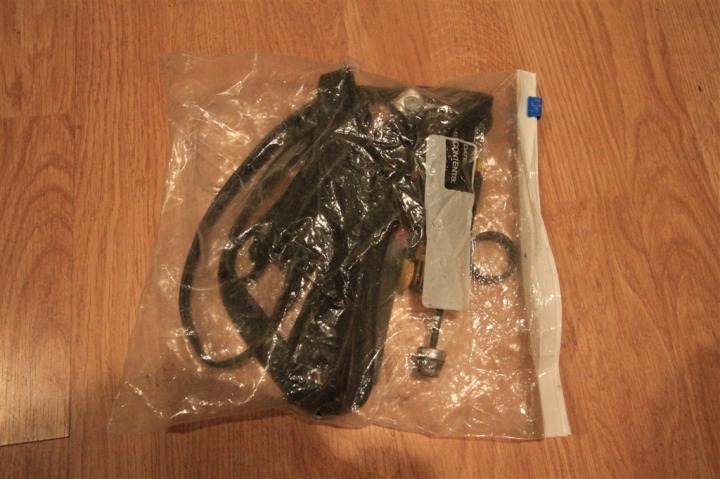 Oh – and because the case is wide enough, I don’t even need to detach the bike pedals – sweet!  My non-aerohelmet fits perfectly where the rear wheel goes – protecting it.  And my seat simply fits upside-down right behind the fork. 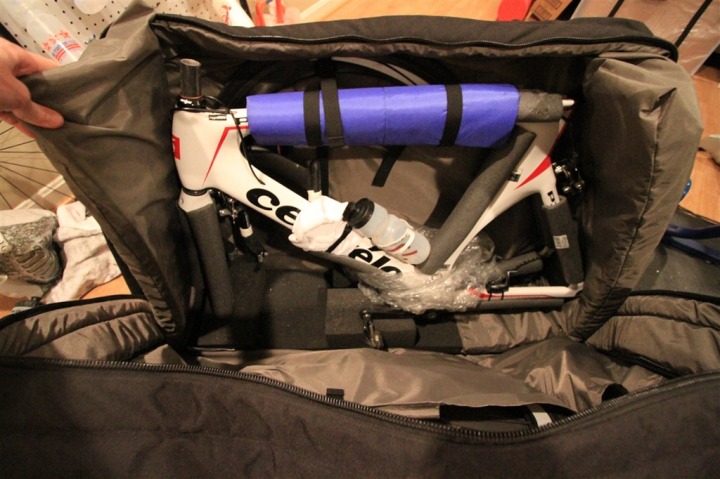 Finally, a word about potential damage.  It goes without saying that a soft-shell bike case is fundamentally more vulnerable than a hard-shell one.  I know from flying enough that bags get the crap beat out of them.  Most baggage handlers don’t differentiate between a bike and a suitcase.  I’ve winced as I’ve seen my bike tossed through the air from luggage cart to belt out on the tarmac.  And I’ve seen the story about one guy who had his soft case and associated bike torn up by Delta.  But, what I haven’t seen is any of those things happen to me…yet anyway.

I also counterbalance that against the costs associated with flying with your bike.  Take for example, The Girl’s bike.  On a trip this summer her derailleur hanger got bent a bit, and she had to get a new one (btw, always travel with a spare if you can, it’s a few bucks and they’re designed to bend so your frame doesn’t).  She was using the soft-shell case.  Had she been using the hard-shell case she would have been charged $300-$500 round trip.  Her bike fix costs?  $40 at the LBS.  A month later, another trip.  This time, to Vegas.  Had she taken a hard-case to her Vegas Tri, that would have been another $300-500 in bike fees.  At some point you have to balance the potential cost for bike damage (usually pretty low), compared to the cost to transport your bike. All food for thought.

So there ya have it – how I transport my bike.  It’s not perfect, but it works for me.  And with my rate of only one trip out of 20+ being charged for carrying my bike, and all of them coming out with the bike happy – I’m happy!

(P.S. – The soft case is made by Aerus (Biospeed) and costs $280.  I paid full price for my case last year, and the company has no idea who I am.  There is a new one out there by Biknd that I saw at Interbike, which looks great – but also clearly looks like a bike case, thus only solving half the problem.)

(Another P.S. – A brief word about bike rentals.  While renting is occasionally an option – it’s actually more difficult than you might think.  Most road bike rental places in the US…suck.  The bikes are usually old and crappy, and unlike anything you’re normally riding.  Further, they tend to be really expensive compared to how much time you’re actually using it.  Third, you’re still stuck bringing much of your own gear like shoes and potentially helmets.  Fourth, reserving and picking up the bike tends to be a giant time-sink – especially if you’re on a tight work schedule and the bike shop is only open during daylight hours 15 miles away from you.  Finally – in the case of long-distance triathlons specifically – the most important factor in doing well will be how comfortable you are on your bike for 5+ hours.  Doing long-rides on a rented bike isn’t ideal long term.)

Update April 2015: After a long-time coming, Clever Training now sells the case directly – the same one I use.  Best of all, DCR readers save 10% with the DCR Coupon Code DCR10BTF – plus get free US shipping to boot!  And of course, it supports the site here. It’s still the same case I use for all my travels with my bike (as well as what The Girl now uses too).  Works great for both of us, and still maintain my usual ratio of non-fees using the tips provided above.  Enjoy!