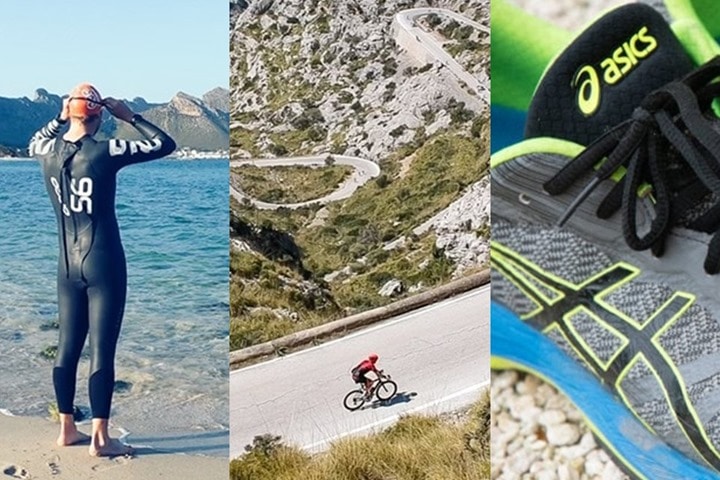 It’s nice and quiet during the summer lull between product release cycles (which usually start again around the first week of September), so it’s as good a time as any to do my annual ‘gear I use list’. The last time I did so was last fall.  And for the most part, things honestly haven’t changed too much. Though most of the tech actually has, whereas most of the non-tech things haven’t really changed.  I still use the same winter cycling/running gear, and the same swimsuits. Though I did get a new wetsuit.

While there’s a lot of gear here (because I’m covering three sports), I think you’ll find I’m actually pretty simple when it comes to most of my gear (tech goodies aside).

I’ve divided it up into the three main sports (swim/bike/run), plus a random section at the end.  Obviously, I don’t use all this gear at the same time.  For example, cold-weather swim booties are reserved for those hideous cold weather triathlons that I’ve succeeded in avoiding in the past half-decade. I have zero plans to do any crazy-cold weather triathlons anytime soon (though some year the Norseman Triathlon might tempt me), so the booties basically just hang out in a container in the Cave.

As anyone will tell you – there’s a lot of gear to be had for triathlon, and there’s unfortunately simply no getting around that.  I’m typically not one to buy the most expensive piece of fashionable stuff – and brands don’t tend to mean a lot to me.  I just buy what works for me.  None of these brands sponsor me or anything here.  It’s just what I’ve bought myself and use day to day. 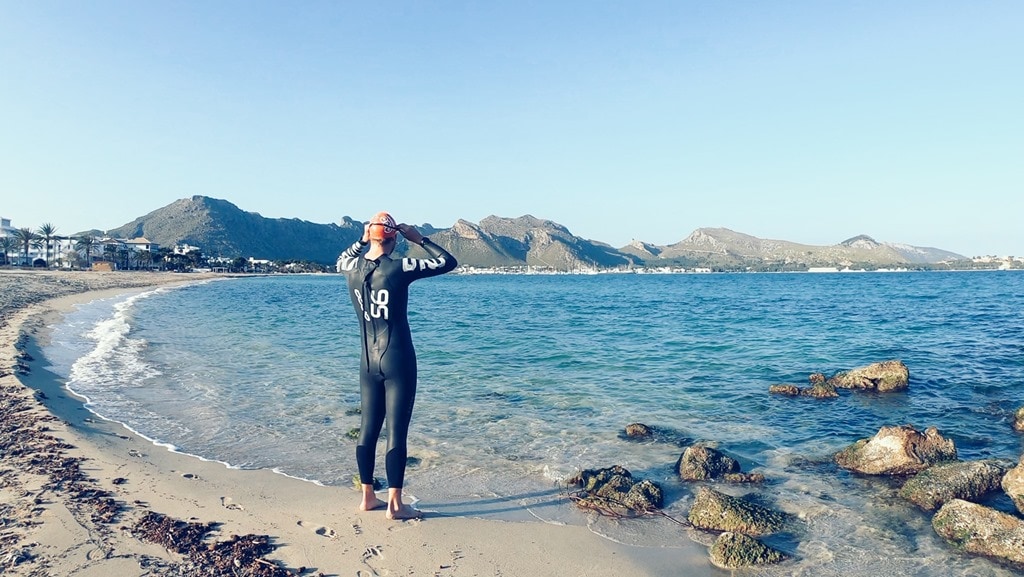 Swimsuit: Nike Victory Jammer: I know, I do dabble in the shorter square leg ones as well, but this is mostly my go-to suit – which is basically the same as it’s been for years. I also have random non-jammer suit I got at some pool in some foreign country when I forgot mine on a trip.
Goggles: Speedo Vanquisher:  For the most part, it’s whatever I haven’t lost recently.  At present, this is what I usually end up grabbing. Goggles are like socks in the dryer around here.
Swim Cap: Random Race Caps – Essentially whatever I pull from the massive Ziploc bag of past race caps.
Swim Watch: Garmin Forerunner 945: I continue to have accuracy issues in openwater with the FR945 as I’ve outlined previously, though Garmin says they hope to have those fixed sometime this summer. I don’t have any pool accuracy issues. Since the FR945 is sorta my all-around watch when I’m not testing something else, it gets swim privileges as well. Note that I typically don’t wear an HRM-TRI or HRM-SWIM with my swims (and thus don’t have HR data from swims), though Garmin did just release a beta firmware update enabling that.
Openwater – Wetsuit: Orca S6 Fullsleeve Wetsuit: This was more of a purchase of necessity than anything else. My previous 2XU wetsuit finally died after an apparent shark attack (judging by the holes), and while down in Cape Town this past winter I needed something. There was an Orca store near the waterfront, so…problem solved. I’m not thrilled with it though, given it already ripped along a seam line on my third wearing. Sigh.
Openwater – Visibility Buoy: Safer Swimmer – When swimming in openwater by myself, I use this to be seen by boats and the like, for example, during these swims.  I take this all around the world with me on virtually all my openwater swims.
Openwater – Booties: Blueseventy Swim Socks – For 60°F and below water, I use these booties to keep my toes warm. Notably, I try incredibly hard to never swim in such water voluntarily.
Openwater – Swim Cap: Bluesventy Skull cap – Again, for super-cold water (looking at you, Boise 70.3), I use this swim cap – but I cut off the annoying chin strap (most people do).
Openwater – Anti-chaff: BodyGlide – To prevent any wrong rubbing of the wetsuit near my neck.  Works well, every triathlete should have it in their swim bag.

Invariably, a strictly pool swimmer will say that’s a lot of gear – but if you divide it up (normal vs openwater), it’s really not that much stuff…especially compared to cycling. 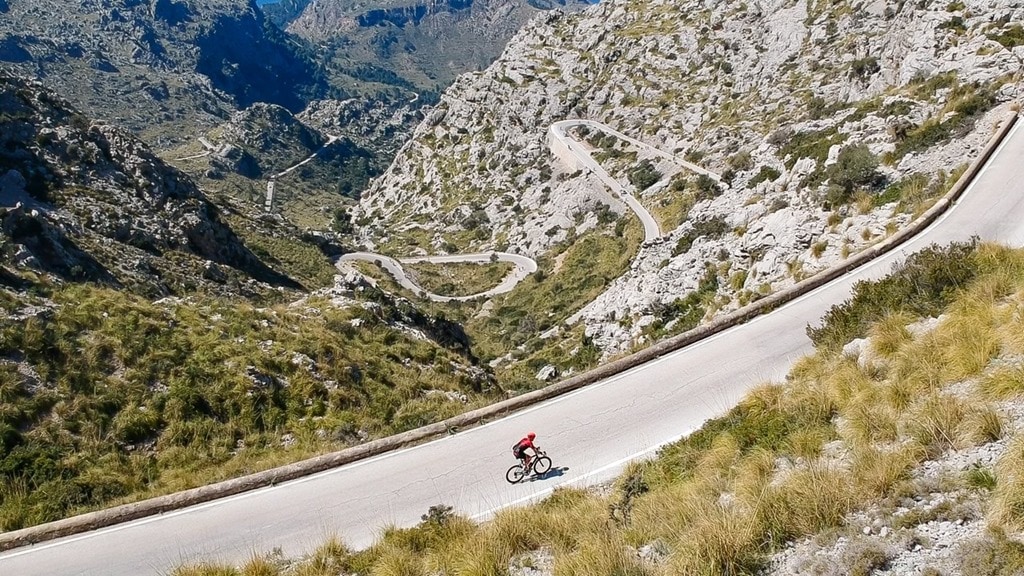 Note, for this year I’ve just gone with my core bikes. I’ve got a few other road bikes around, but I rarely use them these days.  You can look at my much older ‘Gear I Use’ posts for details on those two bikes. 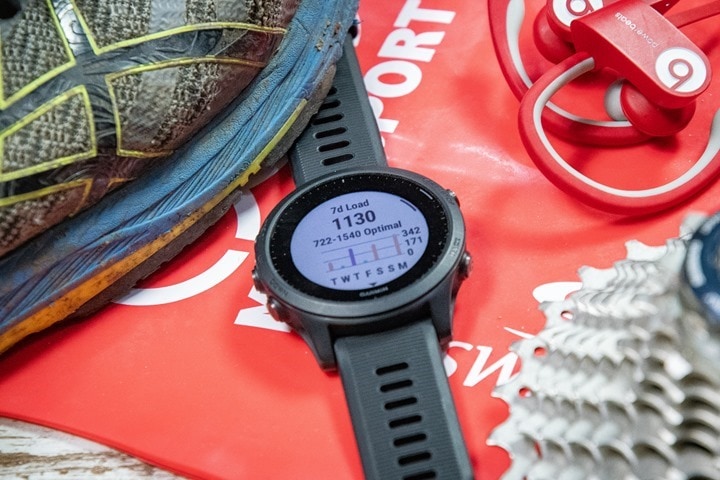 Running Shoes: Asics Gel-DS Trainer 22: I switched this up again this year from the 19 to the 22, just a minor change over the previous versions I’ve used.
Running T-Shirt: Whatever technical t-shirt I grab out of the massive drawer of dozens of them.  If you don’t have any running t-shirts, you’re not doing enough races. 😉
Running Shorts: Nike Dri-FIT running shorts: I mostly wear these first, but I’ve got plenty of pairs of shorts that I use.
Running Socks: Balega Hidden Comfort – No questions, these socks…forever.  So soft, just love them.  I’ve never had blisters with them.  Ever.
Running Watch: Garmin Forerunner 945: I was mostly using a Fenix 5 Plus or Garmin FR935 prior, but I really preferred the size of the FR935 over the Fenix 5 Plus. With the FR945 now having all the features of the Fenix 5 Plus and then some, it’s my go-to now.
Running Headphones: Really old original PowerBeats & Apple AirPods: I don’t tend to run with music a ton, but when I do, it’s using one of these two. Note I did recently buy the Apple PowerBeats Pro wireless ones, but haven’t had a chance to put them through the paces. That’d ideally blend both of them together.
Long Run Hydration: CamelBak Marathoner – I still use this in the summer or on hikes. I also use it sometimes on runs to hold more GPS watches. 🙂
Place to stick stuff on runs: Spibelt – Most runs, I don’t bother with anything.  But for some random runs while traveling, this works as a great place to stick house/car keys, credit cards, or even gels.  I’ve tried a few brands, this one just works the best for me.
Cold Weather Running Top: I don’t have a specific top I use, rather, I tend to layer bits and pieces together. Here’s a post on all my cold weather running thoughts.
Cold Weather Running Tights: Sugoi Midzero tights – These are my favorite.  I’ve only got one pair, and use them religiously in cold weather (below about 42°F).
Cold Weather Running Gloves: $1.00 race expo gloves – That’s it.  It’s easy.  I almost never throw them away, I feel guilty.  So I use a few rotating pairs, all from expos – some even free!  I’ve got a pair of no-brand mittens that I toss on if the weather is super-cold, but like running tops in cold weather, you’d be surprised what your body is fine with once it’s up to speed.  All you folks in Minnesota though shouldn’t adhere to this section.  Just go to the Arctic section of REI instead.
Ice Running: Yaktrax – There’s no better way to run on compact snow and ice, albeit not much of that in Amsterdam most of the time. But they worked great for my runs in the Arctic Circle this past winter. Note that for deeper snow though, they aren’t as useful/necessary. 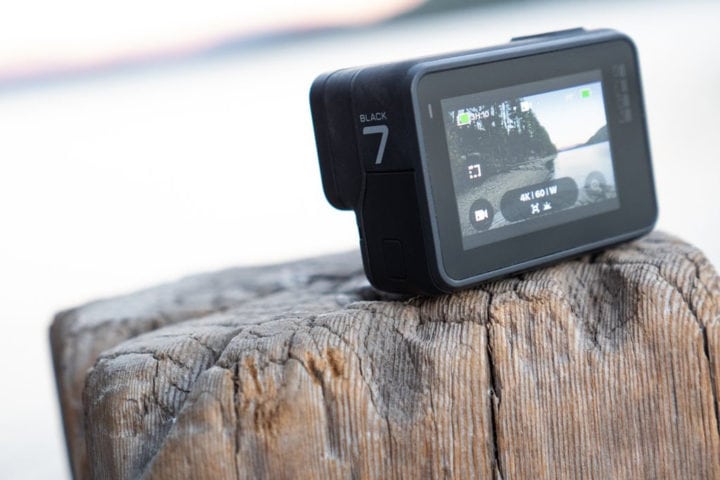 Daily Action Cam: GoPro Hero 7 Black: It was the Hero 6 Black before the Hero 7 came out, but I’ve now got two Hero 7’s in the fleet that I use almost daily – the quality is worth the jump.
GoPro Accessories I use: Complete list here: It’s basically all the accessories I use daily.
Preferred Drone: DJI Mavic Air: While the higher DJI Mavic 2 is great and all, I prefer the ability to use just my phone to control the Mavic Air when I’m traveling or just stuffed in the back of my jersey pocket for a quick pic. I also sometimes use the DJI Spark, but usually opt for the Mavic Air for the bump in quality.
All Other Photography Gear: Be sure to check out my full photography page, which lists all the cameras I use when I’m not swim/bike/running.
Race belt: FuelBelt GelReady Race Belt –  For races, to put your number on for the bike and run.  It also holds gels, though, not as well as I’d like.  Better just as a race belt for the number than a storage platform.
Triathlon suit: 2XU: I got it down in Australia last winter before a race there, but since I’m (yet again) traveling at the moment I don’t quite have access to it.
Transition Bag: I’ve simply moved to a generic REI backpack, especially with many triathlons having ‘clean’ transition areas these days anyway (i.e. point to point races).  As long as it has places to clip stuff on the sides, you can carry a lot with a little creativity.

For long-term readers, you’ll notice that I don’t tend to change the apparel side very much. Most of that stays pretty much the same for years. Things like shoes only change a tiny bit between available variants of the same model. Same goes for other non-tech categories.  I tend to be a person that sticks with what works rather than re-invent the wheel.

Obviously there’s a lot of gear there, but that’s primarily because you’re training for three different sports.  Actually, it’s sorta like 4-5 sports, with openwater swimming and pool swimming both having different requirements (i.e. wetsuits), plus you have specific gear you’d use in triathlon that you don’t use in road cycling (like triathlon suits).

It should be noted that none of the stuff seen above is stuff that I’m trying out for reviews.  Every single item above I’ve bought and use in my normal day to day training.  Obviously, you see me use gear outside of that in testing – but this is what’s left after you peel the testing and reviewing away.

As always, if you would like to support the blog, you can do all of your shopping, even for the most random of items on Amazon. By making your purchases through the provided links you are helping us keep it all going.  Your support is always appreciated around these parts, good luck in your training endeavors!

P.S. –  The Girl’s list is here from last fall as well, for those looking for her favorite items. Enjoy!