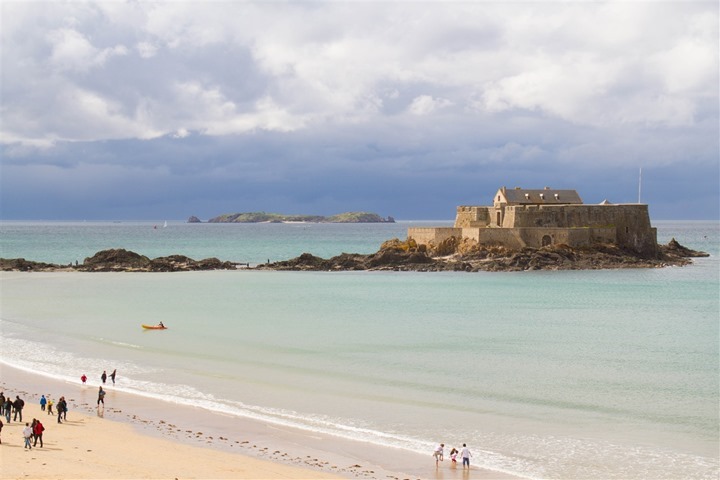 Yes, I swam around a castle. Perhaps technically a fort I suppose, Le Fort La Reine.  But in either case, no, it wasn’t in a moat (or a boat).

When we arrived in Saint-Malo I figured I’d be able to get at least a swim or two in.  After all, it was right on the beach – a nice super-long sandy beach.  Perfect for swimming any distance I pleased.

And then the tide came in.  A lot.

See, the tide here fluctuates roughly 10 meters per day – in height.  Which translates to about 30 feet in vertical elevation.  To put that into perspective, here it is at almost low-tide, and then at almost high tide shot from our hotel window. 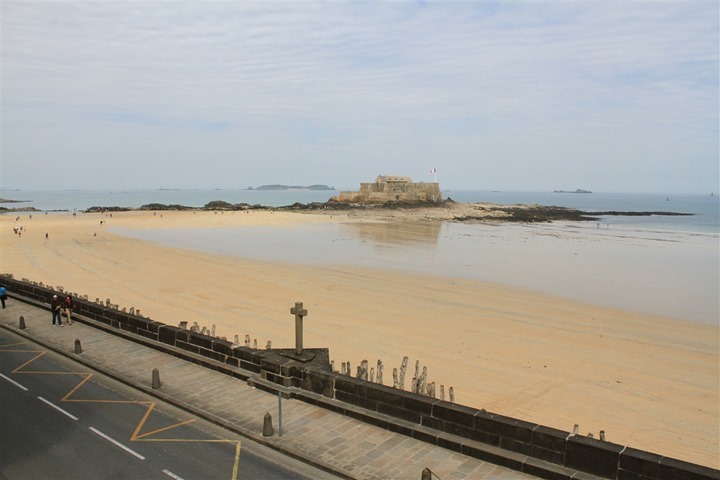 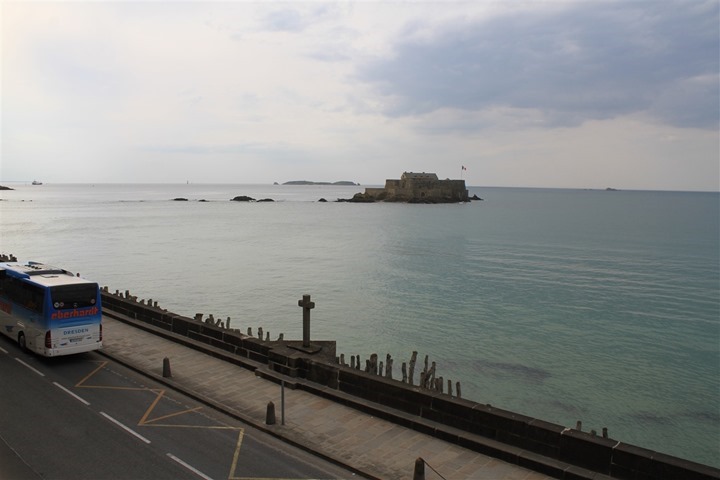 As you can see, swimming around the fort is an impossibility at low tide, so I looked up the tide tables and found that for this weekend high-tide was roughly around 7PM and 7AM each day, and low-tide around 1PM/1AM.  Given I had no desire to wake up at 7AM on our vacation, I went with 7PM instead.

The Girl wasn’t terribly excited about the prospect of me going out swimming around a castle, but I helped a bit in that area by bringing the Safer Swimmer swimming buoy with me. I bought it last summer, and have used it in cases where I wanted to be seen. The whole thing folds up to the size of a pair of jeans and just fits in my wetsuit bag.  In fact, I had put everything together for a post for it, but apparently never wrote/published it.  Hmm…odd. 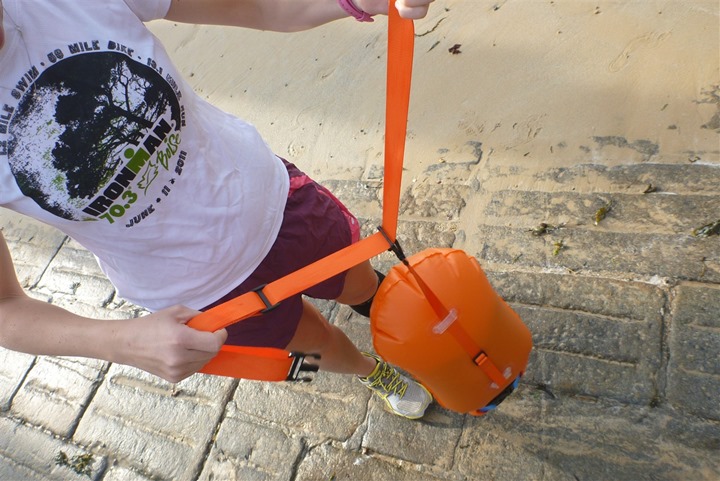 What’s cool about it is that you can store stuff inside it and it’ll keep it dry; I have my sandals in there, and a t-shirt and shorts.  Just a standard waterproof bag that allows you to quickly inflate it.  It then just skims along the surface, with virtually no resistance. 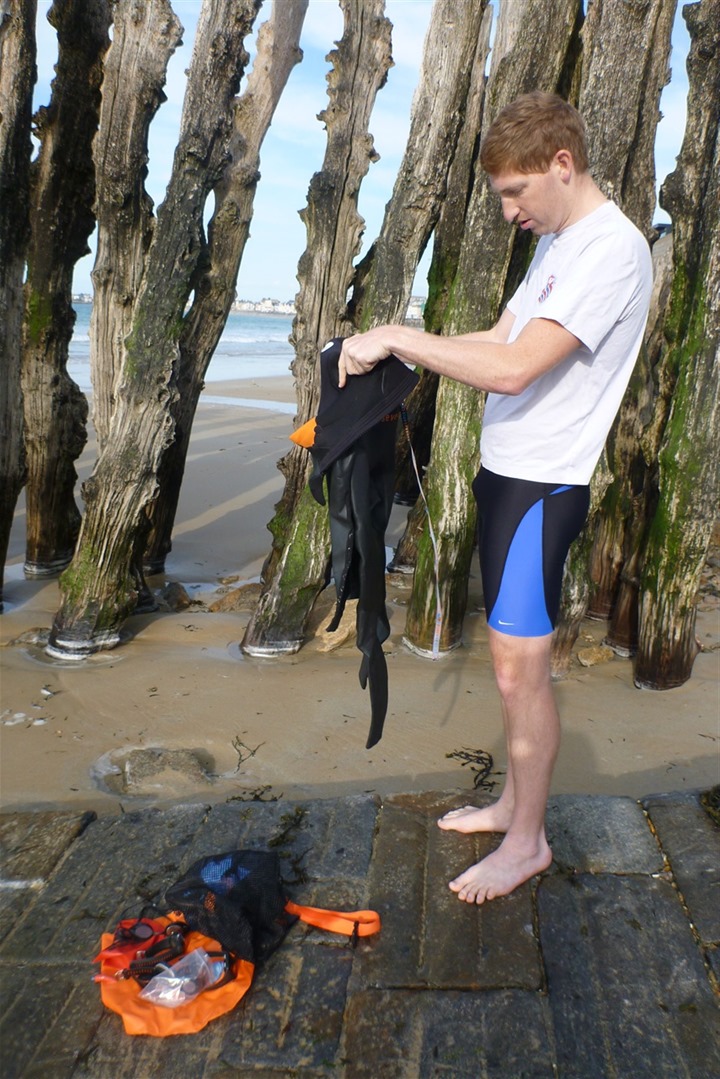 While The Girl was packing up my little bag (I would finish elsewhere, so I wanted my stuff with me), I got some of my test watches ready.  In this case, I was mostly testing out the Bryton Cardio 60 multisport watch for its openwater swim capabilities. 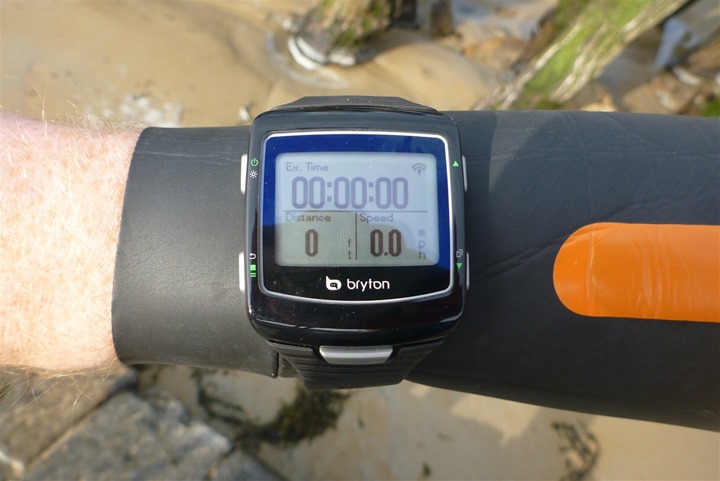 However, because I was testing that, I figured I might as well also get some more data on the Suunto Ambit2 in openwater mode.  And, since I had that, I might as well see how the Garmin FR910XT compares. 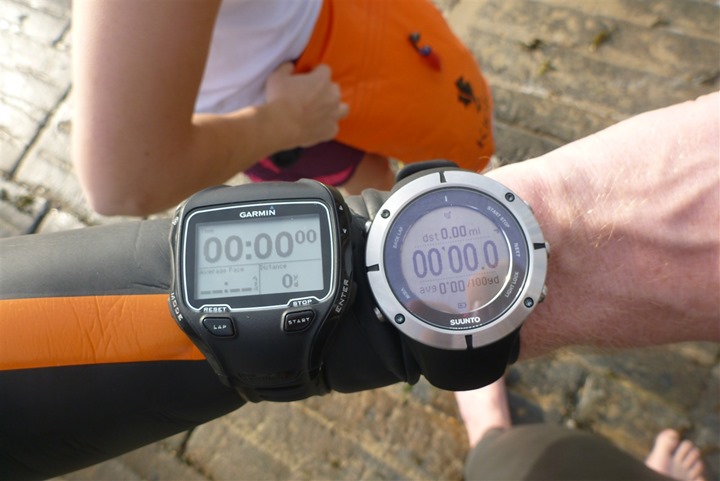 And ya know, since I had all of these on my wrists, I really needed some ‘true’ number as a baseline to compare it to.  So I stashed the only other GPS that I had with me – the Garmin FR610 – and stuck it in a plastic baggie in my swimcap.  It’s technically waterproofed to 1 meter deep for 30 minutes (IPX7), but I really didn’t want to kill it. 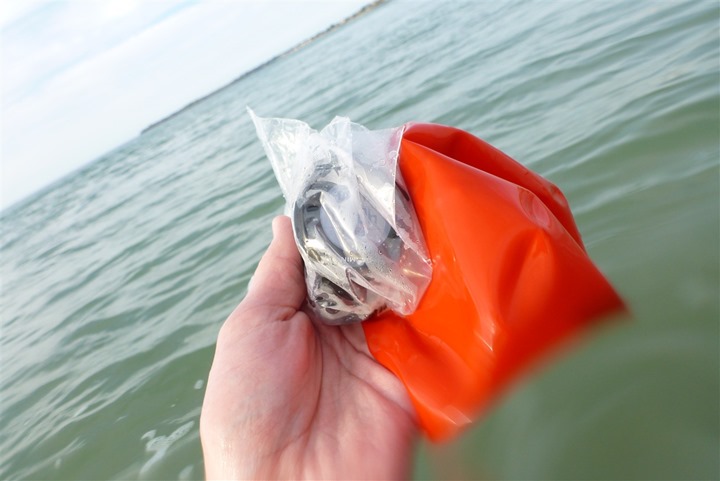 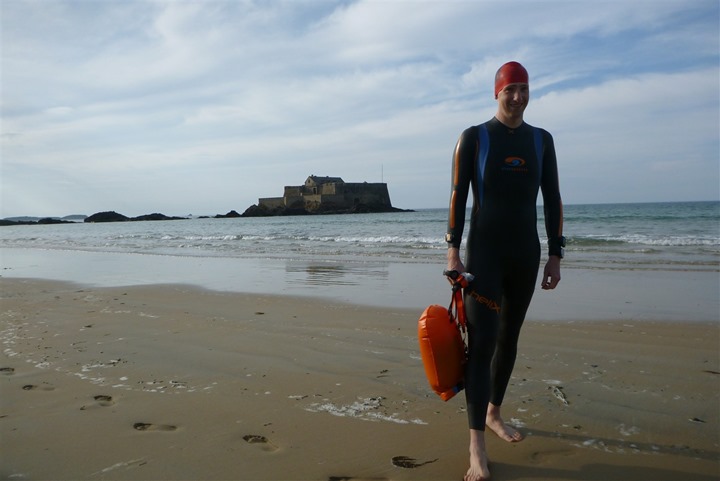 The water was a bit chilly.  I’m not terribly sure how chilly, but certainly not as cold as Seattle two weeks ago.  Maybe 60°F?  Not sure.  Wasn’t exactly warm lake water.

I pretty much just aimed for the fort and kept on sighting my way there.  And sorry for the blurry photos, apparently my photography skills this day lacked the finesse of the day when I got that awesome shot mid-way through the swim at Alcatraz. 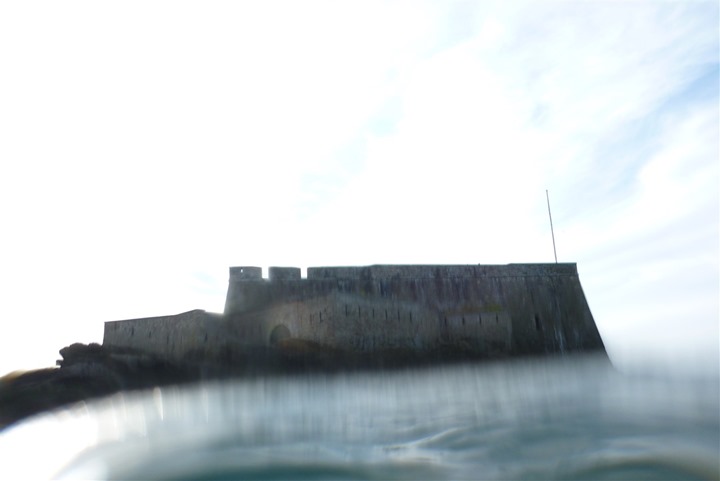 I was able to see my distance pretty easily on all the watches as I went along, just by slightly twisting my wrist while underwater during the glide portion of the stroke.

However, doing so and taking a photo of it exceeded my capabilities.  So, I stopped and took a photo: 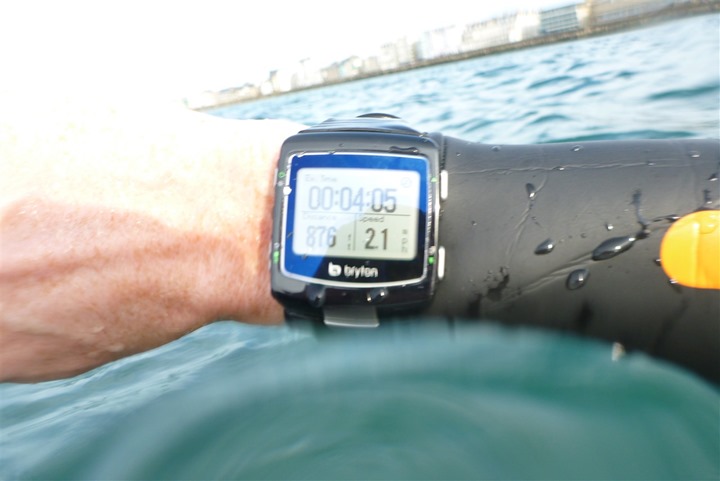 I kept on chugging along, eventually making it out to the backside of the fort.  About the only animals I had seen up until this point were these two seagulls: 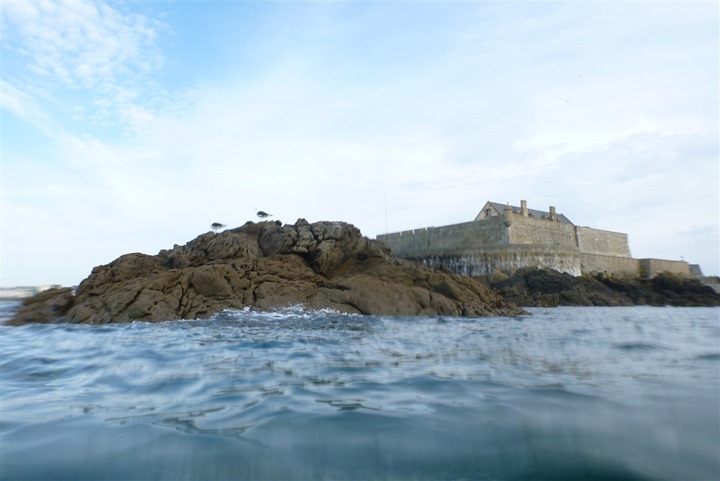 I then turned towards the town again and started working my way back around the fort: 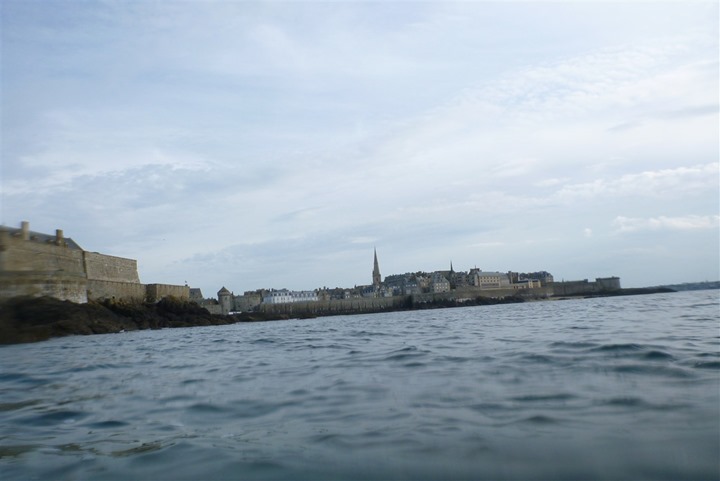 Eventually I reached what is on the below photo about half-way through that rock garden (except at slightly higher tide). 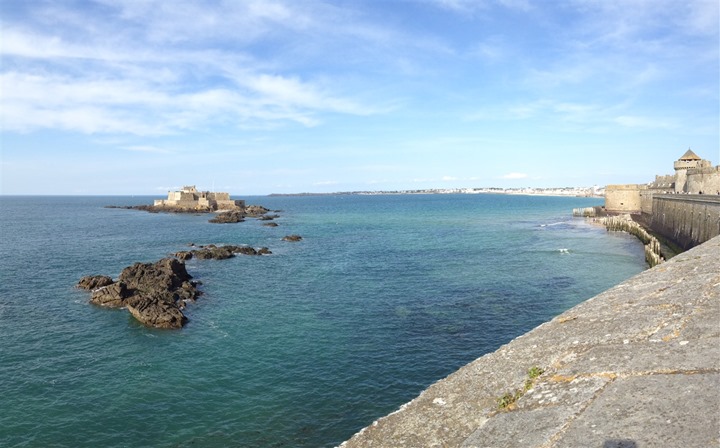 It was roughly there that I noticed this brick wall underwater.  As you can see, the water is actually fairly clear (clearer than my camera makes it look).  In fact, during the entire swim I could easily see the bottom.  In some cases only 6-10 feet below, and in other cases 20-30 feet down. 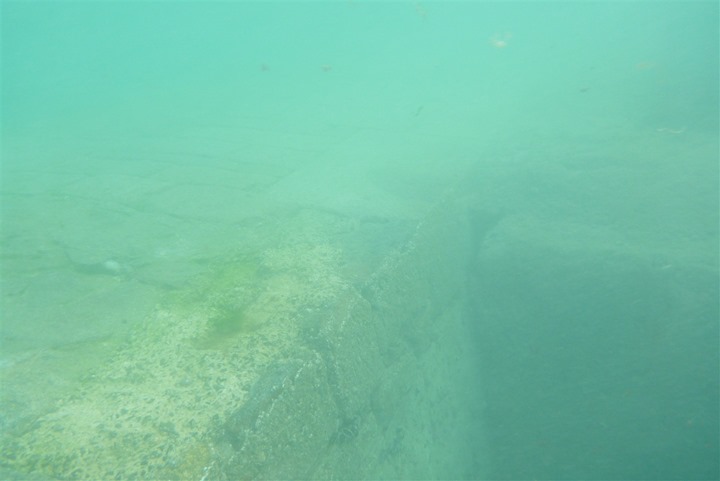 What’s interesting is that during low-tide this wall actually makes for a giant pool, and holds back water like a dam.  You can see this photo I took the next day: 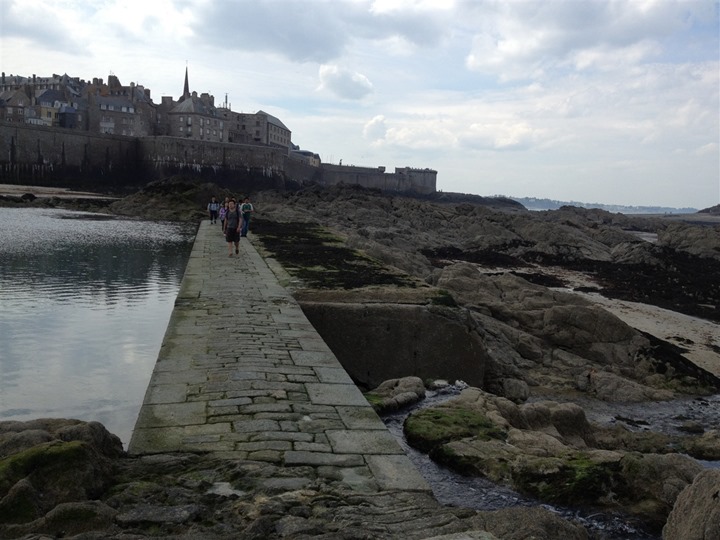 And here in this panorama photo I took looking at the fort, you can see the pool as well.

In fact, shortly after swimming over the wall, things got a bit shallow: 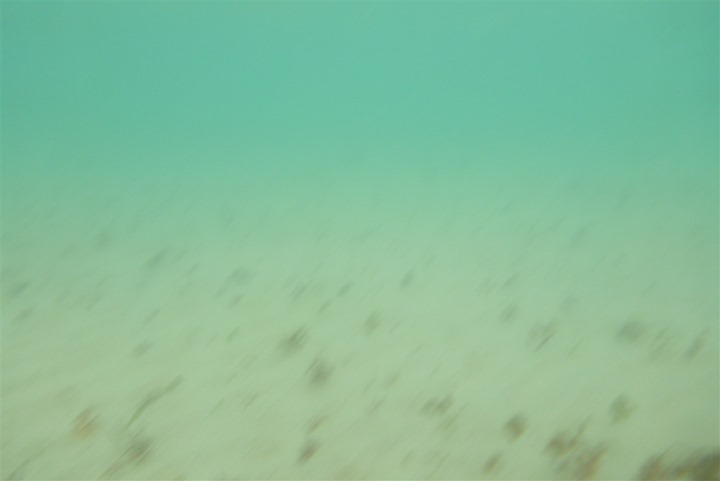 I could easily touch the ground here.  And walking might have been faster (though, I swam). 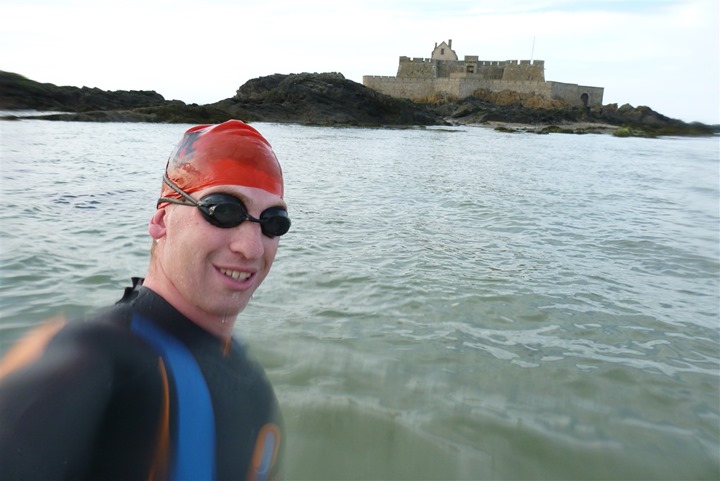 Once I cleared a bit of a sandbank, I was back in business cruising along.  I had put up a camera on our balcony to take a timelapse of my swim.  Because of the sun setting though, everything ended up a bit darker.  But, you can very clearly see the orange buoy behind me as I cut across the frame:

At this point I was just keeping along the shore.  Though, in order to be in deep enough water I had to be out quite a ways from the wall, perhaps a hundred yards or so.  And even then, over just the course of my 40 minute swim the tides went out quite a bit.

In fact, that’s what’s sorta funny about this swim.  Because of the vast differences in tidal patterns, the water also looks dramatically different in the satellite imagery than it did during my swim.  Despite how it may appear, I really did swim this entire length – no walking on the beach: 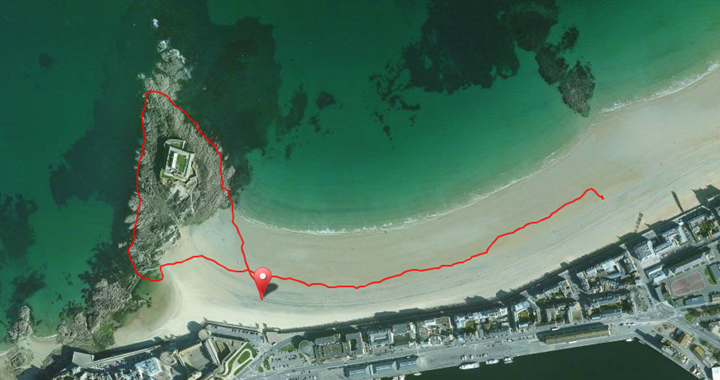 Once all was said and done, how did the distances look?  Well, here’s the results: 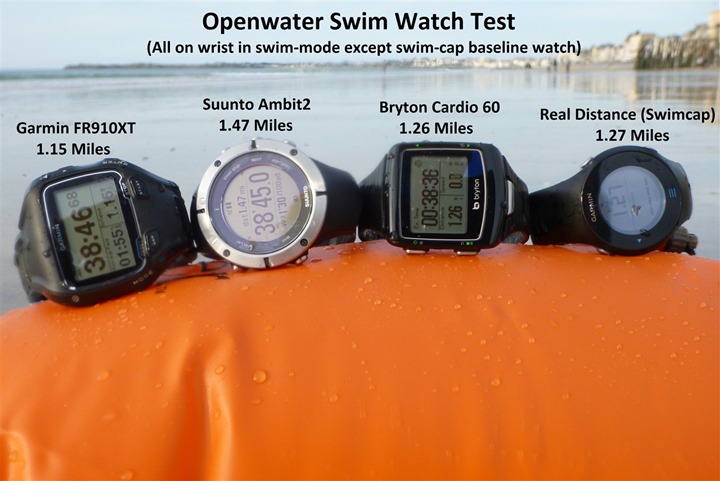 The above photo appeared to cause much confusion on Facebook, for reasons that are still slightly unclear to me.  So here’s the play-by-play.

1) I wore the Garmin FR610 in my swimcap, this is tried and true for getting the most accurate data on a swim.

2) All the other watches were worn on my wrists.

3) The results of which are:

4) Thus, in this particular circumstance the Bryton unit was the most accurate.

Obviously, that accuracy may change from swim to swim. We’ll see.  I didn’t wear the Garmin Swim because it’s a pool-only watch.  All of the above units on my wrist can capture stroke/distance information while outside using GPS in openwater.  The FR910XT and Ambit2 can also capture pool information, but the Bryton unit cannot.  Make sense?  Good.

Oh, and here’s The Girl waiting for me post-swim: 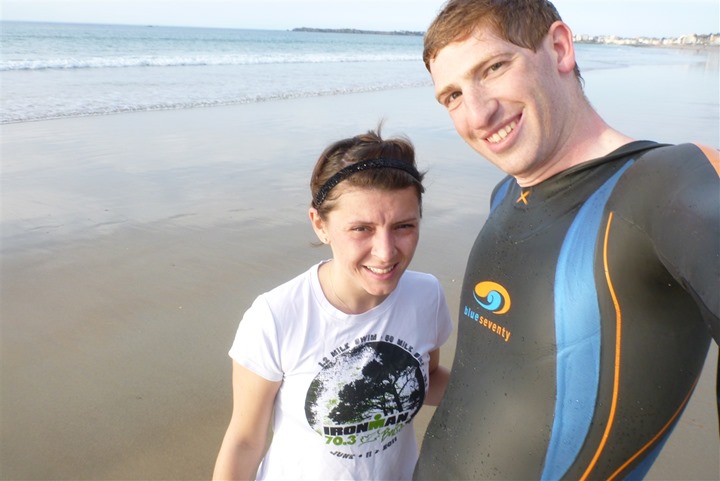 It is a bit impressive how quickly the tide rises and falls.  Just about an hour later, here it is on its way back down again at sunset: 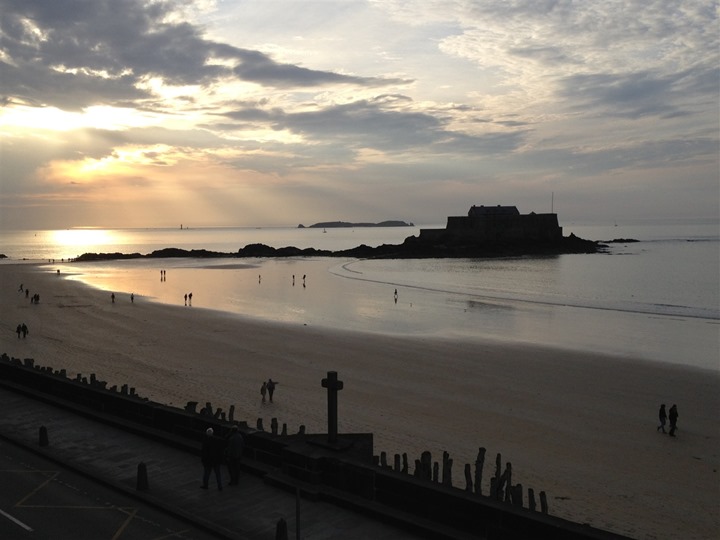 The next day I did decide to go swim to a different fort, this one a bit further out across a bit of a different channel.  You can see it up on top of the island way off in the distance. 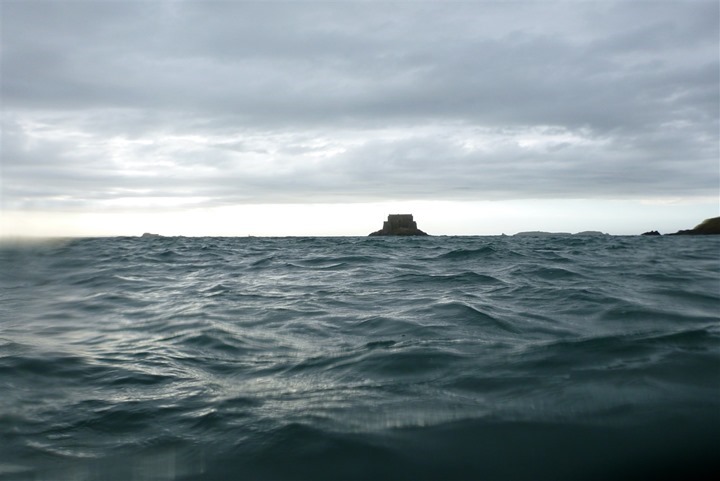 Unfortunately, it was just after a storm system swept through and I got out a ways but the swells were pretty ugly mid-way through the channel (small Zodiac boats were actually catching enough air off the waves to leave the water), pretty significantly reducing my speed and making what would have been a 35 minute swim look closer to about an hour or so, ignoring the tides that would have been going out then (which would have made it even longer).  So, I simply decided to play it safe and head back in.

Here I am…walking home in my wetsuit (I think the air temperature and wind were colder than the water!).  I put on a t-shirt in an attempt to make it look slightly normal as I walked through the walled city.  Obviously, I probably didn’t succeed as I still got some stares. 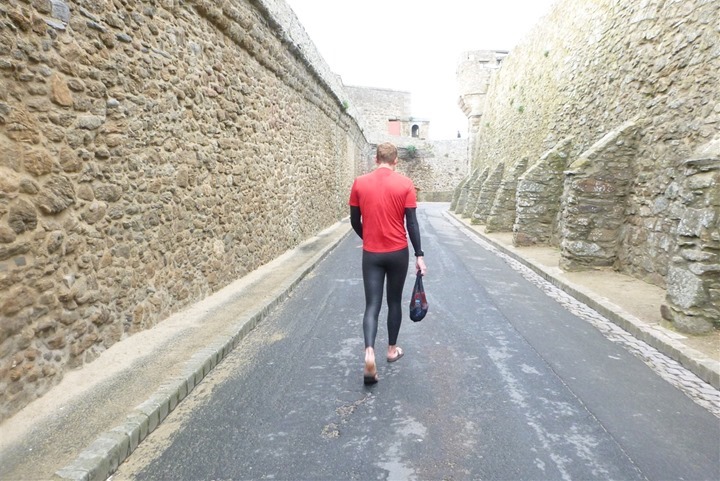 With that, thanks for reading!  Tomorrow I’ll dive into the rest of our road trip in the region from a non sports standpoint.  Have a great weekend!