The last few days, and for the next number of days, I’m attending a slew of meetings in Greece.  My schedule is pretty packed from morning till night, but today I had a brief break around lunchtime for precisely one hour – which afforded me just barely enough time to swim across a bit of a bay and back.

The hotel the meetings are being held at is out on a bit of a thin peninsula, stretching out into the Mediterranean with crystal clear water on all sites.  There’s little bits of sandy beach, but mostly just areas carved out to put a beach chair down.  So as soon as my one hour clock started I zipped back to the room (.33 miles away, I measured via GPS – it’s a very spread out hotel), and then backtracked down to one of the many small beaches around the resort to start from. 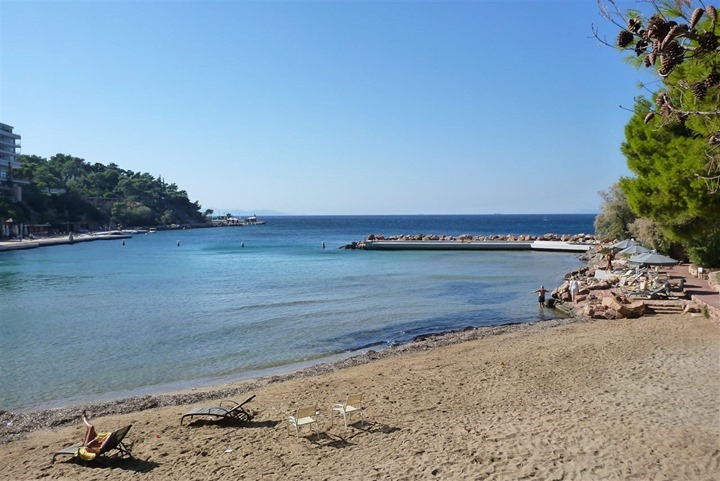 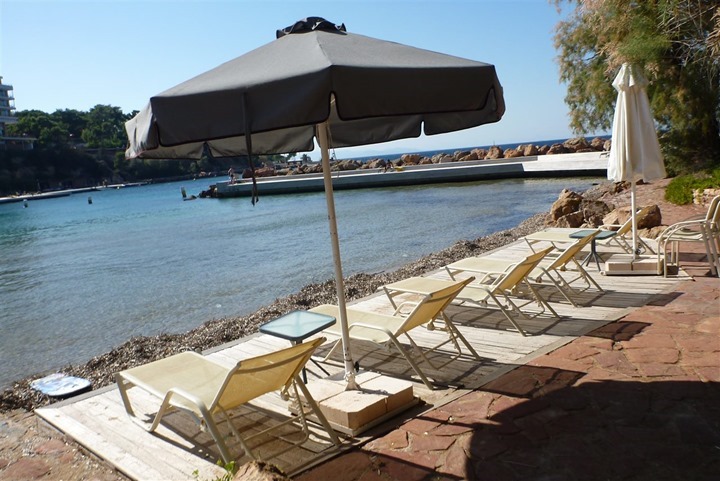 For today my goal was really just a 30-minute swim.  No particular effort or intensity.  Simply really anything other than running.  My training schedule right now has entirely dropped swimming otherwise, and I’m purely just doing a ton of running with bikes mixed in between mainly to keep me doing something on the days in between that doesn’t involve pounding on the legs.

So given that, I could pretty much just play around intensity wise and thus also play around with different devices.  I was curious, for example, how the semi-recent Suunto Ambit 2/2s firmware update addressing some of the openwater swim accuracy pieces would look since my initial review.  Further, I also wanted to take the FR220 along for the ride, simply because many folks ask what the data looks like on the wrist.  Of course I already know the data will look less awesome because it’s not designed to be swam with from a measurement standpoint (waterproofing is solid though).  Nonetheless, folks are curious, so now I’ll have an answer for the final review.  The FR610 acts as my standard swimcap method baseline, giving me true distance for the swim. 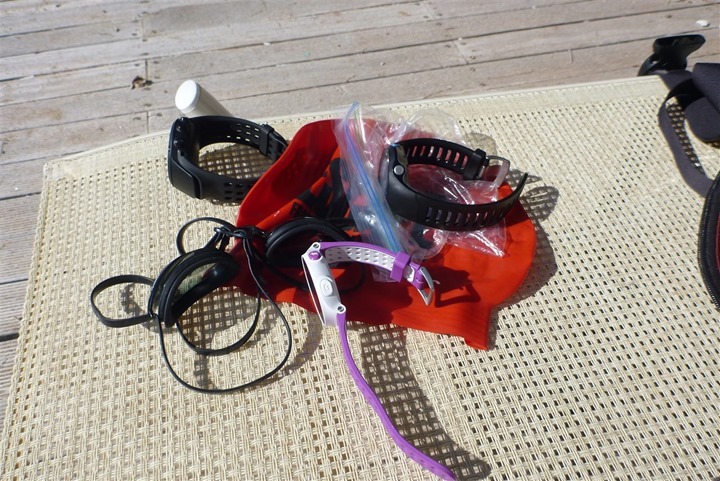 With that, into the water I went.  After all, I really only had 30 minutes of swim time, plus time to run back to the room (called ‘bungalows’ here), shower, and then back to the main conference area. 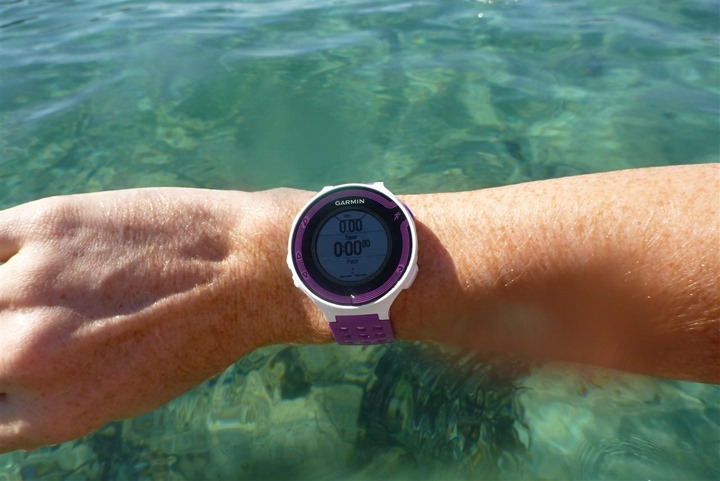 The initial little mini-bay was shallow, but it quickly dropped off as I rounded the bend of the dock area.  The water was incredibly clear, though it’s hard to see that in some of the photos.

My main ‘line’ was a series of buoys all the way across the bay.  You can see them in the photo at the top.  This was what protected the swimming area from the boating area, and made for an easy path to follow. 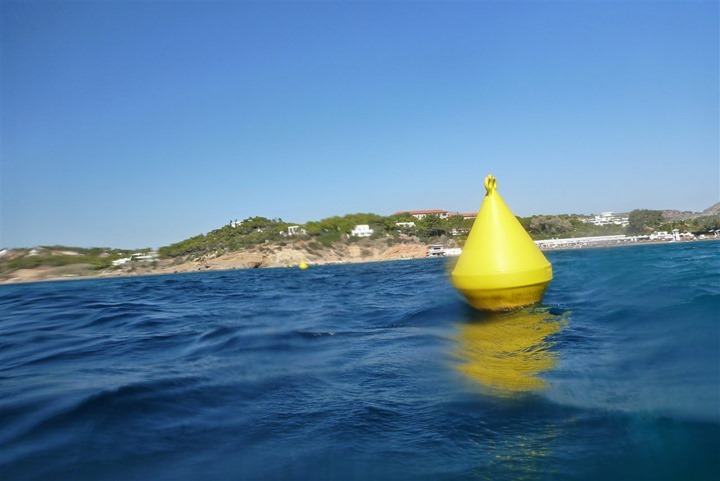 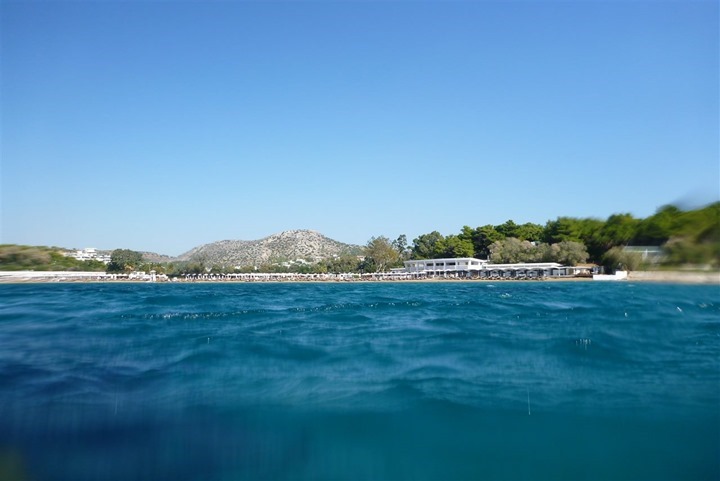 Eventually the buoys changed color temporarily.  I believe this was to mark a short ‘road’ for boats to get to the beach. 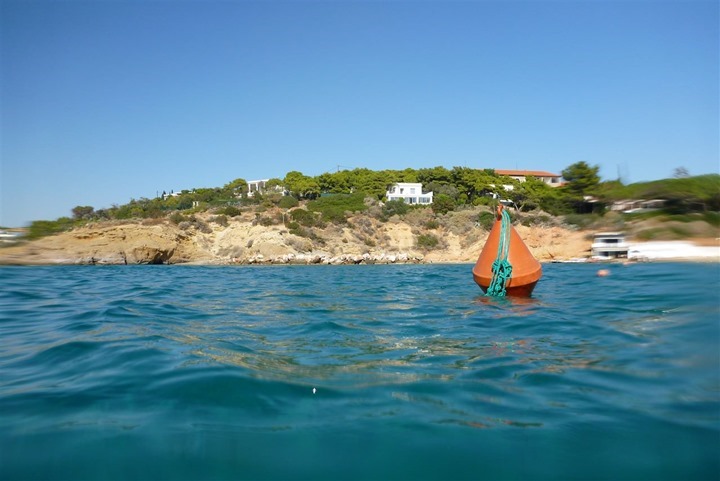 At just before the 15-minute marker the bottom quickly came up towards the surface: 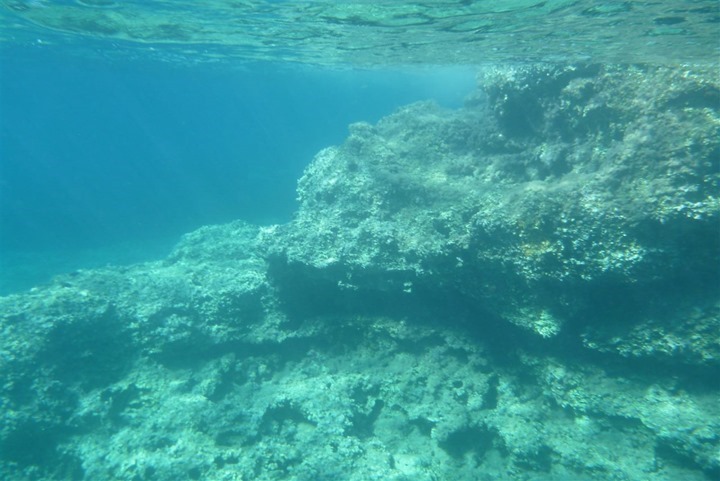 And, sure enough, I had reached shore: 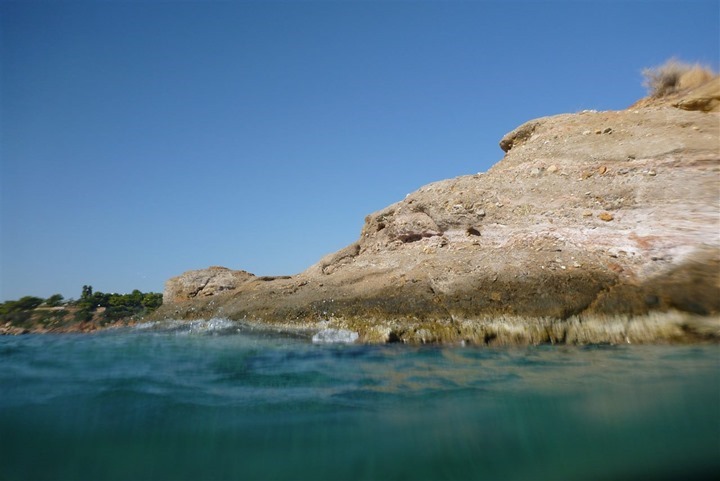 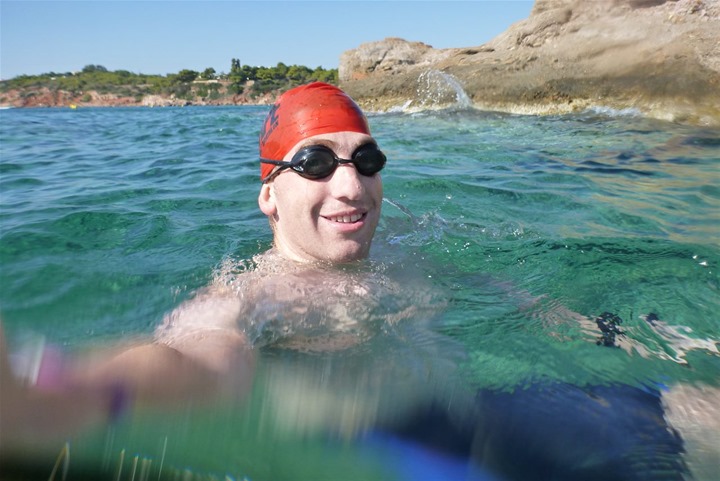 Nearby on a beach was a lone woman sunbathing…albeit without clothes.  She’s hidden behind the rock though from this view. 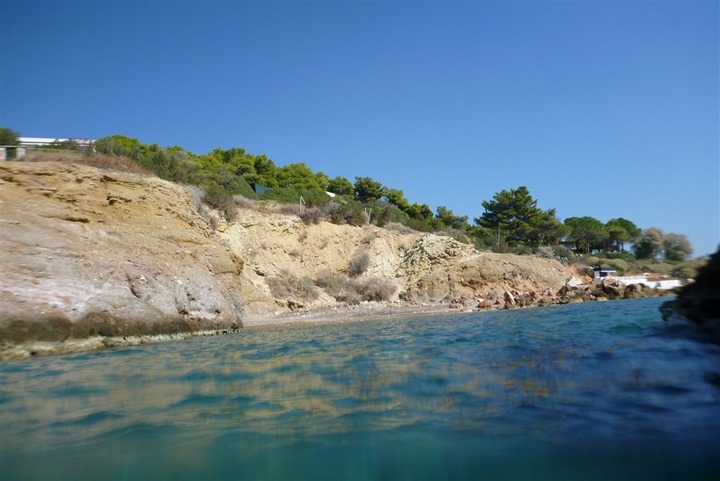 Then, I turned around and headed back towards the hotel across the bay.  Looking to the left as I made my way across you can see the long beach with tons of beach chairs on it.  This isn’t part of the hotel, but butts up against it. 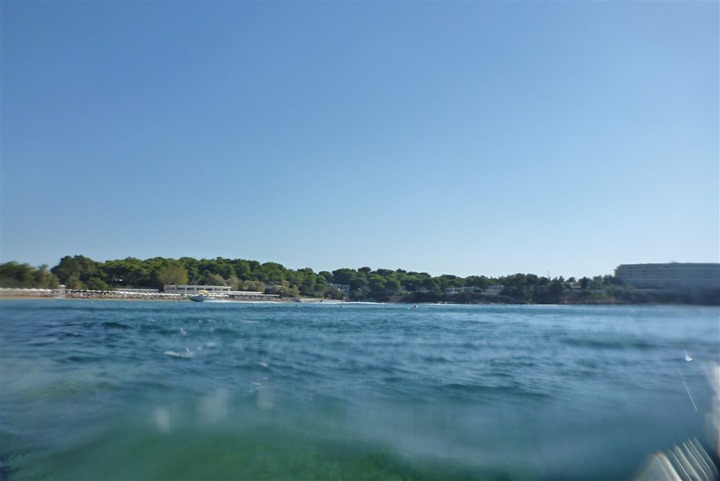 Shortly after passing the beach I noticed something large underwater out of the corner of my eye.  Given the distance I was from the beach I assumed it was some oversized fish (and hopefully not one of my friends).  Turns out, it was just a woman out floating around.  She’s actually quite some distance from me – perhaps 30 meters/yards or so.  But just goes to show how clear the water is. 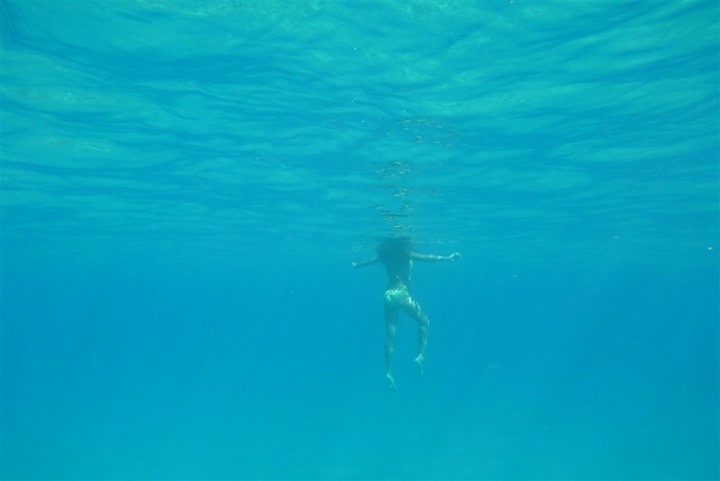 In fact while she wasn’t out doing a swimming workout, many people are/were.  From the conference room windows I’d watch swimmers going back and forth across the bay from dawn till dusk.

As I was following my buoy trail I find one slightly misplaced buoy: 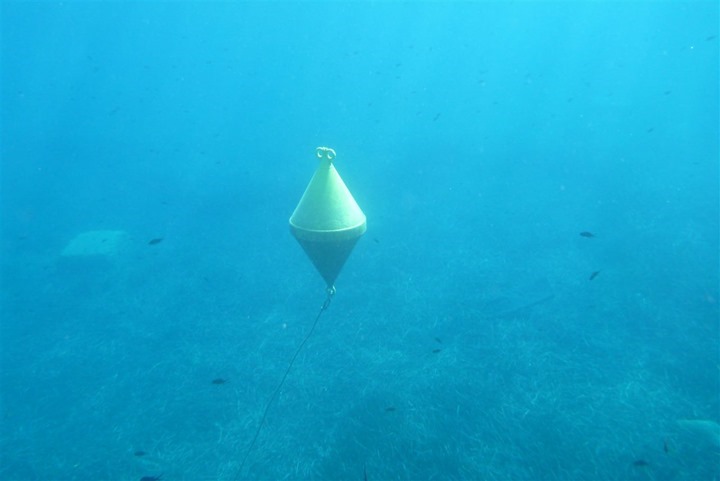 Soon, I was back within view of the hotel.  I swam much faster on the return than on the outbound.  Mostly because I stopped a bit more on the way out. 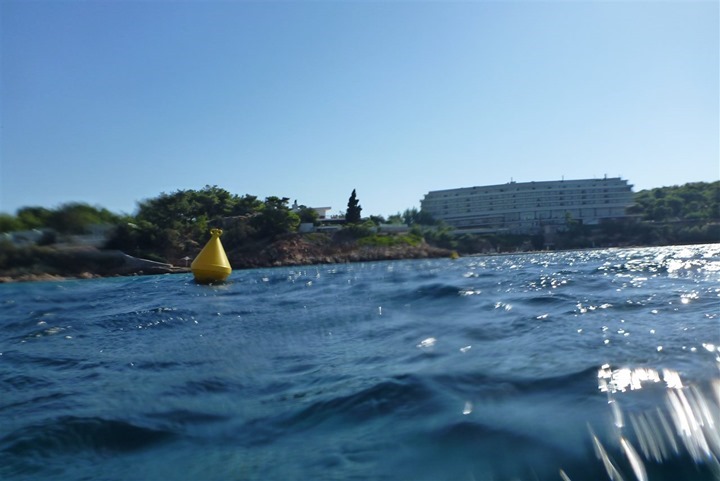 And then, back in shallow enough water to stand up. 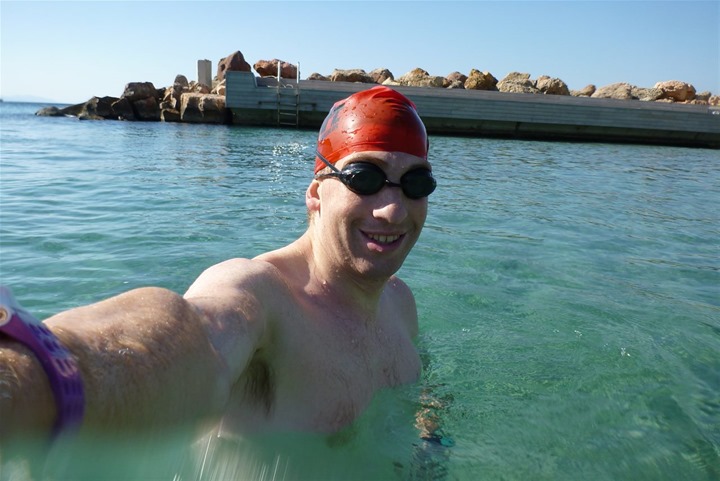 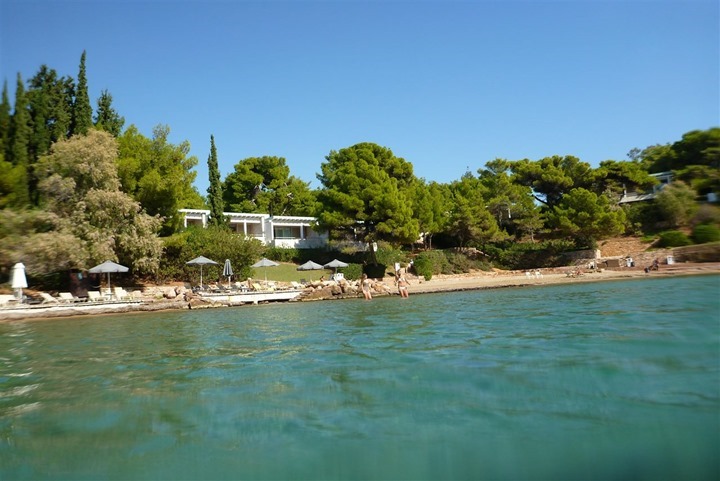 Looking at the final distance, the Ambit 2 and the reference swimcap FR610 were nearly spot-on, a very nice improvement over the past.  Of course, one test can also be dumb luck, so I’ll be playing with it more over the next few days.  The FR220 measured a much more jagged path, as expected (it was on my wrist).  This is normal because it’s losing satellite coverage each time it goes under the water and doesn’t have any algorithms in it to compensate (like the FR910XT has).

Obviously, that’s a pretty slow pace for the distance. But I didn’t bother to stop the timer for pictures, etc…  It only took about 10 minutes to get back, so there’s probably about 6-7 minutes of goofing around on there. 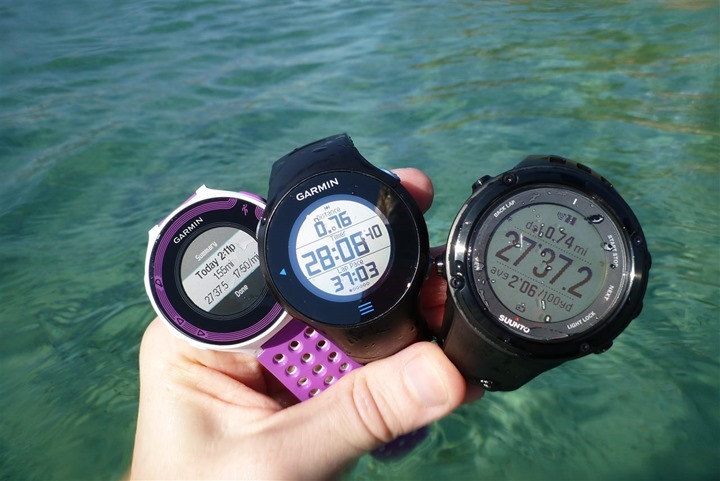 Back up to the empty beach I went to grab my flip-flops, backpack and run back to the room. 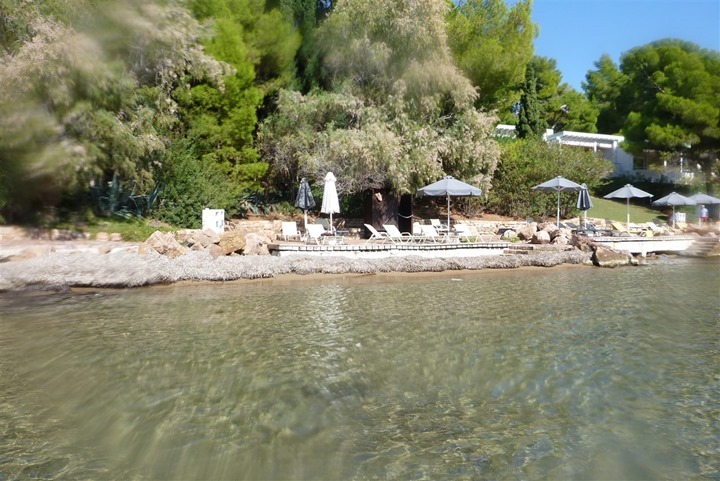 Here’s the view as I walked back, looking out over where I swam: 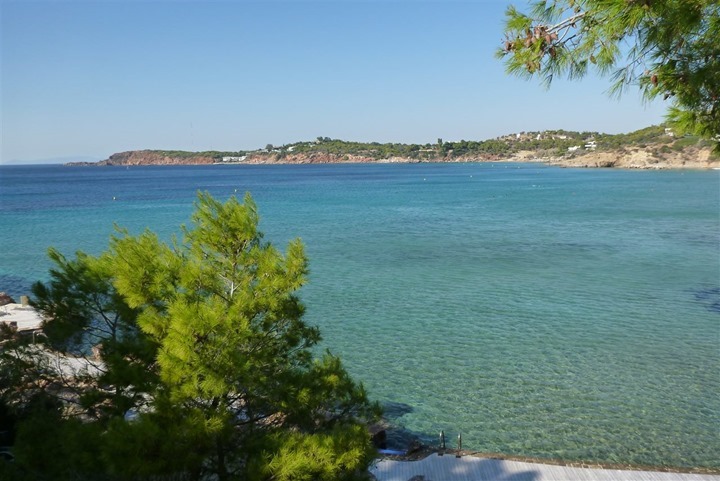 And here’s the GPS track from the swimcap reference FR610: 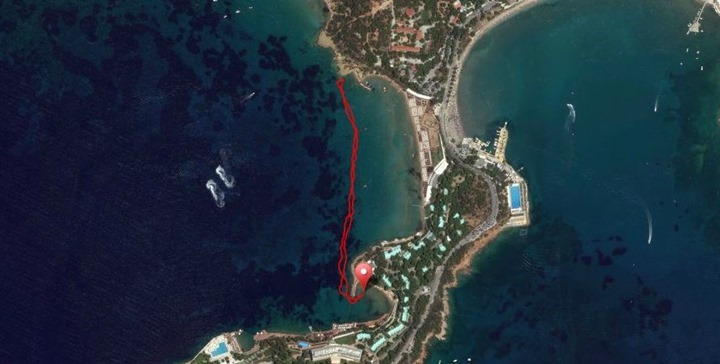 I forgot my charging cable on the Suunto Ambit 2, so I’ll have to wait till the weekend when The Girl joins me to get that data off.

Meanwhile, about 6 minutes later I was rushing back to the meetings.  Nope…no sign at all that I was out swimming with goggles on… 😉 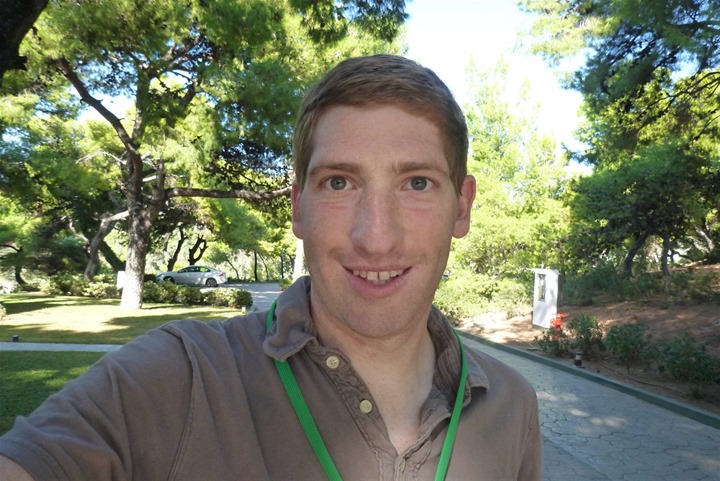 More to come from the rest of my Greek adventures…

– Hanging out in a Greek Olympic Stadium (a really old one)