A really cold swim in Seattle

It should first and foremost be pointed out that I don’t particularly enjoy openwater swims where the temperature of the water is colder than that of an iced beverage.  Yet somehow, I keep getting myself into these situations.

Obviously the solution is to just move to a small island in a tropical climate – thus guaranteeing that even the polar bear swims are at bathwater temperatures.

But, until then…I’m stuck with scenarios like Tuesday night’s swim.  Though, at least it wasn’t raining. 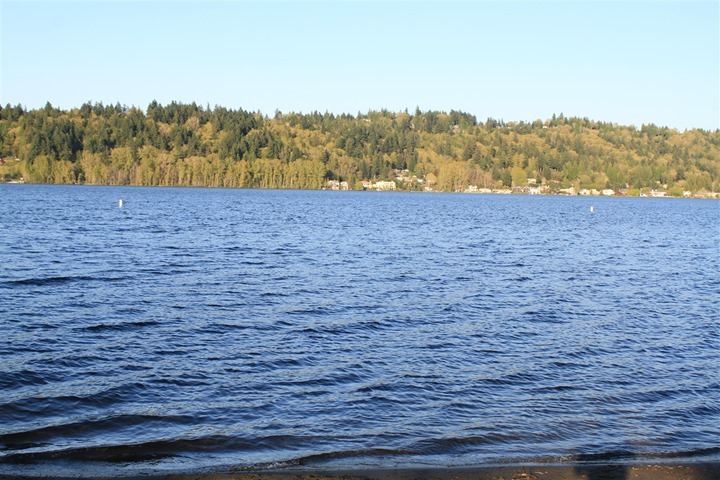 I had sent out an e-mail to a bunch of co-workers in the Seattle area asking about the water temperature and what my options were for the warmest possible puddle of water.  After they all finished laughing at me, three suckers volunteers actually came forward to swim with me.  They couched it as wanting to be there from a safety standpoint…but I knew better: They just wanted to be there to heckle me. 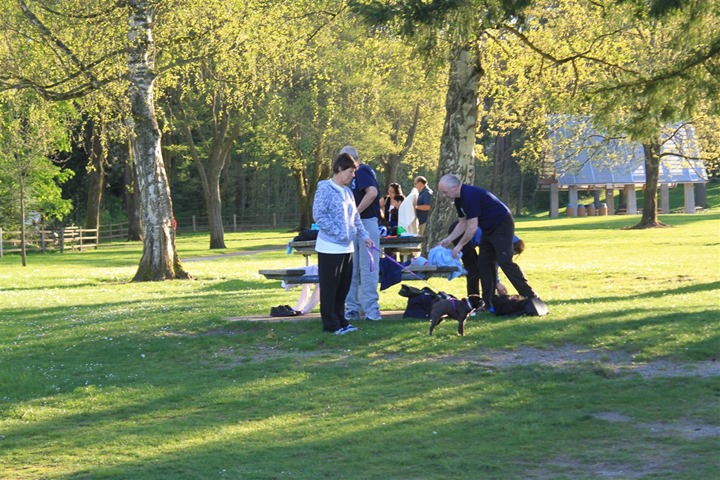 However, upon arriving at the lake – they were actually ready to go with wetsuits in hand, and even already half-on.  Which is about the same state of dress I was in, half-on wetsuit. As I joked on Facebook – this is my business casual: 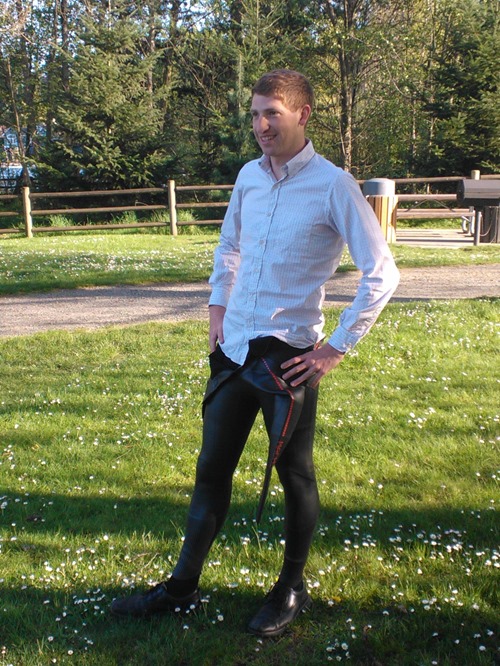 Btw, this isn’t because I was hoping to make a funny photo out of it. I simply didn’t think to bring anything else with me to work that day besides my wetsuit and swimsuit.  Never occurred to me to bring a pair of flip flops or t-shirt for pre/post-swim. 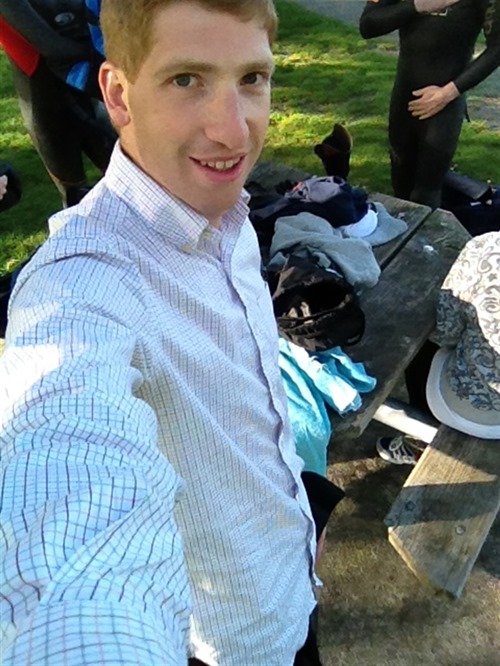 Unlike my Alcatraz or the Boise 70.3 swims, I did take a few minutes to get into the water and try to acclimate to it as much as possible.  This is both for safety reasons, as well as sanity reasons.  With the water temperature at 49*F/9*C (according to the buoy sitting in the sunny portion of the lake), things were a bit chilly. 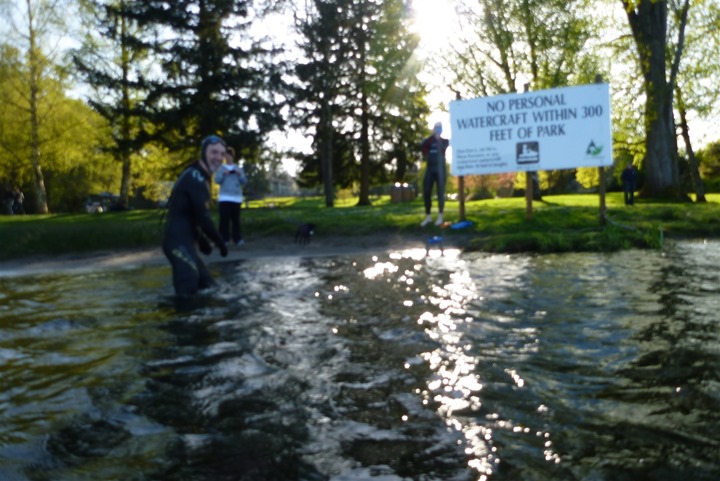 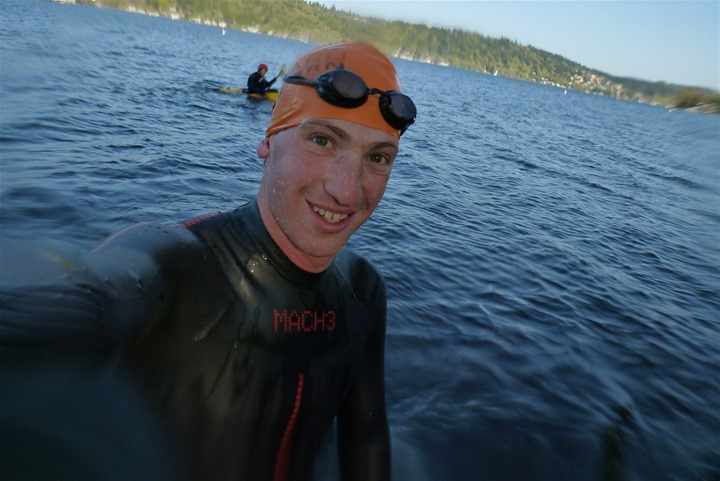 Most of this acclimation time was spent trying to keep my face in the water.  The wetsuit kept me just fine temperature wise, and while the others smartly brought swim gloves and booties – I did not, but the water didn’t bother me too much there.  It was mostly just how flipping cold it was on my face.  Near-instant headaches.

But after a few minutes and a few false-starts to swim, I finally got things up to speed and headed on out.

Once ‘underway’ and once I got to the first buoy, it actually wasn’t that bad at all.  You can see the first buoy off to the left out in the distance.  The second buoy is to the right, and then quite a ways later is the 3rd and 4th buoys (out of frame). 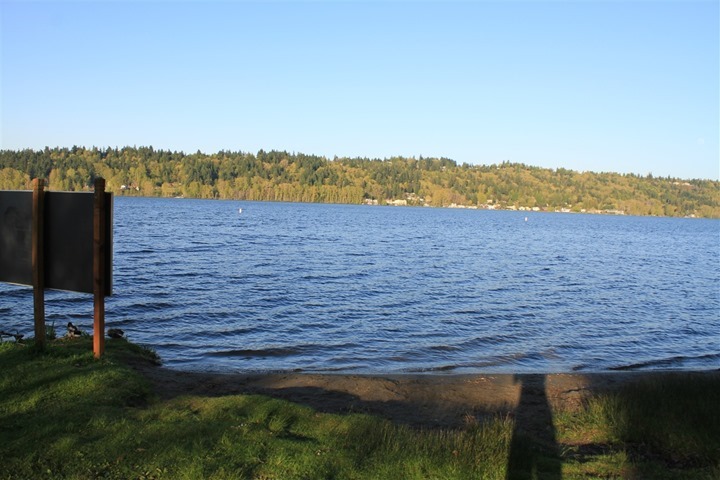 From the first buoy I did a single loop around the ‘course’, which is four buoys and about 4/10ths of a mile in total.  The FR910XT recorded route came in at .45 miles, or just a touch long.  I’d guess that while my line wasn’t perfect, it was probably closer to .42-.43.  If you zoom in on that Garmin Connect activity you can see the buoys.  In my case, I physically touched each buoy, so the route is more of an estimate than absolute reality. 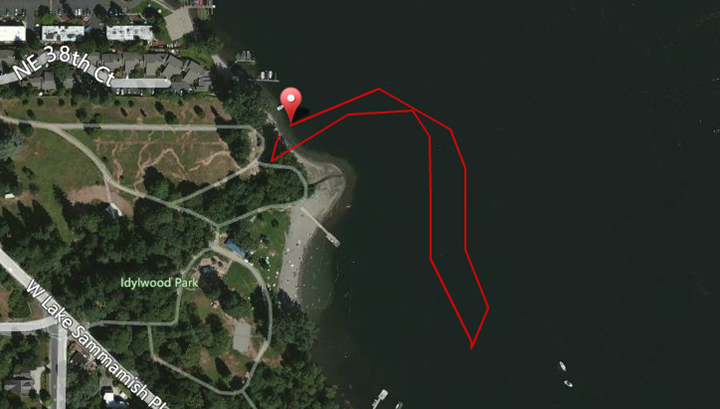 That was really all I was going to be able to fit in. But, I accomplished what I was looking for – so I was happy there. 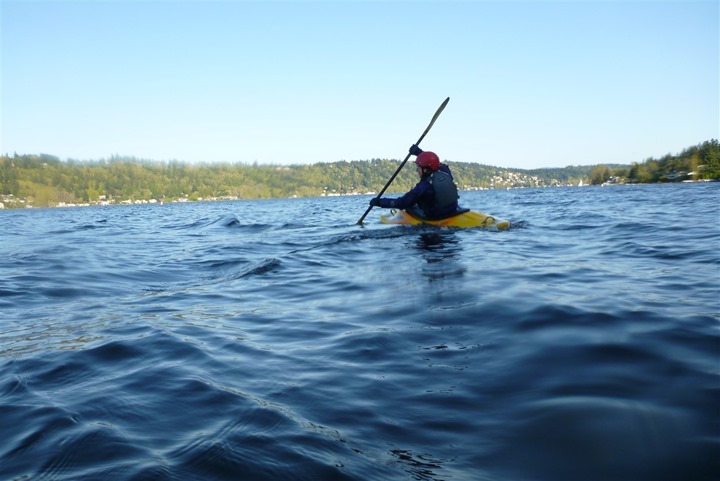 And also happy that I had a few co-workers (and even a kayaker) that were willing to come out and watch over.

Now, swimming wasn’t the only activity I did during my short three-day trip. In fact, each day I managed to fit in a workout.  On Monday I got in a nice 1hr and 30m ride.  I again had e-mailed out to a group of co-workers looking to see if anyone had a spare PowerTap wheel to borrow.  Sure enough, 6 people responded with offers.  Bingo!

I then attached said wheel to my Dad’s bike, and I was good to go!

My route would take me from Marymoor Park along the Burke Gilman trail eventually alongside Lake Washington. For those living in the Seattle area (I was born there), this is pretty much one of the region’s staples when it comes to running/walking/cycling trails. 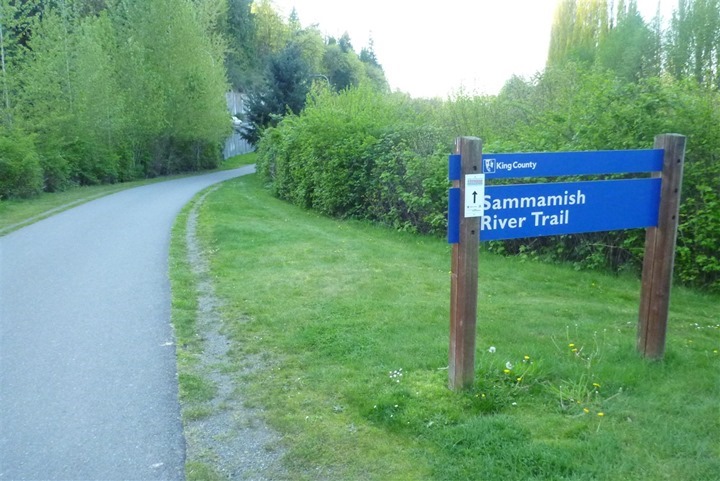 The weather was quite nice – as it was for my entire stay.  Sunny and half-way between sorta warm and cool.  Temperature wise it worked. 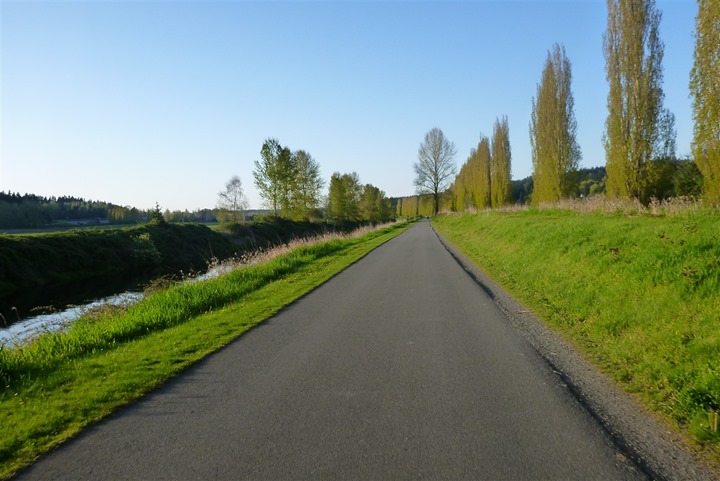 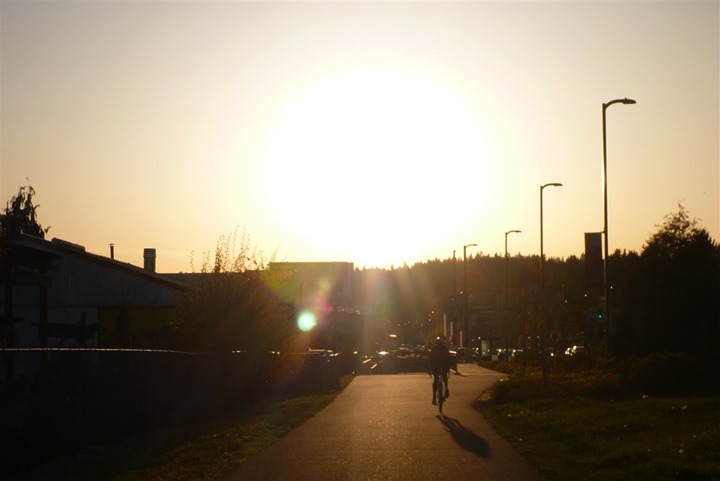 I was technically pacing the workout for a Z2 heart rate, but it worked out that 250w on the dot was about where that put me.  So I just focused on pacing by power instead, assuming it didn’t take me out of zone.  Overall, that worked quite well.  I lost a few watts on the average towards the end with a few ‘stops’ where I had to navigate tight corners and bridges.  But still, I was happy with it – and the normalized power was 251w. 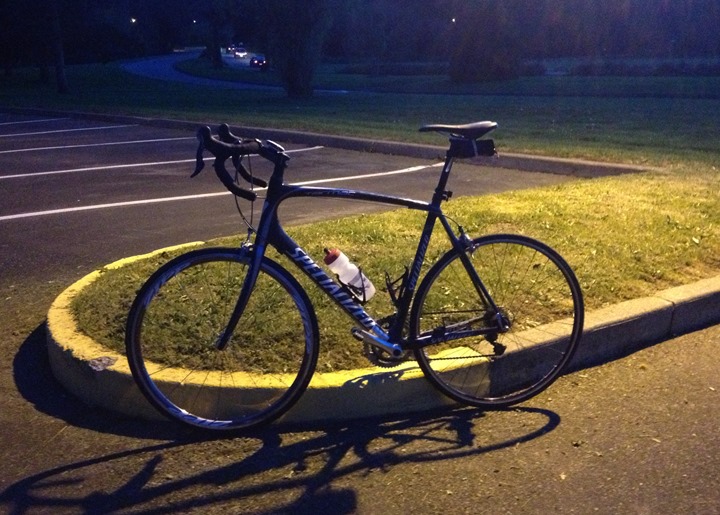 And finally, Wednesday morning prior to a day of work and my redeye flight back to Europe I’d do a bit of a brick.  I’d use my Dad’s bike and then head outside and run.

While I had sent him one of the trainers I bought and don’t use (Tacx Bushido) last year, I ended up using the Wahoo KICKR.  This was the unit I picked up to replace the media-trial one I sent back.  As most of you know, I send back all units after I’m done reviewing them, but I also usually re-buy the units to help out with questions on posts/etc…

In any case, it was way cheaper to ship the KICKR to Seattle at my parents house, and then me take it onboard the plane (free as checked bag), than to ship it to Paris.  Thus, KICKR: 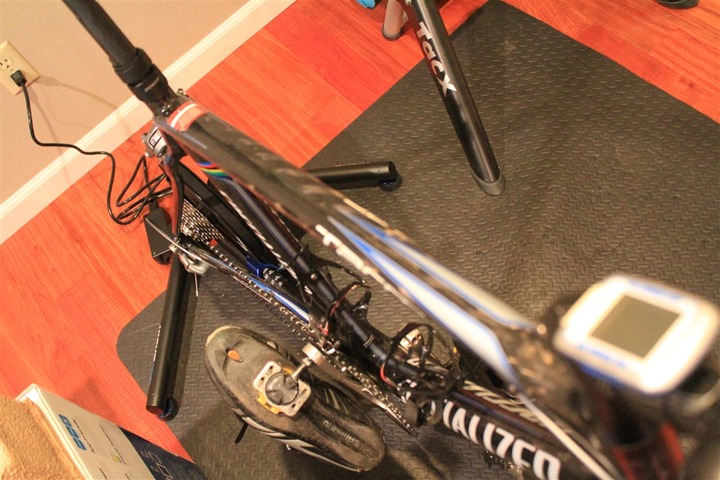 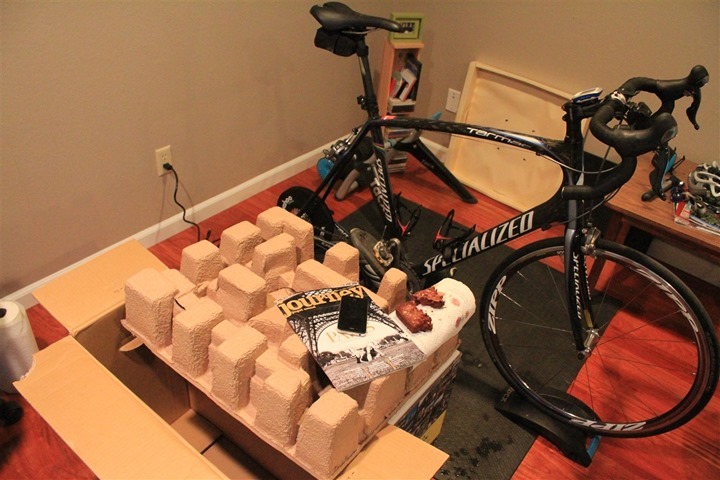 My Mom had made them the night before, and they seemed like perfect nutrition for my morning workout.  After all, if companies like Clif Bar make a brownie-flavored Clif Bar, wouldn’t the actual brownie be more organic?  No?

At any rate, the bike went fine.  It was short, only about 30ish or so minutes, just building in intensity.

Then it was out into the relatively cool air for the run.  Had I not been running hard, I would have been underdressed in shorts/t-shirt.  But given my run was fairly hard, there was no problems there. 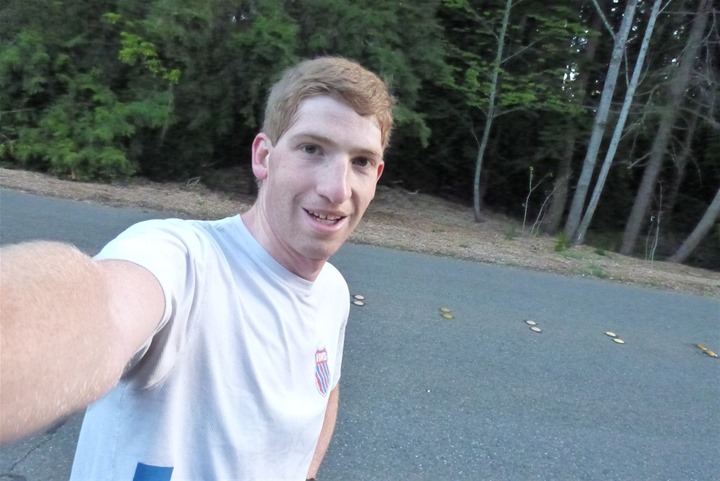 I was doing a few sets at higher intensity heart rates, alternating back and forth twice within each set before the rest portion of the interval.  I ended up just doing a lot of loops on the roads around my old elementary school, as that was the flattest section I had available to me.  Everything else is otherwise fairly hilly and would have made it difficult to see the impact set to set (without using NGP – Normalized Graded Pace). 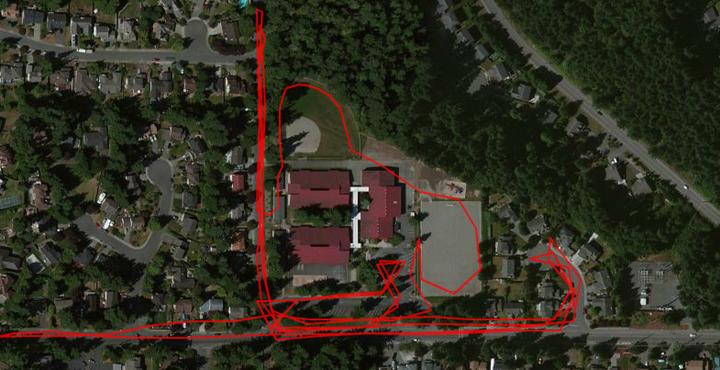 My finishing sets were at 6/mins/mile and just slightly faster than that – so I was certainly happy there.

As I kicked into the cooldown near my parents house, I swung over to the bluff overlooking the sound (Puget Sound) to snap a quick picture of the Olympic Mountains.  Perfect morning! 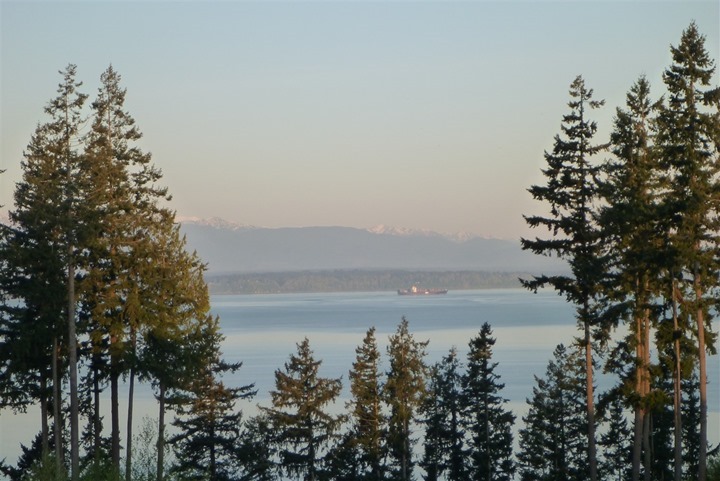 With that I headed to work, then the airport, then flew to London and am now on my last flight to Paris.  Home! 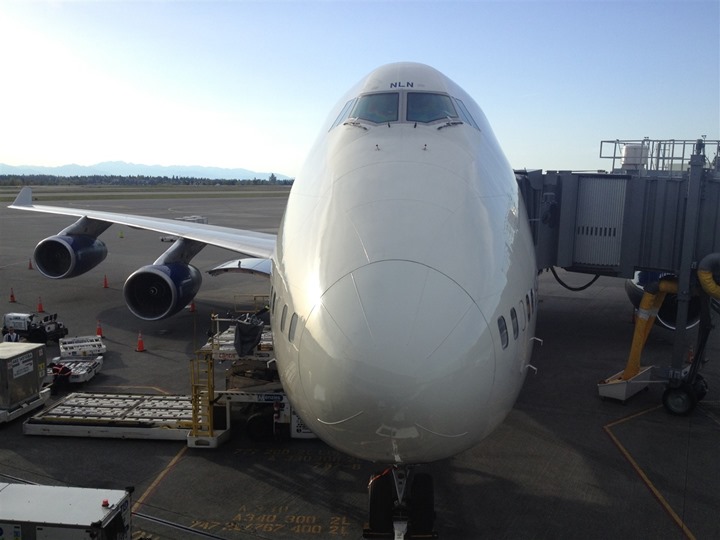 (Side note for those curious: I’ve got three posts where virtually everything is done, but am waiting data from people outside of my control.  These would be the Stages Power Meter Update, the Aero HC Bottle System, and then the Aerodynamics Post.  As soon as I have said data, said post will be posted.  Sorry for the delay!)