Over the last few weeks my cell phone has been acting a wee bit slow when I go to take photos.  After a bit of searching I found that it may be because I have too many photos on it.  Apparently 2,300 photos is considered ‘too many’.  Go figure!

Of course, you already know I take a few photos.  Ok…a lot of photos.  Probably too many photos actually.

The majority of the time the photos you ultimately get here posted actually end up coming from either a little Optio W90 waterproof camera, or my DSLR camera – thus I tend not to end up using the majority of cell pictures I take.  But in my head when I take them I usually have a reason and/or caption already planned.  End the end of course it all goes to nowhere land.

So after copying the 2,300 photos off to my computer the Girl and I were sifting through them and stumbled upon photo after photo of funny or random memories (don’t worry, no Paris Hilton moments here).  Most of them I wrote up posts already on – but this might just give things a different perspective.  Not the best photographic quality perspective, but a perspective nonetheless.

We should start out here…for here I have no story.  I’ve never seen such an arrangement of car and bike before.  Especially a bike arrangement that seems so fraught with potential fail in so many ways. 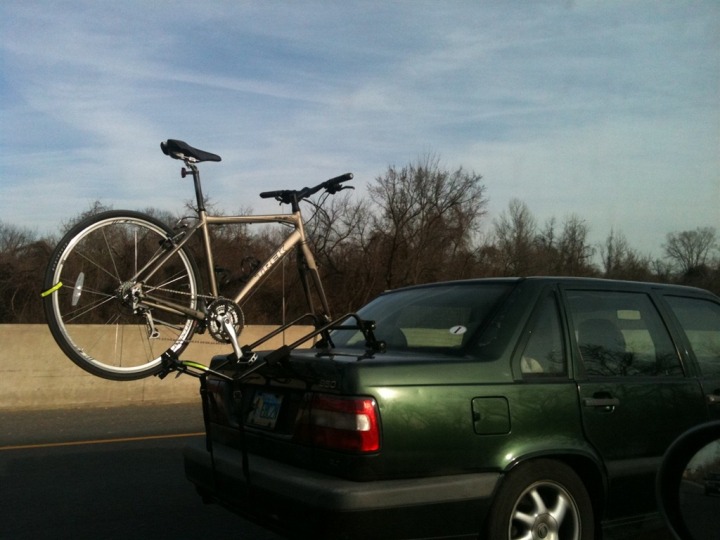 Speaking of situations with so much potential fail…this was following a ride with my Dad last fall.  We ended up going a wee bit farther than we thought and called my Mom for a ride home.  While we waited in the grocery parking lot, we caused some trouble.  This is the only one I actually used in a post previously, but because it was so priceless…it got a do-over. 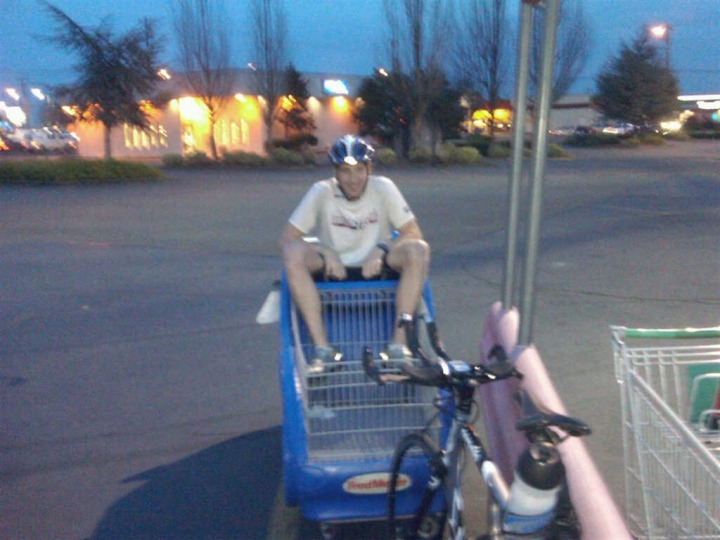 Last spring when I got hit by a car during the Rev3 Knoxville Triathlon I eventually made my way to the hospital.  I thought this little section was entertaining on one of the umpteen million forms I had to fill out… 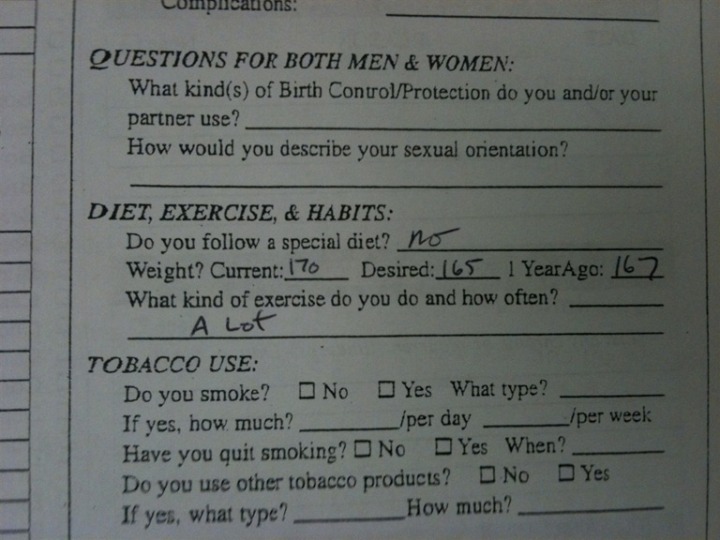 I often create a little garden on my deck at home – primarily with herbs and tomatoes.  While searching out the best starter plants, I found this sign: 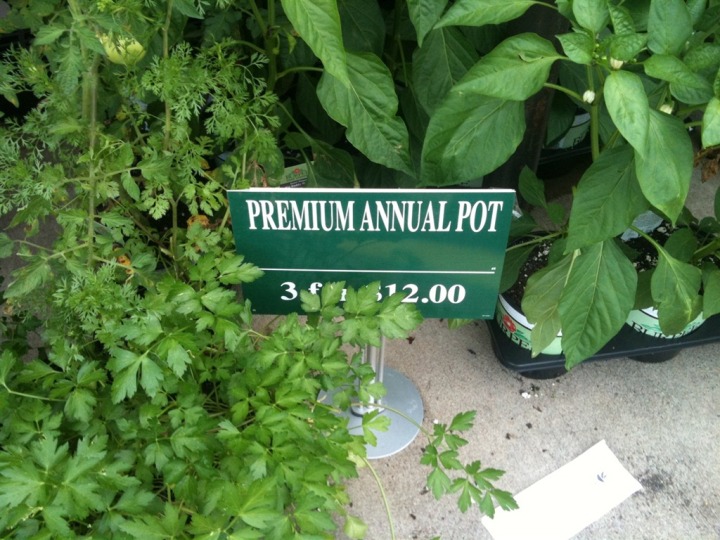 Due to the number of trips I make, some cities, countries or trips never even make it to the blog – simply because either I’m only there a short time, or there’s just too much else going on.  Such is the case for a brief 12 hour trip to Buffalo, NY, and Niagara Falls last summer.  As part of that the Girl and I swung by the home of the Buffalo Wings: 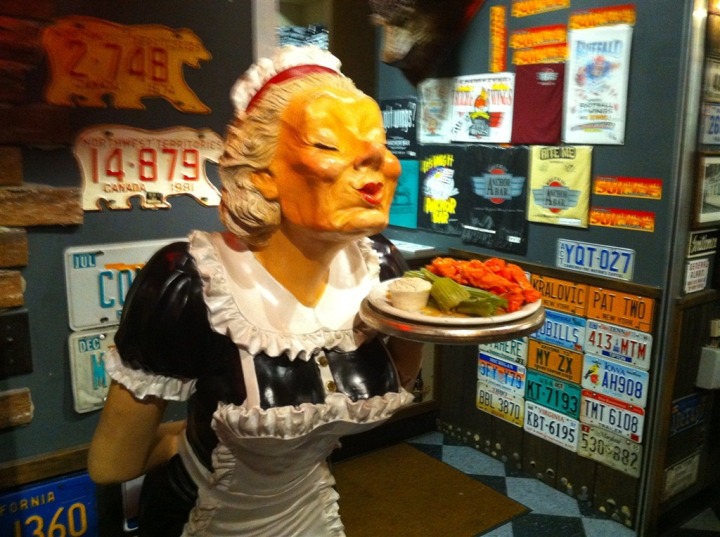 You may remember recently the post I did around how to travel with a bike.  As part of that you probably noted the foam piping I use to protect the bike.  What I really needed though was some protection from The Girl.  She clearly was confused in her understanding of what the foam was for – instead choosing to beat me with it.  Ironic given that it was ultimately designed for padding/protection. 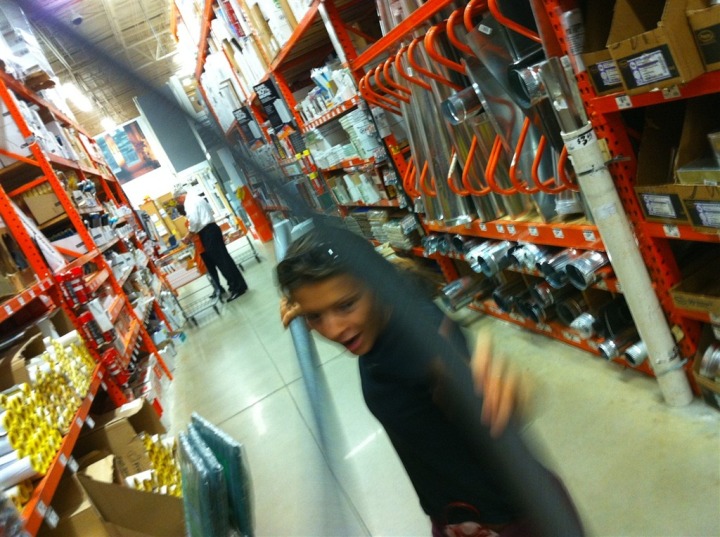 Speaking of The Girl – during a trip to Connecticut and Rhode Island a few weeks prior to us getting engaged, I took this shot of her on a swing at a small park.  One of my favorites: 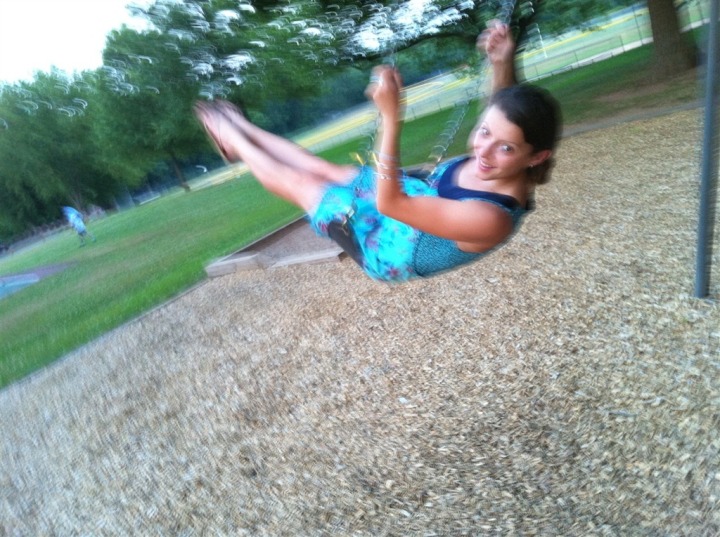 A couple weeks later I found myself in the Santo Domingo swimming through garbage on the way to finding myself in a police compound.  What I didn’t mention is that after I found a pair of semi-matching sandals amidst the garbage…I took them all the way back to my hotel room.  Seemed like a waste not to: 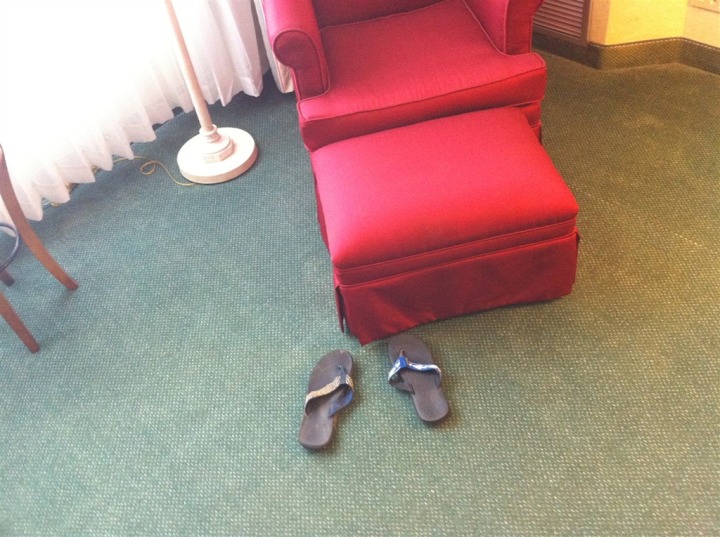 Fast forward two more weeks and I find myself in St. John’s Newfoundland, trying to re-do my race wheels after getting three flat tires in a single race the day prior.  At least it was warm out: 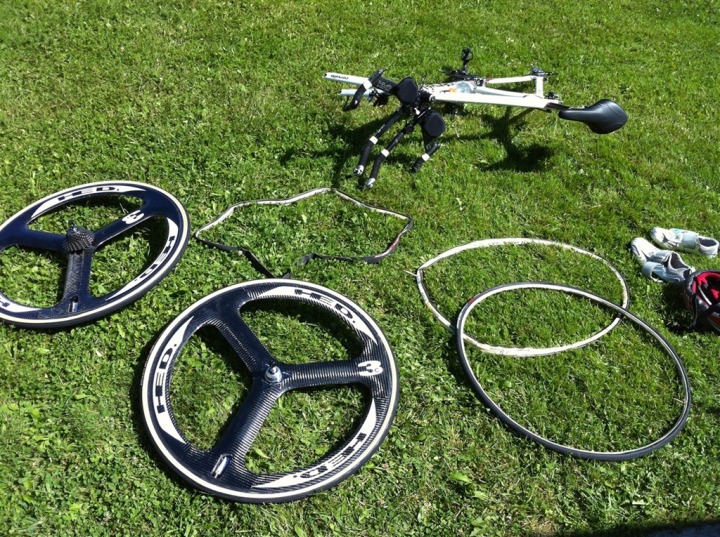 A month later me and my bike are in Vegas for Interbike, though, my bike apparently thinks it’s party time – and is lounging around in the tub.  I don’t really know/remember why it’s in the tub to be honest. 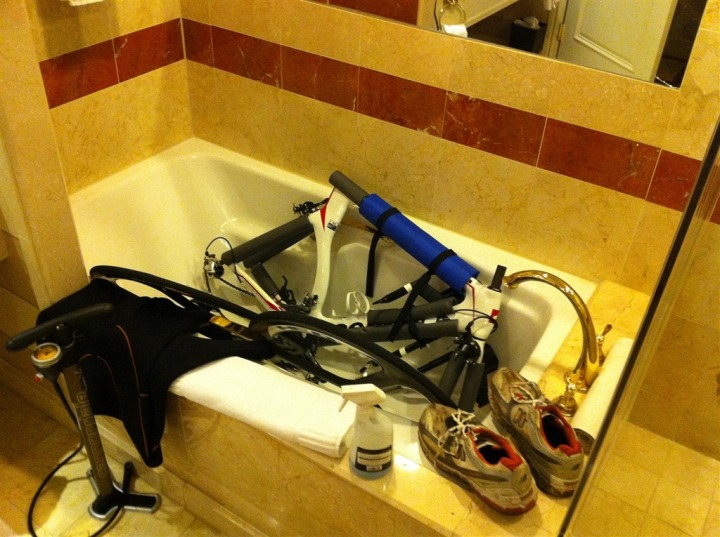 I can at least explain this…it’s a run out at night in the desert outside Las Vegas after a bike as part of a brick workout: 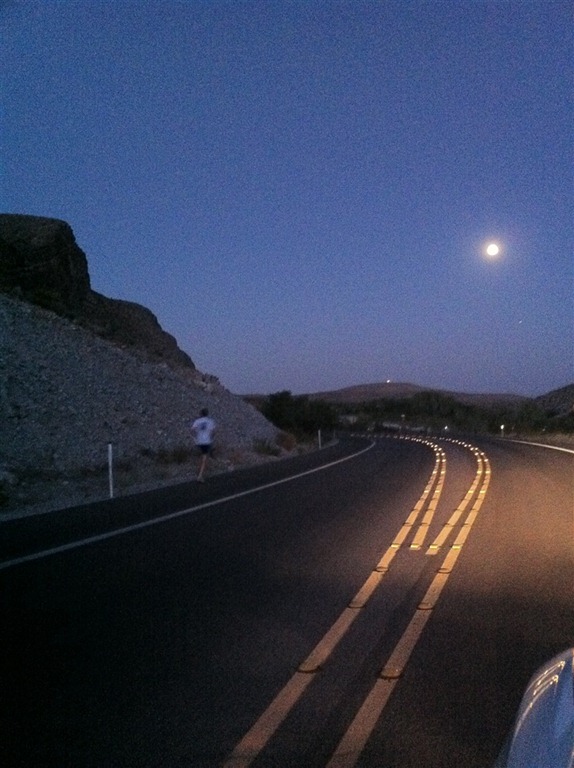 Which of course results in this, trying to dry everything out in the hotel room: 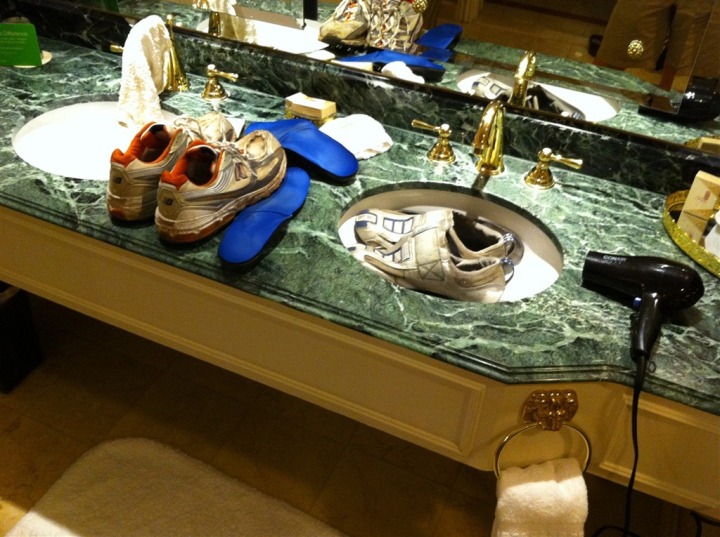 I fly enough that I get a fair number of free upgrades, and thus sometimes you get some interesting food options.  Because I’d been crossing back and forth across an ocean almost every week over the past 5-6 months, I got pretty good at understanding my food options.  Take for example, the Chocolate Ice Cream Softball.  This was served on many United International flights.  It’s a chocolate shell with ice cream inside.  Regrettably, it’s always frozen solid – as in rocks are softer than this thing.  No worries though, I learned that you simply let it sit a bit.  Not like 5 minutes – but about 45-60 minutes before eating.  Consider it a long intermission.

Regrettably, the guy sitting next to me was an Ice Cream Softball Virgin.

He tried to approach his Softball with vigorous excitement and passion.  The Softball wanted none of that action.  It proceeded to shoot off his plate with the speed of a major league fast ball, flying down the aisle half a dozen rows, before landing and then continuing to roll down the aisle to the end of the cabin. 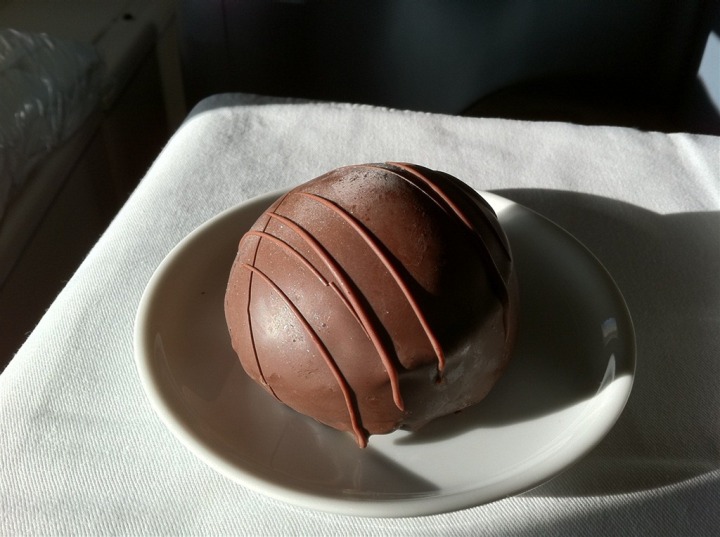 The home of Mr. Ice Cream Softball, on a flight back home from a trip through Asia before heading up to New York City for a weekend: 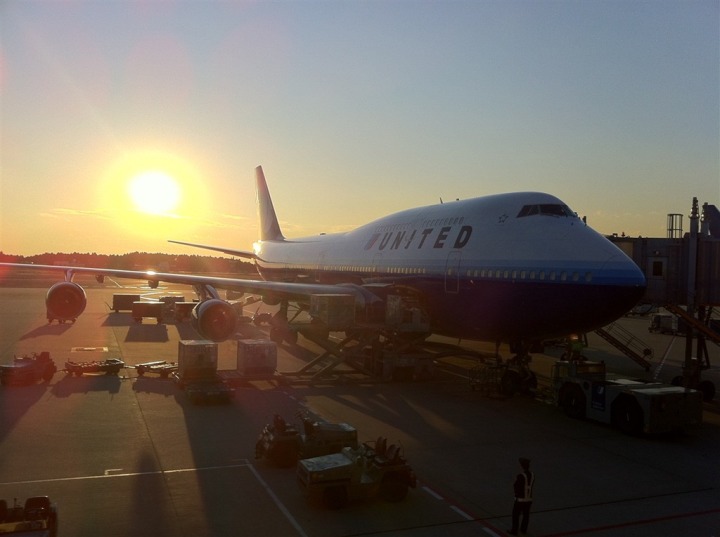 A month later at the start of our holiday trip to Africa, we found ourselves initially on a string of small Air Canada planes before connecting to a larger international aircraft.  I’m not sure why they were giving out pillow kits for 45 minute flights…but they were.  Either way – it included this illustration.  Which of course begs the question – why on earth is the lady only wearing underwear? 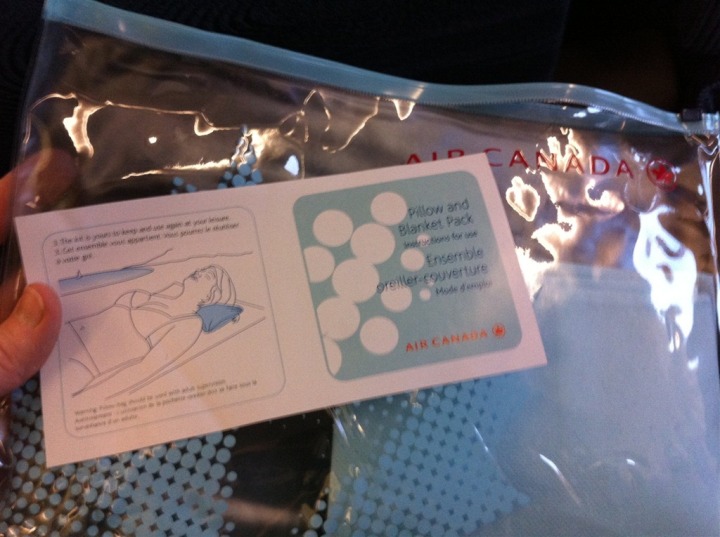 Once in Africa, in Johannesburg there’s my favorite machine upon arrival into the international customs welcome area – the pizza vending machine: 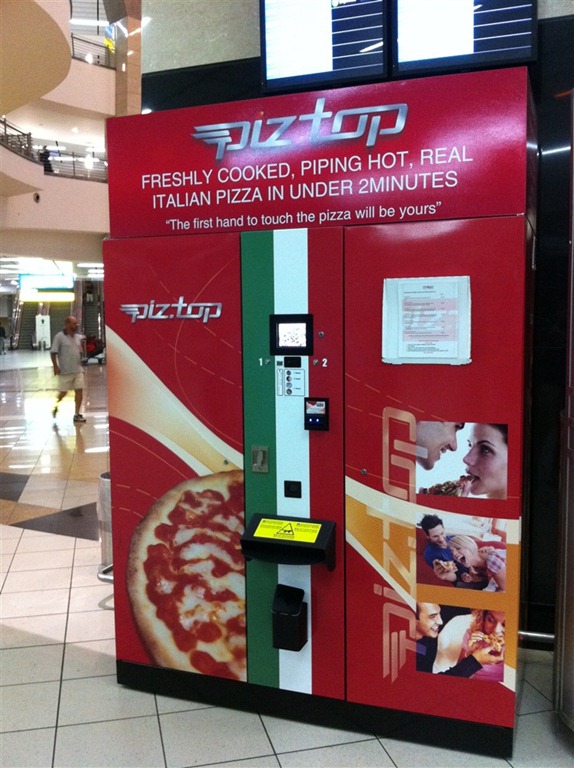 Finally, last but not least, I’ll leave you with this photo from a few weeks ago – also ironically in JoBurg, of The Fudge Man.  He was wandering through traffic…selling…well…fudge. 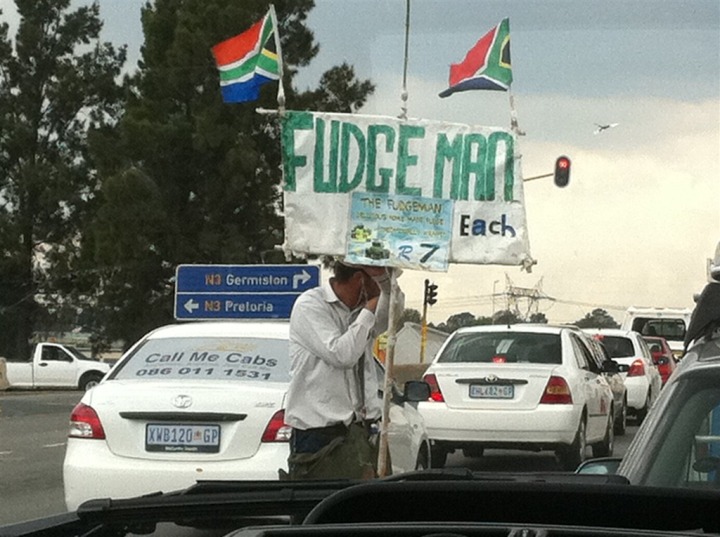 To quote a wise man from India once – “For some things, there are no explanations.”