The biggest triathlon event in the DC area – and one of the biggest in the nation/world is just a few days away.  The Nation’s Triathlon will kickoff this Sunday with 4,000-6,000 athletes on a redesigned course that takes you past just about all the major tourist areas of DC.  I’ve actually competed in the race the past three years, but this year I’ve instead got a series of three back to back to back weekends of races to finish off my season – starting next weekend.  That doesn’t mean I don’t enjoy the course though.  You get to swim in the Potomac, ride past the monuments, and then run all over creation.  Both the bike and run courses are quite fast, and really rather enjoyable.

Now the swim course is actually pretty nice despite the bad rap it often gets.  For those not familiar, it basically goes upstream to a massive arching bridge, before you eventually wander back downstream to the swim start area.  While you’re unlikely to set any swim PR’s, you will find it’s a fairly easy swim to sight off of because you can just sight the river wall in both directions.  And, if you’re competing or spectating this year – you may want to check out my CSI-style analysis of swim routes from last year.

But, one thing that wasn’t on the news radar from last year was a new visitor.  Last week an 8’ Bull Shark was caught downstream in the Potomac River.  You may have seen some of the headlines or local news stories.  Here’s a picture of the shark: 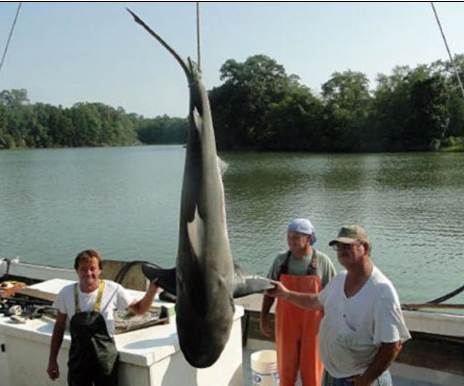 The first thing you might ask yourself is: ‘Say what?  Why are sharks in freshwater?’

Well, the Bull Shark has a long history of taking freshwater road trips.  In some cases as far up the Mississippi River as Illinois.  That’s a wee bit longer than the hundred or so mile trip up the Potomac river.  Furthermore, they can even chill for years upstream – though like a long trip in a minivan of kids, it does take its toll on them.  And, even cooler (yes, I said cooler) is that they can actually jump up rapids…just like salmon.  Sign this dude up for the swim portion of a relay team!

So – why exactly am I telling you all this lovely information…weeks after Discovery’s Shark Week has ended?

Well, first, because I really like sharks.  I think they’re pretty cool.  And in the case of the aforementioned catch, it’s too bad that the shark is now sitting in a fridge in this dude’s basement waiting to get its head on a plaque.

But aside from that, the real reason is to remind you to not really worry about it – it’s highly unlikely Mr. Shark is going to make an appearance on Sunday.

See, while sharks do indeed travel inland, there aren’t any reported sightings this far inland on the Potomac – and certainly not any shark attacks on the Potomac.  There a million much better locations to pickup a free meal on the Potomac than Washington DC.   Let’s look at a quick map of where the shark was found, and a few local triathlons I’ve done just this year, along with Nation’s Tri: 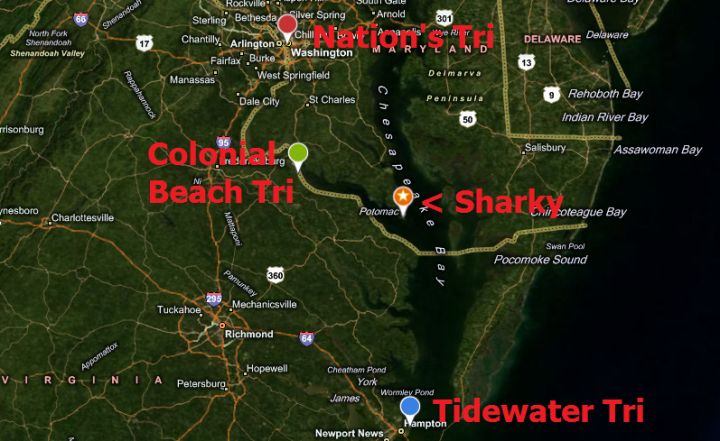 Adding to the case, is that this particular shark was really only just out for a day trip in fresh water, less than half a mile away from the saltwater of the Chesapeake Bay.  Keep in mind that Bull Sharks have been known to swim up to 75 miles a day – so half a mile just means he was bored of the bay and went for a brief field trip.  That’s like you or I walking to our mailbox across the street.

Next – and this is important – think about this: If you were a shark, would you swim in the Potomac?  You know, the same one with two-headed fish and everything else.  I think not.  I rest my case.

But lastly, keep in mind that there has only been a single attack on a triathlete in the last few years in total anywhere.  And that was not during a race, but rather during an early morning training swim along the Pacific Coast.

In the case of the Nation’s Triathlon, your biggest worry need only be to not crash into anyone else on the bike leg while enjoying views of the Washington Monument (big pokey thing) or Lincoln Memorial (big blocky thing).  Other than that – enjoy the day and the city – I’m sure you’ll enjoy it here!

Oh, if you’re like me and enjoy shark related stuffs – here’s a few other shark posts I’ve done:

Hanging out in the Maldives with Whale Sharks:

A day with the Maldives Whale Shark Research Programme

Shark Week Time (Starring me?!?!)
Shark Week – A history of my shark dives

Oh and for those not interested in sharks, but just the Nation’s Triathlon…here ya go: