Ever since I was a kid I can remember watching Discovery Channel’s Shark Week – which typically occurs during the last week of July (this year July 27- Aug. 2…aka NOW!).  Way back when (probably 10-15 years now), the content from year to year didn’t change a whole lot.  But over the past few years they’ve done a great job at pumping in all new content each year for the prime time stuff and then supplementing the other times with reruns.  The addition of the Mythbusters crew has been awesome as well.

Perhaps it’s due to watching Shark Week as a kid that I’ve found myself having a unique attraction to sharks.  Ever since becoming Scuba certified about 5-6 years ago I’ve been thrilled at the chance to see sharks underwater.  Although I love seeing them while scuba diving – I definitely fear them while on the surface floating around (such as open water swimming).

In order to celebrate Shark Week – I present my favorite 7 photos of sharks that I’ve taken over the past half a decade or so during my travels.  Why 7?  Ummm..one for every day of Shark week

1) If you go to Cape Town South Africa , you must go out and cage dive with the Great White Sharks.  Even if you don’t actually go in the water – you should go on the boat trip and watch from the deck.  I was incredibly lucky when I went in that I had 3-4 large 15’ Great Whites circling the boat for hours.  The below photo is when I was down in the cage.  At one point one of them breached the surface and landed on/next to the cage.  It was as if a bus hit us.  Amazing power.  Also interestingly, it’s front horizontal fin slipped into the edge of the cage a bit.  VERY sandpapery, not soft and slippery at all. 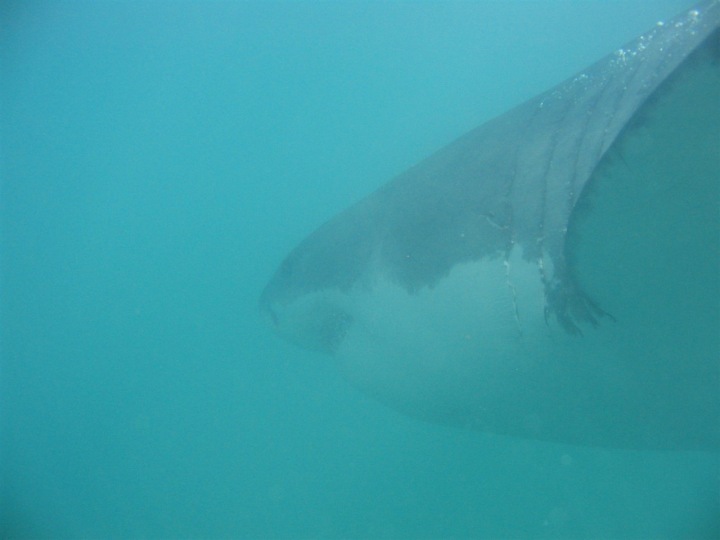 2) Note the length of this great white.  Just simply huge.  I took this from the boat.  But he was the same one I also took from the water above. 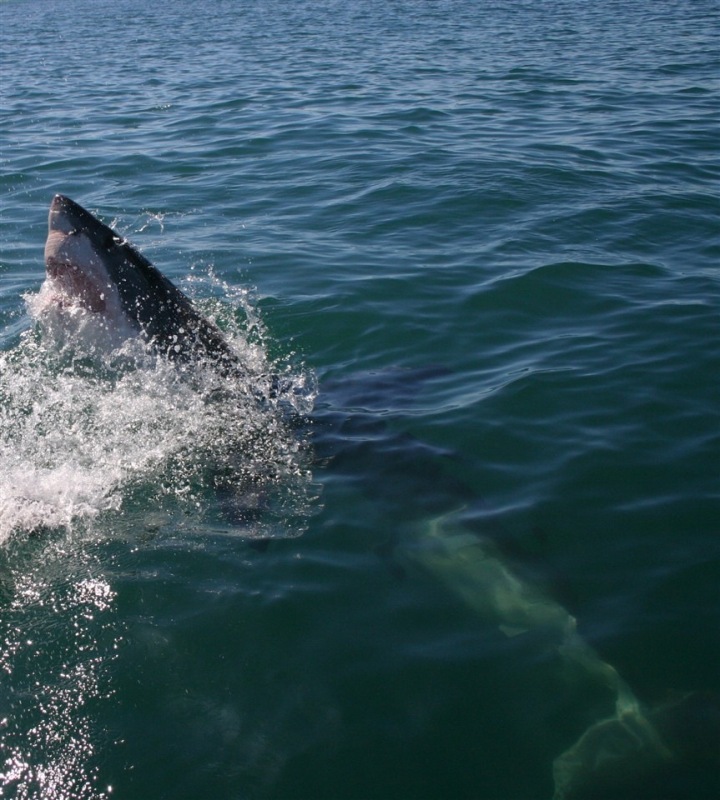 3) Palau.  Just this past December while my brother and I were on our trip to Palau.  There’s actually two sharks in this photo, one in the center and one slightly lower.  Apparently the day before there were some huge Tiger Sharks in the same channel that were seen from the air.  Yikes!  (Tiger Sharks are not exactly human friendly) 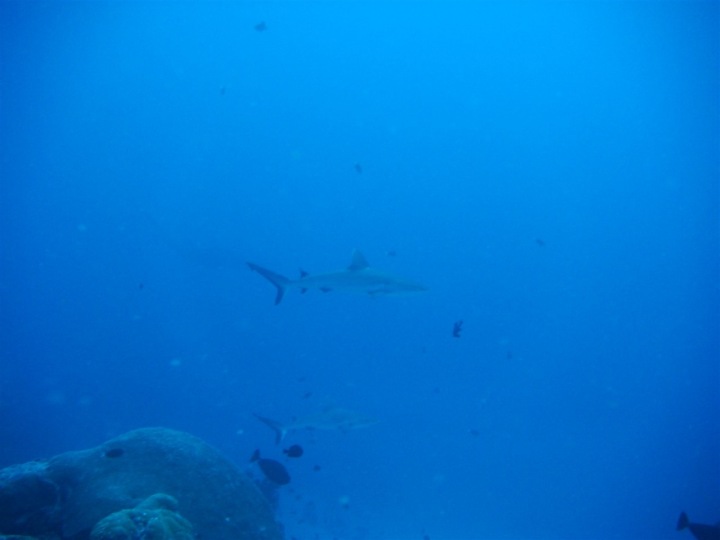 4) Tahiti (below)  This was actually my first encounter with sharks.  We went on a dive and were surrounded by them circling us.  Perhaps 30-40 of them, all about 3-6 feet in length.  It was great while under the water, but when they followed you back to the surface it made for a tense jump up onto the boat. 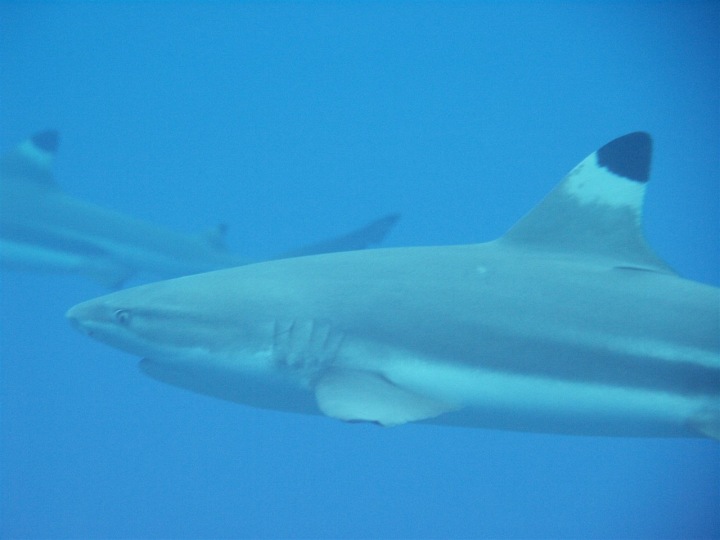 5) The amount of power when they would breach the surface was incredible.  There is no way I’d want to be in the line of fire when they go shooting up to the surface towards their prey (taken back in South Africa in Shark Alley) 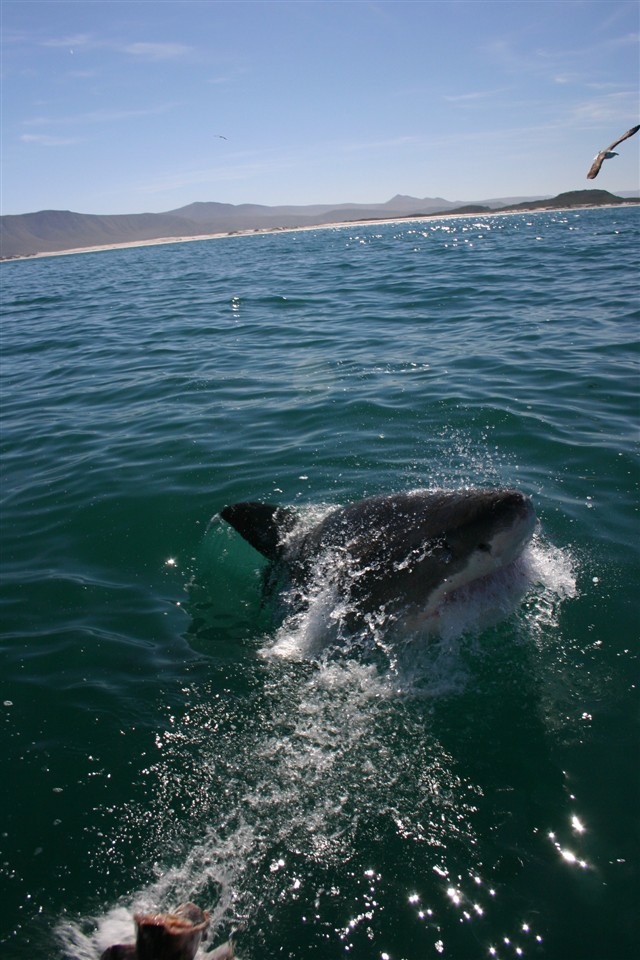 6) Maldives.  This was taken quite a bit further down than most – almost 110FT.  Hence why it’s a bit darker.  Plus, I don’t exactly have the best underwater camera gear. 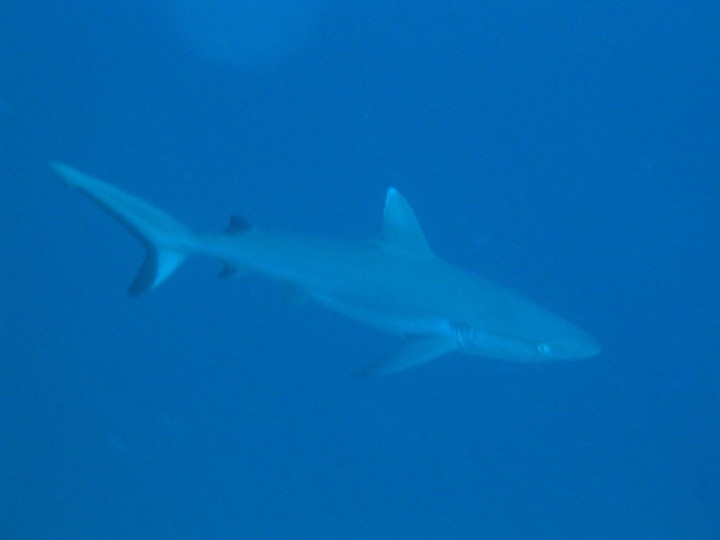 7) Last but not least – ending up back in South Africa.  Thankfully, the Great White decided that the chunk of meat floating on the surface made a better meal than me (I’m just a few feet away, also floating like a chunk of meat). 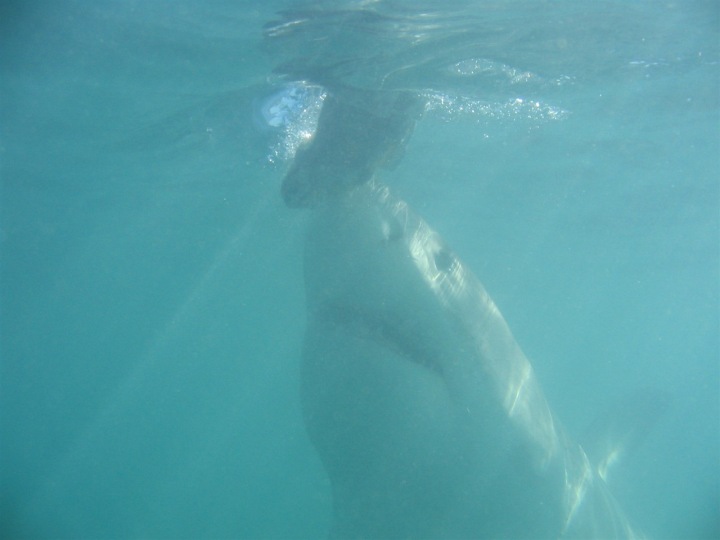 I really want to get back to Cape Town and spend more time checking out the Great Whites – they are without a doubt the most amazing animal I’ve ever seen.  One of these days I’d LOVE to do a live aboard trip out to the Guadalupe Islands.   It’s a days journey from San Diego and then you get 3-4 days out with the sharks and other marine life.  There’s also the Farallon Islands from San Fran.    WAY cool.  Just need to find a friend to go with me. 🙂  Bueller?