Back to the track…and Seattle.

The last few days in Seattle have been great. I’ve been out here for work, but I’m able to get a ton of non-work things in as well.

After arriving Monday afternoon I swung downtown to pickup my relevant conference speaker things and then headed home (my parents house) to enjoy the rest of the day. I had gotten my Monday swim workout in earlier in the day before my flight.

Tuesday morning I spent working, but by time Tuesday afternoon came around it was time to get out to the track to knock out the workout. There are a ton of track choices in the area – but I simply chose the one track I actually don’t have any recollection of running around…my high school track.

See, despite how it may appear – I didn’t run high school track (or college track). I did run high school cross country my freshman year – and then decided that was a horrible idea. Really – why would you want to voluntarily run?

Now, I did spent considerable time on the edge of the track and field, as I did high school marching band. So I was no stranger to the facility. But since I graduated 8 years ago, they’ve upgraded the track surface as well as added field turf to the infield – much better than the muddy mess it was for us in the fall. 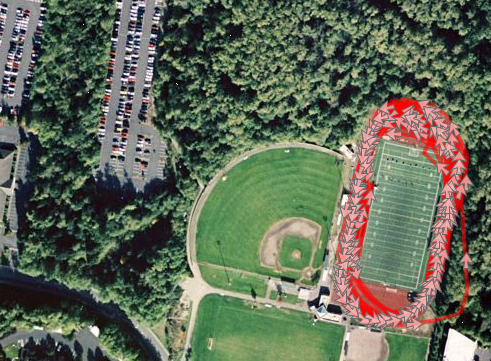 (The athletic facilities at the school, the random line through the woods illustrates a temporary GPS confusion moment)

One nice thing about Seattle is the cool weather. I completely obliterated my track laps. My workout was: 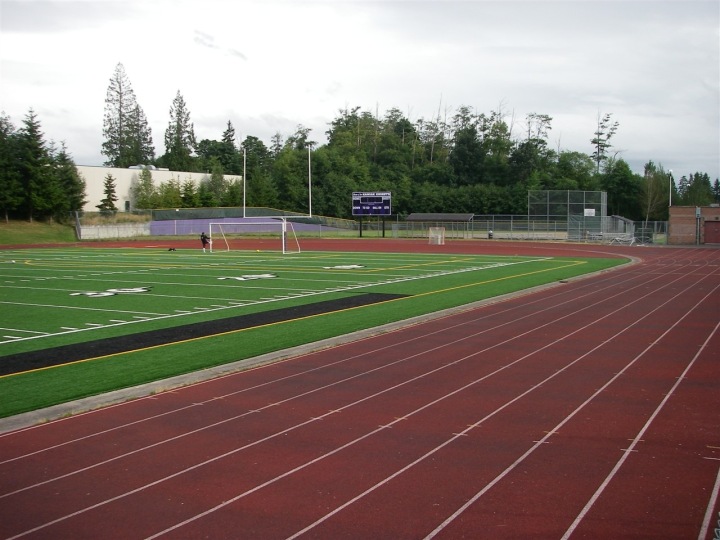 After that, it was time to head out to dinner. For the first time in many many years I was actually in Seattle for my birthday, and my parents wanted to go out and celebrate. We went to Ray’s Boathouse, in Seattle. Given it’s named after me (of course), it seemed logical. It’s a fairly nice local seafood place. 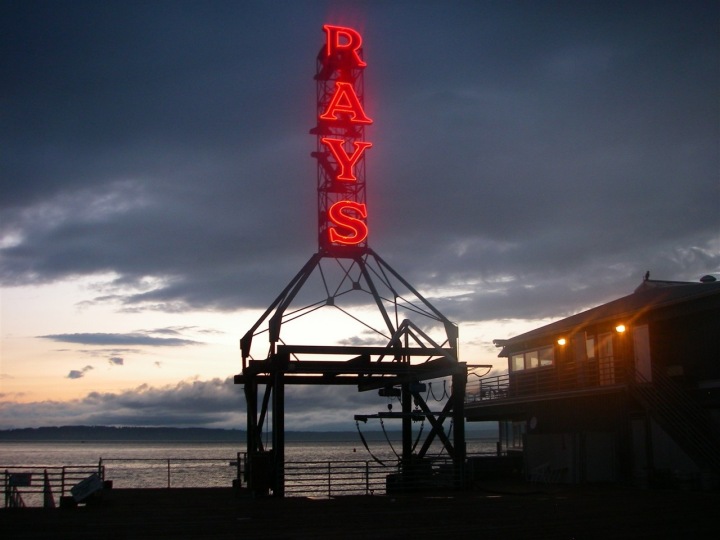 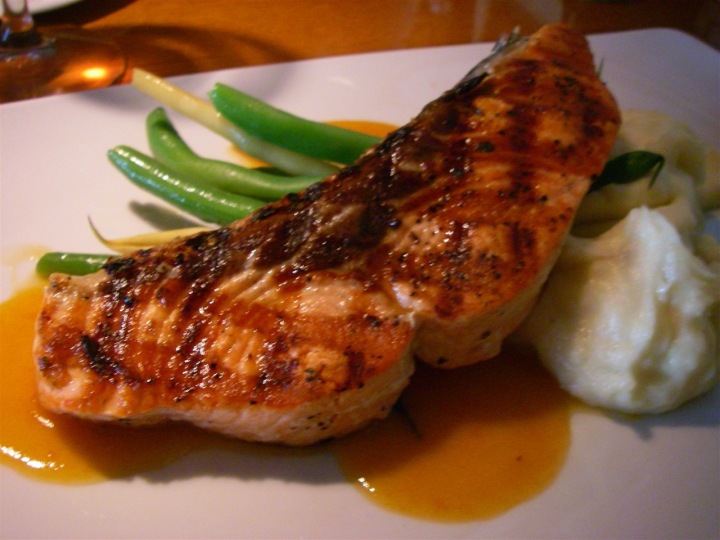 And a totally awesome Chocolate German Cake my mom made for me by request! The thing is massive. And really really good. 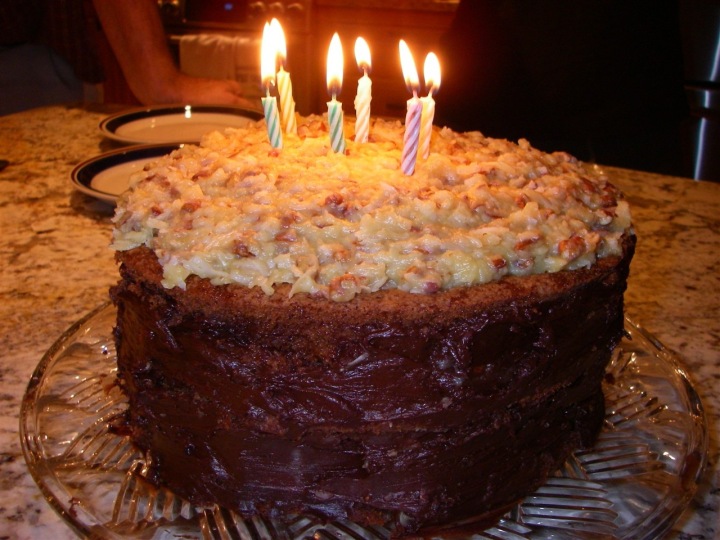 Swimming in the sky!

Wednesday I did more work stuff and a 4,100 yard swim. I snuck my swim in during my lunch. I went to a pool that’s located on the 14th floor of a downtown office building. Yup, a full 25 yard five lane pool. 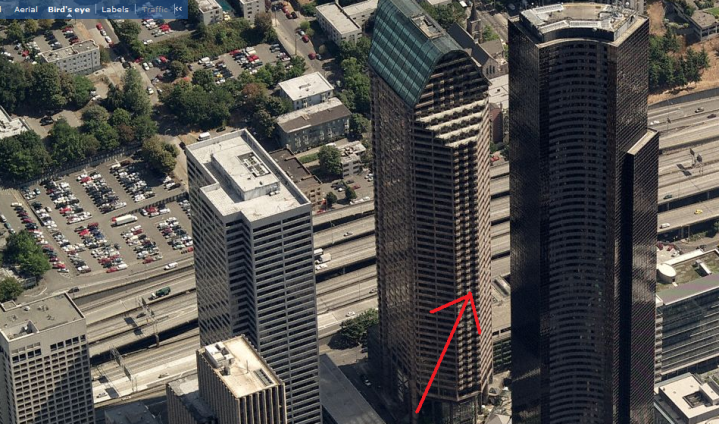 Kinda neat looking out the windows at office buildings rising up to your side. 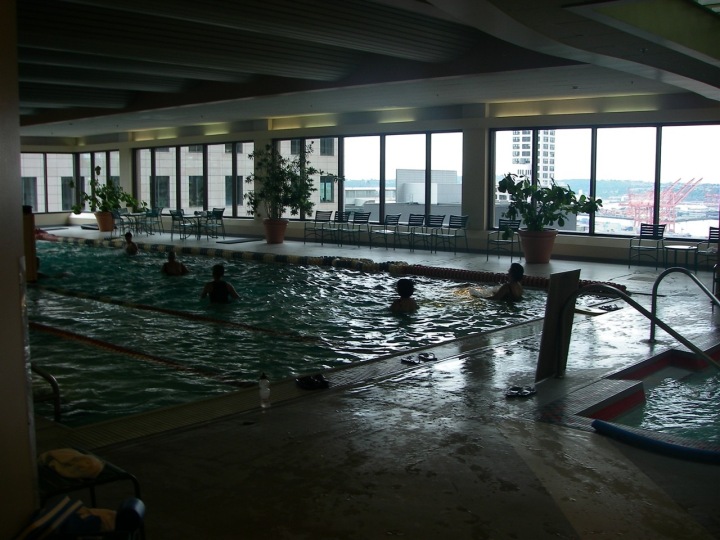 (Sorry for the dark photo, it was kinda hard to take it inside with the bright lights)

I got up way too early Thursday (this) morning to head out for my usual 20-miler. I decided on a waterfront run out to Alki beach. If you’re ever in Seattle there are two places to take nice photos of downtown. One is on the way out towards Alki Beach (across the bay), and the other is Highland Ave (up on Queen Anne hill). 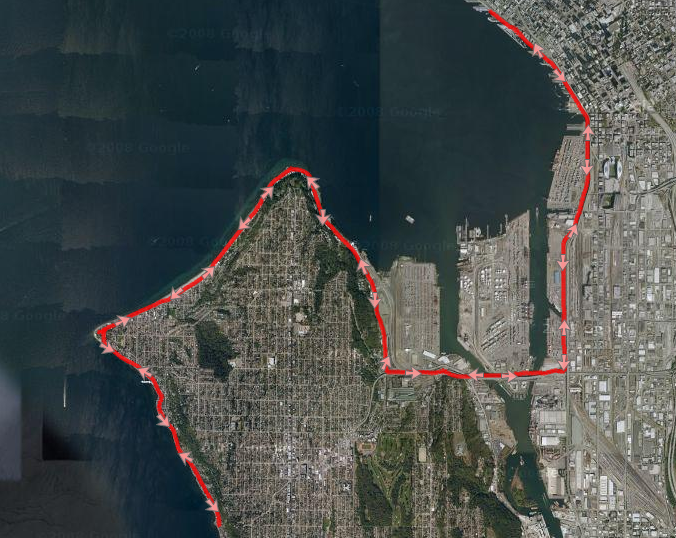 I cruised down the waterfront, past the boats for the tourists, then the ferry’s for the locals, and finally the working ships unloading cargo from around the world. 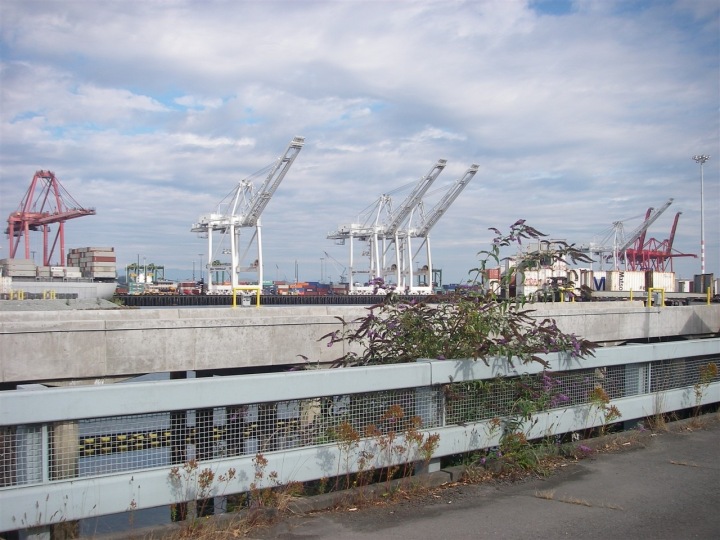 (This photo was taken on my way back, on my way out it was still kinda dark and the photo didn’t come out well)

As I rounded the bottom of Elliott Bay (see map above) I started passing the commercial fishing ships coming and going and then a bit further the sport fisherman coming in. Oh yeah, and Mt. Rainier in the distance. 🙂 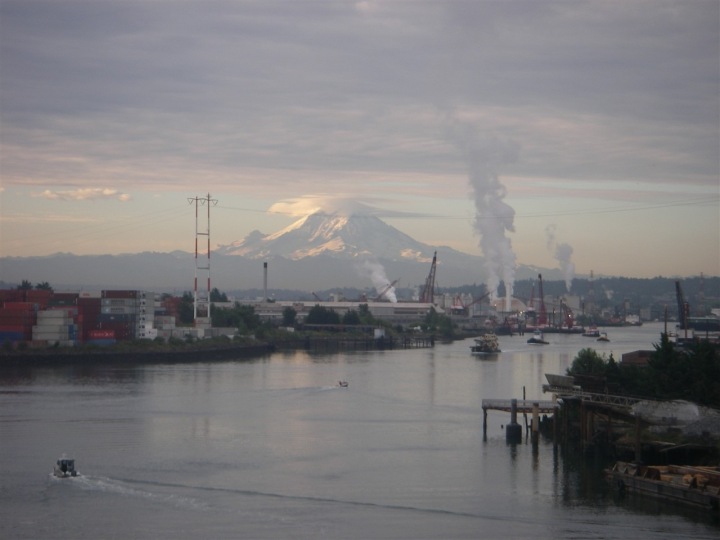 As well as some out fisherman out on the pier fishing. 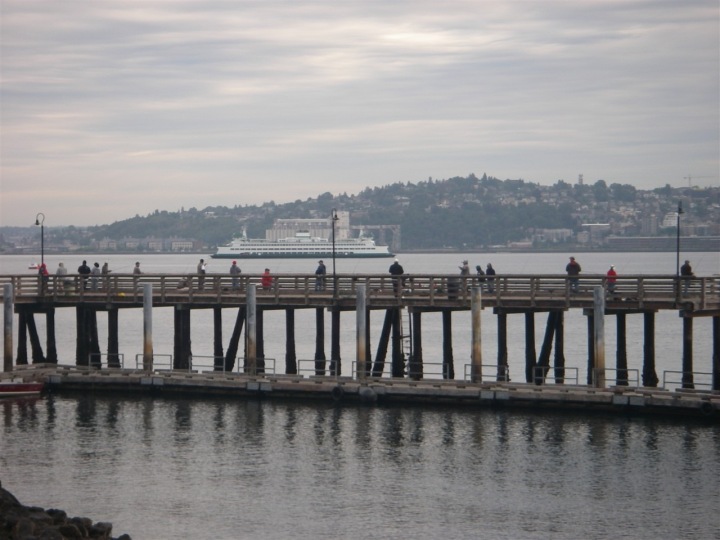 I noticed the sun rising over Seattle to my right and snapped a quick photo (well, all my photos were quick, just kept on running for most of them). 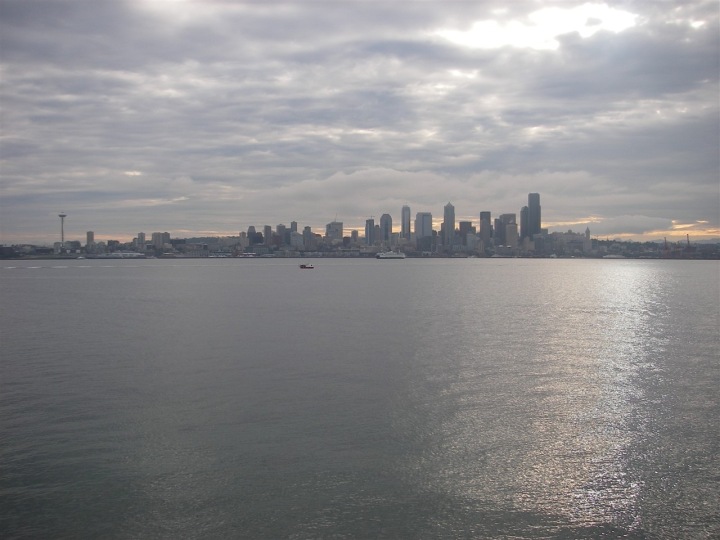 Beyond the boat launches it turns into a semi-continuous beach area, although you won’t find too much bikini/water activity in these parts beyond an active scuba diving location. The water’s waaaay too cold. 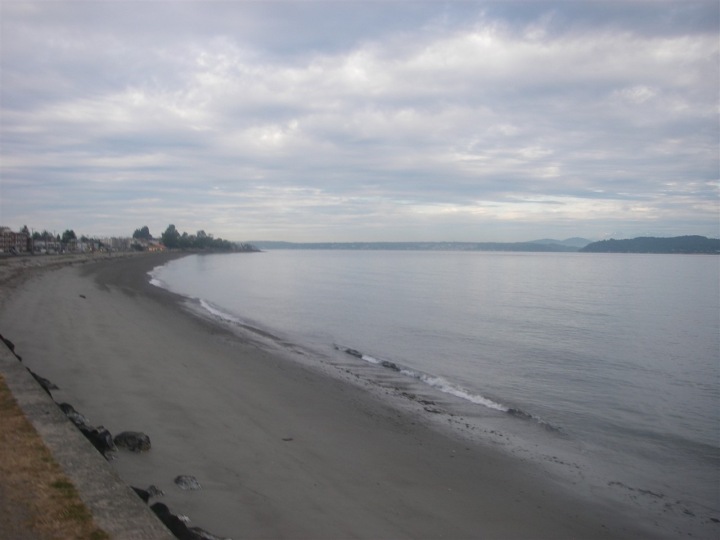 Every 10-15 minutes a ferry boat would cruise into or out of Seattle while another one would glide past in the opposite direction. Synchronized clockwork trading places at the docks.

At roughly the 1hr 15 minute marker I had gone far enough along the shoreline and turned back around. On the way back I noticed a lighthouse that I had somehow missed on my outbound segment. 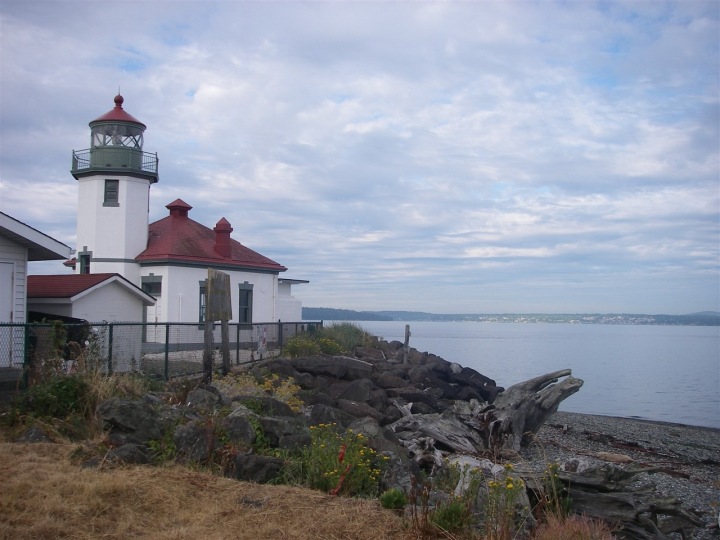 I also stopped for a quick second to fill my water bottle again and take this self photo. The sun also made an appearance for a short bit! 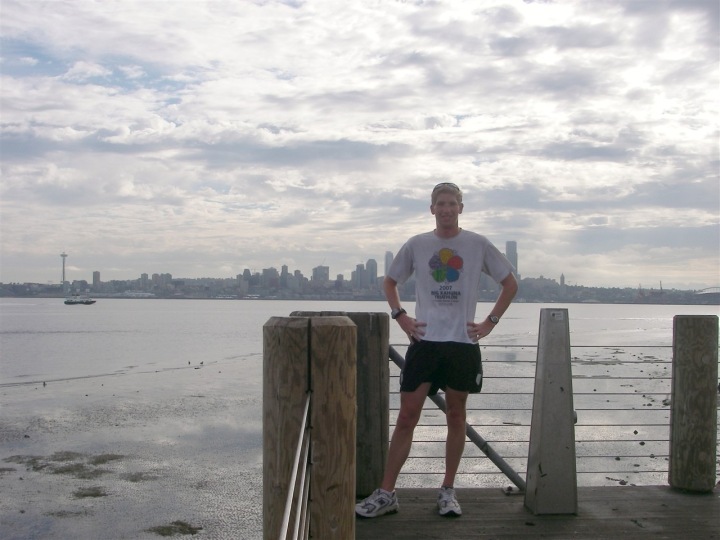 Right before I rounded the bottom of the bay again back to Downtown Seattle I noticed a boat that hadn’t been there before. And it was in a bit of a weird place. Clearly the ‘Captain’ was not happy about the situation. Or me taking a photo of it. Officially…a failboat. 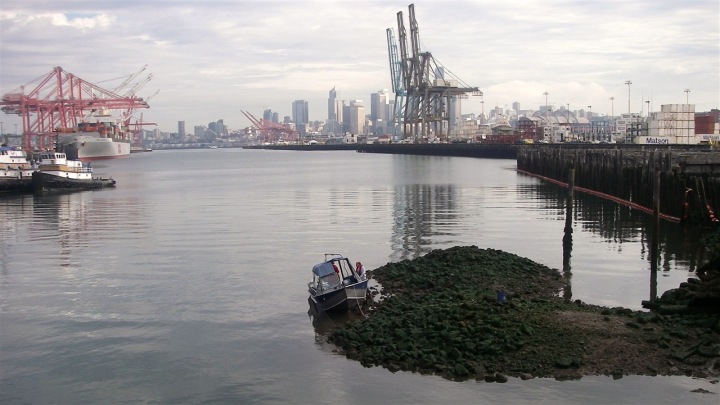 A little over 2 hours later I cruised back into downtown Seattle for the last few miles down the waterfront corridor under the shadow of the Alaskan Way Viaduct (that elevated highway below to the right). 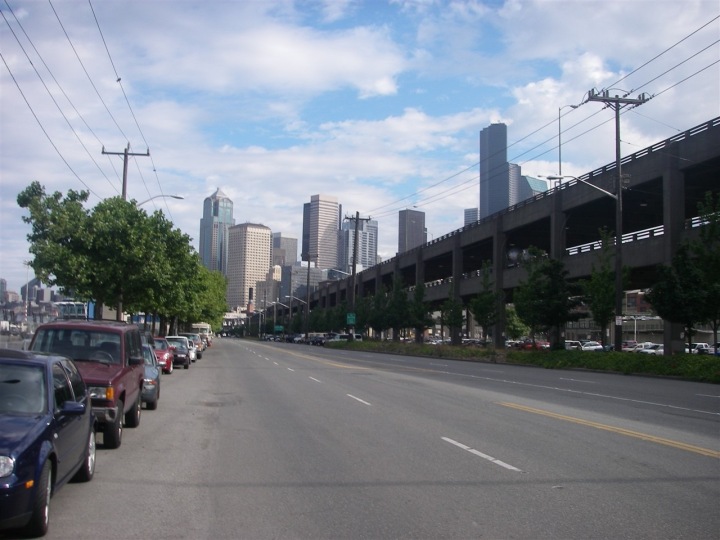 My run pace rocked! Like Tuesday, the benefits of cooler weather were very clear. I usually knock out between 19.5 and 20 miles on my long runs, depending on weather. See my long runs are actually a time-determined affair. Meaning I just run for 2hr 30 minutes, whatever ground I cover is what my total mileage is. This week I covered 21.1 miles in that 2hr 30 minutes, for a pace of 7:20/mile. Sweet! Btw, this is all Z2 stuff (so conversational pace), I’m ‘not allowed’ to go Z3/Z4/Z5 on my long runs. 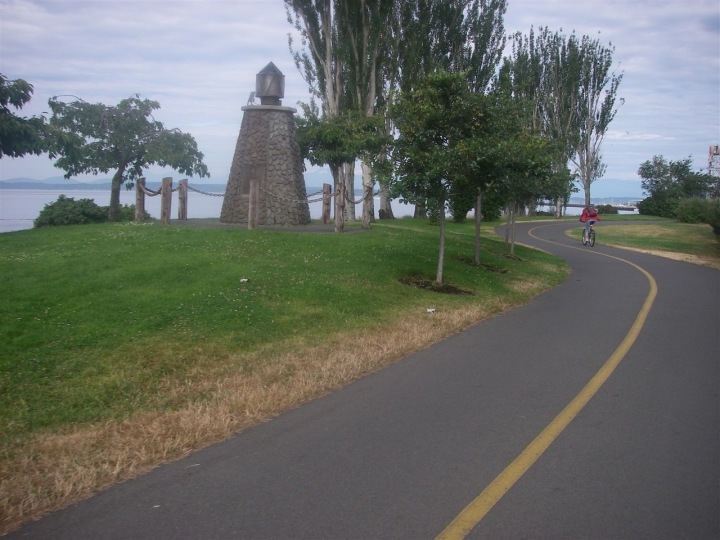 (The bike/running trail I took for my cool down ride)

From there I jumped on my trusty Seattle road bike and headed northbound along the waterfront through Myrtle Edwards park before wandering a bit around some other fishing areas and then heading back. Just an easy Z1 peddle. Like bike commuting really – ideally not breaking a sweat. The goal is to loosen up the legs.

Speaking of legs. Since I didn’t bother to change into biking shorts, I happened to notice how incredibly un-tan some parts of my legs are. Woot! Go bikers tan! 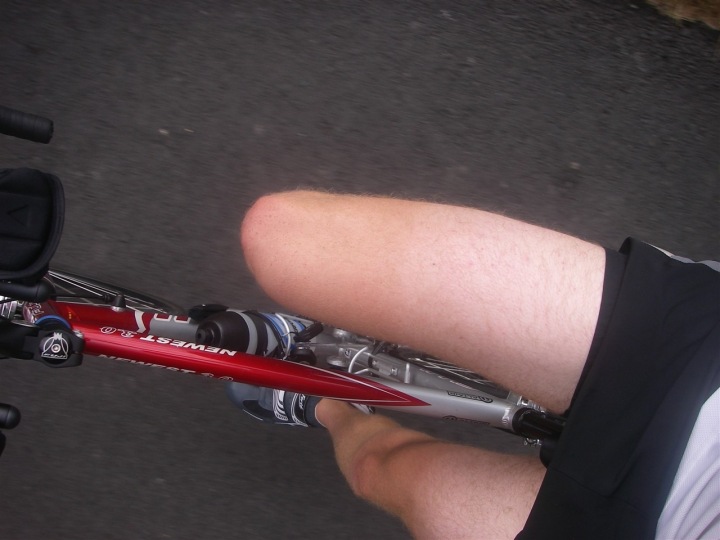 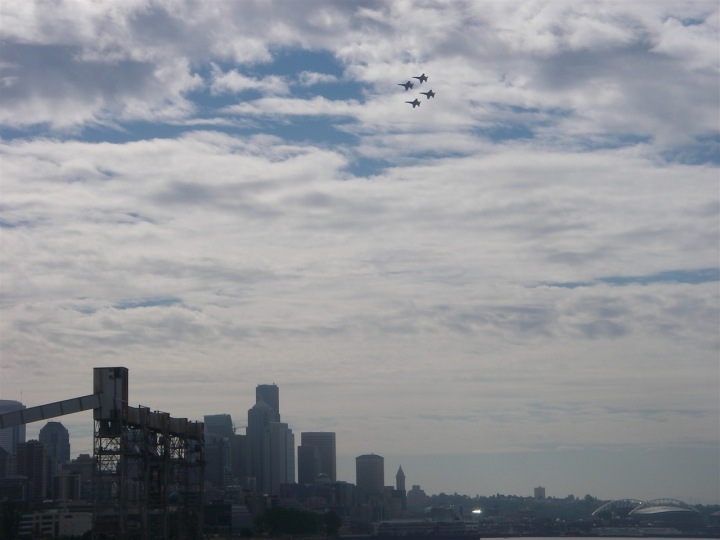 As I headed back the Blue Angles started their practice routine overhead. You can see them in formation in the photo above downtown Seattle. They are here for Seafair this week, which is a big Seattle celebration that occurs every year.

After a quick shower and I was at work by mid-morning. For lunch, I did walk down to the Pike Place Market for food. It was bustling with tourists and vendors, as would be expected in the summer season. 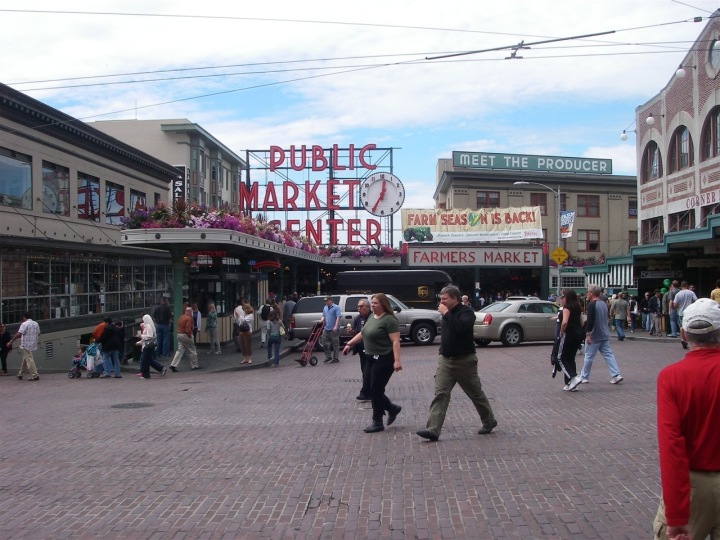 And that is how ya roll in Seattle. Someday I’ll get back to my hometown. In the meantime, tomorrow morning got the flight back to reality: the ‘other’ Washington…DC.