Yesterday was a busy-bee day here in Seattle. I had three sports planned, plus a full day of work sandwiched in between.

It started off with a hour long bike ride out to Alki point and back (from downtown along the waterfront). It was a little funny in that I was going reverse of all of the bicycle commuters going into the city. They were giving me weird looks for three reasons. First, I was going the wrong way relative to them. Second, I was dress only in a t-shirt and tri shorts (I neglected to bring additional clothing, but really – upper 40’s is rather warm compared to DC). Third, I had aerobars on. I wasn’t going to waste my time taking them off just to appease people.

At any rate, I bumbled along out there. Not super-fast because the road was a bit more pot-holey that I would have preferred. Plus there was the ‘unknown’ factor that always slows me down the first time I do a route. But the weather more than made up for it. It was great out! Unlike the day prior, you could actually see the Olympics. Here’s two quick pics I snapped with my little camera. Note these aren’t the pinnacle of my photographic capabilities, given I was working with a tiny little cam.

Two ferries passing – one headed to downtown and the other to one the other side of the Sound, framed by the Olympics:

My most favoritest bike evah! My Seattle cheapo bike, the Fuji Newest. With a backdrop of the downtown Seattle Skyline and a ferry. 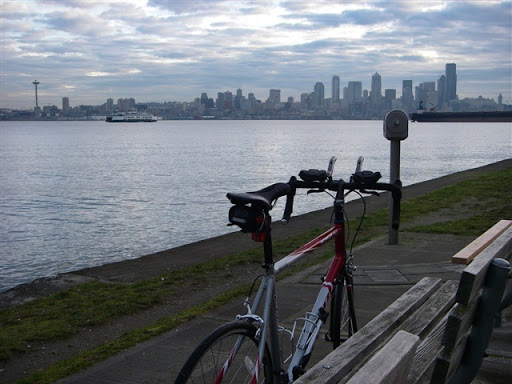 After that, it was off for a rather brisk 5K run along the waterfront (right in front of the Space Needle in the above photo). I continue to be puzzled as to why I can run so much faster in a brick scenario than just going out and running. I think it’s because my muscles are warmed up a lot more. On the outbound averaged 6:05/mile and then at the turnaround ran into a massive wind-fart that slowed me down to 6:22/mile. Still, I was quite happy. Off to work.

Following death-by-PowerPoint for 8 hours (although most was interesting), it was time to hit up the mountain.

Two friends and I drove the 45 minutes up to Alpental – located with Summit at Snoqualamie. Alpental is where I grew up skiing…four days a week for over a decade. Despite thinking you could get sick of the place, I still enjoy it – especially at less than an hour away. After last week’s massive dumpage (5-7 feet of snow) and with a 150″ at the base alone, it was pretty decent conditions. 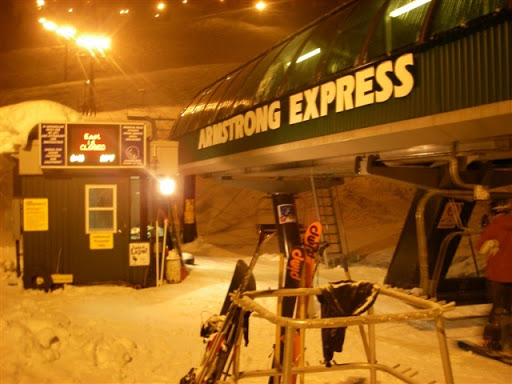 I was also testing out skiing with the Garmin GPS in anticipation of this weekends annual ski trek. After quite a bit of tinkering, I think I got it all figured out. I’ll write up some detail on a ‘how-to’ next week…post-trip.

Towards closing time (around 10PM) the weather started turning downright nasty. Howling winds and drive snow pellets. Still awesome skiing though, so we skied until they wouldn’t let us ski anymore. Check out the winds swirling at the top of the lift (video):

With that… I’ve got 24 hours till I leave for somewhere…woohoo!