One of the things I enjoy about getting back to Seattle is the running.  Mostly because it’s always cool – but without the dryness of the DC area.  Although sometimes that does indeed mean sucky rain (ok..most times), but sometimes it means just a nice foggy morning.  Take this morning for example.  Before work started I got down to the waterfront and got in a short 5K run along Myrtle Edwards Park.

Myrtle Edwards park is along the waterfront in Seattle and is probably one of the best parks in the city (only rivaled by Discovery Park,  and the views from Highland Park and Alki Beach).  Sometimes there are various marine mammals (Sea Lions) wandering about the edges of the trail, but this morning it was mostly just sea gulls and a view of the downtown skyline including the Space Needle.

Here’s a little self portrait I took as I finished up my run. In the immediate background is Alki Point – where I’ll bike to tomorrow for my morning ride. The Olympic Mountains are back there somewhere as well (trust me, behind all the fog/clouds they are…kinda). 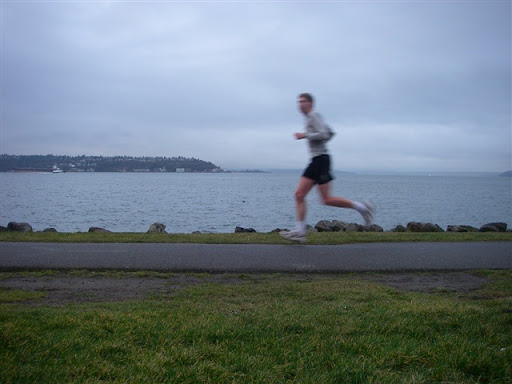 I had planned to stop by Highland Park to take a photo of the view from there…but I ran out of time – maybe Wednesday I’ll have time.  On the opposite side of the bay, here’s a photo I took back a while ago that’s fairly similar to the view from Alki (where I’ll head to tomorrow), except this one is from the deck of a ferry’s coming into the docks.  All I remember about taking this photo is it was cold as crap out (middle of winter). 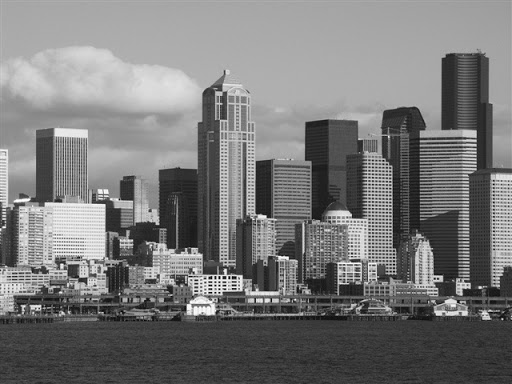 Tomorrow (Tuesday) night, skiing!  A quick 45-50 minute shot from downtown Seattle to the pass for some after-work night skiing.  My Sunday ski plans were derailed when all of the passes were closed due to TOO MUCH snow.  Yes, seriously.  It snowed over 7 feet of snow over the previous week, which quite simply overburdened the ski areas.  But that’s all right, I’ll make up for it next weekend. 😉  Although I’m keepin’ the deets on that one under wraps until I get there.