(And now… I present a return to Tri/Running stuff…)

I do a lot of traveling.  In particular, I travel quite a bit to Seattle (where I’m originally from) for both work and leisure.  The problem with travel is that it has the potential to hose up your training plans.  Running is fairly easy to get in as you can pretty much run anywhere.  And finding a swimming pool isn’t too hard if you take a few minutes to check out the Swimmers Guide.  But biking…that’s where things get tricky.  The primary issue being a lack of bike.  In particular – a road bike.  Finding a mountain bike isn’t super-hard.  Finding a road-bike is downright near impossible, let alone expensive.

For the first few weeks of going back and forth to Seattle earlier this summer I tried renting a road bike.  I was quickly spending $40-60 a shot to rent it for 2 days.  Forget that, I had to find a better solution.

I first tried the source of all things cheap: Craigslist. The problem there though is that most ‘good deals’ on Craigslist tend to last about 12 seconds.  Because I didn’t live in Seattle I would have to negotiate with the seller around a time I was in Seattle (which could be days or weeks in advance), and then there was the issue of bike condition, etc…  It just seemed like a painful experience in the making.

I then tried the second source of all things cheap: eBay.  I had found a few bikes that were new that were cheap.  By cheap I mean sub-$500.  But after some discussions with some cycling folks, it was determined the parts were somewhat crap.

So that left me at a physical bike shop.  I tried a few local places for a used bike, but they were all WAY too expensive.  I tend to shop quite a bit at Performance Bike, because it’s super-cheap.  It’s also a 10 minute drive from my house in DC.  Even better they have a number of places in Seattle.  I also like the fact that they will perform maintenance on the bike for free for life.  That’s really handy since I’m not quite adept at all things bike yet.

The cheapest road bike they had was the Fuji Newest 3.0.  Weighing in at $450 (on sale, which is every other week), it seemed like a viable option.  Adding in a slew of Performance points I had (credits basically), it would bring it down towards $375.  At this point, short of the thing falling apart before I left the store it seemed like a good deal.  So I bought it. 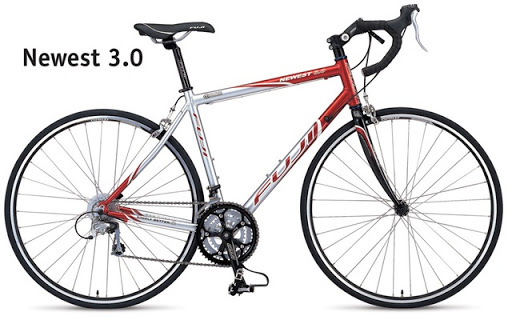 The major parts are:

After about 200 miles on the bike (spread out over a few months) I’m not entirely sure I made the right decision.  Sure the bike works fairly well and all.  And I can certainly keep up with folks I ride with in Seattle.  But there are a number of little things that I don’t particularly like:

Now – to be clear: The bike is perfectly fine for a secondary training bike in a remote city and I even used it in a sprint tri race.  But it’s just a lot of little things that are annoying.  I can’t say I ‘look forward’ to riding it.  Once I’m on it, it’s fine.  It would probably be good for a first time road bike person who isn’t sure they want to enter the sport and you don’t want to spend a lot of money on a ‘lost cause’ so to speak.  So that’s something to consider.

But I don’t get this overwhelming urge to just go ride it for the fun of it.  In retrospective, I somewhat wish I had spent a few hundred more dollars to get something that I would be ‘happy’ with.