A Trifecta of Fail

The last three days leading up to Friday the 13th have not been particularly successful in the DCRAINMAKER world. Let’s do an instant replay – shall we? All aboard the failboat for this three-day tour: 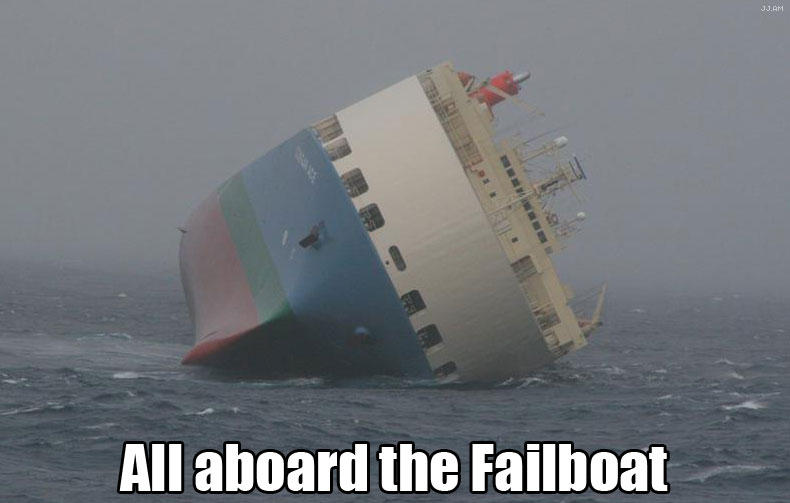 Tuesday (Day 1 of the Trifecta):

Things are cruising along just dandy as the work day progresses. The work backlog from the weekend and Monday has mostly cleared out and I’m just settling in to start on some new fun stuff. And then I hear a racket. People screaming, hollering and just all in panic mode. So… I do what I do best – I ignore it.

Then folks come running by my little cube yelling about smoke and that we should evacuate the building. Ok…sure…whatever. After a while they get fairly serious, and the fire alarm got kinda really annoying (like the lady who just won’t shut up at mile 22 of the marathon last year). So…eventually I left the building (laptop in tow of course).

Upon arriving outside, there’s a gazillion fire trucks (well, 12 actually) and the smell of burning electronics. Not ideal. My building caught fire. A little fire, but a fire nontheless. And while it was little – it wreaked havoc on my life for the remainder of the day as we had to get humpty dumpty put back together again.

So…with that – I present Tuesday’s Theme of the Day – Fire Fail: 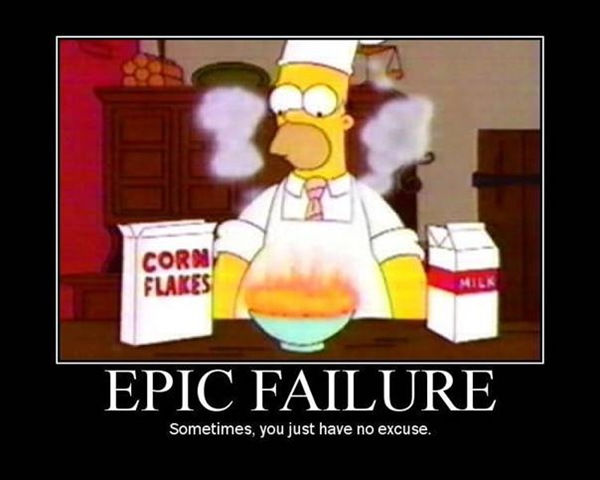 Wednesday (Day 2 of the Trifecta):

With everything technologically all settled by late Tuesday night, it was time to dig into the ‘fun’ that is the aftermath of a fire. Lessons learned, blah, blah blah. Got all that wrapped up and then headed out to the pool/rec center late afternoon. Sometimes my laptop doesn’t quite kick into standby like it should. Usually that’s alright though, it’s not a huge deal – it works itself out.

Well…Wednesday…not.so.much. After about 90 minutes in the pool, I get out to the car (it’s about 95* outside, and about double that in my car), and head on home. I get home and toss the laptop on the table to have it start syncing mail. Except…it’s dark. Nobodies home inside Mr. Laptop. It’s playing dead.

After a fair bit of troubleshooting and taking things apart, I determine my hard drive has died. I tried a slew of tricks (freezer, oven, whacking the crap out of it), and eventually got it back up and sorta working, only to have it die again. Kaput. No more hard drive. This sucks. My entire life revolves around my laptop – EVERYTHING is there. Luckily, by some random-ass stroke of genius I actually backed most everything up fairly recently, so my losses were remarkably trivial.

I then spent the remainder of the night (another 4 hours) getting my backup laptop (I umm…have a lot of laptops for work) up and running. I hadn’t used it in a while, so it’s kinda like moving into a new place. Just gotta paint the walls and such. By time about 1:30AM or so rolls around, it’s good to go – and off to bed I head.

So in summary, Tuesday leaves me with one dead laptop hard drive (my primary laptop). We shall call this: Laptop #1 Fail Thursday (Day 3 of the Trifecta):

Ahh…the birds are chirping, and it’s a new day. I pack up my work backpack, my running bag and my swim bag. In my other hand I’ve got my secondary laptop as it finishes doing some syncing over the wireless network. I head downstairs into the garage to the car and I realize I’ve still got my bike in there from last night. So I drop the bags and place the still running laptop on top of my car. I get the bike out (and the new race wheels), and then toss the running bag, swimming bag, and work backpack all into the car. Open the garage door and out we go. Head out between the rows of townhouses and start to depart the neighborhood. It’s as I corner at about 20MPH that I notice a gray flash out the passenger side window.

Odd I think… must have been a bird or something.

And then I notice in my rear view mirror an object on the roadway. Strangely very much looking like a…CRAP!!!!…DAS LAPTOP!

As I stare into the rear view mirror admiring my laptop on the ground I notice a new issue.

I get out of my car to go retrieve it and the car guy stops and says (in Dell-dude voice):

To which I respond:

Off to grab the remains of Mr. Laptop. As I get to the scene of the crime, I note he’s pancake flat – like throwing a rag doll across the room. But by and large, he’s in one solid piece. I pick him up…and he’s still running! He’s got some really nasty road rash, and chunk of him its MIA, but otherwise, he seems relatively content.

Upon getting to work, I notice a few other issues. The monitor won’t stand up anymore, the whole left side has been injected into the case. The “W” key won’t stay down quite right. And he won’t play with any mice I add. But otherwise, he works peacefully for the rest of the day.

Here’s some after-shots. My favorite is the error message displayed in the lower right hand corner right after the ‘incident’. Also note the road-rash on the screen. It actually continues all the way across. 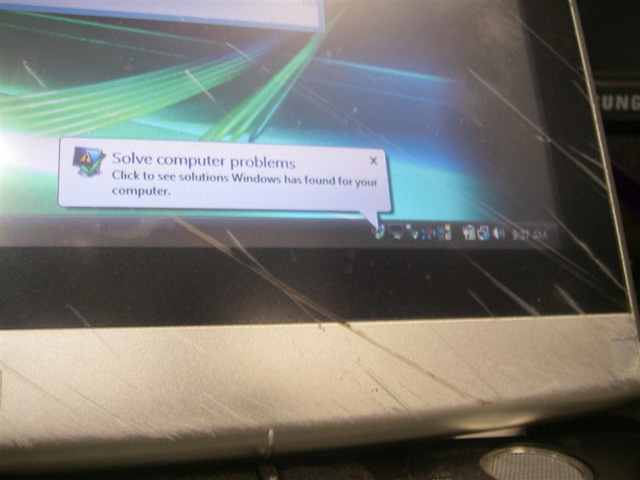 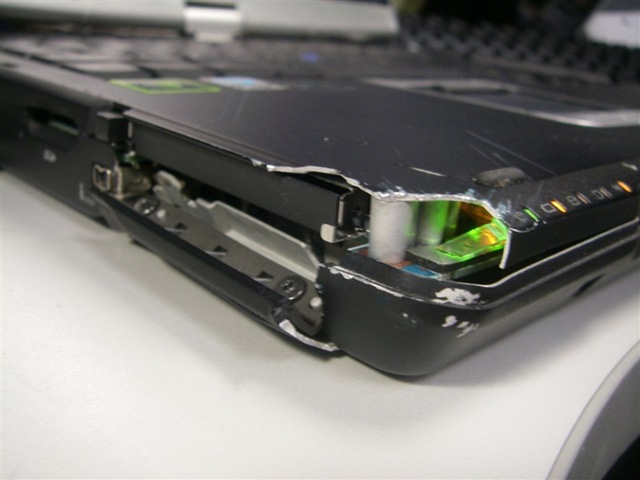 This day would be deemed “Laptop Car Fail”:

At work I used a pretzel jar to hold up the monitor. But once home, I transitioned to duct tape while I prepared the third laptop this evening of the last three days. With the duct tape in place, it works quite well actually. 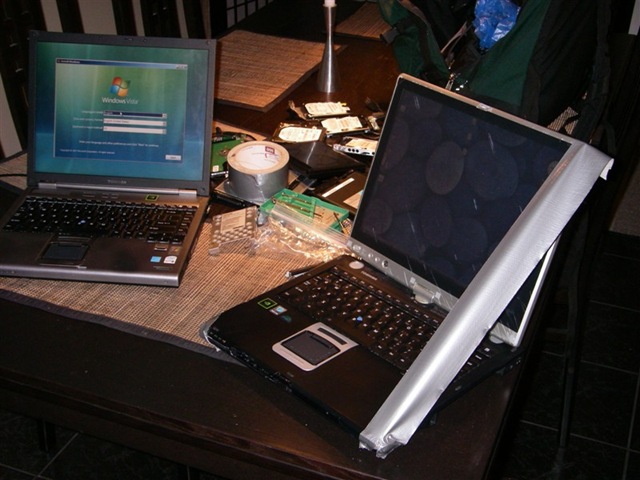 So with that, I finish up my fail trifecta…yes..you can stop laughing now.

To make this post at least semi-triathlon/running related, I did have some success in those athletic venues over the last three days:

Tuesday: Ran a 10-miler finishing just minutes before nasty T-storm, then got on the bike and knocked out 30 minutes on trainer.

Wednesday: Swam 75 minutes, then did an hour of trainer fun (high wattage & high cadence). And then got the new race wheels all put together with the tubulars.

Thursday: Ran 10 miles on the track. Sustained very very solid numbers on some of the longer segments (4400m & 3200m and then subsequent 1200M rocked), despite the oppressive heat and humidity at 5PM. Then had ‘fun’ in the pool for another hour of back and forth. Oh…and I’m writing this on laptop #3. And laptop #4 is being shipped from the factory tomorrow. Woot!

So yup, that’s where I stand. I’m trying to get caught-up to all you folks who I follow in blogland, but half of the blog’s I follow is on Google Reader (online) and the other half is not online. Obviously one half of you is getting hosed. Sorry.

Have a good Friday the 13th!