After removing my wetsuit in T1 during the Nation’s Tri on Saturday, I left it in the transition area for the rest of the race (dragging it along on the bike or run didn’t seem like it would improve my pace, unlike during the swim).  As one would expect, it was mostly dry by time I went to pick it up a few hours later.  I tossed it into my transition bag and then headed home.  When I got home I unpacked everything and threw the mostly dry, but slightly moist (although not dropping by any means) wetsuit over the shower bar and just left it there.  I was feeling lazy and didn’t wash it right away.  Later that evening I returned to the shower area and found the below pictured brown sludgy drops below the legs of the wetsuit.

Now let’s be clear – we’re not talking watery brown drops.  There was no liquid in these drops, they were almost three dimensional in nature – thick blobs of browness.  Yes….these were special presents from the Potomac. 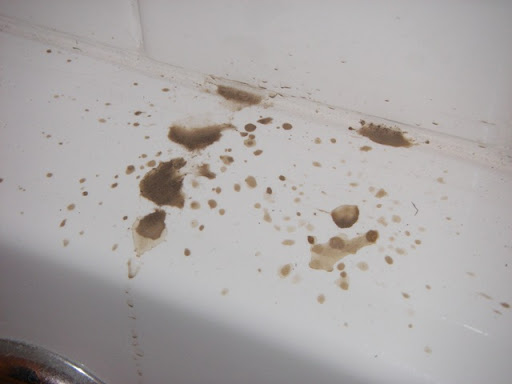 I went ahead and figured it would then be an opportune time to give my wetsuit a friendly little rinse/bath.  I turned on the water and ran it through the neck and out the legs.  Brown water.  Tons of brown water.  It took five – yes FIVE – minutes of constant running water to get the water to be semi-clear coming out the other end of the wetsuit.

Let this be a lesson kids – when the National Park Service says the water isn’t exactly safe for swimming – it means it’s not happy water for your wetsuit either.