Last week following the Nation’s Triathlon, I stumbled on some pictures on Flickr from the event.  There was a huge assortment of pics taken on that day – ones of athletes during each of the sports, a few artistic ones, some general group shots and then a few of the river.  It was one river shot in particular that caught my attention.  This shot (below) clearly showed the massive differences in lines that people took as part of the course. 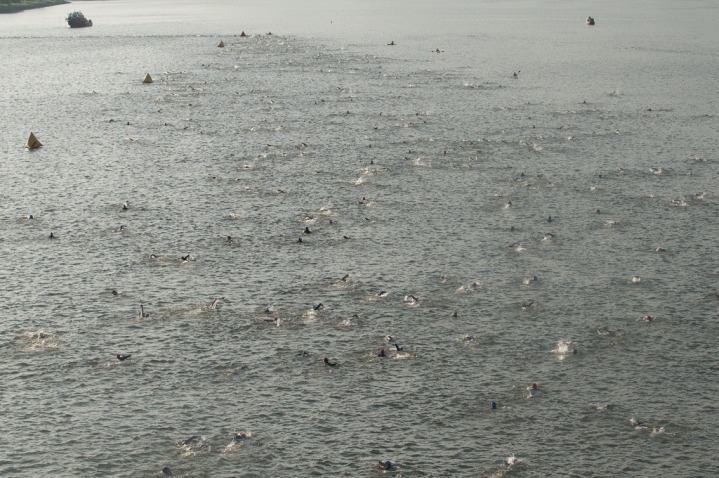 So I contacted the photographer (Jim Tavenner) and asked if I could use it as the center of a post.  He graciously said no problemo (go check out the rest of his photos from that day!)

See, the photo is interesting for a number of reasons.  First, it shows the huge differences between the lines people took.  Second, it was taken from an elevated position (the bridge), which makes it really easy to see the whole section of the course.  Third, you can clearly see the number of folks who are struggling a bit (looking at their stroke/position/treading water).  Finally, it was taken later in the the swim (8:22AM), which means that the majority of folks pictured here are likely from earlier waves and are swimming a bit longer than faster swimmers.

That said – let’s start with the official course map as a reference point: 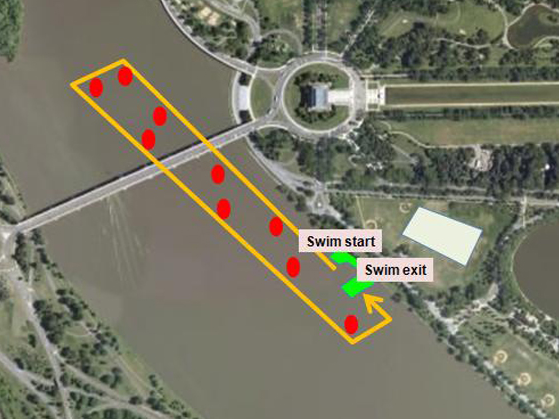 Remember how I wore a Garmin 310XT in the swim?  Well, it recorded a pretty darn clean track – see below.  As you can see the exact real course was a bit different than the above (in both placement and quantity of buoys).  For example, I’m relatively certain there were only two total buoys north of the bridge. 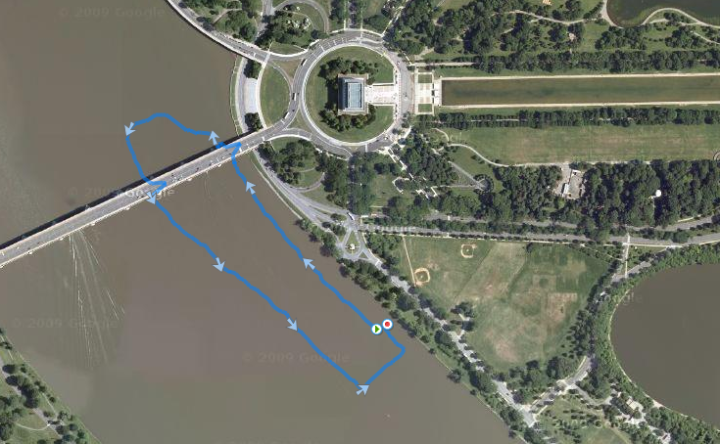 So I started thinking – what if I combined the earlier photo – with a known track used on race day?  Well, first, let’s start with something easier – let’s take my Garmin track, and run it through Google Earth, and then change the point of view to match the photo.

This below is looking downriver, including the bridge. As you can see, the GPS signal drops out when I go below the bridge, which is fine.  But what I want you to notice of, is the pillars – as that starts to dictate some of the course line that folks will take.  In particular, the right pillar (which is when we start heading downstream). 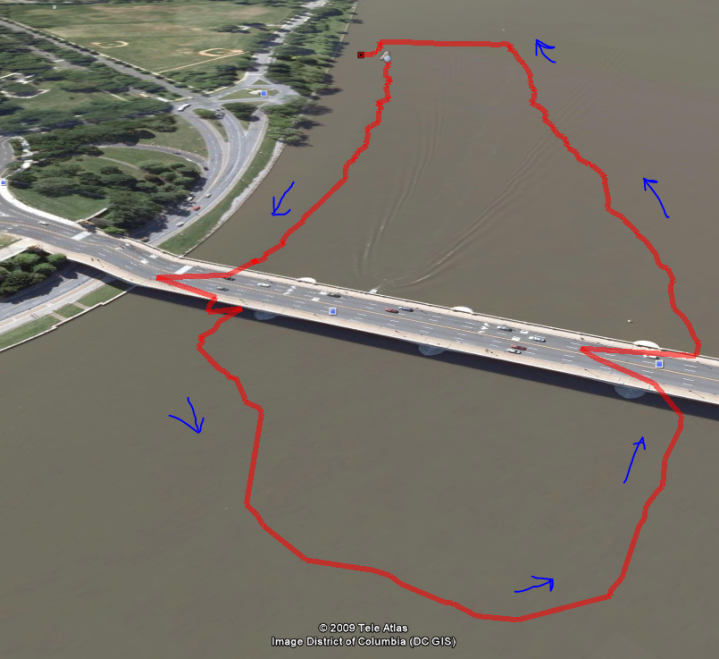 Now, let’s zoom in a bit, to mimic the photo.  I kept the land portions in-frame so things are a bit easier to understand. 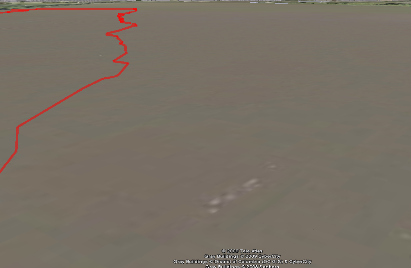 Now after a lot of aligning, re-aligning, more aligning, and a crapton more aligning, here’s the two images merged together.  My photo-shop skillz are limited, so the line is a bit faded, but still very visible: 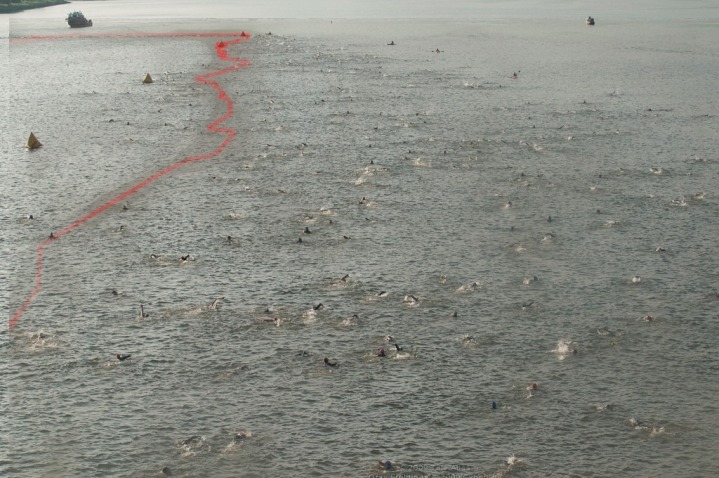 While it’s not ‘perfect’, it’s about as close as I can get after an hour of toying with it.  So, what does this show us…aside from my line?  Well, for that we need to bring a really big tape measure into play here to understand some distances.  The cool thing about Google Earth is it includes a ruler to be able to determine how long something is by simply dragging. 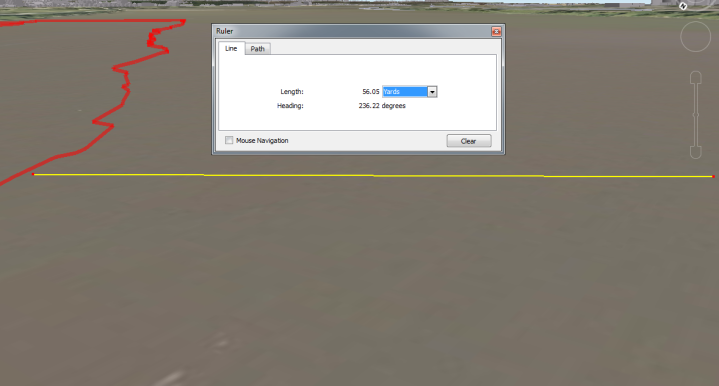 I took the ruler and then spread it across the width of the ‘screen’ – or essentially the photo (yellow line).  56 yards, roughly.  I say roughly because I don’t have the precise elevation/lat/long to be able to exactly align the photos.  But to me, 50 yards passes the reasonable test looking at the people in the river.  Probably a bit more than that – but we’ll use that as a ‘minimum’.

So…let’s talk about what that means.  See the folks to the right of the yellow line? 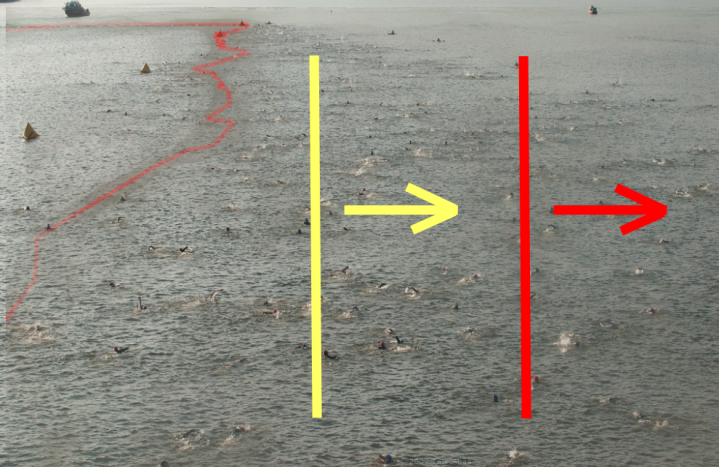 They likely all swam about an extra 50 yards round trip. And the folks to the right of the red line?  About an extra 100 yards roundtrip.  And that’s just on the downriver leg – without taking into account the other 2/3rds of the course.  Now, they do save a bit of distance as long as they swim a triangle pattern (remember A^2 + B^2 = C^2?).

So how much extra time does that equal? I’d guess at least a few minutes for most folks, not including time spent swimming over/under others (as you can see – plenty of others), and then sighting, etc..  You can see a number of the folks off to the right treading water or looking around trying to figure out where to go next.

Now, that’s not to say my line was perfect – in fact far from it.  You can clearly see where I did a wee bit of wandering – especially if you notice my lack of ideal line on the upriver leg earlier on in the satellite photos.  But one thing you’ll notice is that I don’t actually hit up those first two buoys in the above photo – this is because from a line perspective, it just wasn’t the most efficient line.  This is primarily because of the support columns for the bridge, and simply the placement of the turn buoys upstream.

Anyway, when I saw the photo I figured I’d be a perfect opportunity to dive into how much time can be saved simply by swimming the most efficient line.  Which…reminds me – the same concept applies to running – where I did a similar breakdown of how running courses are measured.  Lastly, thanks again to Jim Tavenner for allowing me to use his photo.  Have a good one everyone!