Racing the line – understanding how courses are measured

Last week on one of my review posts, someone asked why their Garmin GPS showed a longer distance than the actual course distance of the National Marathon.  Of course, there are two possible explanations, but likely only one is the case.  The first is that due to a race-day placement issue – a cone, turn or otherwise – was incorrectly executed.  But the second and more likely explanation is that you ran longer than the official course distance.

How is that so you might ask?  Well, it takes an understanding of how courses are measured.  The good news, is this topic is documented in incredible detail on the USATF site (some might say painful detail).

The first step in the process of getting a course certified is to fill out this nifty registration PDF form with USATF (USA Track and Field).  However, the real meat of the course certification process is actually measuring the course by a certified measuring person.  This is all contained in a sizable 1MB PDF file.  And it’s in this document where the gooey details are.

For example, let’s look at a simple two-turn case.  In the below scenario, the actual course distance is officially measured 30cm from the curb.  The total course also has a .1% error factor (added to it to ensure it’s never short).

(Taken from page 19 of the USATF measuring manual)

Now imagine the typical case where a few thousand (or tens of thousands) of runners are running the course, where will you likely end up?  Probably the red line instead.  Weaving and swerving around runners.

So how much extra does this one measly turn add?  Well…we’ll get there in a second.  The next scenario to look at is the twisting road case.

In this scenario, the official course cuts the corners.  But in real life?  You’re likely swaying through the full width of the road with a few thousand of your closest friends.

Now, let’s see how this all adds up.  I went out to my street and measured a simple turn – just like the first example above.

First I measured the inside of the curve.  There were actually two successes there – one in getting the measurement, and two in not getting hit by a car.  That would have been a fail. 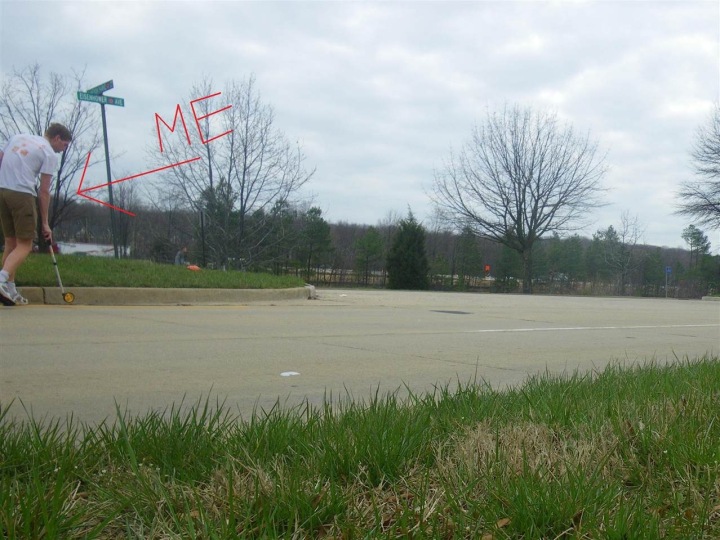 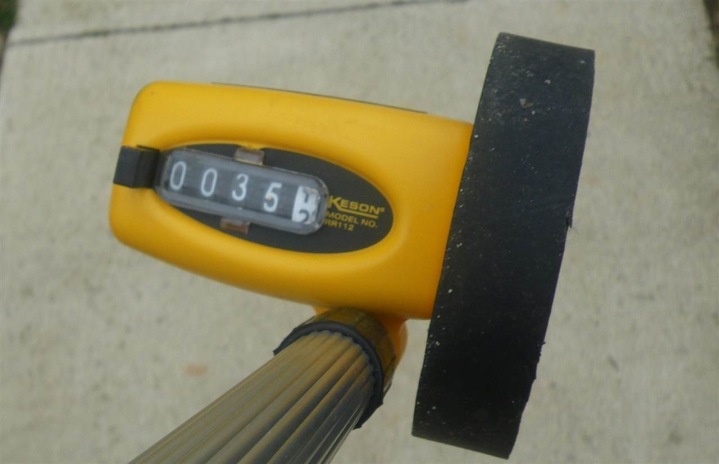 And then I measured the outer edge of the curve. 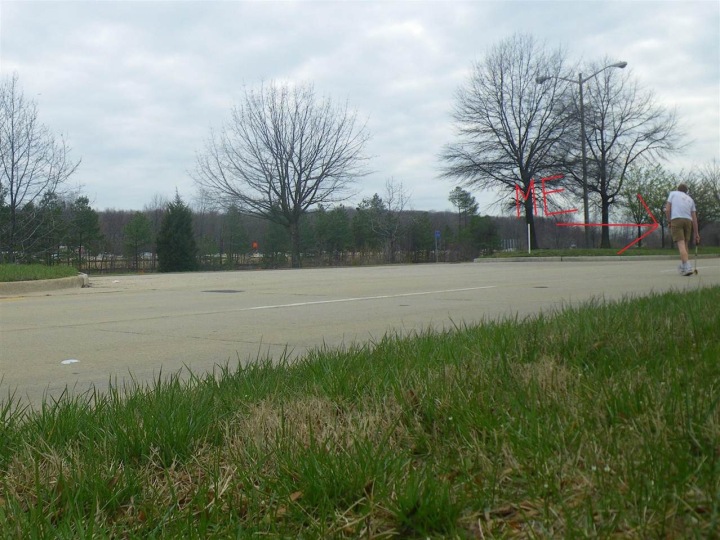 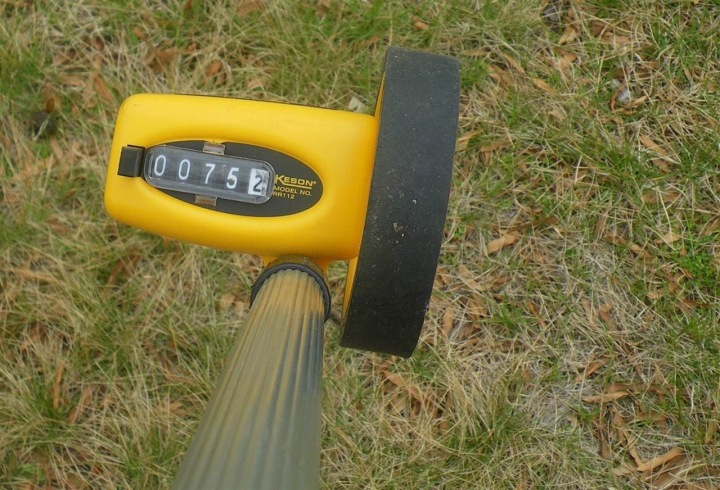 From there, these are what the numbers look like: 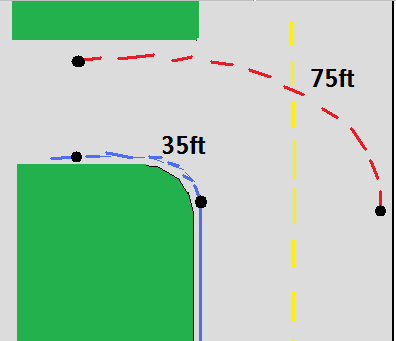 Yes, I’ll give you a moment to continue admiring my mad paint abilities.

Now you say – so what, that’s only 40 feet?  Well, next we pull up the course diagram for the National Marathon this year.  You can search all certified courses here.  From that we can pull the official course map. 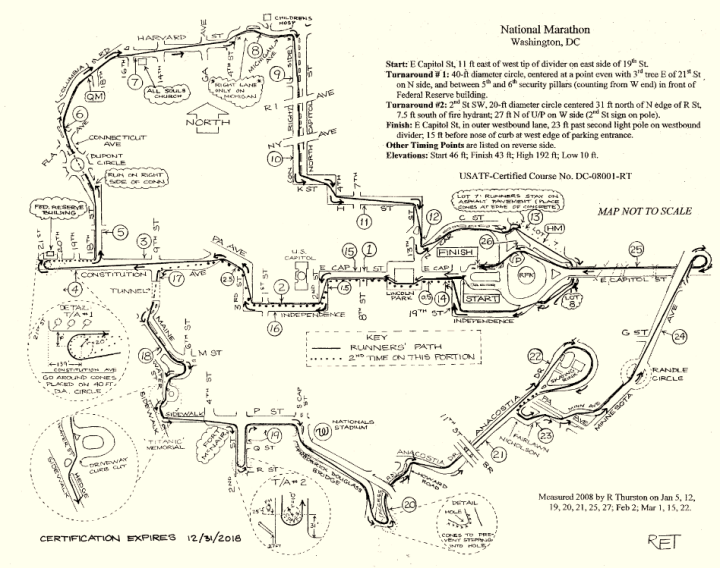 Of course, I could count all the turns.  But I’m lazy.  I happen to know that the National Marathon also listed them all out on their website to make things kinda simple.  Each turn had someone there to help runners along.  In total, there were 64 turns on this course.  They add up pretty quickly, don’t they?  They also list them on this map in small print next to each turn.

Now, my math only is for a simple kinda skinny two-lane road.  In the case of National, it’s actually a four to six lane road in most cases, plus curbs, making for 2-3 times the lengths I discuss.  But we’ll stick with my measurements for the point of this.

Oh, but here’s the best part, we haven’t even accounted for all the swerving you do.  How many times did you hit up the water stop on the opposite side of the road because it seemed more interesting (yes, I have)?  Or go around a pack of runners?  Or just switch sides to give a bunch of kids high-fives?  Yup, they all add up.

Imagine if you had that extra half a mile back?  That’d be probably 5+ minutes for most runners on a marathon.  A fair bit, right?

Here’s a quick snippet from MotionBased.com for a bunch of people who have uploaded their runs.  I did note there is an interesting pattern that faster runners tended to run less (either due to less congestion, or running a straighter line). 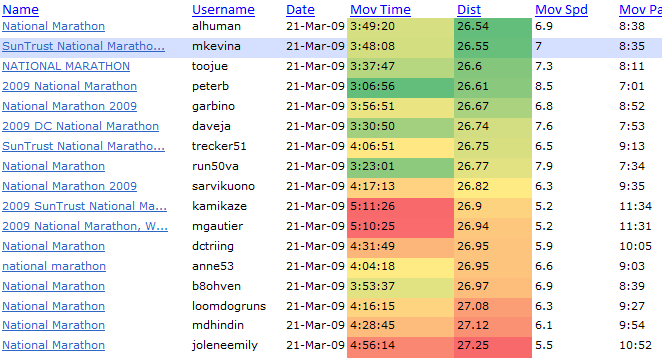 (Green implies the shortest or fasted, and red implies the slowest or longest.  Note it’s just automated Excel gradient using the values provided – not saying that 5 hours is bad or anything.)

Finally, there’s actually one additional explanation.  Different software programs use different algorithms to determine how far you ran between GPS track points.  Your GPS file is actually a bunch of ‘track points’ – like a breadcrumb trail.  And software (either on the device itself, or your desktop) interpolates all that and determines how far you ran.  Some software is smarter than others, and can remove erroneous data points (for example, going into a tunnel you occasionally get incorrect data points on the exit from the tunnel).  So I often see cases where my Garmin on the watch will say one thing, and on Sports Tracks it will say something else.  Generally Sports Tracks is smarter though…  Obviously if you have a foot-pod based system (i.e. many Polars), then the GPS variance won’t apply – but running the wrong line still does.

So, the point being if you’re off by a little bit, it’s probably not because the course is mis-measured, it’s more than likely you simply ran a little bit extra. 😉  Think of it as extra training in the bank…

And for those curious – I ran 13.2 miles at the National Half this year.  So, relatively close all things considered.  But that still would have cost me in the neighborhood of about 40 or so seconds.  Win some…lose some.