How far would you go?

A few weeks ago when I resumed my interval training I was reminded that I hate running in circles around the track.  It’s about as enjoyable as running out of TP at a gas station restroom in the middle of the night.  But…(ok, bad choice of words), I realized that where I work I have a great two mile path through nice wooded area (paved in fact).  I even regularly run across little bunnies and deer.  Well actually, a few weeks ago I nearly ran right into a deer.  And it had big pokey antlers – they would have hurt.  Scared the crap out of me.  And I don’t think Mr. Deer was happy either.

The two mile loop basically has a 2/3 mile hill going up, a flat section, and then a 2/3 mile hill going back down, and then another flat section, roughly making a big squarish course.  The flat section though is PERFECT for intervals.  The path is dead quite, and the trees protect it from wind.  The ground is nicely paved and nearly perfectly flat.  It’s mostly straight with a tiny bend in it.  So a few weeks ago I roughly measured out a chunk of it and did some intervals there instead of the track.  Much better than going in circles.  But I wasn’t satisfied with my measuring technique (GPS), because it’s susceptible to some interference with trees and stuff.  I had to find a better solution. 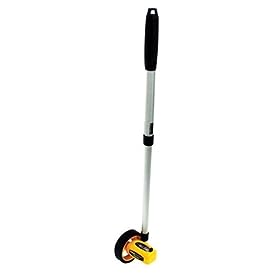 For only $27 on Amazon, I got myself a real-life wheely thing.  Ya know, the evil contraption that your cross country coach had when you were in school.  Yup, good stuff.  I’ve measured all sorts of completely useless things, like the distance from my couch to fridge, the distance to the mailbox, and even tried to measure the ceiling last night.  I of course also measured out 400m in 100m increments on the path (but let’s be honest, that was very secondary to finding out how many feet it takes to get from my bed down the stairs to the fridge).

It’s really compact and folds into less than 11″ in length (but expands to 36″) and only a few inches across.  You just roll it along and it measures for you, in as little as 1″ increments.  Amazon’s web page text is wrong, the unit will actually measure 9,999 feet before you have to start over (not 999 feet as they say).  But I only need it for 400m chunks, so that’s not a problem.

As for the contest…. dang, a certain someone (aka Bob) figured it out way too fast for their own good (congrats though!).  Given the responses scattered about during the day, I figured it would take at least week of tiny clues to get it.  But, Bob decided to vote everyone else off the island!  I’m still working with United on some of the tiny aircraft logistics, hopefully that will be all set in the next day or two.  My brother and I both scuba dive, and there’s some pretty cool dive (and non-dive) spots there – in particular, Jellyfish lake.