How I attempt to balance nutrition and sport

Before I get into the fun part – let me explain upfront that I’m not a nutritionist, I don’t play one on TV and I didn’t stay at a Holiday Inn last night.  So, anything I note below is simply what I do, and not necessarily the ‘right’ thing to follow, or even the half-right thing to do.  But, it’s what I do.

With that out of the way…

There’s a MILLION books out there on nutrition, each offering their own opinion on the right way to eat for every conceivable activity or lifestyle.  And there are certainly a large number of books focused on nutrition not just for runners, but also for cyclists, triathletes and even endurance sports people specifically.  All of that is fine and great, but it also tends to be a lot of advice – both conflicting advice and occasionally synchronized advice.

I get a lot of questions on exactly what to eat, what to drink and also what to avoid.  And I’m fairly certain I’m not the poster child for ‘perfect eating’.  I’ve alluded to it in the past, but I didn’t always used to be a ‘lanky’ runner.  In fact, after high school for about 7 or so years, I found a bit of extra weight.  Some 60+ pounds of it.  That’s all gone now – but that doesn’t mean I don’t enjoy food… a lot.  I love making all sorts of awesome creations, and I love consuming other peoples creations.

So I wanted to outline how I eat, and again, it’s not always the right way.  But it does keep me +/- 2-3 pounds on my weight year round.

There’s a lot of benefit to trying to study exact carb ratio’s, sugar amounts and everything else you might find on the label of what you’re about to eat.  I generally don’t do that.  I pretty much focus on two items and two items only: calories and fat.

Why just these two?  Well, simply because my little brain can’t try and equalize out the other ones.  And in general, I find that those are the two items that most directly affect my weight.  We all can generally look at an item and determine if it has carbs or not, it’s fairly straight forward.  And for most folks, eating like any average person, you’re probably going to get in the carbs you need for day to day training – and probably the protein too.  And it generally works out.

Further, it’s far easier to mentally track roughly how many calories I eat in a given day than track an Excel spreadsheets worth of stats like sodium, sugar, and carbs.  And in general, it’s calories that are fundamentally the basis for whether or not you gain weight.  There are certainly other items that can drive accelerations in either direction – but by focusing on calories, I can keep things simple in my little head.

Yes…I said it!  I don’t fret about high fructose corn syrup.  While HFCS doesn’t generally help the bottom line…err…ass, it also isn’t going to be the critical driving force between me (Ray) being overweight or not.

At the end of the day, I drink Diet Coke, Gatorade and whatever else floats my boat.  And it isn’t the exercise that helps to balance it out.  I can overeat on ‘healthy’ things without HFCS and see weight gains just as easy as I can with HFCS.

Yes, there are very real benefits to cutting HFCS and sugars out of your daily diet from drinks like soda, as they tend to drive cravings and feed a cycle.  But again, it’s not something I personally worry about day to day.

And while I’d certainly like to see less of it in foods, it’s not something that’s generally driving my day to day purchasing habits.  Again – back to the simplistic concepts: Calories and fats.

The biggest trick to ‘eating right’ is being able to look at a food item somewhere and being able to mentally break it down.  Take Subway for example – if you go to Subway you can mentally break down each and every component they put on your sandwich.  Can you do the same with the bowl of Chili from Wendy’s?

That’s my first sign.  That’s not to say Wendy’s Chili is bad – it’s just that if I look at it, I can’t tell how much butter fat or other mystery items are in it.  It’s just a bowl of awesomeness.  I want to be able to mentally break things down – even if the end resultant is that I’m eating something less than ideal.

Another example – Chipotle.  Your typical burrito is in the 1,000 calories range.  Some might say ‘Holy cow!’.  I say…ok!  That’s because I know what’s going into it.  I can see whole components like chicken, rice, beans, and so on down the line.  That’s something I can’t do if I order the 7-layer burrito at Taco Bell.

Tricks to filling up

I like to be full.  That’s just how I eat.  If I’m not full, I get antsy.  So when I go to lunch every day, I’m looking to come away from that full.  I realize that’s not necessarily ideal – but that’s just my thing. And it works for me.

The problem is, how do you fill up, without breaking the calorie bank?

Well, for me I tend to eat a chicken breast sandwich (with BBQ sauce!).  Most times that fills me up.  But sometimes I’m feeling like more.  Instead of grabbing the cookies, I might just ask for extra meat.  Meat like Chicken and Turkey is absurdly low in calories and fat.  And, because its protein, it’ll sit in your stomach longer and make you feel full (just like eggs).  So, I’ll happily make a 6” sandwich with double meat, instead of making a foot long.  That extra meat will fill me up at the cost of 100 calories, versus another 300-400 calories for the extra 6” sandwich.  Same concept applies if you get a foot long sandwich (which I do often) and go with extra meat instead of chips or cookies.

Organic is not always healthy

The biggest challenge we have now is that companies want to make us feel like we’re eating something healthy, simply because it’s organic.  There’s a difference between eating healthy, and eating what’s right for your diet.

Chipotle is a perfect example (again) of that.  Chipotle prides itself on fully organic foods.  Foods that fundamentally you can understand where each component came from.  But at 1,000 calories, they can also be a handful (quite literally).  I personally love Chipotle.  But I also understand where it fits into my diet.  It fits quite well if I’ve just finished a 20 mile run after a 2-3 hour bike and it’s 9PM on a weekday and I need something quick before I crash.  Yes, it fits very well there. 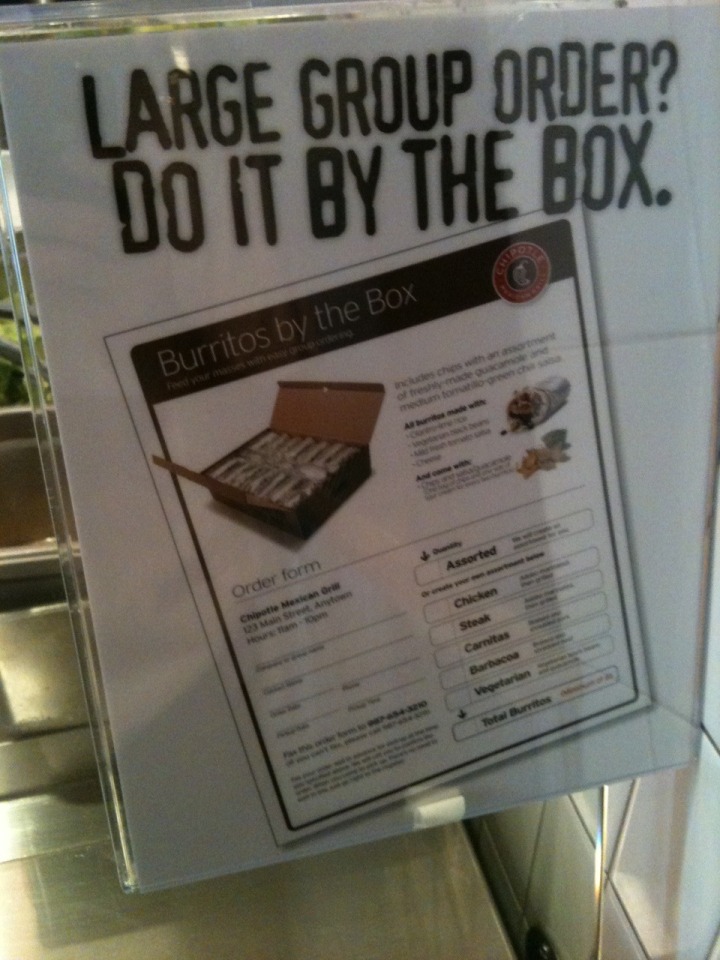 But it doesn’t fit well if I have it for lunch every day, or dinner every day.  That’s just too many calories for me.  Again, ‘moderation’ (people love using the moderation term) is key.  So how often do I eat Chipotle?  Probably once a week.  Same with The Girl.

Dessert (with two S’s thank you very much)

I love dessert.  I love making it, I love eating it (I need to go eat some now in fact…)

But I also understand it can make a dent on any caloric balance I’ve been holding.  So it’s important to look at the options you have when you shop.  For example – ice cream really isn’t all that bad for you in the grand scheme of desserts, compared to say, a stack of double fudge brownies or cookies.  Most cookies and brownies are so calorie heavy that you’re better off eating a few bowls of ice cream than just a single cookie from Quiznos (serious, those cookies there are 680+ calories…each).

It also doesn’t help matters that the Girl makes awesome desserts all the time.  But she’s also pretty meticulous in what she puts in them.  She loves seeing what she can get away with.  For example, subsisting skim milk for whole milk.  Simple things that in many recipes don’t make a difference. 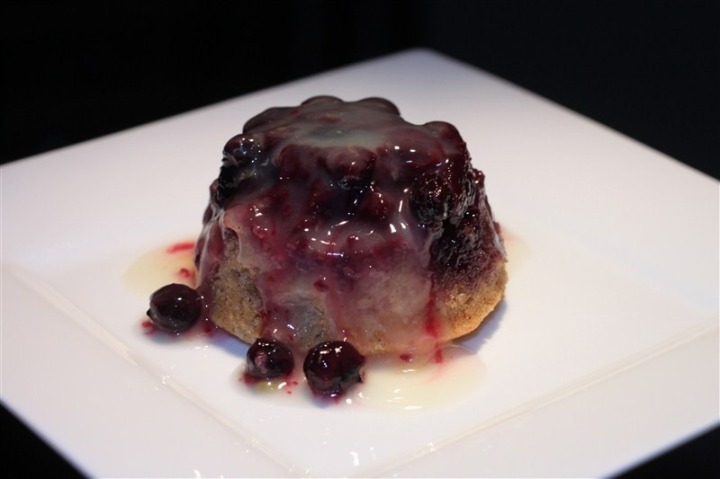 I also ‘budget’ for dessert in my daily intake.  Take the above creation The Girl made last week.  I ate a few of them.  But I also mentally planned for them each day I was eating them.  Simple things allow to you quite easily enjoy other awesome things.

When drastic times call for drastic measures, it’s time to maintain a ‘food log’.  That’s the term that nutritionists have come up with to replace the more scary sounding ‘calorie counting’.  But in effect, the concept is the same – and equally effective.

Even if you don’t log your food all the time, I find that doing it every once in a while helps to remind me at other times what might fit better into my daily routine food-wise.

Last but not least: Understanding the impact of diet on training/racing

Finally, and I want to cover this just briefly.  Understand that changes in diet will absolutely effect your training, and especially your racing.  You can usually shave a bit here and there during training – but going into race weeks I don’t fret about weight.  In fact, I usually gain a tiny by of weight going into a race week as carbohydrates retain more water and with less activity in the final few days, that results in a slight weight gain. But that also means I have a full glycogen load come race morning.  There’s no reason to starve yourself leading into a race, that’s just silly.

So, there ya have it.  My little world.  Yes, I do exercise a lot, and that helps – but that in and of itself isn’t what makes everything work out.  And while it’s not perfect, it’s what works for me. Well, that and the Withings WiFi Scale…that thing kicks my ass daily as a reminder. 😉