November 16, 2009 by DC Rainmaker|Central and South America, Mexico, and the Caribbean » Travel|Comments (8)

Our itinerary put together by Shark Diver called for us to leave San Diego around 6:30AM via charter bus.  We’d then drive South about half an hour, where we’d cross the US-Mexico border before continuing onto Ensenada, Mexico – the port we’re we embark on our boat journey from.

So around 6AM my brother and I stumbled down from our hotel room with more bags than we knew what to do with.  Somehow along the way my semi-impressive one-suitcase packing job had accumulated more bags than when I started – a rented UW (underwater) DSLR case from Marine Camera Distributors, a last minute bag of sunscreen and books from Target, and then a towel ‘on loan’ from the Holiday Inn.  However, after arriving at the bus waiting downstairs I found that the number of bags I had paled in comparison to everyone else. 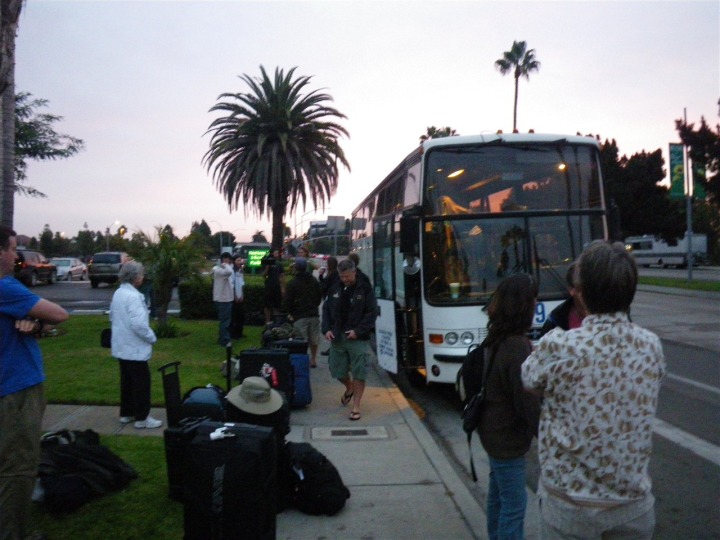 This was in part due to the fact that we had a film crew aboard, but also because a number of other professional photographers were on board, as well as folks who had simply done this before and knew the drill.  The lesson learned here: Don’t worry about bags.

After a quick briefing regarding getting used to the film crew, we boarded the buses and headed on south. 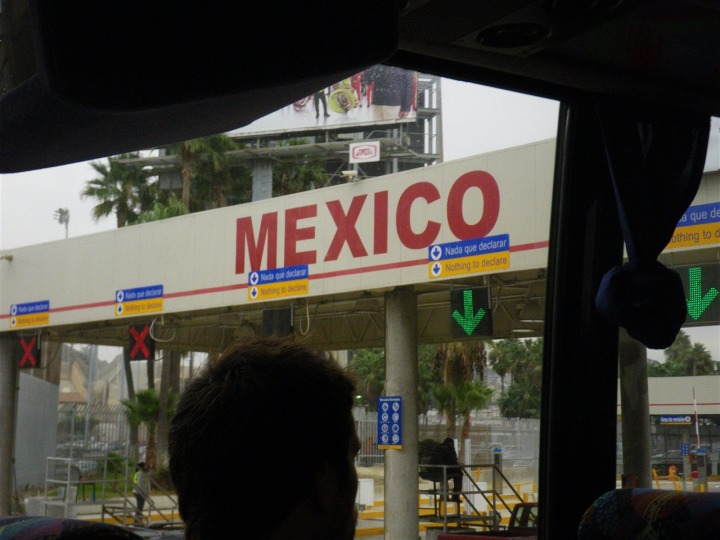 Our stop at the border was pretty painless.  Just filling out a quick visa application and getting a stamp in the ole passport, after which we were back on our way.

Like many oceanic coastal highways, this route down along the Pacific Coast of Mexico was full of impressive cliff drops and ocean views.  It took us about 90 minutes after leaving the border to get to the little town we were going to – Ensenada. 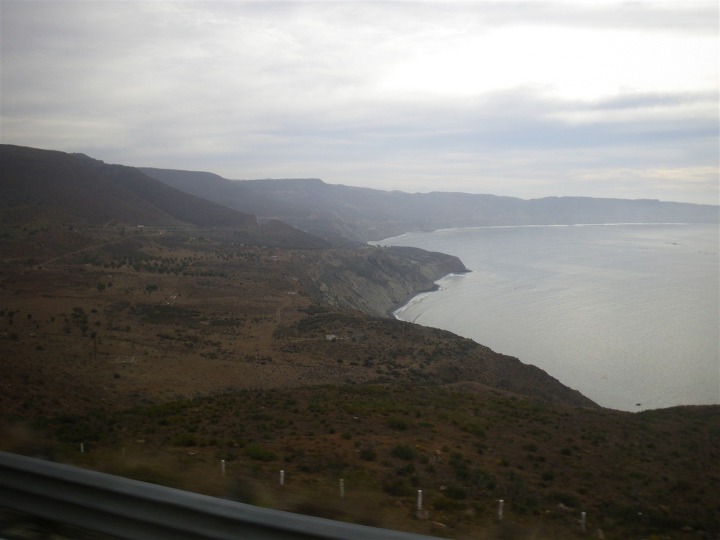 The Mexico government currently (though has not always in the past) requires boats going to Isla Guadalupe  to depart and embark from Ensenada – hence our departure point here (instead of San Diego).  This port city also caters to cruise ships, such as the large Carnival one that was hanging out nearby as we pulled in. 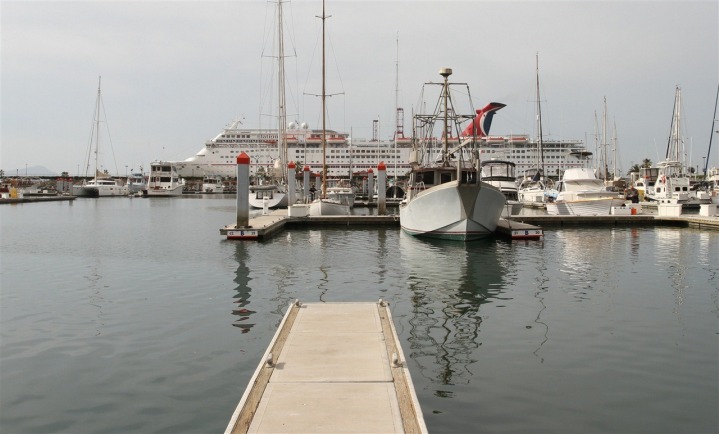 After a short drive to the pier, we began unloading all the gear from the bus and headed over to the boat. 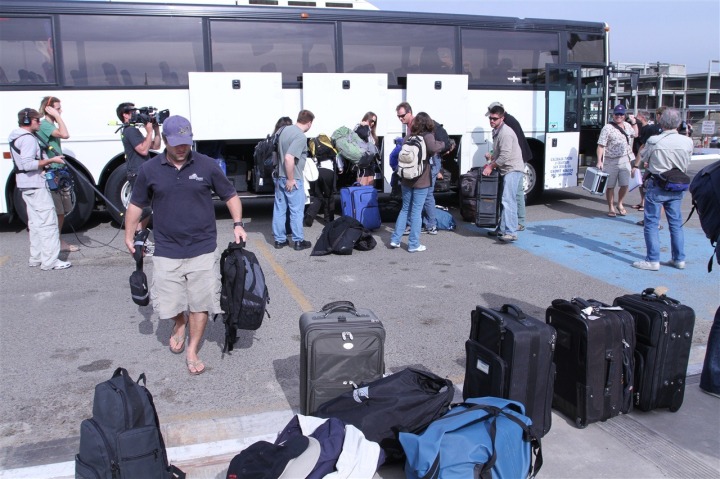 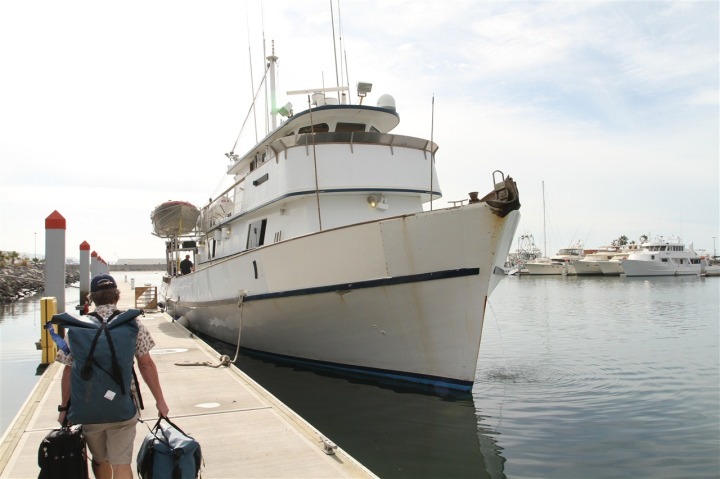 As we arrived onboard we were given our room assignments below deck and were able to get all of our stuff stashed away in our little staterooms.  And by little – I mean…little.  But, they work pretty well actually.  We had cabinets to stash stuff, and with only two of us in the room, the third bunk was free as a large stashing area as well. 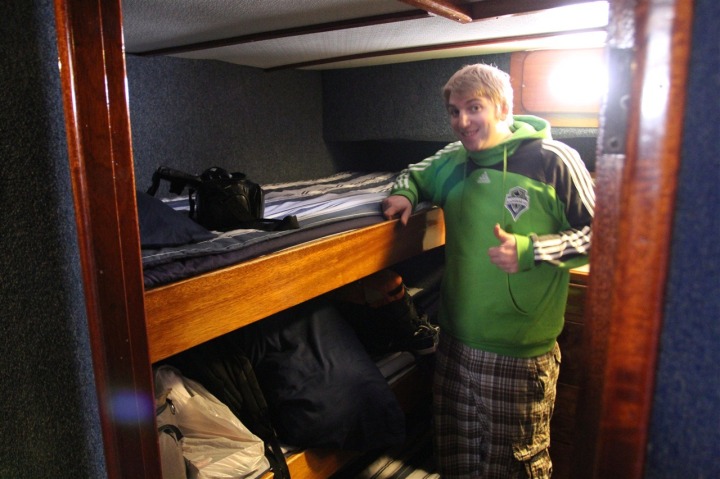 It was quickly evident by the smell though that something was up…no, really…upstairs something was smelling awesome.  Turns out breakfast was in order.  Freshly made pancakes with a blueberry topping.  If the food on the rest of the trip is as good as this first meal, it won’t matter how many sharks we see. 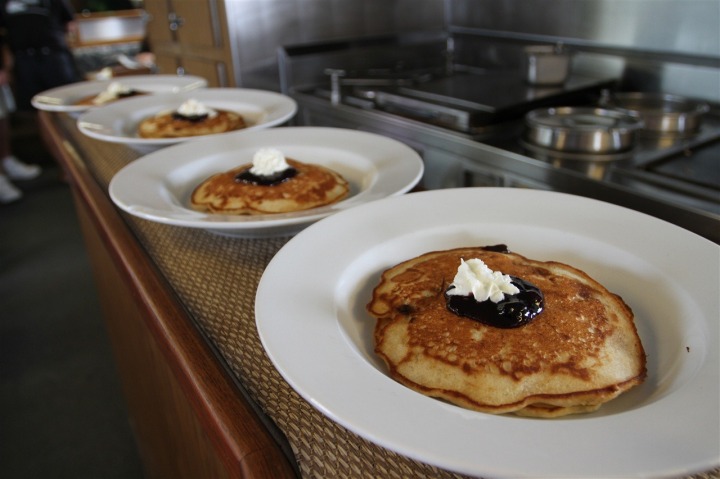 We hit a bit of a delay post-breakfast while the Mexican customs officials pondered the plight of the groups passports (see below), but after a few hours everything got all sorted out and we were finally underway. 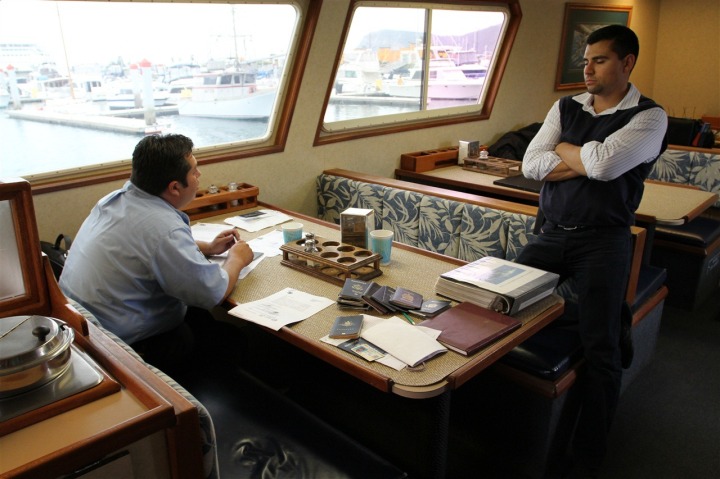 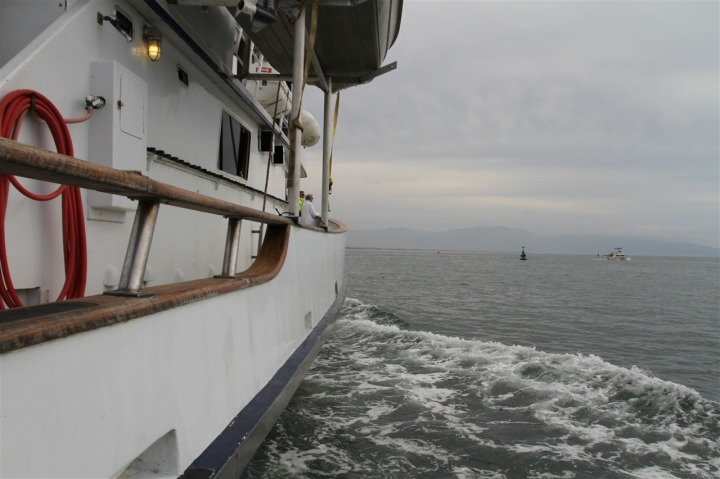 It was kinda cool while we departed as the film crew was deployed to a small dingy trailing behind the boat for some harbor departure shots, though they soon came back onboard.  Apparently they concluded that a 22-hour oceanic crossing would be less than ideal in a rubber boat. 😉 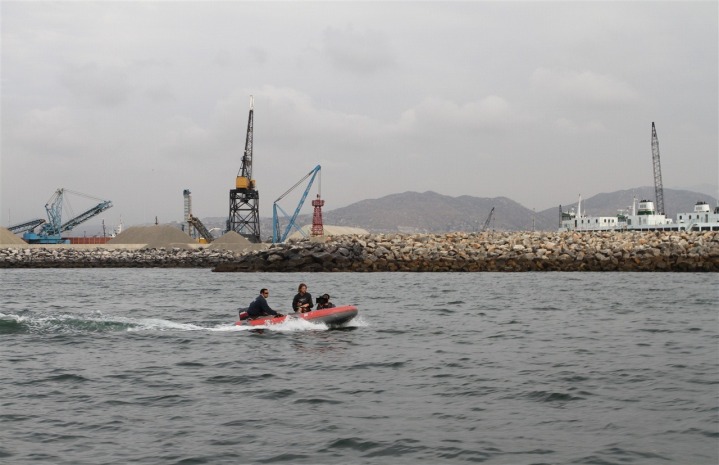 As we got cruising, the galley got cooking – again whipping up some great food.  Burgers were on the menu today for lunch, and it was probably the juiciest burger I’ve ever had.  I’m beginning to believe the galley crew needs to be taken hostage back to my place in DC. 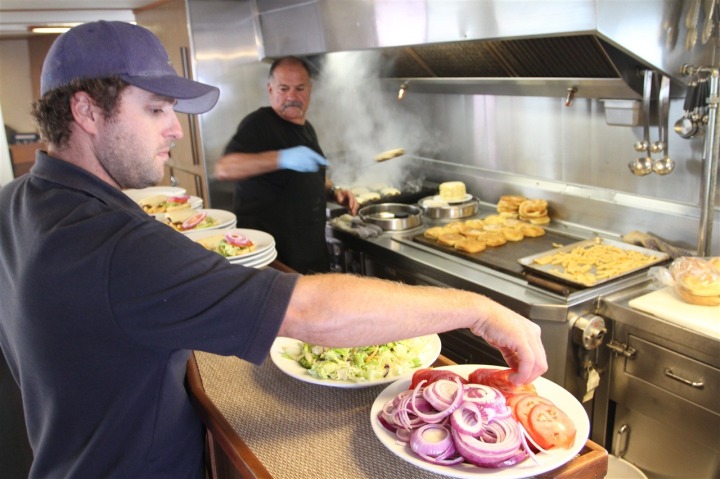 After that…it was just a lot of water.  Soon land disappeared from view and it became hours and hours of slow rocking and rolling.  If you are prone to sea sickness, this is not the trip for you.  But otherwise, it was a great time to catch up on books, movies, magazines…or simply sleep. 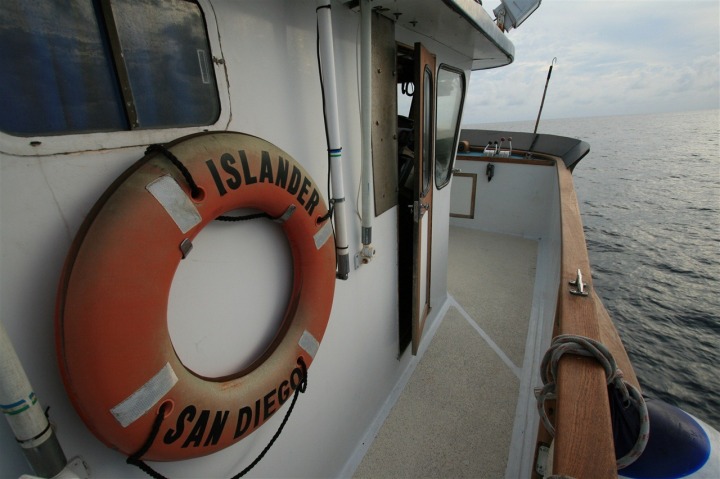 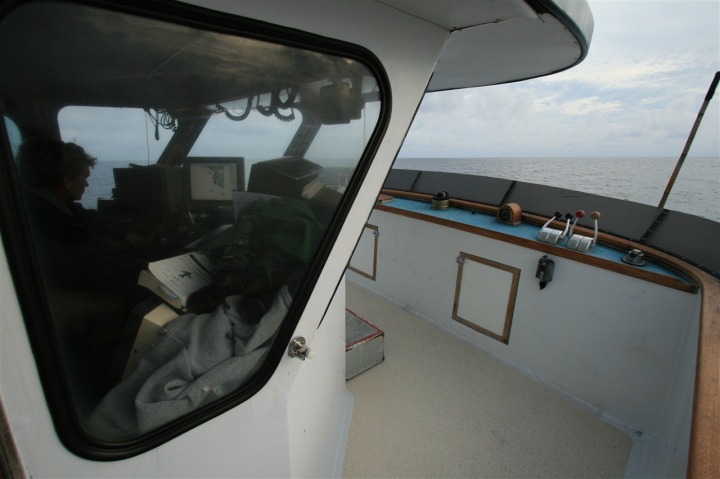 We also spent some time perusing through the gigantic shark book showing all the known great white sharks in the area, with details on how to identify each and every one based on various marking and features. 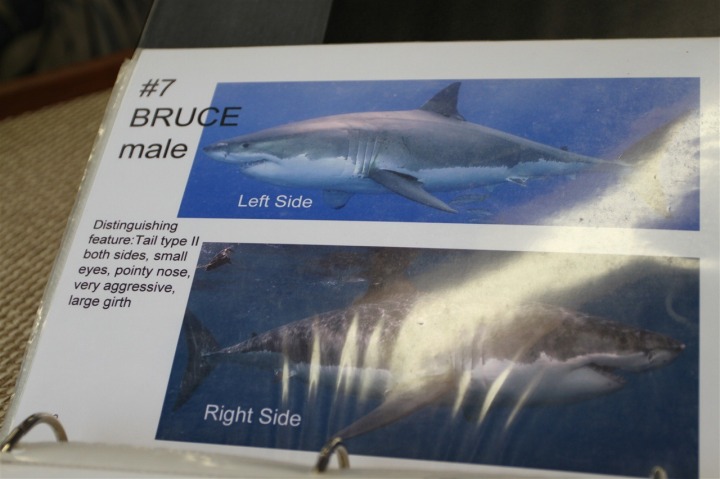 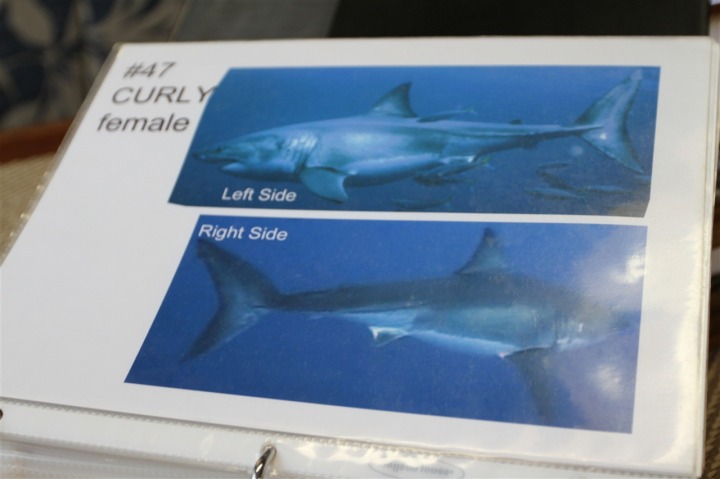 Around 5PM the sky started to shift to brilliant shades of purple, pinks and orange – really amazing sunset.  Oh, and none of the below sunset photos are retouched or modified in any way – straight from the camera. 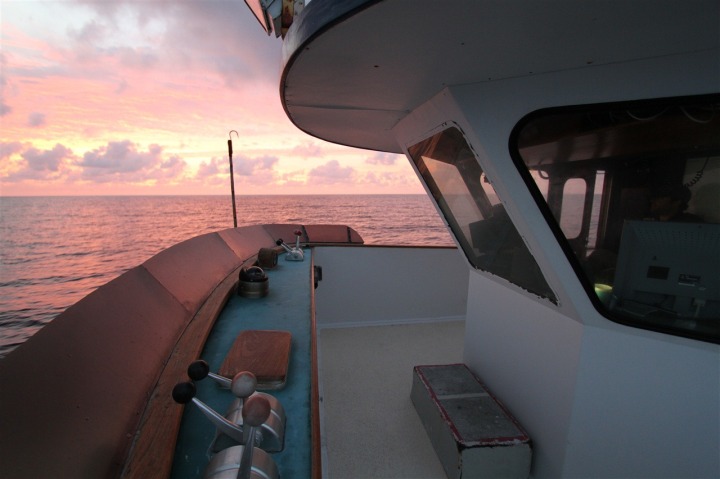 Folks congregated in the aft area of the boat near the shark cages (which you can see in the pictures below, the large metallic structures), as it provided a bit of a calmer ride than the front of the boat. 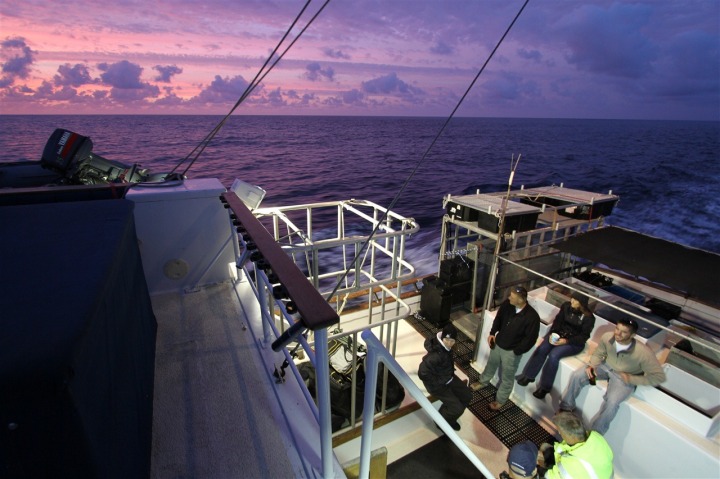 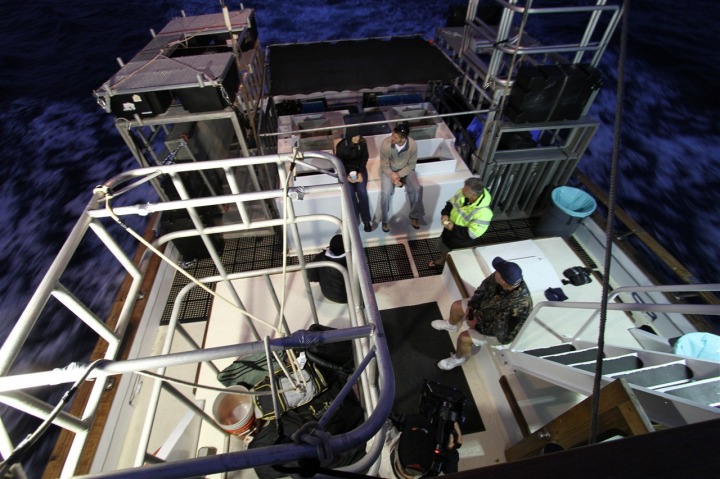 As the sun set in our path, the guys in the galley were in a rather festive mood making our dinner of fresh baked bread, salad, pork chops, and potatoes.  Here below Chef Rick is tapping the bread to see if it’s done. 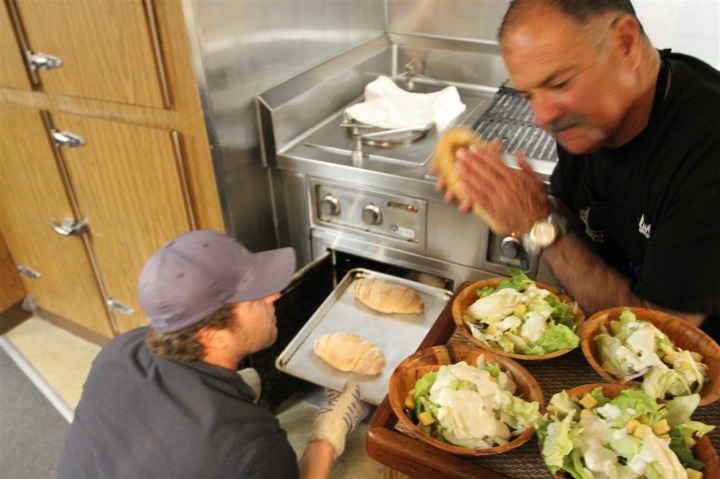 If you’ve read my blog for some time you know I love cooking and frequent some fairly ‘innovative’ restaurants.  I can say without doubt this was the most perfectly cooked pork chop I’ve ever had. Period.  Incredible flavor as well. 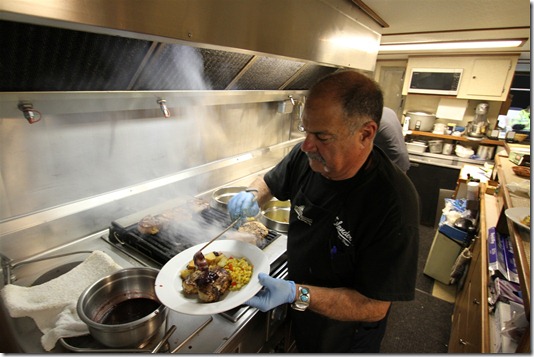 After dinner (and the Key Lime Pie), folks hung out on the back deck area for a bit with a cold beverage of choice, enjoying the relatively calm seas still at that point. 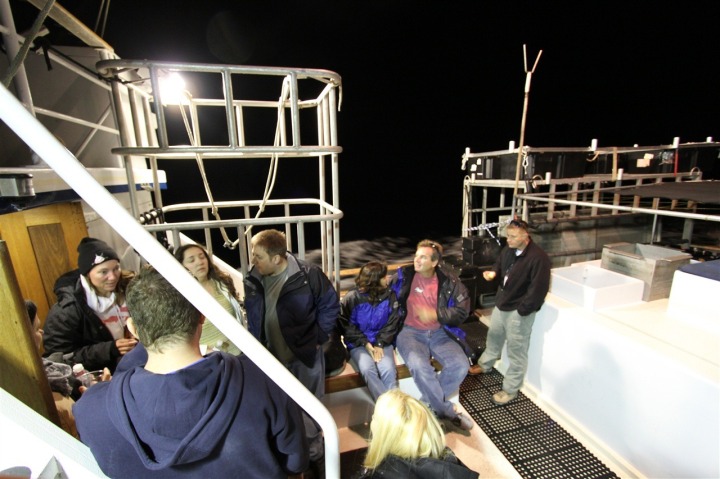 With that, it’s time to hit the sack – after getting up pretty early this morning, I’m hoping to get a solid 8-9 hours of sleep before sunrise tomorrow (which is rumored to be at 6:15AM).  Plus, we should be arriving at the island shortly after breakfast and we’ll have a full day of round the clock (well, until dark anyways) shark diving.  Catch ya later.