November 20, 2009 by DC Rainmaker|Central and South America, Mexico, and the Caribbean » Travel|Comments (7)

I woke up surprisingly late  – around 9AM.  Though, since we were just making the trek back to land, I wasn’t exactly missing much.  Thankfully, the weather continued to hold up and made for an incredibly calm ride back – the seas were pretty much like glass: 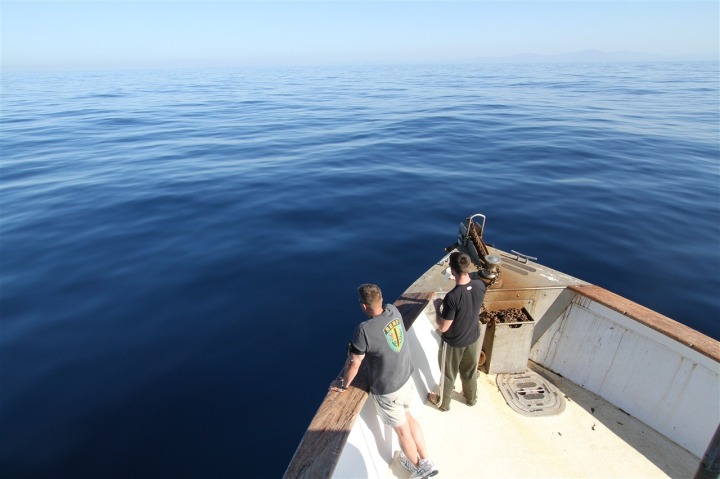 Given I had missed breakfast I started on doing the next best thing – packing.  our little cabin had become a solid mess of gear – be it bags, camera equipment, clothing or just general random crap. 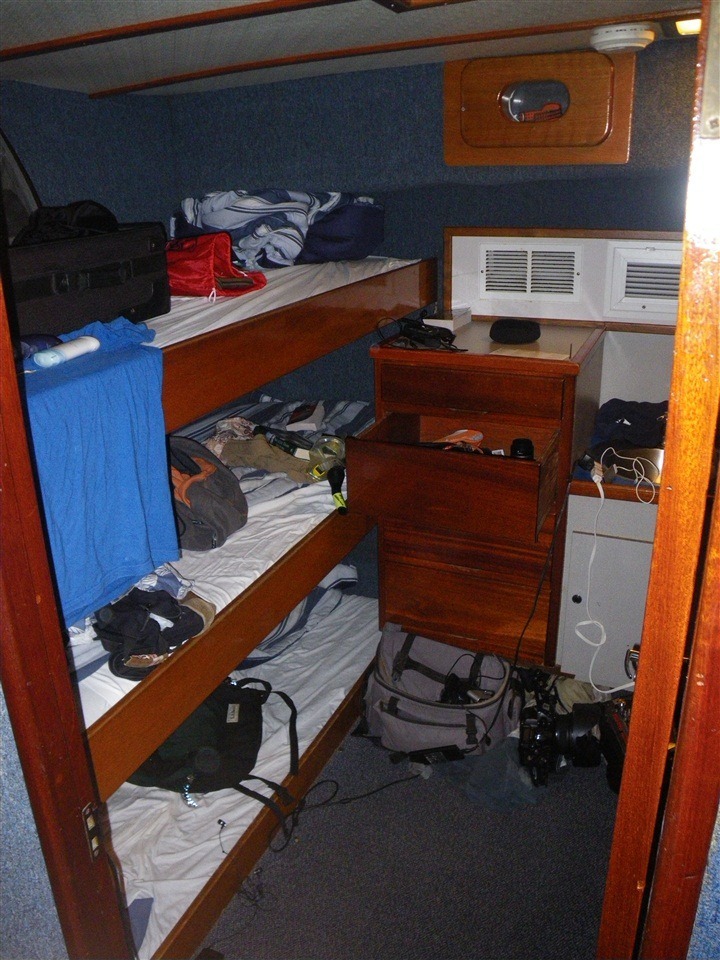 The good news is that everyone else was pretty much in the same mode.  Wandering about the boat trying to find all the odds and ends they had left about.  Be it wetsuits, camera stuff, or clothing. 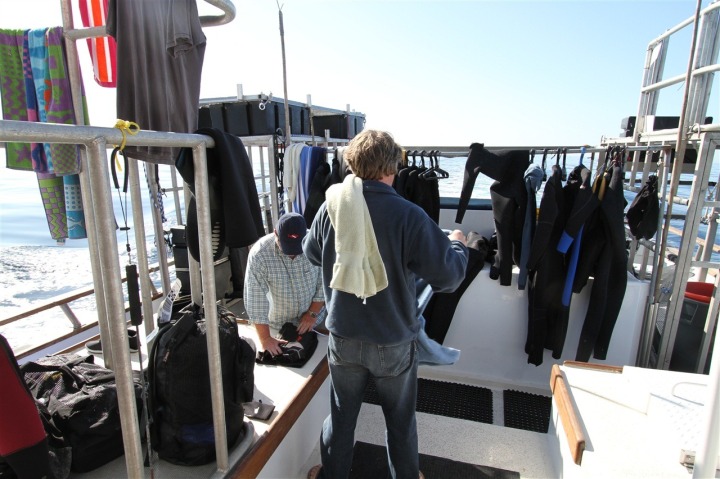 A short bit later land started to come into focus, though it would take a few more hours until we finally reached port. 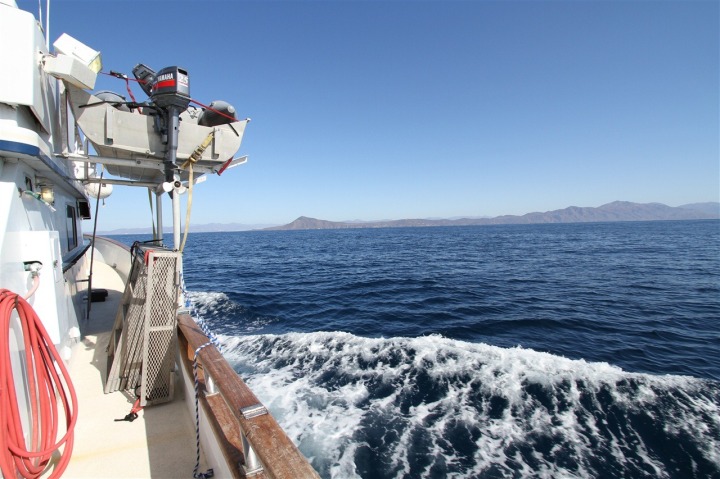 While I was snapping pictures I noticed my little Spot Tracker device hanging out on top of the stern, glad I noticed that – it would have been sad if it had just sat there for the rest of it’s little life beeping away.

Placement there meant the track during the trip was awesome – near prefect.  You can check out (and zoom in) to the whole track here. 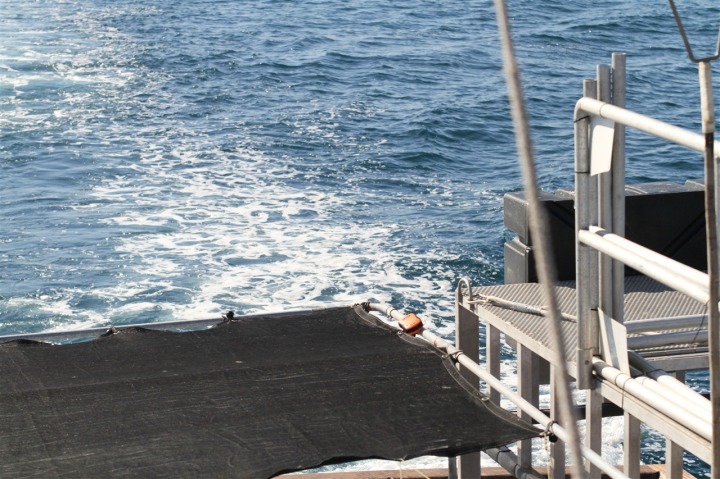 Before long we were pulling into the harbor.  The massive Mexican flag (no really, it’s hard to comprehend how big this thing is – it could be used as a tortilla wrapper and our boat could have been the filling) made it very clear which country we were about to land at. 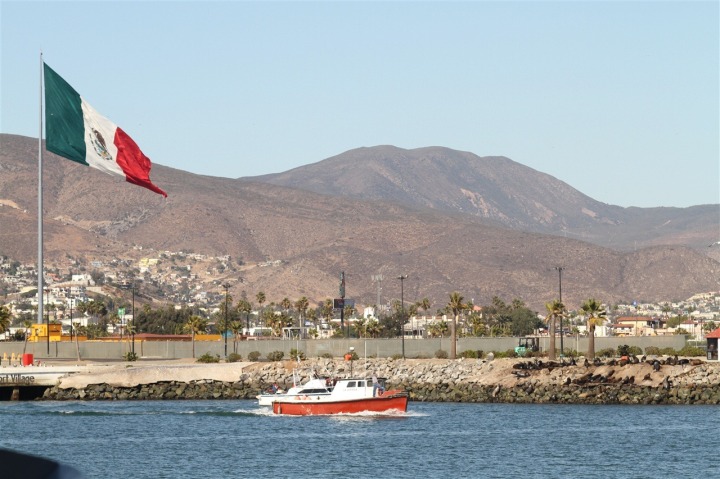 You might notice above on the rocks to the right a bunch of black blobs.  Turns out those were some sea lions.  We saw them on the way out as well, but I didn’t remember the congregation being as big as this time. 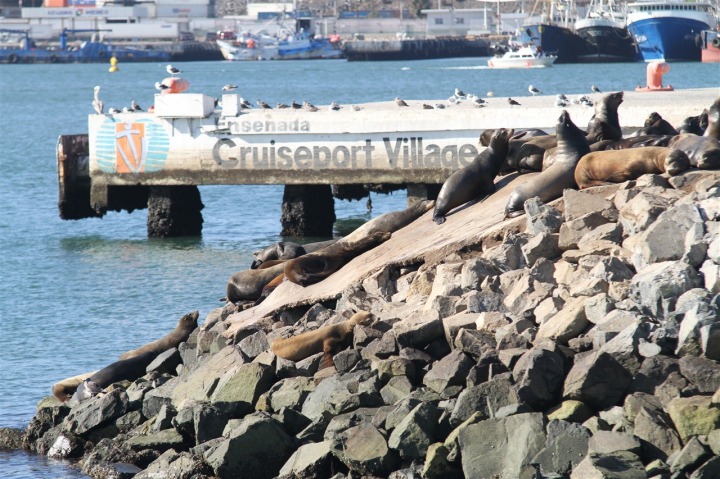 Soon we were in the final stretch, less than a few hundred feet from the docks.  You can see all the wetsuits had been taken down and everything was pretty well cleaned up. 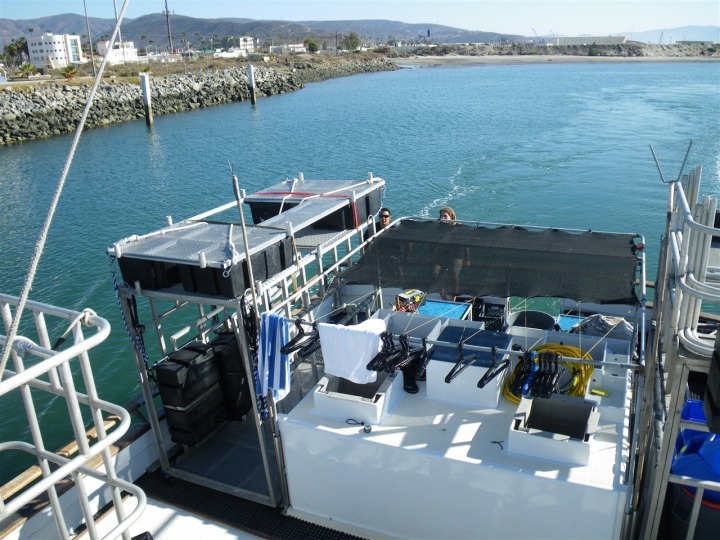 Oh – and in case you’re wondering – that towel I ‘borrowed’ from the Holiday Inn…it’s still alive.  Here it is getting ready to get the old plastic bag treatment for the ride back to the hotel (where I happily offloaded the stinky thing).  Kinda like a travelling gnome…only less glamorous. 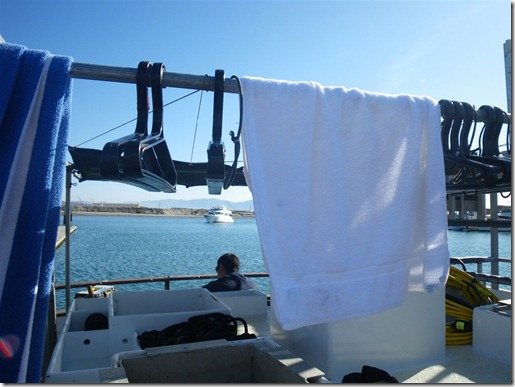 While the crew got the boat all tied up, that didn’t mean we were able to get off yet.  Nope, we had to wait for the customs officials to come on board and give us the green light to depart. 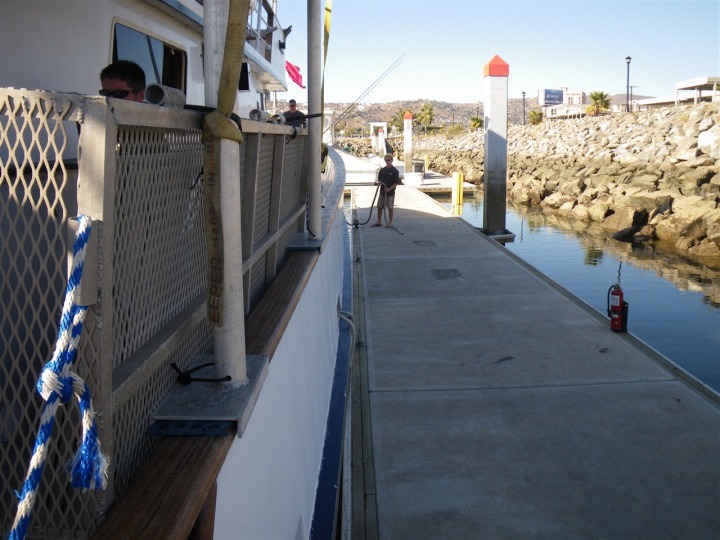 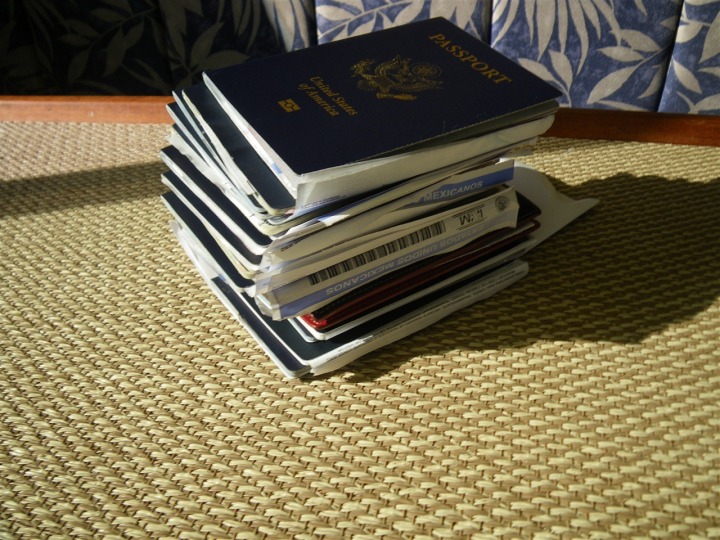 This time though things went much more smoothly and before we knew it we were dragging suitcases across the dock back to the bus waiting on shore.  Because the normal ratio of people to bags was greatly exceeded on this trip, most folks made a few extra trips back to the boat to pickup any extra bags.  Walking around on sure beat sitting on a warm bus in the sun. 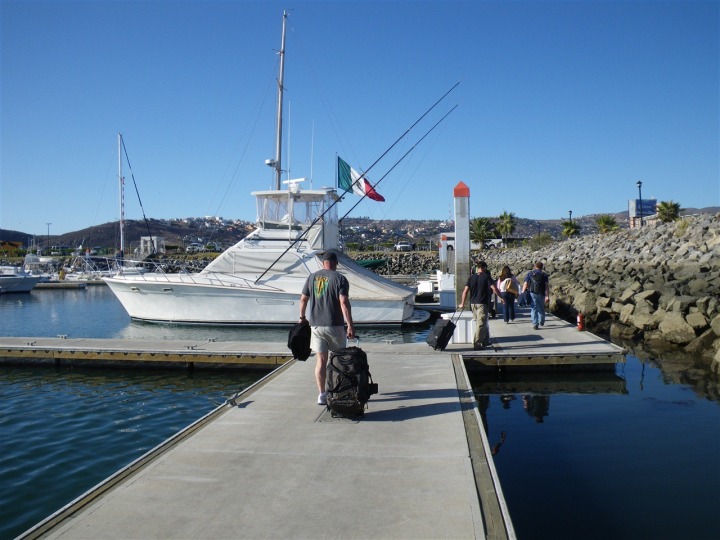 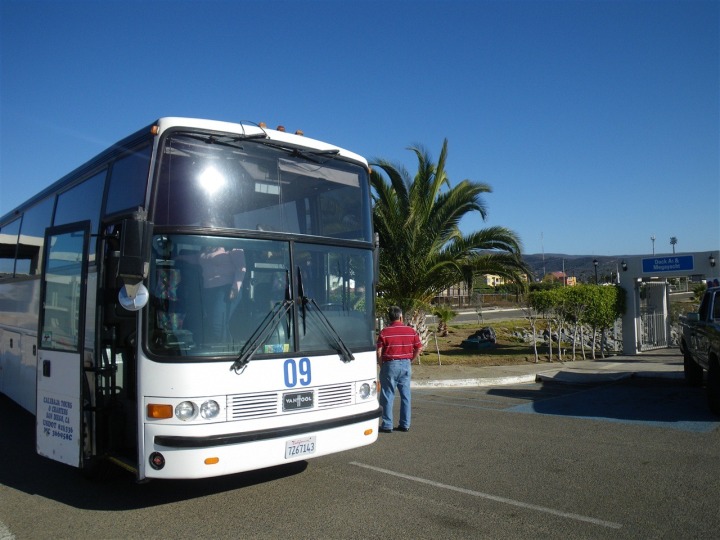 From there we departed out of the port and into the seaside town of Ensenada before making our way up the coast to the border.  It was a large charter bus, but with only about 20 folks, we all had plenty of room to spread about. 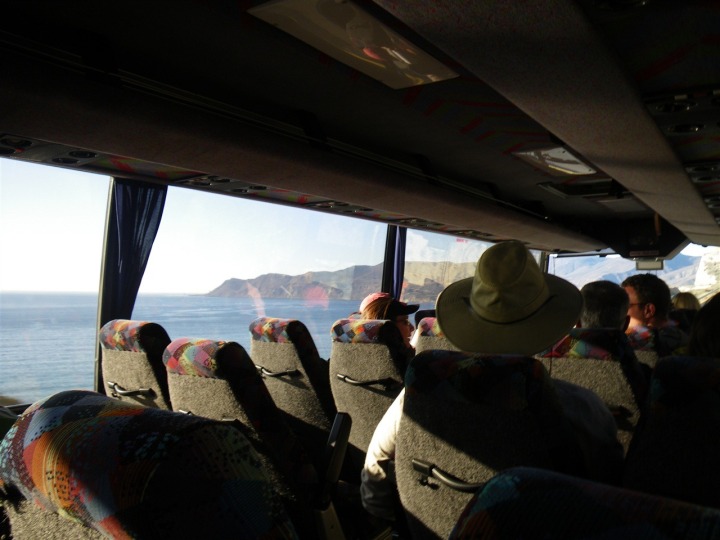 About 90 minutes later we arrived at the border and then after a quick two-step-tango across the border we were on our way to San Diego, finally arriving at the hotel around 6PM.

And with a quick and simple offloading – the trip was over. 🙁

Without a doubt the trip was well worth it and very cool.  The guys at Shark Diver  and host Luke Tipple do a great job at communication before the trip, and execution during the trip.  And the crew on The Islander was great – especially the cooking – amazing stuff. Normally the larger sharks (females) arrive around this time of year (fewer of them though), while the smaller but more plentiful males tend to congregate in the September timeframe.  I knew going into the trip that we might be low on sharks, but it still turned out as a great trip.  I think if I were to do it again, I’d probably choose the September timeframe – just to see more animals.  But, by the same token I got a pretty darn good deal on this timeslot because of the film crew onboard – so I’m not complaining!

Oh – as an interesting aside, I ended up logging 10 total ‘dives’ while on the trip, for a total of 10 hours.  Gotta figure out exactly how you log that in your dive bike, for depth I guess I put ‘6 feet’. 🙂  I also considered logging it into TrainingPeaks.com as swimming time… 😉

Since I know some folks were interested in all the camera stuff I had – here’s the rundown.  As I mentioned before departing, I was sorta caught in a weird position where the underwater case I was expecting didn’t get shipped in time.  So I had to change plans with about 24 hours to go, as a result I ended up taking a bit more gear just to ensure I had all my bases covered.  For the most part though, it really only ended up being one extra camera body.  If you do a trip like this you really want to have two cameras – one for underwater and one for on the boat.  You don’t want to be taking your UW one out of it’s case in-between dives.

Here’s the assortment of things I shot with (topside means on the boat, underwater means…underwater):

Lenses (all Canon unless otherwise specified):

I actually had strobes with me (Ikelite DS-51 and Sea & Sea YS-90DX) but didn’t end up using it the first or second day.  However, on the third day Simon helped setup the 5D with two strobes to try and even out some light issues.  Though in the end I didn’t get to really use them much since nothing showed up after the strobes were attached.  But I did get to experiment with little fish and get a better understanding of lighting for some trips I have planned over the next few months – so all was not lost.

I actually rented two lenses before I left from a local shop – Penn Camera – as I was in the market for them and was curious how they performed.  It’s a super-cheap way to take lenses specific to a trip with you without forking over a lot of money for them – especially since if you rent for a week they only charge you three days.  Plus you get a 50% credit towards the purchase of the lens.  Just today though I was reading a photography site of someone I know and he did a review of a bunch mail-order rental options that were a fair bit cheaper.  Plus, he has a 15% coupon/link on top of it.  So for some other trips I have upcoming I may consider doing that if I need a specific lens.  He’s also got a lot of other great info there too on reviews, etc…

One interesting photo tidbit I figured out during day 2 of diving is that while I was using burst mode to snap off a bunch of photos by simply holding the shutter (such as when a shark flies past), I was hitting the end of the buffer.  After reading the manual (just because I had some spare time, not trying to troubleshoot) I found that because I as shooting RAW+JPEG my buffer was significantly limited compared to shooting straight raw (6 pics vs 15 pics) – which is a huge difference.  I normally shoot RAW+JPEG (meaning for every picture I take I get one in RAW format and one in JPEG format) because most of my pics I don’t bother to touch up since I just resize and post here, so the extra steps of RAW only is a PITA (but I always still have it if I need it).  But for these pictures I needed speed over the convenience of both formats and of course still wanted the RAW.  Having 15 shots meant I rarely hit the end of the buffer, whereas with 6 shots it’s fairly easy.  So switching it over was key to getting some good sea lion shots the next day. 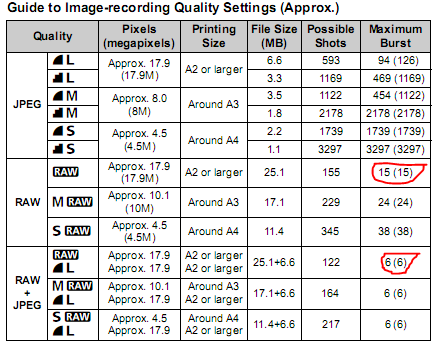 (Snippet from page 59 of the Canon 7D manual)

Anyway… if anyone has any questions on shooting underwater or the trip in general, feel free to post (or e-mail) and I’ll be happy to get them answered.  Here’s the roundup of posts btw:

Hope you found the series interesting – at this point I’ll now return you to your regularly scheduled posting of triathlon, running and whatever else floats into my brain.

(Please note: All photos and text are copyrighted by me – Ray Maker – if you want to use a photo, just ask and e-mail me. Unlike the sharks, I don’t bite.  Thanks!)