Recon Jet: Hands on with the endurance sports heads up display 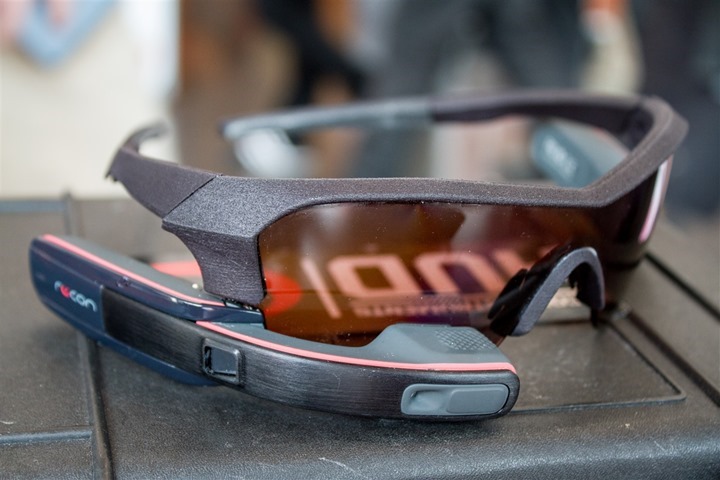 While the Recon Jet was introduced this past spring, it’s a project I’ve been following for quite a long time. I first sat down with the company over a year ago to talk about what athletes would want in a heads up display. Since then I’ve checked in with Recon from time to time to see how things have been going on the Jet.

Upon offering the product for sale in July things have been solidified on a number of technical fronts, so I got up to speed on those as well as what the plans are moving forward.

First up is the unit in whole. The Recon Jet is fully built in-house, which means it’s not actually going to attach to a different OEM’s sunglasses (like Oakley), such as how their snow products do today. The reasoning for this is relatively straight forward once you see how much custom design work must be done to make all the electronics fit into it. 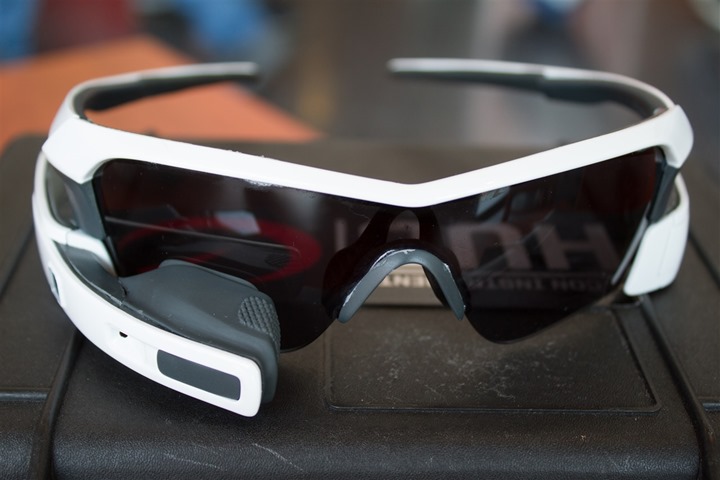 Before we get too far one should realize that the unit shown here is prototype, and has a lot of ‘rough edges’ from a plastics standpoint. It’s also not final yet, for example the black edition shown above is a slightly earlier prototype and you can see the display is a touch bit smaller than the next iteration (shown in white). So things will continue to be tweaked slightly.

The Recon Jet is essentially three components: The glasses, the battery pack, and the computing engine (display/sensors/etc…). The glasses specially are designed to be usable after removing the two pods for post-workout use. For example, you finish up your ride and want to use them for the drive home or to do snow angels in the sand at the beach. They’re still working on the edging below so it’ll be much cleaner in the next prototypes.

By default the package will come with a ‘smoke’ lens color (what you see in these photos), however, they’ll offer four types in total: Clear, Rose/Yellow/Orange (exact variant TBD), Smoke, and Mirror. 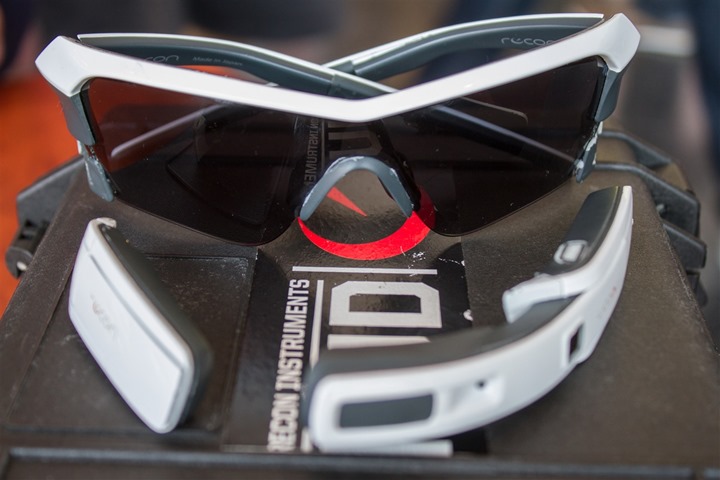 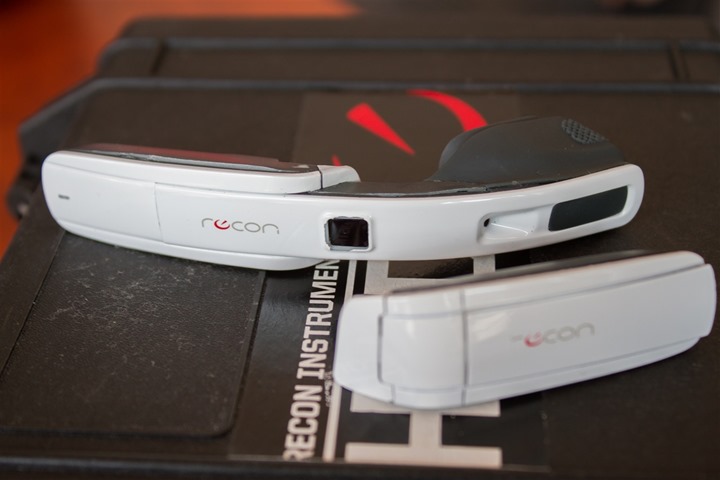 For a quick tour through the pods, first up we’ve got the battery pod. This pod weighs 14g, and the battery has a lifetime of 3-6 hours depending on which sensors and features are used. 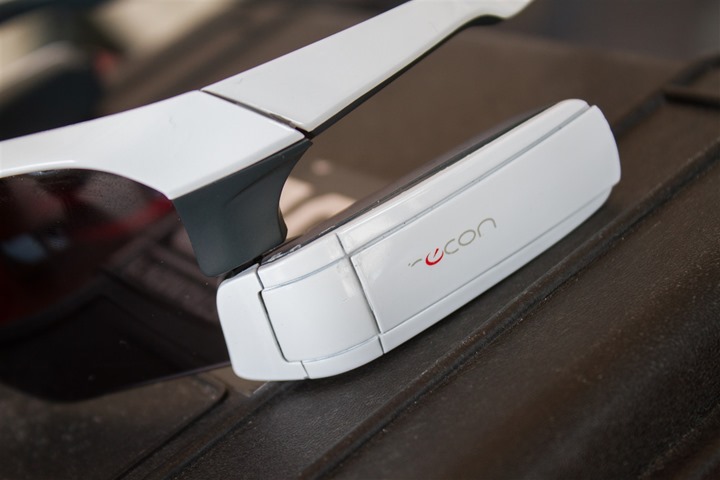 The battery pods are designed to be replaceable, and while a final price hasn’t been established for extra battery pods, they expect it to be in the $30-$50 range. 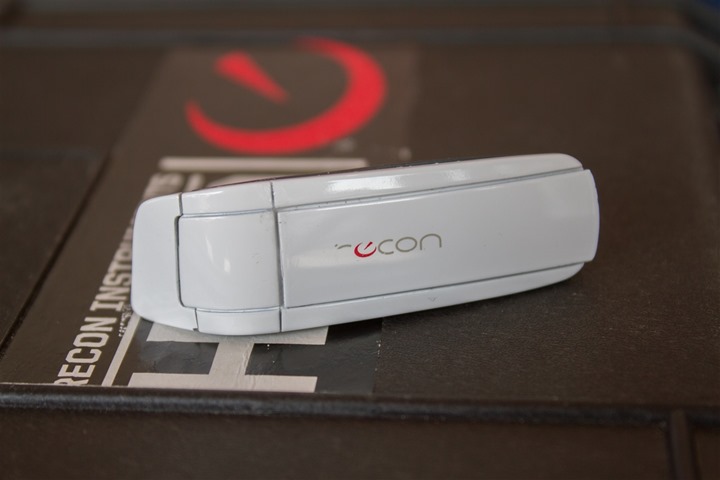 Next we have the ‘computing engine’ pod, which contains all of the real goodness. This is connected to the battery via tiny virtually invisible wiring along the top of the frame of the glasses.

The computing engine has a dual core 1ghz processor on it, and also weighs 14g. You’ll note that both ‘pods’ (battery and computing) weigh the same, to ensure balance in the universe.

In total, that puts the pods at 28g, or slightly less than 1oz. The glasses themselves weigh 32g. 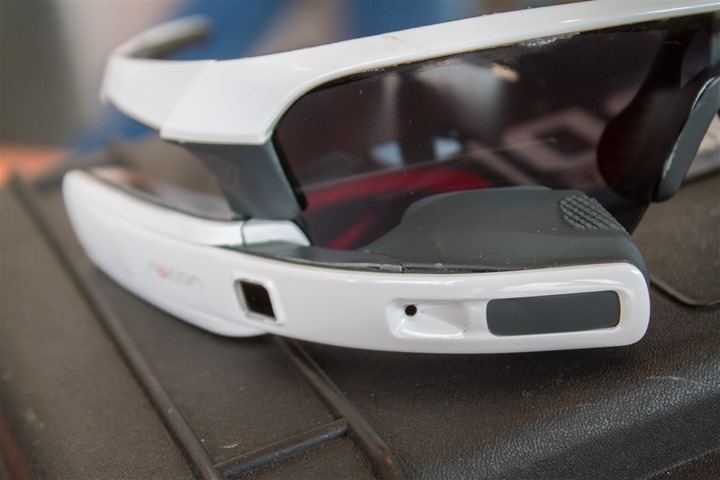 The computing engine runs Android Jelly Bean 4.1.1 as its kernel, though the Recon OS is what the glasses itself run. From an Android standpoint, developers can leverage an API to develop apps for Recon Jet in a similar manner as they’d develop apps for the remainder of the Android platform.

Inside this is where all the good stuff is, specifically the following sensors and components:

Below, you can see the little black square is where the touch sensor is, allowing tap and swipe movements. They said it works just fine with gloves or in the rain. To the right of the square you’ll see the small dot, that’s the camera. 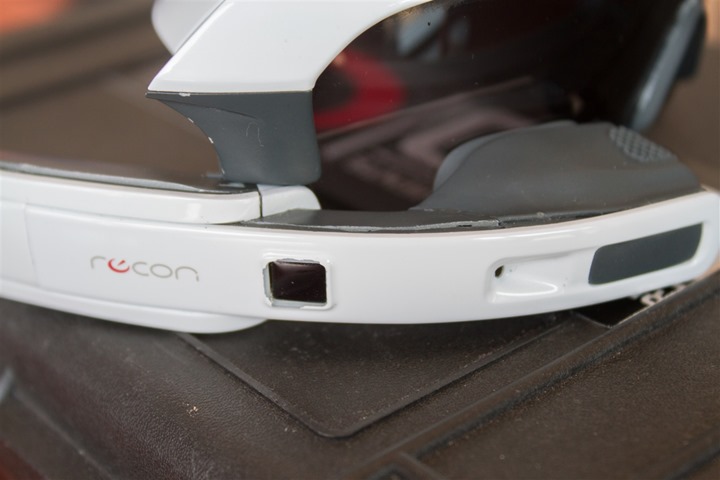 It was explained that the goal of the camera is “not intended to replace a GoPro”, but rather, aimed for quicker photos on the go. For example, if I was coming up on Yogi bear while riding – the ability to simply tap the button on the side and instantly get a photo. Or do a combined single tap with a secondary longer hold to start recording video. Think of it as situations you’d normally grab your cell phone for.

As noted above, the quality will be 720p initially, but down the line they may look at more advanced sensors as they become available/reasonable in that size. 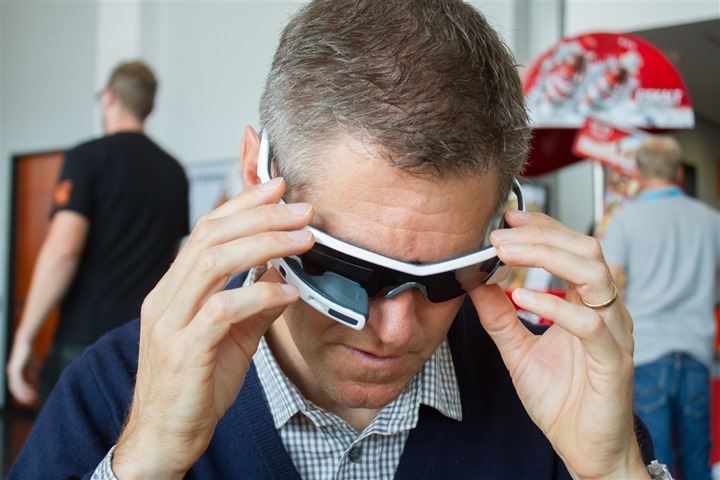 You’ll charge the battery pods using the Micro-USB connector on the computing engine side/pod, which in turn charges the battery pod itself on the other side. 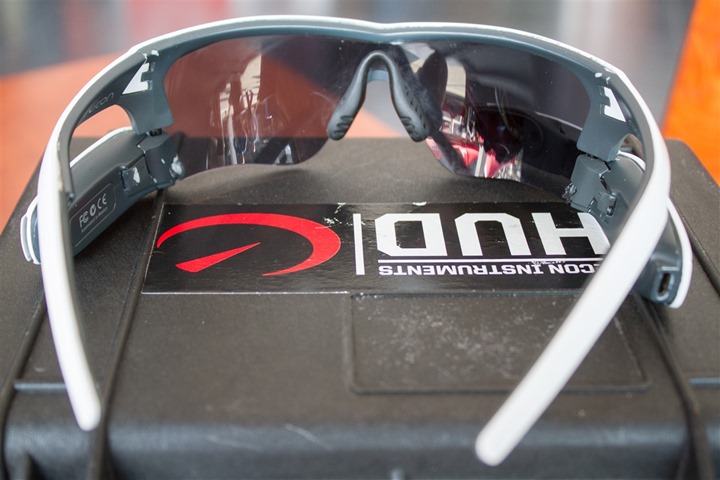 From a functionality standpoint of interest to most athletes are the ANT+ capabilities. The unit out of the gate will include support for ANT+ Power, ANT+ Speed, ANT+ Cadence, and ANT+ Heart Rate Sensors. Also, metrics from GPS such as distance and speed are also displayed. This means that as you ride you’ll be able to have your power information displayed inside the heads up display itself on the small screen.

The display is designed to be just inside your peripheral vision. In using the Recon HUD’s for snow sports, I found that when positioned ‘just right’ it works perfectly. However, when not positioned correctly you have to refocus. Unfortunately, this particular unit was not powered, thus I couldn’t get a good feel for how things stand today with the Jet. 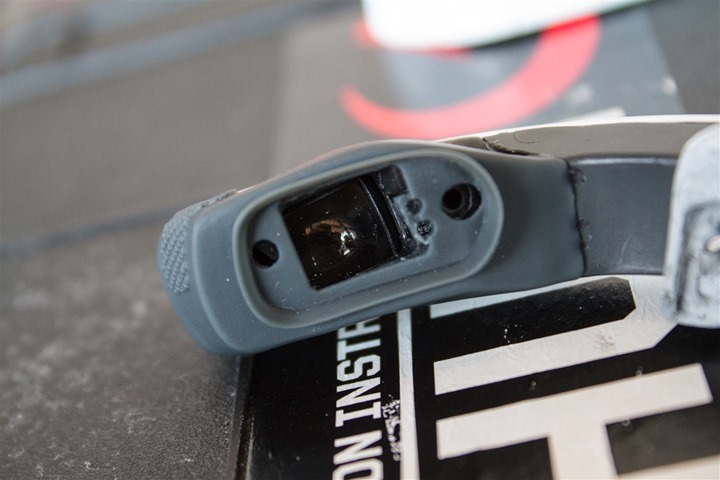 The unit is designed to connect to Android and iPhone apps, which allow you to take advantage of your cell phone. This includes out of the gate features such as buddy tracking where if two users are riding out at the same time you’ll get updates on his/her location (on a map on the display), as well as the ability to simply tap to talk to them via the cell phone connection (and in turn, via the speakerphone/microphone in the unit). Thus, the next time I can’t figure out where The Girl is on a ride where we’re out at the same time, I could just tap and it’ll connect me to her and get details on why she’s still standing by the side of the road.

Other features aside from replicating your GPS bike or running computer (which it does) is notification of incoming texts and calls and weather. Additionally, you can configure the unit to spit out updates to social media platforms. For example when you cross 100 miles on a ride, it could automatically post that information to Facebook exactly as it happens. 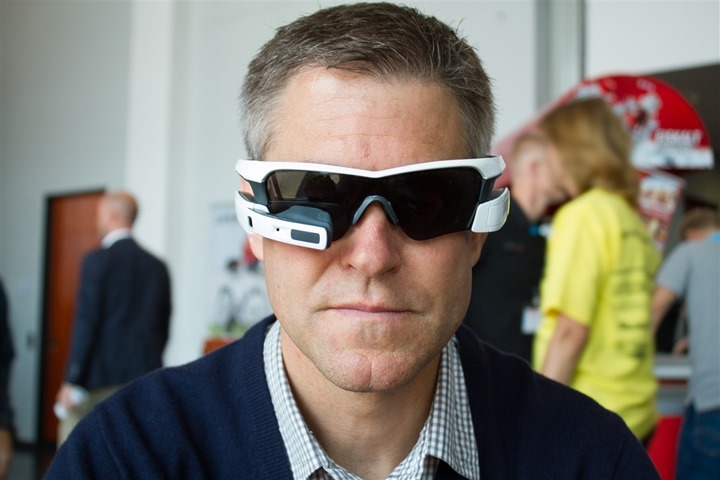 There’s significant potential for integration with other 3rd party services to develop apps as well, from Strava to Training Peaks – though none have released their exact plans yet.

Currently the unit is selling for $599, with European pricing still being finalized, though they are targeting 649€. Availability at this point is split into two groups. For the absolute earliest folks who pre-ordered in July, they will receive theirs in December. For everyone else, it’ll be just into the new year (2014).

Going forward, they’ll be doing their B3 prototype device run (build) right before Ironman Hawaii (Kona) and will be present there to demonstrate the units further.

I’ll be likely meeting up with them at the ANT+ Symposium the week prior, and hope to be able to give a more “in-use” first-look at it then in person. After all, there’s no better place to go for a ride, see some bears, and capture it on camera. 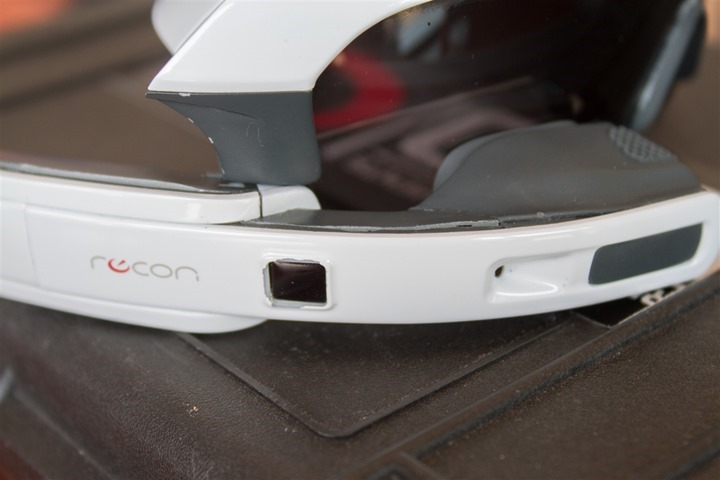 Finally, in addition to all of the work being on the Recon Jet, they’ve also got some news on their snow sports variant – the Recon Snow2. This unit updates previous ones (which I’ve toyed with in the past) by adding in WiFi, extending the battery closer to 8 hours, as well as adding in all the social notification features I mentioned above. The OS GUI looks quite a bit different and cleaned up as well. If you have a previous unit you can buy the new unit without re-purchasing the entire goggle, though, it’ll still cost ya – $399 for the total swap of internal parts (449€). 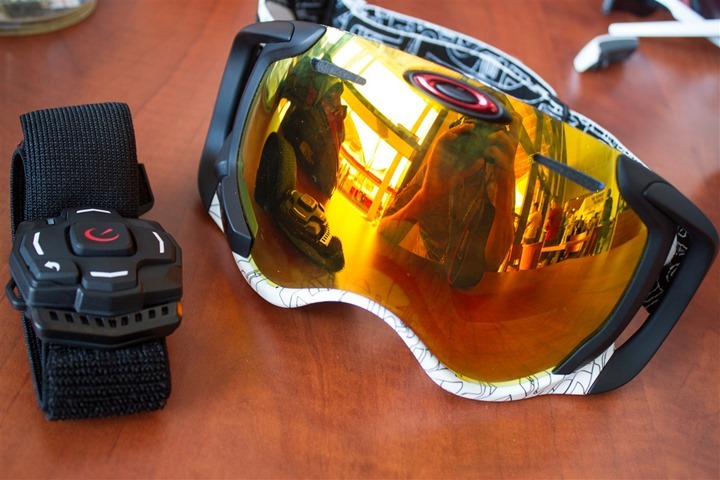 Update/Heads Up: You can order Recon Jet through Clever Training and support the site here.  By doing so you’ll save 10% with DCR coupon code DCR10BTF, plus get free shipping within the US (and flat-rate international shipping).  Simple as t