Over the past few days I got a chance to check out all the new units that O-Synce is working on for the next few months.

First out of the gate is the upcoming release of a new Bluetooth Smart remote control. This is physically identical to the ANT+ remote control (pictured in a few photos), but with Bluetooth Smart guts. The goal of this is then to be able to use it to control your phone that may be strapped to your bike – from your handlebars.

The reason this would be valuable is for folks that don’t want to take their hands off the bars (such as mountain bikers) – or, if you’ve got a Bluetooth Smart display (more on that in a second) and want to be able to control it.

The remote control is pictured to the far left, and is normally wireless. This development unit shown was wired for updating firmware during development – but the actual communication is happening wirelessly to the iPhone at right. Normally you’d obviously not have both a bike computer display and an iPhone on the handlebars at once – this was just to demonstrate things easily. 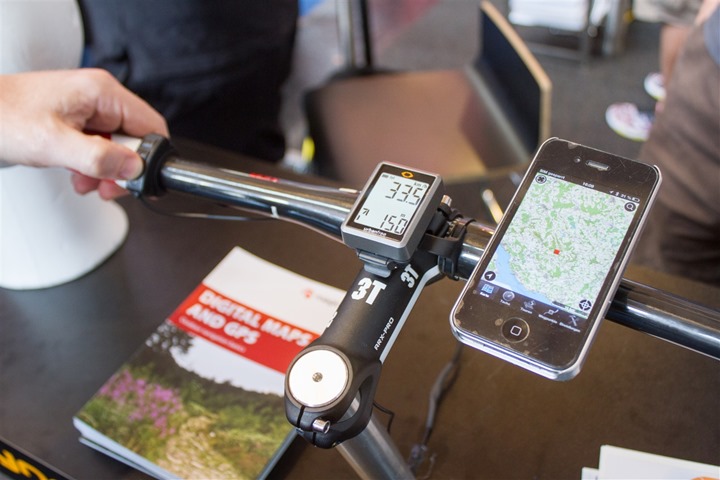 The Bluetooth Smart remote control usually looks like the below (ANT+ edition shown), which is interestingly using ANT+ on one of the Sony ANT+ enabled Xperia phones to control music. A use case here could be controlling music or other fitness apps via ANT+ on your phone. 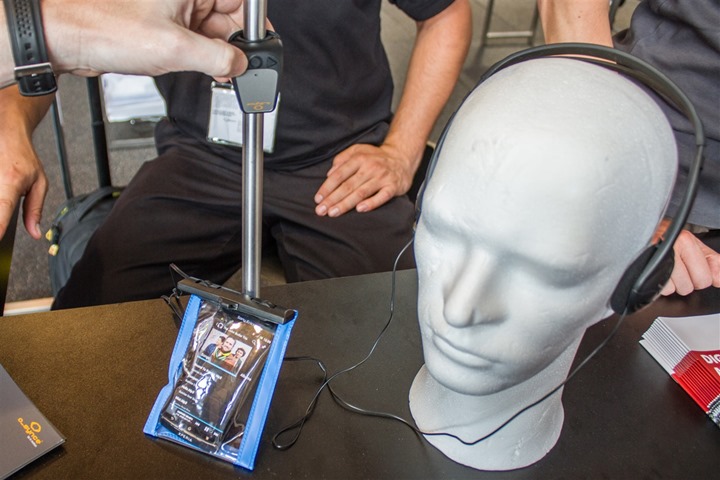 Next up we’ve got a planned Bluetooth Smart display from O-Synce. It’ll be using the same physical casing as the UrbanFree you see below today but controlled via Bluetooth Smart. 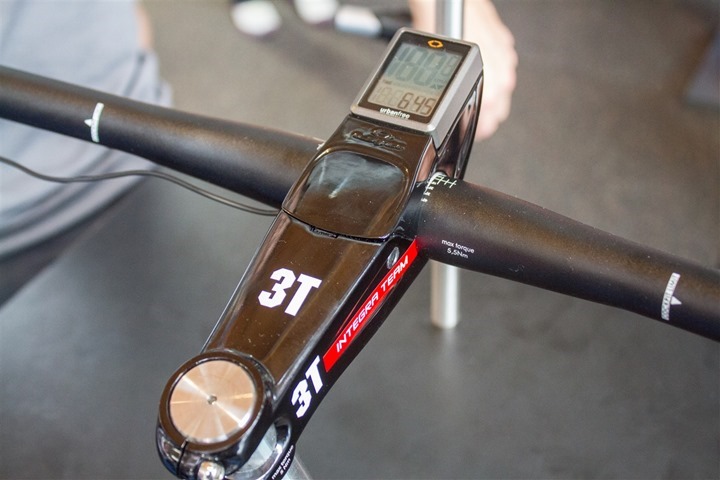 This will ultimately make it a competitor to the RFLKT unit out from Wahoo Fitness. Being a Bluetooth Smart head unit, it won’t be collecting data itself, but rather displaying data from supported phone apps. Further, the unit at present doesn’t have buttons on it – instead using the Bluetooth Smart remote you see above. The current plan is to price it at 99€, with timelines a number of months down the road. 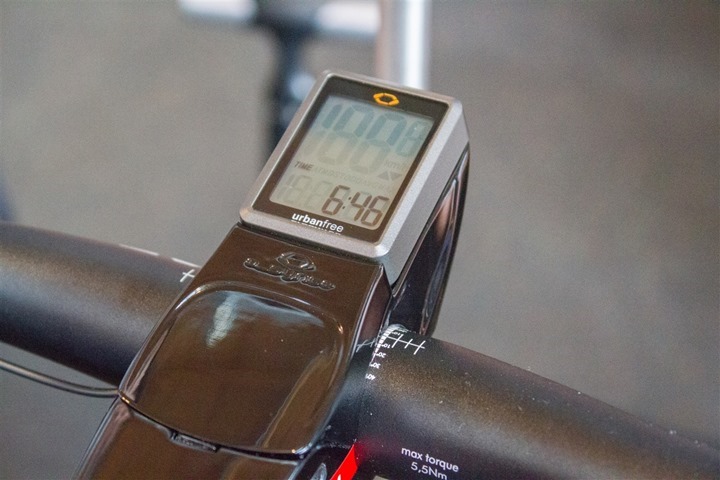 In this mock-up, the phone would then normally be in your pocket, while the bike computer is displaying metrics from the phone (such as speed/distance/etc…). 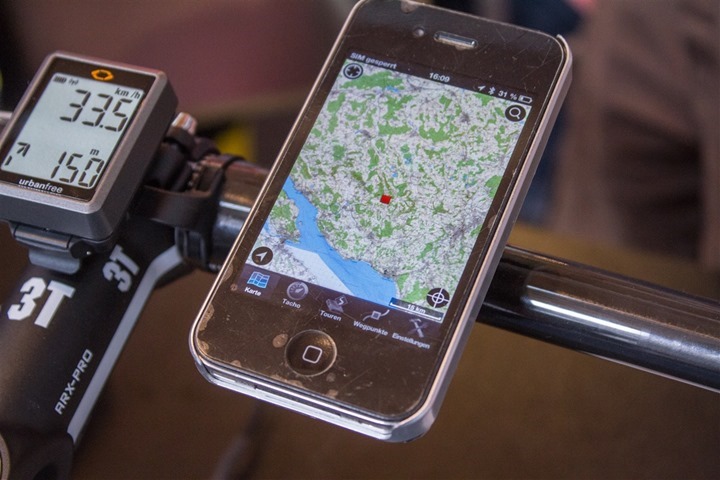 O-Synce has been also plugging away at software improvements to their Navi2Coach unit that I reviewed a few months ago – adding feature after feature every few weeks. Especially for power meter users. It’s pretty impressive to see them continue to listen to user requests and feedback and issue updates accordingly.

In addition to physical improvements and additions, they’ve worked to update their Training Lab software. The software itself has been split apart from O-Synce as a company now (to TrainingPlans.com) and will ultimately have two versions (free and paid). The details of that are still being worked out. 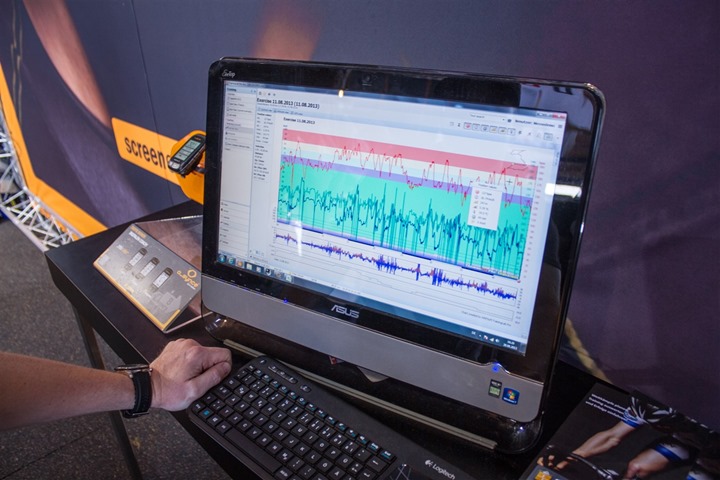 In the meantime, they’ve added the capability to the software in conjunction with the O-Synce Navi2Coach (that’s the head unit) to see calibration events from power meters. This feature records any of the calibration events sent from the power meter to the head unit, and then enumerates them on the screen in the training file. The below is from a beta build, but expect it to come out publically shortly. 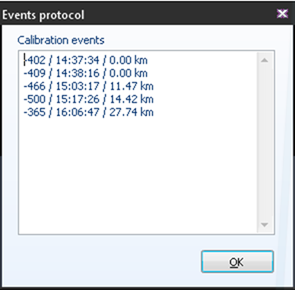 The second scenario is the Auto Zero offset value that’s reported. Only SRM and Quarq (in German compatibility mode only) Auto Zero offset values are recorded today – simply because they are the only ones who actually send that information out. O-Synce has been working with other power meter companies to get this functionality added to their meters. For some (like the PowerTap), a firmware update would be relatively easy since the G3/GS caps can be easily updated by a user. For other companies that don’t permit end-user firmware upgrades, that’d be a longer cycle.

I think that the recording and displaying of calibration values and offsets is incredibly important to ‘raising the standard’ of power meter analysis today in the sport. By having these values recorded, it allows software and humans doing analysis to raise red flags when such values aren’t recorded at all.

For example, if a coach were analyzing a power file from an athlete and noticed no initial calibration values nor any auto-zeros along the way, and yet noticed the power values were significantly above or below the norm for that athlete, the coach could more reasonably question the data at hand. As well as question if the athlete knew how to use a power meter.

Widely used software applications like Strava, Training Peaks and Garmin Connect could also consider adding a simple drop-down warning message (like when a pop-up is blocked on your browser) that reminds the user that no calibration was detected for a given ride, and that they should do calibration before the ride next time for the most accurate results. The simple reality is that very few users today understand calibration and/or offsets and the importance of it.

Finally, while they’ve made a ton of other software changes, they have also added an export function to Excel. As part of that I can export any file (from Polar to Garmin device FIT files) out from the software to Excel pretty quickly – similar to what Golden Cheetah can do. You’ll notice below the power metrics for left/right as well as the power calibration value included in that export.

Last but not least, I wanted to briefly call out that the O-Synce team has already started discussions with Garmin around enabling their O-Synce ANT+ remote control to control the Garmin VIRB and VIRB Elite action cameras via ANT+. Since both of these devices use the same ANT+ Remote standard this is a really good example of companies working together – even if the amount of work being done ‘together’ is as simple as following the specs of an open platform.