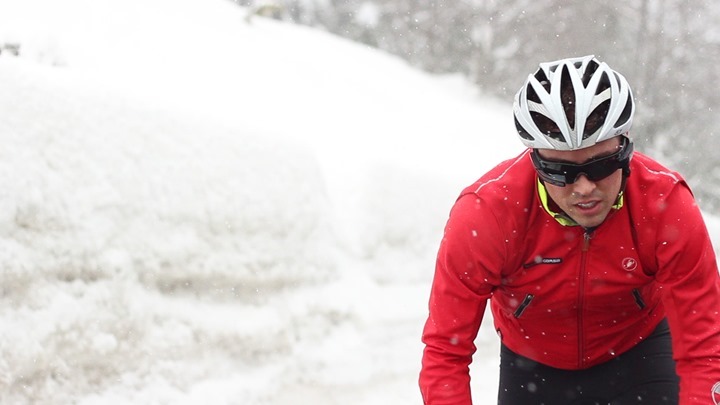 Today Recon Instruments gave a small sneak peek  of their upcoming heads up display unit aimed at cycling.  And by ‘small sneak peek’, I mean a single image, with a handful of text.  Perhaps ‘very small sneak peak’ was more appropriate. But, it’s potentially significant depending on how the ultimate execution of the device goes.

A Bit of Company History

As you may remember from two weeks ago, Recon Instruments has products within the skiing/snowboarding segment.  Their current products provide an actual display within the frame of the goggles that runs Android and display information to the skier about their current ski outing (note: They connect to both Android and iPhones, but the unit itself is running Android).   You can see the small display behind the red Recon logo at the edge of my goggles. 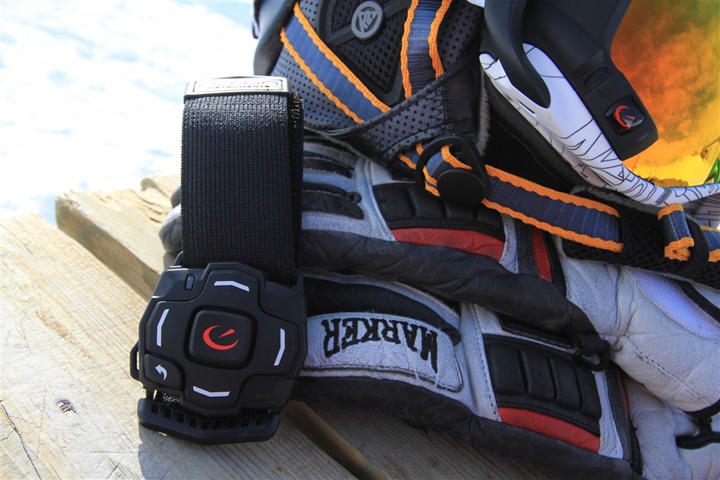 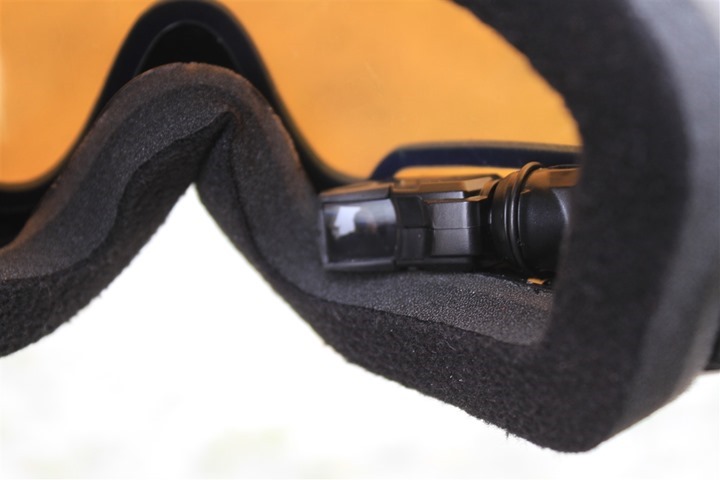 Within that small screen, you’ll get metrics related to speed/distance/descent/etc… Essentially, the same type of information you’d see while running with a GPS watch, you’re getting from the heads up display for skiing.  Depending on which model you have, I’ve found that I can get the heads up screen placed in such a way that it literally looks like the content is projected in front of me with no obstruction.  But other models have less ‘play’, and thus less of a HUD effect. 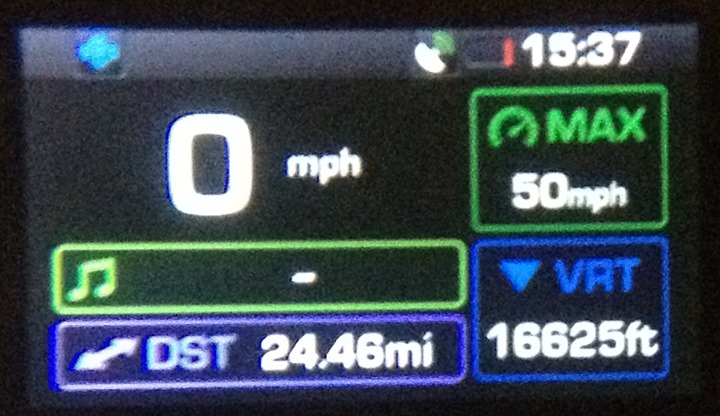 (Taking photos of the display thingy is really tough to do given it’s the size of your pinky tip…actual clarity looks great in real life).

They have a few models of ski goggles, mostly tied to specific goggle brands.  I’ve tested a couple different brands, but have been trying out the Oakley variation recently.  I’m still looking to do some variation of a review of them – just haven’t figured out if I’ll manage to squeak in one more ski weekend or not this year.  In doing so, I’ll probably provide you with a pretty good base for what to expect in the cycling-focused glasses.

So what do I expect to see on the cycling variation?  Well, for one I think we’ll see metrics related to cycling.  When I’ve talked to them in the past about areas I’d like to see covered, I noted that following as a minimum bar they’d need to have all of the same data metrics I’d find on an Edge 500 (including GPS).  I think that’s the minimum baseline.  In my mind I see this as a replacement device over a Garmin/similar.  I don’t see it as a secondary device.  Simply due to the likely costs – people aren’t going to buy both.

Second, it’s gotta have solid smartphone integration.  It can’t be a ‘me too’ app that companies want to release these days.  I don’t see that being an issue though on the Recon side because they already have app connectivity today, and as one of those features they offer a buddy tracking function for tracking other friends on the ski hill.  I’d like to see that expanded to allowing folks on the internet track your current location and other metrics in real-time.  Given the addition of that to the Edge 510 and Edge 810 – again, this product has to have that.  Otherwise it fails test #1 above (have what an Edge 500 has).

Third, I’d expect to see both ANT+ and Bluetooth Smart support.  Today on their skiing units they actually already have support for Polar HR straps, as you can see below.  But performance cycling is a market dominated by ANT+ today, followed up by products from Polar, and then in a far-distance last place, products on Bluetooth Smart. 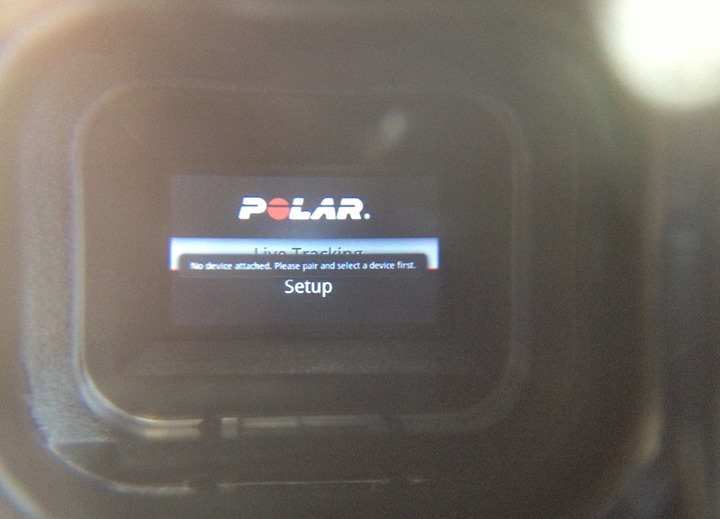 Now Bluetooth Smart is actually the easy duck.  That’s because the current recon units already have Bluetooth 4.0 in them and already utilize Bluetooth Smart to connect to smartphone devices that support Bluetooth 4.0.  The catch though being that since the unit is already using that channel to talk to the cell phone in slave-mode, it’d have to likely route the data back through the phone to the glasses.  Which, may impact battery life on both.

But honestly, I see ANT+ as a far more important connectivity point than Bluetooth Smart accessories.  As I noted above, cycling is dominated by ANT+.  And in particular, the market segment that would pay for something like this are cyclists that are likely already using ANT+ technology in costly power meters, or other ANT+ accessories in use with GPS computers today (such as speed/cadence sensors or heart rate straps).  Translated: They’re looking at a high-end market, not a low-end market.  And the high-end market is mostly using ANT+. 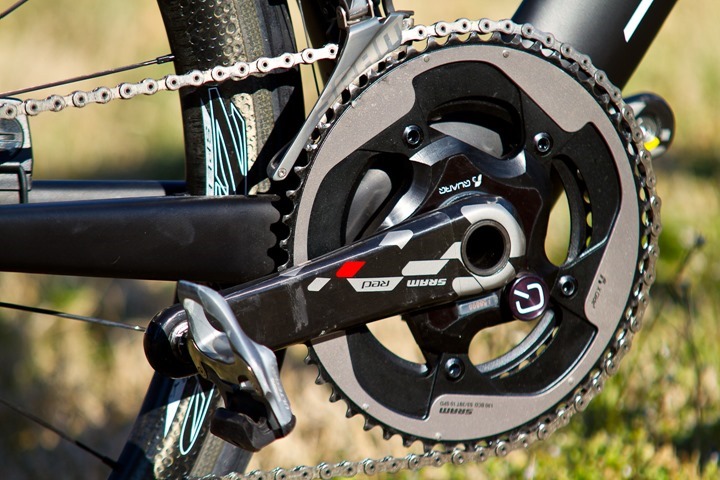 Next, battery life will likely pose a challenge.  Today, even on the much larger Recon skiing variant, battery life is less than ideal.  I was getting 4.5 to 5 hours on a charge – causing me to have to break out a USB charging block during lunch to try and get me to the end of the day.  In my opinion, you’re going to have to cover a 6-7 hour battery life nonstop (enough to cover middle of pack Ironman athletes).  Now, the warmer weather that most cyclists ride in will help battery life (compared to the cooler weather that skiers face). 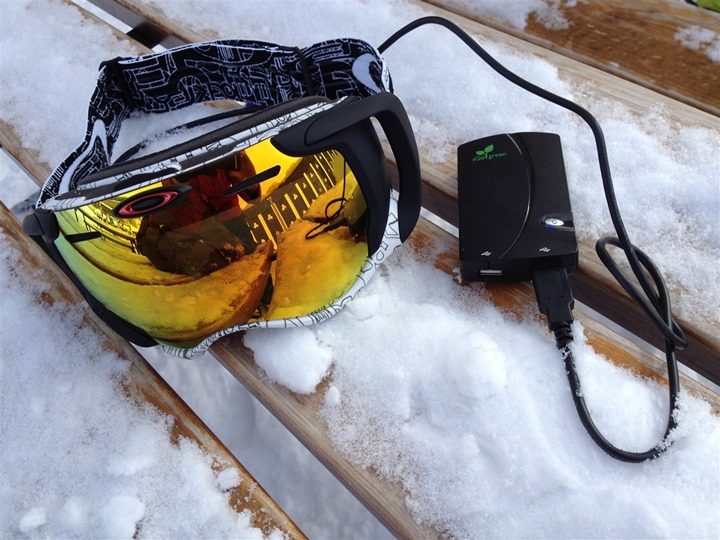 In addition to battery, they will also have to find a way to control the unit that doesn’t involve taking ones hands off the handlebar and up to the users face.  Today, they use a small wrist-band that works pretty well skiing.  But for cycling, it’s one thing to keep your hands on your handlebar and touch a cycling computer a few inches away.  But it’s an entirely different thing to bring your hands up and tap or otherwise interact with something on your face out of view. 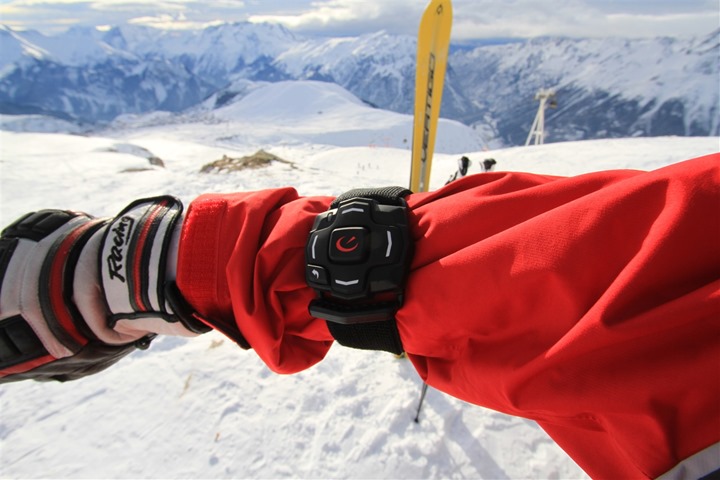 Perhaps something like the O-Synce remote ANT+ lap button is a best bet? 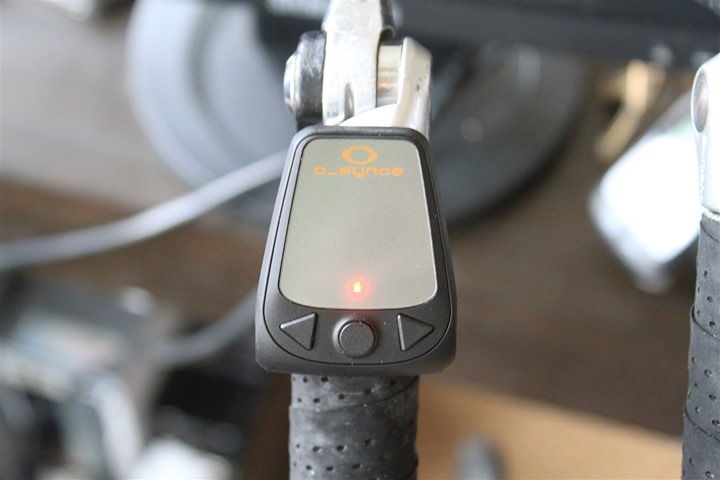 Many may wonder how this jives against some like the 4iiii’s Heads Up Display.  The core difference is the 4iiii’s unit display a series of LED lights on a bar, whereas this displays an actual small screen with live information.  And from a price-point standpoint, the 4iiii’s unit is sub-$200, and doesn’t include the glasses themselves.  The 4iiii’s with it’s ANT+ connectivity is best at keeping you in zone (be it power/speed/HR/cadence), but lacks the ability to provide you more detailed ride status (such as ‘where are you’). 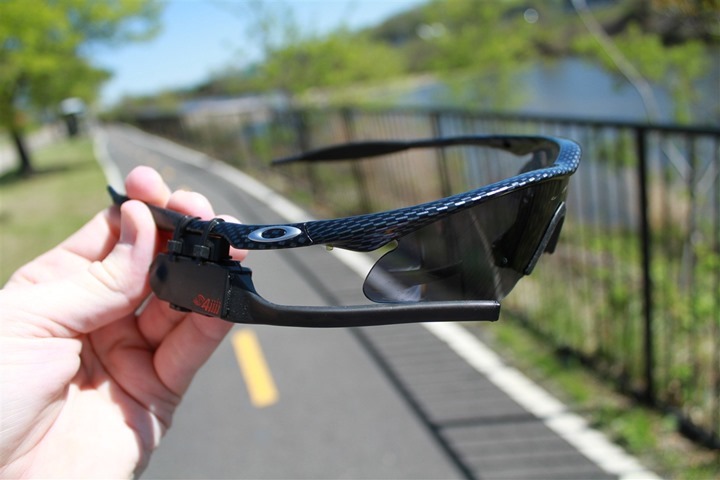 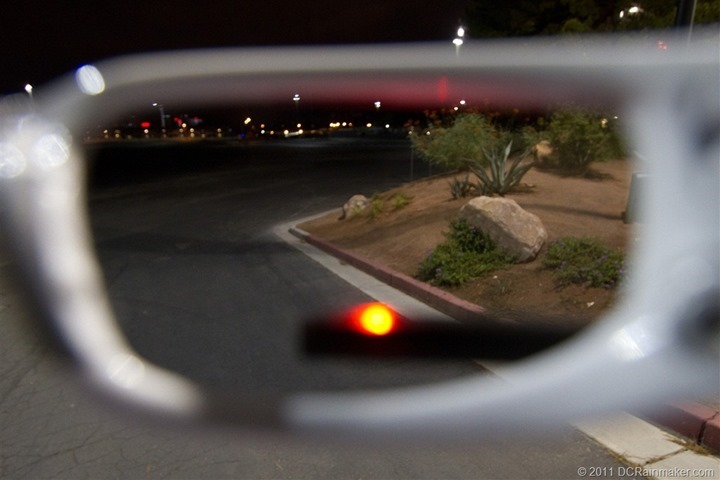 Lastly, what happens in relation to Google Glass that’s on the eventual train tracks?  Well, we know roughly as much about Google Glass as we do about the Recon offering.  We have lots of publicity/marketing items on the Google Glass, but as you often see in my reviews, the devils are in the details.  In the case of Google Glass, we’re still talking a pretty significant price tag (over $1,000US).  Recon remains unknown at this point, but I’d guess for the mid $400-600 range given that it looks like you’ll be buying the sunglasses with the HUD molded into the unit as well.  Thus the sunglass would be a component of that price from a cost standpoint.

Now, they haven’t said much, other than the below statement:

“Information should be easily and instantly available when you want it and out-of-sight when you don’t.  We have always made it clear that Recon intends to bring this technology to sunglasses for both professional and recreational athletes, and the public will get a first look at this sunglasses solution this summer.”

And, technically, they didn’t even imply that it’s a cycling-only device.  It could also tackle running.  Though, I’d guess that swimming is out for this iteration.

In the meantime, stay tuned, hopefully I’ll get to poke at one before we hit summer.

Update/Heads Up: You can order Recon Jet through Clever Training and support the site here.  By doing so you’ll save 10% with DCR coupon code DCR10BTF, plus get free shipping within the US (and flat-rate international shipping).  Simple as that!