The State of My State: 2010 Review Edition

Administrative Note #1: Thanks for the incredible response yesterday in the ‘What do you want in a sport watch?’ post.  It’s coming up on nearly 100 comments.  But not just quick comments – these are incredibly detailed and well thought through comments – amazing stuff!  I’ve received notes from folks in the industry that say “We are reading it –  every post, sentence, and word!” – so you’re voice is most certainly being heard!  I hope to consolidate much of the feedback in the next week or so and identify some trends – so keep it coming!

Administrative Note #2: The fact that the State of the Union was this past night clearly goes to prove that my blog is becoming so popular that even the President is copying my post titles (no, the fact that I’m publishing it after his speech doesn’t mean he didn’t secretly copy my draft post).  Nuff said!

The majority of athletes in the blog world complete their 2010 recap’s at some point either in late 2010 (last week or so of December), or shortly after the new year.  I on the other hand…have been slackin’.

The past year was focused on short distance triathlon – with nothing longer than an Olympic Distance race.  This was for two reasons. First, I needed a year of ‘less Ironman’ after 2009 having two Ironman races and some marathons.  And secondly – I knew my work travel would be increased. Given the amount of international travel that was on the radar, it would simply not be possible to effectively train for a competitive Ironman time.

So, let’s start at the beginning of the year.  And I because I want to slowly work my way to my ‘A’ races, I start off with some less critical stuff.

There’s only one word for this: Cold.

My first ‘competition’ of sorts was the Polar Bear Plunge.  You know…It’s the same one I’ll be doing again this weekend…the same one I’m raising money for!  And there’s still time, you can donate to help out the Special Olympics here! 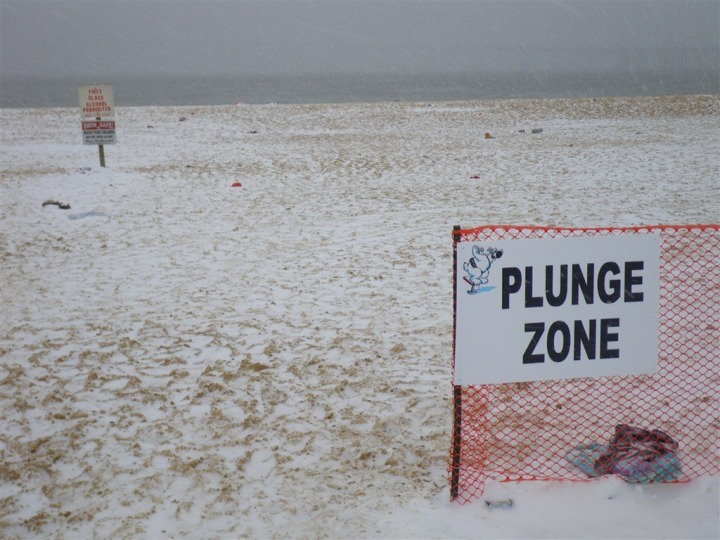 Suffice to say, we had a blast!  If you haven’t viewed the video in that post – it’s one of my all-time favs!

Oh, and before I move on…did I mention you can help support the Special Olympics here…you know – competing athletes – just like us!

The second month of the year didn’t have a race per se, but it was technically still a running event.

The Washington DC Cupids Undies Run – benefiting a good cause.  And while all the photos here are normally of me, I figured I’d spice things up a bit and give you a photo of Rob instead, since we ran it together.  Here he is pondering something profound in front of the Supreme Court. 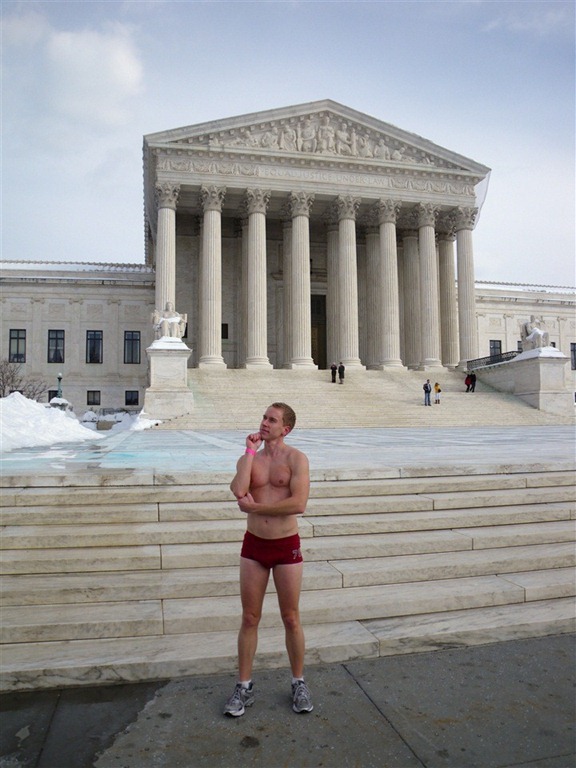 Happy ladies?  Good deal.  You can check out the rest of the pics here.

With some solid winter training under my belt, I hit up my first legit race of the year.  Like most in the triathlon community, this time of year it’s still running race time.  So I started with the St. Patrick’s Day 8K running around Washington DC. 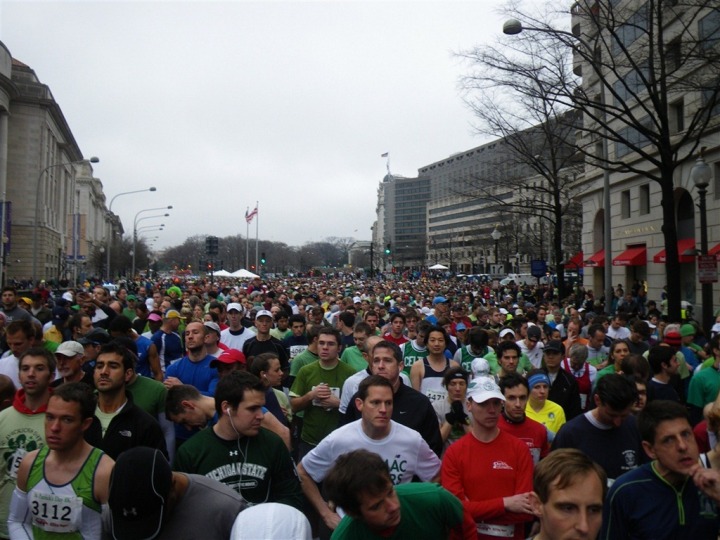 I was pretty happy with this initial season opener.  I clocked in a sub-30 time which gave me an average split of 5:59/mile – my first race going sub-6!

I then followed that up a week later with an indoor triathlon race out in Seattle – the Rainman Indoor Triathlon. 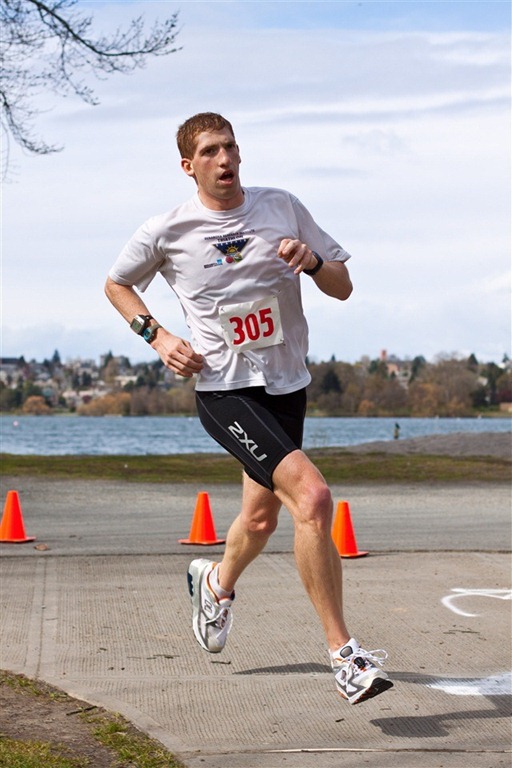 Off to a good start!

April brought my first fully outdoor triathlon of the season.  It also brought the one race of the year with the best name – the Rumpass in Bumpass.  Pretty awesome really. 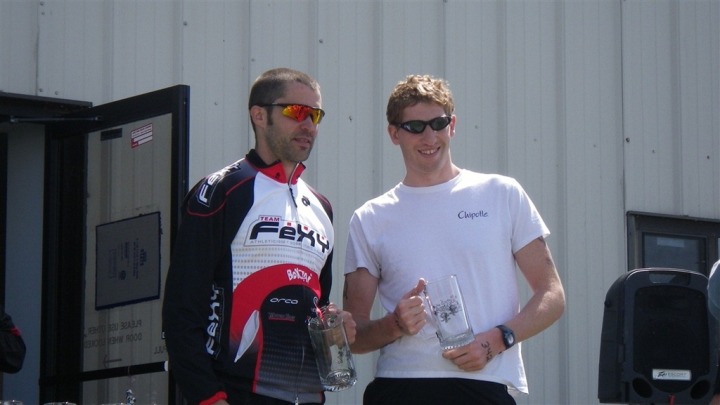 While the kinks were still getting worked out in my race execution, I was happy with a 2nd place AG finish, and a Top 20 overall.  Plus, who could forget the epic RV adventures?

And this is where things all went a bit downhill.  I was signed up for my first ‘Elite AG’ race – the Rev3 Knoxville Olympic Distance Triathlon.  I came out of the water with a pretty good time for me – I’m not the fastest swimmer – but this was a solid PR, and thus I was happy with that position.  From there I was making progress on the bike during that leg, just ticking away folks as best I could.

And then…well…then this happened mid-race a few miles from finishing up the bike portion: 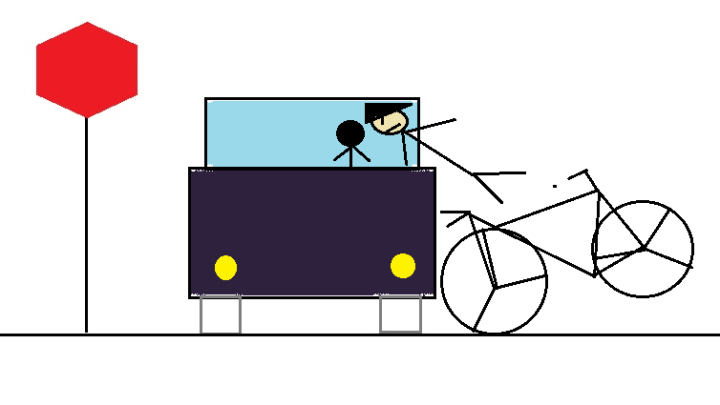 Aside from the dent in his car and my bike, this would ultimately put a bigger dent in my training.  Though, I did get a new bike out of it.

After weeks of back and forth the doctors found that I had fractured my femoral condyle (femur).  Go figure!  That led to reduced running and thus, reduced performances.

After weeks of little to no running, I had a race scheduled in late June – the Tidewater Olympic Distance Triathlon.  While certainly not ideal from a race timing standpoint, the course being flat offered an opportunity to try my hand at a few new PR’s. 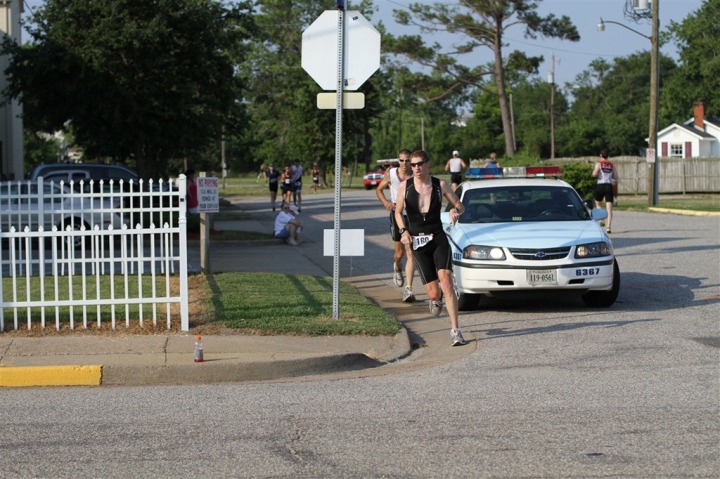 Despite my best efforts, a subpar run did me in from a PR standpoint.  I did manage to take a 3rd place AG award though!  And, perhaps even better – I got this sweet photo on the beach! 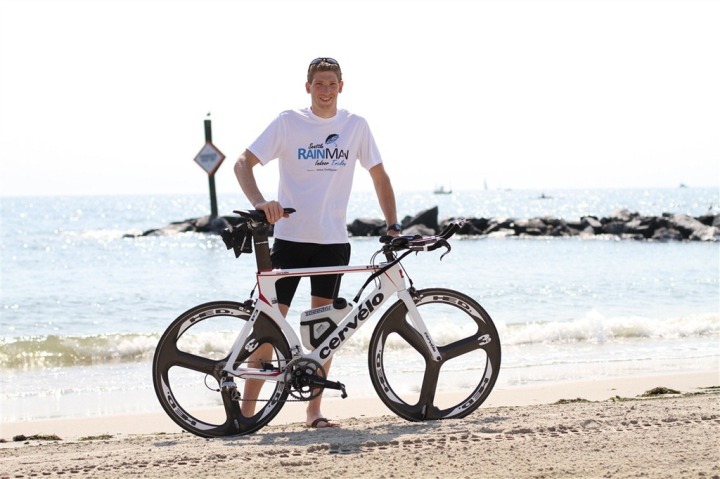 Ahh…July!  Finally, my ‘A’ race on the calendar.  The New York City Triathlon…Elite AG Wave.  Ready for the big show!  Well, that and an unreal dive start!  Craziness! 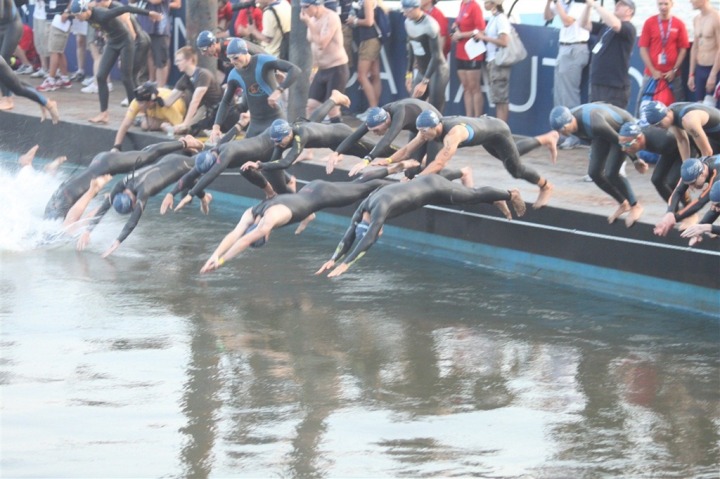 After the madness that was the downstream swim, I was onto the bike.  Though, for reasons that still aren’t clear to me today – the bike just didn’t jive.  You know when it just doesn’t feel right?  Well, that was the bike portion that day. 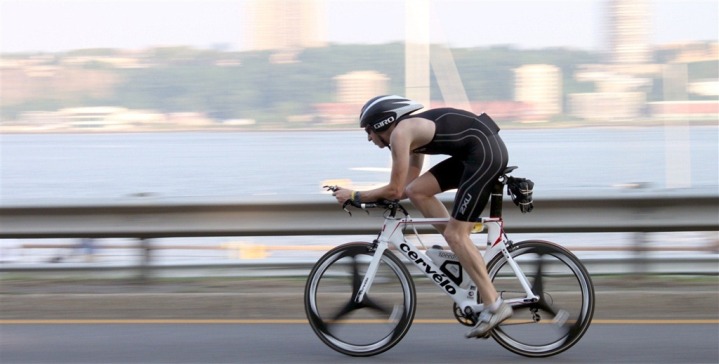 But, on the bright side – my run was pretty kickass.  I went 39:00 on the 10K run and was passing folks like crazy.  Additionally I tossed out a 10K triathlon run PR – so I was pretty happy to with that portion.

I was totally ready to dominate.

…I got three flat tires…in the same race.

Who gets three flat tires?  Seriously?  WHO!?! 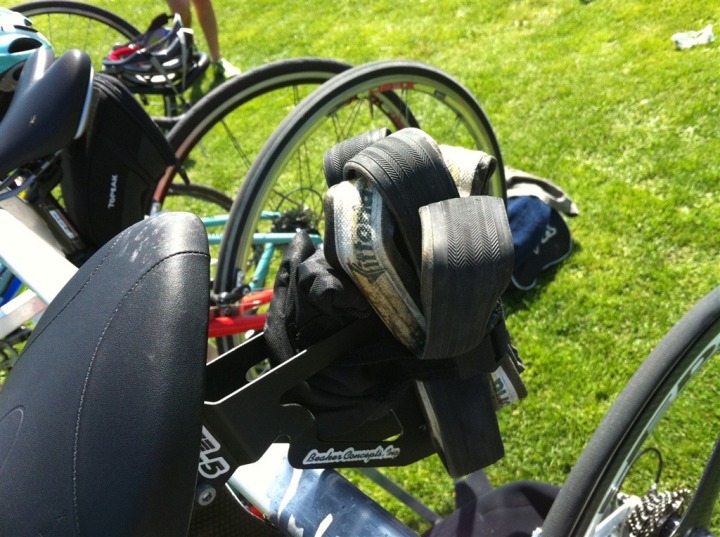 Too bad really, I was in very good position to take an overall podium spot. :-/

At this point my schedule was week after week of both domestic and international travel – so any races were merely ‘for fun’, which at that point in the season is what most folks want anyway.  I was up near my hometown Seattle, so I gave the Kirkland Triathlon a whirl.

I had a good solid swim, an entertainingly hilly bike – and a pretty darn fast run…despite falling flat on my face in the process.  Doh!

But, who else gets cool blood photos like this? 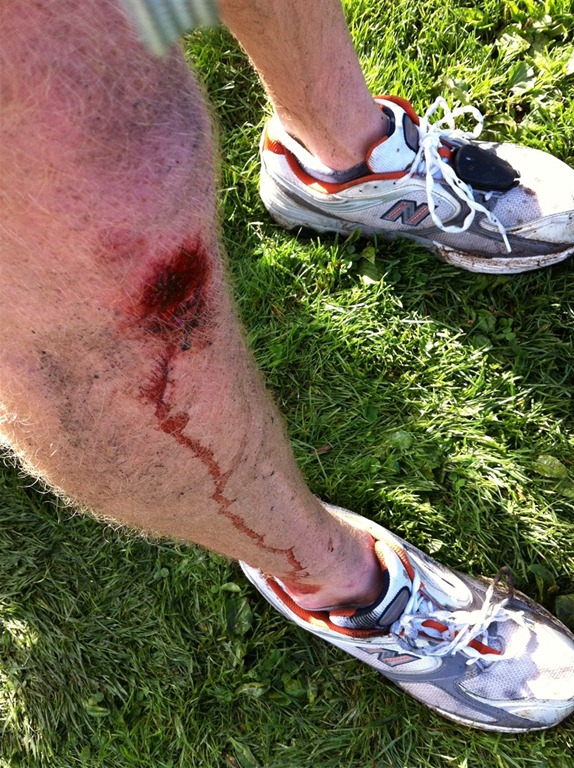 After arriving back into the states about 12 hours before the race started from another whirlwind international trip, this race was definitely a hail-Mary of sorts.  Last race of the season – throw it all out there…whatever little I had left in my jet-lagged body to give to the Giant Nut…well, the Giant Acorn. 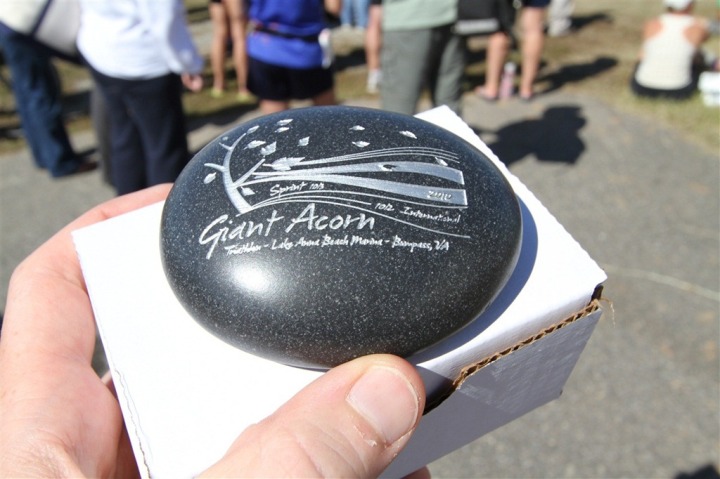 Once the race started I simply just went as hard as I could until I found the finish.  It wasn’t the pinnacle of my racing season – but it was enough to get me a rock! A shinny rock no less…which meant that I got on the podium!  Woot to rocks!

And just like that my 2010 triathlon season was over!

With no fall running races on my calendar due to non-stop international travel, I wrapped up racing for the year.  But next year…well…that won’t be the case. 🙂