The State of my State: 2008 Review Edition

It’s that time of year again – a recap of last year.  While most folks took care of this prerequisite post earlier this month…I meanwhile…was a slacker.

I’ve finally gotten my training records all sorted out.  As you may recall, I have a number of different logs that I use to track.  Well, after weeks of procrastination I got my master one all updated and have what I think are fairly accurate numbers.  They would be low if anything (if I missed something).

From the pretty charts, you can see where a knee injury in late 2007 carried over to February of 2008, thus limiting my ability to train.

Also keep in mind that cycling miles are sorta a non-valid number because 2/3rds of my bike workouts are on trainers, where the mileage is a variable function.  Hours are more valid.

Similar to last year, I’ll run through a recap of the year in as quick as manner possible.

So let’s start with the training numbers: 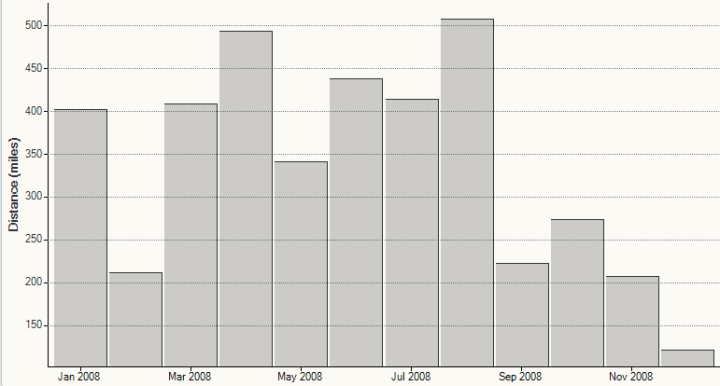 You’ll note a significant cycling drop-off starting in September post Ironman Canada.  That’s where I shifted to running being the major focus for the fall running season.  Of course, I was still cycling three times a week.  Well, except in December – travelling so much in then threw my cycling out the window. 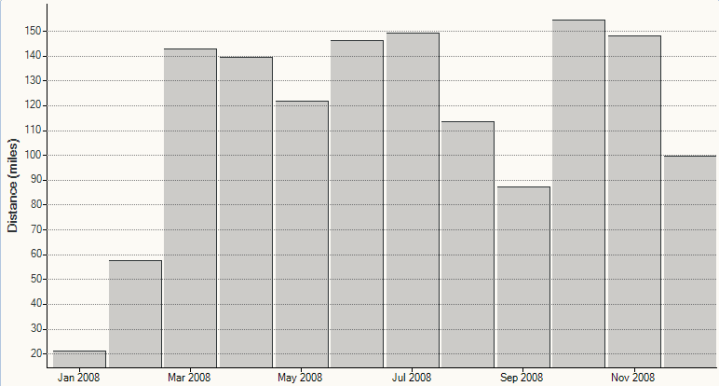 Running was impacted the most by my injury early last year.  But by March I was back in full gear.  I was able to dramatically increase my running endurance, but also increase some speed as well.  A typical  week for me is generally three runs:

These get mixed up a bit once my really long rides kick in (because then the long run shifts to Tuesday to avoid back to back long sessions), but generally I only have three runs a week. 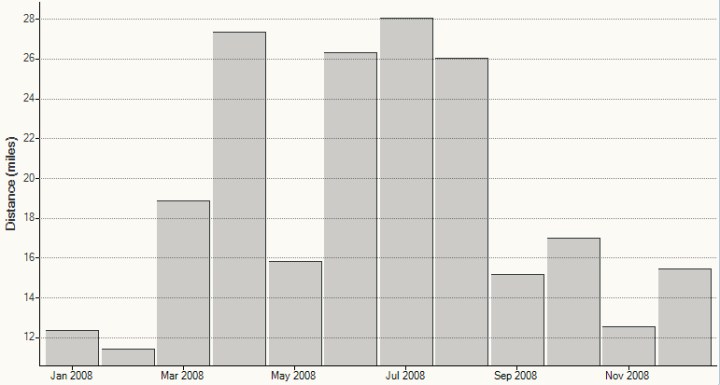 I swam a bit more this year than last (about four times as much).  You see above the big jumps during the summer months, that’s that result of Saturday long swims (7,000 yards a pop).  And that drop in May is the new coach taking time to work on technique.  Like the cycling, everything drops off in September to focus on running.

Quick Recap:
Overall training numbers were way up this year in many areas:

Of course, if I had an extra few months of running allowed (no Jan/Feb), we’d be talking a different game there.  But all in all, a solid training year.  So how about the races?

I can solidly state that my 2008 racing season went pretty well.  I completed two Oly’s, three half-Irons, one full-iron, one marathon, and a slew of shorter distance running races.  A few random highlights:

Oh, and I’m happy to report that I really didn’t have any race lowlights.  Sure, I had a few issues during a race like most, but overall there weren’t any DNF’s or complete blow-outs.  I am proud to say that I’ve managed to continue my streak through of throwing up in at least one out of every two tri’s I complete.  It’s pretty awesome.

So all in all I’d say the season went pretty well.  My cycling improved tremendously, as did my running, and my swimming endurance moved up quite a bit – although swimming is still my sore sport.

Of course, 95% of this is due to the extreme dedication of my coach.  I just simply do what he says day in and day out.  Run slower he says…ok I say.  Swim correctly he says…ok I say.  Bike more he says…ok I say.  He’s taught me it’s not just about volume – but also about specifity and recovery.  It’s not about running as fast as you can day in an day out – or riding as long as you can.  It’s about making every single workout have a specific reason…and count.

So what does next year bring?  Well…you’ll have to wait for Tuesday. 🙂