The Giant Acorn Triathlon (which I enjoy calling ‘The Giant Nut’ instead) is held about 90 minutes south of Washington DC at Lake Anna, the site of many other triathlons that I’ve done in the past – including the Rumpus in Bumpass, which was earlier this season.  While the two triathlons don’t share the same name…they do share the exact same course (well, a tiny-itsy-bit-different on the run with a small variation).  So in many ways, it’s sorta an interesting test from the start of the year to end of the year.

So we got an early start on things and left around 6AM…for the 10AM start.  The reason we left so early was in part because while I’ve driven down there a lot, the drive has a lot of variables and you can never quite be sure how long it would take.

And secondly, because unlike past races, I would be doing both a brief bike/run warm-up, as well as the usual short swim.  This was due to the lack of bike/run I’ve had over the past few days because of my travels zig-zagging around the the country and Caribbean.

On the bright side – we got an amazing kick-ass parking spot: 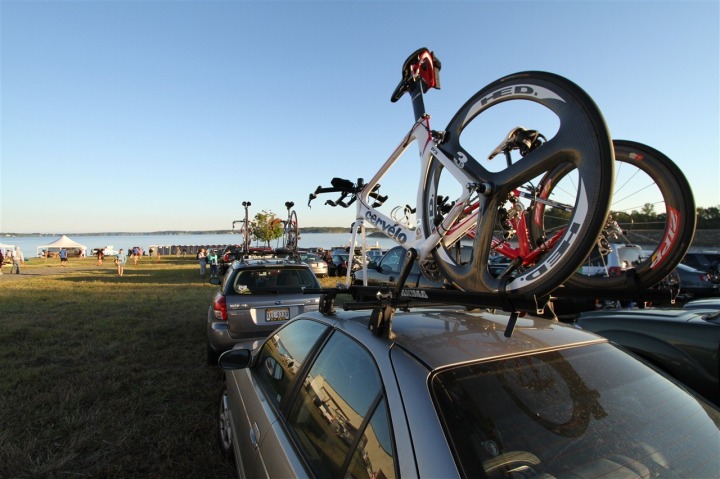 After picking up our packets we simply hung out in the car for quite a while.  We had about 45 minutes to kill, and it was fairly cool outside…so chillin’ inside it was.

Then it was time to setup the trainers and get a brief 14 minute warm-up in. 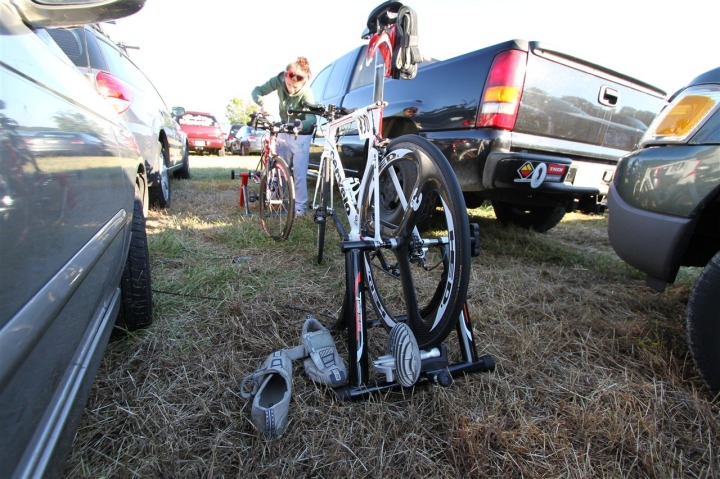 After which, I headed out for a short 10-ish minute run.  Mostly just easy, with a few quick 30-second intervals (not all out) tossed in to get the HR up.

From there, I got all my stuff ready and headed down to transition to get setup.  By that time, it was about 30 minutes prior to race time, so transition was pretty buzzing. 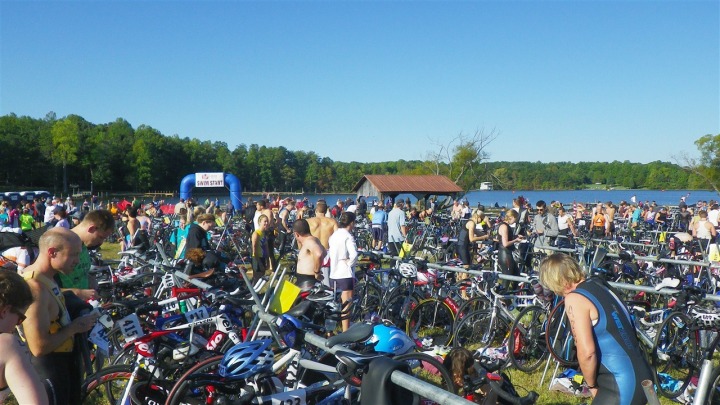 I can get things setup in about 5-7 minutes tops, so I didn’t need much time. 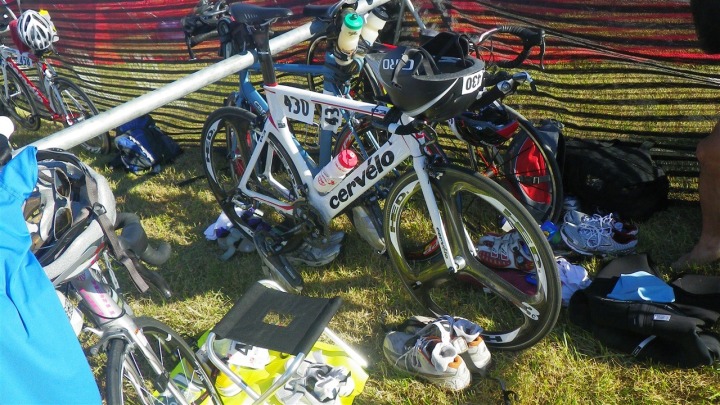 To be clear, the little stool is not mine…just the shoes in front of the wheel.  I sport a pretty compact transition area.

And with that, I headed out to the water to get my warm-up in and prepare for the race start.

Like Rumpus, the swim is basically a triangular affair that starts and ends on opposite sides of the transition area.  Here’s my nifty drawing from back then: 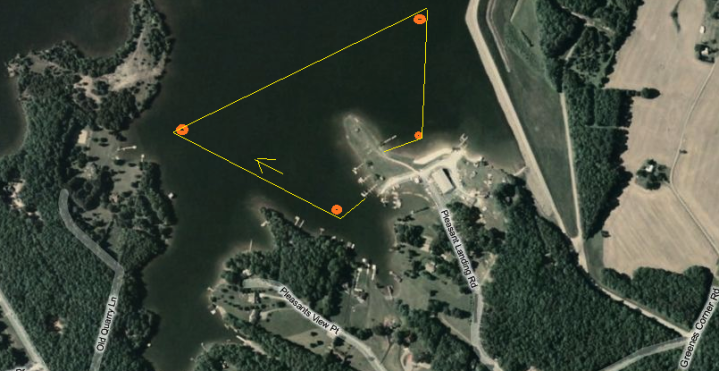 We got a 2-minute warning, a 1-minute, and then a 30-second warning before finally getting a 10-second count down.  I like the accurate start announcements, ya know…unlike The NYC Triathlon with the 2-minute (but really 46 second) warning system.  Though, I do like NYC’s all-downhill-swim. 🙂

With the horn sounding, we were off!  And it was thankfully a fairly calm start, as far as starts go.  People generally lined themselves up appropriately within the front lines at least – which is nice.

They told us during the pre-race announcements while we were floating in the water to ignore all of the buoys except the turn buoys – meaning, choose whichever side you wanted to be, as long as you were to the left of the turn buoy.  Which is actually standard for most races, though they don’t always announce it.

So, the most direct line to the first turn buoy put me there in about 6 minutes 30 seconds, not terribly far behind the lead pack.

But it was somewhere along that next leg and long part of that triangle that I seemed to slow down a bit.  I took the most direct route possible – which was a fair bit away from the sighting buoys (thankfully a few others including the lead pack agreed with me). Nonetheless, swimming is not my forte.

After the final turn buoy I ended up hitting the shoreline in 25:29 – or about 50 seconds faster than earlier this year.  Though, as is always the case, you never really know if a swim course is accurate or not – as most cases it’s just a best guess.

T1 was pretty quick in 1:48 – including a rather long run.  Unlike Rumpus, they changed the dismount line to be about 50 yards further.  This made the course a bit safer primarily to avoid folks having to mount/dismount on a short steep hill.  Here’s the fairly long run from transition to the mount line, which is located at the top of that hill: 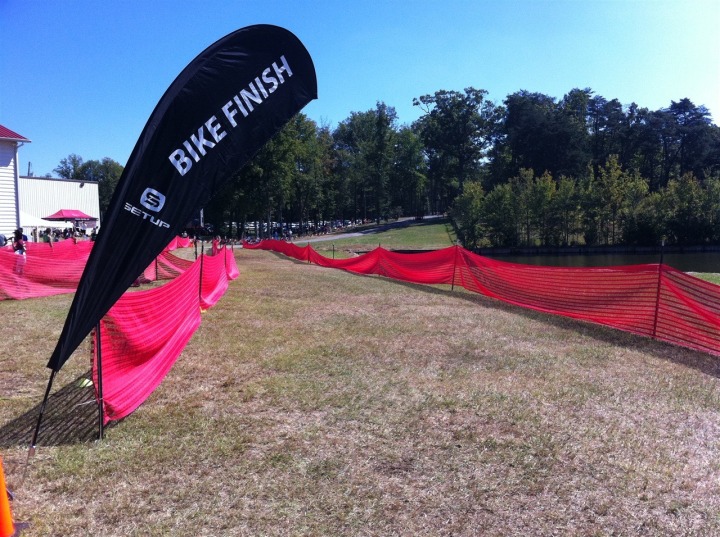 I also made a decision to put on my socks after the bike.  Which made things a lot easier.  At some point I’ll have to get used to running without socks, but for now…no thanks!

Nonetheless, putting them on after the bike is far easier/quicker than doing it post-swim.

I quickly got on the bike and started tracking down all them swimmers.  I may not be able to swim well, but I can track down the majority of those who can swim well.

The first few miles I also spent time slowly working my way back down into zone, as I was a bit high coming out of the water – which is perfectly normal.  In fact, in almost every race you’ll find that some of your highest heart rates are just out of T1.  You can see the red line (HR) slowly descending from it’s post-T1 high: 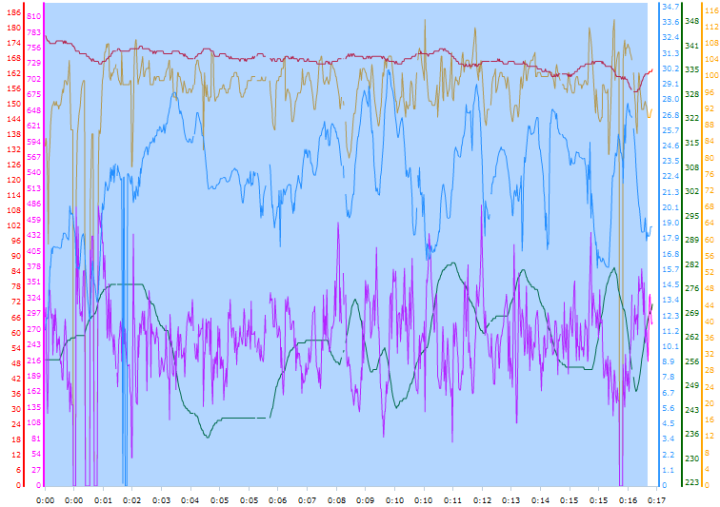 After I got back down into zone, I just settled into the ‘find and track down people’ mode.  As always, I pushed up the hills a bit, and recovered coming down the hills.

Being in the first swim wave, that meant that after a bit of time there weren’t many folks ahead of me.  So as I finished up the first loop I was looking forward to a fresh batch of folks to motivate me.

I finished the first loop in 30:57, putting me on target for about a 63-minute bike.  I was a bit concerned that the past three straight weeks of travel would really start to manifest itself in the next loop with the potential tiredness/exhaustion setting in.

So I instead focused on just tracking down every single person I could…as fast as I could.  By that time the later waves were out of the water and there realistically wasn’t a lot of folks that would be hard to pass – it was just a matter of doing it quickly and efficiently.

And…I had quite a bit of fun doing it. 🙂

As I ran into T1 I was also keenly aware that I was on pace for a sub-2:10 race…if I could run well.

During races I use a simple Garmin FR60 on one wrist simply to track total race time (as well as a 310XT during the run portion, and an Edge 500 during the bike).  It functions just in standard stop-watch mode, and is in effect acting no different than any other $15 sports watch from Wal-Mart.  So as I hit the transition mat leaving T2 I was very well aware that I crossed it at the 2:30:00 – giving me exactly 40 minutes and zero seconds to knock out the 10K run.

While a sub-40m 10K triathlon run is certainly in my repertoire, it’s also generally only in my bag of tricks when I’m not tired from weeks of travel.

So…off I went, running along.

The start of the run is briefly on some flats for a few hundred yards before hitting a short but steep hill that helps to smack down any hopes you had have posting a nice fast first mile run split.  For reference, that’d be the same hill picture above leaving transition in T1.

Nonetheless, once I crested that hill, I did go out and put down the next few miles out to the turnaround at a 6:12 pace – which I was happy with, as that was less than the required 6:26/mile needed for a 40-minute 10K. 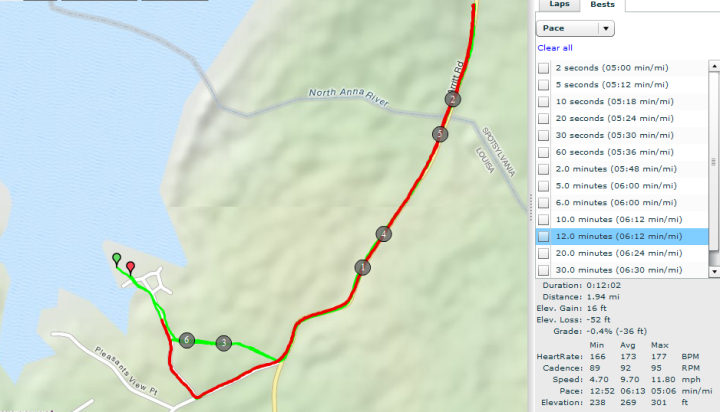 It should be pointed out that the entire length of that straight-away is not at all flat, in fact, it’s fairly rolling.  With a few short steeper sections that grind at your legs, as you can see below.

Unlike Rumpus, you loop back through the trees (where you see the #3, #6 above) for your second loop.  Whereas in the case of Rumpus, you simply turn around on a parking lot near there.

The trees add a new dimension as you enter them following a slight incline – so in my case I was a bit tired and you then had to pay attention for tree limbs to not trip over.  But on the bright side, it offered something different than road – so I was all down with the terrain switch-up.

However, the terrain that was starting to make a dent in me was the rolling hills.  My legs were getting shot.  Now, I knew even on Friday night 12 hours prior that I was probably going to be in pain, as they were already tired from the constant squishing into small seats at the back of the plane over the past few days.  I had flights separated every 24 hours for 4 days straight.  Tall people don’t fit well into planes.

So some of those rollers were putting a hurtin’ on not on my legs, but also my pace.  You can see this below in a brief chart Coach Alan put together, showing the last few miles:

(The left middle show target HR, and then the middle column is Min/Avg/Max HR’s)

As you can see…things slowed, a lot.  I was hurtin’.  I kept on pushin’, but there was simply not much left.  I did manage to take out one last person in my age group in the process though.

But I was also ecstatic that by time the last few hundred yards came around, I didn’t have to sprint for the finish to hold place…otherwise I would have really been in trouble. 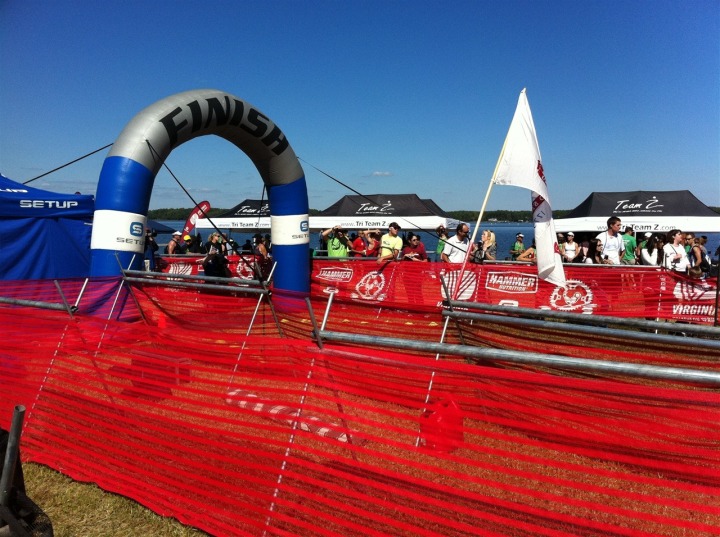 Final run time – 41:12…not exactly a PR by any stretch…but certainly pretty darn good given the previous week.

Overall time was 2:11:07 – or about a minute faster than earlier in the season.

After watching The Girl finish up about 15 minutes later I headed over to grab some food.. 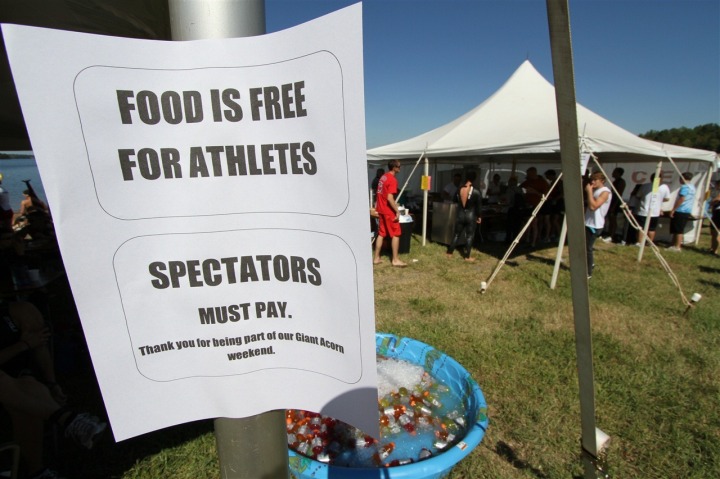 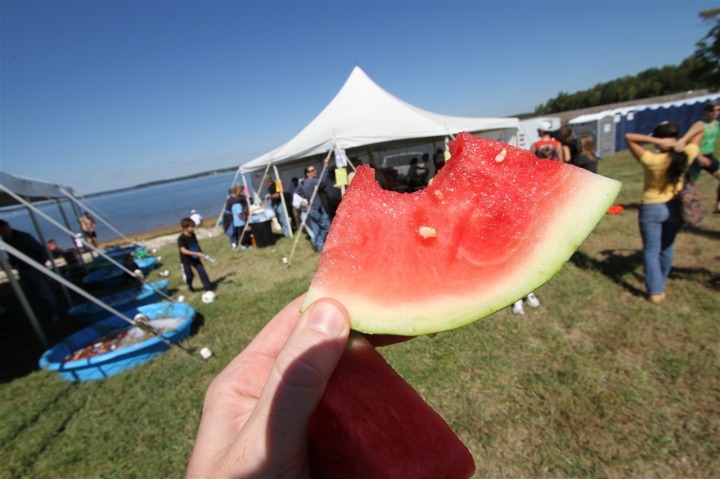 …then snuck in to check out the results: 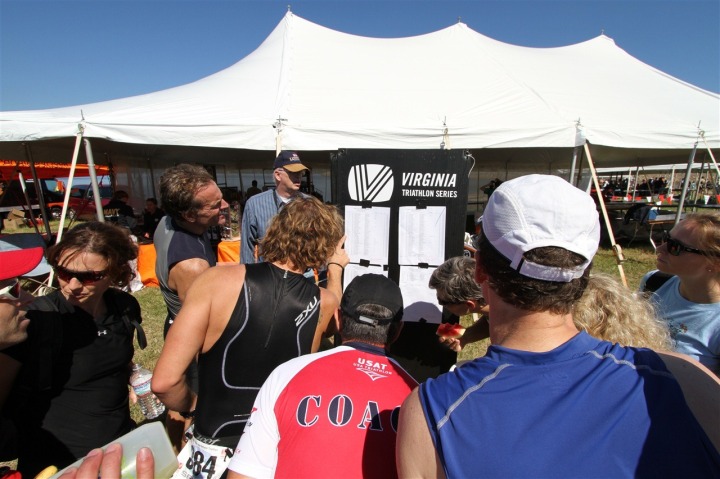 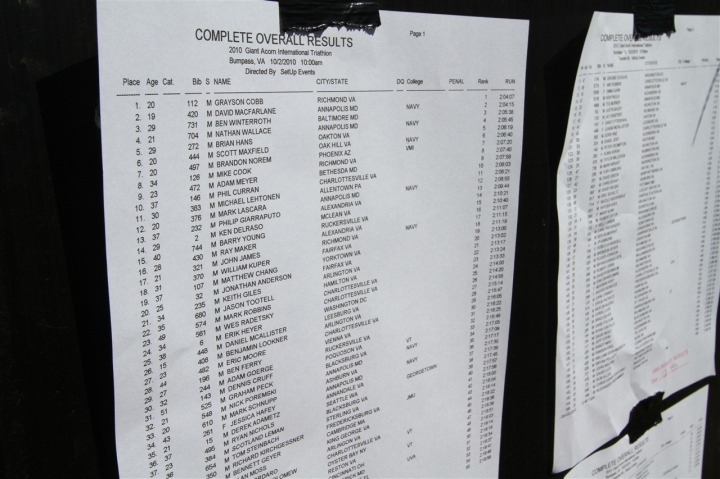 It would turn out that my time would hold up for a 3rd place AG placing – so I was fairly happy with that! 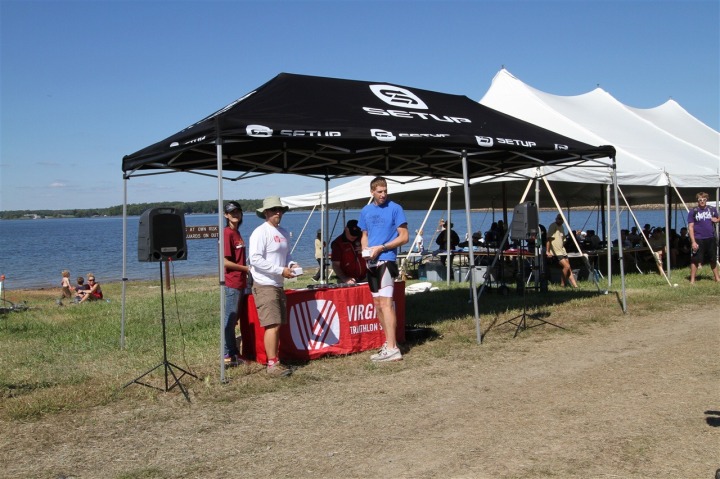 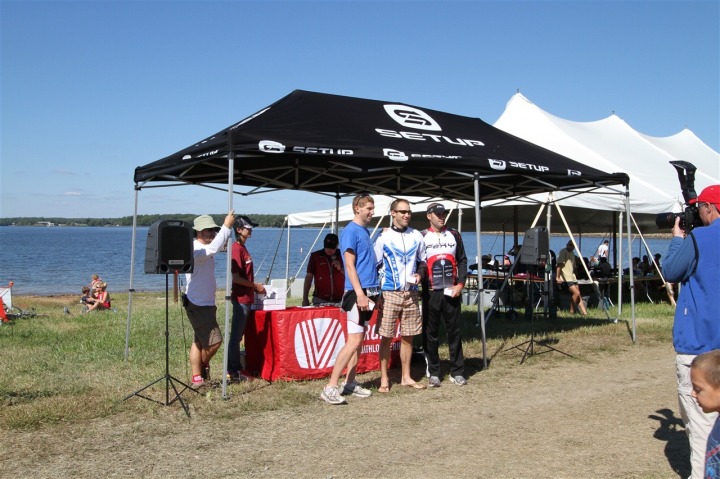 And, the award included a nicely engraved rock.  The engraving is actually pretty cool…and much better than the visor’s from earlier this year And the rock is on par with the cool beer mugs from Rumpus. 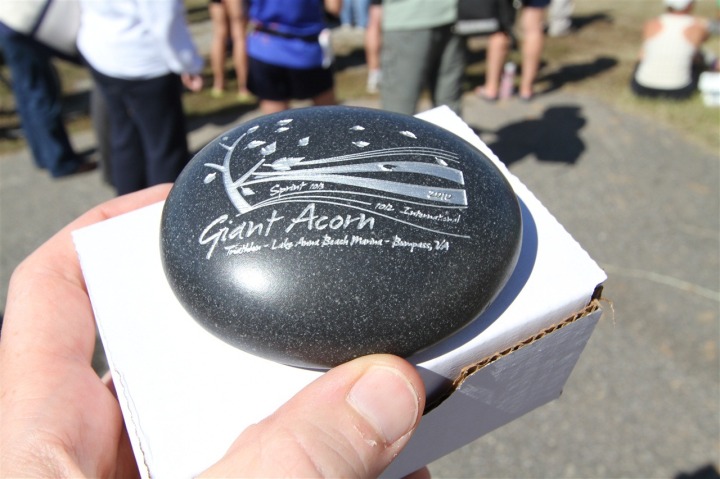 After The Girl picked up her award for a solid AG placing and Top 5 overall female…we packed up the car and did the only logical thing left to do…DQ: 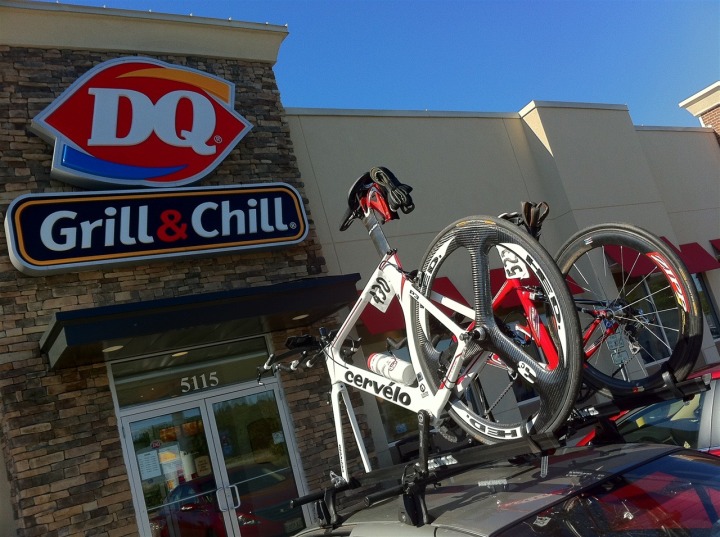 So with that, the 2010 triathlon season is over…now it’s time to transition into some running races for the rest of the fall – squeezing them in between all my planned foreign and domestic travel.  Eek!