There are early race start times…and then there’s Nautica’s NYC Triathlon start times.  How early you might ask?

I don’t even think the birds are up that early.  But…I was.

Actually, I was up at 4:00AM.  Luckily, I stayed at the host hotel (NYC Hilton), which meant that all I had to do was walk downstairs to the free athlete and spectator shuttle busses.  If you’re from out of town, and you do the NYC Tri, just make your life easier and stay at the host hotel – best decision I made all week.  Plus, it’s where the Expo and packet pickup is, among other things.

The busses were quick and efficient – moving us the thirty or so blocks up towards the transition area in just about 15 minutes.  Much better than dealing with a cab.  Since our bikes had to be racked on Saturday, it was mostly a matter of getting the last minute details all set in transition. 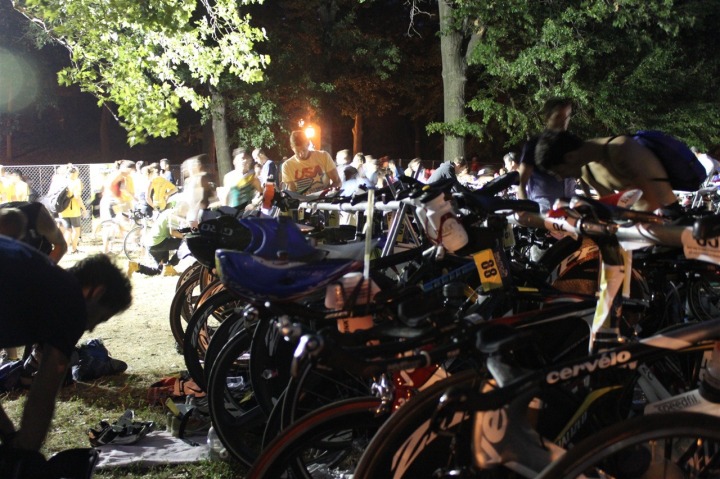 I’m there in yellow with the USA t-shirt on.  Now, one would think that given all I had to do was focus on the items on my checklist (ya know, the one I wrote a big ole post on), that it would be quick and efficient.

One would be wrong. 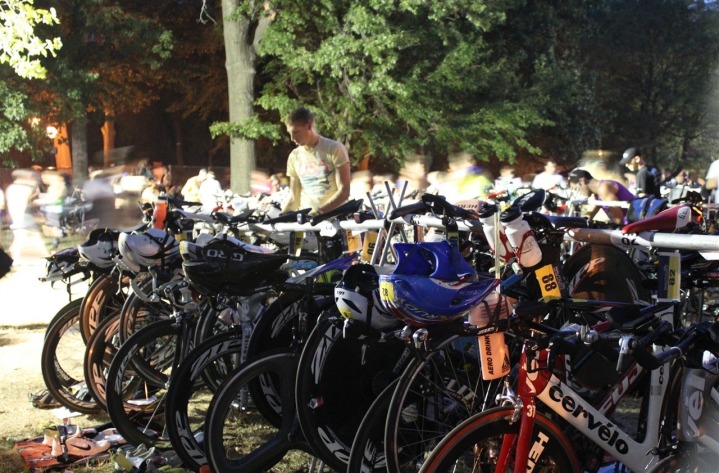 That’s because I apparently need a checklist to remember the checklist, as I forgot the checklist.  Which started first with realizing I had forgot my swim goggles at the hotel.  In the grand scheme of things to forget, this is on the ‘good’ list.  Many triathletes (including myself) normally carry multiple pairs of swim goggles in their transition bags.  Unfortunately I did not today.  Nonetheless, after a short bit of asking around I very nice woman let me borrow a very pink pair of goggles.  Hey, beggars can’t be choosers! 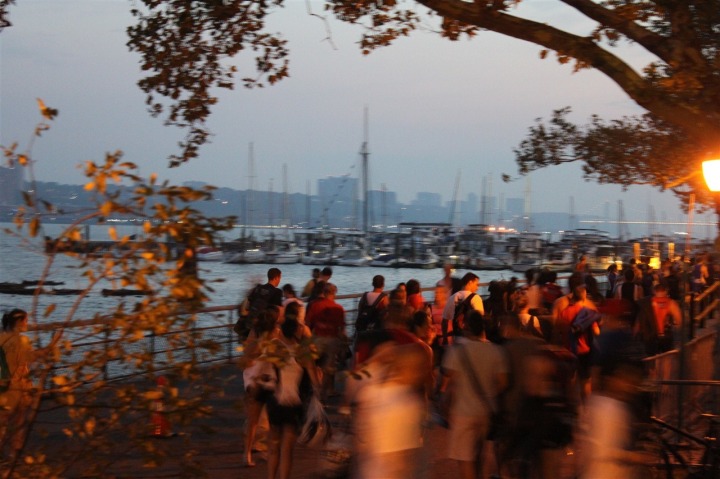 About, say, a quarter of a mile into that effort I realized I forgot to leave my race belt behind in transition.  So…I got in a good little morning jog. 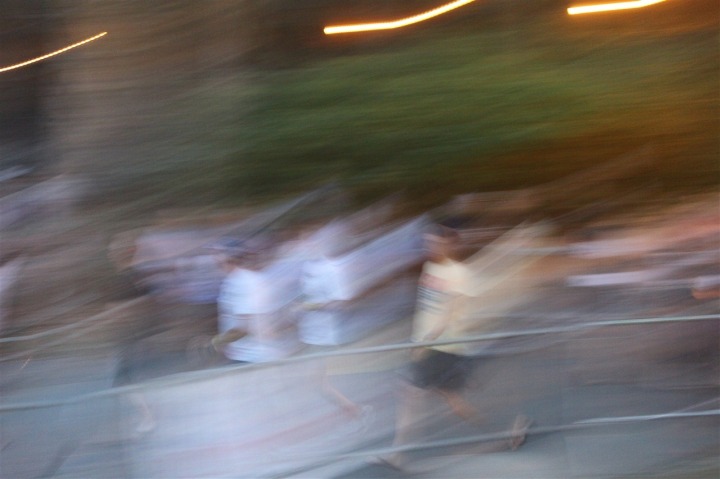 This wasn’t a horrible thing per se, as they didn’t allow any pre-swim warm-up, so Coach wanted me to get the heart rate up a bit anyway – thus it kinda worked out.

From there, I then jogged a fair bit more to the start, as now I was running slightly late.  Eventually I found my pen.  Though empty at the moment, it would quickly fill up with 68 folks in my wave. 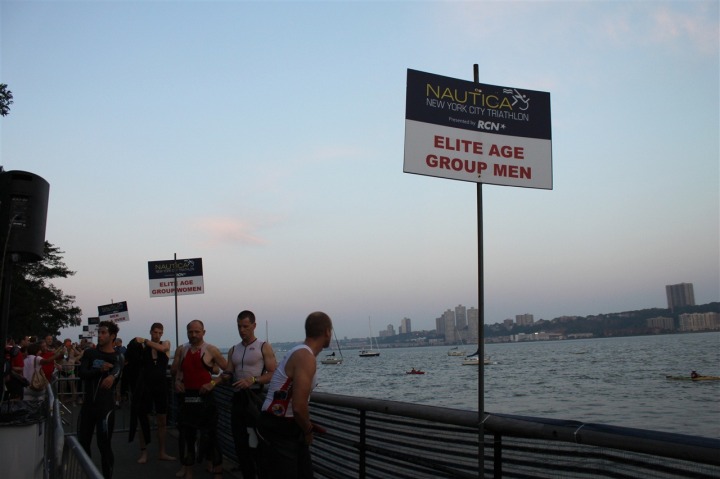 As you probably noticed above, I was actually racing in the ‘Age Group Elite’ wave, which is based upon a required qualifying time.  One little detail I didn’t know until earlier this week was that the AG Elite wave would actually be doing a dive start.  It should be noted that I am *not* a swimmer.  I very clearly remember trying to dive off the McCollum Pool outdoor diving board when I was 5 years old in swim class as a mino.  9 out of 10 dives would result in some sort of belly-flopping pain.

Nonetheless, no time like the present to figure this out.  So without any practice in this subject area, they called out our wave and I set up camp on the floating platform. 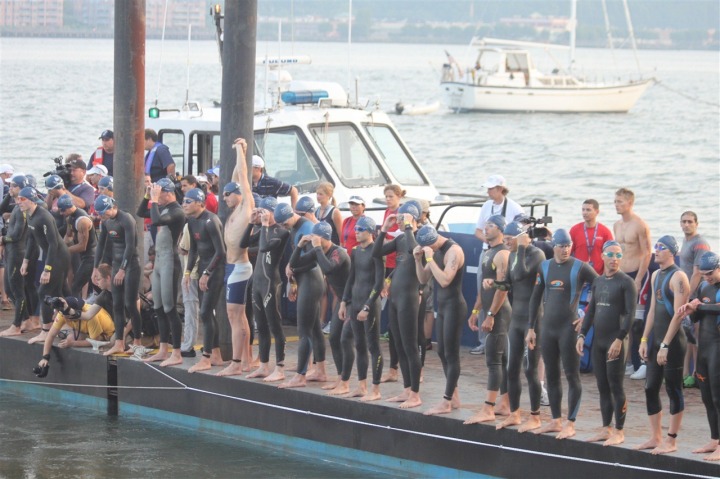 It might not look it in these pictures, but that platform is actually sorta high up.  Pansy I am perhaps, but I saw no way this was going to end…err…start well. 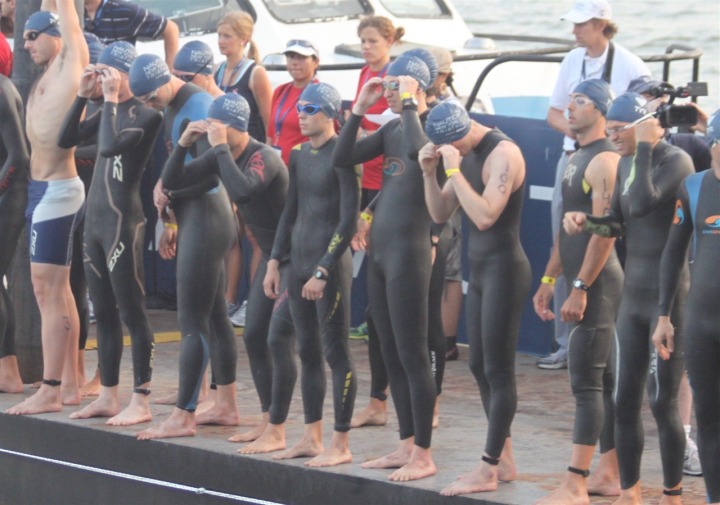 (I’m above roughly in the middle adjusting my goggles, standing taller)

A two minute warning came, and I continued to contemplate the best way to approach the water.  I checked out all the other guys, and they had one foot roughly forward, and they were…HOOOOOONNNKK.

Some 45 seconds after the initial 2-minute warning, the horn went off.  And all of us confusingly bumbled into the water.  The Girl later on noted that even spectators were pretty confused, let alone us athletes.  Here I am roughly in the middle of the divers (and roughly diving): 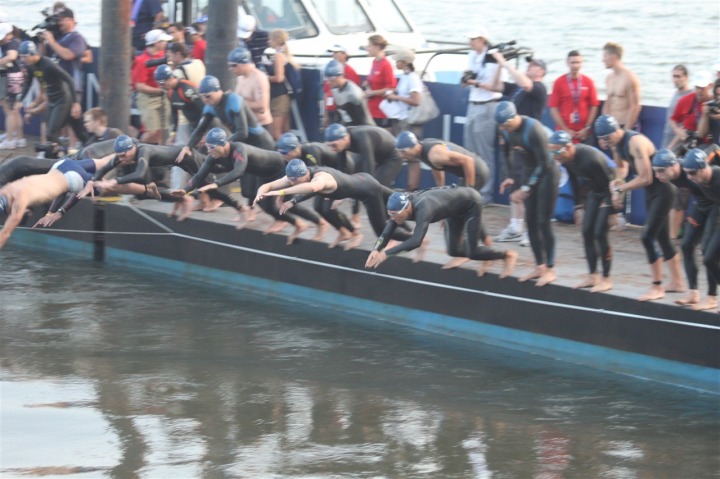 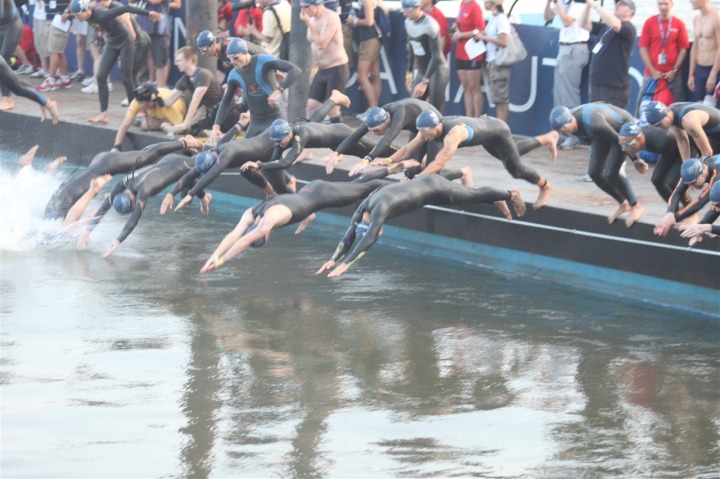 Could have been worse.  At least I wasn’t canon-balling in.  Though, I contemplated it.  I ended up departing the platform roughly horizontal, so my dignity was mostly salvaged.

From there, we swam. 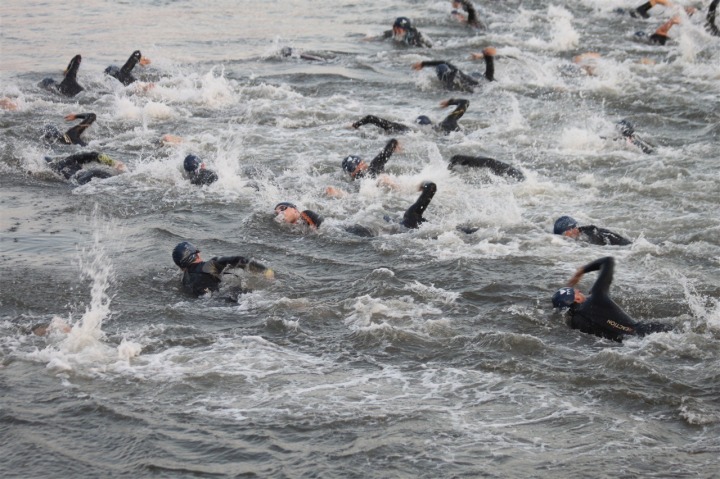 The swim at NYC is probably the easiest openwater swim you will ever have.  It’s ‘all downhill’.  A point to point affair that’s downriver, and directly alongside a seawall, with sailboats on the other side.  It’s essentially impossible to screw up from a sighting standpoint. Here’s what the course looked like a bit later in the morning: 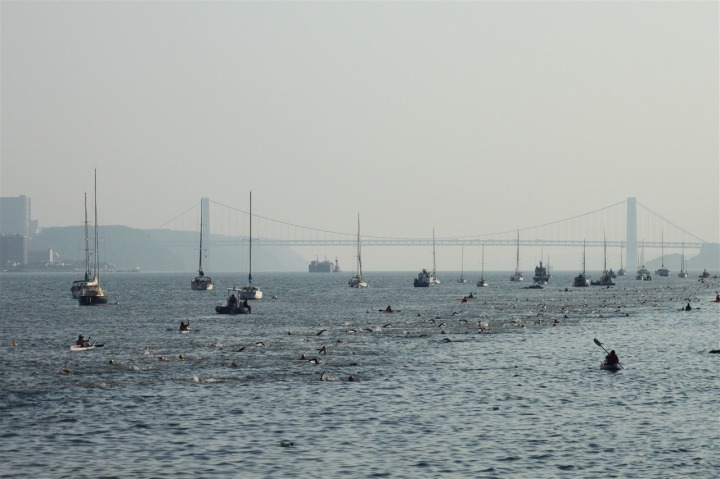 There’s a fair bit of downstream current, but unlike past years, the current was actually at it’s lowest point for the Pro’s and Elites (.5 knots).  It would more than triple by time the later age group waves would start.  Crazy.

The good thing with sighting along the wall was that when my borrowed goggles fogged up and filled up with water…three times…it didn’t really matter.  Just keep the wall-ish looking thing to my left at roughly the same size.  That I could manage.  Though, I probably lost a minute of time because I could hold onto people in front of me (as I couldn’t see them). 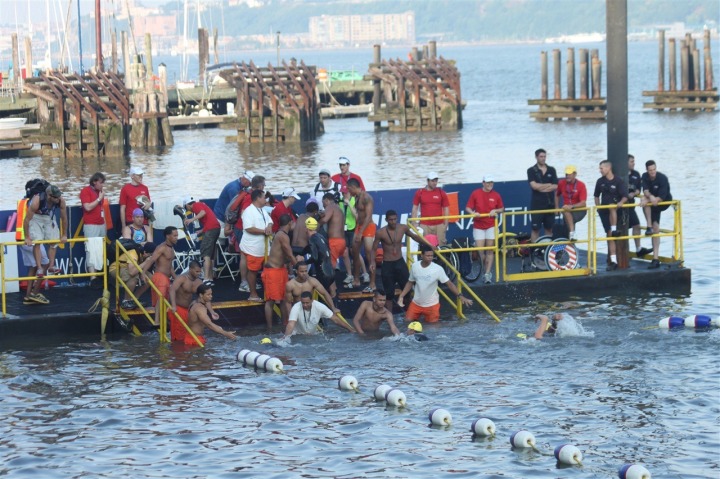 From there it would be a long 750 yard run to the entrance of transition.  This is a half a mile for those non-math folks like me.  It’s a long way.  But, it actually gave me a moment to calm down post-swim, so I really didn’t mind.

The bike started off with a short but steep ascent out of transition.  If you weren’t prepared for it (read: Didn’t do your homework), you were probably hosed.  Thankfully, I browsed the transition area on Saturday, getting the lay of the land.

After that, it was time to bike.  I’m in the middle in the picture below, while the ref checks out the guy behind me for drafting.  Interestingly, there would be a number of drafting/position violations handed out within the Elite field – for which I’m happy they were enforcing.  Including a few on the results that showed three position violations, which in theory is a DQ, so gotta check back to see if they eventually get DQ’d. 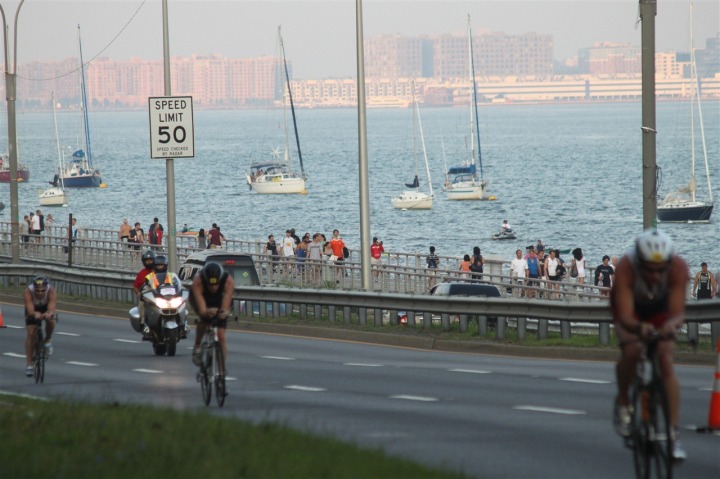 I really don’t have much to say on the bike.  I spent a minute or two during the first 10 minutes once again futzing with the Speedfil hydration system. First, the fabric piece had somehow covered up the tube end, so I couldn’t get water out.  Then, the tube had inexplicably become kinked inside the bottle.  Net resultant was still no water coming out.

I will point out that I did a damn impressive job of holding pace during my re-engineering efforts.  I knew though that water would be super-critical for the day’s success, given the high temperatures and humidity.  I eventually figured it out, but the bottle will be removed permanently now.  I’ve just had too many issues with it and can’t depend on it.  I’ve had now three races with some sort of issue with it.  While it works mostly fine in training, something always seems to go wrong during races.  So, goodbye.

Speaking of bye’s, my heart rate sorta had the bottom fall out on it about half-way into the bike.  I slowed down a fair bit, and just seemed to look some momentum there.  Kinda disappointed with my overall bike split.  I’ve raced half-iron’s at faster overall splits than this.

I was able to pick it up a little again as I came back towards the bike finish – but still wasn’t wearing I wanted to me.

However, on the positive side – The Girl got some pretty kickass pictures, including this one: 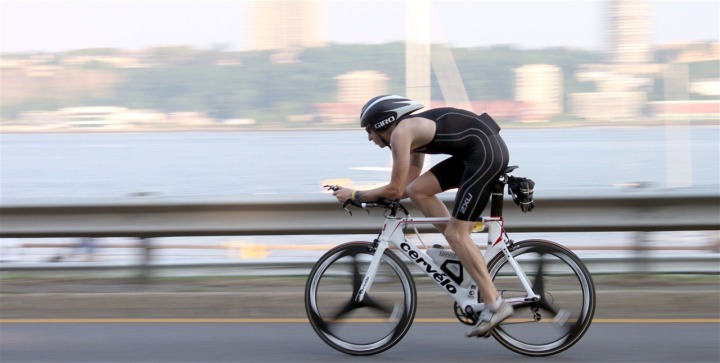 After some 1:10 on the bike, I went ahead and ditched in in T2.  Though, my T2 time was actually pretty respectable – likely due to my kickass bike rack position, as well transition practicing.

I was looking forward to the run.  Not that I had any reason why I should.  Looking at the simple facts, there was going to be little enjoyable on the run: Heat, humidity, and hella hilly.

But, it start off with a run through the streets of NYC across to central park.  Here’s what it looked like a bit later after I was finished: 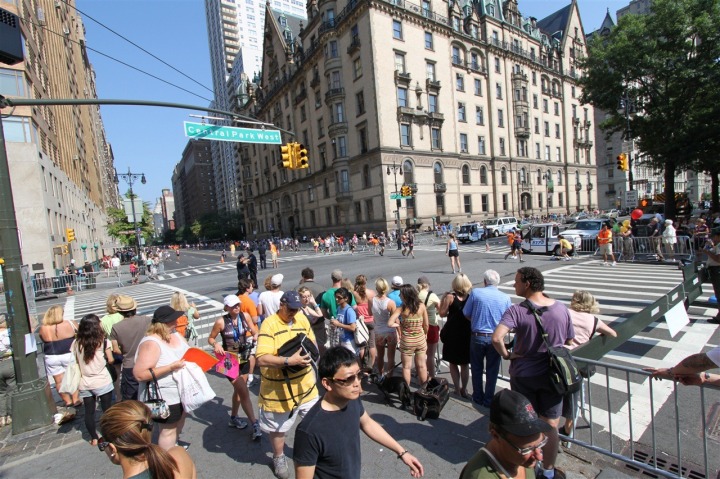 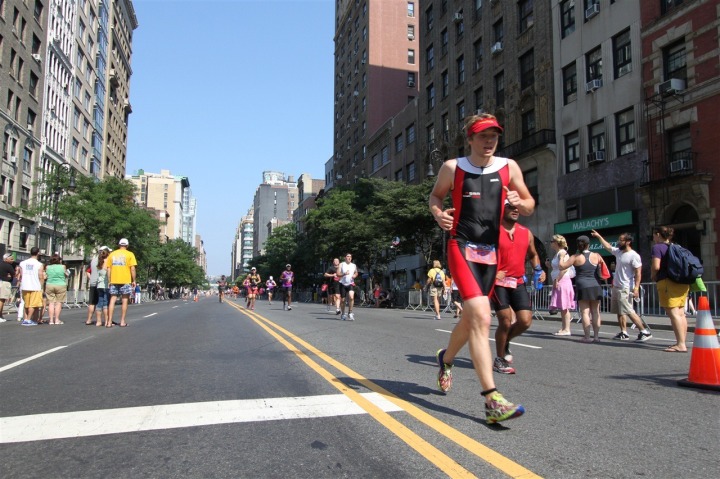 It was probably one of the cooler race experiences when I crossed.  Because I was pretty early in the day, only a relative handful of folks had gone down the street.  And it was just a few folks ahead or behind me on the entire straightaway – so it was like a scene out of the NYC Marathon TV coverage where they’re running down the crowded streets all to themselves.  Cool stuff.

Even cooler was that I was hunting down folks like it was nobody’s business.

The run has always been my strongest sport, and I was looking to reel lots of people in.  I had hydrated the living crap out of myself over the previous 3-4 days, in hopes of making the hot and humid run experience a bit better.

I didn’t have any issues with heat (and I usually do).  And, the hills didn’t bother me either (unlike most of the folks I passed on them).

As for the rest of the run, it was just a lot of up and down.  I was constantly cold dumping water on myself every mile, and taking a bit in too.  I kept the pace constant on my Garmin, and then once I hit the last mile, I kicked it up a notch.

Exactly 39:00 later I found the finish line – which I was pretty happy about. 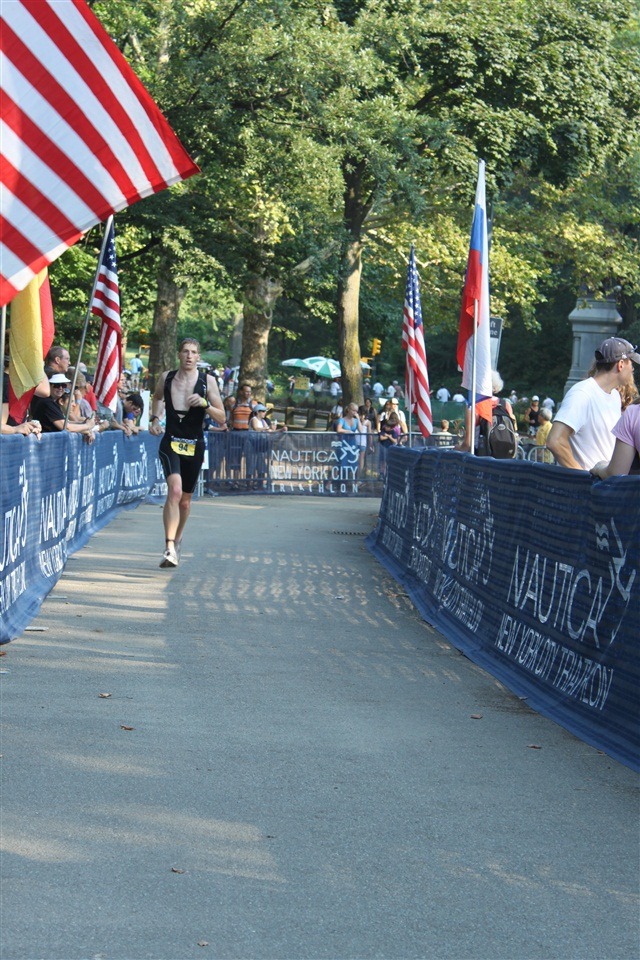 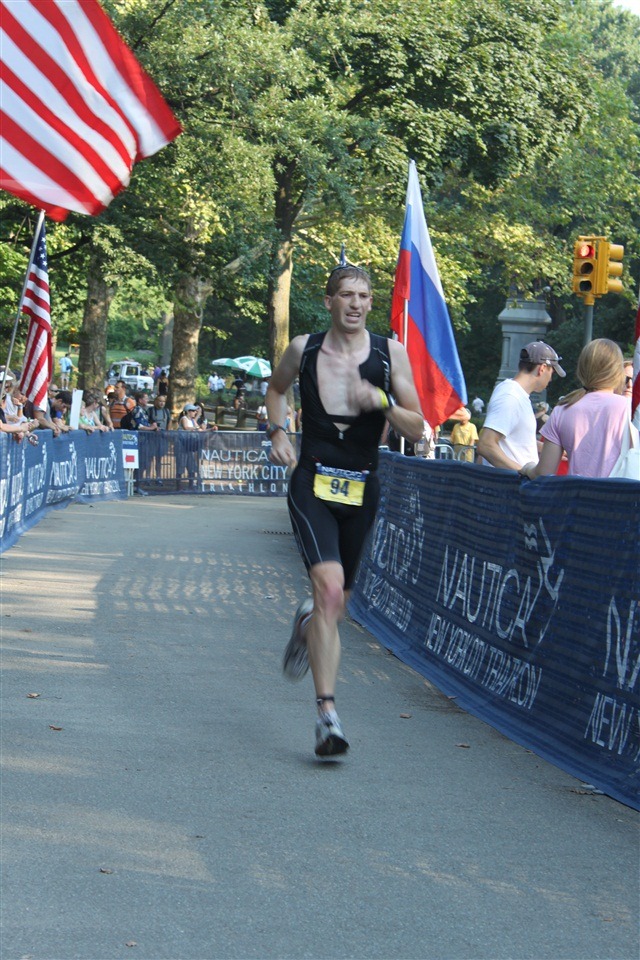 My overall time was 2:10:35.  I actually didn’t know my total event time at all during the race, as during the initial swim-dive confusion my watch didn’t get started.  Had I known I was so close to the elusive sub-2:10 marker, I would have somehow found a way to get that done.

Speaking of getting it done…the finish line area was quite solid.  Everything from cold showering water to drinks and massages.  Well done.  I found quite the pile of liquid loot to take with me. 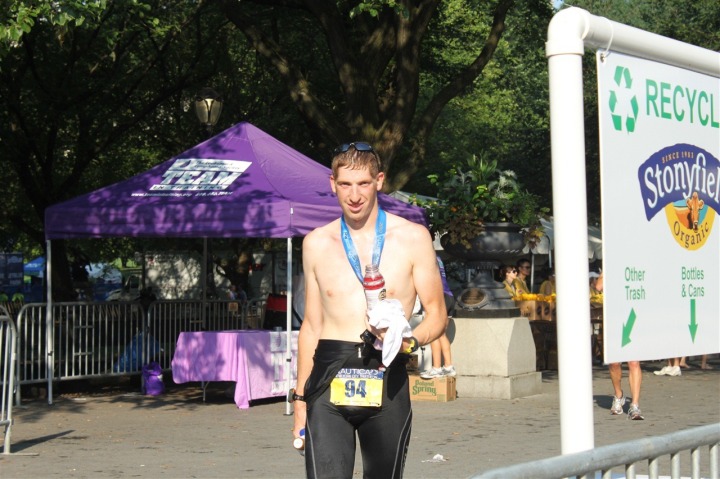 Afterwards, I waited below the sign for M-R.  I figured that’d take care of either my first, or last name. 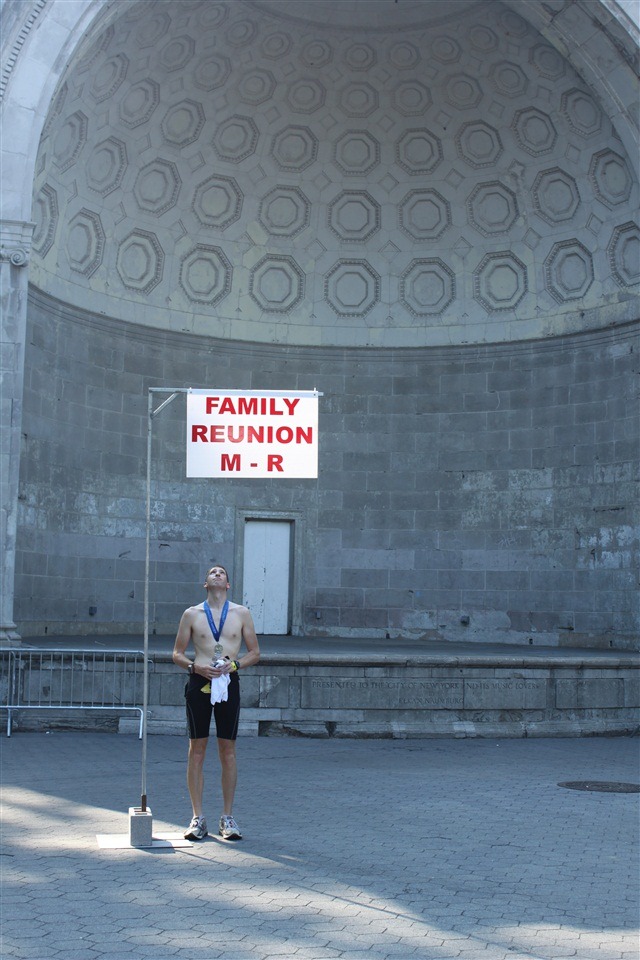 So with that, here’s my total splits:

I finished in the top-half of the AG elites, which I was happy about.  The very pointy end had significantly faster times, but those are the same guys who are in process for pro-cards.  So not too bad overall.  I’d like to get my bike times back in order, along with clean-up the swim a bit more.  My next race is up in Northern Canada, so in a MUCH cooler climate – which will play well for me.

Btw, an interesting little tidbit about the race – there’s actually some slight course variances between the different waves, due to different transition areas.  Here’s a little table comparing what the difference would have been had I raced in the normal M25-29 wave.

I think in the end, it’s all about your strengths.  If you’re a runner, then in some ways having a later wave helps as it slows down the bike course from a high speed standpoint (passing), but lengthens the run.  Whereas if you’re a swimmer, you want the slower river speed to gain more ground.  Fwiw, had I raced in the normal M25-20 grouping, I would have finished 2nd.  But, I like a challenge, hence the elite wave.

Oh, and for fun – here’s all the waves (click to expand)…crazy, I know! 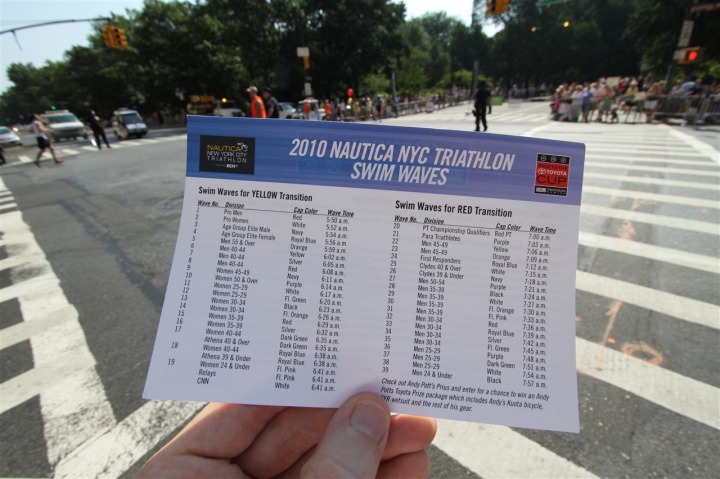 With that, thanks to everyone that cheered my name out there – be it racers on the course, or spectators – I appreciate it!

Have a good one!

Actually, one more-thing.  I didn’t know where to put this picture, so I’ll put it here.  The little transition labels were pretty funny, here’s mine: