The Old Point Tidewater Triathlon is a semi-local triathlon a few hours south of Washington DC in the Virginia Beach area.  We picked the race as a nice ‘in between’ race after Rev3 Knoxville in May and the NYC Triathlon in July.

The race is held on the oceans edge, with a beach swim followed by a multi-loop bike and swim course essentially along the water.  The area itself is as flat as Florida, and thus the course would be quite a bit of fun as flat and fast.

We arrived around 6AM on race morning, just in time to pickup my timing chip, get body marked, and then get in transition and get stuff sorted out. 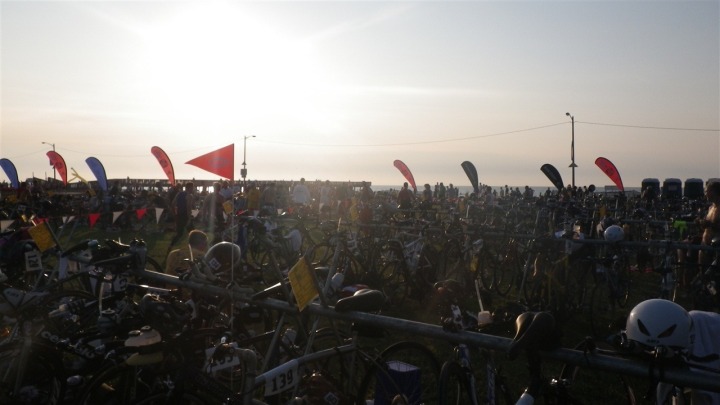 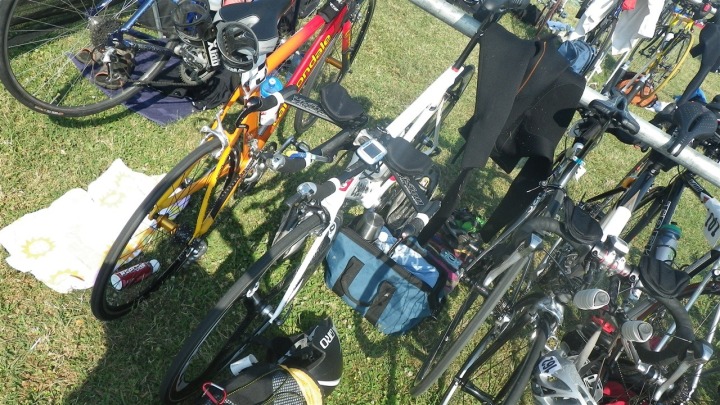 From there, it was over to the porta potty lines…which while short, were oddly slow.  Some people were apparently writing memoirs in there.  Not the time peeps! 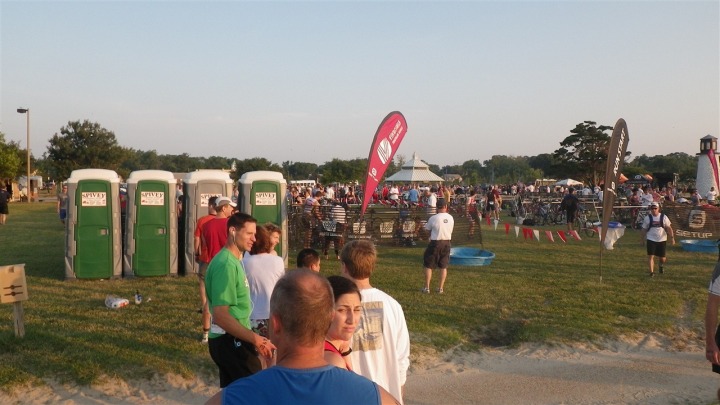 After that there wasn’t much time left, so I headed on over to the swim course start.

The Tidewater swim course is a spectators dream.  It creates a two-loop triangle around a long pier extending out into the center of the triangle.  This would be the second time I’ve done a swim course where you exit the water and then re-enter the water again.  The first time was Ironman Florida last year.

I was a bit behind the eight-ball when it came to getting ready for the swim start, as I thought I was starting a bit later than I really was.  Nonetheless, by time the buzzer sounded I was right up along the front right edge and cruising along.

I found some really nice clear water along the right edge, with virtually no contact.  I was situated just a few meters off to the side of everyone, perfect so that I could sight off of them without having to forward sight – but just out of the fray to avoid get rustled up.

I neared the end of the first 750m lap in about 11 minutes, which I was pretty happy with.  I think there’s probably a bit better line (more direct) I could have found coming back to shore both times – after looking at the map, but that’s water under the bridge…

Here’s me coming out and running under the pier after the first lap.  Btw, all of the in-race pictures are from my friend Bruce – who you’ll remember as taking many of my race photos, and also flying us to a few different races/locations. 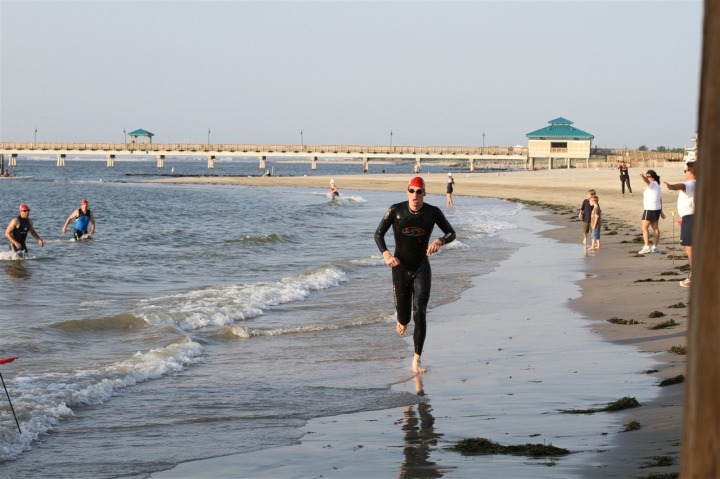 Btw, less you think that running in between laps is anywhere near relaxing…it’s not.  In fact, I’m pretty sure I managed to log my highest heart rate in that short little 30-45 second jaunt between laps.

I went ahead and wore the new Timex Global Trainer in my swim cap for fun.  I normally have a policy of not doing this during races cause I don’t want to lose it – but the start waves were small enough I wasn’t worried.  This produced a rather pretty looking picture of the swim course – and also generated a roughly accurate map. 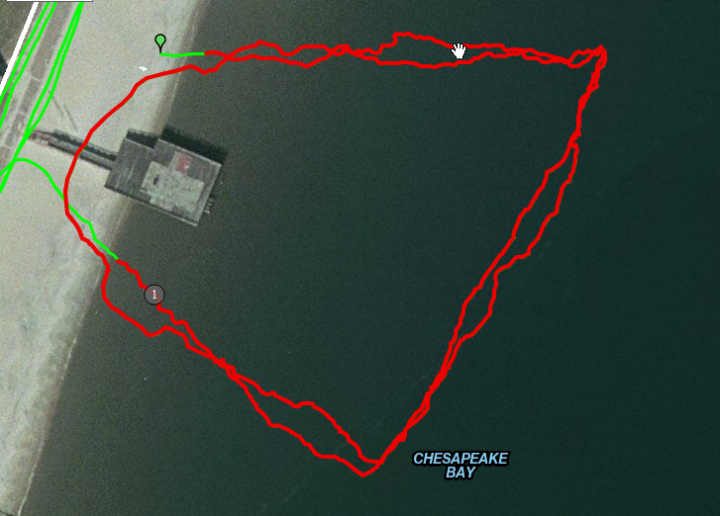 The distance measured was actually pretty accurate, just slightly over the ‘official’ distance, but given I likely didn’t swim a perfect route, this is logical.  Remember my CSI-style swim course measuring?

Oh, one thing I didn’t find out until afterwards is why I was feeling a strange sensation during some of my swim strokes.  You know how sometimes your hand pulls the water a certain way and it creates a little eddy?  I kept thinking that’s what I was doing – but I couldn’t figure out how in a few million yards of swimming I’d NEVER had this exact sensation before – and yet here I was having it a dozen plus times in a row.    Turns out, I was grabbing small jellyfish.  No worries though, no stingers on them yet.

Anyway, soon I was exiting the water for the second and last time. 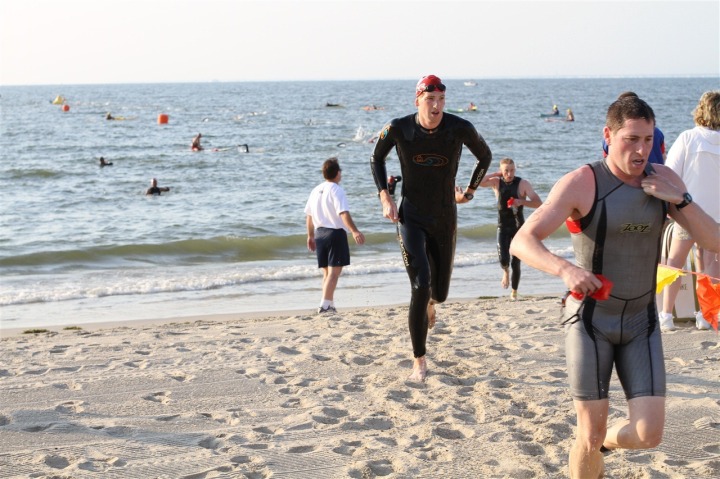 Total swim time was 23:28 – which is pretty solid for me, especially given 30-45 seconds of that time was spent running (which wasn’t part of the official measured distance).

From there I went into T1 and aside from running to the wrong rack, wasn’t too bad. 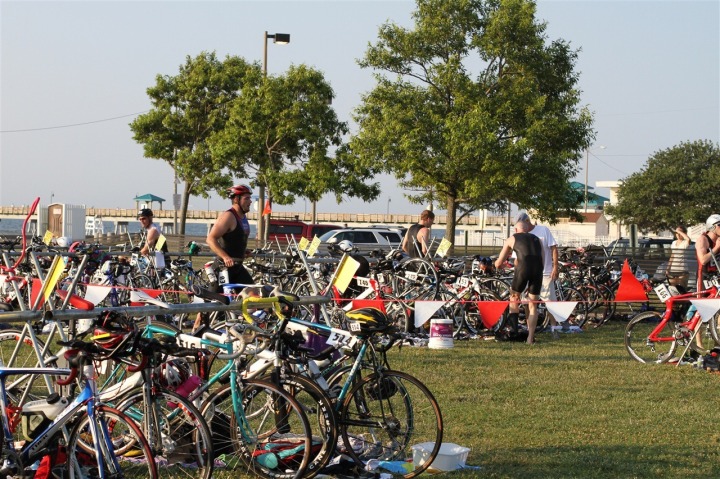 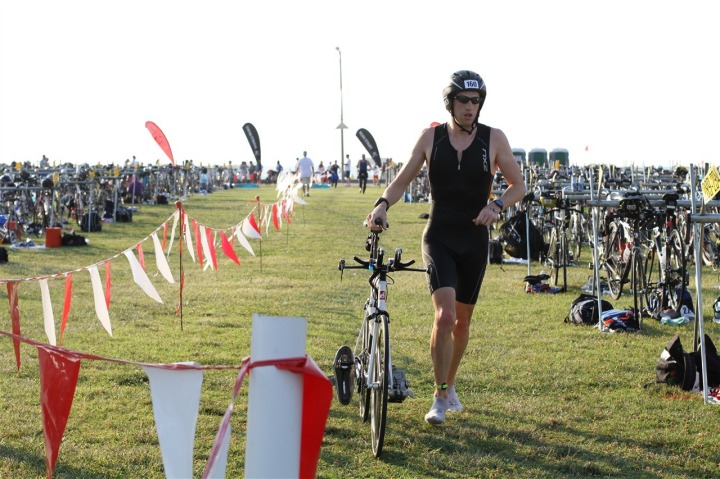 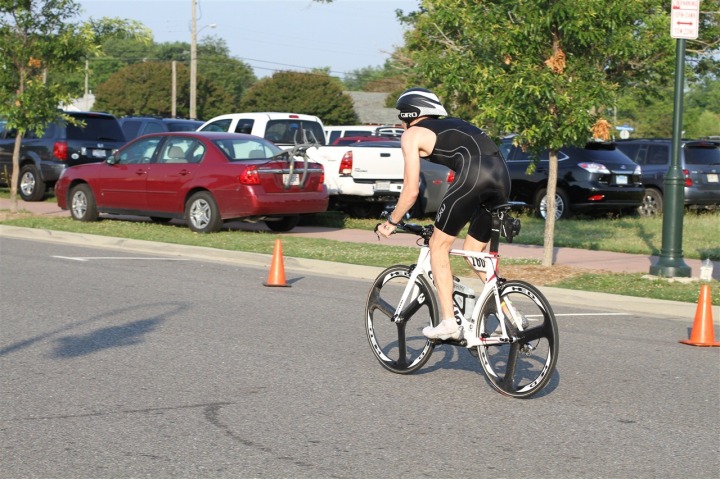 My mount onto the bike in T1 was quite efficient, and I was soon cooking and on my way.  I came out of the water about 15th or so overall, so I’d pretty much spend the rest of the race catching people – which is generally how my triathlons go.

The course is a pancake flat affair with about three turns in total…and also a two-looper.  In other words – it was a course designed for speed and aero.

On my outbound I start picking off the strong swimmers, but eventually with the small number of people ahead of you, you run out of people that you can track down quickly, and it becomes a very slow game of catch up.

During one of these pass attempts I nearly took out a flock of geese.  Which, while probably would have been funny later on in life, would not have been funny at the time, that would have made two race DNF’s in a row, one from getting hit by a car and one from getting hit by geese.  Anyway, I was making a pass on a guy, and just as I popped out behind him and around him I noticed about a dozen geese starting to waddle there way across the road, about 6 or so feet into the roadway already.  Luckily I was able to swerve before hitting them, as they would have made for a messy situation.  Plus, this would have made for my second bird-run-in.

After that, it was back to business as normal.  I hit the first turnaround and found I was a mile behind the leader – which assuming he came out of the water 1-2 minutes ahead of me, means he had put on about a minute on the bike thus far a quarter of the way into it.  That’s one of the advantages of out and back looped courses, you can quickly try and figure out if you’re gaining or losing ground.

This would be a good time to finally introduce my new bike – a Cervelo P3.  The old one was determined to be unfit for riding, so Cervelo swapped it out and I paid a small differential to go with the P3 versus the P2.  I also got new wheels, as you remember the other ones were pretty solidly cracked from the car.  I ended up choosing HED’s again primarily because it was easier to process as a one-for-one swap by the drivers insurance coverage.  Plus, I find them simple (no spokes).  Oh…and they look damn sweet on this bike. 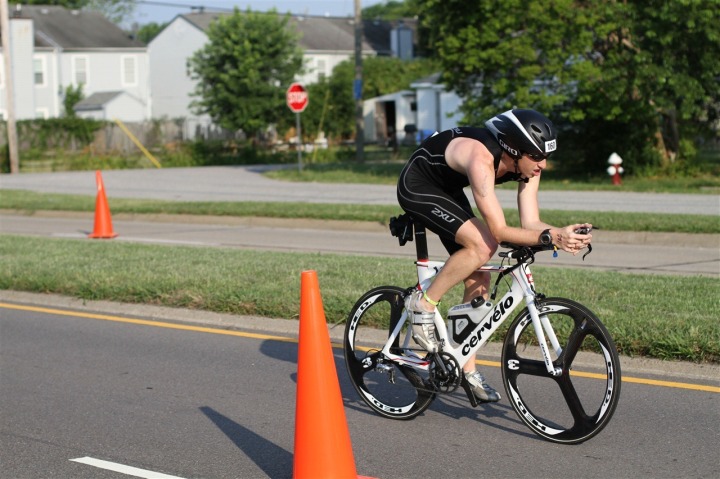 The second loop brought many many new people to dodge and weave from both the sprint and later international waves.  But, I will give folks credit in this race – almost everyone that I had to yell ‘on your left’ to, moved out of the way.  Which was nice.  This was especially good at some parts of the course where you could really get the speed up – like 26MPH on the flats – as a differential between 26MPH and a hybrid bike at 14MPH is pretty significant, and sucks when you have to slam on the brakes if someone doesn’t move. 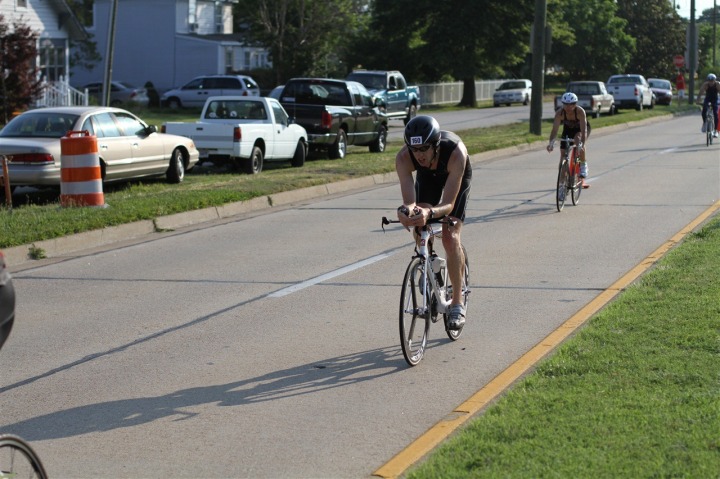 Anyway, soon I came back around towards the bike course finish.  Btw, you’ll notice the Timex Global Trainer on my wrist doesn’t look that big actually in this picture. 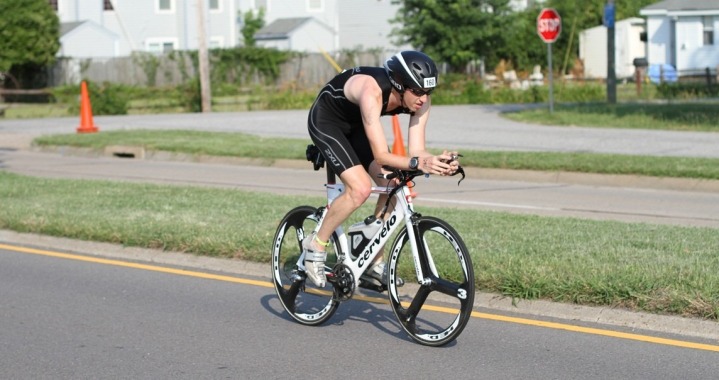 This course is a bit short – at only some 21-22 miles, so my time of 55 minutes isn’t terribly impressive.  In fact, in many ways for me on an Oly-type course averaging 22MPH is sorta disappointing.  But I think that will improve a fair bit over the next few weeks as I get back into a normal training routine.  Up until this point since the crash my training on the bike/run has been sorta stinted by an apparent fracture in my thigh from the car hitting me (I only found out last week).  Go figure. 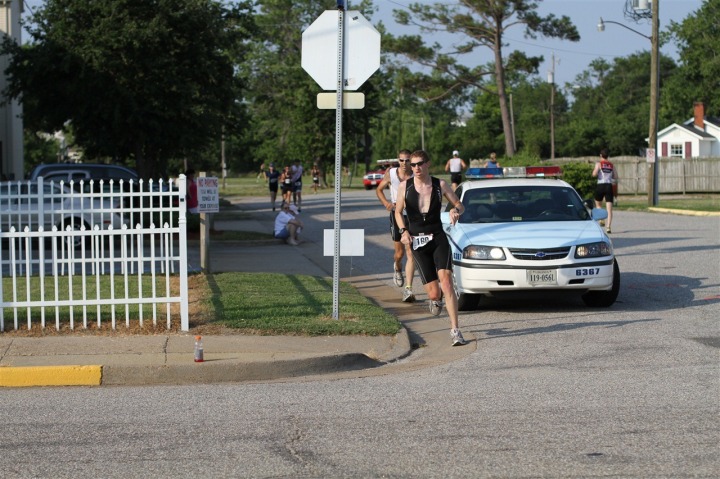 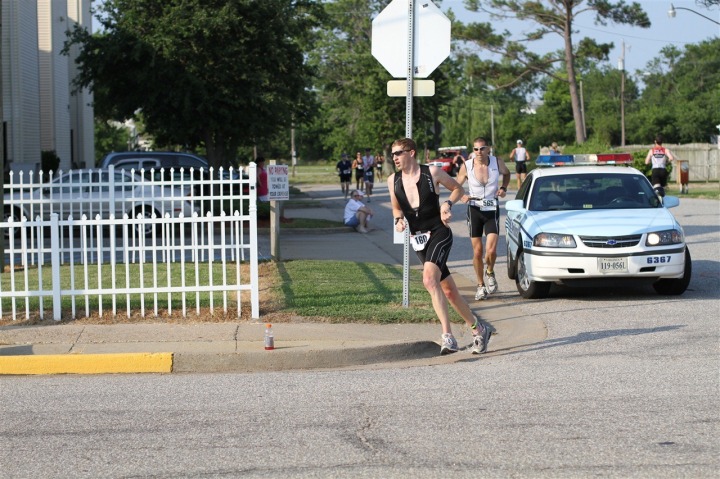 But in reality…the run was miserable for me.  I wondered if it was too soon to walk less than 100 yards out of T2.  I had a little issue on the bike, which carried over into the run: I couldn’t get any water/nutrition.  I had tweaked some things on my bike, which changed my position, which meant the straw connecting to the water bottle down on the frame could no longer reach my mouth.  I didn’t realize this until race morning.  This sucked…or rather didn’t.  So without that water, taking gel was kinda a non-starter.  Thus, a sucky run would ensue.

While my run time was quite slow for me – the slowest 10K time I’ve posted in a few years – it looks like it was actually pretty slow for everyone.  The winner ‘only’ posted a 39m 10K, which as far as winning Oly times go, isn’t super-fast on a normal day.  I suspect some of the heat and humidity played into it – as it was bakin’ out there.  One of the first true hot days this year.

Even in my ‘fastest’ section, the last half a mile or so towards the finish, I think little kids walking with ice cream cones on the boardwalk were still going faster than me.  It was ugly. 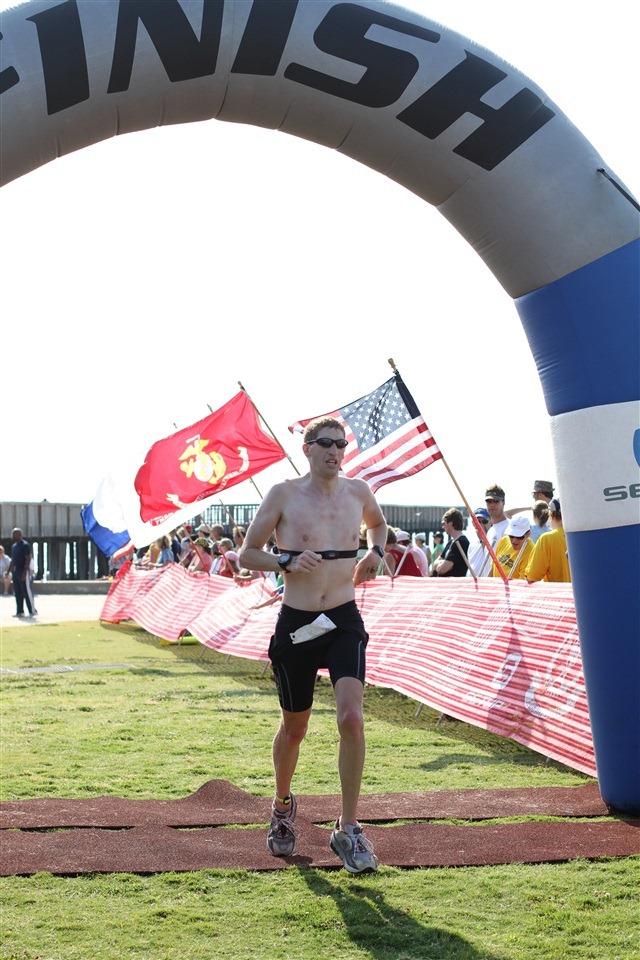 After the race – there was one priority: The ocean.  Given the race was right there, it made for a perfect place to cool off. 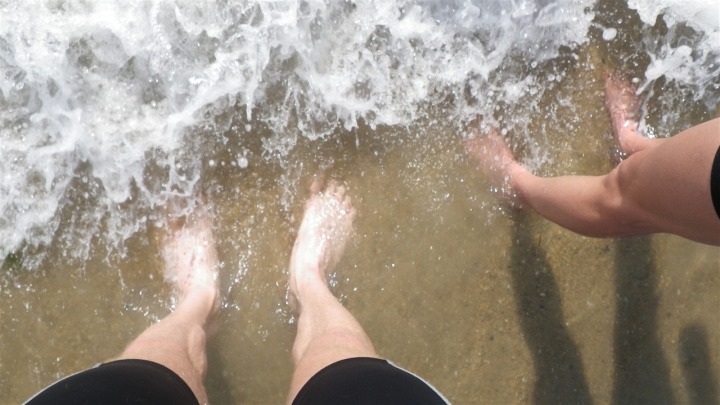 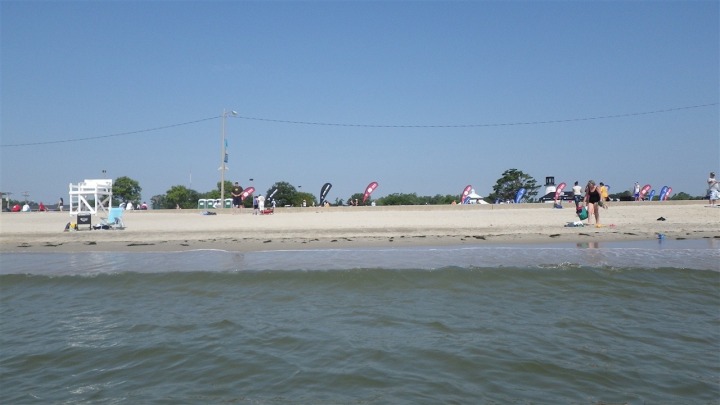 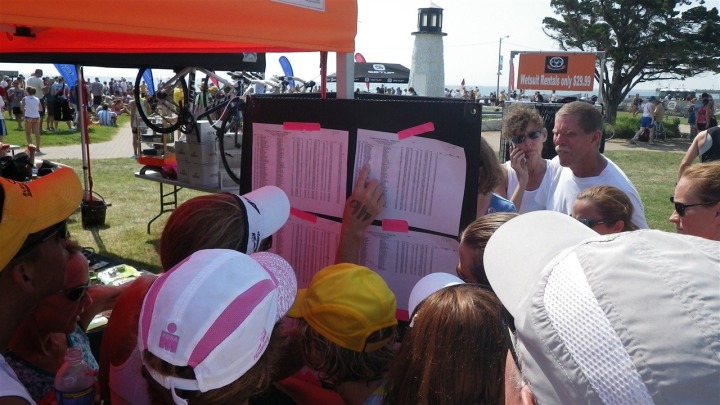 I managed to grab a 3rd place AG placing…while The Girl went out and kicked some serious ass – taking Top-3 overall.  Woot! 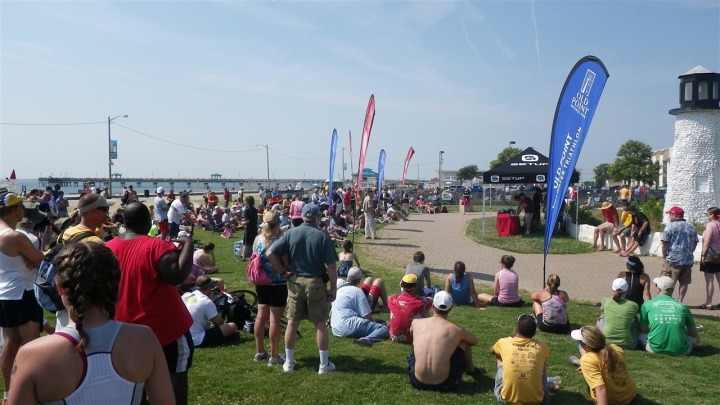 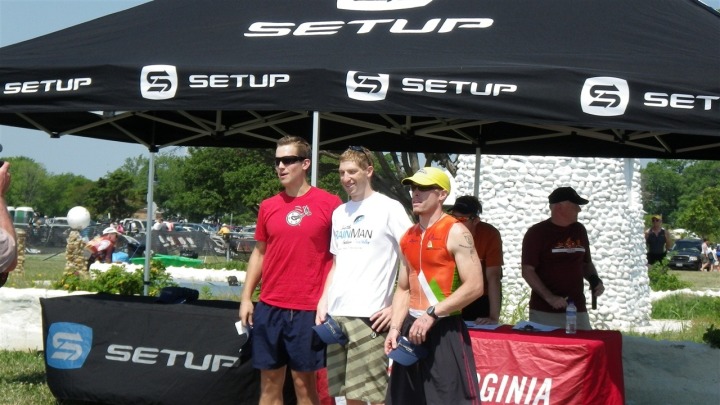 For our awards…we got visors: 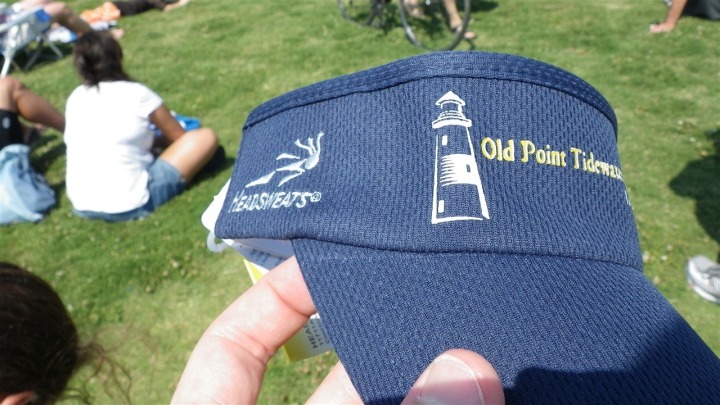 After awards I went ahead and got a picture with me and the new bike: 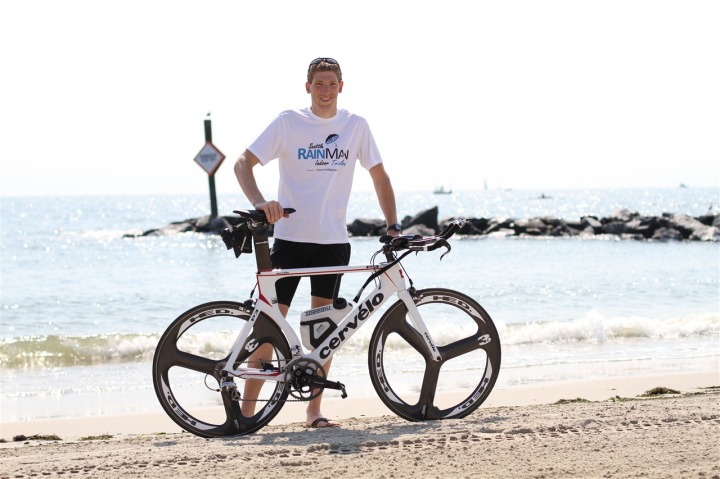 And then after the the beach photos (I know, not as exciting as a Sports Illustrated Swimsuit shoot) – we headed across the parking lot to a priority location: 7-11: 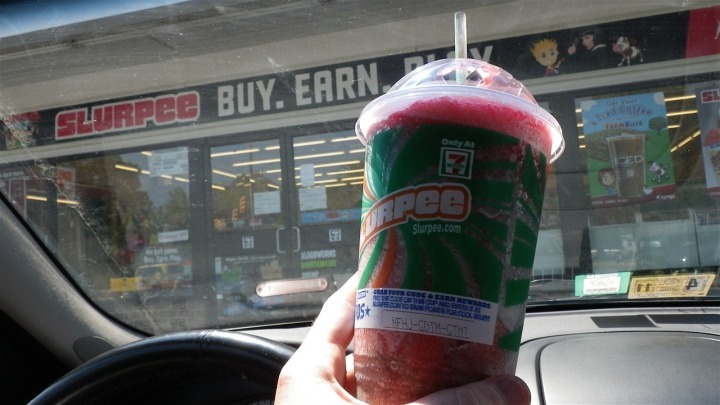 So with that, I’m looking forward to the NYC triathlon in about 5 weeks – that’s an ‘A’ race, and I’m hoping to get my running mojo back…especially now that I can pretty much resume running normally again.

Oh – and good to see everyone out there that said ‘Hi’ on Friday/Saturday.  Great seeing folks!