Ok…ok…I get it.  Ya’ll been hounding me for months now on what my race schedule is for next year – and finally, I can give you some answers.

As I hinted at in my last post on how 2009 went, my focus for 2010 is primarily shorter distance events (things taking less than 17 hours).  Basically my rule of thumb is – if it takes less time to fly to Europe than it does to complete the race, it’s no longer a short race. That’s not to say I might change my mind once late fall comes around – but even in that scenario, a longer distance running race would still fit in that category for me (because anything that’s not 140.6 miles is considered…short. ;)).

One of the challenges I’ve had with putting together this year’s race calendar as been my work travel schedule.  This year will be an extremely heavy travel year, with a dozen international trips, and countless domestic trips.  Further complicating matters is that the schedule changes just about as much as a magic eight ball on waterslide does – so planning training and racing around it has been difficult (I was supposed to be in West Africa this week for example, but that has been moved around a bit on the schedule).

In some ways though (not by accident), it works out best that my races are shorter distance.  As I’ve proven in the past, I can easily train while travelling.  The harder part is training for an Ironman while traveling – and while I have done that too, it’s the long rides that always get ya.  Bringing my bike with me on domestic trips isn’t terribly complex (I’ve done that too).  But bringing it on international trips with 3-4 countries per trip and highly questionable roads is far more complex.  So I’m limited to stationary bikes for the bike training, but I’m still able to run wherever I please in most cases.  On the water front, swimming is usually easy in the US, but more complicated overseas.

So with that, let’s get onto the action:

I’ll start off the year with an 8K running race in DC.  I had looked at possibly doing my first race this weekend (a 10K, Feb 15th), but ended up not doing it in lieu of some solid training.  So, by doing a race out in March, it’ll give me a chance to get some good training sets in between now and then.  I had also contemplated the National Half-Marathon, but that was vetoed by Sir Coach as being too long for the current training I’m targeting (meaning, too long to run really well, not too long to simply finish).

This will likely be my first triathlon of the year.  Part of me choose this race for its name, while the other reason is it’s a good local race to start the season off with.  It’s down in the same area I’ve raced in before, and while it’s 90 minutes away, I can probably get down there for some good training bricks in the weeks leading up to the event (if I’m in town).

But again, the primary goal here is a kick-ass t-shirt with the words “RumpASS in BumpASS” on it.

I’ve decided on the Rev3 Knoxville Olympic distance triathlon on May 9th.  I’m really looking forward to checking out the Rev3 triathlon series, as I think they have the potential given a few more years to really become a premier nation-wide racing series.  They’re attracting some top talent, so that’ll make it fun to watch as well.

After a fair bit of hemming and hawing, I’ve decided on the Tidewater race.  It’s fairly local, just about 3 hours south of here, so it won’t zap me energy wise to get there.  Plus, I have friends in the area which will make for a fun weekend.

For me, this will likely be my ‘A’ race of the year…well, at least mid-year.  Which sounds funny coming from last year to have an A race be an Olympic distance – but, it makes sense for me.  I’m entered in the Elite Age Group wave, which means that aside from Simon Whitfield in the wave ahead of me – it’s all about just going balls to the wall.  Anyone I see that’s in front of me, is ahead of me in the results.  And anyone behind me, I’m beating.  Finally – simple and raw racing.  It should be a blast…well, except for the 5:50AM start time. 🙂

I have some friends up in St. John’s, Newfoundland (Not sure where this is? Just go north for a few thousand kilometers until the land finally stops. I think you can almost see Greenland from there…) – so I’m going to make the trek up there and visit them, and then attempt to throw down at their race.  The race is a slightly modified Oly – with a shorter swim, and a slightly longer bike and run.  Based on the results from last year, I believe I’ll be the only American there.  Should be a blast!

Continuing the Canadian theme, I’ll be doing this race on Montreal – which should also be awesome.  It’s a criterium course staged on both the Formula 1 race course, and the 1976 Olympic Rowing Venue – kinda like two amazing places for the price of one.

It’s a non-drafting event, but with the criterium style (loops), it should make for a fun time. I’ll be doing the Olympic distance race, but there are some folks out there doing the Iron-distance version on the same course.  What’s 41 bike laps between friends? 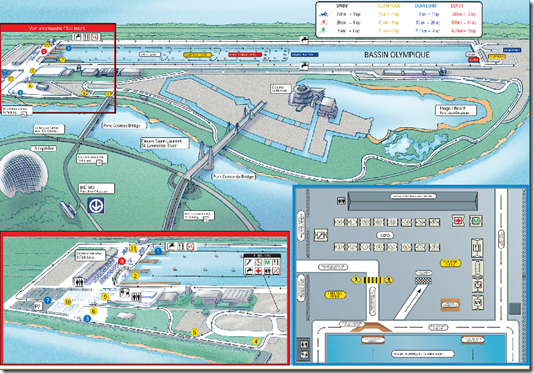 As for the rest of the fall, there’s a ton of options, some running – some triathlon related..maybe even a bike road race.  I suspect I’ll do a bunch of shorter distance sprint or oly races, pretty much just racing based on my base from weekend to weekend, having fun at it.  Once the water gets too cold, I’ll swap over into running races, and maybe pushing out the distance a bit.  The Philly Half-Marathon is very appealing to me.  But I want to stay flexible on that front…

So by now what you’ve probably is that there are no huge A races, nor any super-specific race schedule.  I’m not building an entire year of training to just one or two races.  Instead, I’m flexible in my race plans, and focusing on distances I should enjoy quite a bit more.

I don’t have any specific time or qualification goals this year.  That doesn’t mean I’m going to slack off.  Nope, quite the opposite.  It means I’m simply going to go all out at races (per that given race plan anyway).  And the clock will be what it’ll be.  I’m not going to put any specific pressure (time to hit) in my mind, as I’ve found that I really do better in races when I’m just out having a blast and throwing it all to the wind.  So that’s what I’m going to do.