I was going to post about all sorts of things this weekend, from the way-too-hot run, to swimming to making homemade pizzas at home.  But…then my new bike came in.  And all that went out the window!

After my other bike was whacked by a car back a month ago during the Rev3 triathlon, it was determined that the frame needed to be swapped out (along with the wheels).  The whole process is pretty straight forward, but it can just take a bit of time between waiting for the drivers insurance company to sort things out and getting the go-ahead.

So during this time you may have seen glimpses of a different bike over the past few weeks.  That’s actually been a loaner, albeit in the same size and general model as the replacement bike.  On Saturday I went over to Bonzai and picked up the new one – here’s a crappy cell phone pic: 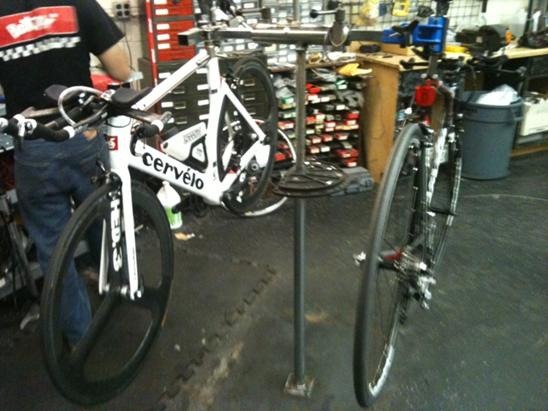 Now, I was going to get some really nice pretty shots of the bike after I finished my long ride on Sunday.  I even brought my DSLR camera and tripod out and had planned some cool shots using a remote timer system.  But…when you see what the bike looked like after I was done with the ride…I decided against it.

We got down to Prince William Forest National Park a bit later than planned but quickly got the bikes all set up.  I contemplating adding a pink horn to it, but figured that might be a bit over the top. 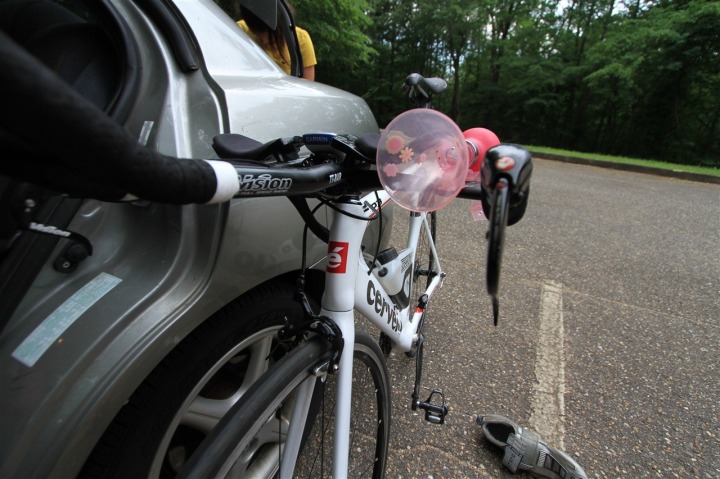 Around this time I got a text and e-mail from the City notifying me of an impending tornado warning/watch.  Given I was 20 miles south, I ignored it.

PFNP is a great place to ride because it’s fully off on a protected area that allows you to do endless loops and out and backs with virtually no cars to tango with. 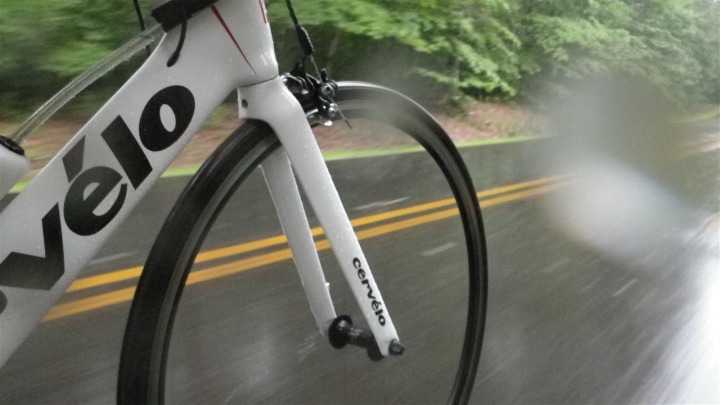 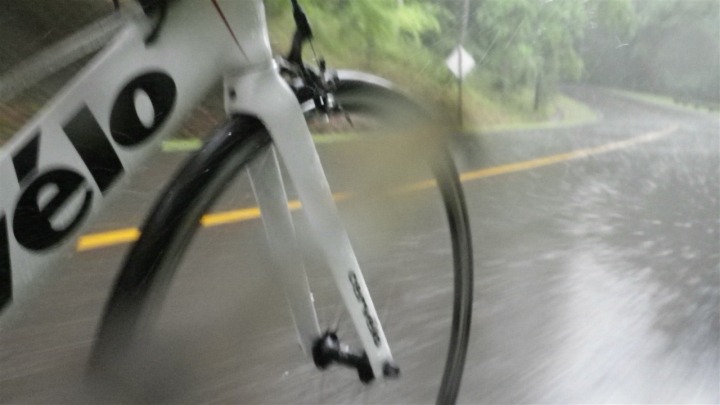 I understand that pictures don’t always tell the whole story.  So perhaps a bit of video showing what it looked and sounded like would help:

A lovely ride in the rain.

(In case your curious, I had to temporarily use a blue Camelbak connector on the Speedfil, which is what you see there near the aerobars, need to find a replacement one…)

Occasionally it would stop for a bit…and then it would start again.  Here’s a brief intermission without the rain.  You can see though all the road crap is starting to collect on the inside of the fork (compared with the pictures above). 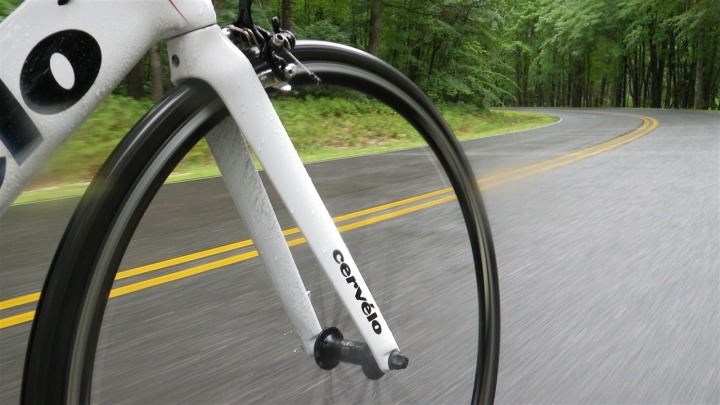 The ride was about 55 miles, finishing with a 10 mile time trial.  Due to having a slightly different workout it ended up that at one point I was chasing down the girl.  Kinda fun – I have her in my sights! 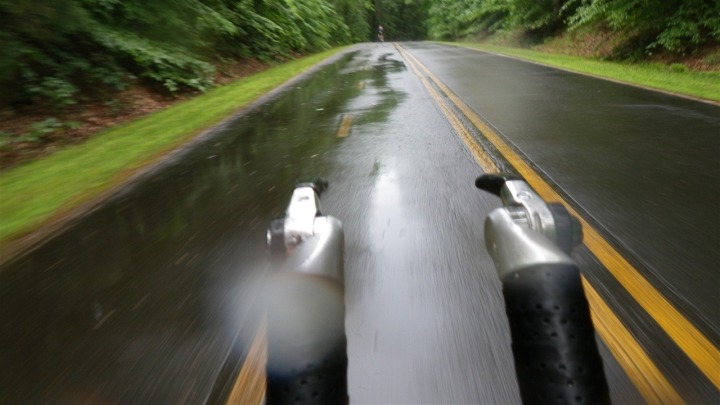 I knocked out a very solid time trial (in fact, ignoring the time trial, the whole ride itself was very nice at an averaged power of some 243w for a Z2 effort). Pretty happy with that.  After the TT, it was time to examine the state of the bike: 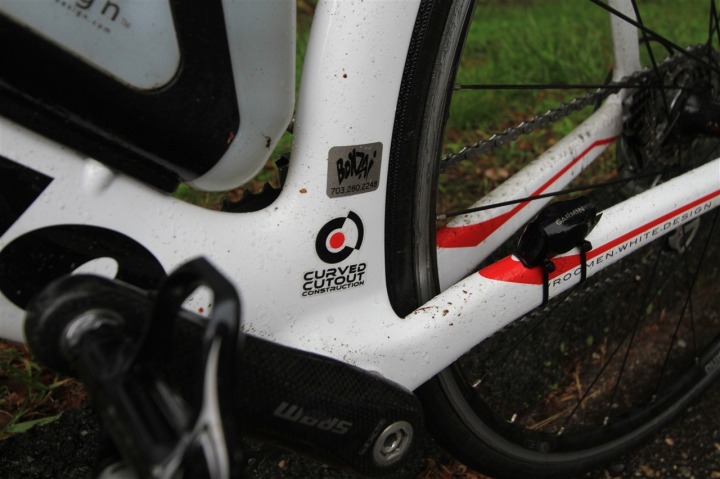 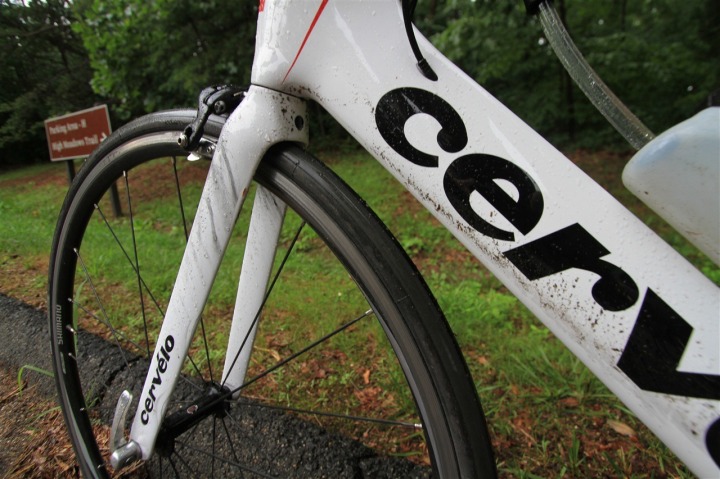 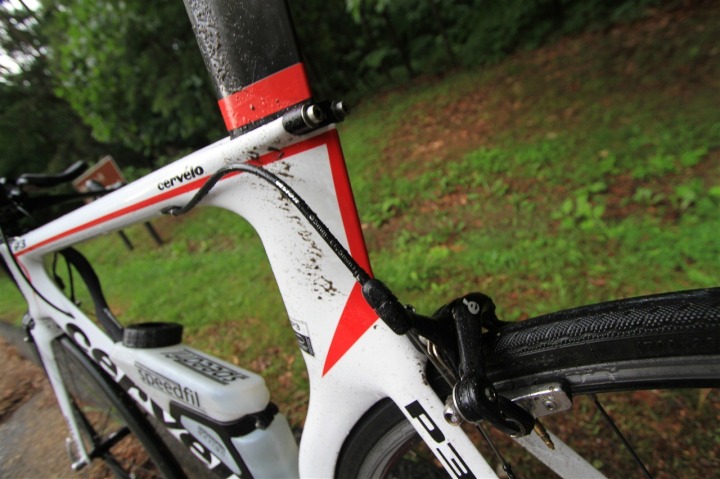 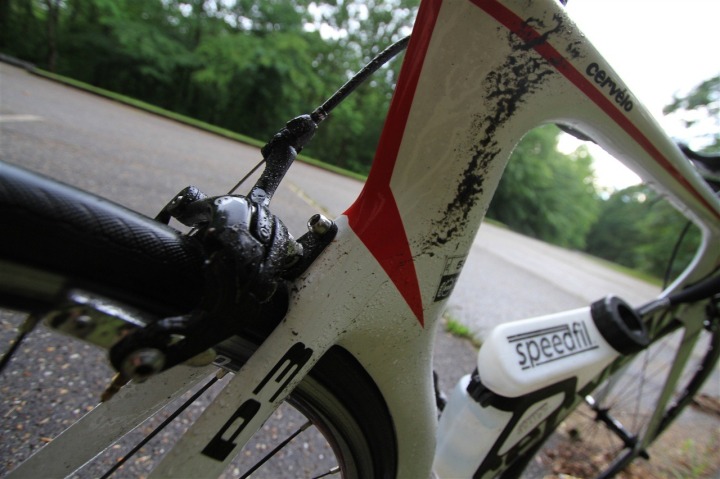 I also noticed that somehow along the way I managed to snap off the Garmin speed sensor.  Whacky.  That would explain why I was seeing such strange speed numbers.  See, the Garmin devices will actually show your instantaneous speed using the sensor and NOT using the GPS.  The GPS data is then utilized ‘after the fact’, as well as for current distance calculations.  The reason for this is to show accurate speed numbers in cases where GPS data may be sketchy (i.e. mountain biking). 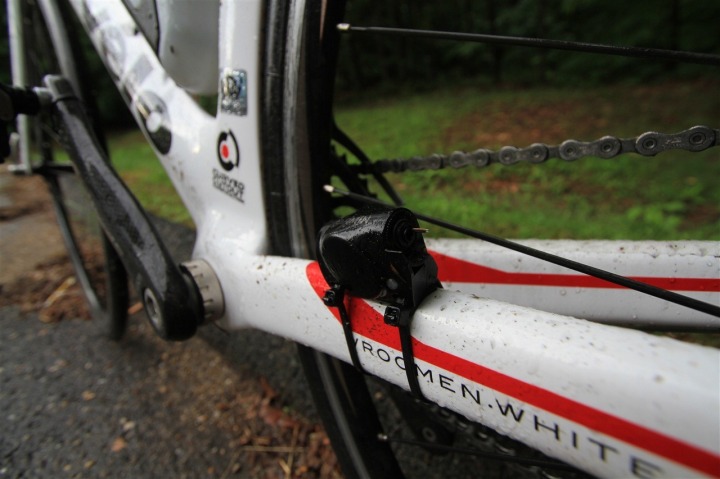 Of course, no sooner did I get back to the car, than did the sun come out.  Go figure. 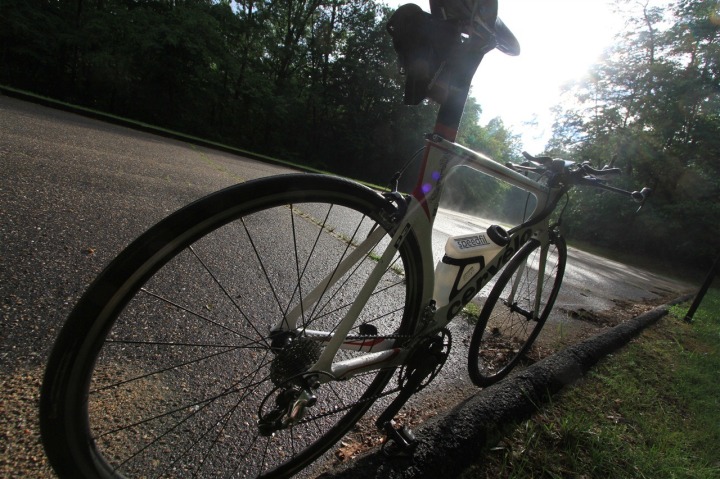 And then blue skies: 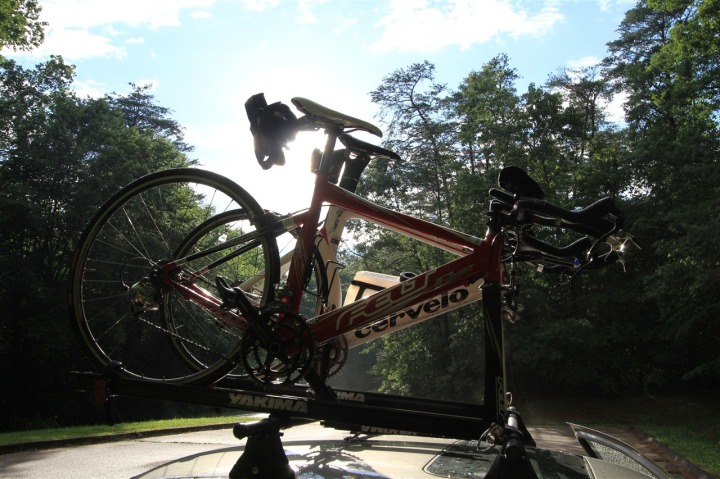 After getting home, I did the only logical thing.  Kept the bikes on top of the car and started the washing process. 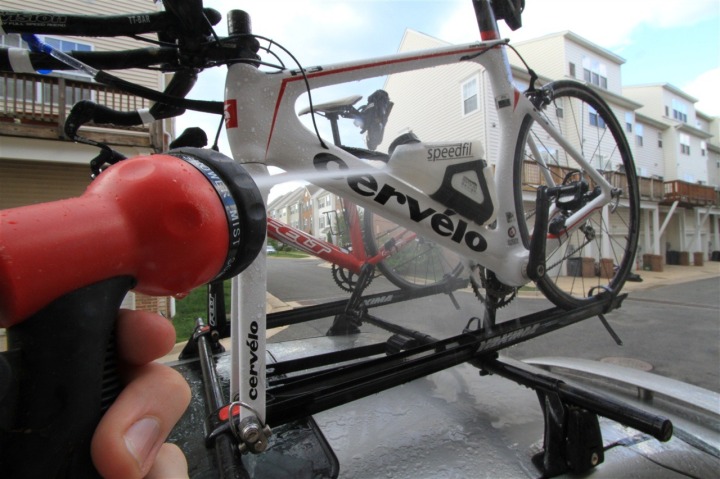 From there I then went into full scale cleaning mode with a bunch of rags. 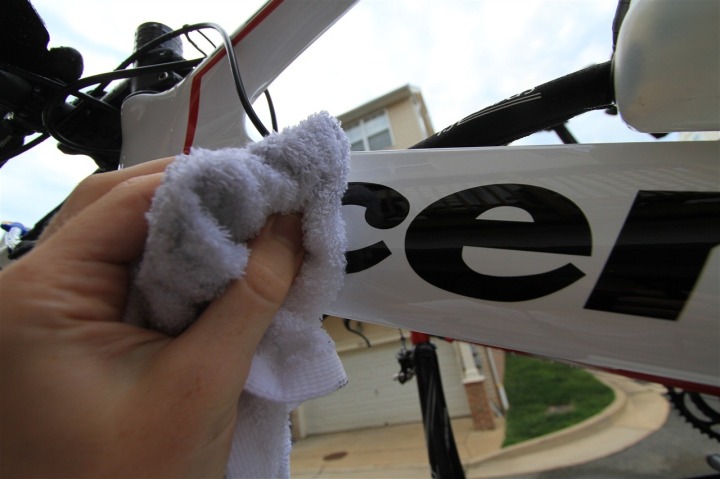 Eventually ended up on the bike stand with wheels removed to get in between all the little nooks and crannies. 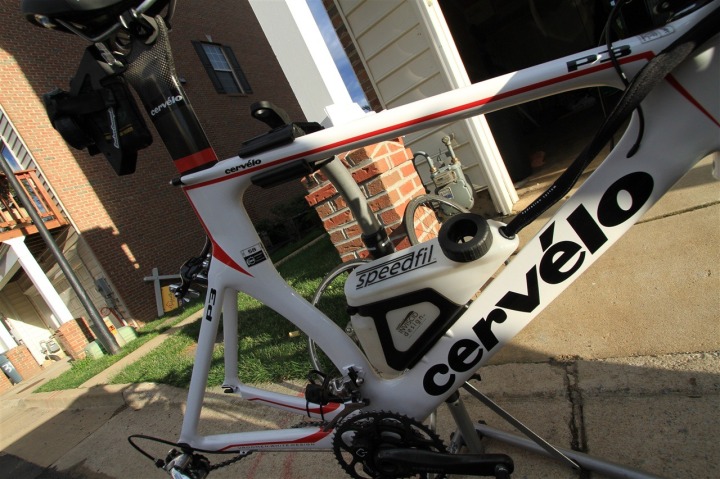 Of course, by time I finished all thins cleaning making it look sparkly again – it was time to eat.  And food led to darkness outside.  So perhaps some nice pretty pictures will make their way out later this week!  Hope your weekend went well!

Quick side note: I should have the Timex GPS Global Trainer in my hands by Tuesday and will post a First Looks type review sometime this week, prior to a full in depth review in the near future.