With the past week as busy as it was travel-wise, I really had no idea what exactly to expect when it came time actually throw-down at Saturday’s race.  Luckily, the distance was a sprint – otherwise I suspect the week’s exhaustion would have probably been a larger factor if the race was longer.

The primary reason I was out in Seattle was my 10-year high school reunion, and after a bit of research, it turned out there was a fun sprint triathlon out there the same weekend.  As I’ve mentioned in the past, I was born and raised in Seattle – so I was pretty excited to get back home and race…even if it would be in typical Seattle rainy weather.  Plus, The Girl would be joining me as well on the the trip, including racing.

So with that all that out of way, I was all set and ready to roll on Saturday morning when I arrived at the race site. 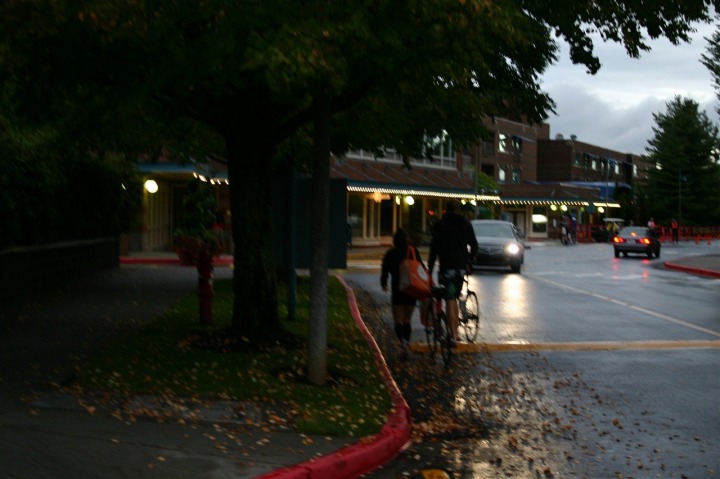 We had done packet pickup the day prior, so all we had to do was hit up the bathroom and then setup in transition.  Err…perhaps I should say setup in the mud pit. 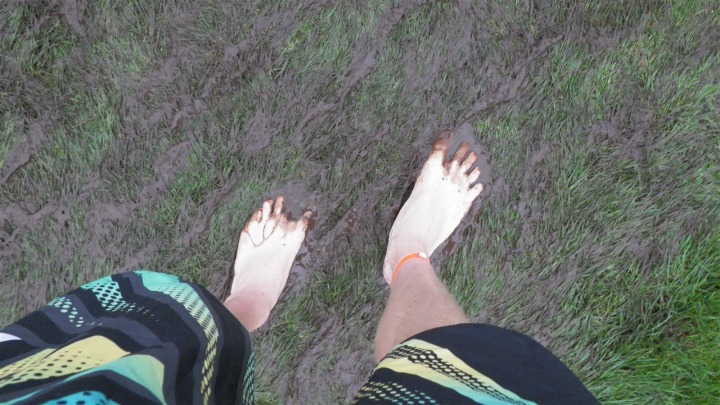 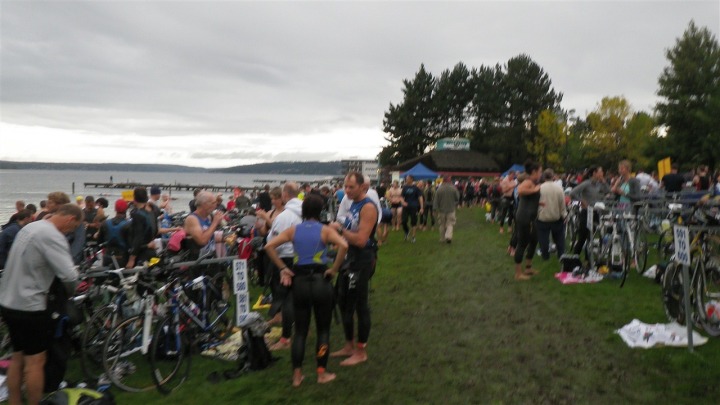 Due to the rains, the place was pretty soaked – and in some areas, turned into giant mud pits.  Though some of the Elite folks were up on drier land, I wasn’t in the Elite Wave (didn’t know about it actually) – so I was hanging out in the mud flats.   Luckily, since I didn’t want to get my transition bag caked in mud in the middle of a two week 7-state trip – I just used some re-usable bags they gave out at packet pickup. 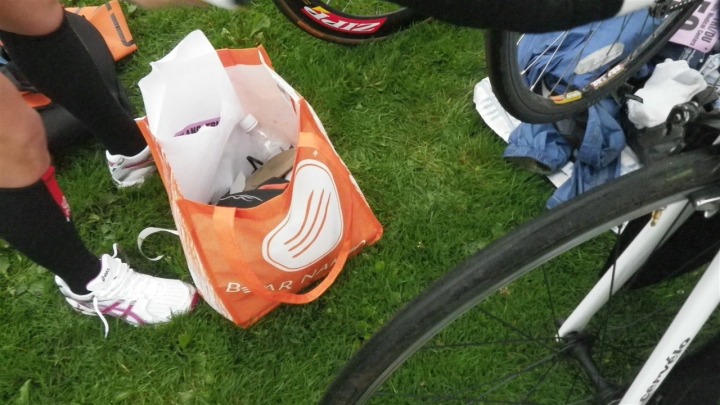 After a few minutes, I was all set and ready to roll.  You’ll notice I didn’t actually put my shoes on my bike like I usually do.  With the mud I’d have to cross – I didn’t want to end up with massive amounts of mud inside my shoes later on for either the bike or run (primarily the run).  So I just put them on in transition.  Plus, with the rain the flying mount became more dangerous and frankly wasn’t worth the few seconds shaved compared to the risk.  So…shoes to the side. 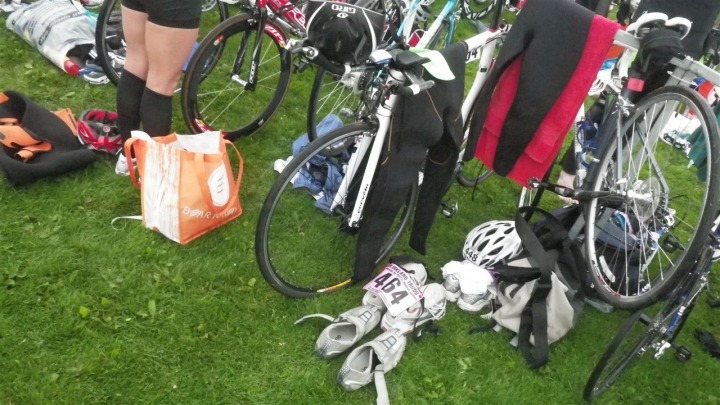 With all that set, we went out for a bit of a swim.  While we had wanted to get in a short trainer bike and then swim – the logistics turned out to make that fairly difficult.  So simple swim it was.

Once that was done, there was pretty much only one thing left to do…start.

My swim was wave about 25 minutes after the Elite wave went off.  Once the in prior to mine left, we were allowed into the water to get acclimated.  Like normal, I spent as much time as I could either with my face in the water getting used to the colder temps – or doing a few brief little sprints off to the side to stay warm. 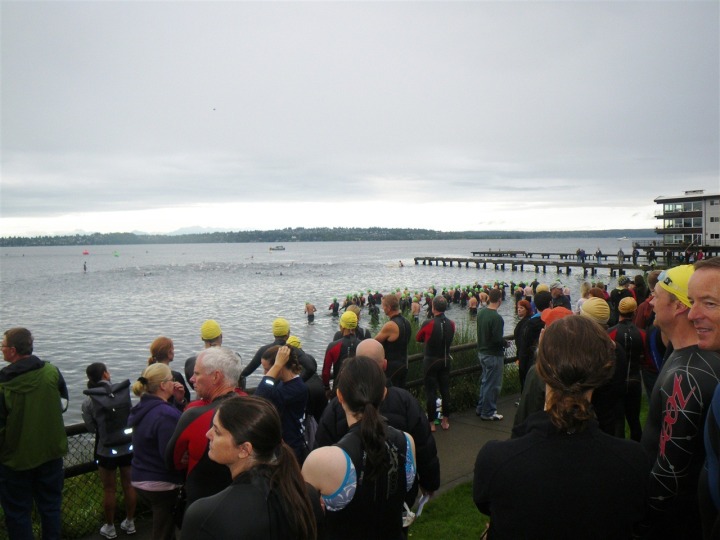 I positioned myself on the front edge with the most direct route to the buoy and prepared for the horn. 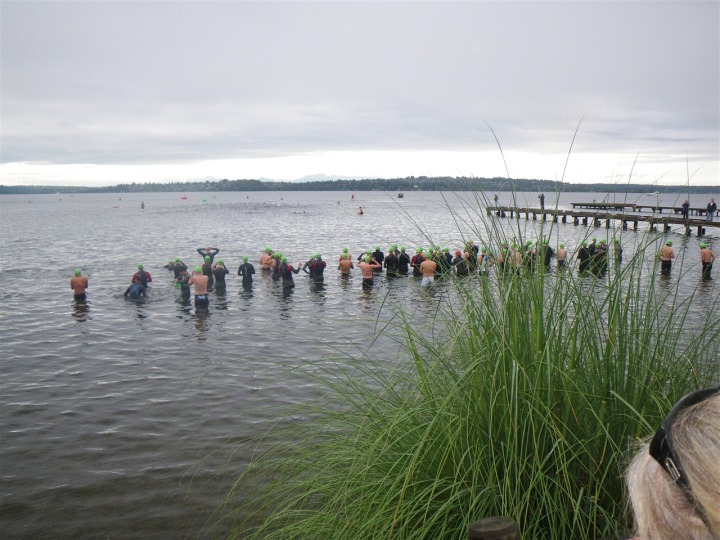 Once we started I was able to mostly stay in one of the front swim packs.  As normal, there were a few swimmer folks (especially common in M29 & Under waves) that would blow folks out of the water…but 99% of the time you catch them about 2 miles into the bike.  No different here.

I was pretty happy with my swim overall – though it was probably a hair bit slower than it could have been.  But I know I swam a really good line – so was at least happy there.  This was pretty much the first time this year I wasn’t in the first wave.  So I got to once again partake in quite a bit of passing while in the water.  The wave directly in front of mine was both larger, but also a bit slower on average than the M29&U wave. 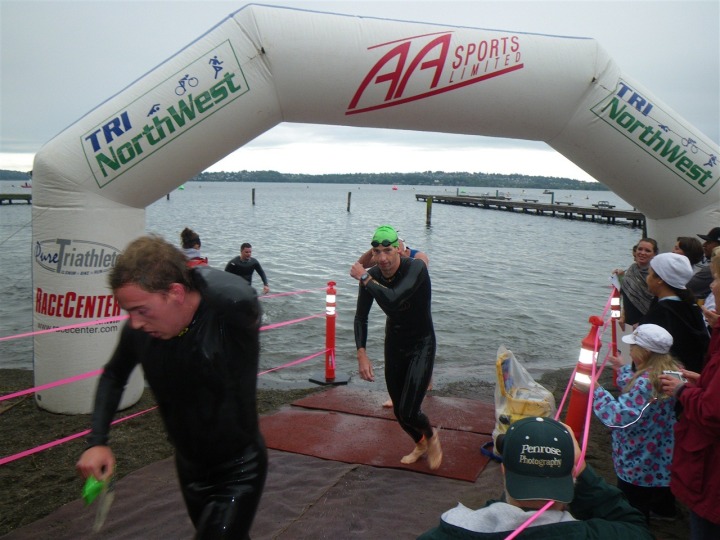 That said, I surfaced out of the water in 12 minutes.

T1 was pretty short distance-wise, and I was happy to not fall anywhere on the mud or wet concrete.  Though, I did expend more time than I wanted to trying to get my aero helmet on.

I got up to speed fairly quickly – and also got a shout-out from a co-worker on what place I was in leaving the water (5th in AG).  This was pretty helpful in figuring out exactly where I stood. 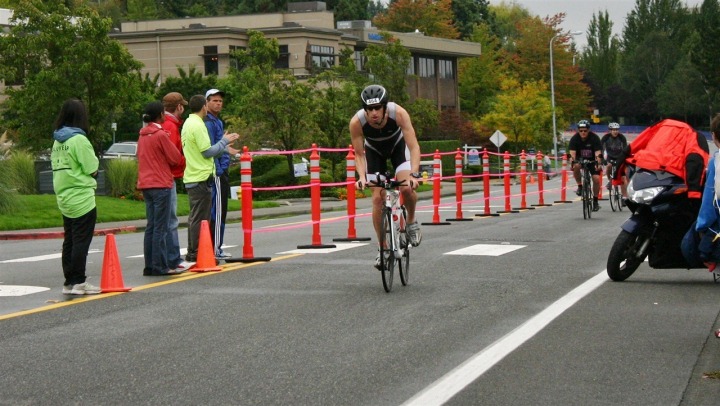 Oh, you may be wondering where my race wheels are.  After arriving in Seattle I found one wheel had the tire popped, and the other was showing a weird tube bulge.  I tried swapping them both out, but the bulge re-appeared.  I believe some of the tires I was trying to use just aren’t compatible with the HED3 wheels – so I’ll need to pick up new ones before next weekend’s race.

From there I had a brief bit of time on rolling flats to try and track down a few folks before hitting the hills.  This section was fairly fast for me at an averaged pace 25MPH.  Though I was still fairly cautious given the slick roads and occasional rain showers I’d race in and out of.

Speaking of the hills – there’s a lot of them on this course.  It’s a highly technical course, so you really have to focus.  Meaning, those who know the terrain and can descend/climb/corner well can make up a good amount of time.  And, adding the rain/wet roads – those who have bigger balls can also make up even more time.

Oh – as for the elevation graph:

In short, pretty much no flats.

Per my race plan, I pushed the climbs – as that’s where you can make up the most time.  But I was a bit more cautious on the descents than I would normally be.  Mostly because I just didn’t know the road quality well enough and with the wet roads I didn’t want to guess wrong at the game of “Pot Hole or Puddle”.  If you guess puddle and it’s actually a pot hole…the bad news bears come out.

I did probably push a few of the hills a bit too much though – as you can see from my mean max distribution, some of the pushes were a bit over FTP for too long (i.e. 447w sustained for 30s).  The bottom purple line from Training Peaks shows this particular race, while the upper one is ‘bests’ from the past 6 months. 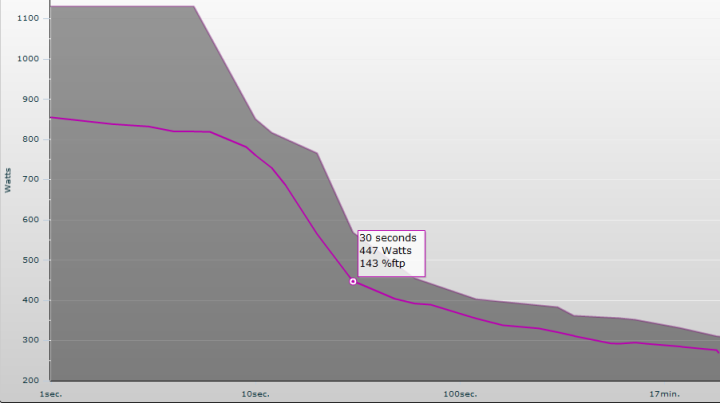 I ended up passing a ton of folks though, and nobody passed me.  That said, you’d think I went kinda slow with the average just over 20MPH (for a sprint).  In reality, with the course elevation the way it was – that was mostly in the mix for some of the faster bike splits. 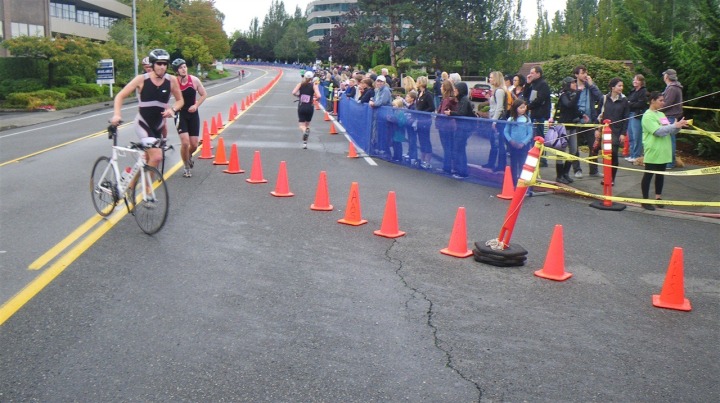 I came off the bike and into the muddy transition area and made a fairly good T2.

As I was racking my bike, I noticed the only competitor left ahead of me in my AG just leaving transition.  I had been following him for quite a while on the bike, just a few hundred yards back – but he was descending much better than I was.  So I was really really really hoping that he wasn’t a runner.

But I was slowly making ground on him.

I left transition and immediately got to speed.  Without a doubt, I enjoy the sprint triathlon’s the best.  And of that, I enjoy the run the most.  I just have a blast running almost as hard as I can for 5K. 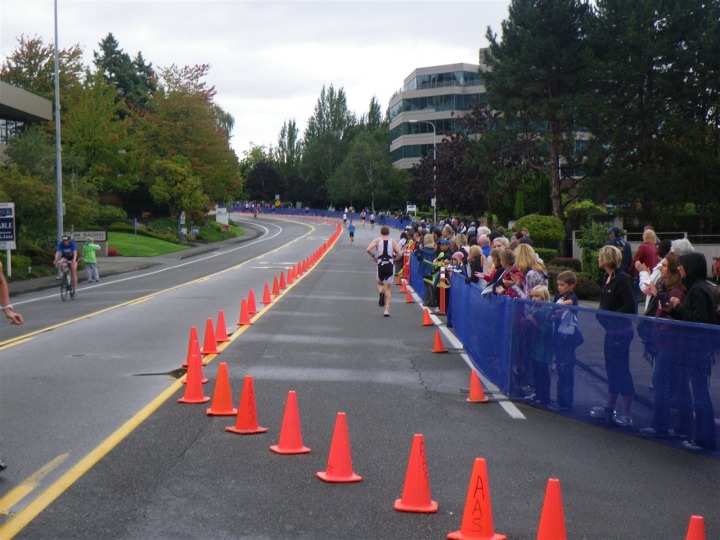 I was slowly closing the gap on him and relatively confident I could do it before the finish line.  I felt strong and was bounding along quite nicely.

Approaching the turnaround, we made a quick detour into a parking lot loop they had setup.  It’s sorta hard to describe, but here’s the map: 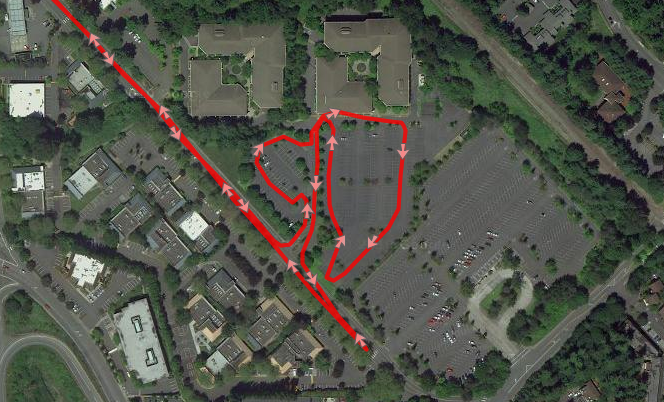 It was in that little loop that while making one of the many 90* turns that I decided to kiss the ground…quite literally.  I simply went to turn and both my feet slid out from under me and I face planted right onto the pavement.  Luckily, my knee and elbow took the brunt of the fall – so by time my face hit it was more of a bounce than a skid.  It looked something like this: 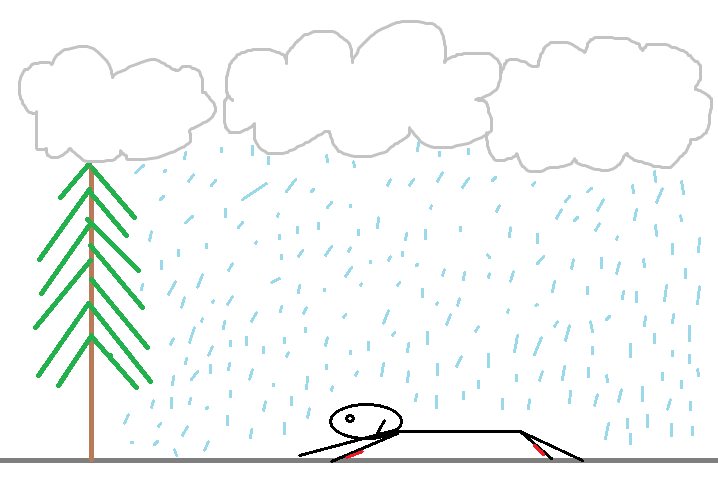 (I don’t think at that exact moment it was raining, but I decided my picture looked sorta plain without the rain – so while it rained before and after, the pavement was still very slick.)

On the bright side – the resulting carnage looked pretty damn cool: 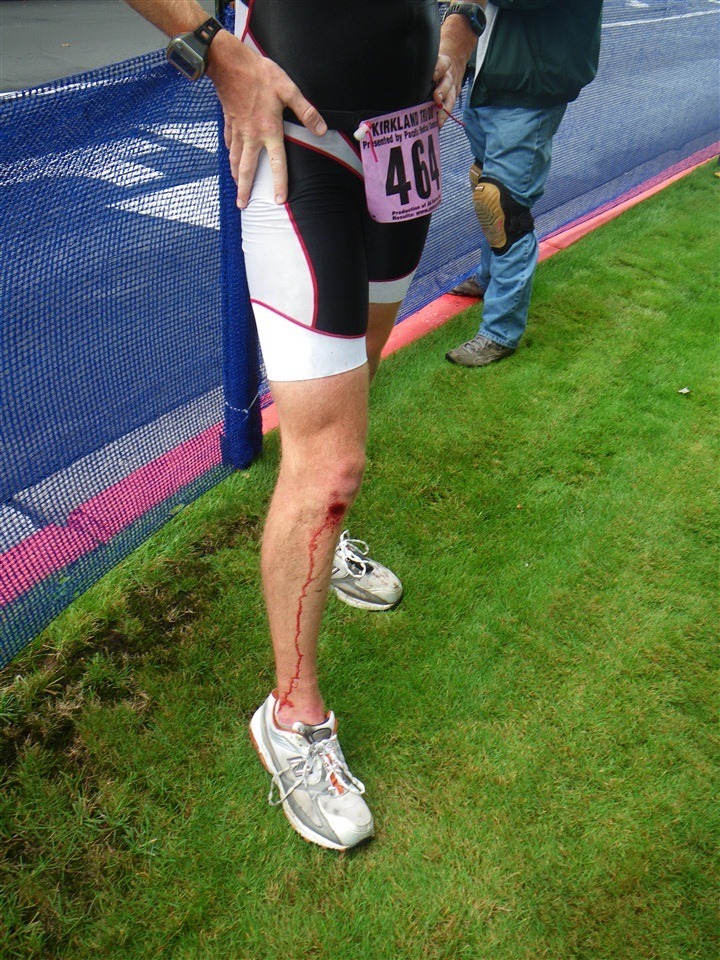 I was up and running again within a few seconds, but took a few more seconds to get the hang of things.  As I exited the parking lot circus, and the final hundred yards until the turnaround, I made eye contact with the guy in front of me.  We both then made leg-number eye contact as well.  That immediately meant: Game on.  And both of us knew it.

Both of us picked up the pace…which for the next few minutes would average 5:36/mile before slowing towards around a 5:45 pace before picking back up and heading into the 5:20’s for the final 90 seconds or so. 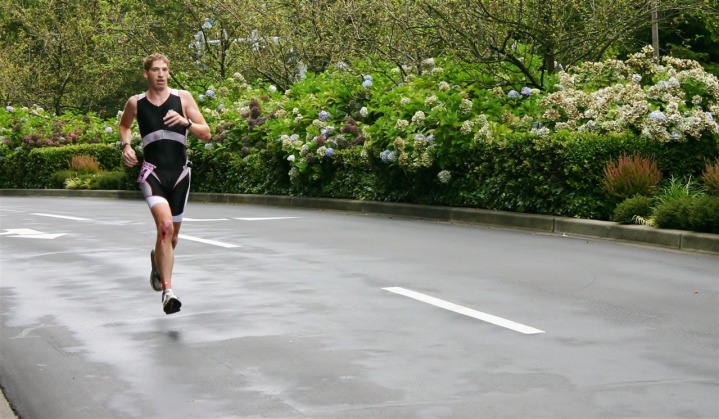 But…at the end of the day the gap was just too much to close, and I ended up in 2nd place in my AG and a final run time of 17:55…though I suspect the course just a tiny bit short. 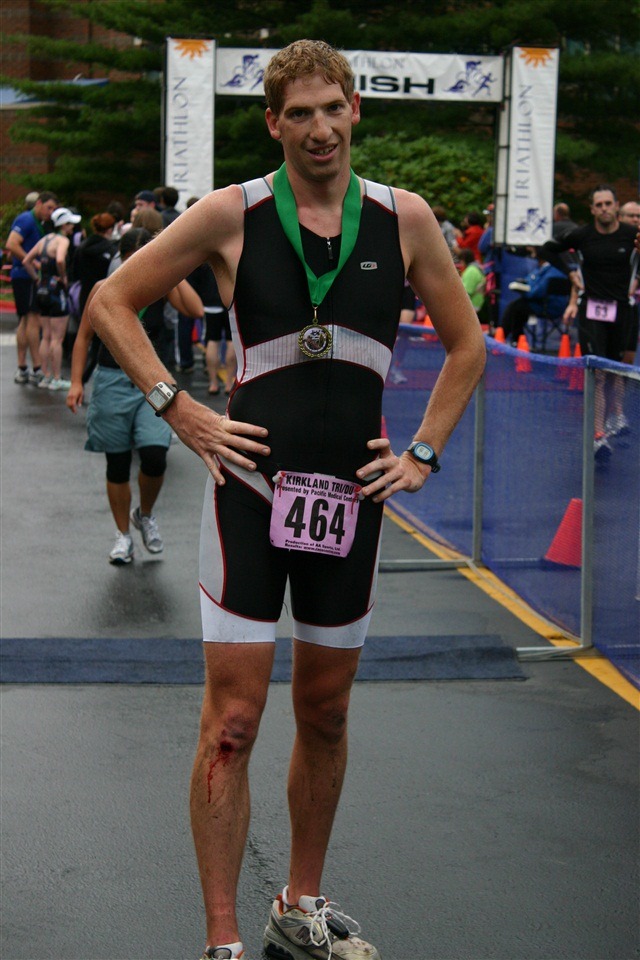 On the bright side…my leg wound was looking cooler and cooler by the minute – with the blood continuing to stream down and pool near my socks.  It was awesome. 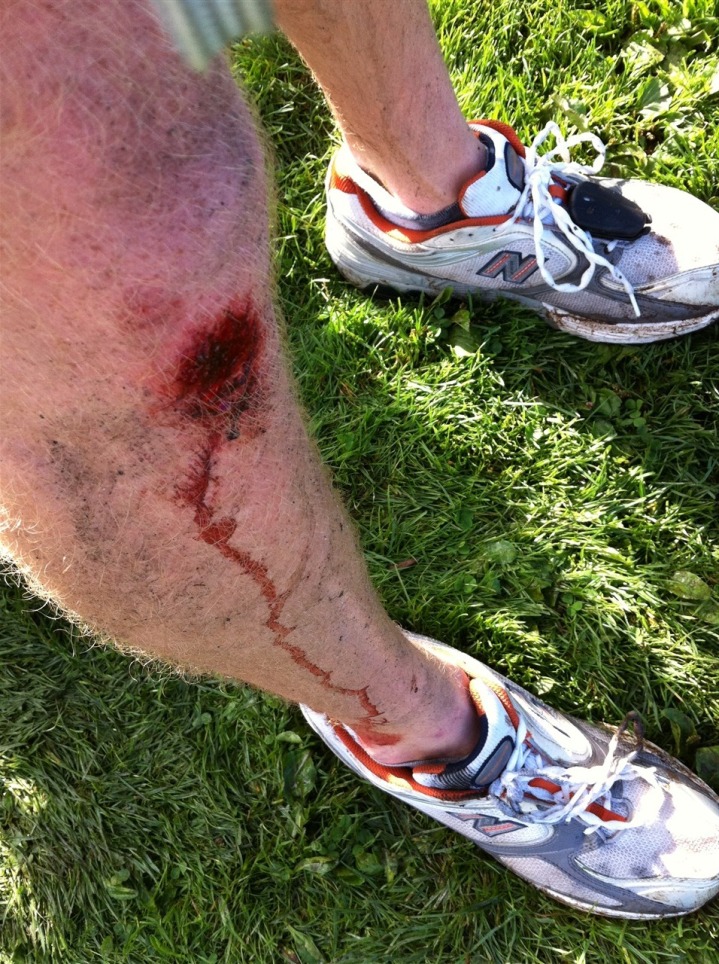 A few minutes later The Girl would fly into the finish for the fastest women’s run split of the day.  Pretty solid – especially considering she’s been dying coughing and shooting snot rockets 24×7 the last few days.  She took the AG win, and 4th female overall.

Later on we’d both go up and collect our little medals.  Here we are with my parents, who came out to cheer both of us and take all the pictures you’ve seen in this post.  They’re awesome! 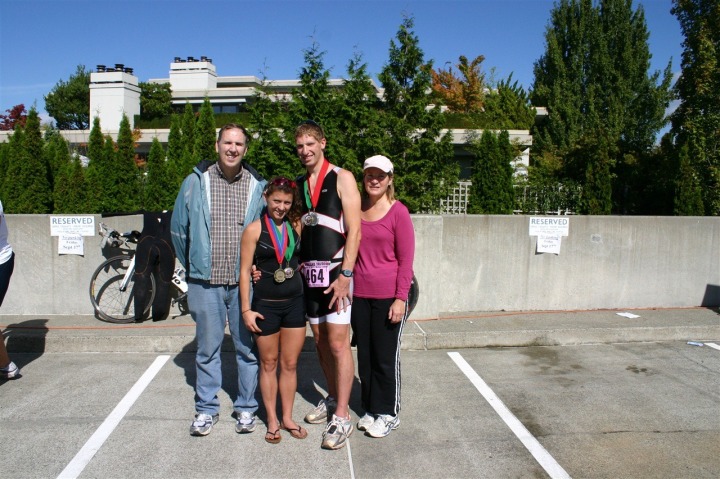 Oh – and we got to enjoy some of the great food they had.  Sure, they had all the usual’s: 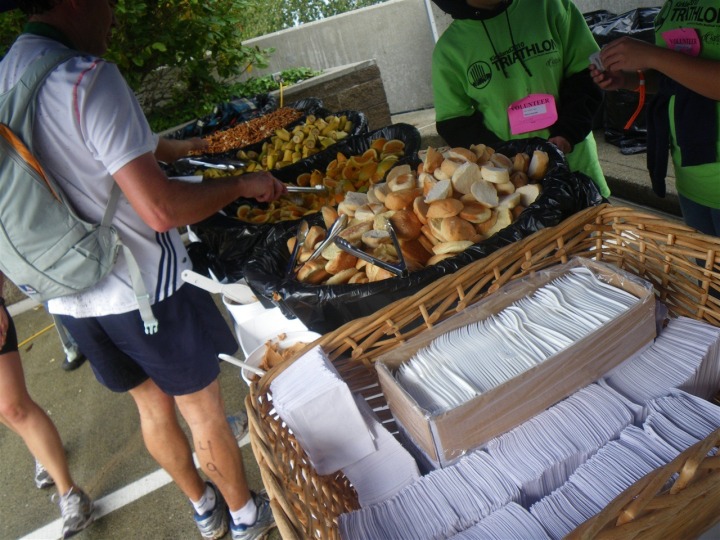 But they also had strawberry shortcake…with whipped cream!  Brilliant! 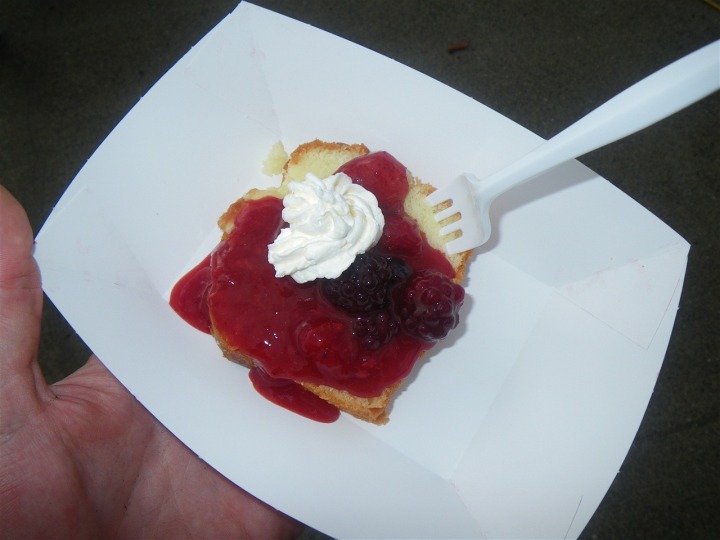 If you have a chance to do the Kirkland Tri – definitely go out and enjoy it.  It’s a fun race that I’d absolutely do again if I had the chance.  The bike while challenging is fun, and the run is a blast with rolling terrain to keep you moving quickly.  Plus…sometimes the sun does come out in Seattle…even if it happens to be after the race is over: 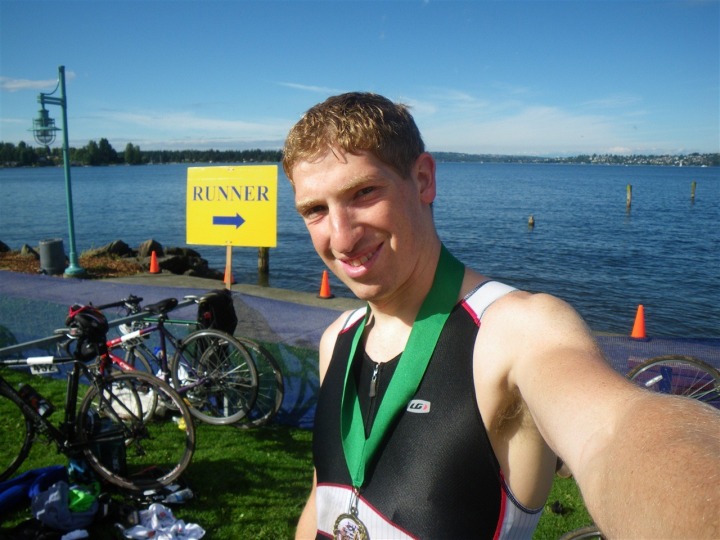