A gadget packed weekend is in the books!  Here’s what I was up to. 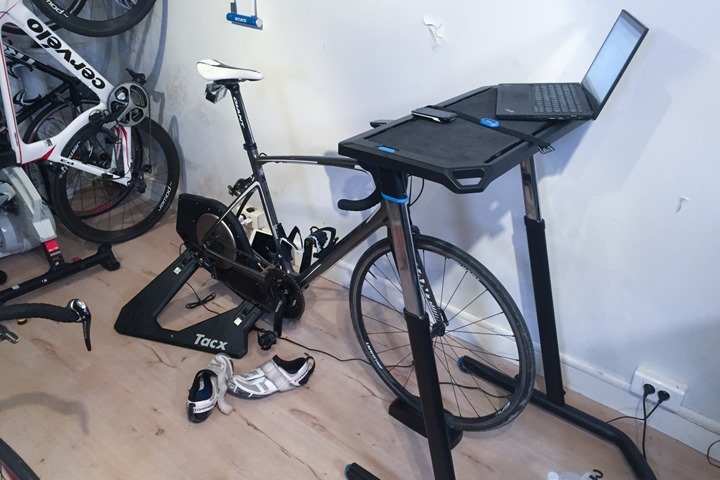 I kicked off the weekend with a bit under an hour on the trainer.  Nothing fancy, no apps or other complexity.  Just an ERG workout.  I was using the Edge 1000 to control the Tacx NEO via FE-C, simply setting the resistance levels manually.  It’s nice that Garmin fixed this back a few months ago (after months of being broken).  But I can’t help but continue to think that the way Wahoo does the trainer control mode is just so much better in terms of easily being able to increase/decrease wattage without going through a bunch of menus. Unfortunately, Wahoo still doesn’t support FE-C trainer (despite saying they would by last fall).  So that’s a non-starter here. 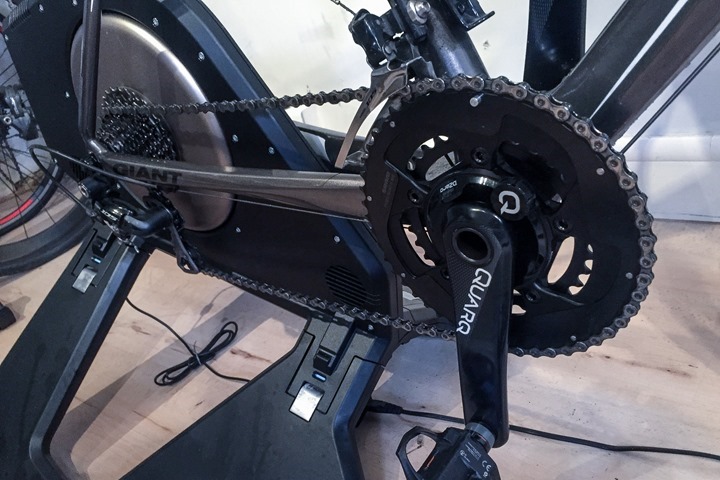 From a power meter standpoint, I was testing the Quarq DZero unit, which also had a pair of PowerTap P1’s attached to them.  And of course, the Tacx Neo too.  So really only three power meters on this setup.  I might add in a left-only unit like a Stages or 4iiii, but honestly it wouldn’t really add a whole lot because being left-only the data would be slightly skewed.

The only downside to the ride?  On an outdoor ride a few days prior I managed to somehow rip a portion of my cleat while filming something (standing, not riding), which was making me constantly pop-out of the right pedal.  Of course, I had totally forgotten about this by the time I got on the trainer.  High cadence drills were a bit of a mess. 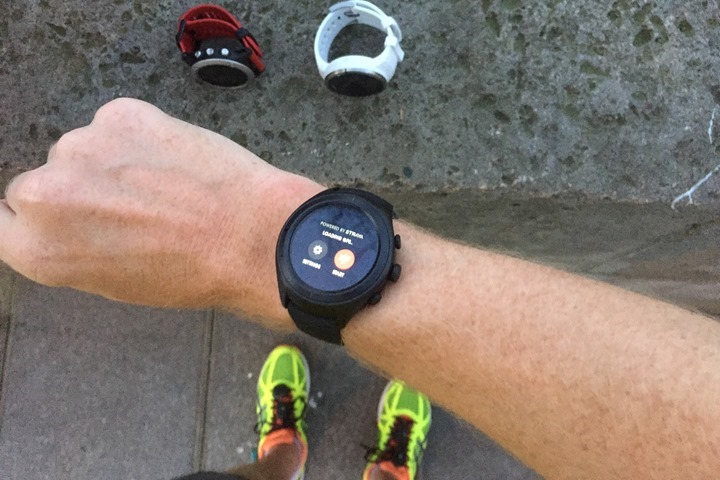 Friday after my trainer ride I headed outside for a short run to validate how a handful of units performed in a tunnel.  For many marathons and other longer distance running races, tunnels are a fact of life.  It’s therefore important that any GPS device you use can handle going through a tunnel without totally screwing up.  My goal for success here is multi-part:

Note that I fully recognize that anytime you lose GPS signal and failover to an accelerometer based situation, that accuracy will be slightly variable.  And that’s OK to a degree.  But it should still be within a few percent for the duration of the tunnel, which would then be barely a fraction of a percent once considered for the entire length of the run.  I also don’t expect the unit to handle any large curves in a tunnel from a data track standpoint.  Just connecting the two dots is reasonable.

Luckily I’m able to easily run to two solid tunnels not far from the DCR Cave.  One is shorter, about 200-300m long.  And the other is longer – about 1,000m long.  I like the 200-300m long one for testing though because I repeat it many times easily, and because it’s perfectly straight.  The other one is curved. 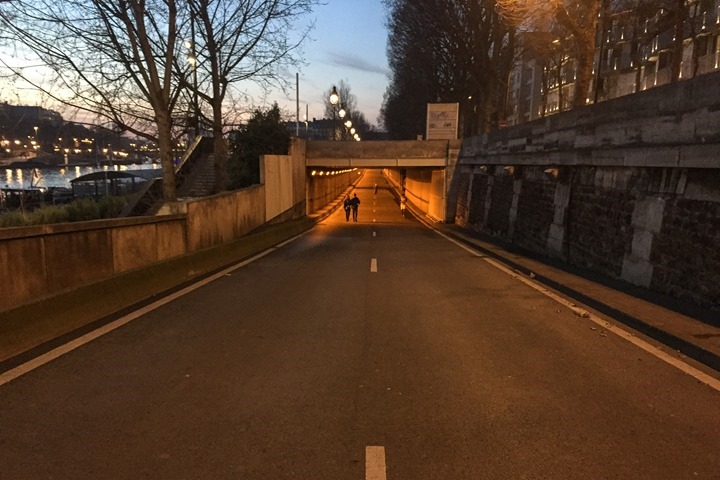 I should probably point out this tunnel is closed to traffic these days, again making it even better. 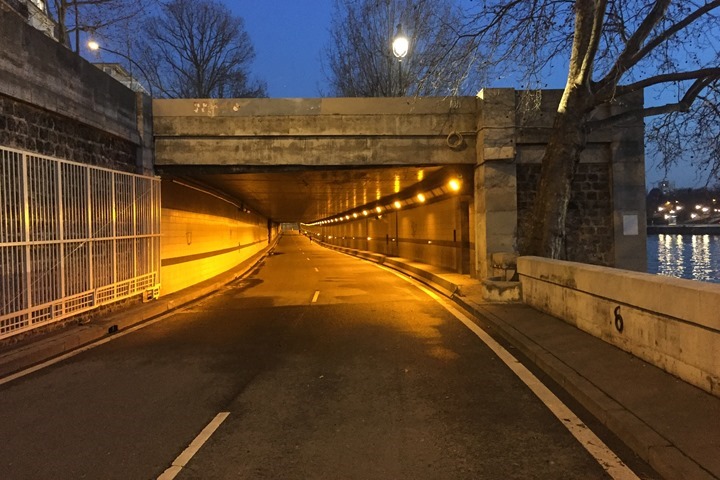 In my case, I ran the tunnel six times, with me going about 125-150m beyond the end of the tunnel each time – thus ensuring the unit had a chance to regain satellite signal. Ideally, of course, it does this in far less time, but it’s hard to know that mid-run.

While I will get to various results down the road for the numerous devices I was testing, I will note that the Suunto Spartan Ultra with its latest GPS-focused firmware update did actually perform the best of all units I was testing.  It beautifully executed the entrance and exit of the tunnel every single time…almost perfectly:

Exactly where I ran.

3) So much unboxing and cleanup

There was a lot of unboxing over the past few days.  And honestly, still a crapton more to do.  Some things I can show now, yet most you’ll have to wait for later.  On the ‘show now’ front though, I’ve got SHFT Run: 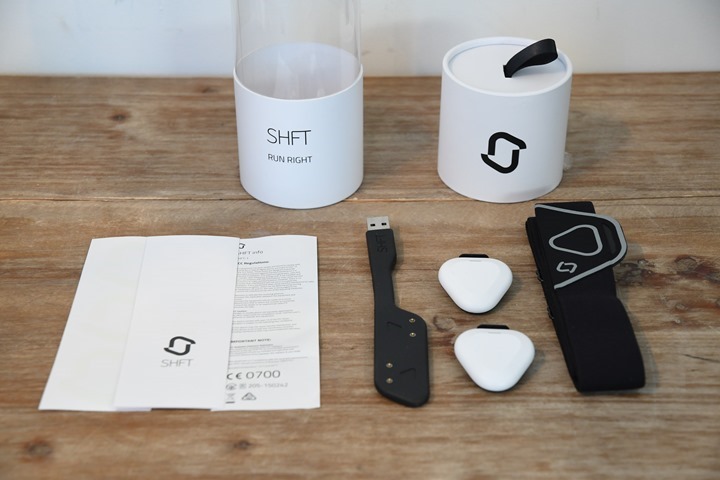 It’s a running metrics device, that also transmits running power too.  I’ll talk about that in two sections from now.

On the cleanup front, I spent about 2 hours down at the Cave on Saturday afternoon to try and get a bunch of stuff all cleaned up.  That included my god-awful cycling shoe cleat situation: 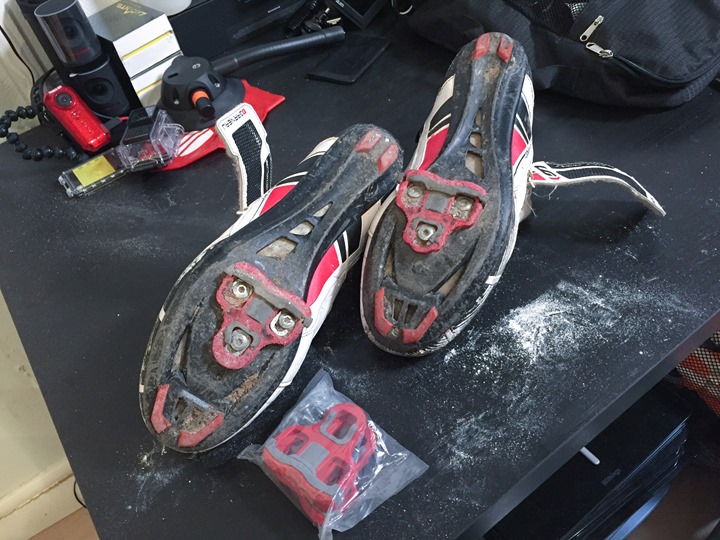 The powder was also on the cleanup list.  That came from the ceiling after drilling holes in it to attach a secondary DSLR camera for higher quality unboxing videos.  I hadn’t gotten around to cleaning that up yet. 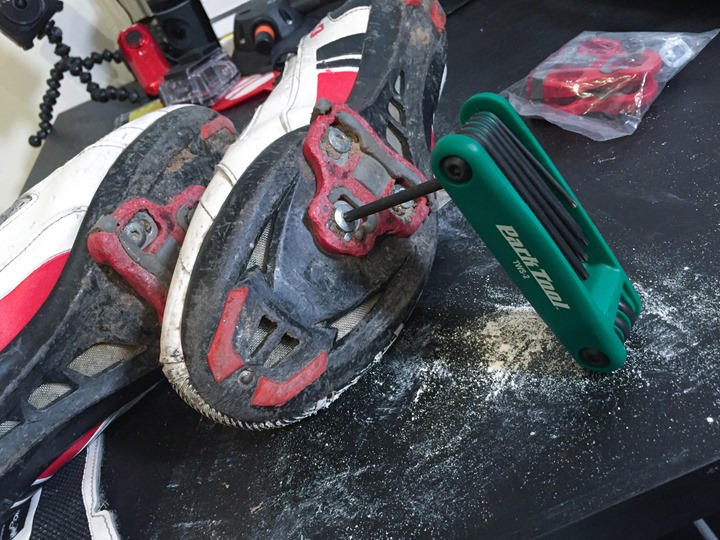 Thankfully, the cleats came off far easier than I expected, and was soon good to go! 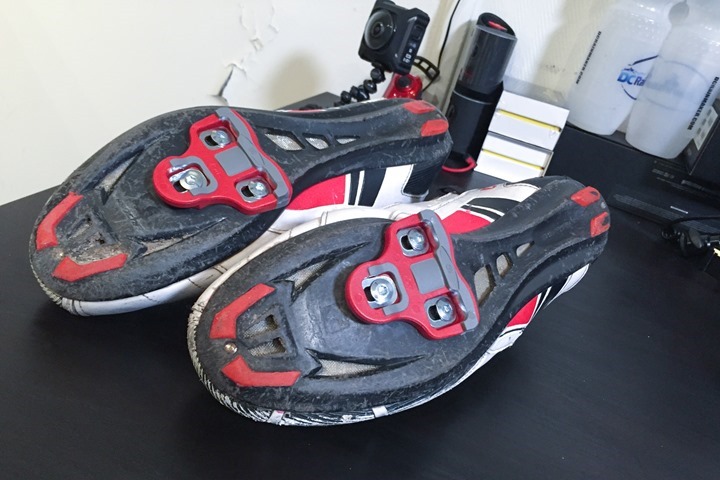 After that, it was back to mundane things like deconstructing the giant piles of gadgets that amassed going into CES in early January, and carried through to Australia for the rest of January.  I think I need an unboxing intern. Hmm… 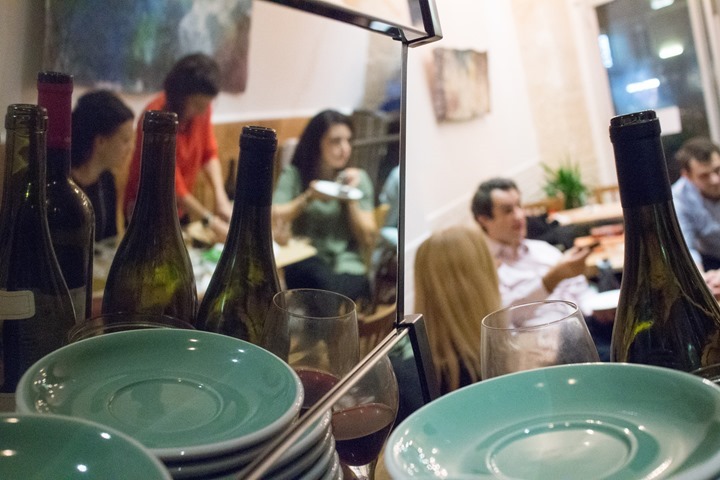 While there was plenty of sports tech happening this weekend, there was also some non-sports tech happenings.  Our friends David and Lillian were back in town for the weekend (after being relocated this past summer).  We’ve been on countless trips and events with them, such as a bunch of ski trips, Rome, the masked Versailles Ball, and many more I’m forgetting.

So Friday night we all got together at Zia (that’s the restaurant of another of our close friends).  That’s one of the great things about owning a restaurant/space/etc – it makes for a great locale for private events that don’t quite fit in your house.  We’ve done that a bunch of times at the DCR/Bertie’s Cake Studio. 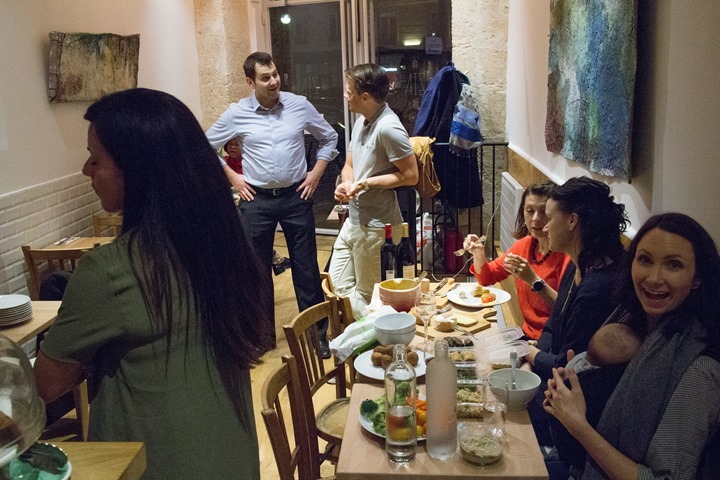 For the most part, it was enjoying the evening for a number of hours in potluck style, so nothing too extravagant.  Though, The Girl did break out a test dessert for folks to try.  It was a dark chocolate tart with a Speculoos crust and salted caramel topping.  Nom! 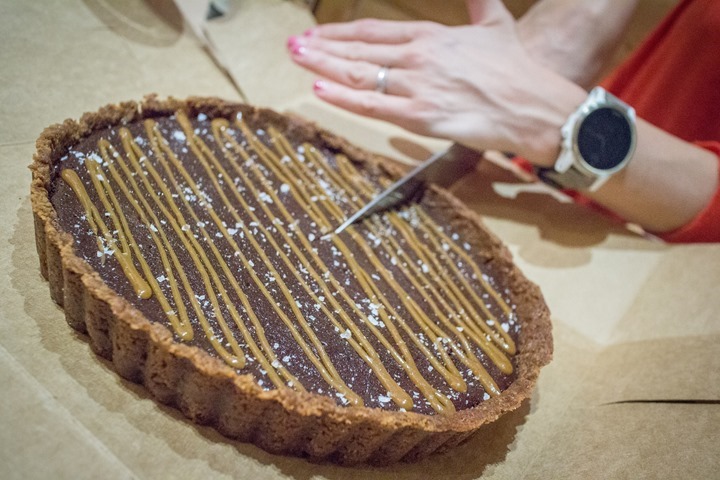 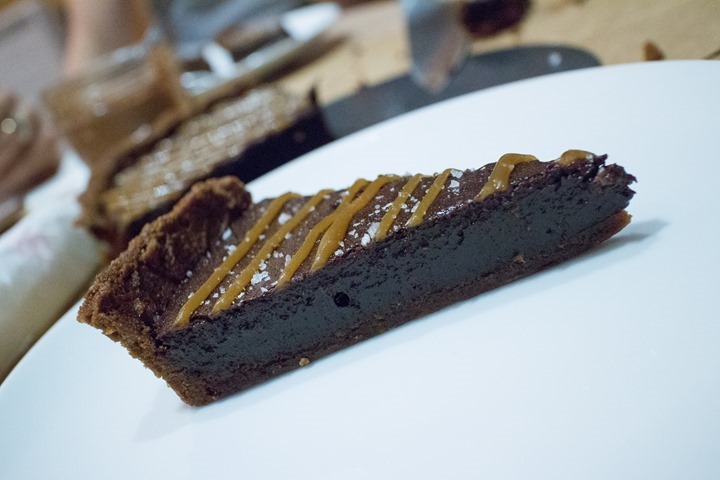 Suffice to say, the dessert passed the test for sure!  Albeit there was about 35 minutes of discussion on exact portion sizing and weighing and calculators broke out to figure out pricing per slice. Though by the time all that was done…the tart was gone. 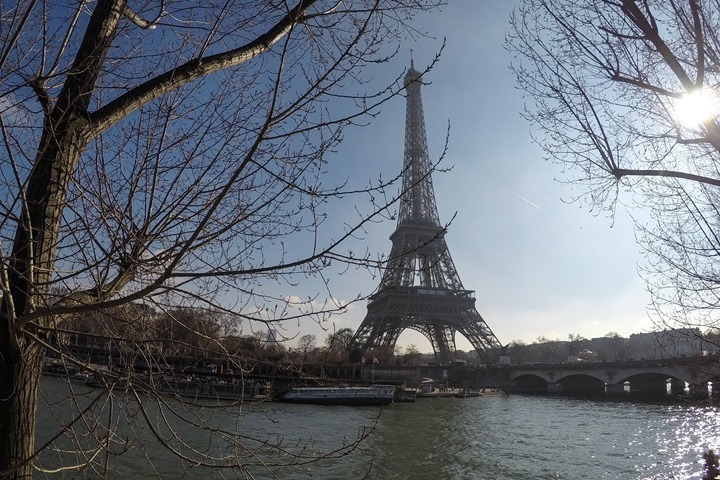 Last but not least, we’ve got a Saturday run around town.  It was beautifully sunny out, so I strapped a crapton of stuff on my running shoes and headed on out. 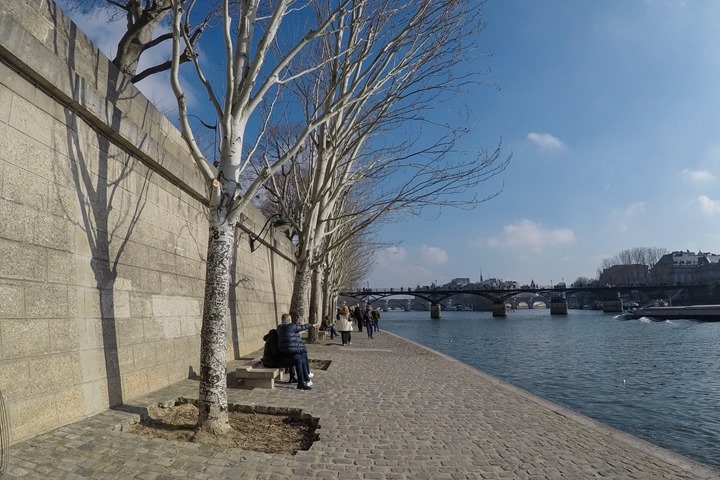 By ‘stuff’, I mean, a lot of things, specifically:

So…check.  I was well monitored. 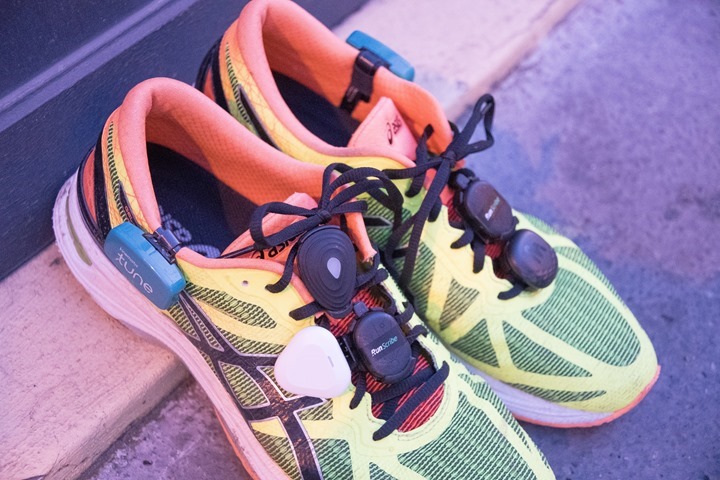 As is often the case, I was testing out numerous things, but of particular interest to me on this run was how the different running metrics compared.  After all – many of them measured the exact same metrics.  Things like: Vertical Oscillation, Ground Contact Time, and even cadence.  Plus a few of them also measured running power too.

My run was rather simplistic – mostly steady state with virtually no stopping across the entire thing – perfect for validating how they compared.  As many of you saw in my tweet though… I was less than impressed:

Wore 6 diff devices that measured Ground Contact Time on todays run. Not a single unit same. And people wonder why I find this data useless. pic.twitter.com/jWNkoPYgFy

I think the above tweet mostly says it all.

Still, tomorrow I’m going to expand out the metric and dive into all of the data sets a bit more.  Part technical dive, part rant, part mystery theater.  Or something like that.

In the meantime – thanks for reading – and have a great week ahead!