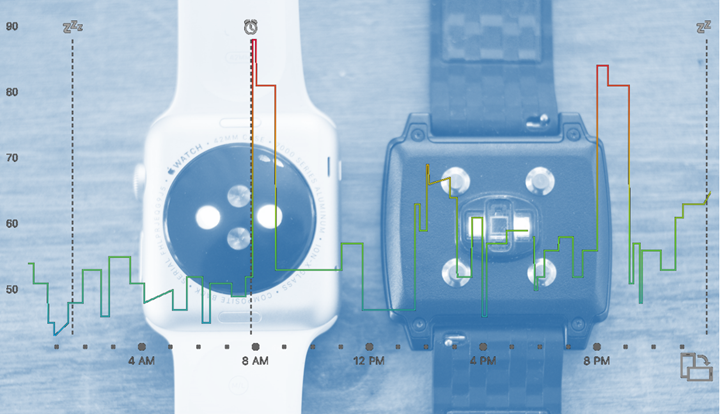 More and more devices over the last 1-2 years have begun to include the ability to record your heart rate (HR) data around the clock.  No longer are you limited to just workout HR data, but now you can get it while you eat, sleep and work (and practice Valentine’s Day).  But the question is how useful is that data? And what can you actually do with it?  Further, does it really matter which device you use?

Well, ask and you shall receive!

The trend of gathering 24×7 HR data was really started with Basis, back a number of years ago with the Basis B1 watch.  And in many ways, they continue to be the company that does 24×7 data gathering the best (now with the newer Basis Peak). When they came out with the B1, they were the first to use an optical HR sensor in a consumer wearable product that monitored your vitals around the clock.  In their case, they did more than just HR, but also things like perspiration and skin temperature.  This allowed you to look at how your HR trended over the course of the day.  For example, you’d generally find it was lower at night and when you first woke up, and then higher throughout the day as you moved around. 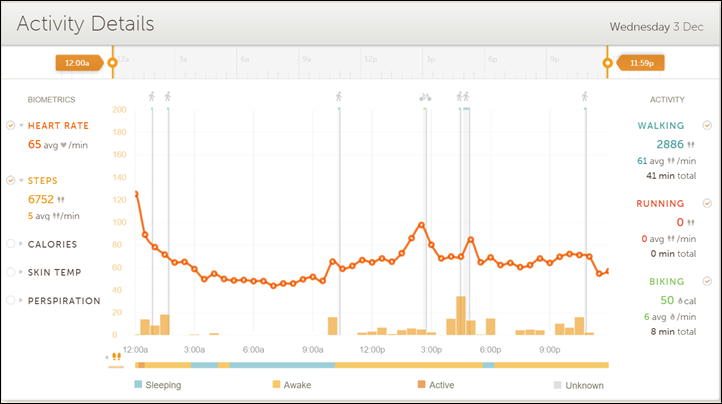 Of course, by itself none of this was particularly earth-shattering or unexpected.  Some of us had worn various HR straps for long periods of time to gather this data, but Basis made it effortless (just wear a watch), and without any uncomfortable chest strap.  Further, they also made the data easy to consume and understand.  I could glance at a dashboard and see well-smoothed data that gave me a macro picture of my day.  But I could also zoom in and get more clarity if I wanted – down to just a few minute slice.  One could see the exact moments your team struggled at the Super Bowl, for example.

All of which could be interesting in different scenarios.  So while I don’t personally have any use for knowing my reaction to the Panthers’ loss at the Super Bowl, I’m much more interested in knowing my lowest heart rate of the day.  This data can be useful in many ways. 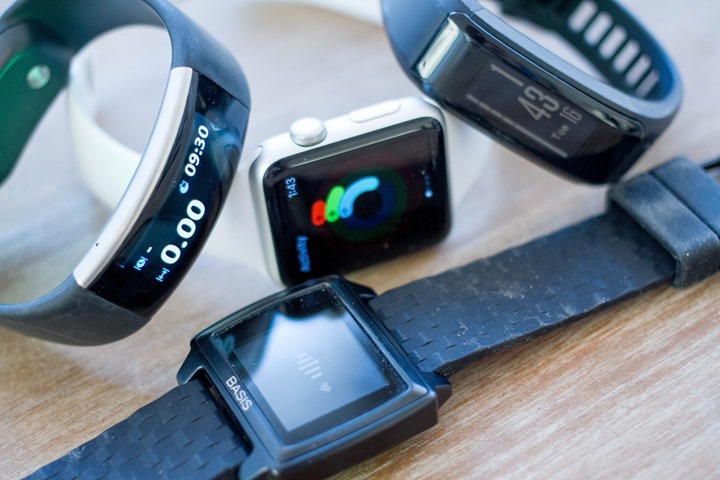 The lowest HR of your day is commonly referred to as your resting heart rate (RHR).  Now technically speaking, per most medical definitions of this, it’s actually your lowest heart rate while awake.  Typically you’ll see slightly lower heart rates while sleeping.  So the term ‘resting’ is somewhat confusing as some may assume rest = sleep.  When in reality, rest = lying on the couch watching TV.

For example, if you confer with the American Heart Association, they note that RHR should be measured while sitting or lying:

“Your resting heart rate is the heart pumping the lowest amount of blood you need because you’re not exercising…Resting, sitting or standing, your pulse is usually the same. Sometimes as you stand for the first 15 to 20 seconds, your pulse may go up a little bit, but after a couple of minutes it should settle down.”

Most devices on the market today can automatically detect your RHR and display it to you within the app or even on the device itself.  For example, on a Garmin Fenix3 HR, it’ll show your RHR within the heart rate widget during the day and then also on the Garmin Connect Mobile app itself under ‘Resting’: 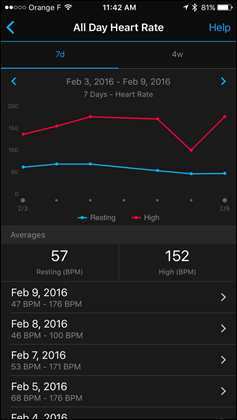 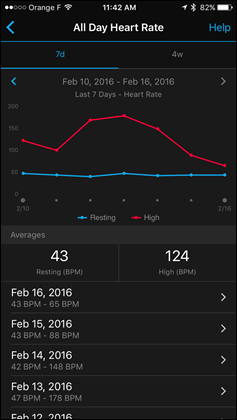 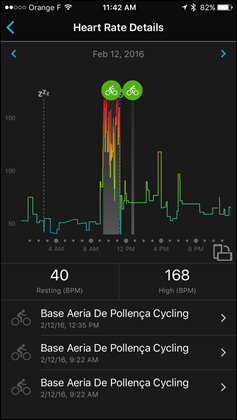 Turning to Fitbit, you can find your RHR value displayed, alongside a trending graph: 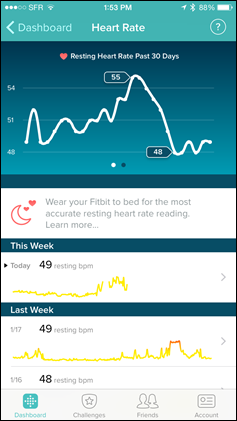 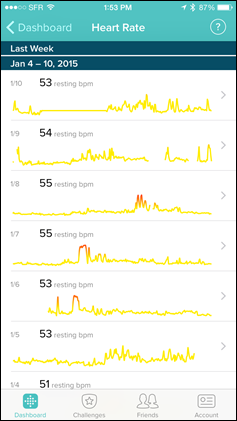 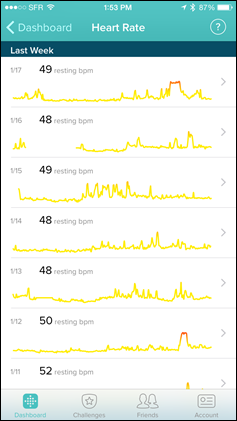 And finally, other devices like the Apple Watch give you all the data but allow you to DIY figure out your resting HR.  If you just wore the device during day (likely since the Apple Watch doesn’t do sleep metrics), then you can comfortably just take your minimum HR value shown on the graphs. 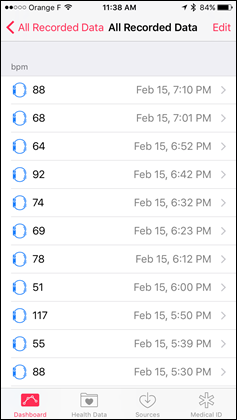 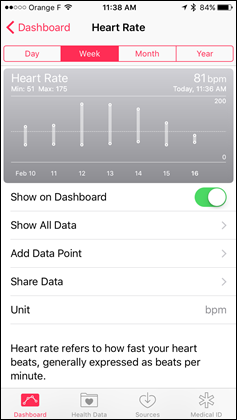 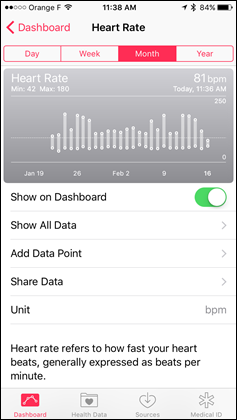 But wait a second you ask – how does a unit differentiate between sleep and non-sleep rest?  Well, that’s where things get a bit messy.  Some don’t.  Some just spit out the lowest value of the day.  And yet others get too conservative (Fitbit) and actually don’t take the lowest values at all (upwards of 10bpm higher than your actual resting HR).  As a result, I recommend you spend the first few days looking at patterns while you’re relaxing early in the morning.  Consider just lying around when you wake up and looking at your actual HR using the device, and then later in the day validate that the value shown on the app for RHR is your lowest HR value while awake.  Remembering that you usually want to lie down for 2-4 minutes to let things calm a bit.

For me, on most days the difference between an RHR value at sleep versus just being awake is only about 2-3bpm – so not enough to be of major concern. But if it’s 10bpm due to data gathering wonkiness, then that’s more problematic.

Now the value of all of this resting HR data is trending.  Coaches have long asked athletes to take and log their resting HR values day to day, usually using old-school methods like a heart rate chest strap, your finger taking your pulse manually, or some inexpensive devices that clip on your finger (this is how I used to do it).  However, some of those were cumbersome, and all required extra effort (which, let’s be honest, none of us wanted to do upon waking up).  So, data was often somewhat variable and inconsistent day to day.

For me, the most valuable use case of the data is around fatigue and predicting some sickness.  For example, my resting HR is usually in the 39-42bpm range.  When that rises, I know that my training load, travel load, or work load may be getting out of balance.  That might be expected for a heavy training week.  But if I’m on an easy training week and my resting HR has been climbing to 50bpm, then something might be amiss.  It may be other stresses, or other factors.  But it’s a key indicator that something isn’t right.

Historically I’ve found that as soon as my RHR breaks about 51-52bpm, I’m sick and/or feeling beat down/exhausted.  I may be lacking sleep or just overwhelmed.  For each person, how you respond to that will vary.  And what those values are will vary as well.  But most people that track RHR data do find fascinating patterns in it.

Not All Data Is Equal: 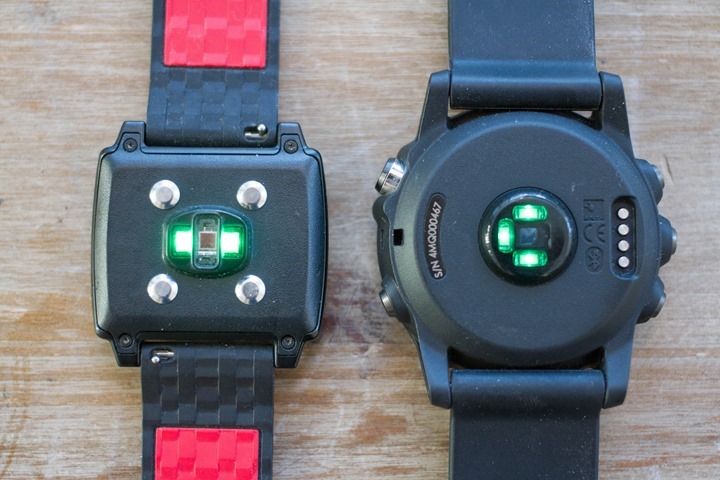 Now, there are two core factors to be aware of when choosing a device that measures 24×7 HR:

A) Accuracy (duh)
B) Update frequency

In most cases, the vast majority of the devices on the market today actually nail the first part without issue.  Measuring your HR optically when not in sport/exercise isn’t terribly difficult.  Numerous models out there today that suck at sport/exercise are perfectly fine (even great) in non-sport conditions.  It’s usually the excessive movement that causes the challenges.

In fact, I can’t really think of a single mainstream optical HR sensor that does a poor job of optical HR accuracy at rest.

But next is arguably just as important: Update frequency.

This defines how often a device records your resting HR, and what triggers it to do so.  Some companies simply have straight-forward update/recording patterns.  For example, Basis is sampling constantly, and recording the average every minute (and totally exportable).  They are pretty much the leader when it comes to gathering this type of data and doing so correctly.  Fitbit is fairly similar as well here in terms of data frequency, where they sample constantly, but record at every 5s during 24/7 mode, and 1s during workouts.

Next you’ve got companies like Apple, which samples every 10 minutes for non-sport use.  So while you’re just watching TV or at the office, it’ll record your HR every ten minutes.  So it’s on a set schedule, but just not as often as Basis or Fitbit.  In most cases, this will still get the gist of things though, given the update frequency is low enough that it’s unlikely to be terribly far off when trying to find your resting HR since you’re bound to sit down for more than a 10 minute stretch at some point in the day.

Finally, you’ve got companies like Garmin which vary the update frequency by device.  This is likely due to battery constraints on certain models.  For example, the Vivosmart HR (a band) has a relatively poor/infrequent update frequency – potentially spanning hours in my testing.  Whereas the FR235 and Fenix3 HR can be much more frequent.  But, not as frequent as Basis, Fitbit, or even Apple.  Garmin appears to be basing whether or not to sample your HR based on the accelerometer.  In theory this would be smart usage of the battery.  But in reality, it does seem to miss large time gaps on certain days. (Update: The Garmin Fenix 5/5S/5X and FR935 all record at 1-2s rates, due to a new optical HR sensor within them.)

Ideally Garmin would follow their own precedence of allowing a user to select a variable or preset recording rate, just like they do for sport activities (and have for nearly a decade).  That would allow a user to decide between battery and more accurate data. 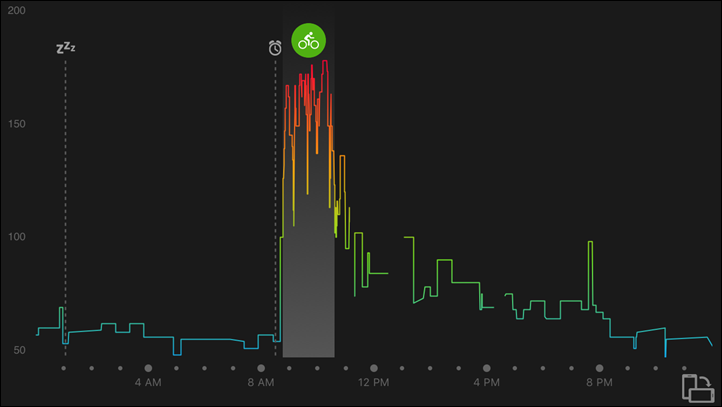 Finally, there are some weird caveats with other companies.  For example – some companies (Fitbit) decide to ‘re-invent’ what’s considered a resting heart rate.  Even if my daily graph shows my lowest value at 39bpm, a company might say my resting HR is 48bpm.  Sometimes companies try and cross-reference this with when I’m sleeping – however not always.  So you’ll actually want to look at the graphs you have and validate that your lowest daytime value isn’t below your RHR value (which would indicate funny business on behalf of the company). 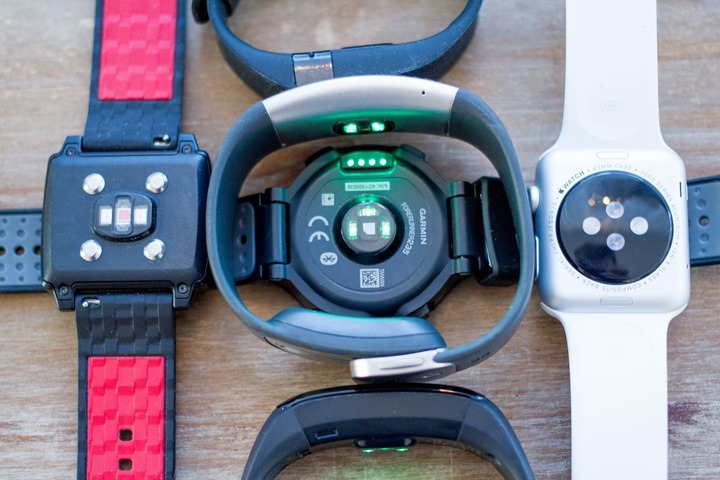 Ok – so you’re ready to do this?  Or perhaps at least look into it more. Here’s the devices that as of today support 24×7 automated HR recording.  While I wouldn’t say it’s every single possible device on the market, it’s basically all the major ones that someone into fitness would want to be looking at:

*Units I have not yet tried/used extensively

The following do NOT do 24×7 HR and why, despite you thinking they might do so:

In my reviews of all these products, I cover details on recording rates and any limitations. 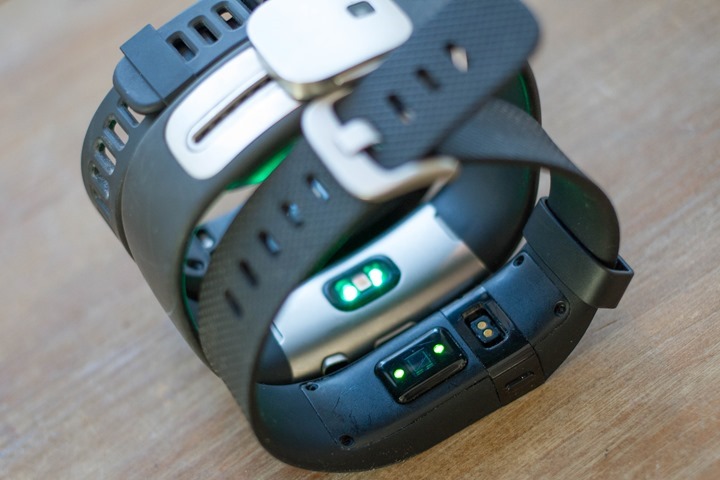 Now as much as these devices will tell you your 24×7 heart rate rather accurately, it’s still going to be up to you to figure out what’s ‘normal’.  Meaning, normal for me is 39-42bpm for resting HR, as it starts to creep up into the upper-40’s, I then know something might be amiss.  But for you, your normal might be 50bpm or 55bpm, and it could be 60bpm until you’re at less-ideal states.

That’s where data collection just takes a while.  It’s not something you can look at just a week’s worth of data and know.  You really need many weeks of data, especially across different training conditions/cycles (for example a rest week versus the final week in a load progression).  The good news though is that collecting this data is as simple as just wearing a watch or band.  There’s no extra data work to be done.  So after you wear it for long enough, the trends usually become rather clear.

And finally – what about HRV,or collecting data during sleep with sleep trackers like Emfit, Beddit, and the Withings Aura?  Well, we’ll save those metrics and data types for another day.  I’ve got lots of sleep trackers at work as I sleep gathering such data to put together more details there soon.

With that – thanks for reading – and, I’d certainly love to hear some of the patterns folks have found with RHR or 24×7 data.