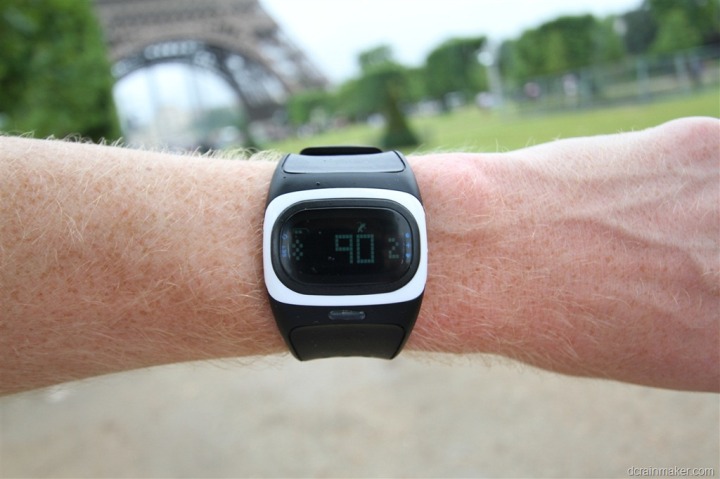 NOTE: This product has since been released, and I’ve in turn published a full in-depth review of it here.

Late last week I got a chance to try out the new Mio Alpha watch, which is a strapless heart rate monitoring watch.  The watch is currently on Kickstarter, though, they’ve already passed their initial funding goals.  While I didn’t get to spend a ton of time with it, I did get to go wander off for a short run – and then hang out below a tree while it poured outside so I could poke around at the unit.  Therefore, my impressions are just that– very brief and definitely subject to change as they near final product.  The unit won’t be shipping until later this year, and thus still is considered somewhere between alpha and beta level. 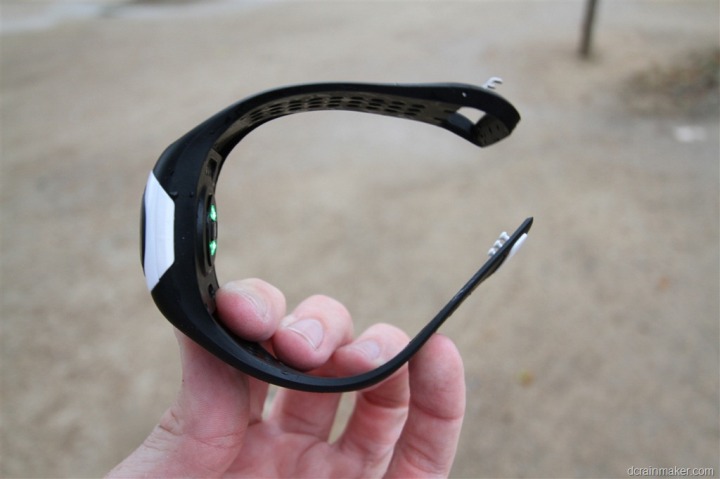 The unit itself uses optical sensors to measure your heart rate at your wrist.  This technology has been around the medical community for years – but adapting it to sport activities has been tough.  The trickiest piece is ensuring that the unit is able to accurately measure heart rate even though your bouncing down the street.  If you flip the Alpha watch over, you’ll see the green glow of the optical sensors (the top four little circles are the charging ports). 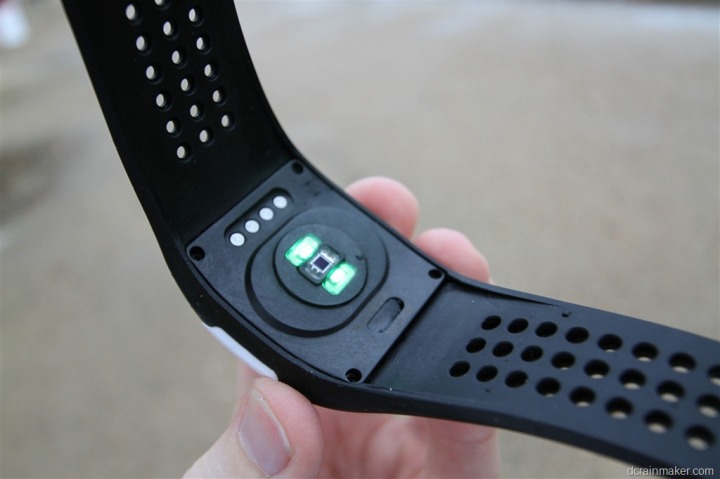 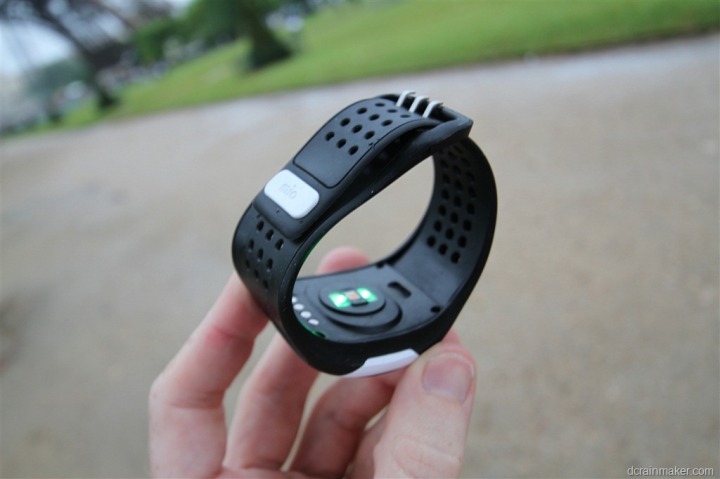 Having seen and played with the Basis watch a bit, I was curious as to how tight the watch strap would have to be.  In the case of the Basis at the last point I saw it in person (CES in January), the units were fairly tightly wrapped around the team’s wrists.  However, I was pleasantly surprised to find that I didn’t need to wrap the Alpha watch any tighter than I normally would wrap my watch – and certainly far from uncomfortable: 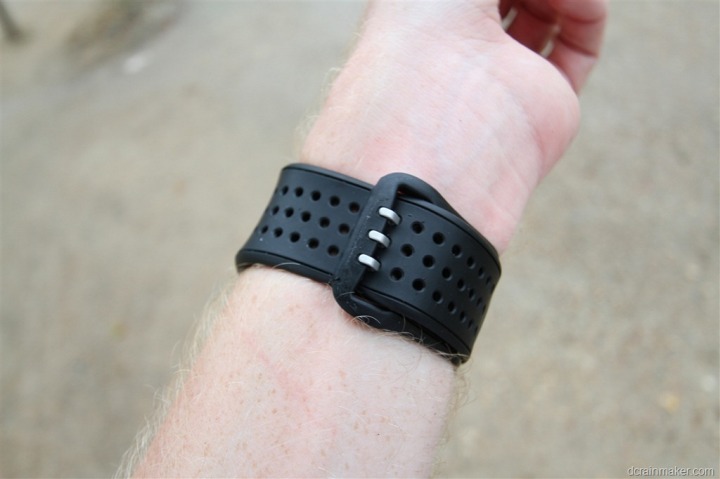 Speaking of Basis, there are some key differences between the two companies immediate goals (Basis vs Mio’s Alpha), despite both using similar technology.  Here’s the down and dirty version:

Basis: Aims for continuous body monitoring through both optical heart rate, as well as other sensor types like galvanic skin response, distance walked (accelerometer), skin temperature and more.  Continuous as in 24×7, synced and uploaded to an online portal, which incentivizes you to be more active.  More focus on general health and fitness, less focus on endurance/intense activities.

Alpha: Aims for optical real-time heart rate monitoring for up to elite level endurance and intense activities, primarily running, but certainly not limited to that.  No internal storage at present, so it’s more akin to a heart rate strap (it merely broadcasts current values), than a device that stores and uploads.  Less focus on overall health and fitness, more on getting you the data so you can connect it the apps/devices of your choosing.

Neither is right or wrong, just different markets.

What’s cool here is that today it does this with ANT+.  Thus, I’m able to pair it to anything that accepts ANT+ heart rate data (which is basically every ANT+ device on earth).  I could pair it to a Garmin Edge cycling computer, or a Timex running watch.  Or, as was the case last Thursday – to an iPhone with the Wahoo Fitness iPhone adapter: 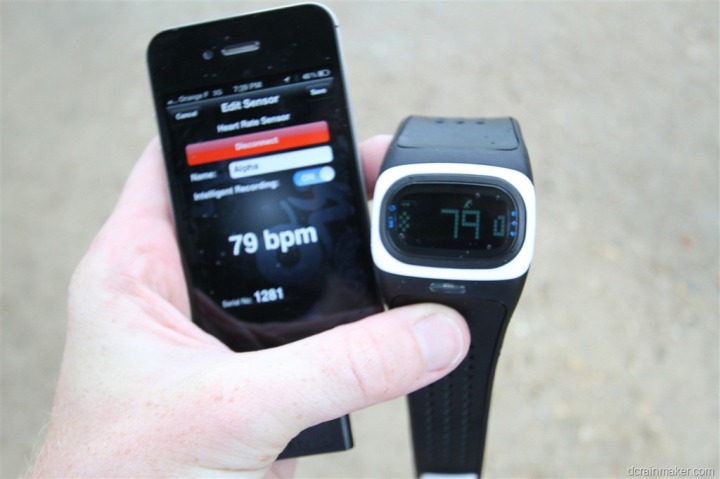 This enabled me to then record the data via the Wahoo app, or any of the other gazillion apps that support the Wahoo Fitness adapter.  Or, I could use any Android phone that has ANT+ built in, or the Garmin Fit Adapter, or (fill in the never ending list here).  In addition, they’ll also be offering a model at the same time that uses Bluetooth 4.0 instead of ANT+.  The point being, tons of options.

So, I took advantage of these options.  I had about 35 minutes to play with the device, enough time for a short mile or so run around the Eiffel Tower, and then a bit of time afterwards to poke at it.  All, in the rain. 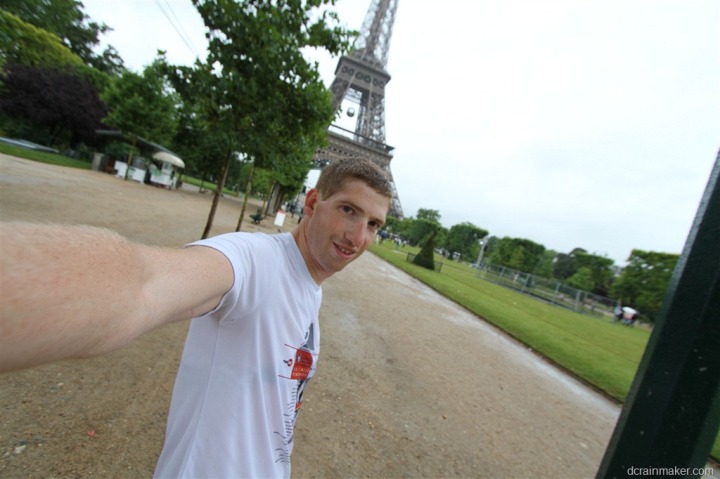 Instead of just wearing the Alpha, I also wore a FR910XT paired to a conventional ANT+ heart rate strap (happened to pull a Magellan Switch ANT+ strap out of the box today).  This way I could record conventional heart rate strap data to the Garmin FR910XT, and then record the Alpha data to the iPhone.  At the end, the Wahoo Fitness app would upload the data to Garmin Connect – making it easy to compare. 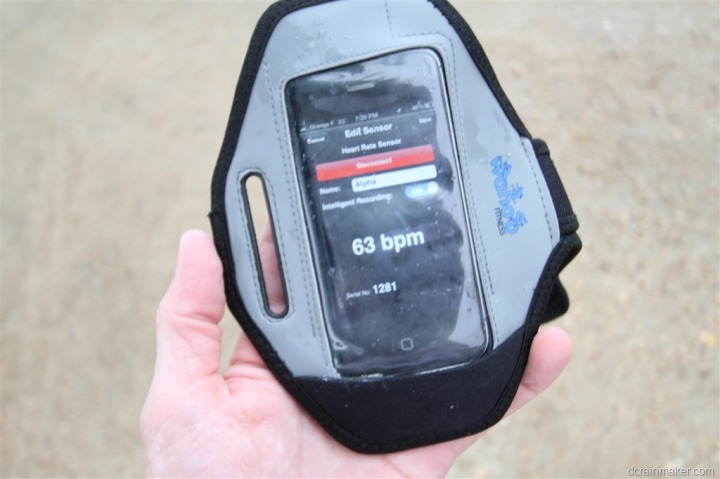 During my run, I was continuously watching both units.  I stayed fairly constant in intensity using HR as a guide for the first portion of the run, and then I kicked up the intensity a fair bit towards the end, before tapering off in a very short cool-down walk.  I found that both units on the displays tracked very close to each other – within a beat per minute: 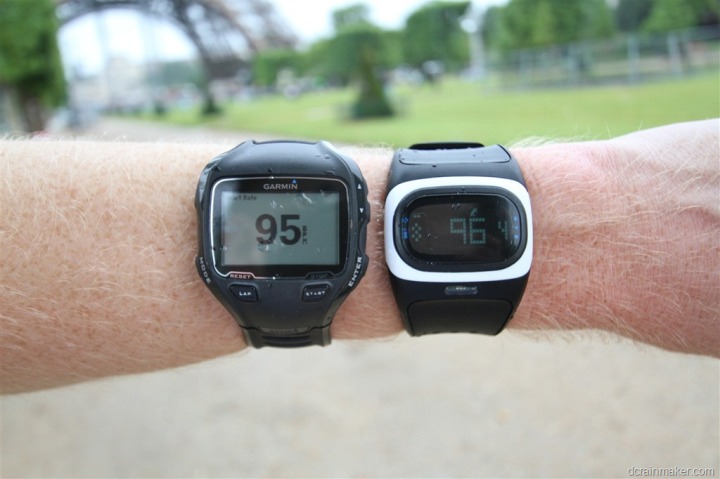 Afterwards, I went to compare the data.  I did have a list of known beta (pre-release) bugs that they had sent to me earlier, thus I was prepared to find a rather buggy experience.  In actuality, I only ran into one bug, which you’ll see in a moment.

First, is the Alpha strap-less heart rate data.  The whole file is up on Garmin Connect, if you’d like to poke at it.

You’ll notice that it looks fairly even, except for one crevasse of a drop towards the end during my high intensity bit.  They had told me beforehand that I could expect to see occasional drops in ANT+ data, which was a bug they have planned for an August 16th firmware update (again, months before release).  What’s interesting though was that the unit itself was actually showing me the correct values on the display, as I was watching it constantly as I hit upwards of 180bpm – primarily because I was curious if it would track correctly at the higher intensities.

For comparison, here’s the traditional heart rate strap data recorded on the FR910XT:

On the comparative side, I’m fairly happy with that given where they are in the development cycle.

At the conclusion of a run, it will normally display total run time, average heart rate, and time ‘in zone’.  At the conclusion of my run on Thursday however, I had to give it back.  As they get closer they said they’ll get me a unit to spend a bit more time with.

So what are the challenges ahead for Alpha?

Well, I think the functionality tradeoff may be a bit tough.  At present, without recording, you’re either doubling up on watches (one for optical heart rate, and one for actually recording), or you’re taking a cell phone with you.  In general, it seems that the folks that don’t like heart rate straps tend to also dislike carrying cell phones (based on what I hear, which of course may not reflect reality).  Of course, for cyclists who have a handlebar mounted unit, the watch is potentially a bit nicer than a heart rate strap which can sometimes be susceptible to jersey flapping (and thus wonky HR data).

Down the road, they are looking to add ANT+ foot pod support (for speed/distance), as well as GPS, but those would be in new hardware versions – and not in the super-near term (not now).

Additionally, while for the Kickstarter release they are supporting Bluetooth 4.0, the buyer eventually must choose whether they want Bluetooth 4.0 (Bluetooth Smart/BTLE), or ANT+.  It’s not both, as the watches don’t have them both on a single chip.  Thus you have to decide essentially whether you want to connect it to ANT+ devices (existing units you may have), or cell phones (since at present, no other watches support BTLE HR except the Motoactv).  And you can’t change your mind later.

On the water front, the rain/water definitely didn’t impact anything accuracy-wise.  It may be hard to tell from the photos, but it was pouring out (as I was standing there taking these photos, the umbrella vendor tried pitching me an umbrella about 12 times). 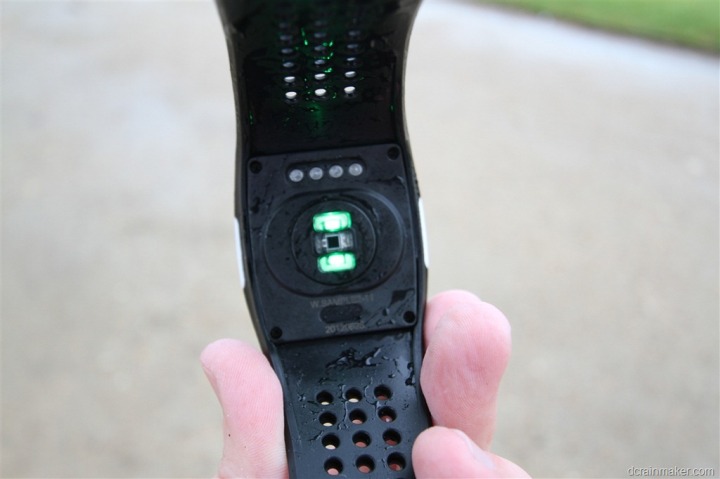 While it will read heart rate underwater and the unit is waterproofed to 30 meters, the act of swimming (swim stroke) does cause some challenges for the heart rate data in that it creates too much ambient noise for the filters at present to remove.  So the data ends up being a bit funky.

The unit gets about 12-14 hours of battery life while reading HR, and is rechargeable (in time-standby mode it gets 9 months).  It recharges via USB port and a small charging dock.  I will say that the folding back under USB ‘home’ is brilliant.  Wish other sports tech companies did this (my backpack is constantly tangled in charging cables). 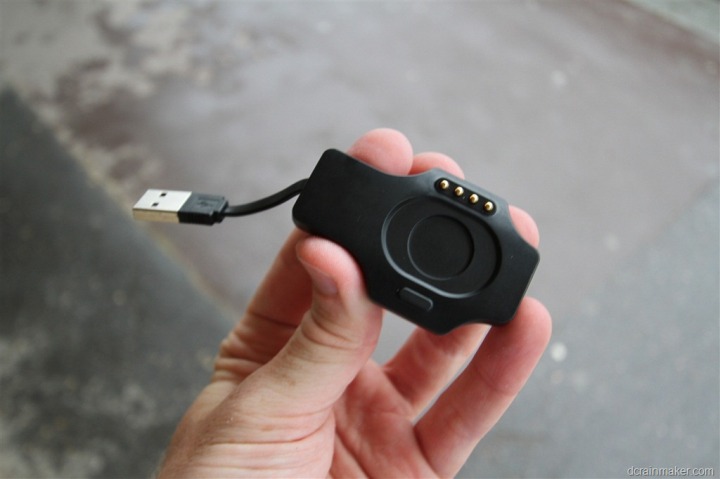 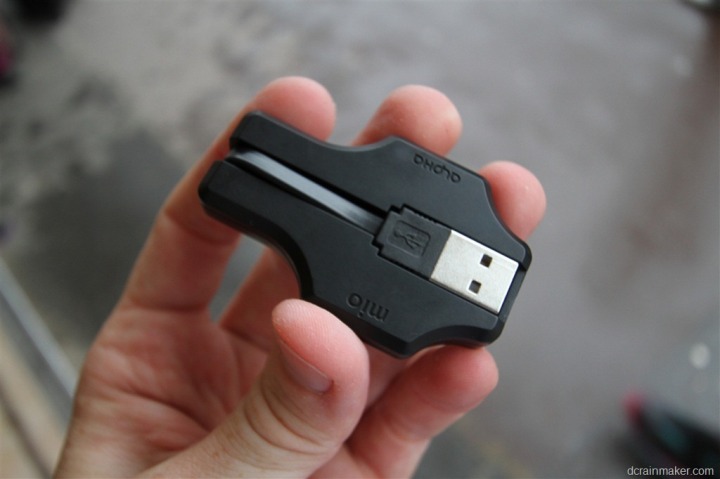 Looking at the market at large, one might look at Polar as their largest direct competitor.  Polar makes a sea of units that don’t do anything more than display heart rate related data (and not record it for later downloading).  Thus, these units are its biggest competition.  Yes, Garmin’s and the like also record heart rate – but I think that if you’re looking at a Garmin and/or similar GPS based device, you’re likely trying to get speed and distance, which Alpha won’t get you.

Ultimately, I think optical HR is an interesting concept – and I feel that if you fast forward 2-3 years down the road, many other companies will have integrated similar technology into their devices, especially if the accuracy level remains high. The founder noted to me late last week that their goal is that the accuracy of the unit is high enough to be used at the elite athlete level, which is hopefully a good sign of where they expect final production unit accuracy levels to be at.

Speaking of which, the unit is currently slated to be available in November of this year.  At present, they are on Kickstarter for $150 a pop, but they’ll be eventually retailing for $250 each (pretty common pricing discount that many Kickstarter projects do).  I do think $250 is a bit tough to fetch given the market, but $150 is more reasonable.  Time will tell.

As always, if you have any questions, feel free to note them below and I’ll loop back and get the answers.

[Update: Please see my full in-depth review and post any questions/comments there.  I’ll be closing this comments section, but of course leaving the product review post for folks to ask questions]