CES 2013: Health and Activity Monitors–Bringing it back to reality edition

How about them apples?

Seriously, that was first thought about seeing the below situation from afar.  The folks at the booth nearby had urged me to go over and try and ascertain what exactly was going on in there.  Given it was almost 6PM, and said booth that was urging me was serving beer – it was almost more akin to a drunk dare than anything else. 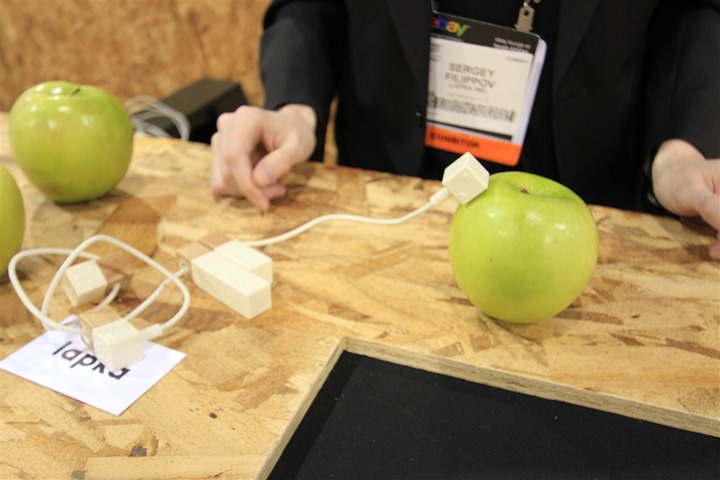 Nonetheless, I went and poked around.

(P.S., if you’re not familiar with my intro sentence above, start here).

Turns out, the below is Lapka.  The product is designed as a sensor ring (like to wear around your neck) that tells you a few different things.  First, you’ve got that probe that you can poke into a food item of your choice and determine whether or not said food is organic.  In this case, apples. 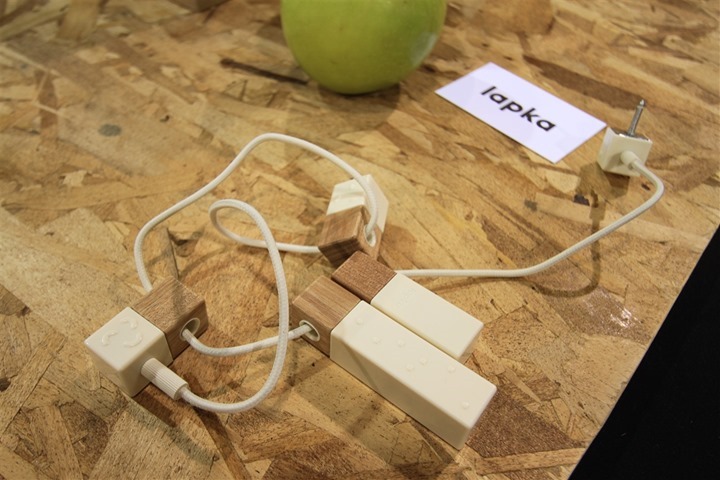 The unit will come back a few seconds later with the results of the test, looking for various chemicals.  It transmits this information via the headphone jack on the bottom of your phone (you plug the other end of the cable in there).

The only challenge here is that the information ends up being incredibly technical.  There’s nothing wrong with technical – but there’s also nothing that the average consumer could or would understand.  Take the below screenshot (showing a summary of different values taken).  Try and understand that.  Just tell me – is it organic or not? 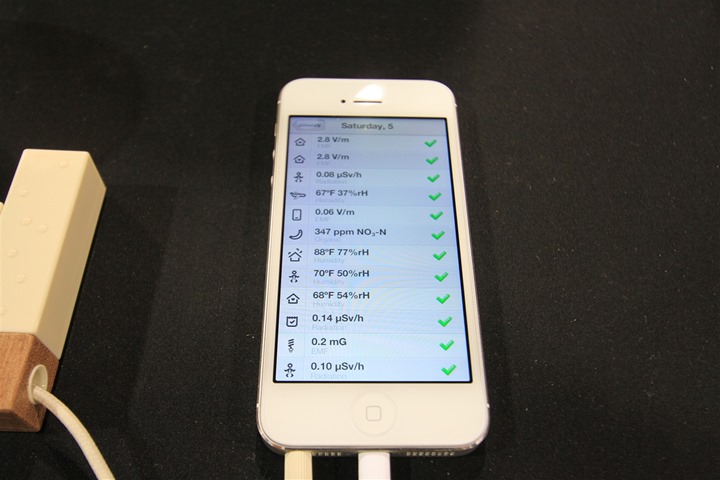 Each one of the below dark wooden vertical blocks is a different sensor, aimed at measuring different properties.  The left one is the organic tester, and then from there, the other three sensors (getting taller) are the humidity, radiation (Geiger counter), and EMF.  All, for $220. 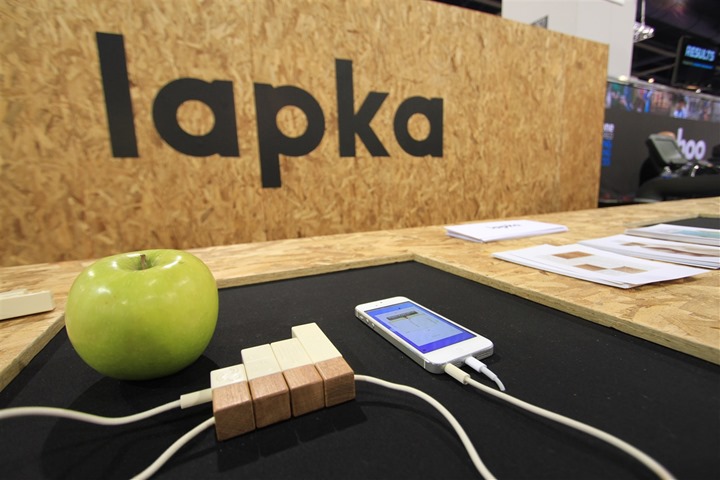 While an interesting device to stumble upon on the show floor, it just seemed awkward in every possible way.  From the fact that it requires you to plug it into your phone (insert Bluetooth here), or that the data on the phone is a mystery to the common person (I being one of them), or even just the blocks themselves.  Who’s really going to carry that around with them?  Perhaps in a purse, but, I can’t imagine that being in my pocket: “Is that Lapka, or are you just happy to see me?”.

Don’t get me wrong, I think the underlying science and technology is cool – but as you’ll see throughout the rest of this post, companies so often forget to make that science both understandable, as well as relatable and actionable.

Hapifork is a Paris based company that has an electronic dishwasher safe fork that you see below on the table.  The fork is a wee bit large – sorta kid-like like, but, still a fork nonetheless.  The fork measures both how many forkfuls you take of a given food – and more importantly – how fast you eat. 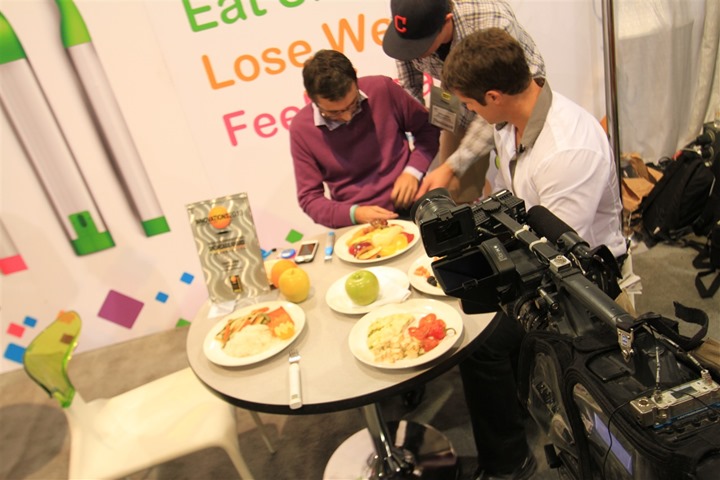 (Note the apple.  I wondered if they borrowed it from the Lapka booth, since they were just a few dozen feet away?)

The idea is that if you eat more slowly, you’ll lose weight by eating less as you’ll feel full sooner.  This is of course hardly new , it’s just applying the technology to the situation.

Unfortunately, by time I swung by there again they were mostly wrapped up for the day.  But I had a chance to talk to one of their folks and we’re going to catch-up here in Paris in a few weeks and I’ll get a full demo of the fork – possibly even with real food! (The above food was plastic). 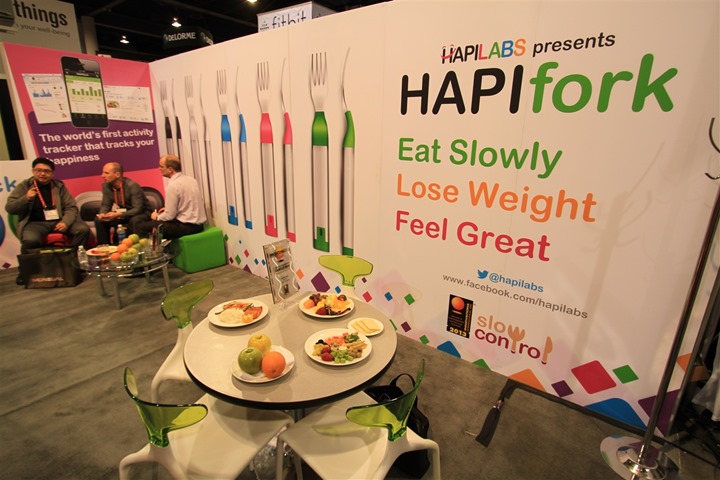 The unit then transmits this information via Bluetooth to the app that’s accompanying it.  It was interesting talking with them, if nothing else to compare eating styles and habits (with respect to meal length) from the US to France.  They can now actually quantify that – both from the length of the meal itself, to how fast you consume food.  I’m pretty interested in doing some fun comparison tests as I travel the world.  For example, if I eat at the same pace as my company, and do so in France how does that vary with those in Sweden, Turkey, South Africa, the US, and others?  Might be interesting.

Obviously, it’s not magically detecting whether or not you’re eating a salad or a Nutella dessert, but, the idea is more focused on simply slowing you down.  At any rate, I’m looking forward to seeing it in action.  They are planning on going to Kickstarter in early February.

Moving along to another Paris based company – Withings. 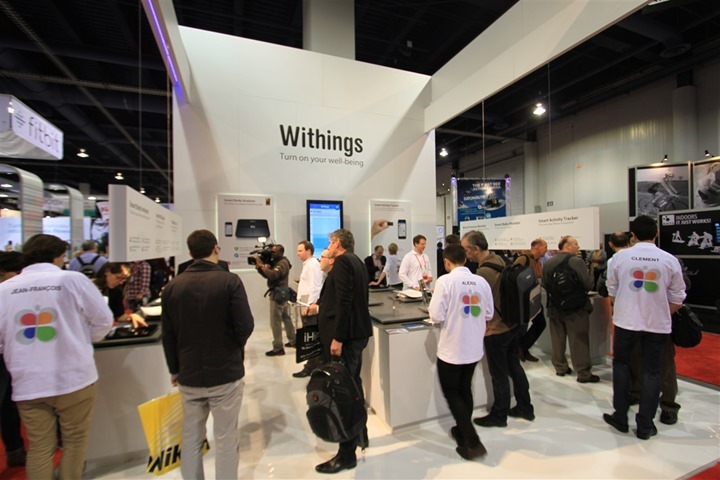 You’ve seen my past review of the Withings WiFi scale, as well as the upcoming Withings WS-30 (upcoming on my review) that was released in November/December.  They’ve got yet another new scale for the new year, the WS-50.  This unit does everything the WS-30 introduced (such as Bluetooth Smart Sync) plus all the original WiFi scale features.  Then, the unit also measures heart rate (when you stand on it), carbon dioxide (in the room, not of you), and the room temperature. 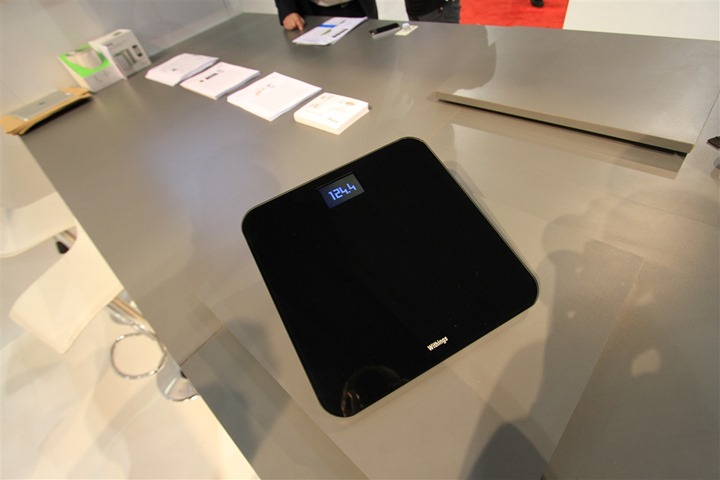 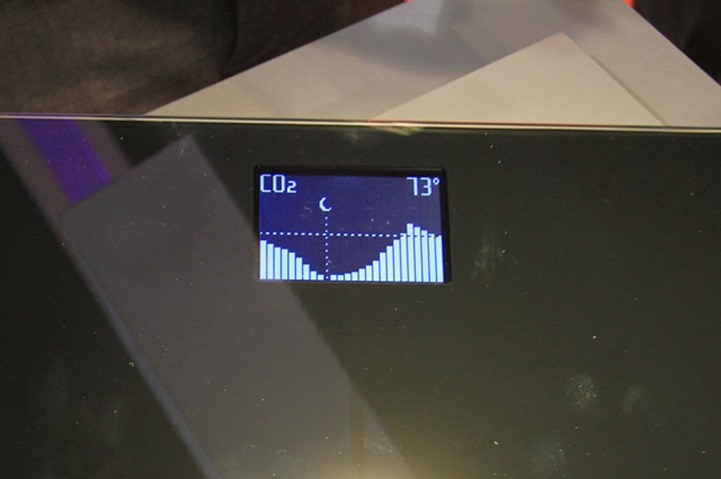 It even makes pretty graphs!

Now, I’m all about data and integrated services like those that the WiFi scale offers (i.e. connecting to other platforms).  But, I’m just really unclear on what value room temperature offers in this equation.  I sorta know it’s either hot or cold in my room.  And, no amount of the scale monitoring this temperature is going to impact my weight.

Then there’s CO2.  This value isn’t really ‘actionable’.  Meaning, what am I going to do with this metric?  It’s not an alarm like I have in case of a gas leak.  This just merely notes it.  I guess I could leave the window open more, but again, I’m not really convinced this is super valuable.  That said, I’m more than willing to be convinced otherwise – and hopefully a full in-depth review will help me understand it better.

Finally, the addition of heart rate.  The challenge here is the heart rate is taken while standing up.  Which means it’s clearly not going to be your resting heart rate (since you’re standing).  So, it’s more like your ‘resting but not resting’ heart rate.  It’s just not of any real value since a standing heart rate could be influenced by so many things – all the variables are still there.

Moving onto their other new product – the Smart Tracker.  This, I do actually like. 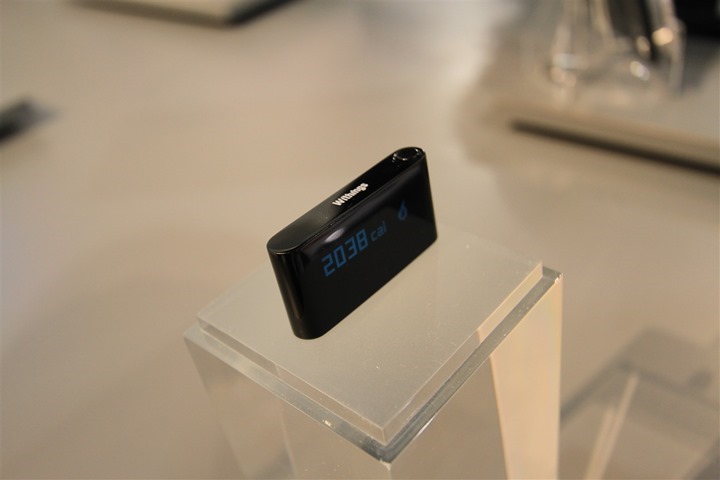 Of course, it’s more or less like every other fitness tracker out there, but it has one unique feature.  Here, let me flip it over: 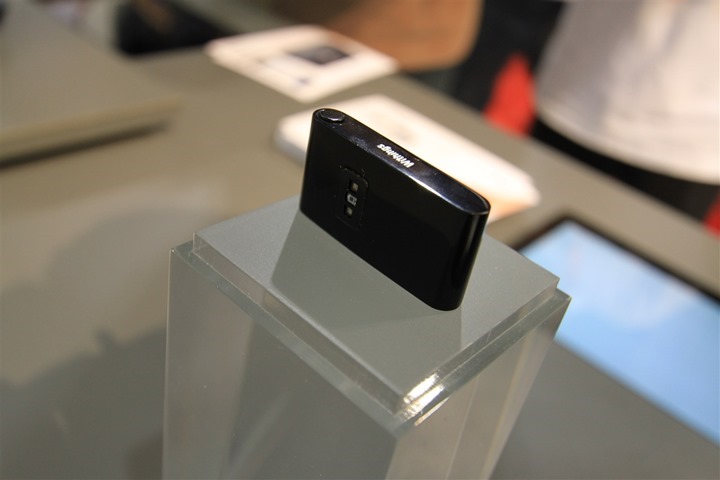 Like the scale, look for a review of the fitness when they send a courier across town with a unit.  I should have the WS-30 scale review out before then hopefully. 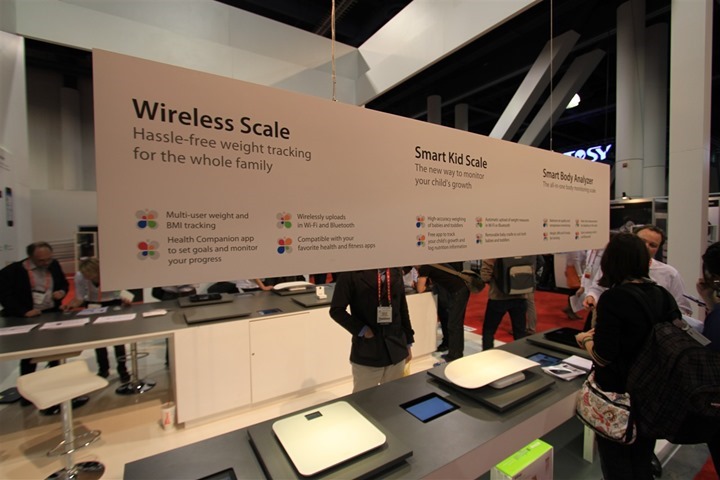 Next up, the Fitbit Flex.  This was newly announced at the show.  And widely panned at the show by just about everyone in every publication, and in every conversation I had on the show floor. 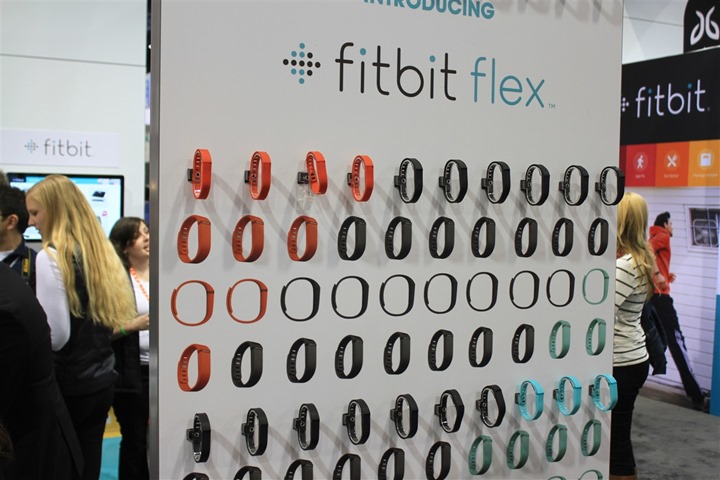 The Fitbit Flex slides functionality wise in between the Fitbit zip (which I LOVE), and the Fitbit One (good, have that too).  It includes sleep tracking, but not stair tracking. 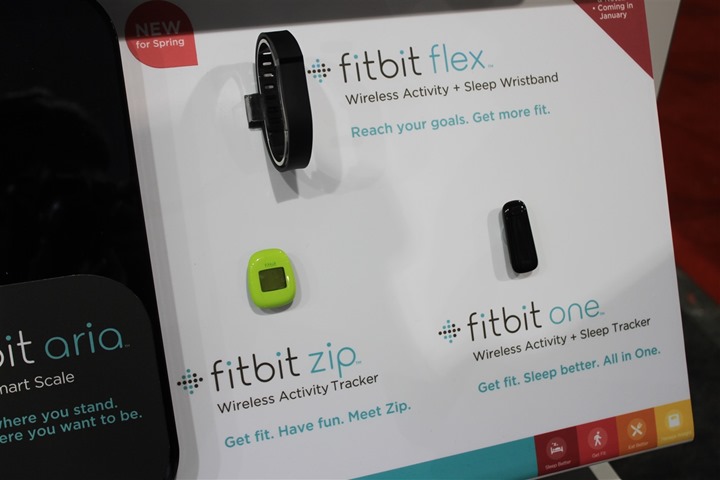 So why did everyone pan it?  Well it’s missing one thing, any guesses? 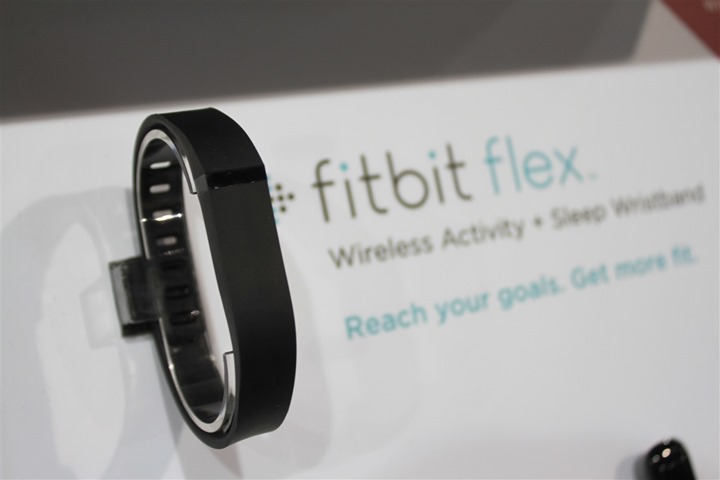 Yup, a display.  Instead, it has five little LED’s that tell you whether or not you’re at your goal for the day.  But doesn’t give you anything more than five little lights can display.

But fear not, if you want to find out what you’re doing you can pull your phone out, and tap the Flex with it, which will then trigger the app to open via Bluetooth, so you can view your steps on the phone.

The challenge there is a complete lack of understanding about how this segment works.  It’s all about motivation, and all about seeing a number that’s perhaps ‘almost’ to the daily goal, and motivating you to go that bit extra and knock it out.  Take for example the team I’m on at work.  In general, up until these guys got Nike Fuelbands, you wouldn’t find them within 10 miles of a 5K race.  And, probably still won’t.  But, we finish the day after a long 10-12 hour flight, then dinner, and then as we near the hotel one of them will say “Oh, wait, I’m super-close, I’m going for a walk to get my points high enough!”.  Simply because he glanced at his wrist.  That’s it.

That’s why those devices are successful.  Didn’t they learn anything from the Jawbone Up?

It’s probably hard to understand just how many fitness tracker devices there were at the show.  Pretty much everyone was trying to sell one, or talking about the one they want to sell.  Yet few bother to understand why exactly the likes of Fitbit or the Nike Fuelband are so successful.  It’s all about a simple device, and a super-clear and easy to use web service, ideally with a connected phone app.

Take for example, Bodymedia.  They released a new unit, seen two pictures below. 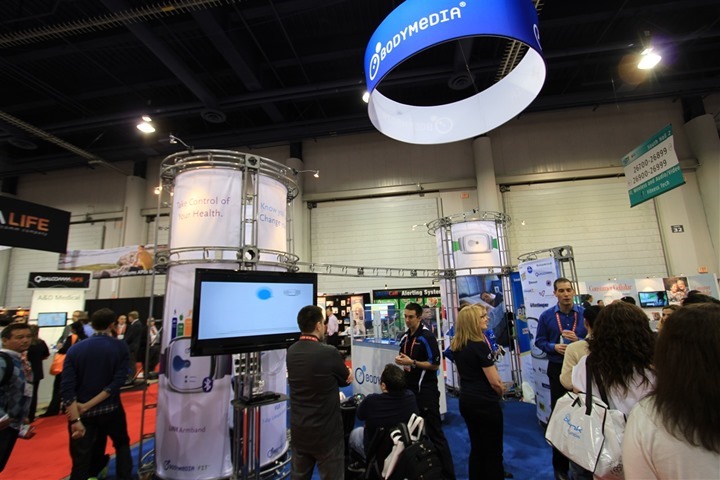 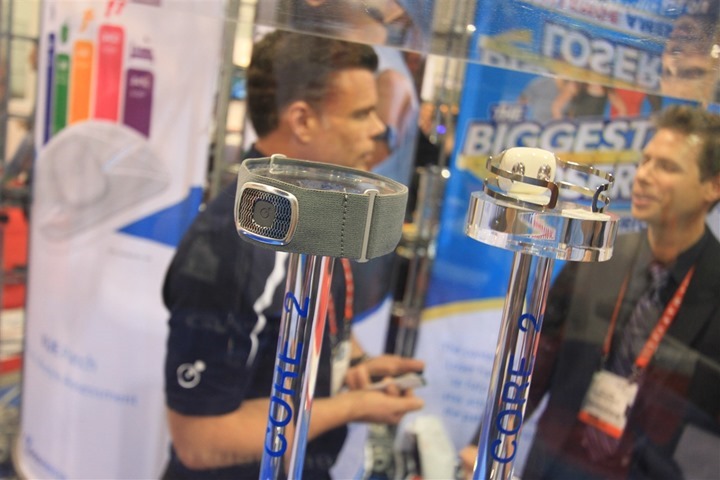 They’re most well known for weight-loss focused endeavors, and for being on the biggest loser.  Which is awesome.

But what’s not awesome is their software suite and tools.  Have you ever tried installing it?  It’s like taking a trip back to 1998.  And that’s the bad side of 1998.  Like Windows ME 1998 (remember that)?  One of the main reasons I just haven’t had the desire to write up a review on the unit I got last spring.

A couple of companies I didn’t quite have time to spend with, but just to show you the amount of pedometers here. For example, FitBug: 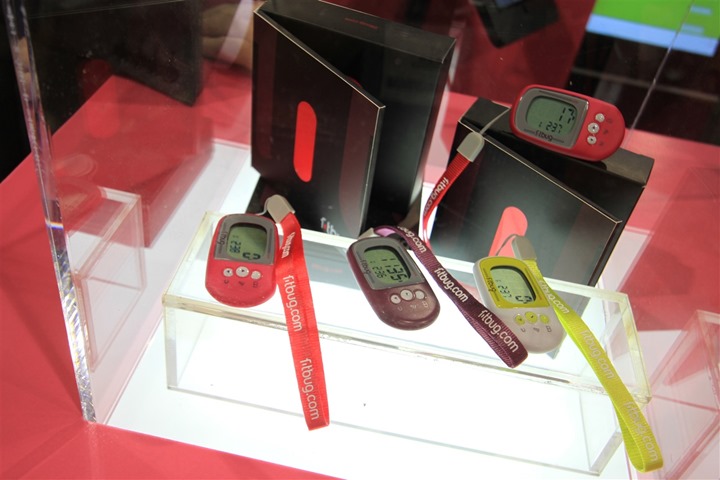 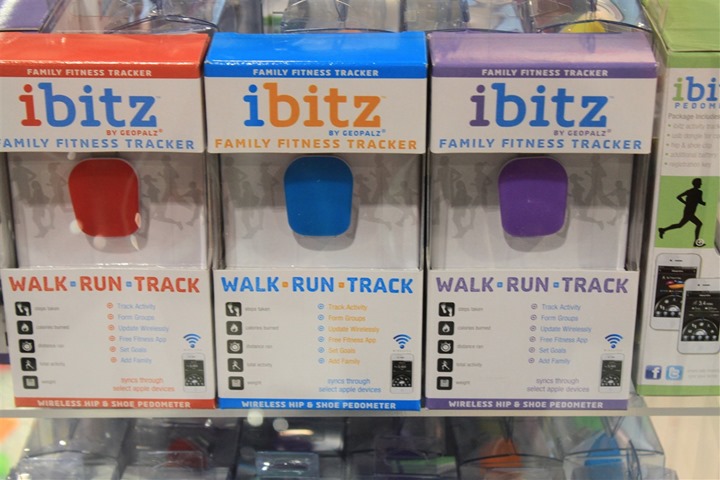 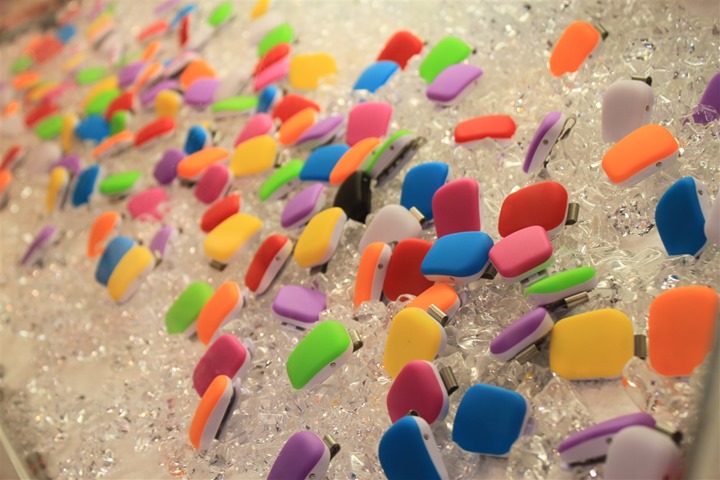 While I was at it, I should point out this Dayton Industries display.  It shows some customized heart rate straps.  They supply virtually every ANT+ heart rate strap on earth, for every company (Timex, Wahoo, Garmin, etc…). 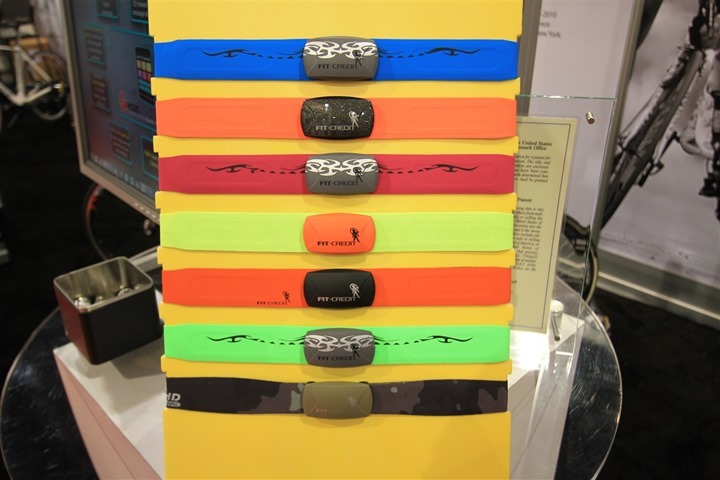 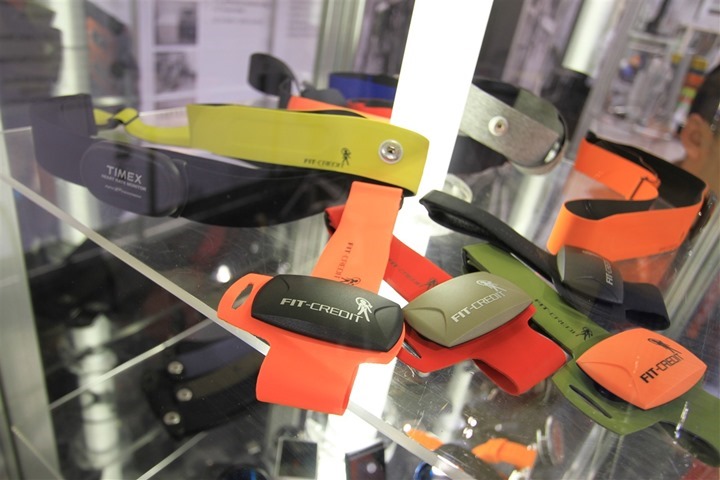 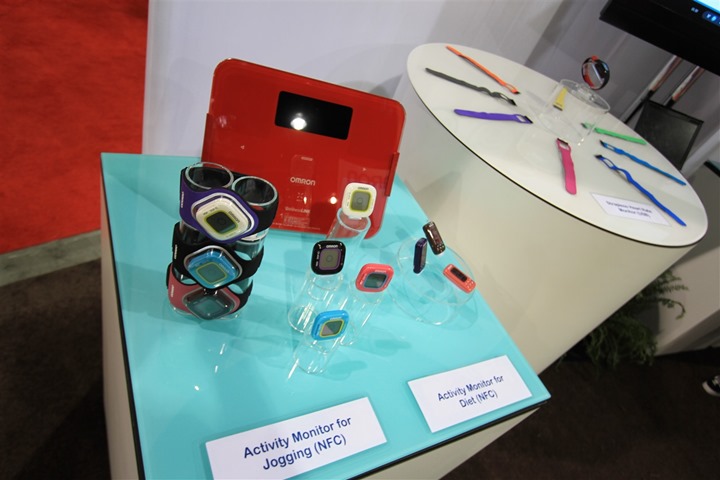 A number of you asked about Motorola, and finding more about the future of the Motoactv.  Last year they had a massive booth (like, the size of a football field), with crazy cool stuff going on.  Really impressive.

This year, they had a small side room – generally invite only.

Except, they no-showed.  Here, the room (all locked up and un-occupied): 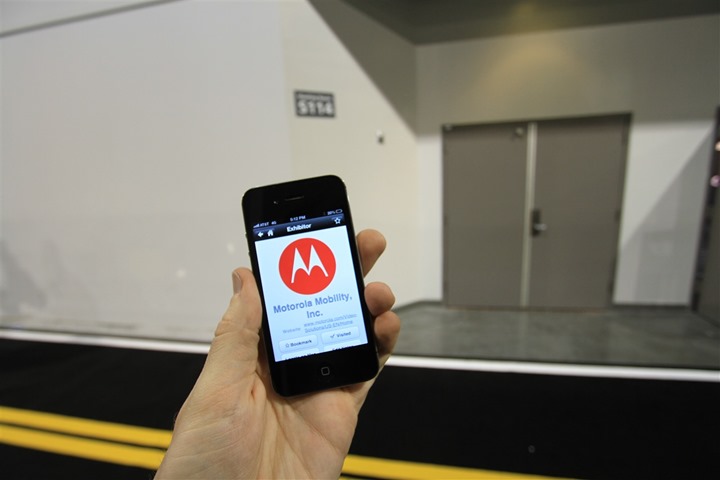 Some of you also asked about Mio Alpha.  I’ve got final units of both the Bluetooth Smart and ANT+ variants, and find both variants awesome.  Love them, generally work great.  More on that in the coming week or two.  I have all the data, just a matter of writing them up. 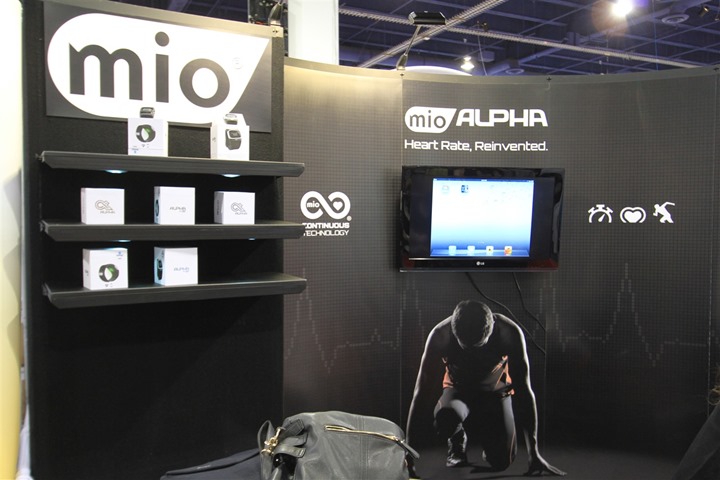 Almost-last-but-not-least, I wanted to share this picture.  Mostly, because I thought it was cool.  The Polar folks had a jump rope group in, plus I believe, one of their own that mixed it in there too.  It was pretty cool, and they managed to be the only fitness booth to draw a legit crowd for their frequent sessions (the crowd was probably 30-40 people around me to my left/right).  On the screen, they were broadcasting the heart rate in real time, I assume via their H7 Bluetooth Smart strap to some sort of custom app/program.  Anyway, cool stuff and worthy of pointing out. 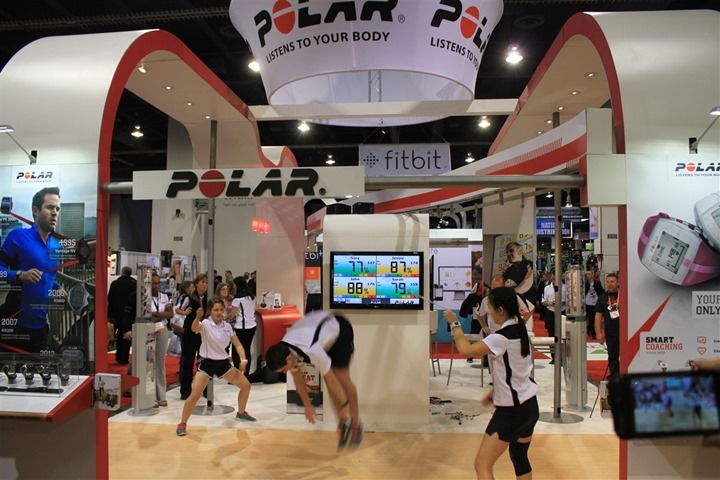 A look from above:

Finally, one pretty handy aspect of this year was that the health and fitness area was truly all in one spot.  Very much appreciated.  Last year, it was ‘sorta’ all in one spot, with random companies off in the distance.  While the only company not in the same exact spot as Garmin (they were upstairs in a mostly car GPS area), they were just a quick escalator ride away, no more than a 90 second walk if you knew the trick to getting there.  Otherwise, it was awesome that I could spend less time trying to bounce across the floor between meetings, and more time exploring. 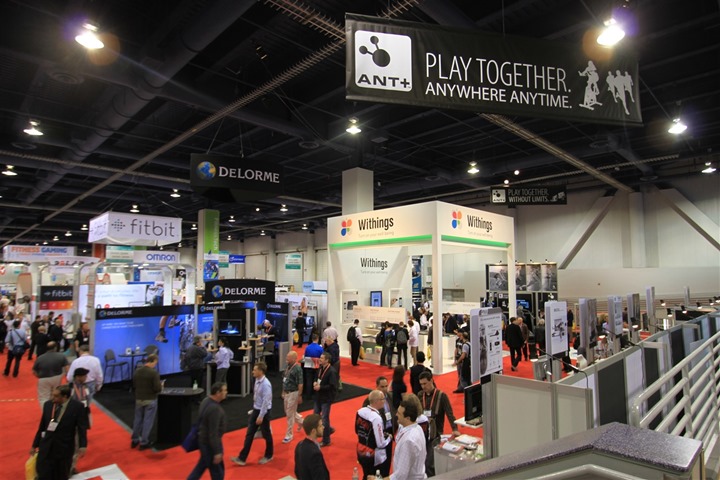 I’ve still got one more quick CES post to share (maybe two if I decide to share all the non-fitness funny random things I found), but thanks for reading!