Last night, I had the chance to run with a recently announced Kickstarter watch.  Now, I’m going to save my first look thoughts about the Mio Alpha for Tuesday, but based on some of the Twitter traffic after I tweeted about it, it sounds like there’s some interest in hearing about some of the other Kickstarter projects I’ve ‘backed’.

Now, to be clear ‘backing’ on Kickstarter doesn’t mean I’m anything more than me being a sucker that’s plunked down a few bills in hopes to eventually get a product.  In fact, there’s no guarantee at all you’ll get a product – or the timelines associated with it.  And unlike a typical investor (aka backer), you don’t get any return on investment down the road when the product does well.

That said, I love Kickstarter, primarily for the technology projects.  To date, I’ve backed about a dozen projects, both sports technology and otherwise (some photography stuff).  If you want to see everything I’ve backed, you can click here.

But let’s dive into the different projects and why.  Note that some of the ones I mention below have closed already, and some will close in the near future (including one closing today, Bia).  Also note that as usual, I have no affiliation with any of these folks. 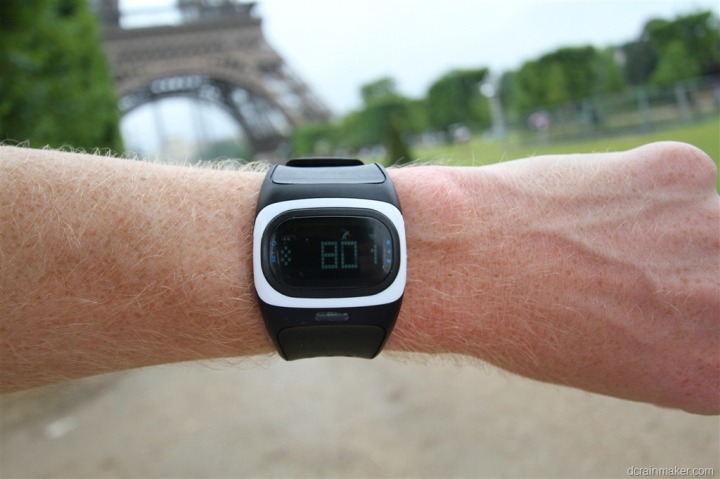 Might as well start here, since I just tried it out in person.  Alpha is a heart rate monitor that optically reads your heart rate straight from under your wrist – no heart rate strap required.  If the accuracy I saw tonight in the rain is any indication, I think that this technology is probably indeed the future.  In the same way we’re starting to slowly see 3D accelerometers replacing separate footpods in running watches, I think we’ll also start to see this strapless HR seep into the mainstream here in the next 1-2 years.  I’ll talk more about how this product is different from the Basis watch I’ve previous covered, on Tuesday, along with some cool comparison graphs between the heart rate data from the Alpha watch and a regular Garmin watch.

Bia’s a $99 sports watch that’s aimed at women.  I talked about what I like, and don’t like in this post a few weeks ago.  The Girl also gave her opinion.  I’ve got three reasons for backing it. First is that I’d want one for a review.  Second is because I think it’s worthy to add more competition to the space.  And third because I love the live tracking and safety alerting stuff, and believe it’s definitely the future of where the market is going.

But Bia’s got it tough, really tough.  As of now, they’ve got about 27 hours left to raise $100K (of $400K).  That would be damn impressive if they hit it.  But, they’ve put out the word the last few days, got some big exposure, and it might happen.  Of course, if they fall a single buck short, they won’t get anything, and everything is refunded.  Now, it’s plausible that a ‘donor’ (aka investor) could just straight up donate the remaining.  Or they could hit the jackpot and get frontpage Engadget, NY Times, Gizmodo coverage. Ya never know, but $100K is a lot for 27 hours.

This one may come out of left field.  Mostly, because I’m not 100% certain how I’ll be able to use this in sports technology.  tōd is a Bluetooth Smart (Bluetooth Low Energy) device that you can pair to phones that support Bluetooth 4.0.  You can use it for things like locating your car keys and other proximity tasks.  I have a few ideas on how to use it in sports technology, but ultimately it will take developers to make it happen.  I see tōd in much the same way that many folks see/saw the Garmin ANT+ Chirp device, which allows ANT+ devices to detect a given object within a given proximity.  In the case of that device, I saw potential for it to be used in ultra running races to allow runners to validate that they’ve checked into an event.  Especially if used in a product like the newly announced Fenix (aimed at ultra runners/hikers).  However, to date, Garmin’s focused their Chirp mostly on geocaching (its intended design).  With something like tōd, the more open nature of it means we might see some innovate endurance sports uses (though of course nothing is stopping people from doing that with the Chirp as a transmitter either).

The most popular Kickstarter project of all time.  Raised over $10,000,000US.  Crazy.  Pebble is designed to be a highly customizable watch platform, which developers can take advantage of and run with.  The key here for sports technology providers is being able to develop apps directly on the watch, versus having to just take the data uploaded from a Garmin/Timex/Polar unit.  We see this with RunKeeper already announcing support back in May as the first fitness app.  You may remember me talking about this type of model last September in the presentation I gave at the ANT+ Symposium.  Ultimately, companies like Garmin need to pay attention to allowing developers to develop apps on their platforms (i.e. a TrainingPeaks app directly on your Edge 800), otherwise the cell market will continue to slowly swallow them up (especially as water proofing and ruggedizing cell phones becomes more and more common).

But, you know what? I’m actually lukewarm on this particular Pebble model long term. Yes, I think it has tremendous short and potentially medium term potential – but this specific model is ultimately visually limited (and Apple has clearly taught us visuals matter).  All it would take is Apple allowing folks to develop Apps for the Nano, to significantly minimize the appeal of this device (with a platform already in color).  Plus, with a more structured and in-place app delivery channel.  Of course, perhaps I’ll be wrong, and that’d likely be a good thing.  Because I said before, more competition in the space leads to more innovation.

The very first Kickstarter project I backed, last fall.  Revolights are lights that clip to the inside of your wheel and illuminate the entire wheel frame, like you see in the photo above.  It can also detect braking as well as other motion, and adjust lights and patterns accordingly.  I think that potentially some number of years from now, you may see this as fairly standard on commuting bikes (not race bikes), but it’s gonna be a long while.

My interest in it was primarily from a safety standpoint, but also simply because I thought it was cool.  The project however has been delayed a bunch, and my personal guess is that the units will probably end up shipping nearly a year late (November 2012 instead of November 2011 as promised).  But, I can deal with that…cause it’s still cool.

I try and note new Kickstarter projects (and similar) in my weekly ‘Week in Review’ posts via the links I sprinkle about in that.  Or, you can also just check out my Kickstarter backer page from time to time.

Ultimately, I think that virtually all Kickstarter projects (even those that may end up being unsuccessful in funding) help to push the industry along, and to rethink the status quo.

Hope everyone has a great weekend!  Thanks for reading!