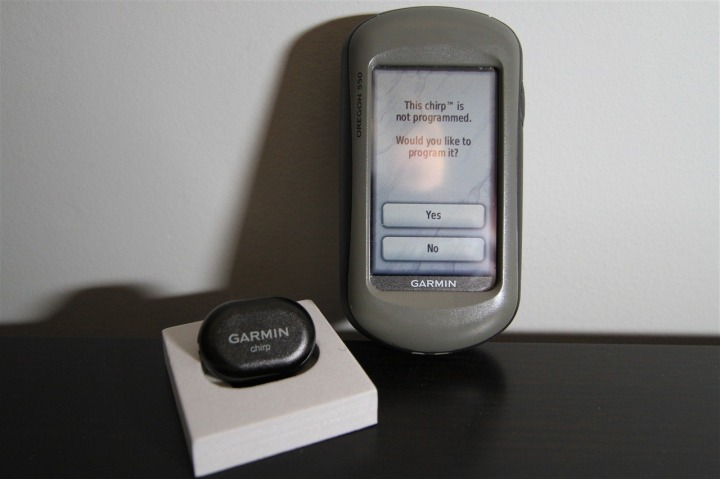 When Garmin announced their newest product – Chirp – last Friday, I’m fairly certain that a grand total of 3 people in the endurance sports world actually noticed.  After all, it’s targeted at the Geocaching folks (who are all abuzz about it) – not the sport fanatics running around in their swimsuits.  However, I think that’s somewhat short sighted, given the potential for creativity with the device.

But, before we get into how it could be used in the sport world, I want to give you a quick tour of how it’s supposed to be used in the Geocaching world – and how the device integration works.  Then we’ll talk about all the really cool things that could be added with existing ANT+ devices, such as the Garmin Forerunner, Garmin Edge and Timex Global Trainer – let alone all of the other ANT+ enabled devices such as Android phones and iPhone enabled apps.

Normal use on Garmin Devices

First up – the Chirp device itself.  From the outside, the unit is almost identical to the existing ANT+ Garmin foot-pods.  Except one key difference – instead of costing $80-100, it only costs $19.  Seriously, $19. 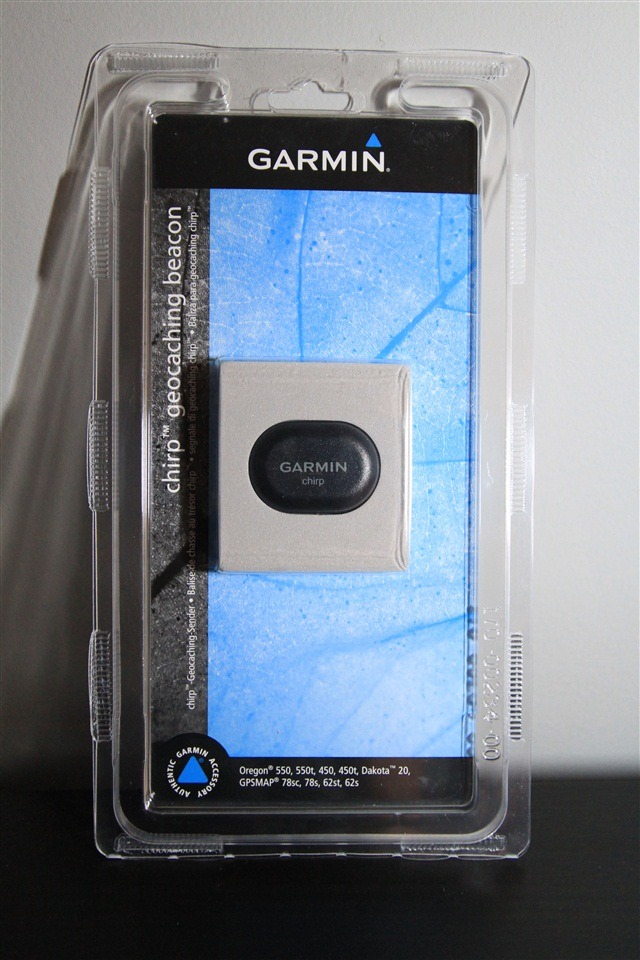 After you un-package it, you find almost nothing inside except the Chirp itself, a mini-manual, two pieces of Velcro, and a battery: 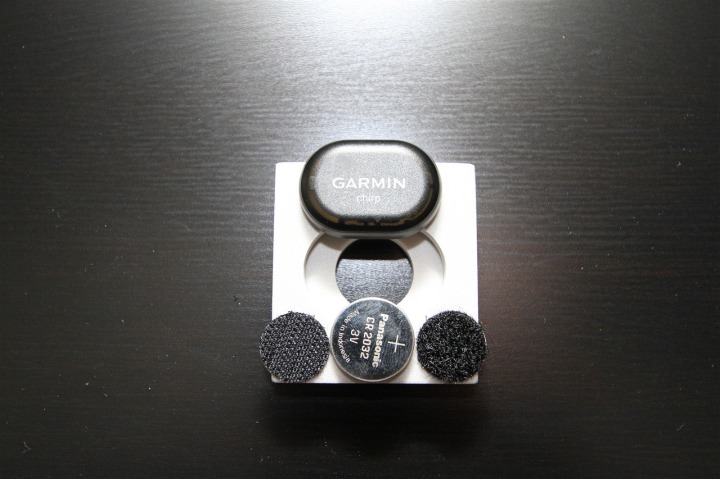 The chip itself is merely an ANT+ device that can record a few key bits of information.  It isn’t a GPS receiver – though it can record GPS coordinates if sent to the device.  Just wanted to make that clear.  Think of it as a digital piece of paper in a tiny little black package.

So with that, you have to utilize a Chirp-compatible device to get things up and cookin’.  I happened to have a Garmin Oregon 550 handy, and after a quick update of the firmware to support the new Chirp devices, I was all set to start setting things up: 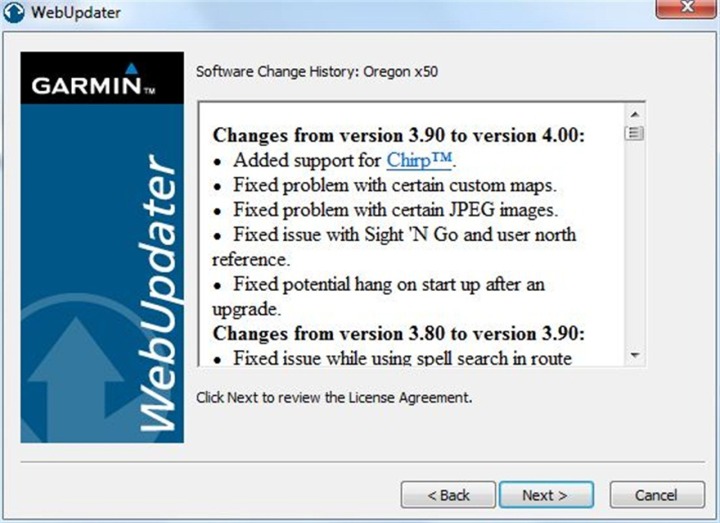 The first thing you’d do is wander into the Settings and then Geocaching menu, which allows you to then change the configuration for the Chirp: 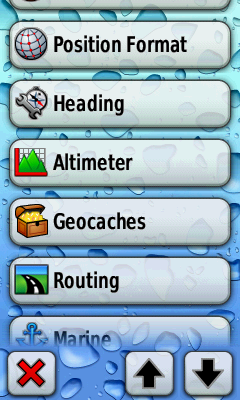 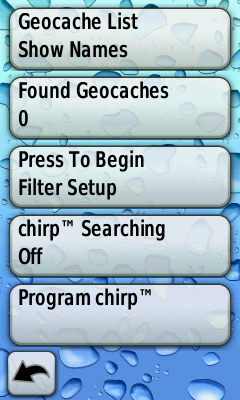 Once in there, you’ll set the device to start searching for its friend: 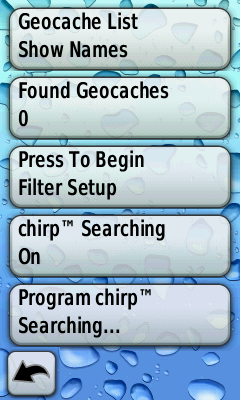 Assuming you remembered to put the batteries in the Chirp, a moment or two later it’ll find its little newborn friend and ask if you’d like to program it: 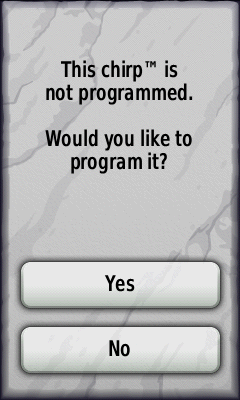 Which then brings you to the main page for the Chirp, where you can set the Chirp’s name, as well as a message to be sent, coordinates, and even the next waypoint. 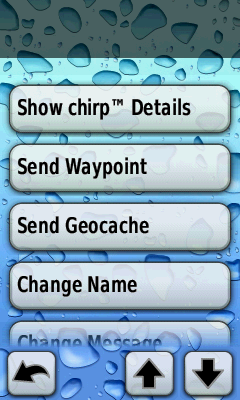 When you program the name, it’s all caps, and a bit short on length: 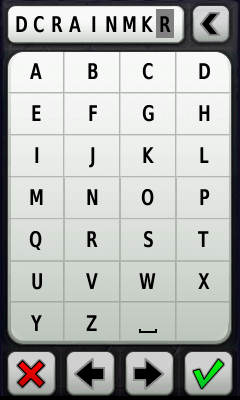 But, the message field allows you to enter in something far longer: 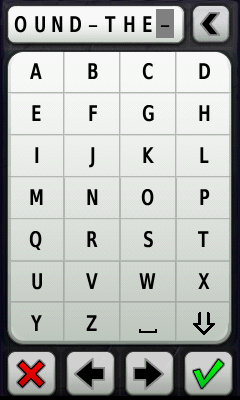 Once done, you’ll send it to the Chirp – all wirelessly via ANT+ of course: 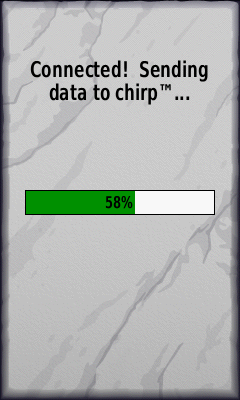 At which point, you can review your short message: 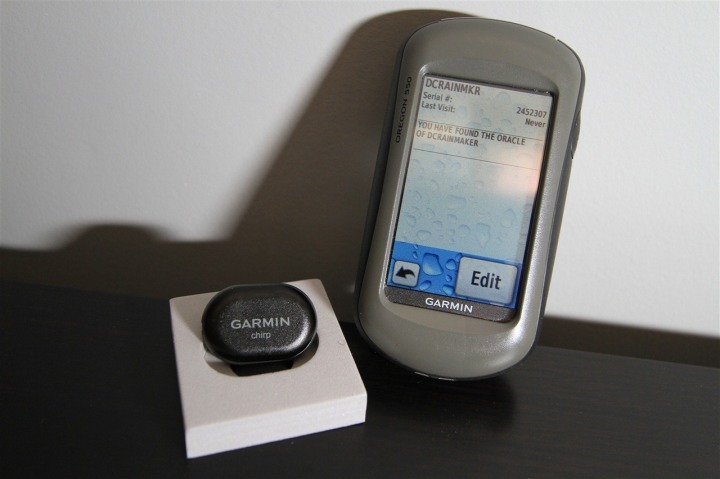 In order to keep others from benefiting if they stole the unit – the Chirps are locked to the original GPS unit ID that you programmed them with.  Though, if you have the original GPS device ID, you can change it or change ownership.  This acts as a deterrent to stealing the Chirp.  Also, because the Chirp is completely wireless and waterproof with a range of 10 meters (about 30 feet), that means you can easily hide it anywhere.  For example, in the below picture I have the Chirp simply located in a little tiny plastic baggie ziptied to the bottom of a tree.  But geocaching folks are far better hide and seek folks than I. 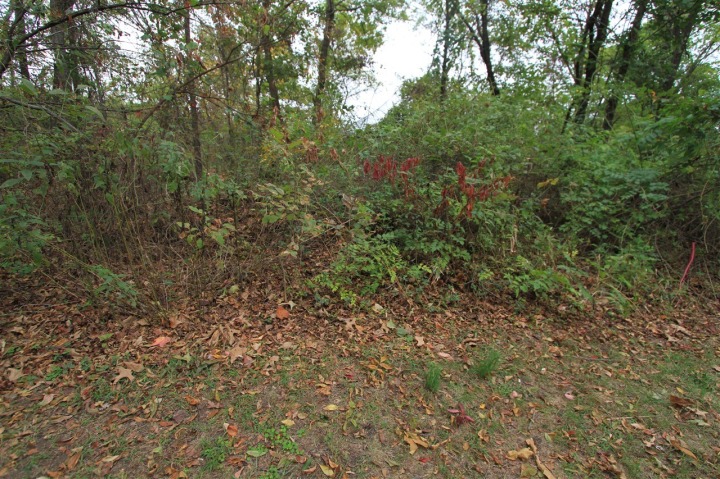 Finally, if you’re into geocaching, there’s a massive-long thread about the Chirp here, and as to whether or not one of the major Geocaching sites will be supporting it.  Interesting viewpoints, though a lot of incorrect technical statements sprinkled about in there…so beware.

It should be noted that the Chirp device – while made by Garmin, could be utilized by any ANT+ device if the firmware was updated to talk with it.  The Chirp device operates via ANT+ using the newly created ANT+ Geocache Node Device Profile, which is available and accessible to all ANT+ members (hundreds of companies).  The current Geocache Device Node Profile is in Alpha state from an engineering standpoint, but is moving through the finalizing stages.  Nonetheless, at this point, any ANT+ vendor could take advantage of it – just like any ANT+ vendor could use a speed/cadence sensor device profile.  In other words, there’s in theory nothing stopping anybody from developing an iPhone app or Android app that could operate with it.

I confirmed with the folks at ANT that his is indeed using the Geocache Node profile.  The profile is currently in Alpha form, but is essentially “about 2 days of work and a conference call“ away from being in beta form and sent out to members.  The profile details are however available today to any ANT+ alliance member that wants to start development against it.

Here were two slides that were presented at the ANT+ Alliance Symposium a few weeks ago that I attended…these are re-posted with permission of the ANT folks: 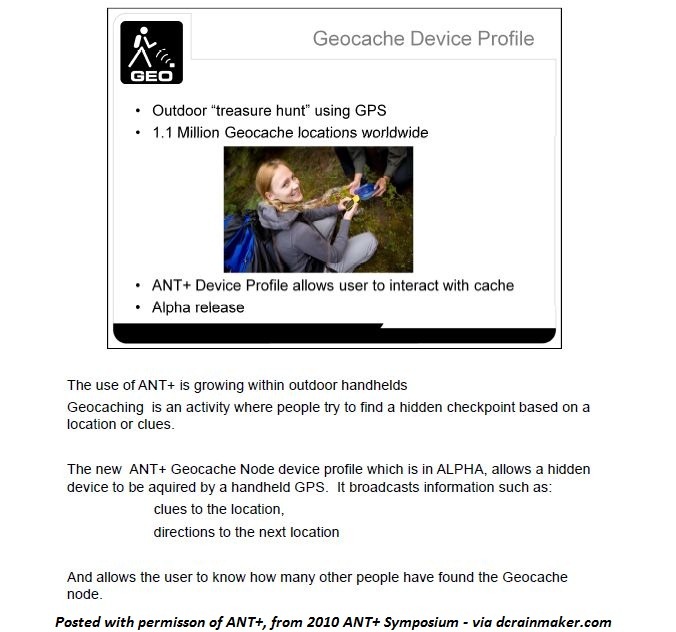 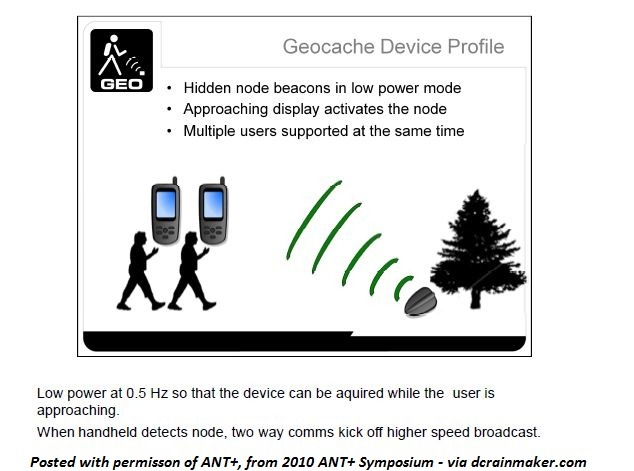 Also, the Chirp device is a bit different from normal ANT+ devices like footpods or HR straps, because of how it goes into a sleep mode.  The device operates by broadcasting at a slower interval while in sleep mode, but once a user comes by, it shifts to broadcasting much more continuously.

Now…starting to bring this post back to the world of sports, let’s compare how virtually identical the Chirp is to the much more expensive footpod:

Almost all of the part numbers line up, even so much as the little cutouts in the plastic for the shoe mount, which would serve no purpose on the Chirp since it doesn’t include a mount…though I don’t quite want to trash one of my existing $70 foot-pods to find out if they are indeed the same parts under the covers.  In theory, the foot pod would also have the accelerometer inside it, which the Chirp wouldn’t need – but I could see how from a device manufacturing standpoint that part may be pennies and just easier to simply sell a different case with a minor firmware tweak.

Now, my site is about endurance sports – not geocaching.  So let’s talk about why I think this is exciting to me…or rather, some of you.  Today, when you look at how timing and competitor validation is done in endurance sports it tends to be a hodgepodge of technology.  For some on-road races they’ll have setup a system that allows a few splits to be recorded, in addition to performing verification of the athlete hitting a certain course marker.  Essentially – proving via normal RFID/RF chips/tags that you’ve got to the turnaround point or course point.

The challenge with these timing systems is they’re incredibly expensive.  But a $20 Chirp device…not so much.

For example, in a typical 100-mile Running Race, what if athletes wearing compatible ANT+ devices would automatically be chirped at as they hit various trail markers along the way. 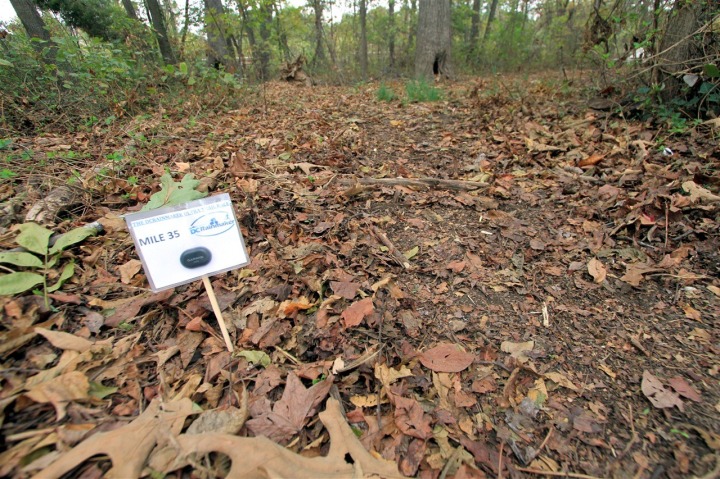 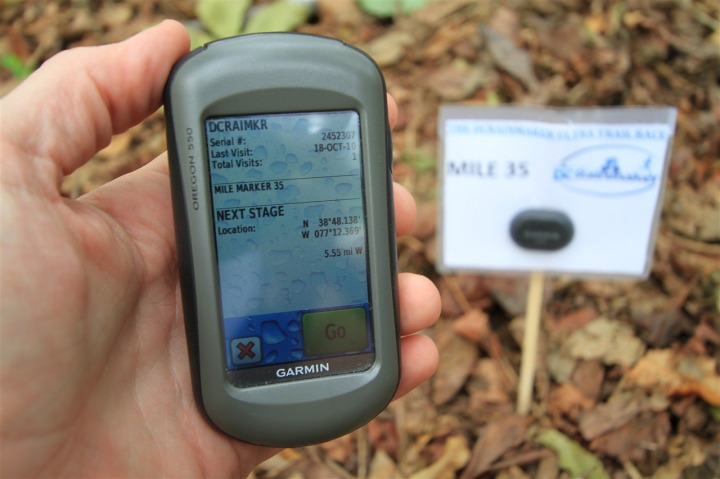 With their watch notifying them that they’re still on course…and even giving them details until the next waypoint, like above.  The above information could easily be condensed down to fit on a typical Forerunner or Edge screen if those devices were to be updated to support the Chirp.  From an ANT+ perspective, there’s no technical blocker, just a firmware update that would need to occur.

Further, what if those exact waypoints and points were then recorded on their watch.  So, as a competitor passed mile marker 35 (within 10 meters), the Forerunner watch (or other compatible device) could then record mile marker 35 being passed at 12:08:32PM.  Time is automatically set via satellites on all GPS based devices, making it a far more accurate method than a simple stopwatch being held by a volunteer. 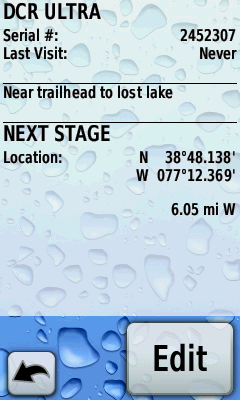 Then, at the end of the race, a competitor could easily download a list of all Chirp points passed with exact distance splits based on the course (which we all know can vary from real life measurements).  This data could also then be downloaded as well to a central race system – though a bit more thought would need to be nailed down there.  However, it could be as simple as races providing compatible watches – like say a modified Garmin FR110, FR60 or even FR210.

Now, what I described isn’t going to be the end-all-be-all of how the technology could be used.  It’s just a start of some random examples that aren’t yet fully thought out.  With time, and creativity (which is what so many of you out there have) – I suspect there could be tons of really interesting and innovative ideas put together on how to use these relatively cheap devices.

So, now I turn to you – what ideas do you have on how these could be used in endurance sports or similar applications?  I assure you…folks are watching – looking for ways to take advantage of the technology and move it to the next level…so all ideas are always good!