My 24 hour trip to the ANT+ Symposium

As many of you know, I was invited to speak at the ANT+ Symposium held yesterday about an hour outside of Calgary, Alberta in small ski & golf resort village and town of Kananaskis (no, I can’t pronounce it, and when I tried – locals just laughed at me).  The Symposium is held annually and offers a place for some of the 300+ companies that make up the ANT+ alliance to come together and plan and hear the future of ANT+, as well as meet amongst themselves around product concepts and development.

From a ‘who’s who’ standpoint, all the big names are here: Timex, Garmin, Saris, Texas Instruments…but it’s also an opportunity for up and coming companies as well, many you probably haven’t even heard of yet: Lap View, Mio, and 4iiii to name just a few.  As well as all the ones that you know and love today: Quarq, MapMyFitness, Addidas, Wahoo, Brim Brothers, etc…

ANT+ invited me to come out and speak on the topic of ‘The Athletes Digital Life’ – to give the over 100 attendees the perspective of not only an athlete that users their products daily – but also one to extensively reviews them as well.  While they did cover my expenses related to the trip, they asked me to share with the group my experiences across the board, as well as convey what I hear from you on a daily basis.  They didn’t want just an ANT+ picture – but rather wanted to understand the landscape as a whole.

So here’s my recap…a trip report of sorts, sorta like a race report – except without any blood or crashes. 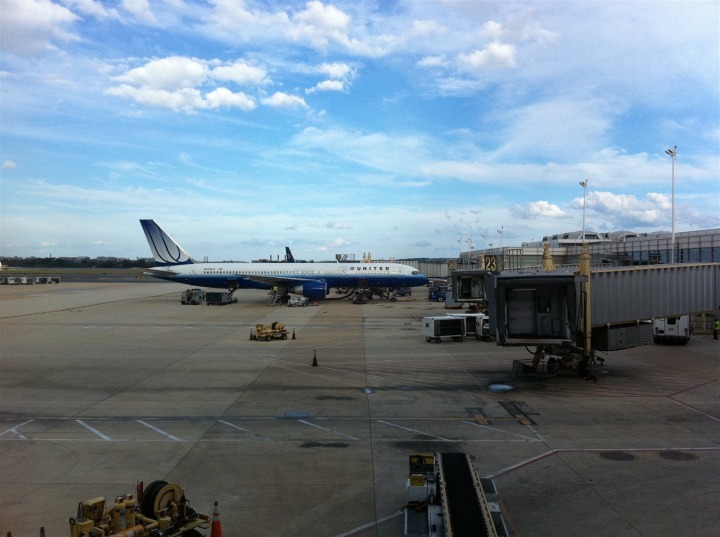 I flew out late Tuesday evening, and landed just prior to midnight – though it would be nearly 2AM by time I’d arrived at the secret mountainous hideaway location (which thankfully freeway signs clearly pointed to).  I was also thankful to avoid the numerous deer that kept on trying to attack my car, though the moose stayed to the side of the road.

While I had pondered doing a morning run at 6AM, once I opened my rental car door up I found out just how cold it was up there.  Yikes, not t-shirt and shorts running weather at 6AM!  Plus, I needed the sleep.  So I aimed for 8AM wakeup instead. 🙂

Wednesday morning brought an 8:30AM session covering a number of different technical topics from ANT+ semiconductor overviews, to how device profiles work within the ANT+ protocol.  But, the real reason I was here was to present my session at 10:15AM. 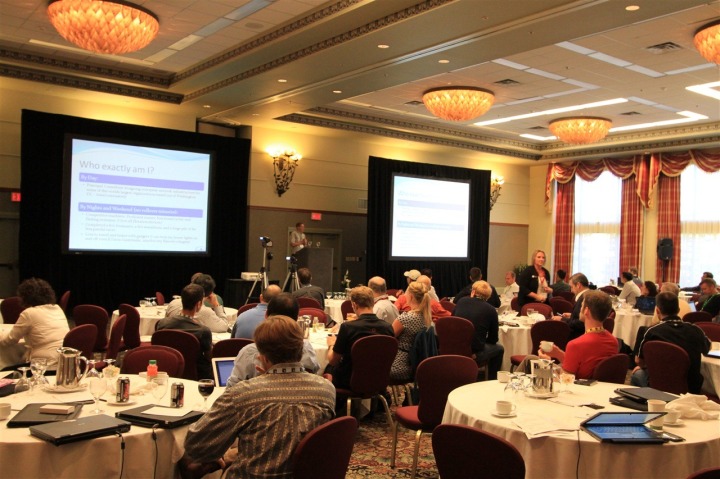 (That’s me, above, giving my session!)

A lot of you asked if I was going to record it and make it available…and thus…ask, and you shall receive.

You can watch it right here in a nifty little window below:

***Note: Video will be uploaded soon, just working on some bandwidth limitations***

Alternatively, if you’d like to simply download my slide deck – which I should note is nowhere as exciting as me talking – it’s here in PDF format.

From both my perspective, as well as that of a number of people – the presentation went quite well and I was excited to give not only my opinion – but really all of yours.  After all, I was here to convey what folks are looking for in sports technology products – and who better to know that then all the feedback you’ve given over the past few years.  I was also asked in the afternoon to briefly discuss a bit on social networking and sports marketing…which was just basically me rambling off the top of my head.

The rest of the day was quite honestly a complete whirlwind.  I was tag-teamed by company after company for private sidebars and meetings to discuss various topics.  Attempts to get to the bathroom meant I was stopped just about every 3-4 feet by someone else looking to chat.  Next year I’m just going to take diapers.

I spent dedicated time with every company I mentioned at the beginning discussing either future product plans or past product experience.  All in all, it was incredibly productive – both for me, and for them.  I was literally having meetings with folks until 10:15PM, less than two hours before my flight (over an hour away I might add…).

I even got to play with one of the first soon-to-be-publically available ANT+ enabled (yes, firmware and all) phones.  Check out the below pics showing it picking up a few ANT+ sensors that are out there. 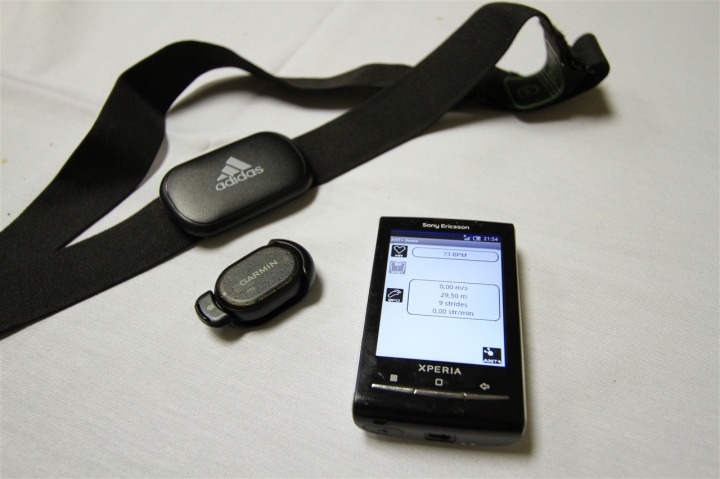 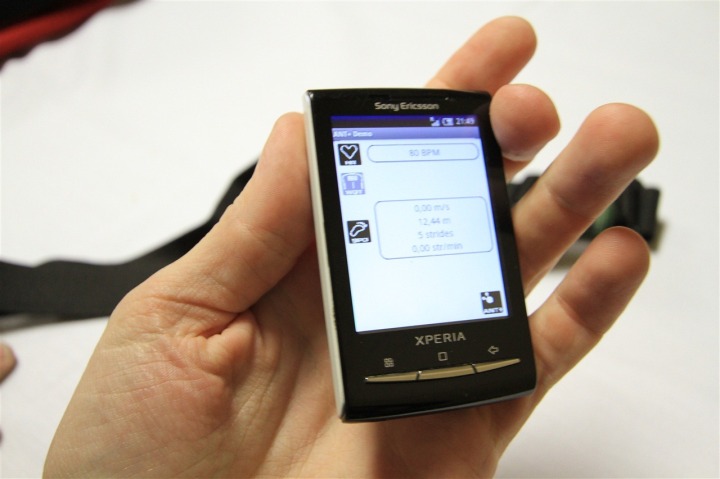 The phone is the Sony Ericsson Xperia X10 Mini (Android), which should be available an an undetermined carrier near you in the next few months.  Yes, the platform will allow 3rd party developers to take advantage of the ANT+ chipset right from the start.  It’ll also be the start of a family of devices, for example the X10 Mini Pro, which has a built-in keyboard.

Also, on the 4iiii heads up display front, I had a good chat with them and should have some working product in my hands very shortly to check out.

One area that I outlined for a number of companies last night was what levels of product testing and/or review I get involved with.  I can best summarize it in the following three groups:

1) The first is products that are out and available on the market today that you can go and buy today (i.e. – a review of the FitBit for example).  You as blog readers see these most visibly.

2) The second is products that are publically announced by vendors, but not yet publically available.  An example being the Garmin Edge 800, I have one but it doesn’t release publically until November.  You as blog readers see these as well.

3A) The first portion of this last one is products which are in the prototype phase but not yet publically announced that they want NDA (non-disclosure agreement) type feedback on, but don’t want made publically quite yet.  They may be 1 day, 1 month or 1 year away from product release.  Eventually these products make their way to the category 2 above.

3B) Finally, the last portion is products that are purely in the conceptual stage or early prototype stage where they are looking for feedback on market validation and/or thoughts on direction.  These products may or may not ever see the light of day (or even be made), but ideally they eventually get to category 3A or 2 above.

The goal of what I do is primarily to act as both a sounding board, but also as a athlete advocate for what you all want in products.  I attempt to do this via the three-point-five groups above.

While there certainly many technical announcements that were made (open-sourcing ANT+ for example and announcement of combined ANT+/BT chipsets, just to name a few) – I wanted to touch on how impressed I was at the coordination and dedication of everyone there.  I spend a LOT of time with techy groups for work, and also a LOT of time at various conferences, symposiums, ‘off-sites’, and things of the lot.  I’ve never seen such a well organized and well run summit before.  I was pretty amazed that even though it was Day 3 of the symposium when I arrived – everyone was just as engaged as you’d expect to see on the morning of Day 1.

I was also impressed to see the level of collaboration between companies.  People here legitimately wanted what was ‘best for the goose’.  I think some of it comes from the fact that if you peeled away their company names and titles, most everyone is an athlete of some sort.  Everyone shares a common bond – whether it be a product designer of 10 years from Garmin – or the same from Timex.

So I was impressed there with that aspect.  Plus, I’m really excited about many of the products that will be coming out over the next year – from all of the parties mentioned in this post.  Garmin best probably summed it up in our sidebar when they said: “Hopefully you have a lot of time next year…’cause we’re gonna be releasing a lot of awesome products.” – but Timex echoed the same sentiment as well.  To be clear however, I don’t have any specifics on either of those at this time (beyond what I posted in the Timex interview).

I was also impressed at how well this lot partied.  Not ‘drunk partied’, but just simply a good relatively clean time.  While I missed the horseback riding of the previous night, I did get to partake in a bit of put-put golf, mini-pool golf and golf-ball spoon races.  All with the spectacular backdrops of the mountains right outside Banff. 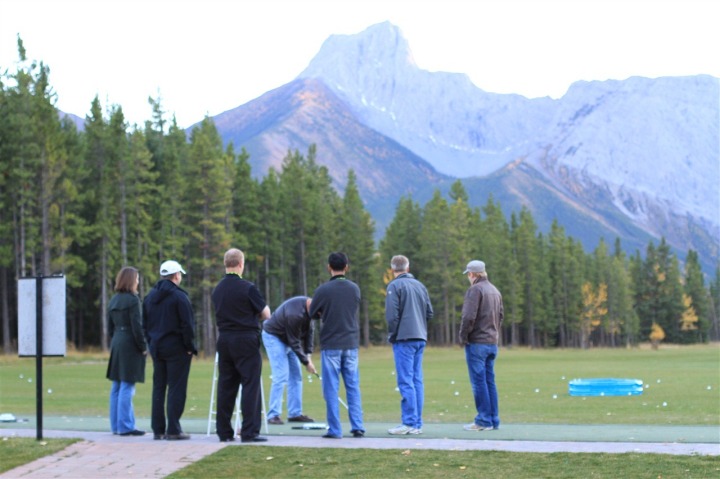 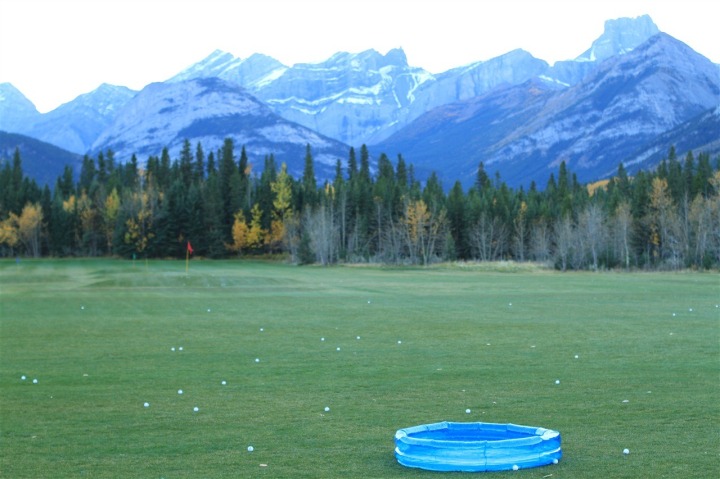 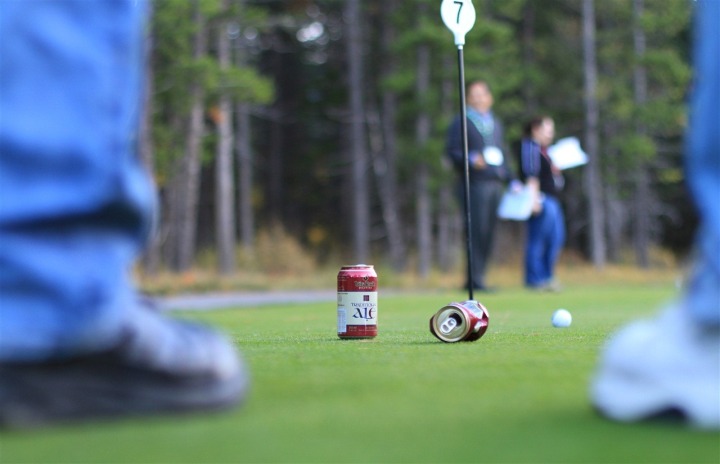 I nearly forgot to mention late-afternoon before the put-put, I got to get in an amazing run outdoors doing about 7 miles worth of mile-ish intervals. 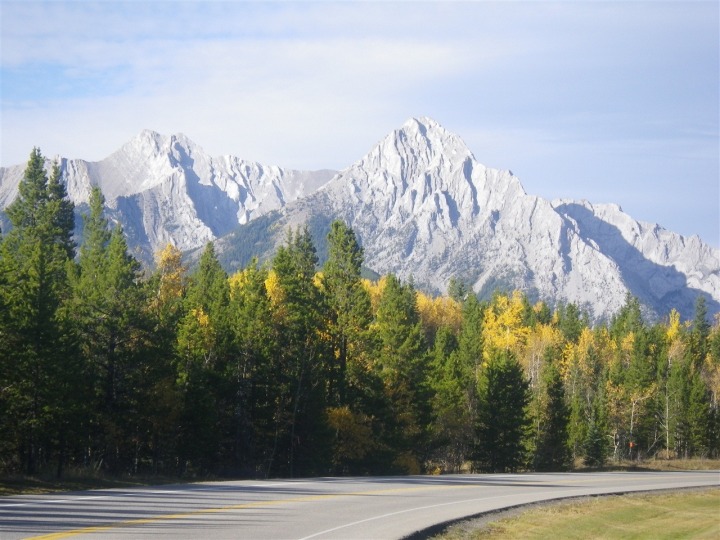 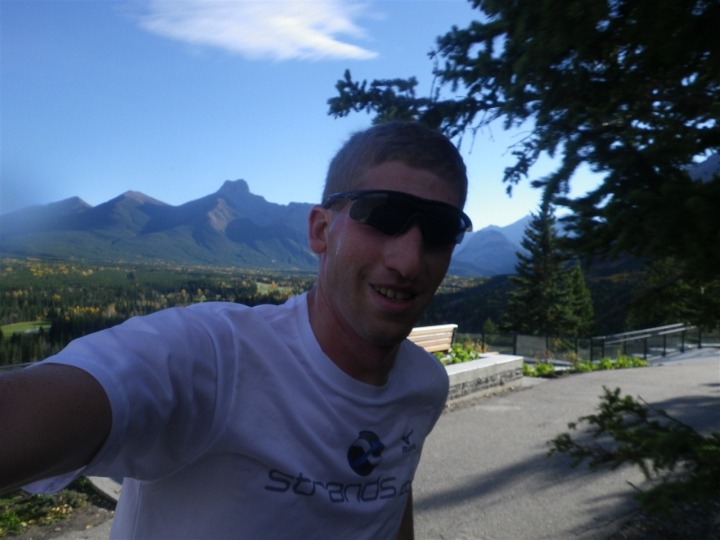 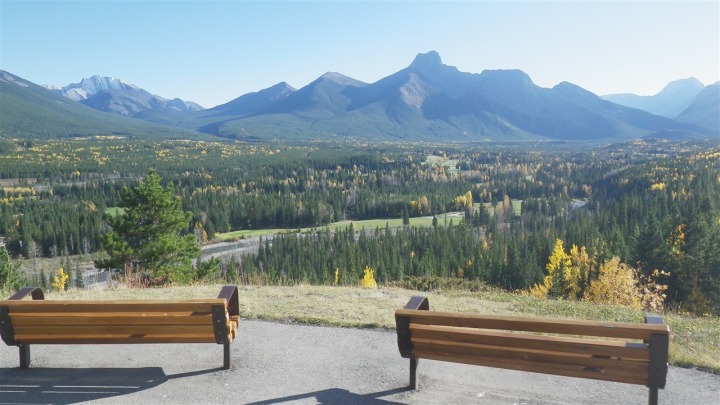 Plus, I nearly ran over a dear while running.  I was quite literally admiring the views and mountains around me when I came within maybe 6-8” of broadsiding a dear just standing there on the path.  Luckily he sidestepped out of the way before I ran straight into him.  He then turned around and gave me an annoyed look that simply said: “Really?!?” 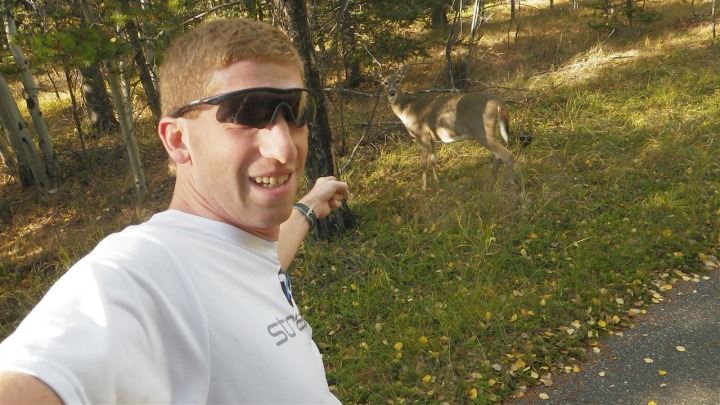 I was moving along pretty well at about 6:08/mile for the interval portion  – but thought it was odd I was working a bit harder than I expected.  It didn’t occur to me how high up I was until afterwards…turns out 5,000 ft!  Dang! 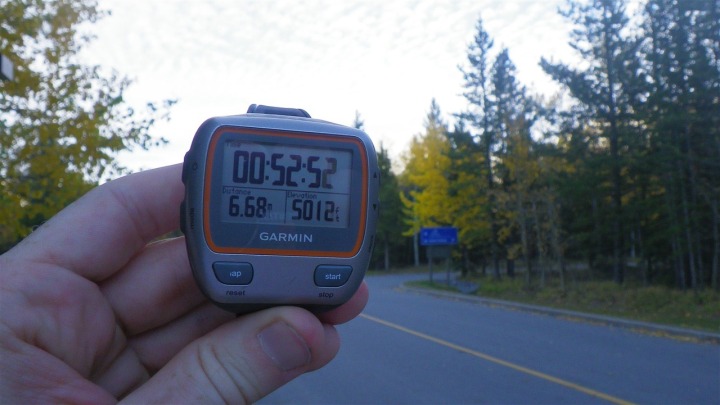 So with that, I boarded a plane that departed at 12:05AM – just a hair over 24 hours later…onto my next destination I go!

P.S. – I can now take credit for giving cycling legend Greg LeMond bunny ears in a photo…that will soon be posted…