My second week up in Newfoundland was almost as busy as the first, despite the fact that this time we didn’t attempt to drive around the island.  Instead, we focused on things that were local – and just generally enjoying the time to relax.

Speaking of Newfoundland, it’s probably a good time to teach ya’ll how to pronounce it – which is exactly like the poster in the bathroom says below: 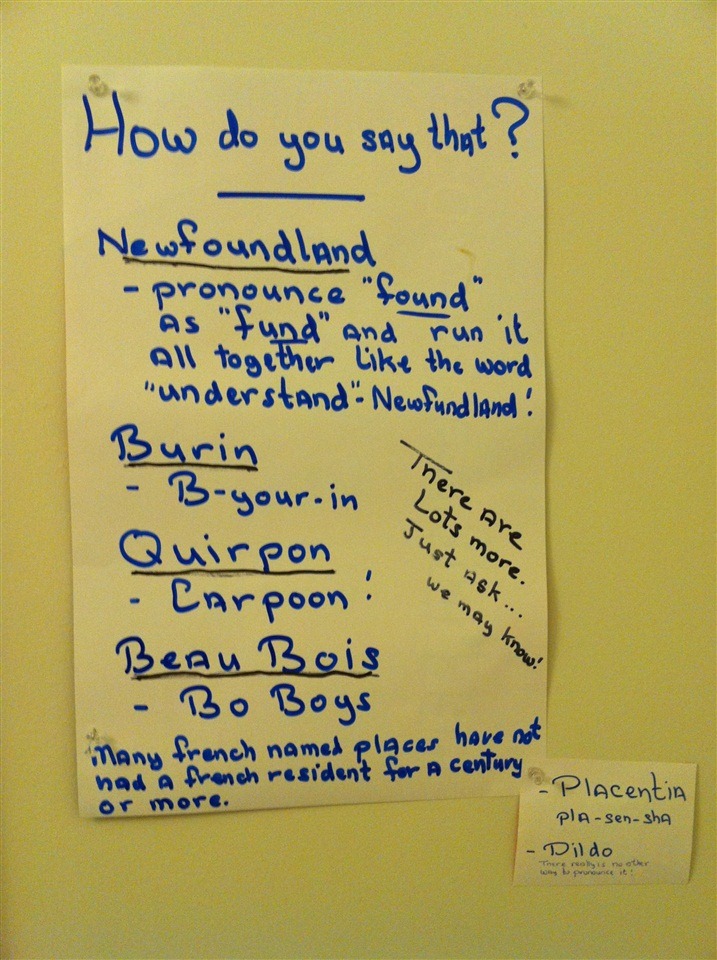 While you may think that your average Canadian talks funny, they don’t got nuttin’ on Newfies.  Newfies talk like a Texas Leprechaun.  Since much of the ancestorory here is Irish – many sayings are Irish, and you probably couldn’t tell the difference between them and an Irish lad if ya put them side by side and they both started talking.

And if there’s one thing that every Newfie talks about it’s fish & chips…well, that and moose.

Fish and chips are just about a staple around here, so it was only natural to get directions to the best spot in St. John’s and give it a whirl. 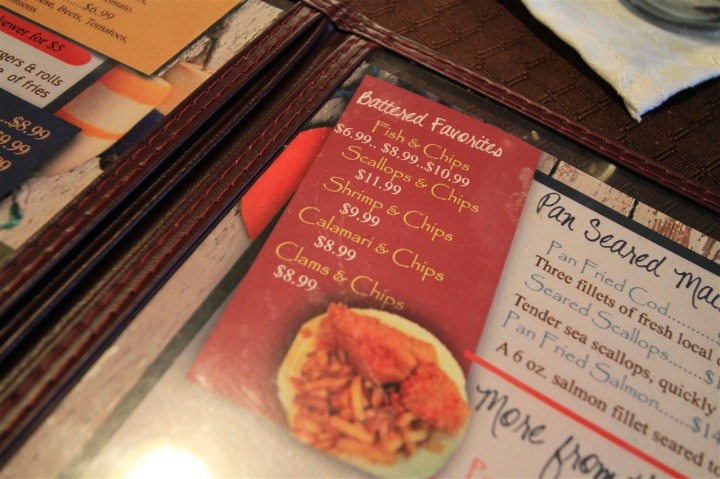 And…I’m not typically a fish and chips type person, but I rather enjoyed it. 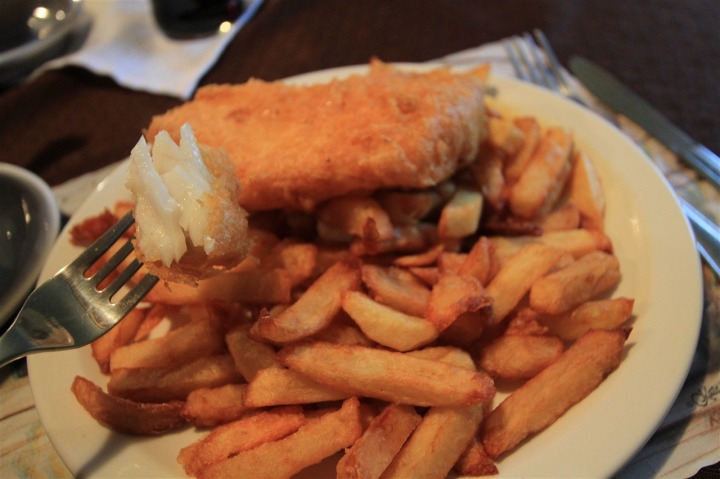 In addition to the fish and chips, they had moose soup!  Yup, poor Bullwinkle went for a swim with the carrots. 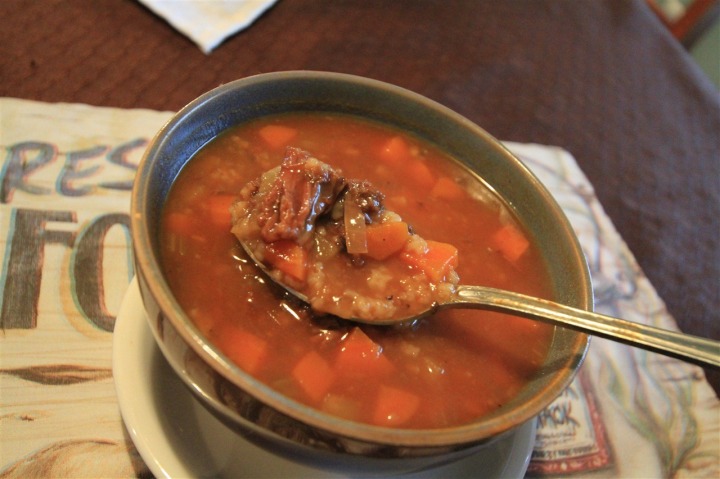 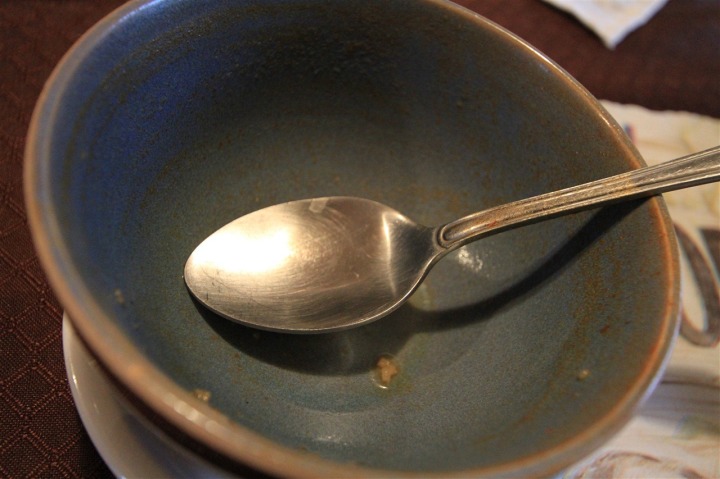 It so happens that both The Girl’s parents are rather good cooks, and one night her Dad cooked up a distinctively moose meal… 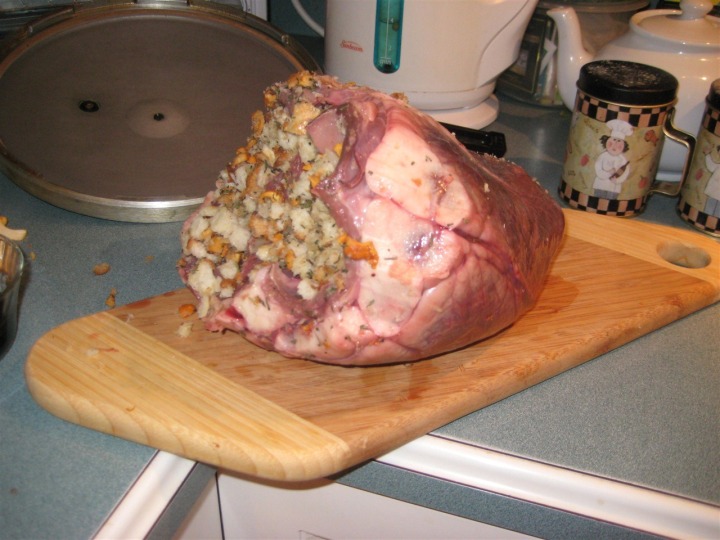 But that just wasn’t any moose meat…but rather moose heart.  Complete with stuffing…just like a turkey!  You’ve also gotta understand this thing is about the size of a soccer ball.  Just massive.

Sorta tasted like…well…beef-ish, but then a hint of something else as well.  I was never very good at understanding the wine tasting notes, and thus I’m not very good at recreating moose-tasting notes either.  So we’ll just go with beef-ish. 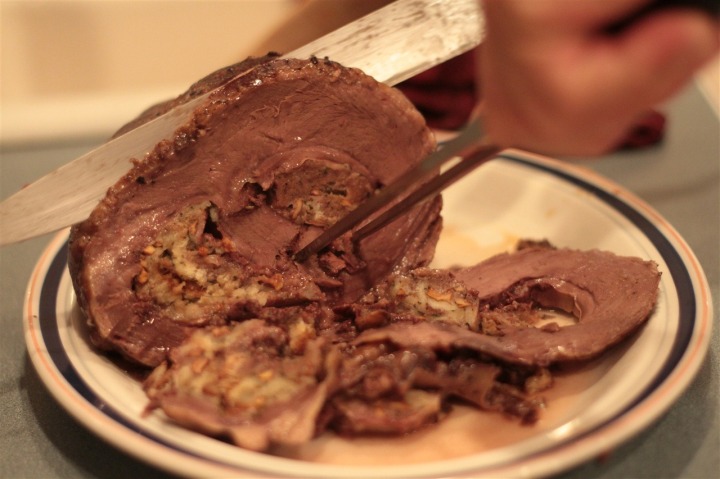 But…it was good, and he made an amazing gravy using chanterelles that he went out into the woods and picked himself.  Good stuff! 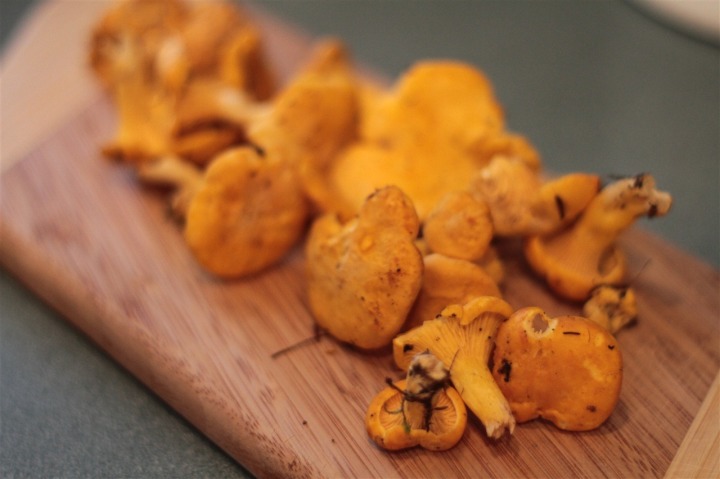 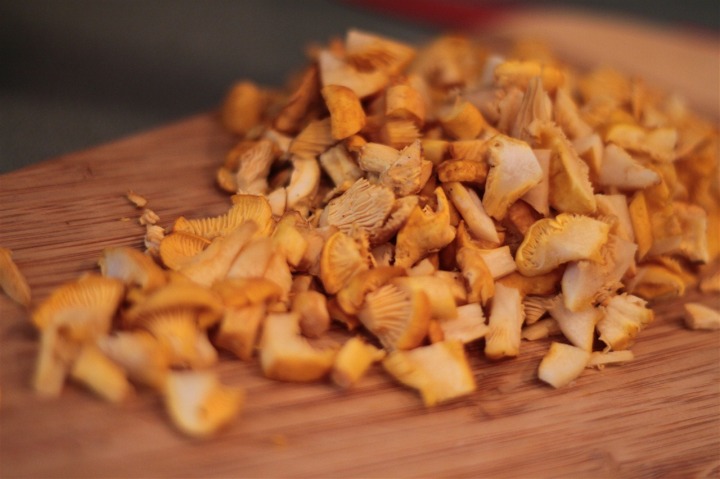 Speaking of going outdoors…we went on a Whale Watching boat ride.  Normally, if it was a bit earlier in the summer, it’d be whales and icebergs – but this year there were virtually no icebergs…sorta weird.  So, no big ice cubes for me.

But, whales there were…well…in theory anyway.  A few nights prior we saw them just off the coast from our campsite, so we hoped we’d be able to get up close.  Plus, this very boat and guide just two days prior caught a rare and virtually unheard of act where a pack of Orca Whales attacked and made dinner of a Minke whale.  Thus, off onto the boat we went: 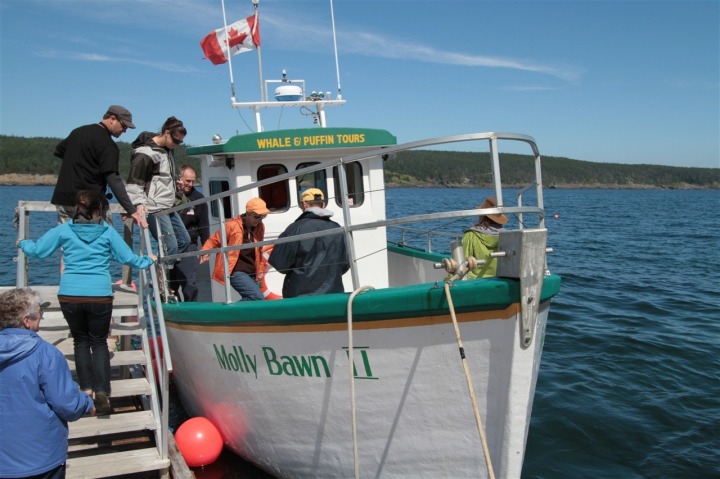 However, after a three hour tour (ok, a 90 minute tour), there were no whales to be found.  Just us…and a lot of water. 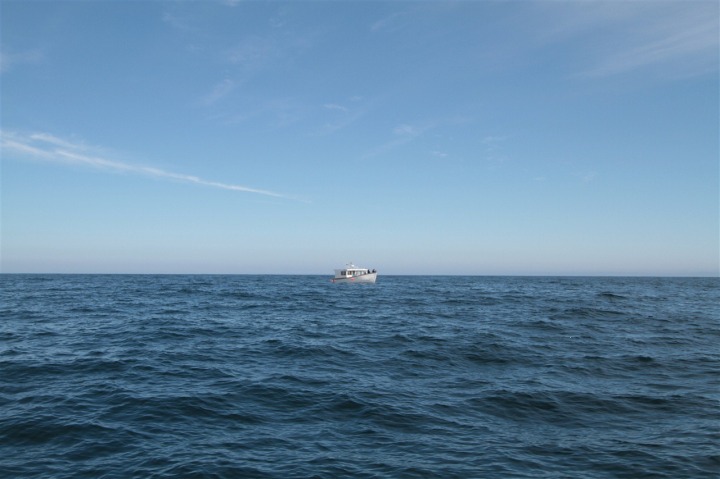 To pass the time I played with the Oregon 550 that I’m working on a review on.  I pondered whether or not tossing someone overboard would attract the whales.  Cause that clearly would seem worth it (from my perspective anyway).  Additionally, I’d be able to test out the Man Overboard feature… 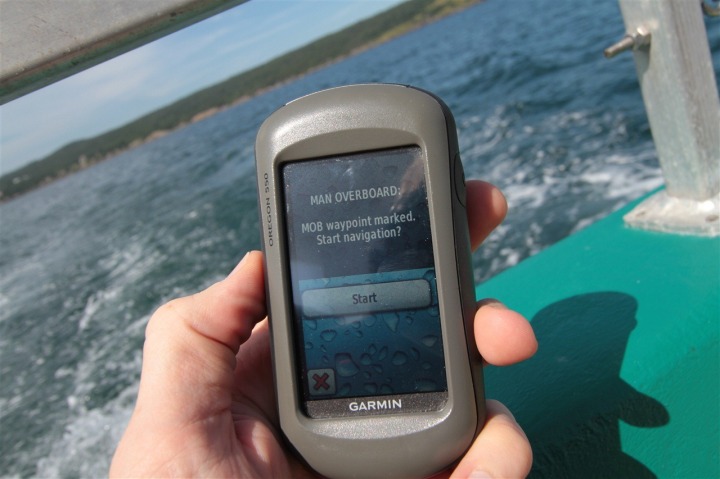 On the bright side, we did see a bunch of puffins and seagulls. 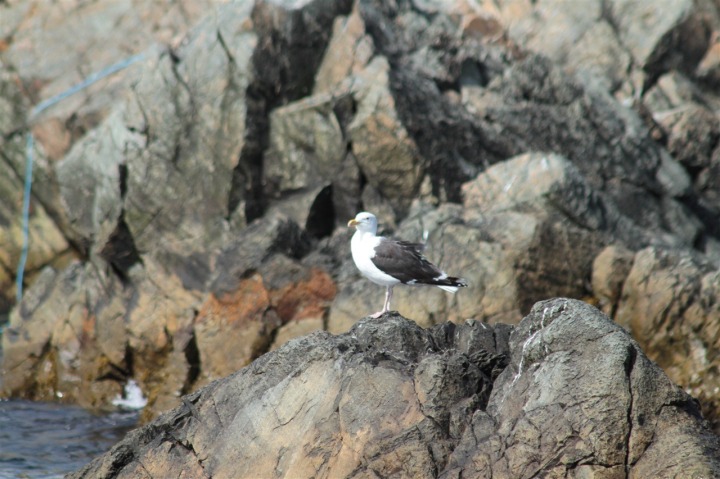 Given our lack of animal success, we decided to aim for something that wouldn’t move – a light house.

Unfortunately, the only thing left to move – the weather – came on in as we arrived at the Cape and dumped on us.  Even thunder and lightening – also not common here.

So what’s the one thing you do to try and salvage some otherwise blah shots due to poor weather (albeit amazing scenery) and make them look really fancy?  Black and white mode baby!

Cape Spear is the most easterly point in North America (Translation: Best place to try to swim to England), and on it there’s been a lighthouse for nearly 200 years.  Here be the lighthouse…lighting up no less: 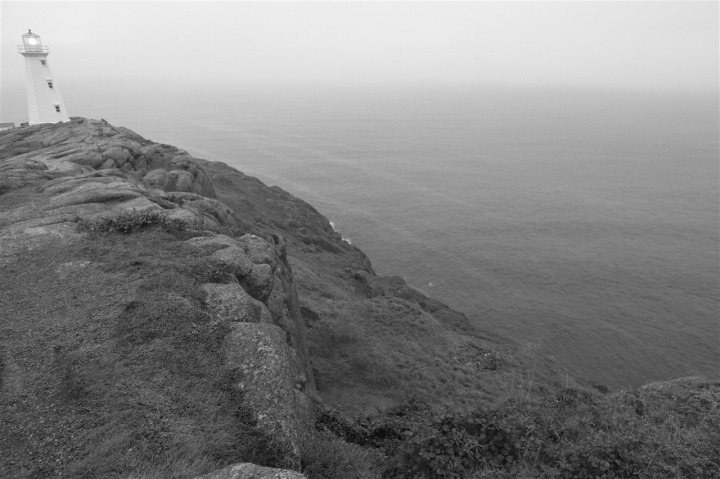 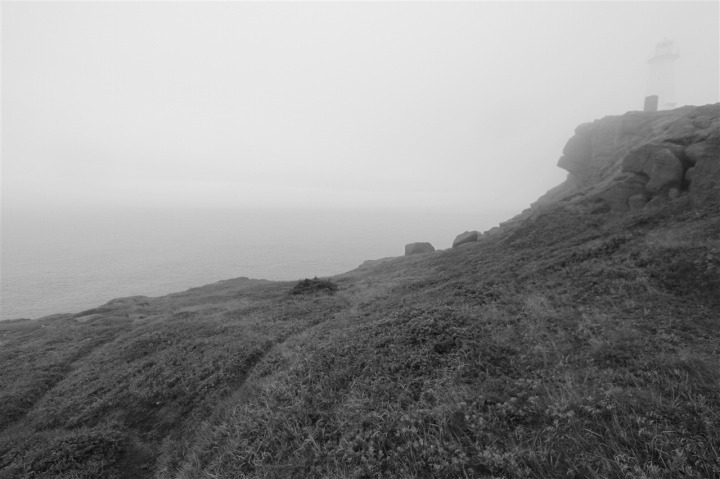 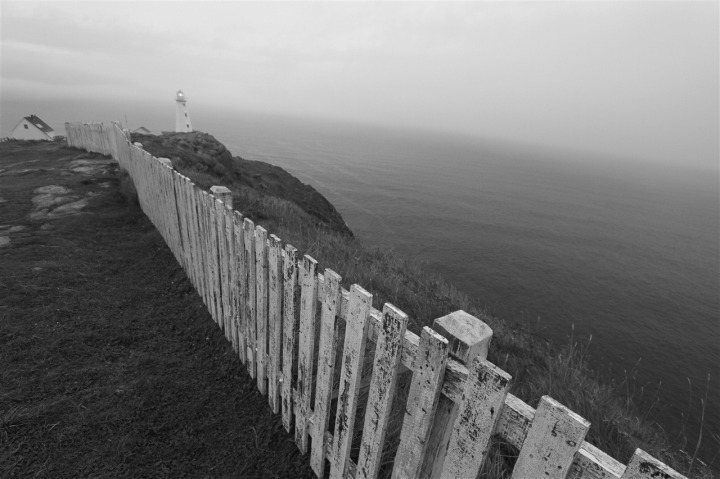 After we were fully soaked, we pretty much went back to laziness (relaxing) mode…which is just perfect in my book.

My two week trip up there was amazing and I can’t wait to go back again in a few months.  The scenery is awesome, and the people are super friendly…even if you can’t understand what on earth they’re saying half the time.

I arrived back in the US yesterday and am all set and ready to resume full training mode (though regrettably without The Girl’s Mom’s fresh cooked brownies…). Enjoy your weekend!