An interview with Barry Redmond of Brim Brothers

Last week while at Interbike I had the chance to sit down with Barry Redmond of Brim Brothers and talk about where they as a company stood in their quest to develop a cleat based power meter.  There’s of course been a whole lot of talk lately about power meters in the general vicinity of the foot.

Thus…effectively…leaving the guys at Brim Brothers as the last one to speak.  So…speak we did.  Here’s a recap of our nearly hour long conversation. 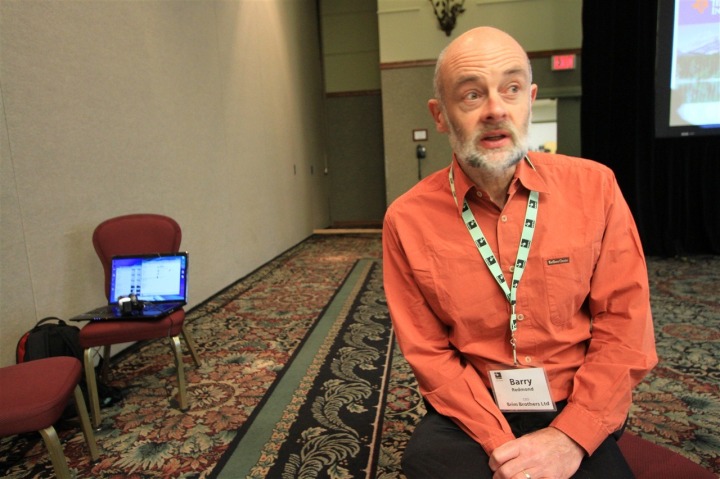 Barry originally got into power meter design back a few years ago merely as a way for him to “scratch my own itch”.  He was out cycling with a bunch of regular riding partners when he realized that nothing on the market really fit what he was looking for – nor offered a versatile solution that fit the many different cycling genres.

So…he did what all engineers do: Built his own.

Let’s start with where the system is based – which is the cleat.  What’s the cleat? Well, that’s the part that’s screwed to the bottom of your cycling shoe.  It’s this piece that snaps into your pedals (and snaps out when you crash).  So, in this respect, it’s different than the pedal based power meters of Garmin and Polar – even if only by a few centimeters.

Now, there isn’t one particular type/manufacture of pedal cleat that they’ve decided to use (as there are a number).  In fact, in his testing it works with all the mainstream ones – though he noted that the egg beater types make it more difficult to pack everything in – but not impossible.

In in the cleat design, the force sensors have to fit fully within the cleat on the bottom of the shoe, which allows the system to measure the riders output without strain gauges.  This is key because it also makes the system less susceptible to temperature drift or aging of the gauges.

In the current prototypes the cleat then connects via a small wire to a tiny box that’s located on the top of the shoe – not unlike that of a running cadence sensor today. You can see a bit of this overall design in the image from them below (sorry it’s super small), including the wire slinking around the edge of the shoe:

Barry had a engineering prototype of the top box in his bag (actually, he had all sorts of prototype goodness in his bag, but was guarding it like nuclear weaponry).  Though he wanted to be super-clear that this is simply an ugly box, and that a finished product would be far smaller and more elegant. 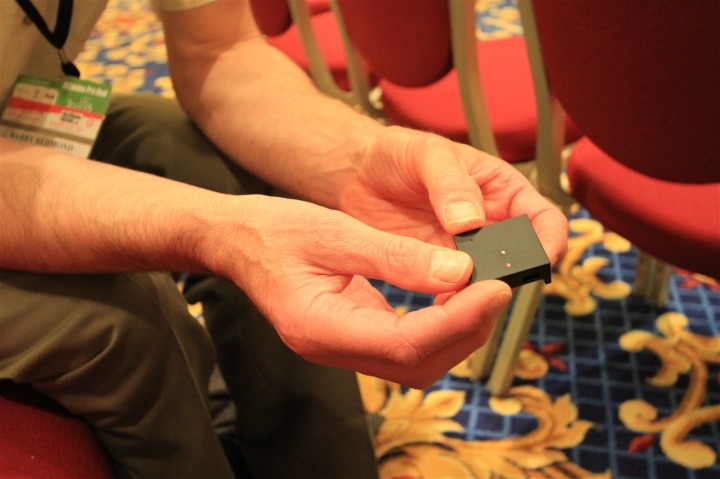 I asked how the shoe-wire system works in the real world.  He said it was actually better than they expected – but that he understood the need to really flesh out that part of the design for durability.  I asked if wireless between the clean and the shoe box was possible, and he said it’s something they’re looking into.  The major issue is really the battery to run the system.  With this design, the top box is rechargeable, which then drives the power required by the cleat.  The current system is getting about 15-20 hours of battery life per charge.

Details around calibration and measurements:

One of the advantages of a cleat or pedal based system is the ability for it to measure numerous forces that the rider exerts – such as Left/Right power, torque, cadence, angle of pedal, force for the inside of the pedal versus the outside of the pedal, etc… While some of these wouldn’t necessarily be useful for the ‘home user’ – some could be used in lab environments looking at aspects such as bike fit.

One of the areas that Barry is pretty adamant about is that “The system should adapt to the person, and not the person adapting to the system”.  To that end, the system doesn’t require any end user calibration beyond the initial factory calibration.  I then asked about the ability to zero the system or otherwise reset it to account for any changes in the bike/rider/system setup and he said that at this point it shouldn’t be required, but remained open to the possibility down the road.  It’s also important to note that the system is measuring and re-measuring it’s state, position and configuration every few milliseconds, not every few hundred milliseconds as has been noted everywhere.  For those not familiar with milliseconds, 1,000 milliseconds = 1 second.

One area he used as an example of this was crank length.  He pointed out that if you look at the Look/Polar pedal design, they require the user to set via a small switch on the side of the unit the crank length.  In the Brim Brothers product, this isn’t required – as it’s automatically computed.  Same goes for cadence – unlike the Polar/Look system, this doesn’t require the use of any magnets.

Finally, the system is based on ANT+.  This is due to a variety of reasons.  He said when they were first looking at protocols it offered the cheapest and easiest path forward.  He said development of their own protocol would have required significant investment – not only on the transmitter side, but also then developing a head unit for the power meter.  His main point could be summed with his comment that “There was no point to re-inventing the wheel”.  He also noted that they’ve found the ANT+ technical team “very knowledgeable and extremely eager to engage” – which is something I’ve heard from a few other ANT+ vendors as well.

Where they stand today:

Of course, the next logical question one has to ask is where they stand today on the road to market.  I started with the simple: Can you go out today and ride a bike down the road and get usable data?   The answer is Yes.  But…the system is still a bit of a prototype, and as such “Can’t yet stand up to the Irish rains” that routinely drench them in Dublin, Ireland.  But he said the final production systems will absolutely be able to ‘stand in a foot of water’ – which is logical when you think about where you might put your foot, especially in mountain biking.

For them, the next step is really finding a partner to bring the product to market.  In other words, they’re looking for a dance partner, especially now that both Garmin and Polar are out on the dance floor shakin’ that thang.

He said they’re ideally looking at an organization that can assist with manufacturing and marketing resources…essentially with “clout”.  And luckily for him there are still plenty of big companies in the cycling world that could fill such glass slippers.  It’s just a matter of finding the right one.

I asked what the impact of the Garmin acquisition of MetriGear the day prior meant to him and other power meter vendors.  He said that everyone was looking at it with mixed emotions.  He noted on one hand, it might force Garmin to deliver better focus with respect to power meter metrics.  On the other hand, everyone was nervous what it might mean with the existing relationship and ownership over ANT+ – the protocol that all of these vendors (except Polar) use to communicate.  He compared it to some degree to having “A lion next to you, unsure if it will bite you, or just sit there”.

Finally, the big question is timelines.  He acknowledged upfront that no power meter company in the market has been able to deliver on their stated timelines – big or small.  And some of that he said was just due to the complexities.  He noted that it’s incredibly expensive to develop and design a power meter.  Even for a small company such as his it’s in the hundreds of thousands of dollars.  This in turn requires selling a pretty significant number of units in a niche market in order to recoup even the time spent, let alone any capital costs.

That said, he hopes to be producing pre-production units in 2011 and be in the marketplace at some point in 2011 as well– but he’s also realistic that could slide to 2012.

And last but not least – pricing.  He noted that it would be competitive in the market.  He pointed out that the cost of the power meter itself (materials) is actually relatively small, it’s just recouping the R&D costs that drives up price….but again re-iterated that it would be ‘competitive’.

As we finished up we chatted a bit about whether or not such a system could be adapted for running power.  There’s been some interesting articles and papers published recently around the idea of a formula for generating a ‘power’ number for running, and perhaps a shoe-based system would be practical.  He said that while he’s aware of some of those efforts, it’s not something that Brim Brothers is focused on today.  Today, all of their focus is 100% on getting a product to market.