Perhaps one of the biggest bits of news coming out of Interbike this week was Garmin’s acquisition of MetriGear.  For those not familiar, MetriGear was/is a small startup company that’s been slowly chipping away at development of a pedal based power meter for the past few years.  I highlighted them earlier this year in my Top Sports Companies to Watch. They hadn’t quite got to market yet, but had showed quite a bit of promise with functional prototypes, and updates via their blog.

There had been significant speculation as to whether or not Polar/Look’s recent pedal announcement had actually been an acquisition of MetriGear.  That was then followed by MetriGear removing their name from the Interbike Exhibitor list – thus only further adding fuel to the fire. But Garmin went ahead and changed the direction of the fire on Tuesday evening with the announcement that they had acquired MetriGear and planned to bring Vector to market as Garmin’s own power meter, with Garmin Vector being the official product name.

I had a chance to catch up with both Jake from Garmin, and Clark from MetriGear earlier this morning here at Interbike.  As part of that interview I was able to get a pretty good grasp on where they stand today and what the future of power from Garmin’s perspective is. 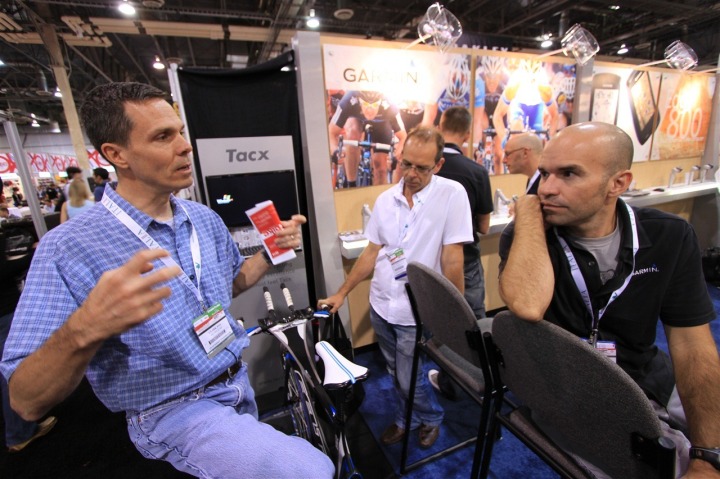 Oh, and if you aren’t familiar with power meters, I recommend you start here with this post.

Impact on the Power Meter Market:

Perhaps the biggest question everyone has is how this will impact the rest of the market, and what changes it will bring to the consumers ability to get power meter data.  I’ve talked to virtually all the major and minor power meter players here at Interbike over the past few days – and the opinions are actually largely the same.

On one hand – everyone is optimistic that this will only further to expand interest in power meters, which even for companies selling ‘gold standard’ systems like SRM – means that more interest will also be driven their direction.  There is also optimism that this will force Garmin to expand and update their power meter metrics currently offered with their fitness line.

On the other hand, there is concern amongst other companies that Garmin could potentially force or otherwise negatively influence ANT+ (who they own), which is the protocol that all but Polar uses to communicate between power meters and head units.  While virtually all power meter companies I talked to noted the concern, they also noted that’s it’s always been a concern with ANT+ being held by a private company that’s also a competitor.  And all of these companies pointed out that the situation has largely been the same since Dynastream (ANT+) was acquired by Garmin – in that they’ve always had that bit of lingering concern out there.

For its part, Garmin made it clear during my interview with them that they have zero plans to close the system with respect to power, and instead only want to grown the ANT+ system – including the numerous non-Garmin devices that compete with it today.  They were pretty emphatic that they believe from top to bottom at Garmin nobody has any plans try and force decisions at ANT+ to favor Garmin alone.

In many ways, the components and design of the pedals at a high level are similar to the Polar/Look pedal design.  Within the spindle of the pedal there is a small axle which measures forces using a silicon based strain gauge and accelerometer.  You can see the basic idea depicted from this earlier illustration on their site.

One item that Clark showed me but I was unfortunately unable to take pictures of was the current and past axle electronics and design.  The small case he pulled from his pocket showed the evolution of just the last year’s worth of designs, and showed a pretty significant decrease in size – by probably close to 50%.  It was also significantly smaller than the Look/Polar final prototype axle.

The silicon based design is much more resilient to changes in environment than typical strain gauges used today, thus like the Polar system it will be largely immune to needing constant calibration.  However, Clark did note that they are looking into the ability to allow users to zero the the unit from standard ANT+ head units.

The design will include two pedals and two transmitter units – with a total system target weight of under 50g.  The transmitter units will sit just on the outside edge of the crank arm (closest to shoe), nearest the spindle and will attach directly via the spindle threading.  In the demo he showed me he used the example of the current Garmin ANT+ foot-pod as about the same size and internal electronics as the Vector system. 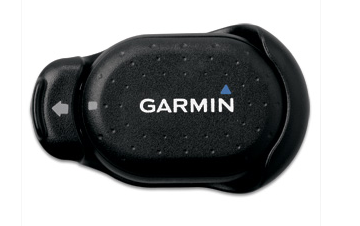 That small transmitter will be what relays data between the pedals and the head unit.  Like the Polar system, one of the two pedals will be the master, while the other the slave.  It has yet to be determined whether or not that’s the left pedal, or the right pedal.  Polar uses the left pedal.

Due to the accelerometer built within the device, the pedal is capable of gathering cadence data without any external sensors or magnets.  Further, the unit is able to measure where the force is exerted on the pedal, such as whether it’s the left side or the right side on a given pedal – effectively assisting pedal/bike fit.  It’s because of this that the unit within the assistance of external software could actually look at metrics like: Power while sitting, power while standing, etc…

The pedal transmitter then sends to the head unit the  power data using ANT+.  The ANT+ spec has actually already been updated to include Left/Right pedal data (as well as total combined power).  This was through efforts by not just Dynastream/ANT+, but actually feedback from all of the power manufacturers – including non-pedal ones like Quarq.  It will require some head units to receive an update to understand the new power data types, including Garmin’s own units which aren’t updated yet for the spec.

Similarly, the ANT+ spec will still need to be updated to include additional data types such as angle of pedal – which is something that they plan to propose to Dynastream for inclusion with ANT+.  But it’s not just MetriGear that wants/needs this, but also the other three ANT+ based pedal manufacturers today working on product (Brim Brothers, O-Synce, Elite…and Garmin/MetriGear).

I asked whether or not Vector could be updated to BTLE should ANT+ popularity wane (as some are predicting in the 18-36 month range).  He noted that while they are fully committed to ANT+, the system was designed such that the electronic components relating to ANT+ are outside the spindle alongside the crank, and could be changed/adopted should the winds of technology shift.

The unit has also been designed such that firmware updates can be done over the air (wirelessly) by the end user using a simple ANT+ dongle – just like the ones used today to wirelessly sync data between some of the Garmin Forerunner series like the 310XT.  No sending back to the factory to get firmware updates required.

Finally, last but not least – with respect to durability, the spindle and associated electronics has currently met the 3,000,000 cycle test (revolutions) performed externally by a Japanese testing firm, along with a successfully completed 500 hour nonstop test.  They noted that currently Vector has logged ‘thousands’ of real world miles as well.

The big point that Garmin wanted to make during the interview is that they want to make power meters as ubiquitous in cycling, as they’ve made GPS in sport/fitness today.  They emphasized that while they are certainly looking  to appeal to everyone from the Tour de France pro rider (aka: Team Garmin) – they are ‘excited’ about the ability to leverage Garmin’s manufacturing process and power to bring the product to a much wider market than power meters impact today.

I asked about the previous roughly $1,000 price point that MetriGear has been targeting in the past, and asked whether or not that was still the target.  While they couldn’t answer pricing questions – it seemed pretty clear from the way they beat around the bush that they were looking at something no higher than that – if not considerably lower.  They continually emphasized trying to get power meters into a much broader audience – and given the current low-end price point for a direct force power meter is $1,000 (PowerTap), I’d have to believe they plan to significantly undercut that.  They also emphases multiple times Garmin’s power in manufacturing and ability to get to market.

When you look at the power meter get-to-market process – multiple companies pointed out to me in the past few days that the bulk of the cost is in the development of the power meter.  The actual components aren’t terribly expensive in comparison.  Given Garmin has effectively paid for that development cost via the acquisition costs (thus, they are sunk costs) – so anything from this point forward is relatively small in comparison (development-cost wise).

Lastly, I wanted to touch on one area that I get a lot of comments on today – which is Garmin’s current lack of depth in power meter metrics on bike.  For those not familiar, Garmin’s Edge series head units and the Forerunner 310XT display power meter data today.  But the level and depth of the information displayed in the Garmin displays has been a bit lacking – only providing the most basic power meter data, especially compared to dedicated power meter head units like the Joule or SRM PCVII.

Both Jake and Clark agreed that to date the metrics offered on power meters hasn’t been as deep as some of the competitors – but they went onto note that one of the underlying benefits of having Clark and his three person team join the Garmin teams in Kansas, was the addition of ‘power knowledge’ to the fitness team.  Jake was pretty excited that Clark with his power background would really be helping to drive much of the new additions to the Edge/Forerunner line.

I asked if they plan to start having that ‘Clark influence’ drive power related updates to the Edge/Forerunner line prior to Vector’s undetermined release.  They both said said ‘Absolutely’.  As an example of this, they noted that for example the older Edge 705 (now targeted for January 2011 end of production) will still be given relevant updates moving forward – even as the Edge 800 replaces it (now targeted for November 2010 release).

Given Clark comes from a power background, I’m pretty optimistic that he’ll be able to effectively drive those changes within Garmin.  In part, because necessity will require it, and in part…because he’s a geek inside.

There’s no doubt that both Garmin and MetriGear and are excited about this – and I think from a consumers standpoint, this can only manifest itself in good news.  While there’s certainly a bit of nervous excitement from the rest of the power industry – I think that in the long run, it will benefit most of them as well.