An entertaining introduction to Cyclocross racing at CrossVegas

I should preface this by saying that before last night I knew just about nothing about Cyclocross…well, except that it involves bikes, obstacles and occasional running.  So I suppose in many ways it’s kinda like triathlon – though without the aquatic element.

I had heard a while back that ‘the event’ to go to was CrossVegas – which is the biggest Cyclocross race in the country, with thousands of folks lining the well lit outdoor course late into the night.  So after finishing up a workout out in the desert, we headed on over – ready to catch some of the action.

Upon arriving the first thing we stumbled into was one of the teams warming up…pretty much like you’d see at the Tour de France near the team van/bus and all on trainers.  I don’t think I was expecting this level of…well…money. 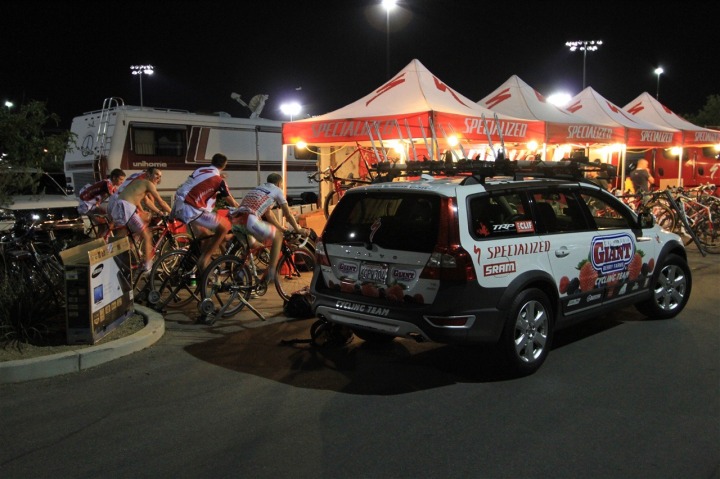 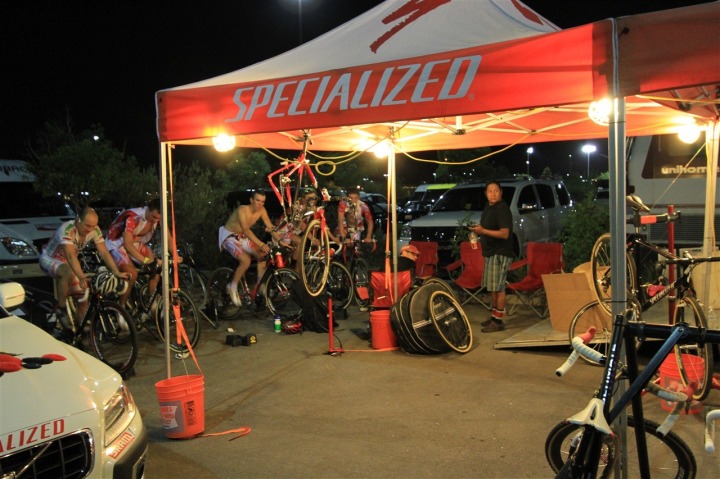 And less you think this setup is limited to just the men – the women had equally as cool digs: 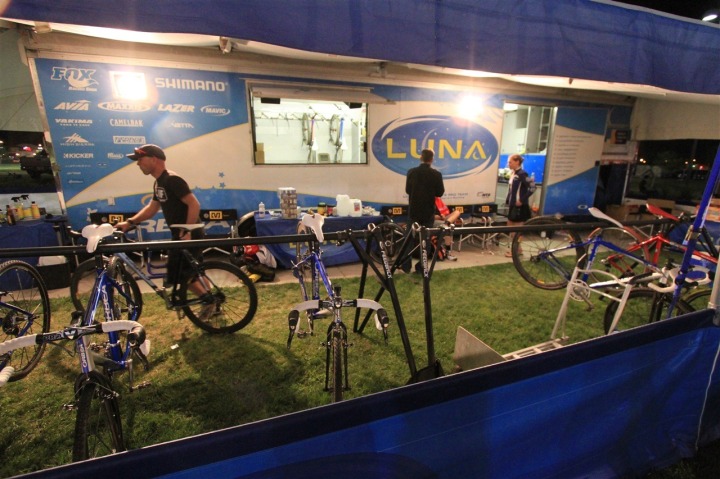 Once you got past the lineup of team cars/vans/trucks/buses/BBQ’s/big screen TV’s, you found yourself on a giant soccer field complex – which is where the event was being held.  The course was marked off using simple plastic stakes with tape in most places – with only the crowd-heavy areas having some form of barricade/boards. 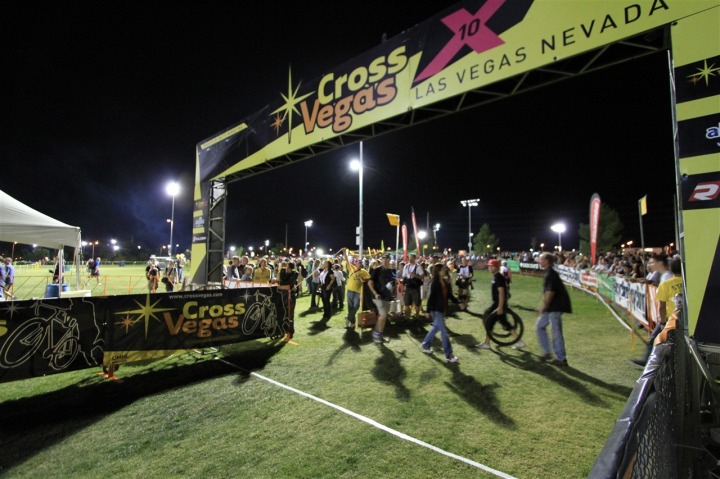 By time we arrived the Elite Men were just arriving at the start line for their nearly 1-hour long race – with media crowding the start line hoping to get the best shot: 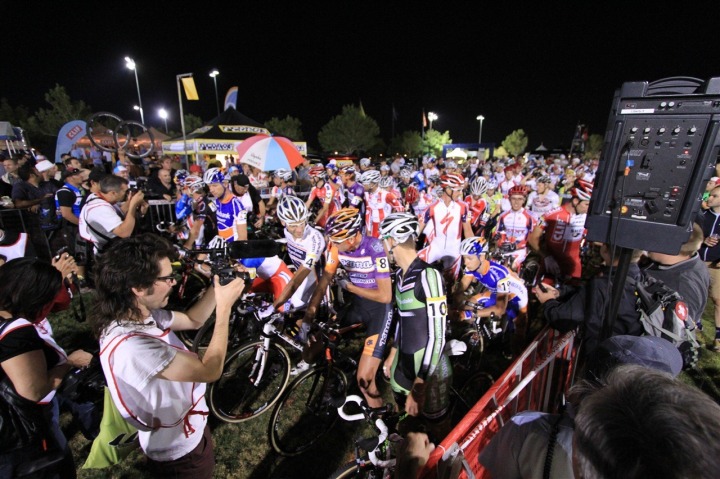 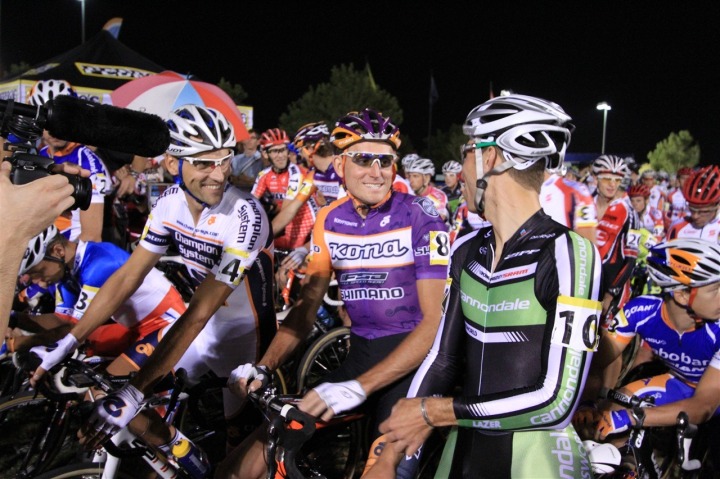 A short bit later the start official came over and gave them a quick talk…actually ended up being more of a pep talk telling them to ensure they put on a good, exciting show. 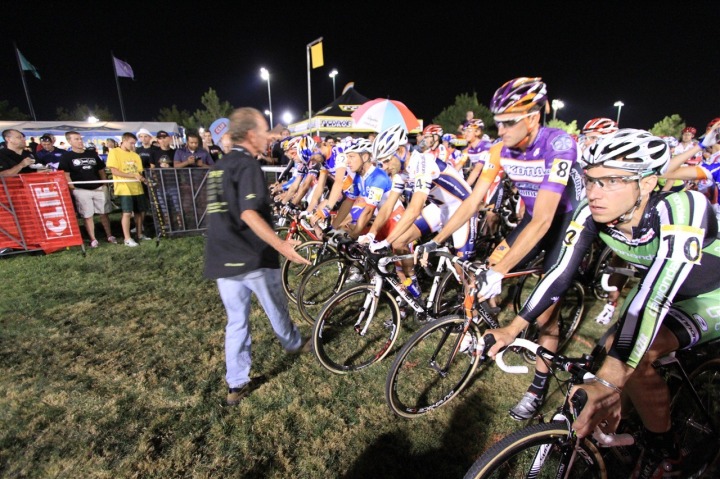 Meanwhile, an official over the PA system reminded riders they weren’t allowed to accept alcoholic beverages assistance from those outside the course.  With that, less than two minutes later – they were off! 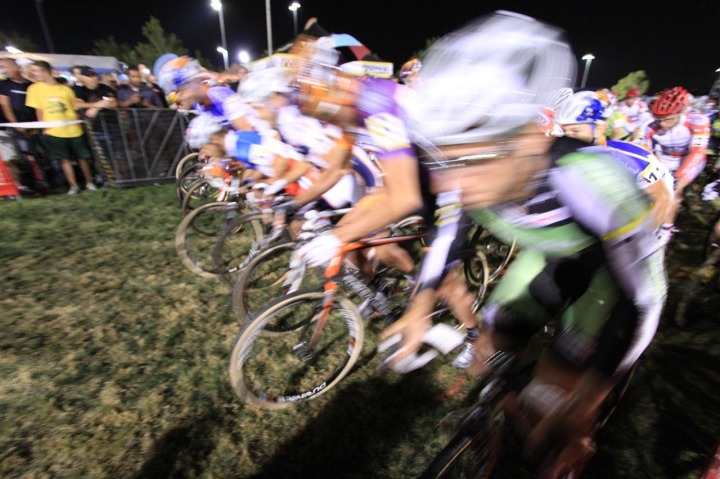 It was fairly surprising how big the field was…just ended up being a never ending blur at the beginning: 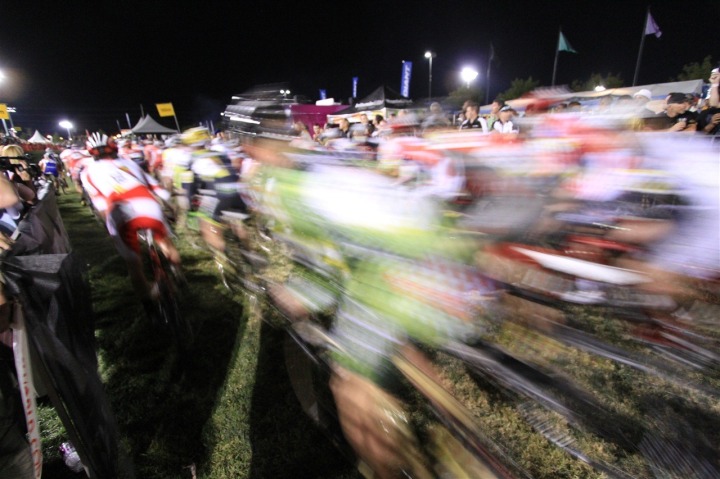 They then completed a bit of a shortened intro lap on the flat fast portion of the courses before heading towards the main areas  The course extended over numerous soccer fields and hills, of which you can just see only about 1/3rd of in the below picture…it’s pretty massive:

The really entertaining sections involved hill climbs.  There were two major hill climbs – one including obstacles and one including stairs.  First up – the stairs.  They quickly dismount, run through some dirt, and then up a handful of stairs before remounting at the top of the hill. 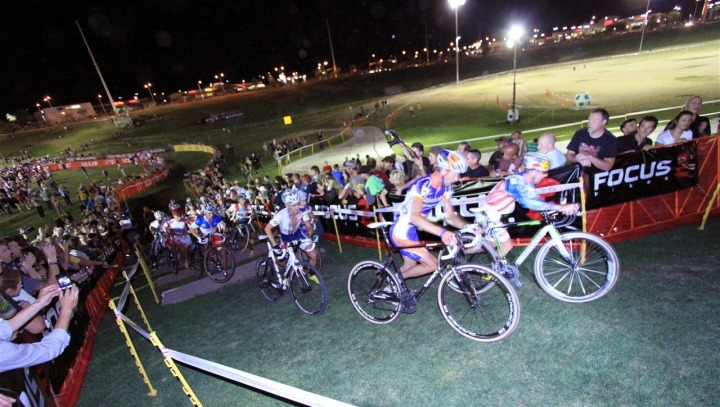 Then we have the obstacles section, which is situated at the base of the upwards section of another the hill. You can see the obstacles in this picture in yellow on the course almost in the middle of the picture. 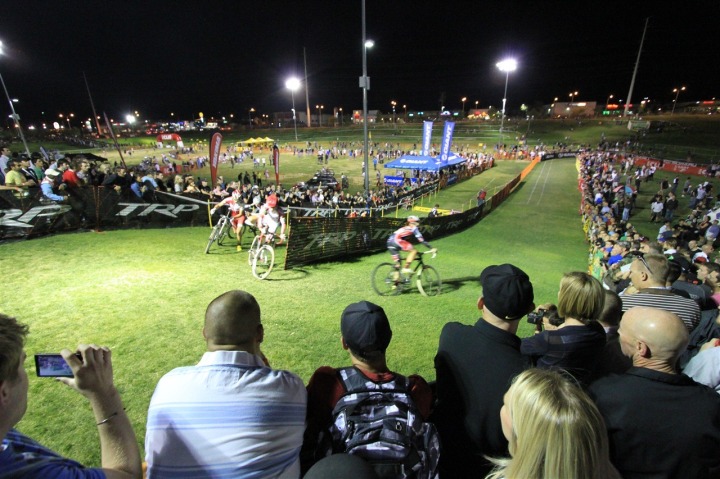 These non-movable barricades up to 40cm high…or basically high enough to depart you from the bike should you not contemplate them prior to arrival.  You have a choice of either bunny hoping over them, or running over them.  Most folks chose to run over, and those that did bunny hop didn’t seem to save much (if any) time based on what I saw.  In fact, I think some bunny hopers actually lost time.

You can see the same obstacles below in this photo in the far lane (about to travel uphill): 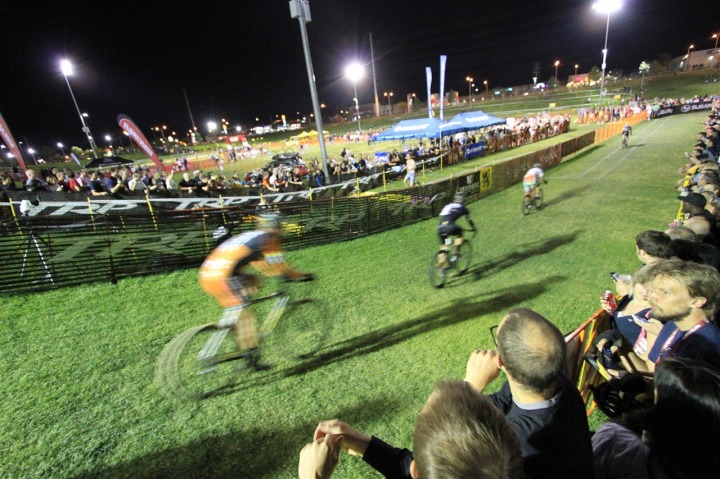 You may also notice in that photo above a rider without a bike crossing them.  Perhaps part of the allure of the event is the fun-party aspect to it.  In this case, this is a fairly well intoxicated fan that took advantage of the break in riders on the course to re-enact portions of it…including a roll down the hill: 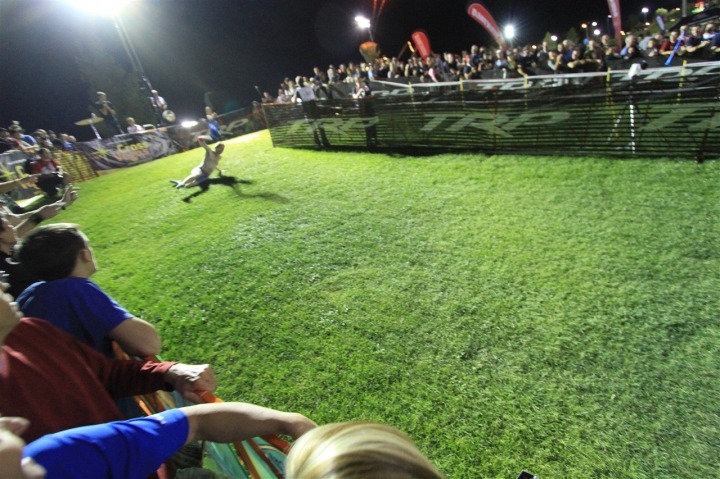 Luckily, with the security folks armed with Vuvezelas, he didn’t really have to worry about much…and really – nobody was about to do anything more than laugh at him anyway. 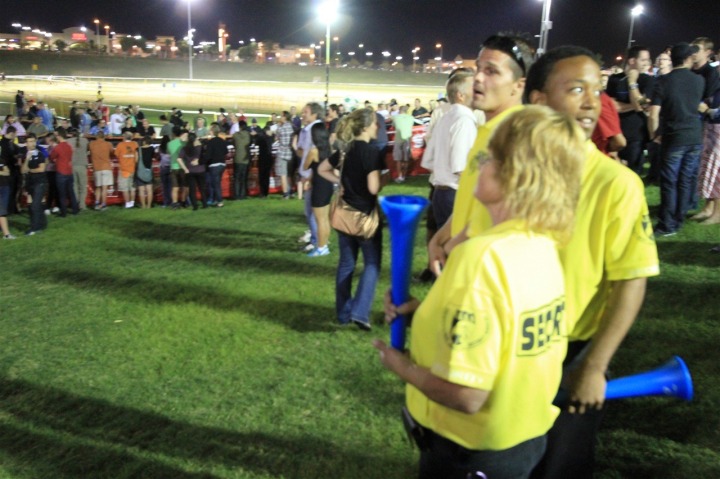 Speaking of vuvuzelas – these things were everywhere! 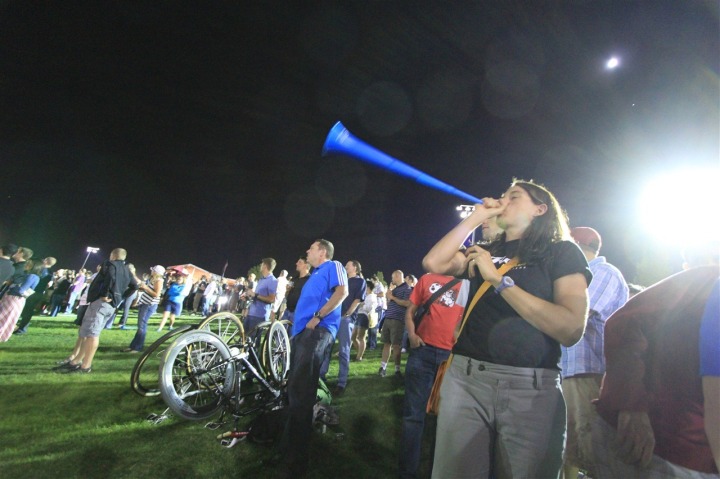 This duo had synchronized their blowing as each rider came on by: 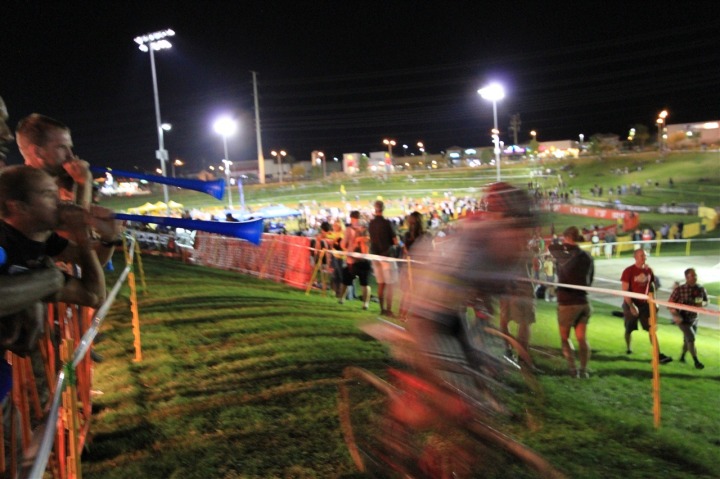 But the real action would be at the finish. For much of the race one man had built up a lead to upwards of 24 seconds on the rest of the field.  But over the last 1-2 laps, that lead slowly dissipated.  And as the final few hundred meters approached – it came down to an all out sprint.  As well as the most flashes you’ll ever see concentrated on one place.  Check out the below picture just seconds before the flashing starts: 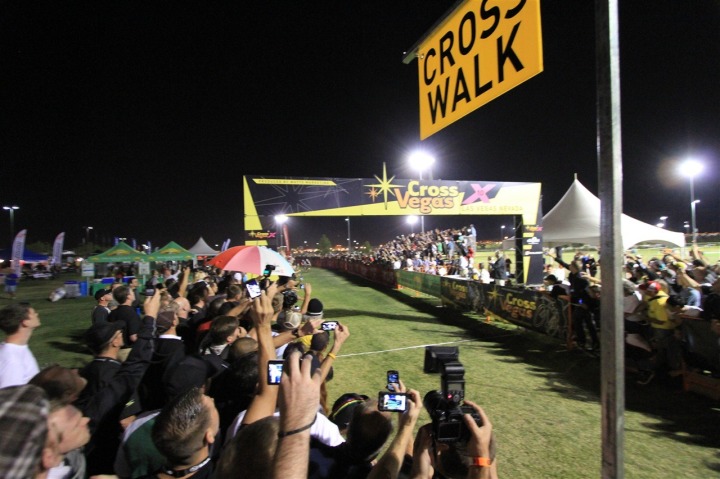 Now see what it’s like as they approach closer: 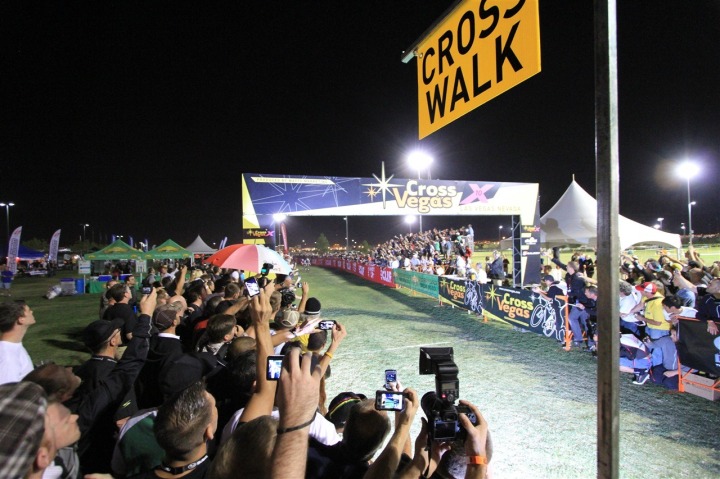 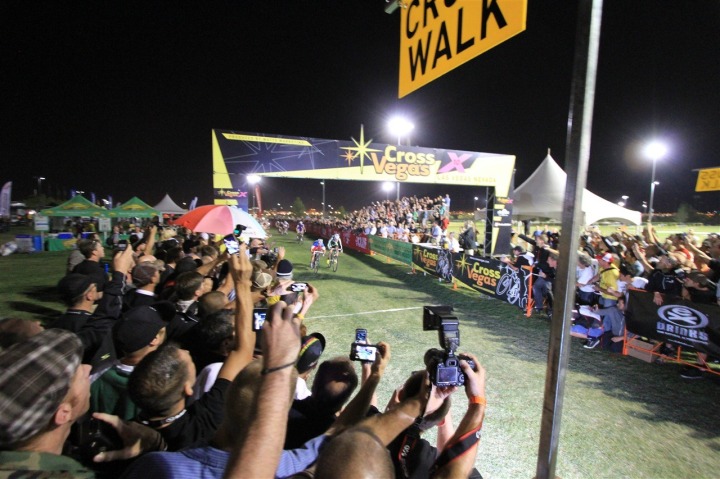 In the end, the guy who had held the lead for about 35-45 minutes…lost it by half a wheel.  It was kinda sad – like when you watch the peloton swallow up the lone few leaders after hours of hard work out there. 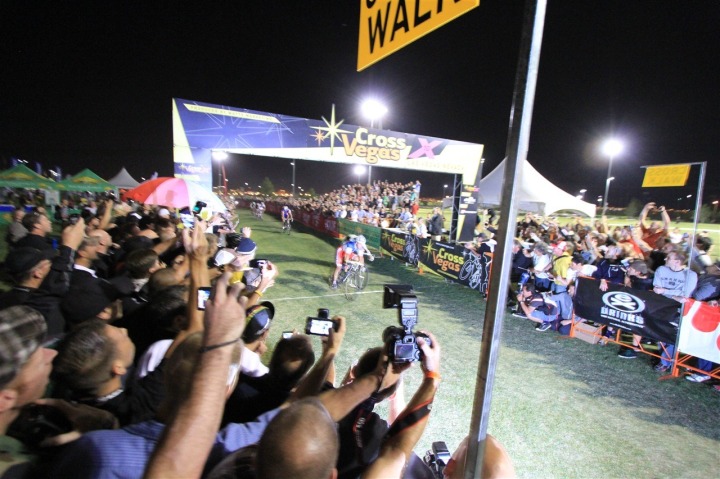 And while the photos above help to tell the story – I also put a few short video clips together of the race, including the different hill sections and a quick twisty section that resulted in a few crashes right at the beginning (which I have recorded).  Enjoy!