I spent a bit of time this evening listening to the Garmin 3rd quarter earnings call.  The primary reason is that often times companies will either purposefully or inadvertently release tiny snippets of information via these calls.  In many cases, these little tidbits aren’t picked up or reported on by financial analysts, because they may not be super-familiar with the details of products.

As a general overview of the earnings and Garmin structure to get started with:

Yes, just to put that last line item number out there again:

Garmin fitness devices now account for nearly half (41%) of the operating income for the company as a whole.

And they expect this trend will continue going forward. 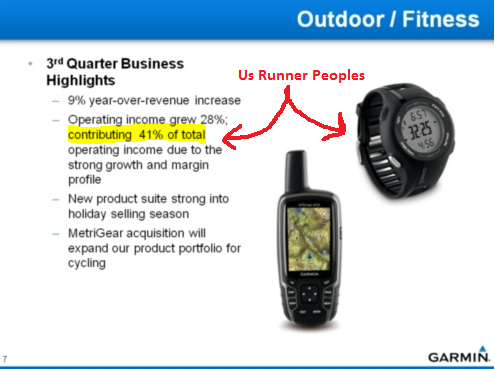 Outdoor/Fitness continues to grow at 9%, and they predict sustained double-digit growth on Fitness, with flat growth on Outdoors going into the holiday season.  This is in part due to the new offerings below.  Of course, I’ve covered all of these products in these posts about the Edge 800 and the Forerunner 210/410.  You’ll see more in my full in depth review on the FR210 here in the next few weeks, with the FR410 following up after that. 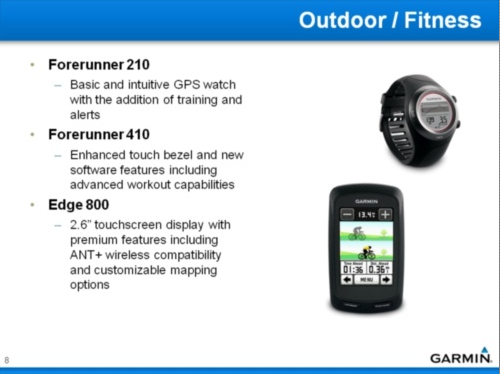 And last but not least – in case there is any doubt that Outdoor/Fitness products aren’t super-profitable, check out the margin of the Outdoor/Fitness segment.  I’ve got an upcoming post that talks to the individual components within some of the fitness devices and exactly how much the major components cost.  Fun stuff! 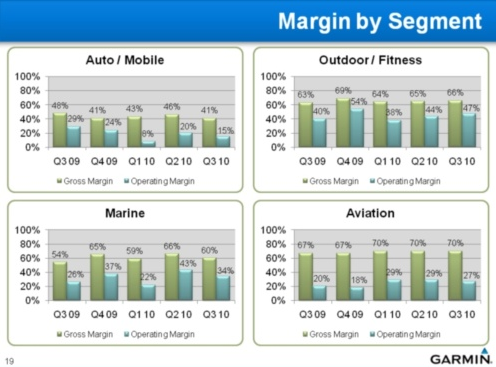 Of course – as I noted, there are a few more little bits of information in here I thought were interesting:

During the call they let the little nugget slip that they intend that the Metrigear Power Meter pedals will make it to market late next year:

As you may remember from my interview with Garmin and Metrigear back at Interbike, they hadn’t committed to a timetable yet (nor a price).  I had speculated at that time (and again during my Interbike Fantasy Timeline Post) that I would expect to see them target Eurobike/Interbike 2011 as their release timeframe – and that appears to be the case.

Given these new dates, I’d expect Garmin will largely follow their normal historical release cycle for cycling products.  That involves announcement of product details the week prior to Eurobike, which then seaways into Interbike shortly thereafter.  We then typically see the retail channel filled in the November/December timeframe.

In short, you won’t see them in your hot little hands until the Holiday season 2011.

I also noticed the wording above in the quote of ‘new products’ versus ‘new product’, unsure if the ‘s’ at the end was intended or not.  If so, it might hint at different price levels of pedal based power meters.

However, one item that Garmin is unaccustomed to countering in the cycling arena is competitive products of similar nature being announced on similar timelines.  Specifically – the Polar/Look pedals.  Because Polar announced that they were targeting Spring 2011, this means that Garmin will have to be more open with product development and state going into next year.  The reason being that without ‘proof’ that Garmin is maintaining trajectory for a Fall 2011 release, they run the risk that folks will look at the Polar product instead given the earlier timelines.  Of course, Polar will be held to the same bar as well.  I would expect Garmin to utilize their existing social media venues (Garmin Blog) to provide that information.

Now of course, there’s a separate argument around whether or not Polar will hit their announced timelines (I think unlikely), or whether or not they’ve arrived on the scene with a product without an audience (due to the $2,300 price tag and lack of diversity in head units)…but that’s all fun for a separate post.

I thought these few comments were interesting:

1) As a result of the Garmin Phone canning (Garmin’s announced they’ve stopped making phones), some of the resources were re-allocated into the fitness division.  Hopefully this will only help to further spur either new product development, or potential integration on other phone platforms with fitness related activities (such as Android, iPhone or Win7 phone apps).

2) During the call while describing the new Edge 800 they incorrectly noted that the device will download data via ANT+ to the online portal (Garmin Connect).  While I and others wish that was the case, the Edge 800 (along with the rest of the Edge devices) uses a USB cable to connect to your computer.  While the sensors are of course wireless, the connection to ones computer is not.  Just a random thing I thought interesting.

3) Regarding the phone application space, they plan to “compliment the overall product line” using their brand and content base to supplement existing products.  In other words, look for apps that integrate or connect to Garmin devices or platforms (i.e. Garmin Connect) – more so than devices that are standalone designed to generate income.

4) They commented that a non-trivial driver of new revenue in the Fitness division was to offer lower price points, specifically with the FR110 – as opposed to the premium price offerings that make up the majority of the fitness line.

6) When asked about other fitness related areas they can pursue beyond running/cycling, they said there are definitely areas they are pursuing, but wouldn’t comment on specifics.  Perhaps a watch for bull riding is in the cards after all…