A weekend of Cycling, Snow Skiing, Crankworx and Ziplining

Given I’m out on the west coast this week for work, I decided to sneak in a bit of activity north of the border up in Whistler, Canada – about 4 hours from my parents place outside of Seattle.  We found some sweet last minute deals for about $109US a night for accommodations slope side in the village, certainly can’t pass that up!

Upon arriving on Friday evening we headed up north, arriving in the village a bit later than we hoped due to traffic.  But since I’m still all dorked up time zone wise, it meant that it was easy to wake up early, and thus we were up early and ready to ride Saturday morning even before the breakfast places were ready.  Since I had a simple 1hr 30m ride to get in we decided to just head north on the main route, continuing through the mountains.  I should clarify that ‘we’ is my Dad and I.  We’re actually doing a century ride together next weekend here in Seattle, it’ll be quite a bit of fun! 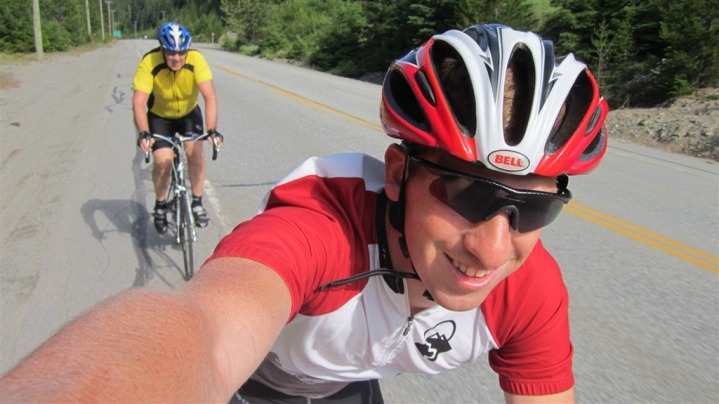 The weather was spectacular with it being warm and sunny, and of course the scenery was equally as awesome.  I just love riding up in the mountains (primarily ones with topped snow) – just wish I could do it more often. 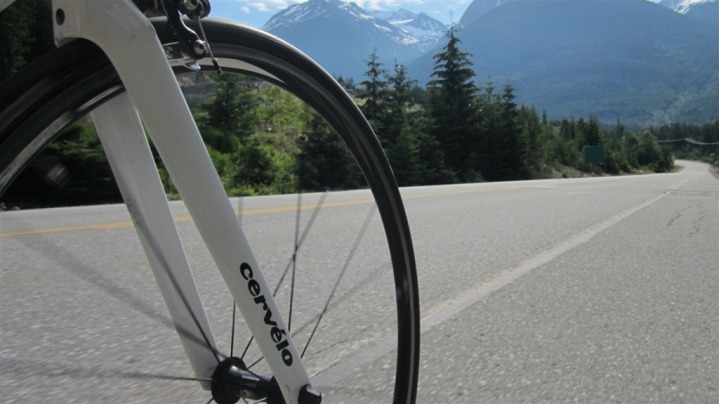 After we finished up our ride we quickly transitioned into clothing appropriate for skiing (shorts and t-shirts) and headed to the lifts. 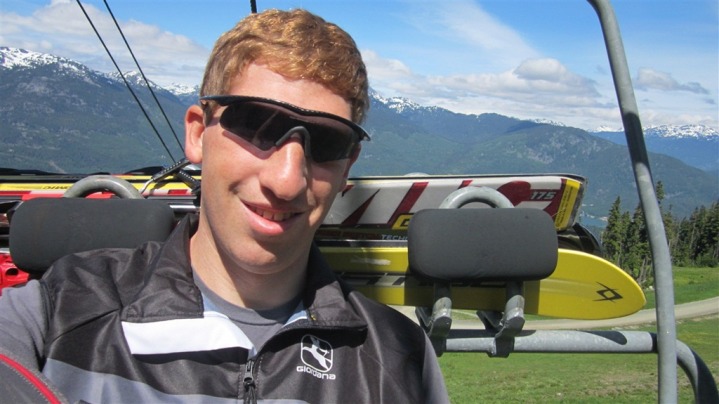 Two chairlifts later and we’d be close to snow and ready to hop on a short shuttle ride that would take us to the base of the final chairlift.  The bus was an interesting combination of skiers, snowboarders, rock climbers and tourists. 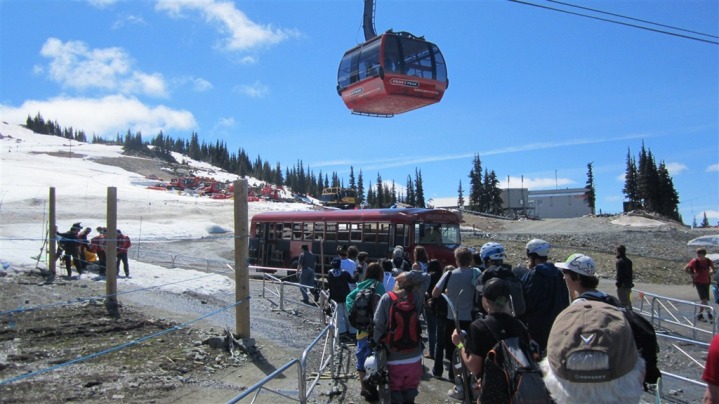 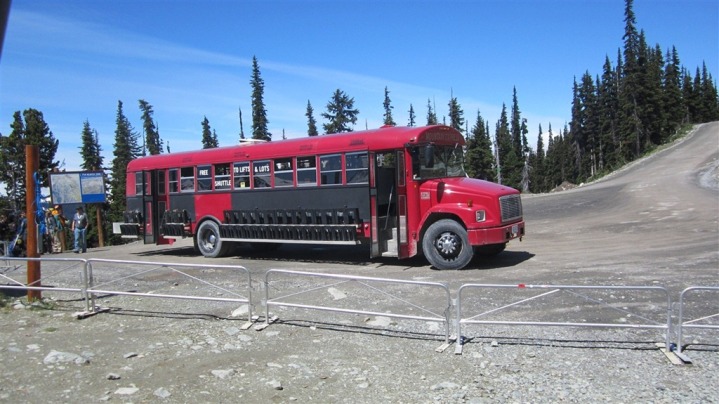 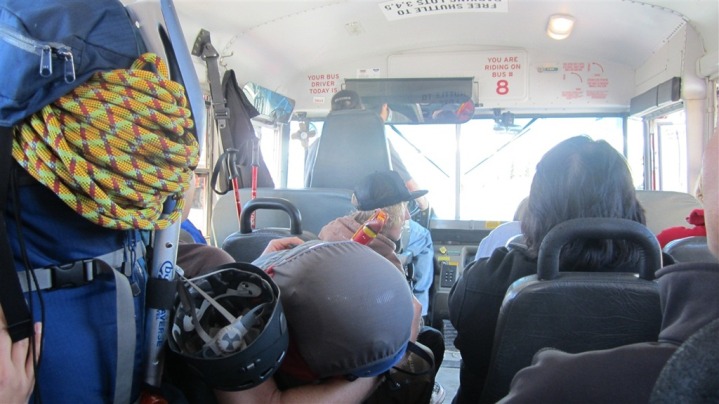 Once we boarded the final chairlift, skiable snow was finally nearby: 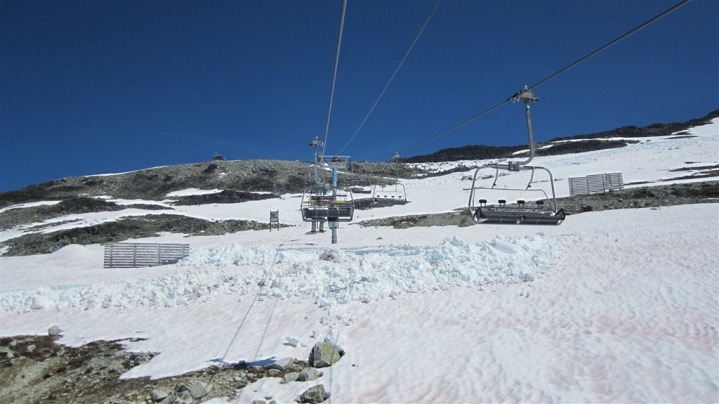 Upon arriving at the top we found ourselves at 7,500ft and with a great view of the glacier area below, which is the primary skiing area…but this was not before we viewed a slew of warnings signs: 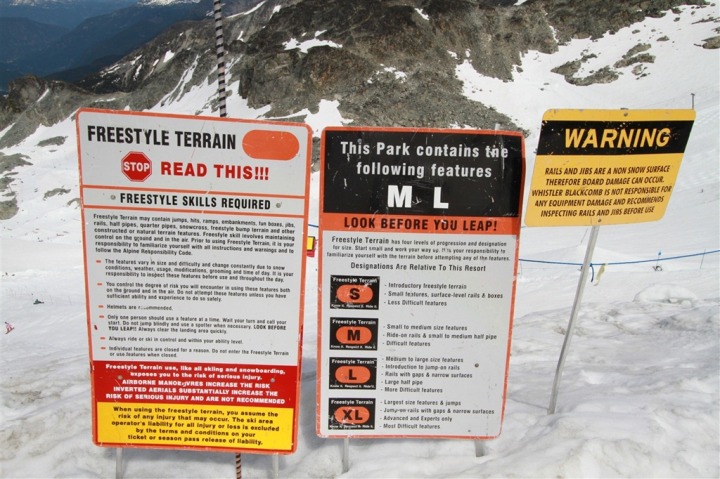 …and a small tunnel of stickers.  The tunnel went under the end of the T-Bar lift. 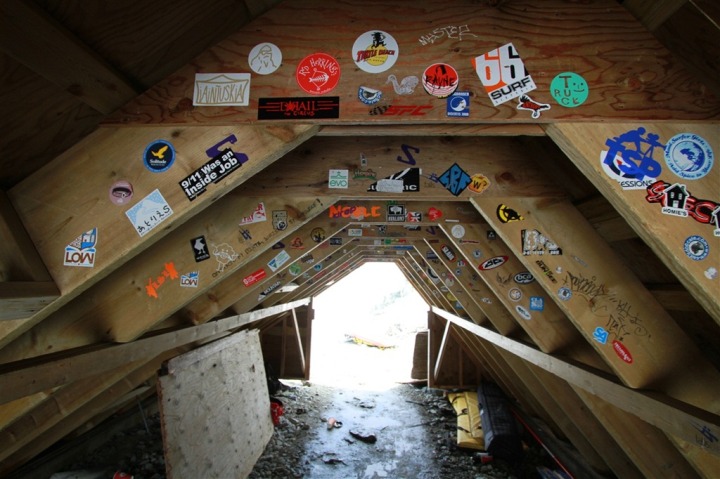 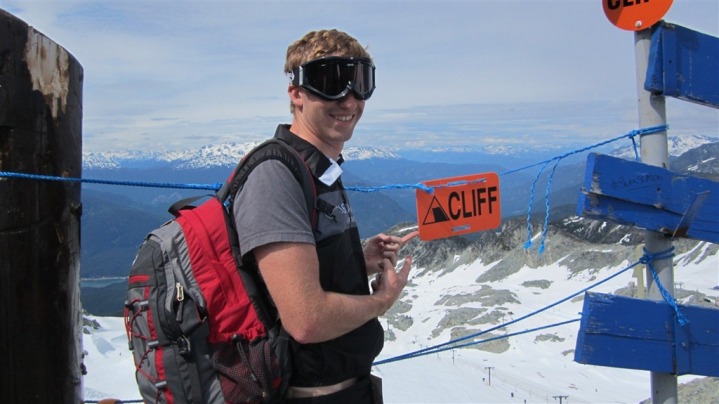 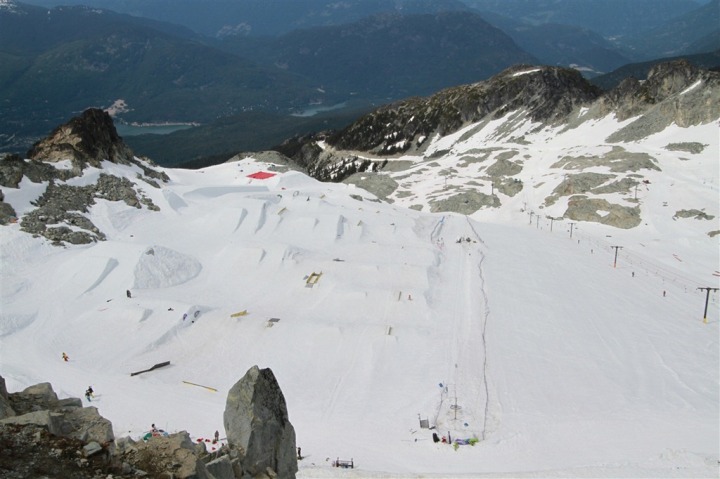 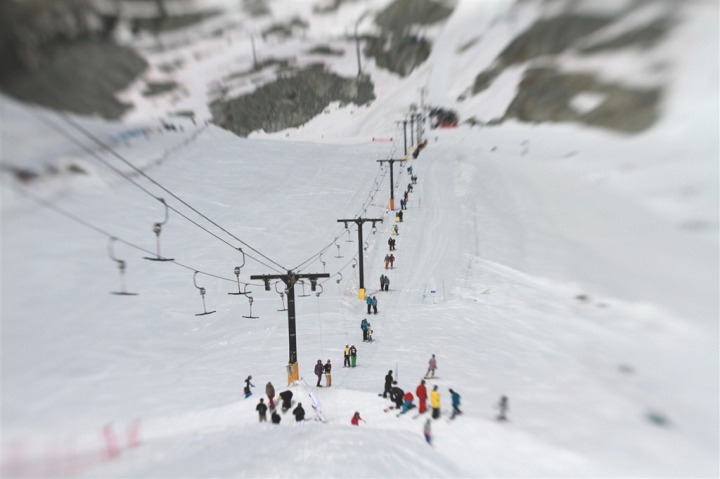 The glacier opens up early in the morning for ski, snowboard, and aerial camps.  The aerial camps are probably some of the more amazing spectacles to watch, as young athletes perfected their moves into gigantic airbags: 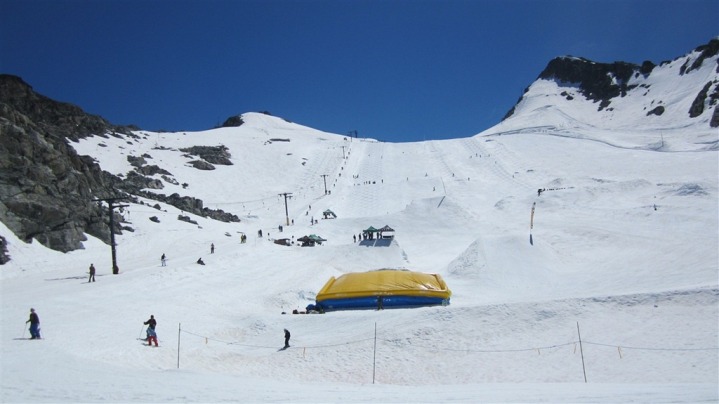 You can see a skier below – inverted – as they work on a front flip. 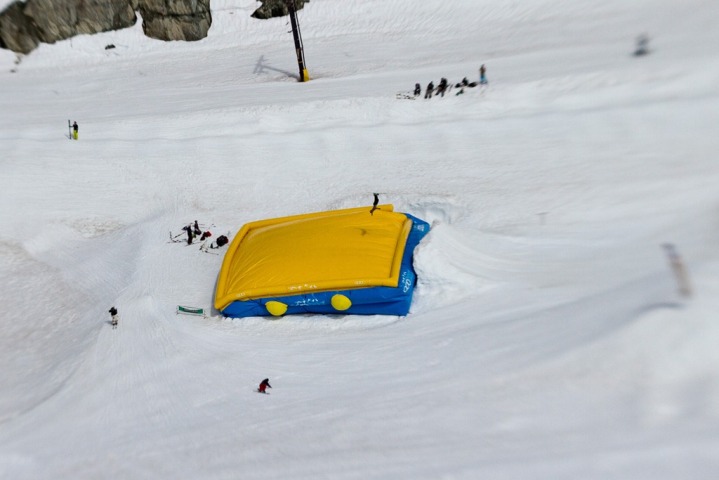 We had quite a bit of fun getting in a few short hours of skiing once the place opened to the public at noon before closing a couple hours later. Because of the lifts and what-not it did take a bit of time to get back up again for each run.  You could actually ski both in the glacier as well as outside of it on a run down to the lodge.  We found that the outside run got us far more skiing in compared to the glacier.  And with the T-Bar lines being long, the Bus+Lift combo actually turned out pretty quick.  All in my Garmin FR610 said we got in some 10.63 miles of descending runs, totaling 8,867ft of descent.  Not too shabby for a mid-July day, though it certainly helps when you can drop on average 2,000ft of vertical per run via the long way – albeit lasting only about 2-3 minutes per run. Obviously we didn’t get in a ton of runs…

But that’s alright – at least I was able to check off a single outdoor ski day for the season…which is somewhat sad panda coming from someone who grew up as a competitive ski racers often doing 4+ days a week on the snow. 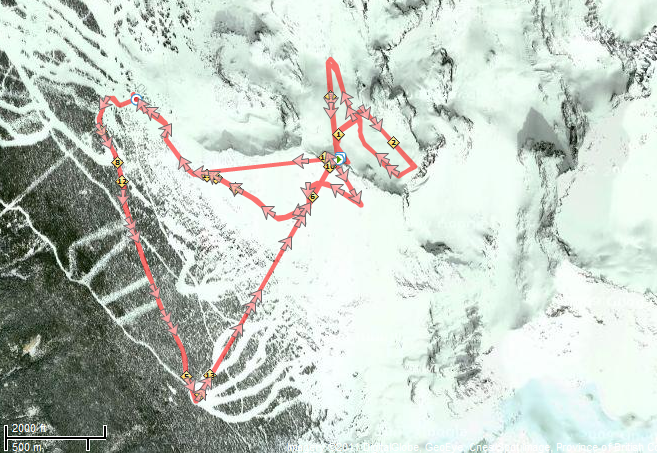 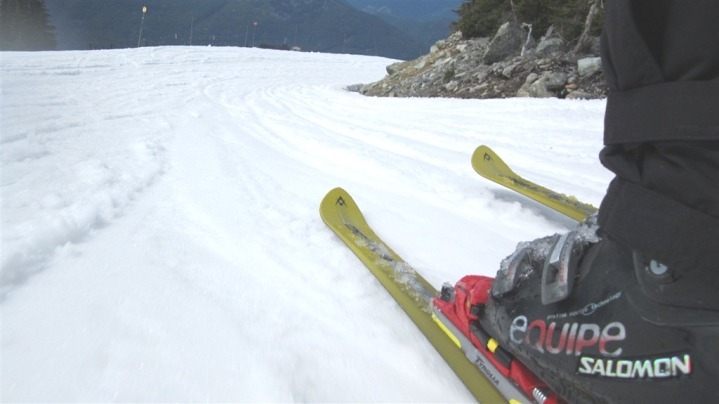 Once we finished up there was really only one logical way to wrap up our chairlift rides back down: 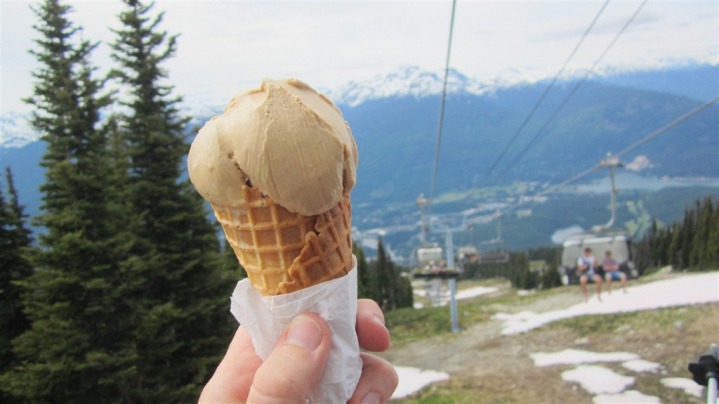 Yup…ice cream cone while riding the chairlifts in ski boots in the middle of summer.  Brilliant.

After skiing we walked over to the main village area to catch the start of Crankworx and the Redbull Joyride competition.  This is essentially a massive mountain biking event that culminates in a 5:30PM multi-hour showdown between the top athletes in the sport, all flying through the air. The place was packed – more so than for the Olympic games when I was here last.

Because the post is getting pretty long already – I’m going to stick with just a massive pile of pictures I took. 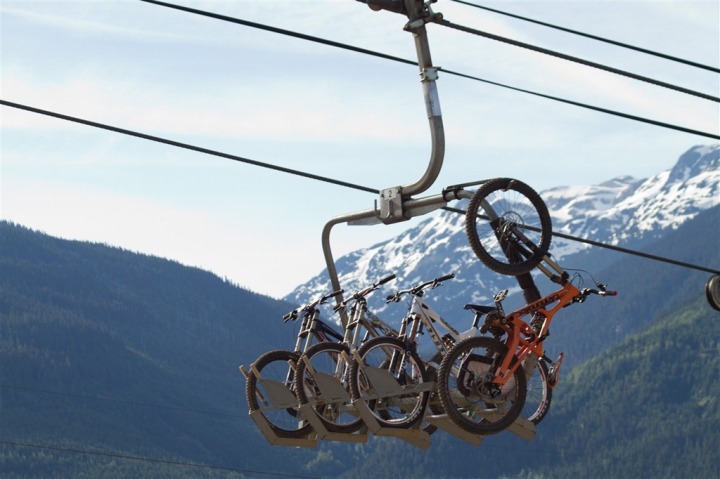 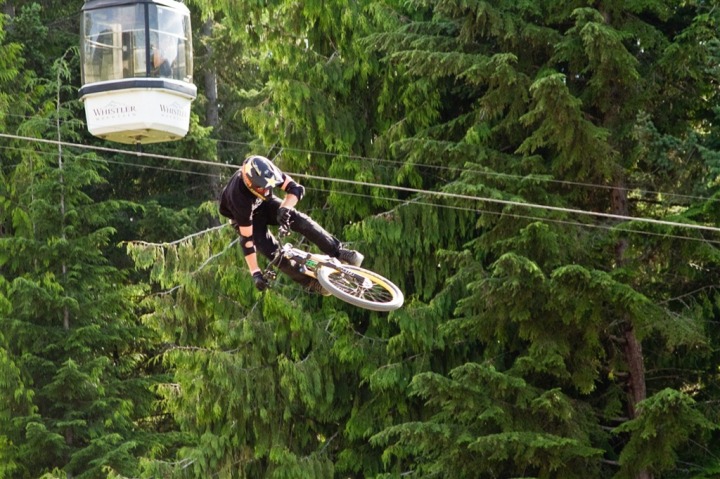 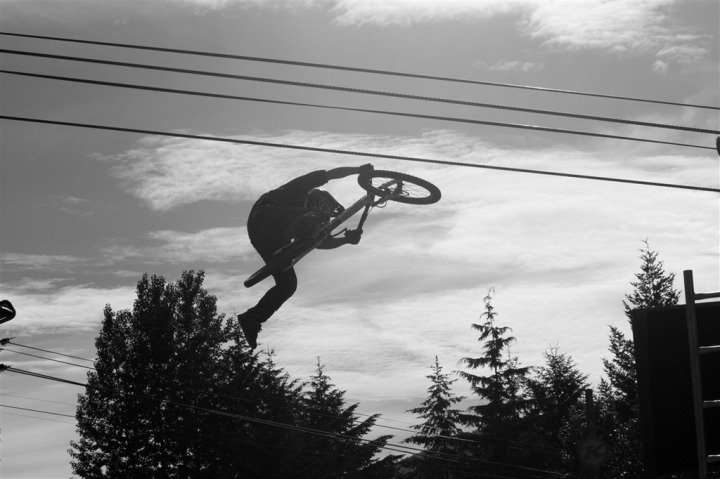 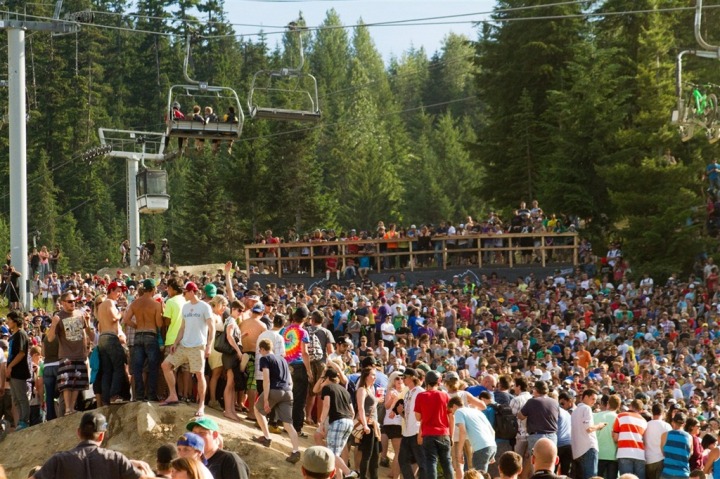 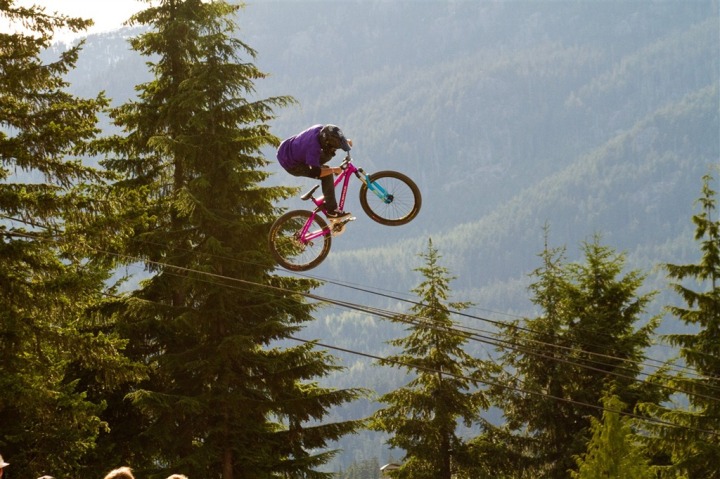 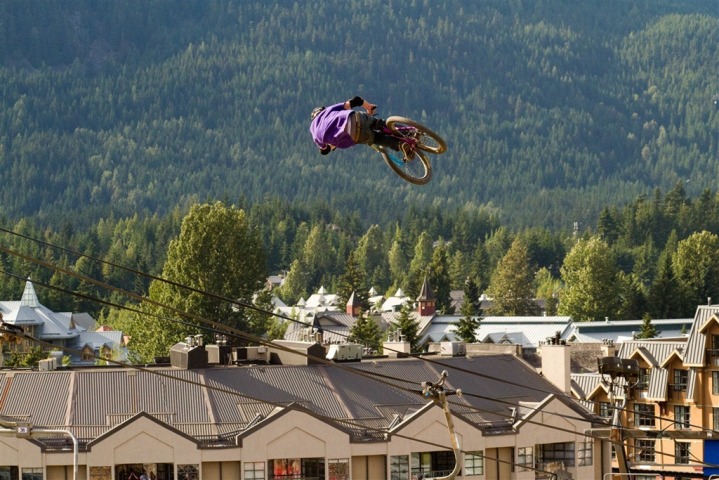 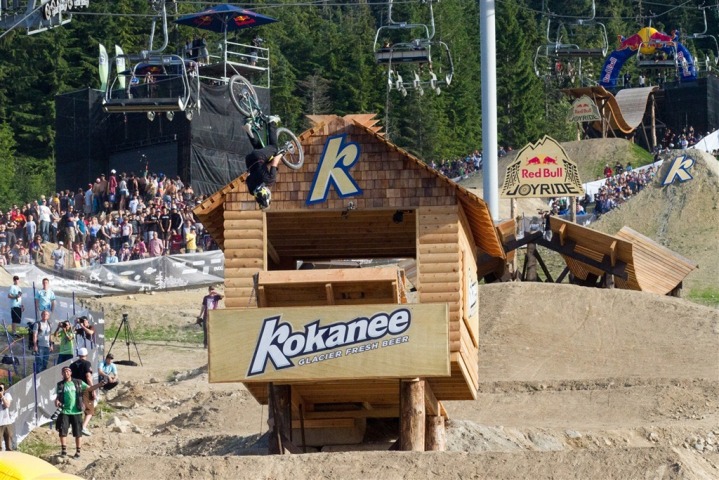 Note the next three photos.  This is precisely why I generally avoid mountain biking. 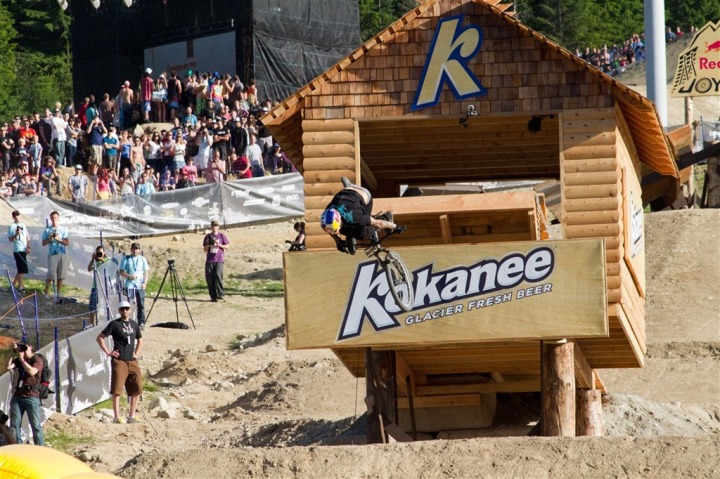 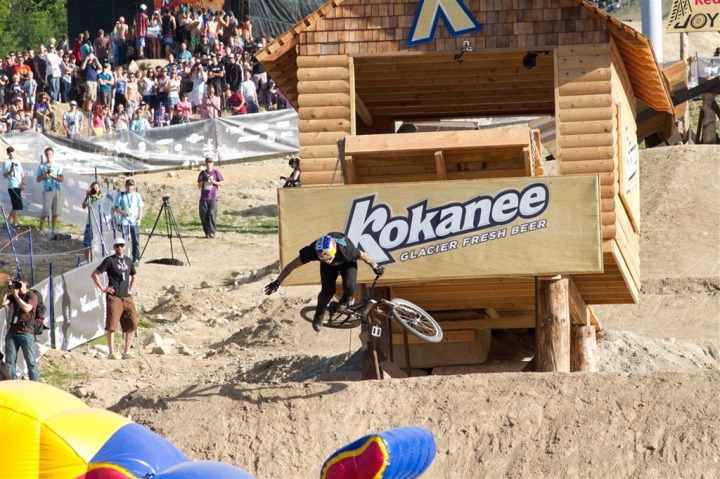 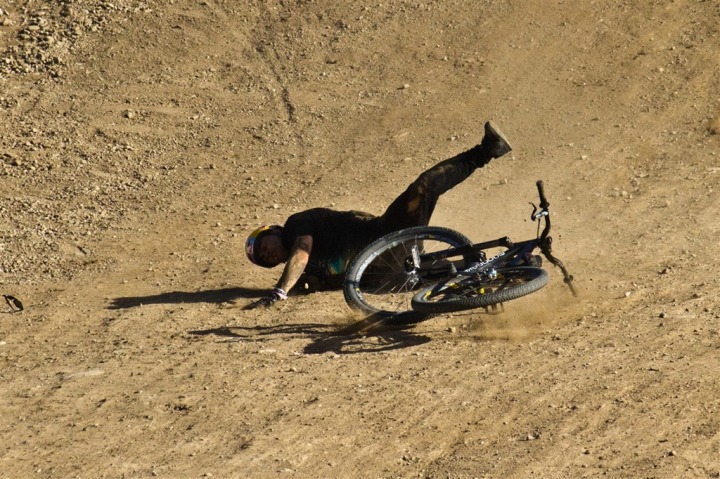 Finally, last but not least, I bring you to Sunday morning.  We decided to catch an early morning zipline tour through the forest. Here’s my dad just leaving the platform on the longest run we’d do that day at about 1,000 feet – it ended far away where the river temporarily disappears from view. 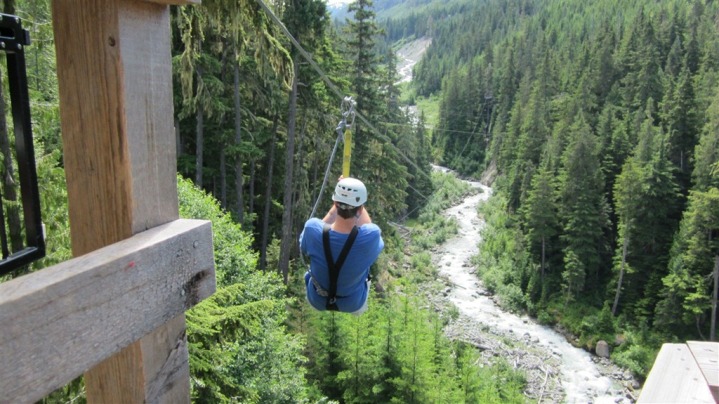 I took a few videos, but my video editing software is being problematic – so instead I’ll just take a quick screen capture of my dad, hanging upside down with arms wide open, more than a hundred feet above the rushing river below (left side of the photo in blue):

You know what’s great about ziplining though? No athletic effort required. You simply sit, clip on and enjoy the view.

I hope you all had a great weekend! Thanks for reading!