Day 4 started early, way early.  That’s because we had to make the 2-3 hour trek north up to Whistler, from Vancouver.  The trick is that in order to get to Whistler you have to have a valid permit to clear the checkpoint.  They’ve closed the mountain road up there to general traffic – only those with permits (people staying in Whistler) are allowed during daylight hours.  So along the way we had to get a pass from the little office before we could go past the checkpoint, thus adding a bit more time to our journey.

With our pass secured, we made a beeline to the Men’s Super-G event, held at Whistler Creekside. 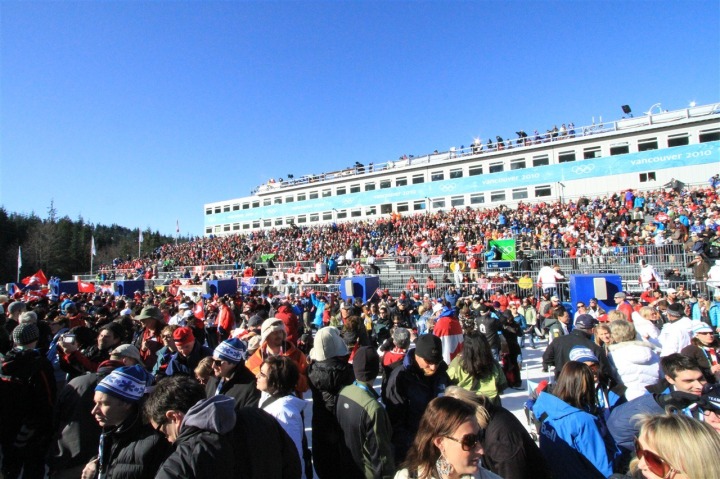 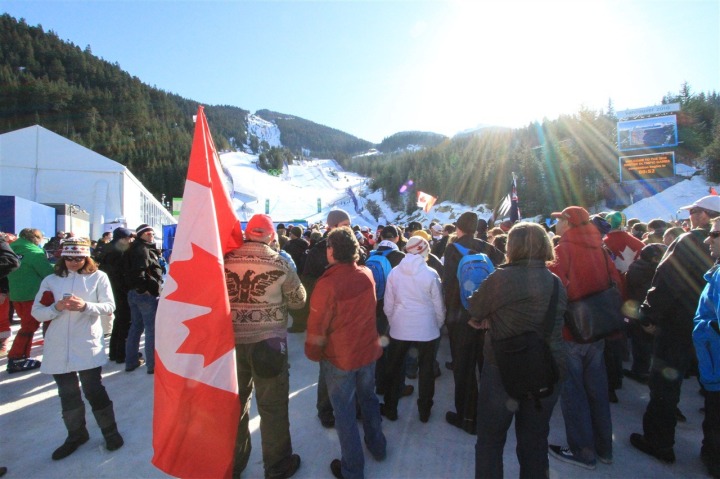 While the crowd was pretty sizeable, there was still quite a bit of wiggle room so you didn’t feel too squished in the standing area (where we were).

The race got off to bang with one of the very first athletes flying across the finish line…quite literally…in a spectacular crash.  He was fine and dandy and even gave a wave upon completing his journey.  Unfortunately because he lost both skies while on course, he received a disqualification.  Too bad…

Here’s a few frames I captured of it – there was a Canadian flag in the way, so you’ll have to pardon that, and the red line you see is the finish line: 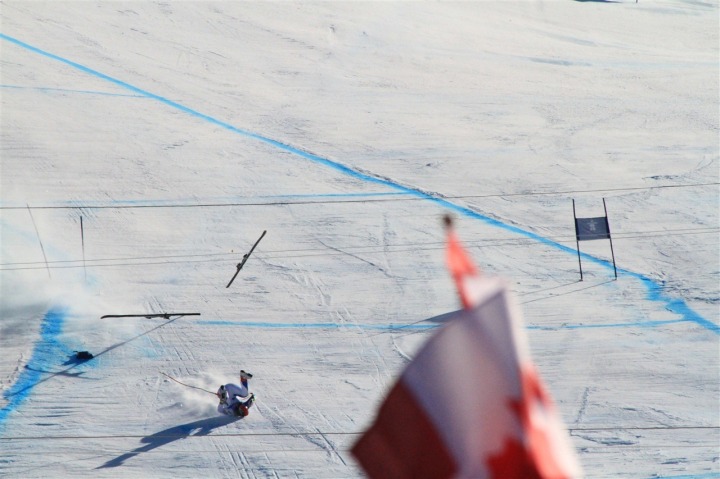 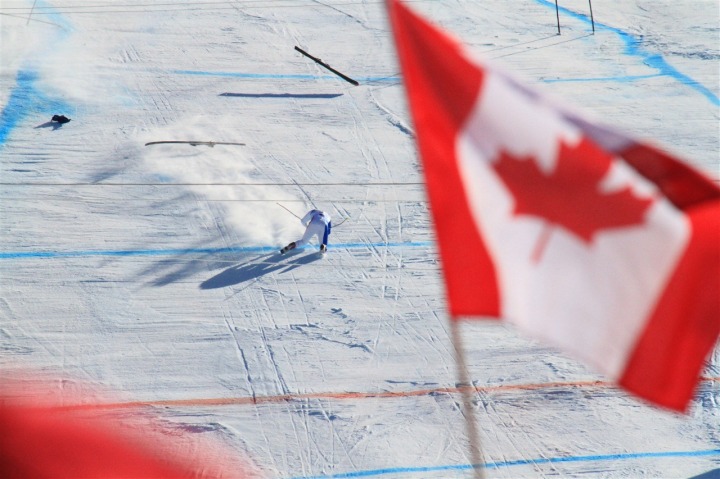 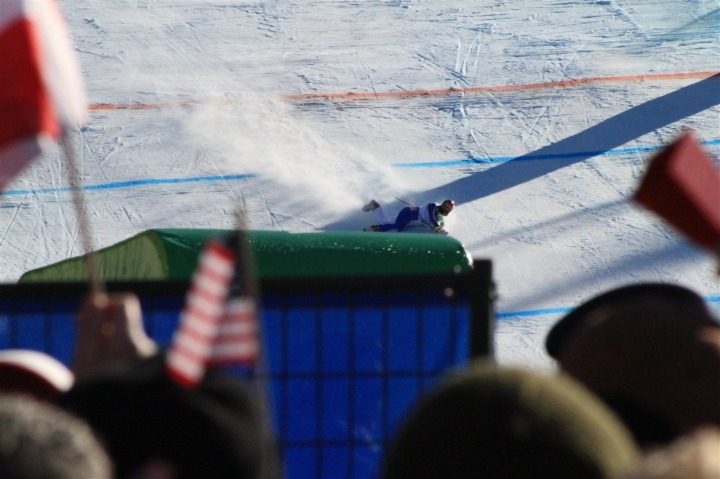 Despite being standing room tickets, the view was great – and the Olympic rings they stuck up on the course side is pretty cool: 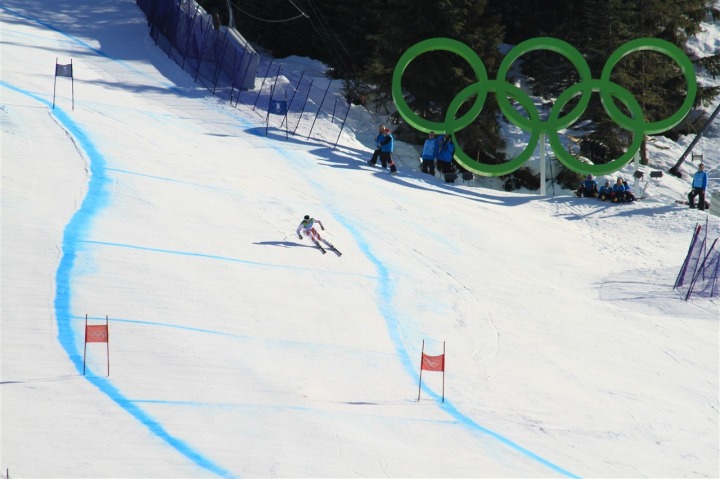 A short bit later American Bode Miller came down with a fairly respectable time, snagging the lead for a bit: 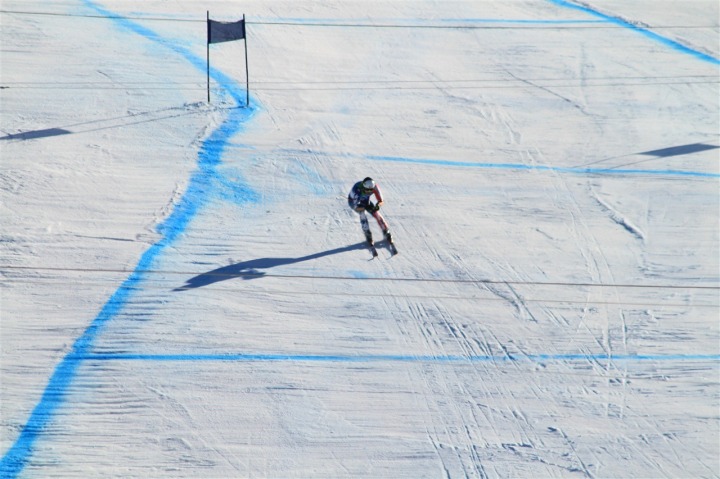 One thing that’s probably not mentioned on NBC during the evening Olympic Coverage is the food options from the food stands.  In short, it’s the same as what you would have seen at an old stadium concession stand about 15 years ago.  Hot dog or pizza anyone?  I had a number of hot dogs (even veggie dogs), but the Peanut M&M’s were my favorite: 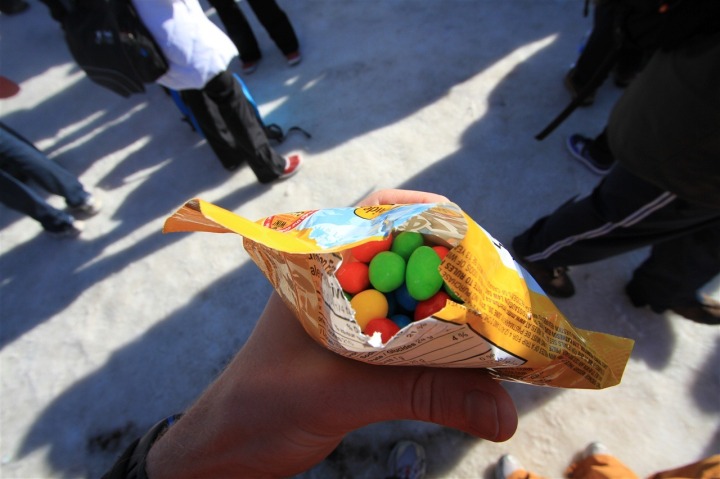 Another interesting tidbit is that at every event venue you’ll see the flags of all countries participating at that venue.  So in ski racing, it’s quite a few flags – but in sports like Hockey and Curling, it’s only about 8 or 9 flags.  Below is the timing shack, with the flags on it: 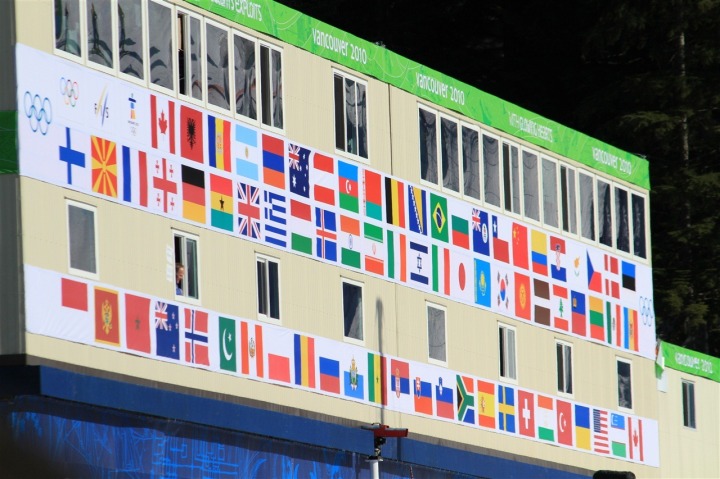 After 63 racers had come down we had the final results.  In reality, you pretty much know what the results will be after the first 20-30 athletes, as the last half of the field has a lower ranking and goes later.  Most of the skiers there are from countries that don’t have strong alpine skiing programs, but do manage to get some racers through the qualification process.

Bode didn’t end up taking the Gold, but he still made it onto the podium, so that was cool: 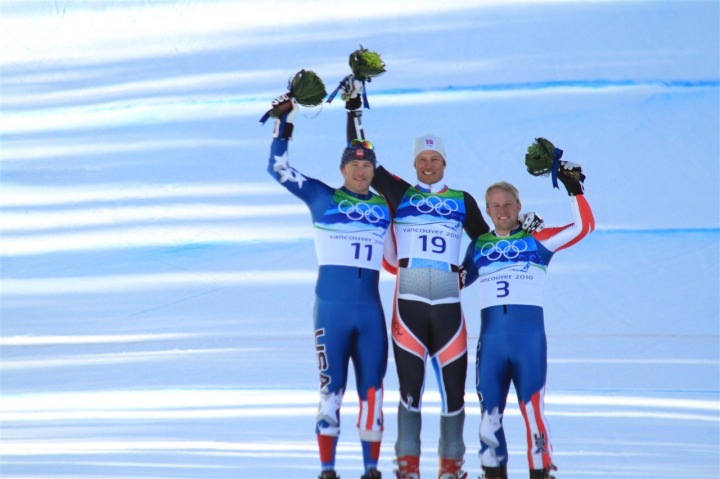 After that, we grabbed the lift back down to the main base area, before taking a bus back to Whistler Village.  We had actually found a last minute condo availability for a single night up in Whistler Village, so we decided to do that vice driving back and forth to the RV in Vancouver for two straight days (we had back to back tickets in Whistler).  Cost-wise it was a wash, since bus tickets run $250 per day for the five of us. 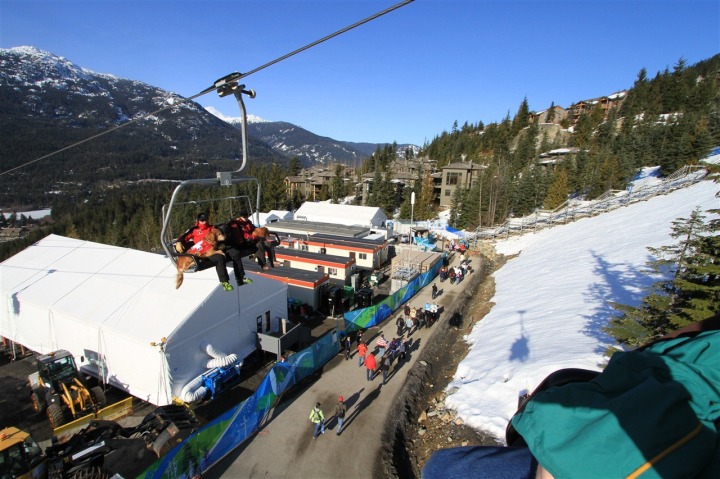 Later on that evening the Girl and I went go go check out Skeleton.  What’s Skeleton you ask?  Well, there’s Bobsled (remember the Jamaican Bobsled team…well, they didn’t qualify this year), then there’s Luge (where they go down on their backs, feet first), and then finally, there’s Skeleton – where they go down on their stomachs, head first.  In the hierarchy of sliding sports, I present you the following nutcase scheme: 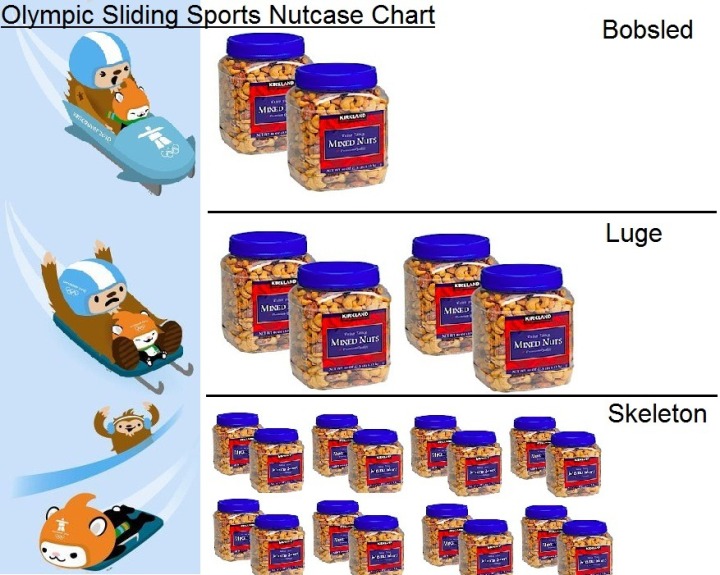 (Look, even the little mascots in the sleds aren’t thrilled – if you look at all the other pictures they have, they’re smiling)

And just as the athletes are nuts (or have significant nuts), it attracts some nuts as well: 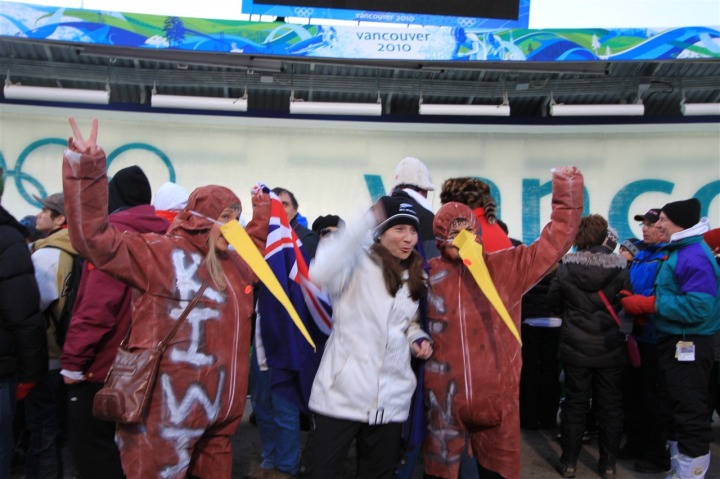 The venue itself is really cool, the finish area is a massive sweeping turn that winds 180* around the main spectator area: 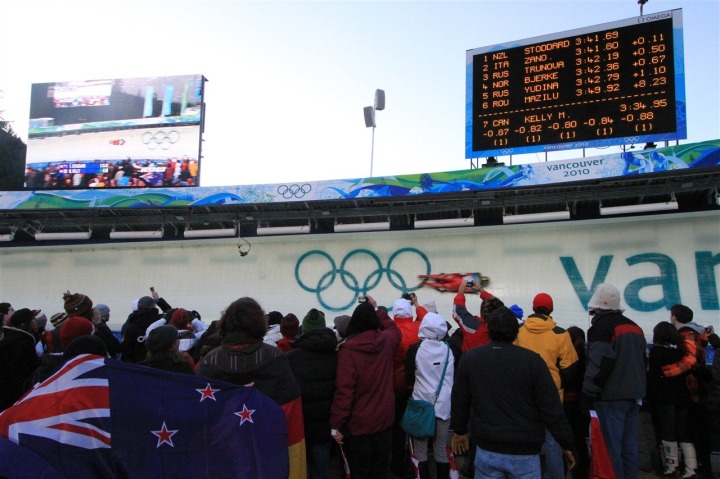 But, you’re allowed to walk anywhere you’d like along the course as it winds through the woods – so we did just that. 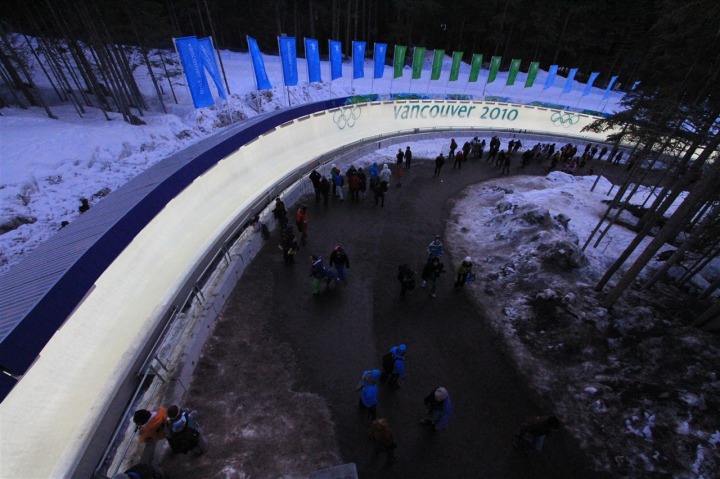 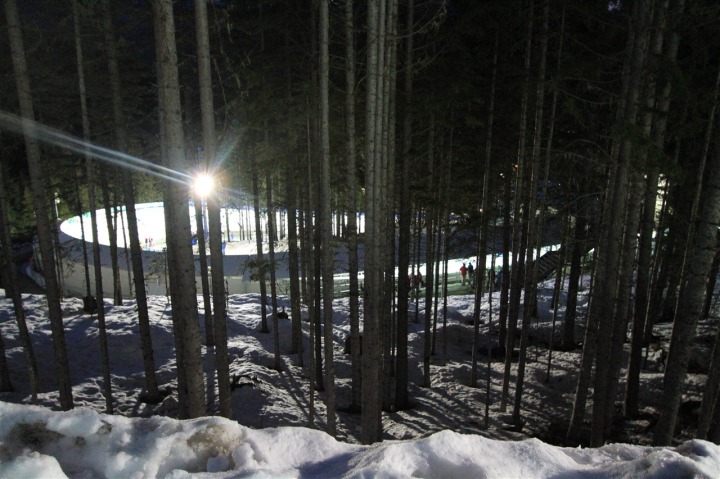 Along the way at a brief break in the race we got to see the track workers spraying water on it to form a fresh layer of ice.  You’ll also notice below the tiny laser beam timing system on the track above the blue line – which gives splits/intervals as the sled flies by: 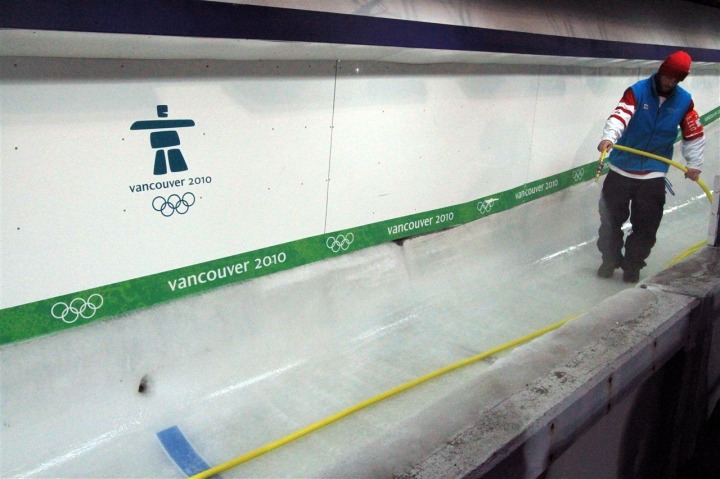 Eventually we made it to the top, and got to see the start of a few racers – very cool: 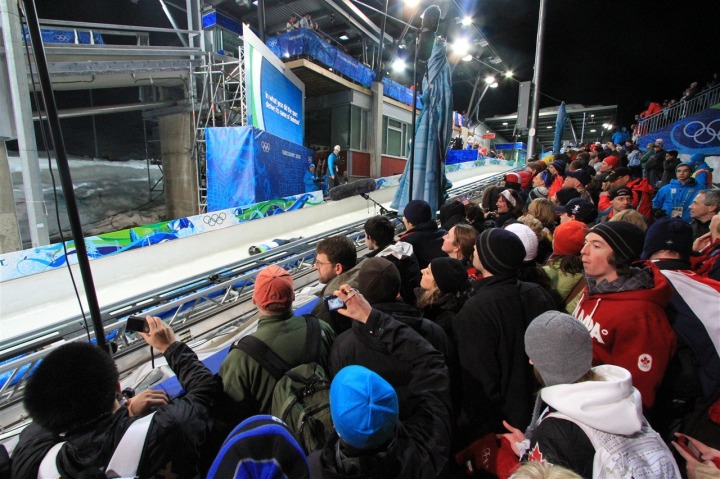 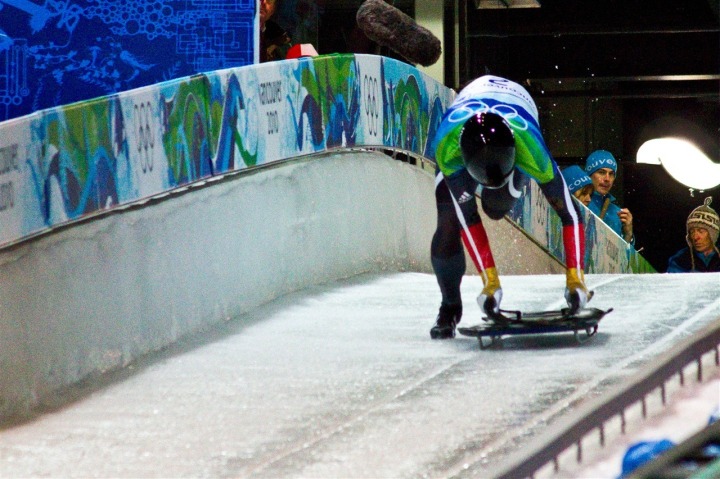 The area got pretty crowded, so we worked our way back down towards the finish area, stopping along the way to watch the skeleton folk zoom by.  It’s amazing how close they let you get to the course – you literally could give these guys a High-5 if you wanted to.  Though, it would hurt like hell at 100MPH. 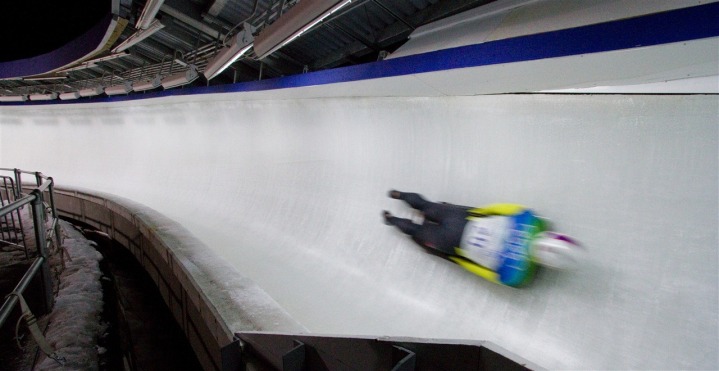 Some of the sweeping turns were the most impressive, like this one: 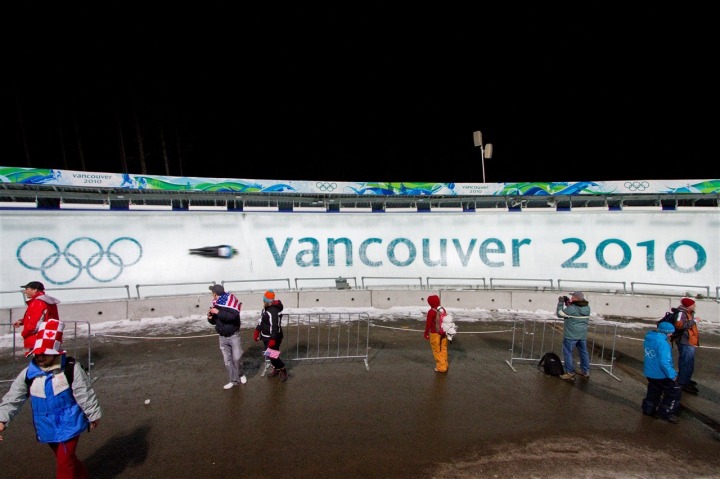 I ended up using a version of that for the new banner image, in case you haven’t seen it yet. 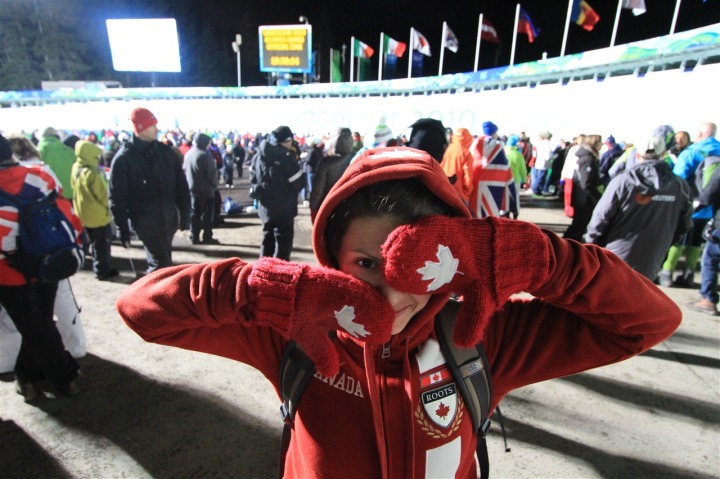 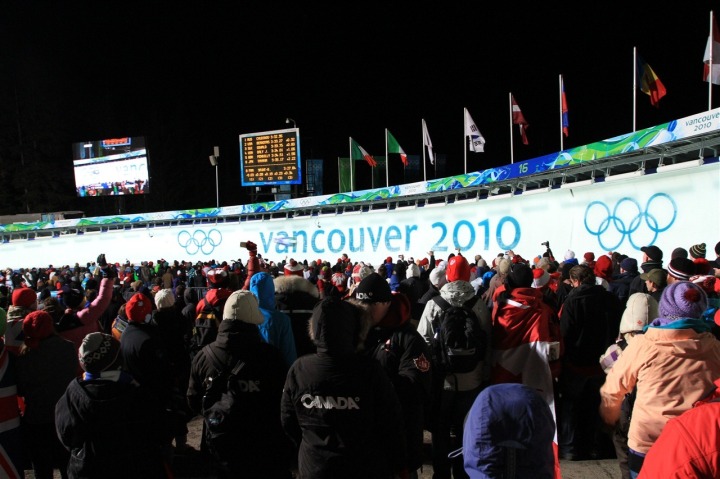 The Canadian would end up taking the gold – which was pretty cool.  We finally made it back to the Condo around 10PM, pretty late – but a day full of awesome stuff.  Tomorrow, our last day, we start the day’s event in Whistler before going back down to Vancouver for one final event.