After the previous night’s medal ceremonies followed by wandering around town, we were all a bit happy to sleep in some.  Around mid-morning I went out for an 8 mile run, and then afterwards went to pick-up The Girl from the airport.  We swung back to the RV park to introduce her to our collective home for the next few days.

See, normally a hotel would be an ideal option for the Olympics.  But hotels at the Olympics typically run between $500-$1,500 a day…for a single room…which is dang expensive.  So an idea struck last year to simply see about renting an RV.  It turns out, that was near brilliant.  The RV ended up only costing about $200 a night – and easily slept 5 people – and was right near a Sky Train station (subway like thing).  The rate included the hookups, park and everything too.  Sweet candy!

Anyways, post-RV park swing through, we headed downtown again.  Well, almost downtown.  We were going to the Pacific Coliseum, to check out short track speed skating.  Like most folks, I’d never been to a speed skating event – short or long track – so this would be a new experience.

In a lot of ways, speed skating events turn out to remind me of indoor track meets.  You basically have a very small track, and a bunch of athletes fumbling all over themselves and others trying to make the turns.  There are false starts, crash restarts (if before the 4th ‘cone’) and spectacular crashes. 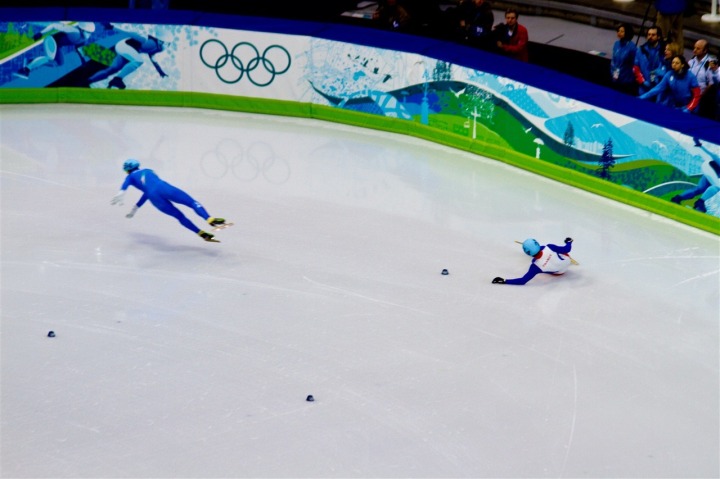 What’s interesting is that it generally doesn’t seem as though they are working too hard (from an aerobic standpoint).  Instead it appears that strategy and technical skill is what wins races.  It’s all about having the perfect line, and the perfect pass. 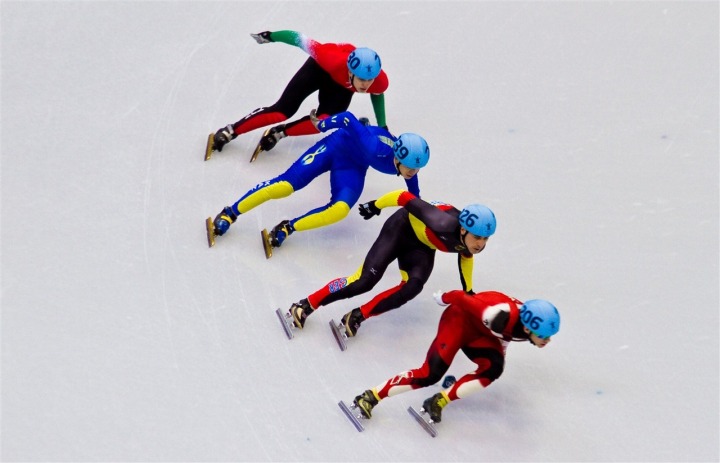 (In the above photo’s case, having seats in the 2nd to last row had it’s advantages for almost aerial like shots.)

Of course, the highlight of the night was probably getting to see Apollo Ohno Race: 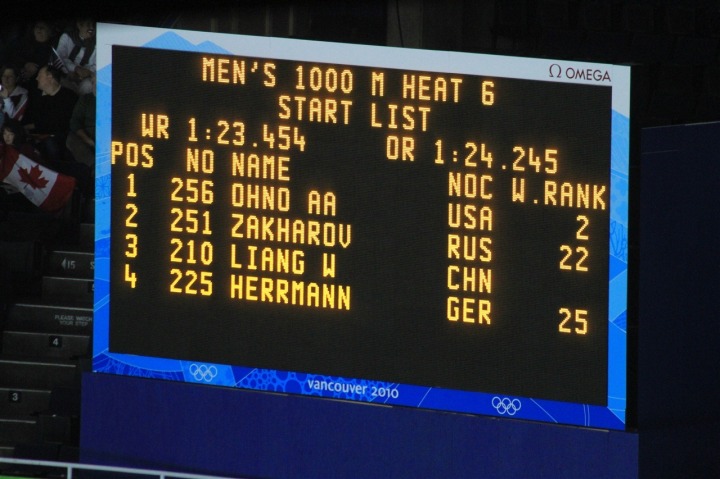 We would see him in a few individual events, and then later in team events.  Here he is at the start line: 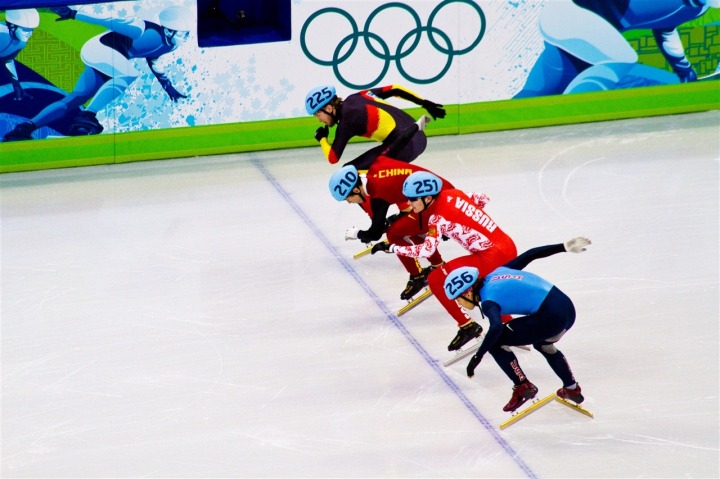 While seeing the individual events was cool, the team relays are where the action’s at.  This crazy event has four teams of folks that constantly swap back and forth every 1.5 laps (in one event we watched this for some 40 laps). 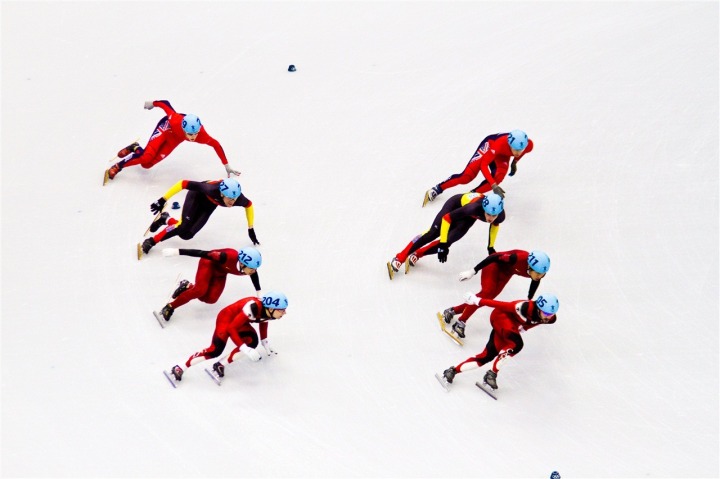 At the completion of each turn, they grab each others asses and give a big push. There are no batons like in track, it’s merely just a hand tag.  Here’s the Canadian and Chinese Grab-ass occurring: 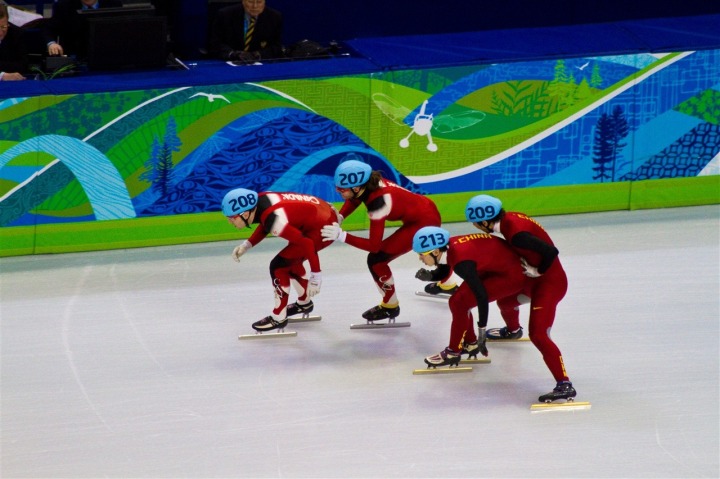 The other interesting thing about the relay’s is that if one team members crashes, the others can swing in and tag them and keep going: 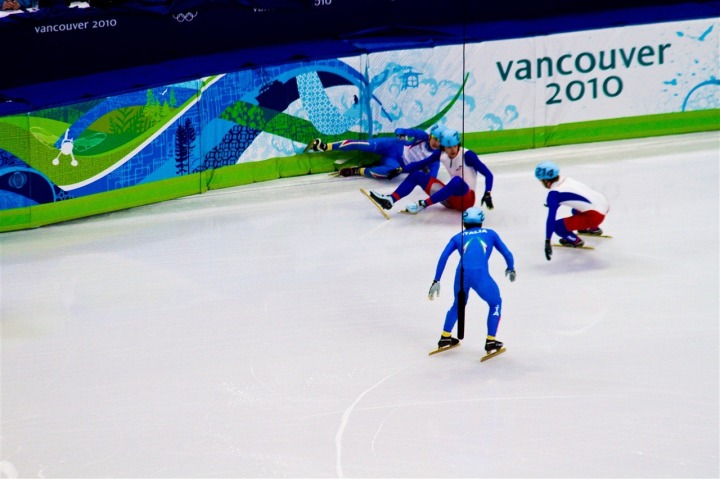 We got to see the ladies 500m finals, including a medal to one of the Canadian athletes in front of the hometown crowds.  It was cool to see all the volunteers (blue coats) coming out to watch her lap around the track with the flag: 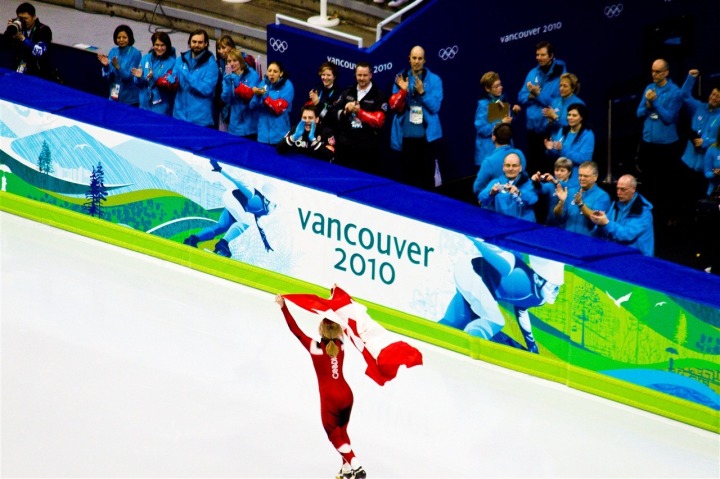 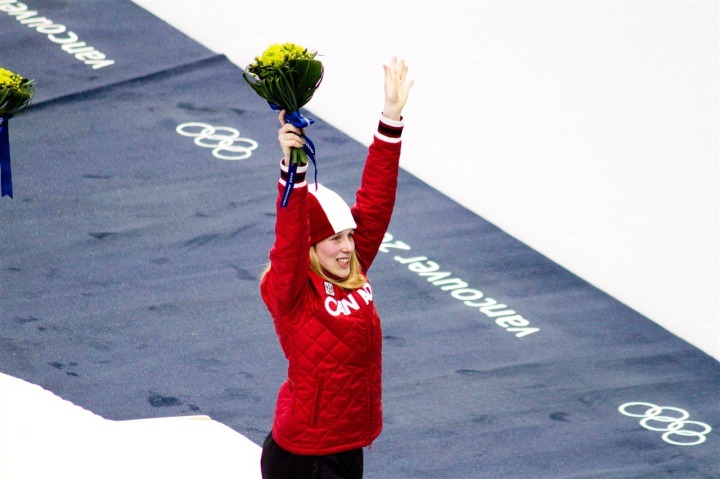 After watching skating we headed downtown to check out the torch.

Now, you may have heard some things about the torch.  Like when it first lit up last week, it was hidden behind a big opaque fence – un-viewable to spectators.  Visitors complained (as they should), and the situation was improved to chain link fence.  After more complaints, it was improved to chain link fence with a hole in it.  Rumor is, as of Saturday, it had been further improved to acrylic fence.  Either way, it was indeed a bummer to have it so restricted from view.  Here’s what it looked like behind the holey-fence: 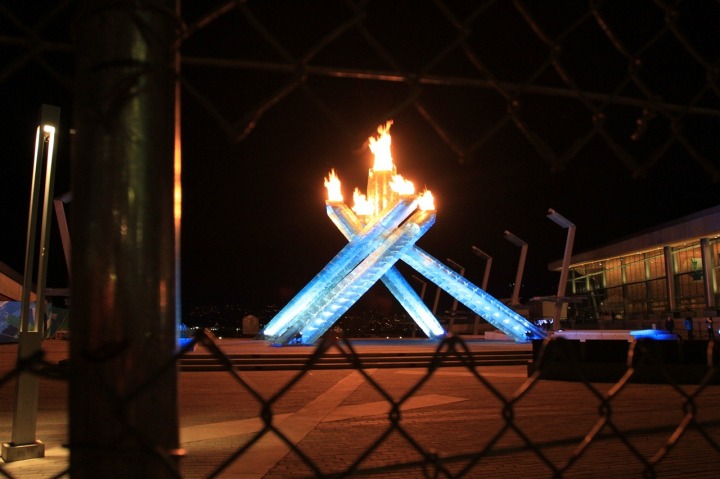 With a bit of creativity, you could get some so-so shots: 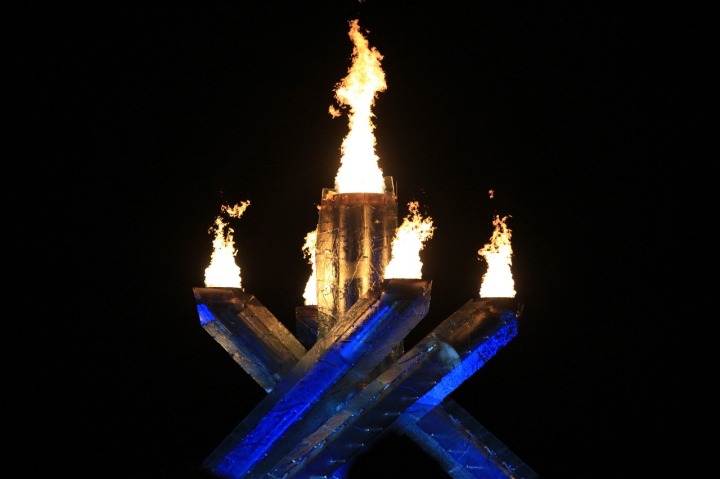 Finally, the last item of the night was checking out the Olympic Rings that were situated out in the bay, visible from quite a ways away: 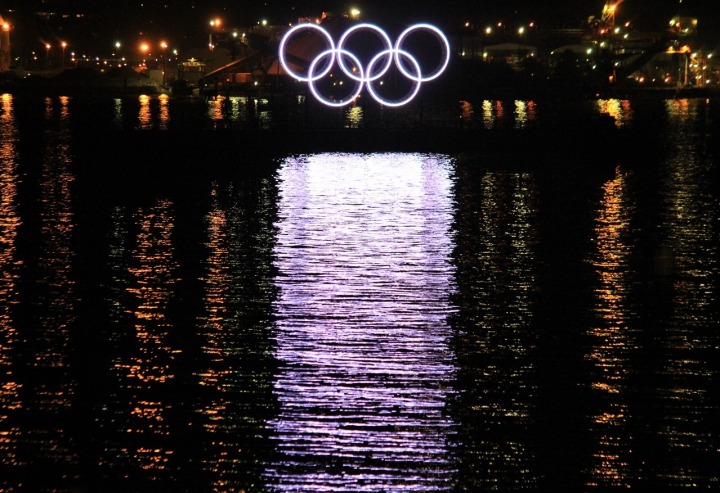 That’s it for this day, tomorrow we’ll be onto all sorts of fun events around town.