Our last day started much like the previous day – on the slopes of Whistler at Creekside checking out the Super-G, this time though it would be the women we’d be watching.  The crowds came out in full force for the action – with the house a bit more crowded than the day before: 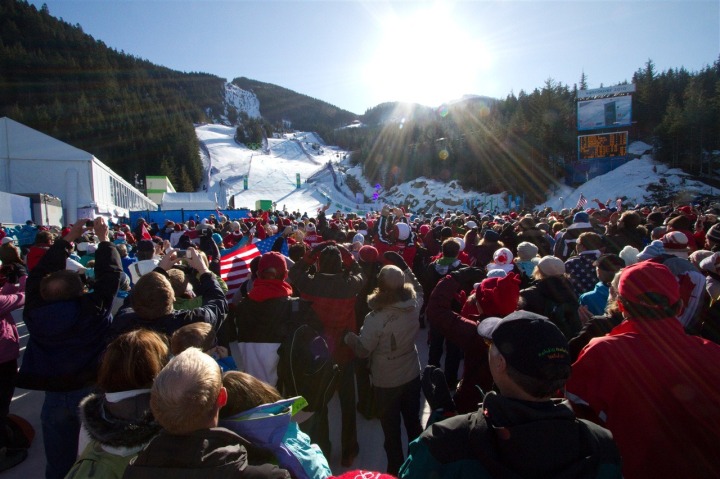 The clear focal point of the day would be Lindsey Vonn – could she take yet another medal? 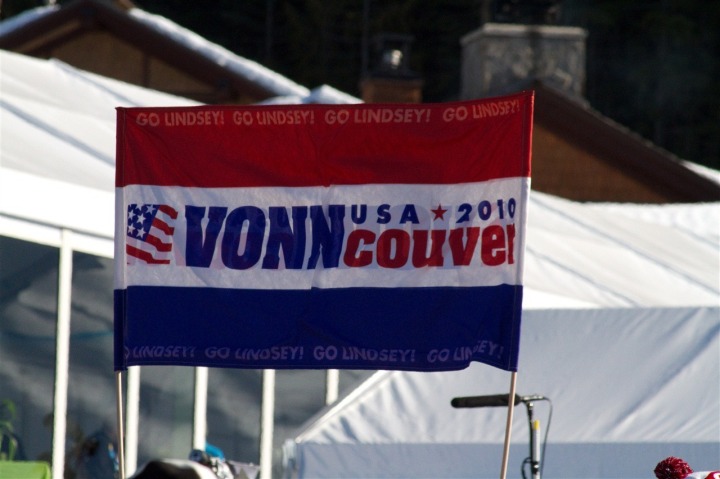 Now, I’d like to have a great picture of her flying down the course.  But I don’t.  Instead I have a gazillion pictures of Canadian Flags (at 16 frames per second).  Why?   Well, go look at that first picture back at the top of this post.  It’s OK, I’ll wait.  OK, got it?  Good, now note how far back in the crowd I am.  Now note how many people there are with flags.  Now let’s assume that 80% of them are Canadian.  This means I have countless shots just like this: 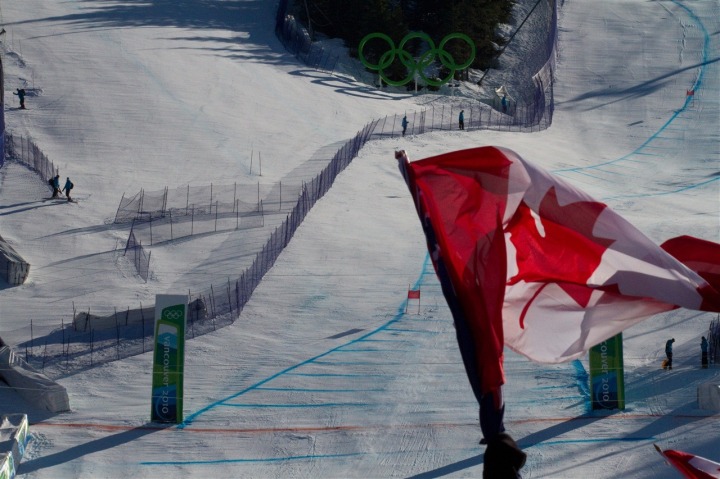 Oh, in case it’s not clear – Vonn is below that flag.  She’s also below this one: 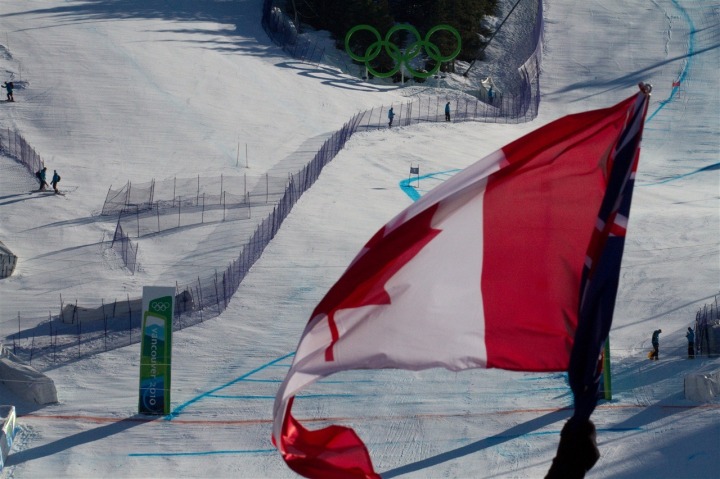 Now why would Canadian’s wave the Canadian flag for an American skier?  Because they waved that flag for every skier, no matter the country.  Luckily, they decided to take a break so I could get at least a few skiers photos: 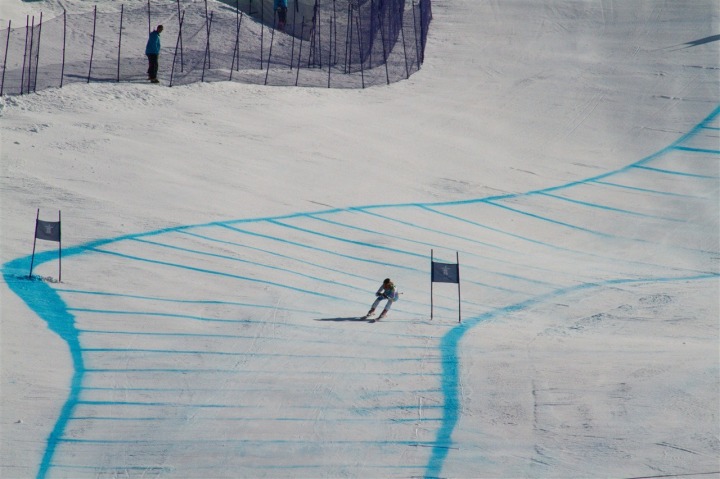 Despite the lack of Vonn ski-photos, I did manage to capture one solid pic (from that same position at the back of the crowd) of her on the podium, grabbing the Bronze Medal (well, actually, the medals aren’t presented until later that night at the medals ceremony).  She’s on the right: 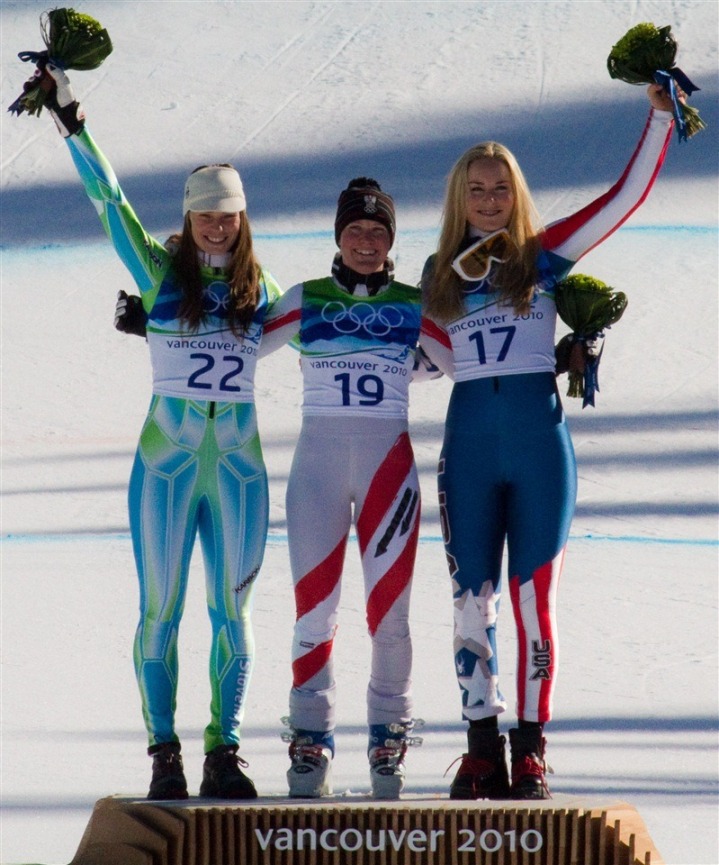 From there, the Girl and I zipped over to the Whistler Rec Center pool to get a 50 minute swim in before we had to head back down towards Vancouver, winding our way down through some of the amazing mountains up there. 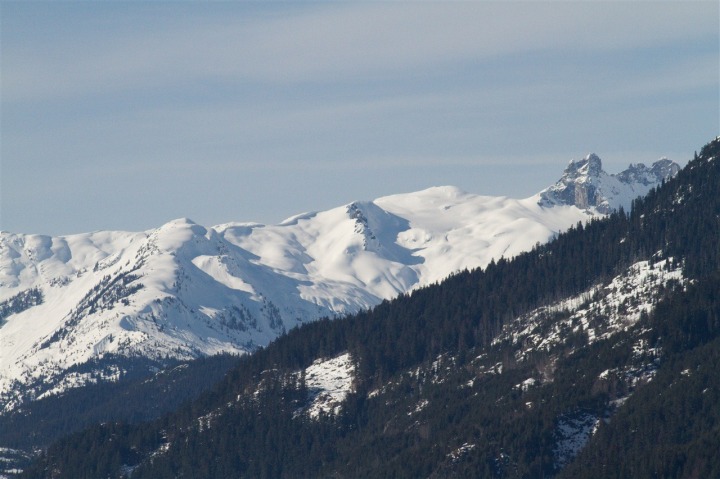 A few hours (and a few stops) later we arrived in downtown Vancouver – to crazy street filled crowds: 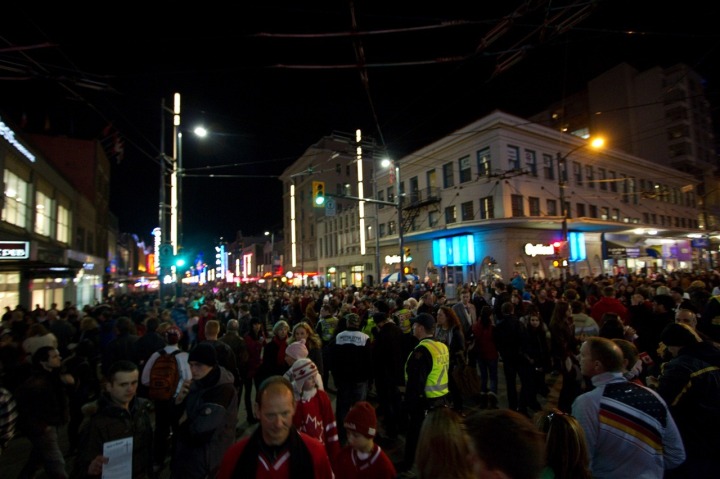 Also of note is all the random Olympic-related art-like things that are sprinkled throughout the city.  A lot of it was pretty cool…or at least blinky and shiny: 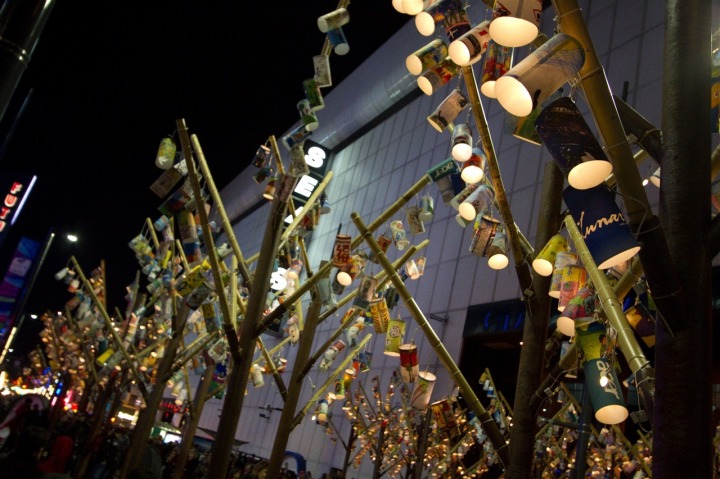 After a fair bit of walking and wandering we arrived at our final destination of the games – Canada Hockey Place, for a game between Germany and Belarus: 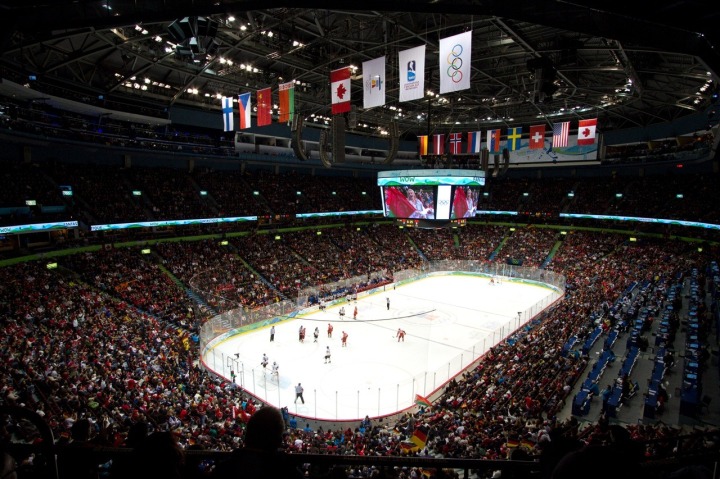 It continues to amaze me as to how much area is reserved for media.  It’s also pretty interesting that each person has their own little TV (with different sports covered, if they choose to change the channel). 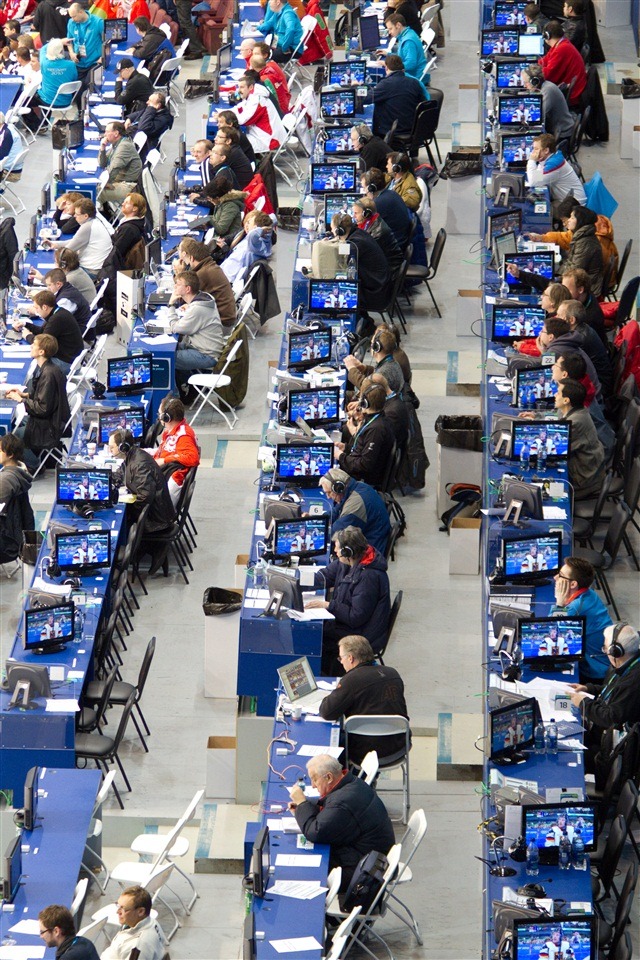 Speaking of other interesting things, at one point during the game a puck hit the crap out of one of the walls behind the goal.  Everyone heard it, it was incredibly loud and sharp.  A moment later some of the fans down near the wall started making a bit of a scene.  Turns out, the puck had broken the glass. 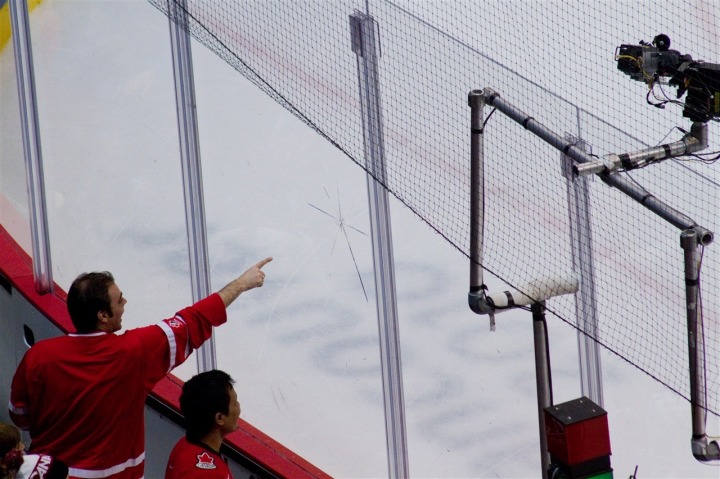 This lead to a bunch of little people rushing a replacement piece across the ice: 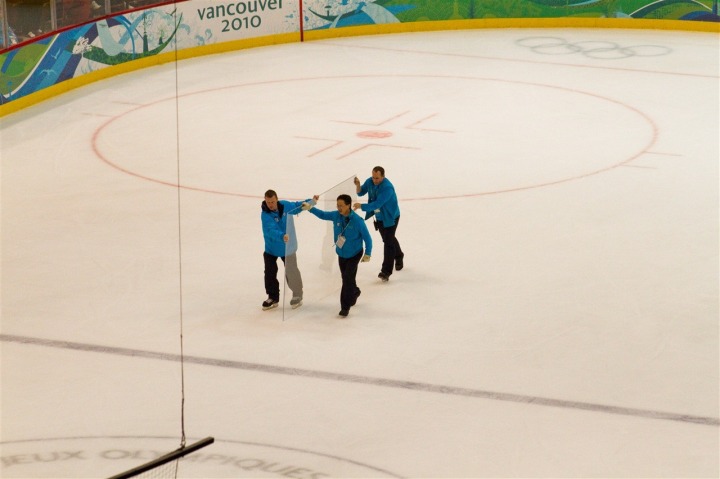 And from there they removed the metal posts and slide out the broken section – all in a matter of perhaps 90-120 seconds.  Like a NASCAR pitstop – incredibly impressive. 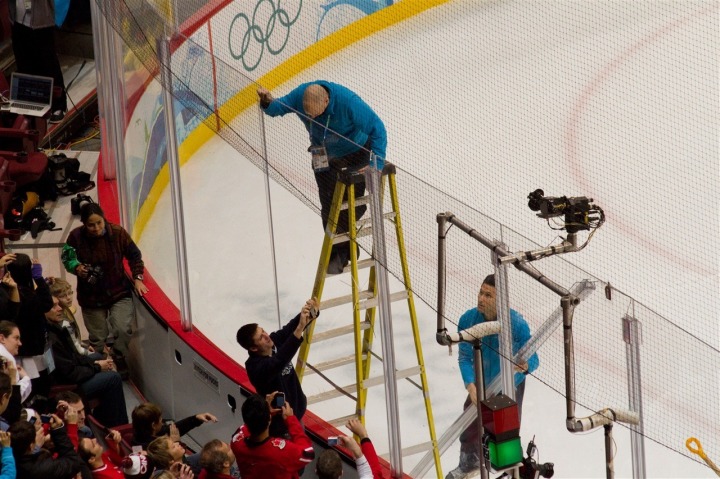 While the Russians take the cake for unusual displays of country affection, the Germans take the podium for largest display of a flag inside a building: 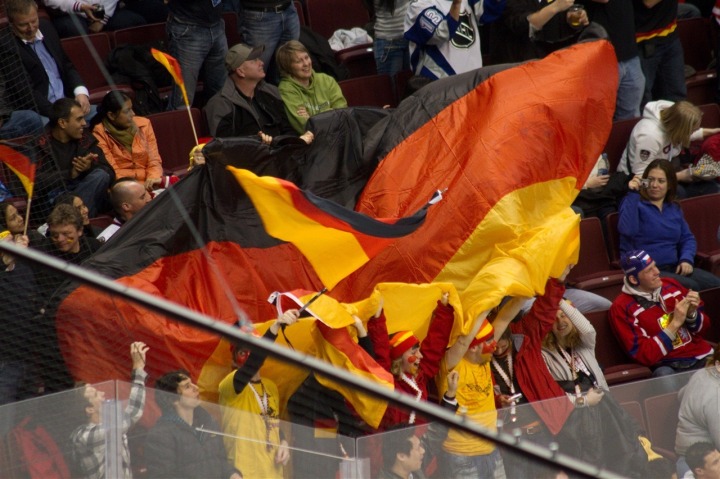 As for the hockey game itself, the school bus sized flag alone wasn’t quite enough to aide Germany to a victory, and Belarus took the win. 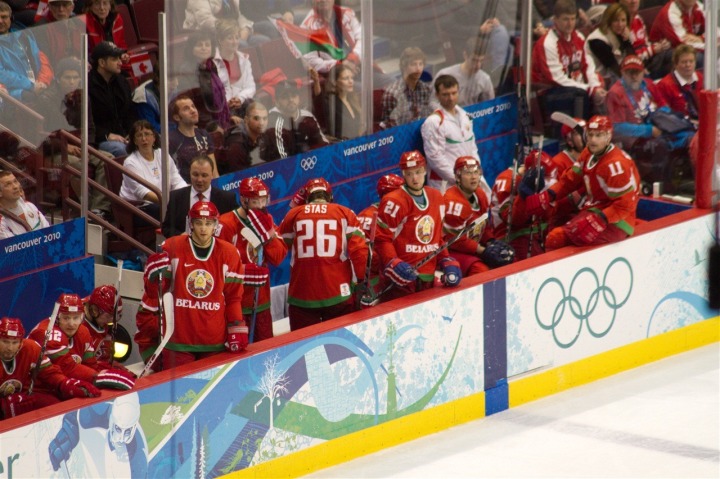 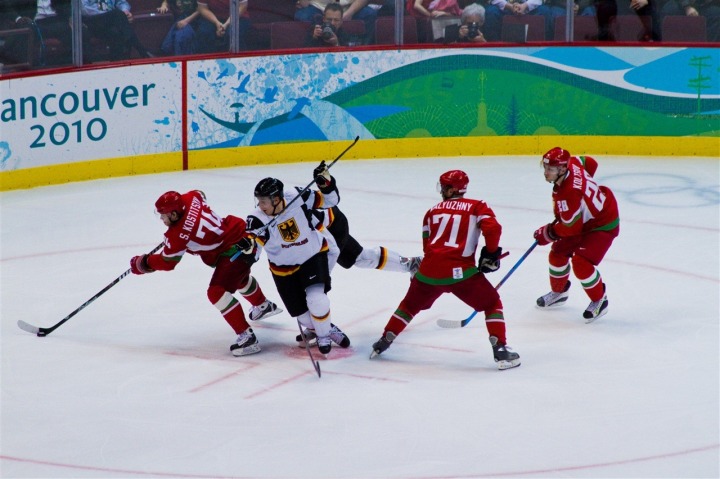 With the conclusion of the game we made a beeline for the border – crossing just after midnight and arrive home in Seattle around 2AM.  Later that morning The Girl and I caught a flight back to DC…and back to reality.

Reality has included a full week of training after last week’s ‘easy’ week.  I’ve got some good little non-Olympic tidbits saved up, so look for those on Friday.  Thanks for reading!