Upon leaving the desert on Thursday evening I arrived just over two short ours later in Seattle – the next stop on the trip.  This stop wasn’t for work though, it was for a nice enjoyable weekend of Seattle and Skiing up in Whistler.  Oh btw, if you follow along real closely – you’ll even get a never seen before photo of The Girl.  That’s right – she flew out for a short trip to hang out in my hometown for the weekend with me. 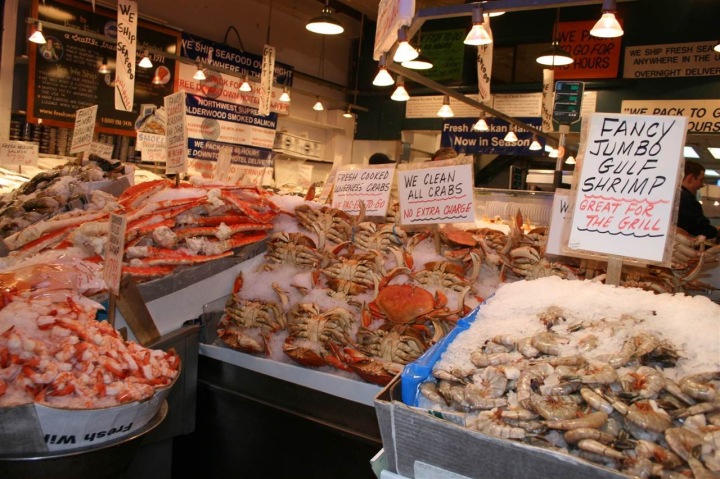 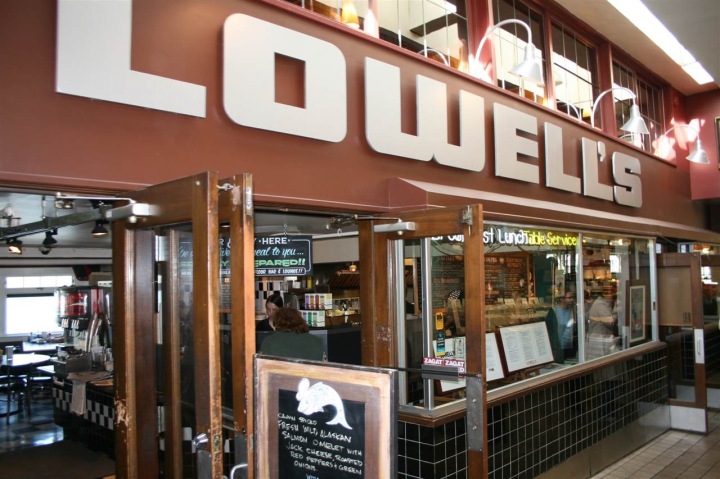 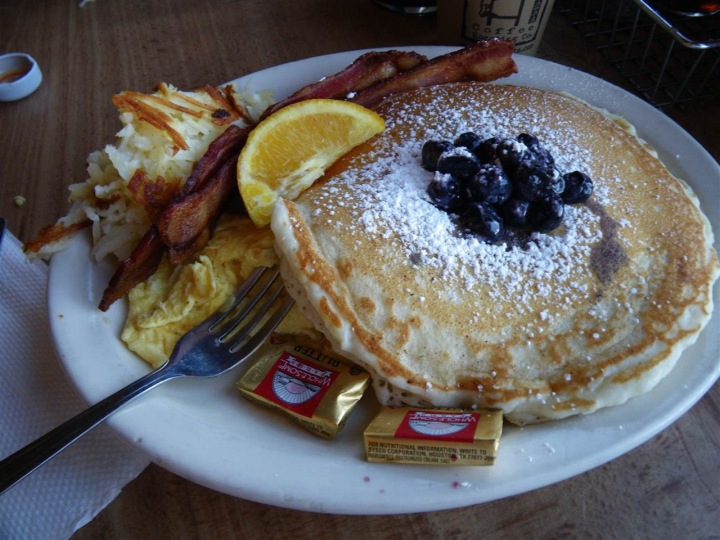 First item up in the morning was a trip to the Pike Place Market, in Downtown Seattle.  This local landmark is a real operating market with all sorts of good eats…and good views of Elliott bay.  We ate at Lowell’s, a favorite among locals and tourists (and Tom Hanks in Sleepless in Seattle).  After that, we walked down to the waterfront and caught a little water taxi across the bay to check out the view of the Skyline. 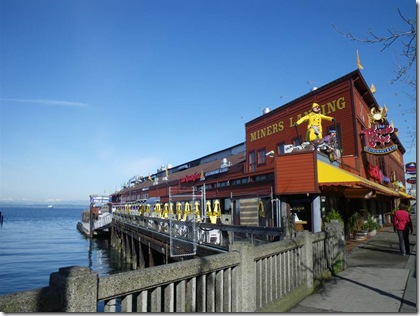 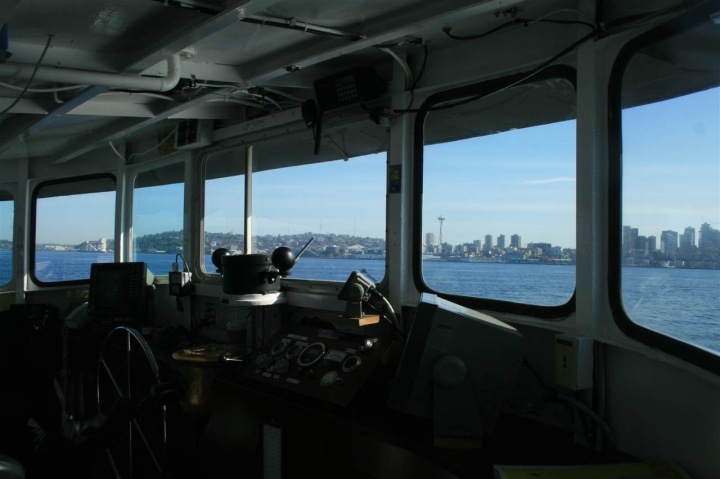 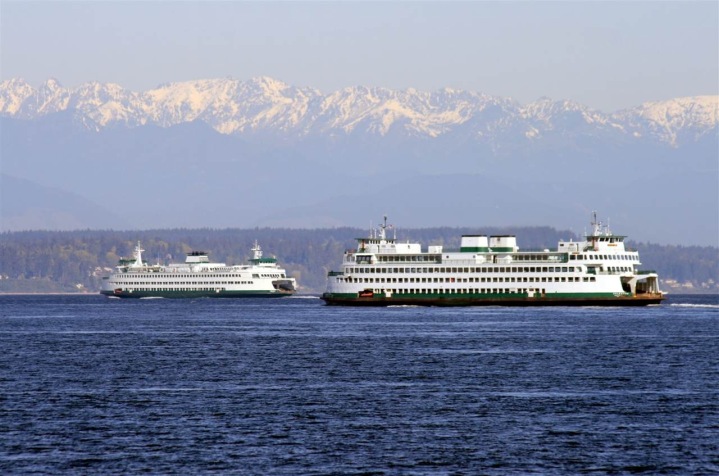 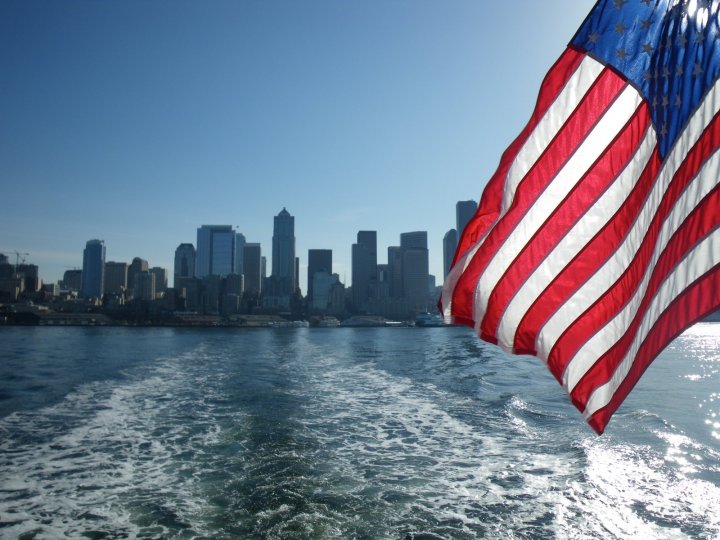 We then zipped up to the top of the Space Needle for the best view in Seattle.  It’s at this juncture that I should point out that the weather isn’t usually like this.  See, normally from roughly September to May, it’s rainy…every.single.day.  Or at least overcast.  But this past Friday – it was perfect! 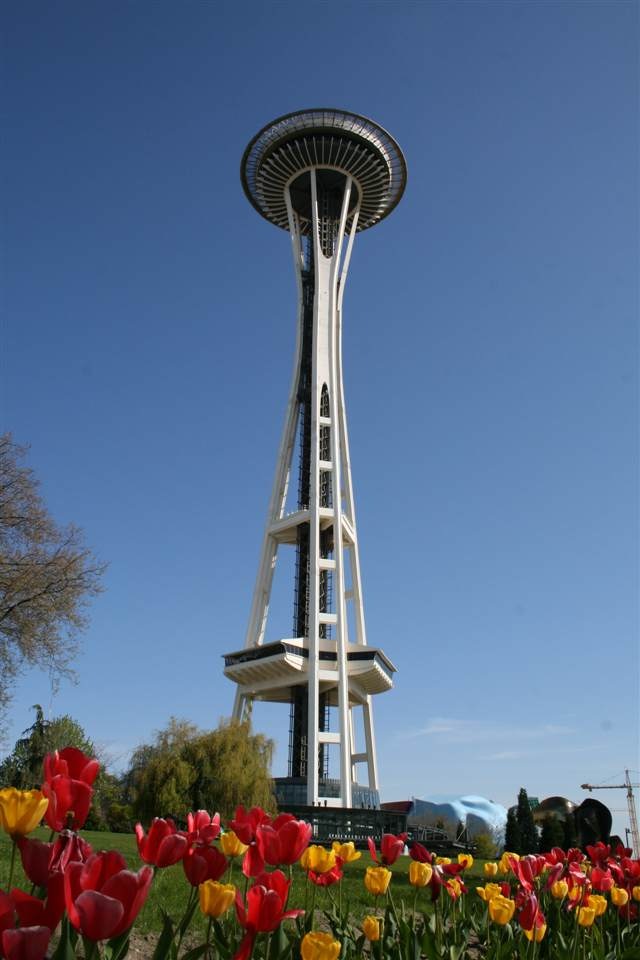 Even Mt. Rainier was out in full glory! 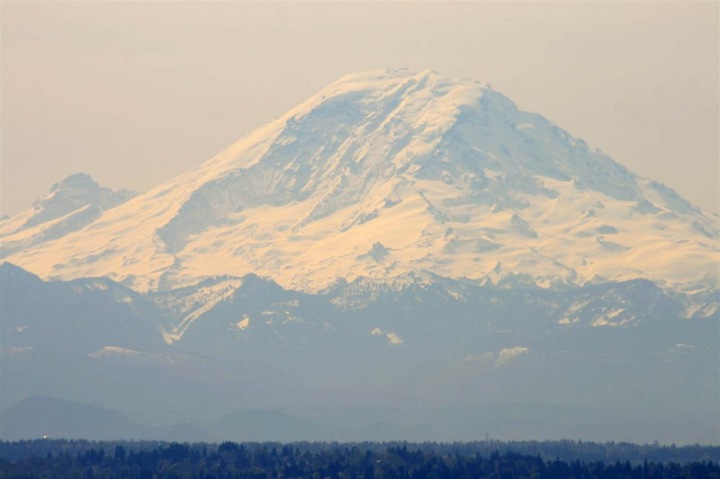 Oh yeah – we accomplished this and bit more – all by noon!  See, we were headed up to Whistler with my Mom, Dad and Brother in the afternoon.  The drive typically takes between 4-6 hours, and today was no exception.  But at least the last couple hours on the final road leading up to Whistler have some pretty impressive scenery. 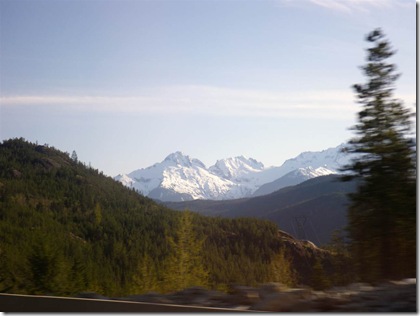 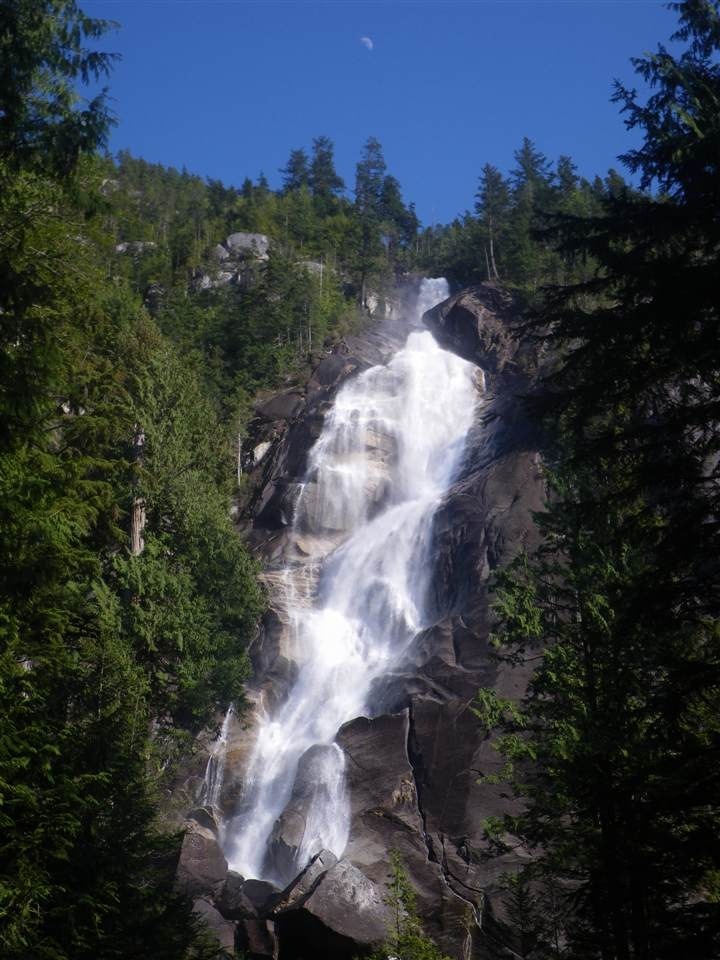 Later that evening the Girl and I went for a casual run around a local lake.  What may surprise you is that despite the fact that we often train at the same time on similar workouts…we rarely actually train ‘together’.  Our paces are just slightly different enough that normally it makes is difficult.  But, for once – we just ran together and enjoyed the run, instead of worrying about heart rates, paces and splits.  Nice!

Morning brought skiing – likely the last of the season unfortunately.  Of course, given how late in the season it is, snow is a bit sparse down on the lower runs. 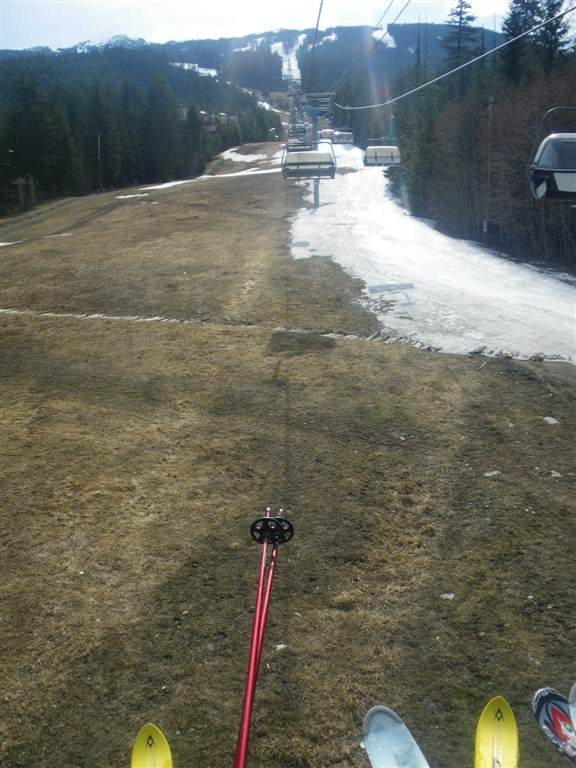 But, as you move up the lifts, the snow pack becomes heavier and there’s plenty of good skiing to be had. 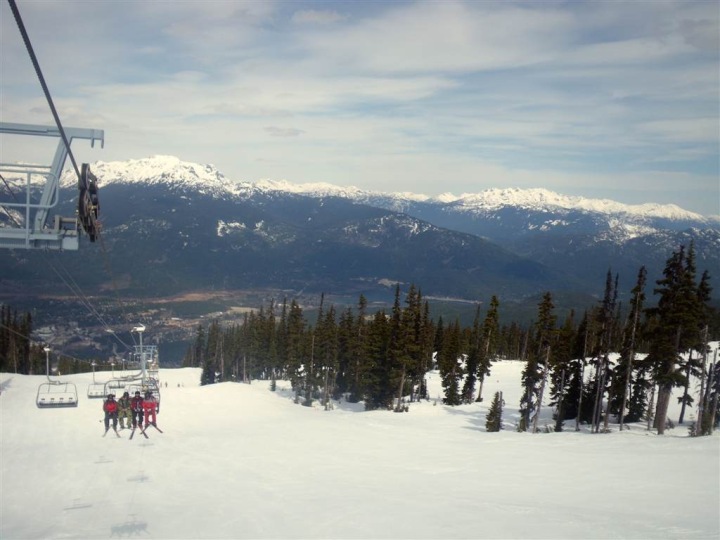 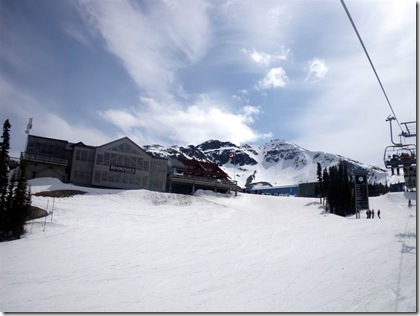 And at least this time of the morning it’s still sunny out!  The forecast had rain in it, but in the end it pretty much held off for the day.

After a number of runs on the front side, we decided to hit the Blackcomb Glacier.  This 10KM long run starts above 7,600FT and slowly descends back down towards the base.  Sometimes the drop in to this bowl is pretty sketchy, but today it was wide open, and quite nice.  Which was good – otherwise the girl might not have been up for it. 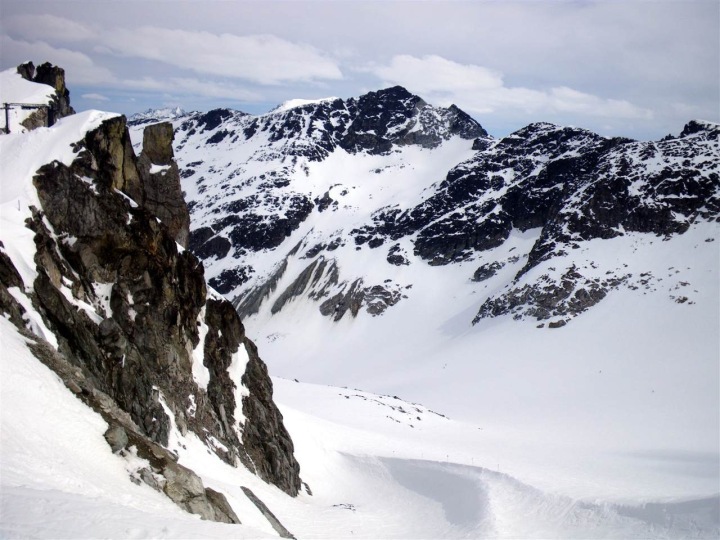 So, I promised you a pic of the girl, and I’m not one to go back on my word.  So, without further adieu, I present – The Girl. 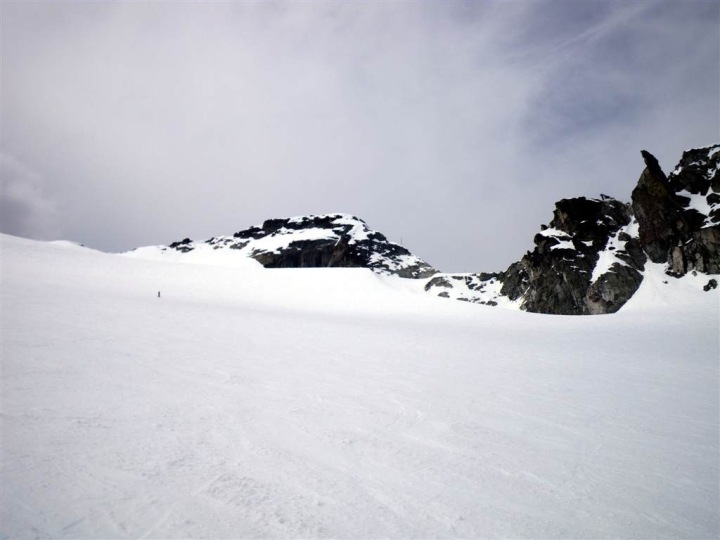 Yup – that’s her.  See that person off to the left a few hundred yards up the bowl…that’s The Girl.  Cruising down after us, good thing I snapped this picture now – otherwise a few seconds later it would have been a close up of her instead of a nice panoramic pic.

She meanwhile snapped one of me as I pondered my next move through the valley. 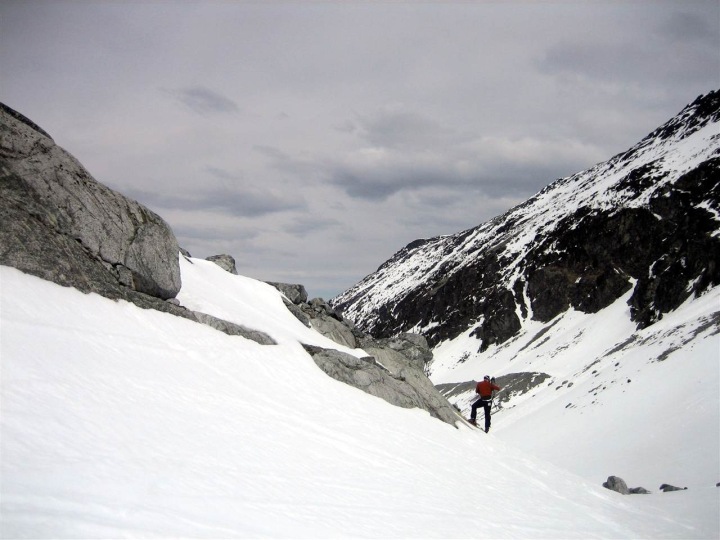 A few more runs later and she grabbed a shot of my dad and I discussing the rock cliffs above us. 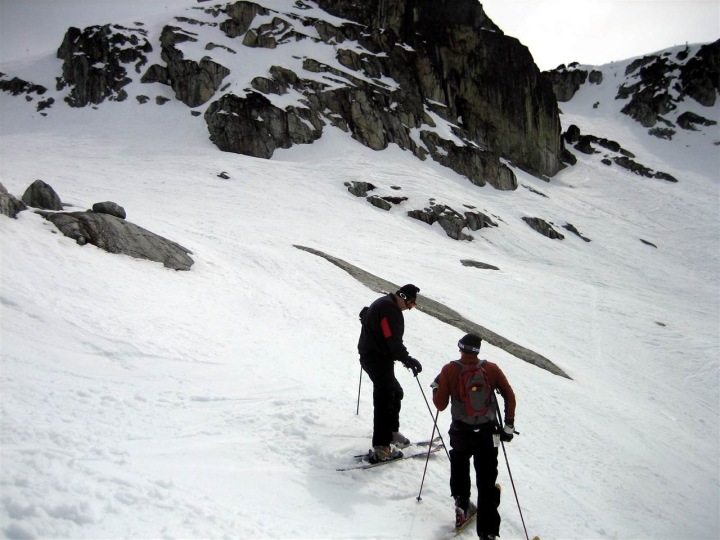 Apparently it was some variant of Halloween up in Canada, as a bunch of folks were dressed up – a massive gaggle of 20+ folks in all assortment of costumes.  I should have brought my Turkey costume along. 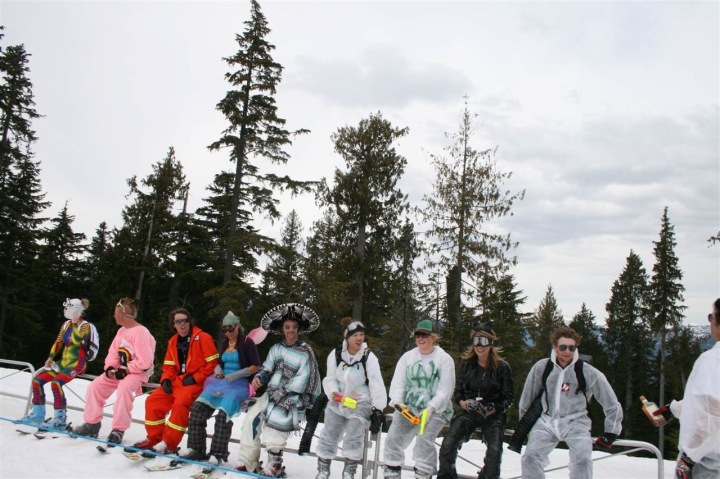 After a fairly full day of skiing, we made our way down the mountain and eventually to the ‘grasslands’ before we ran out of snow at the base of the hill. 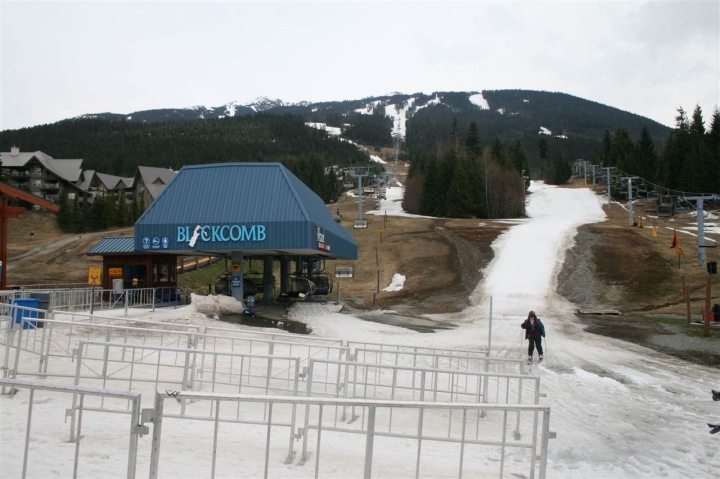 As a bonus at the end of the run (you can see it in the photo above), I even found a massive puddle to log some water skiing time in on. 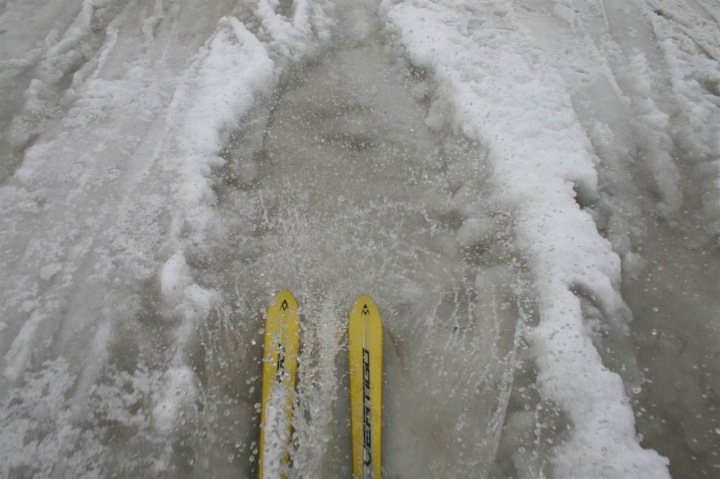 Of course, being an east weekend without any official training scheduled, we sat back and relaxed at a bar at the base of the mountain for a bit before wandering around the village and eventually grabbing dinner. 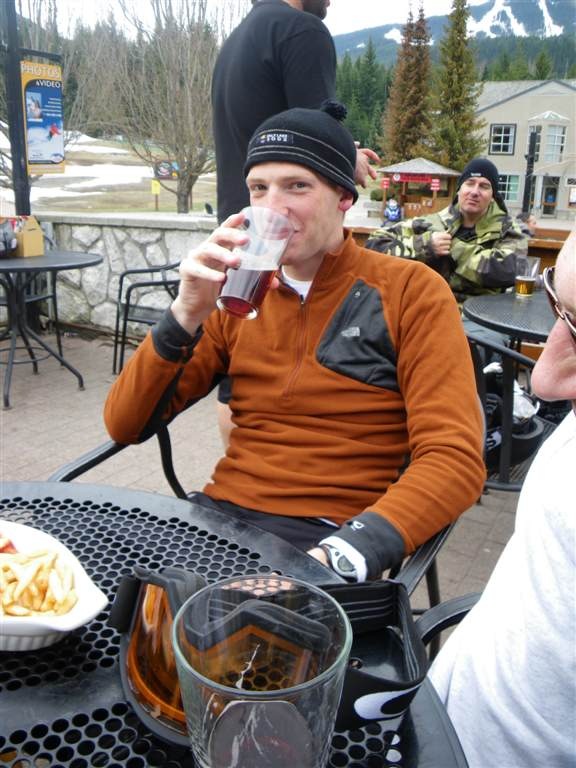 Sunday we drove back down to Seattle.  But before loading up the car and heading out we went for another hourish run together, just wandering along local rivers and lakes.  A nice cool morning for a run. 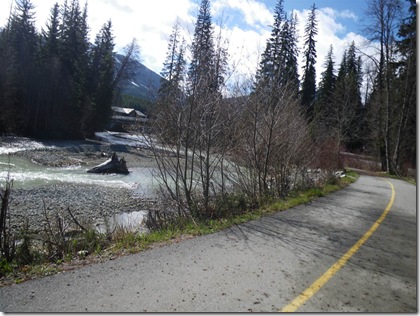 A number of hours later we got back ‘home’, and were able to catch the sun setting over the local beach just a short jaunt from the house. 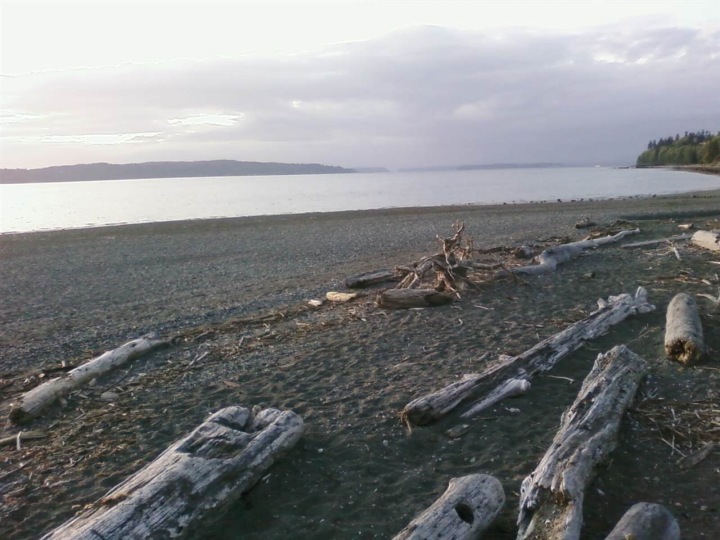 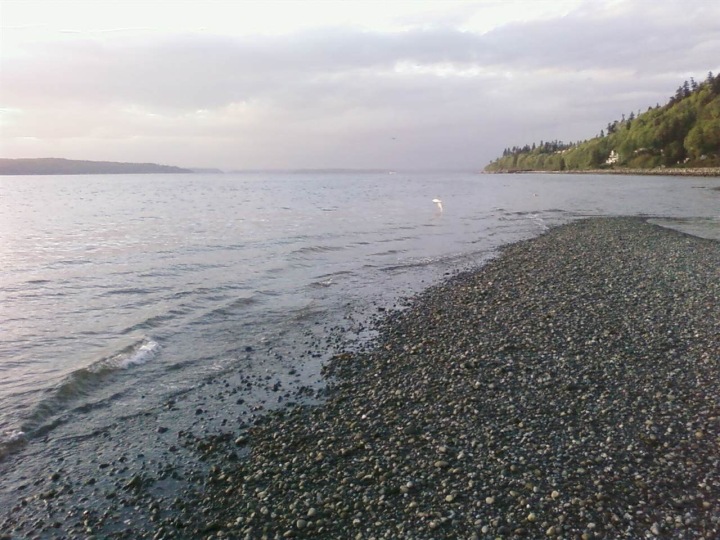 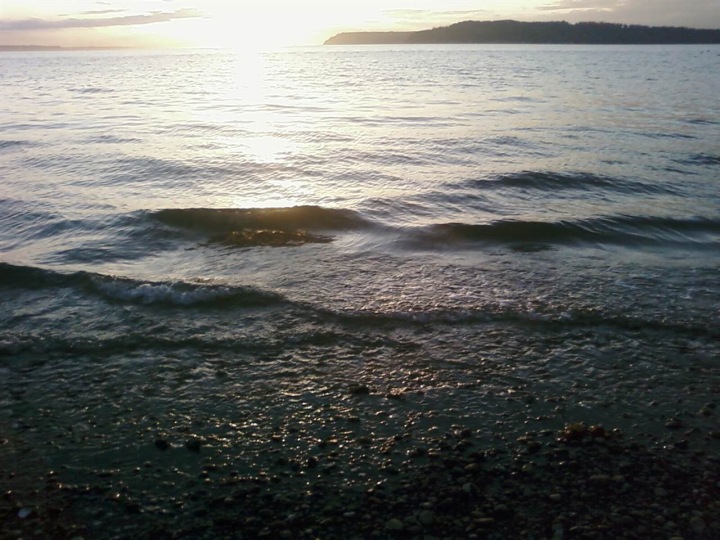 That’s all I got!

We caught a redeye flight home late last night and I was back in DC this morning for a short bit.  Got a full week’s worth of training starting tomorrow before a sprint tri on Sunday, and then out I go again – just a little over 10,608 miles of travelling scheduled for next week.

(And oh yes, I am sooooo far behind on reading everyone else’s blogs…I’m getting there, I need to formulate a plan of attack…)