I’m generally not content with staying in any one place very long. So after five days back in DC following Wildflower, it was time to jet back to the west coast for some international skiing action. Oh, and the fact that my Mom came up with the idea as a Mother’s Day weekend with the family kinda made it an even better idea.

I bailed Friday afternoon and landed in Vancouver around 8PM, just in time get picked up at the airport by my parents and brother – as they were heading northbound from Seattle up to Whistler. A couple hours later we arrived at the village.

As a kid our family went to Whistler a fair bit, primarily because it was super-cheap with the exchange rate at the time (not now) – and it’s only about a 4-5 hour drive from where I used to live in Seattle. Plus, it’s got a great atmosphere and we stay at a place less than 100 yards from the gondola, in the village. And that’s before we even talk about being some of the best (if not the best) skiing in North America. Woot!

Most times when we come up in the spring its got beautiful blue sky weather and incredible spring skiing conditions (you can ski until late summer here). However, the weather gods decided that I didn’t have enough rain lately, so they basically delivered rain & light snow all weekend long. No worries though, we still had a good time.

Saturday encountered fog, rain, snow, and one very brief patch of brightness that we assume may have represented the sun. Like my France ski trip a few months ago – I took my Forerunner 305 along and let it record all day. This had the added bonus of automagically geo-tagging all my photos with the exact location they were taken, using this free software. 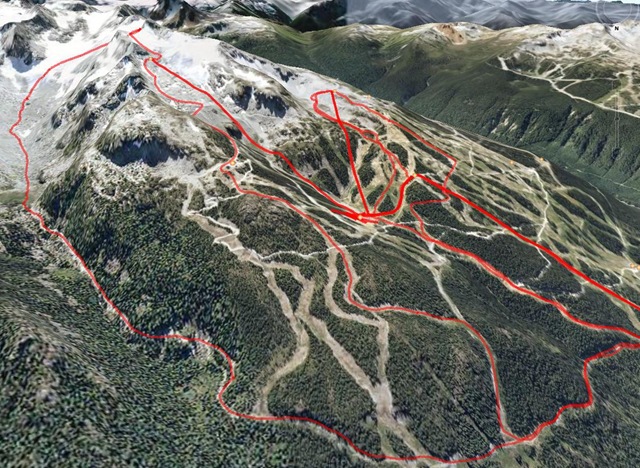 After a few warm-up runs we headed out to the Blackcomb Glacier for a nice 10K run (ski run, not run-run), this is the red line that is down the left hand edge. Normally this run down the ‘backside’ is pretty fun. But today, it was a bit iffy up top. Primarily cause we couldn’t see jack, and the entrance required a 50 yard walk while carrying skies along a small 1 foot ledge (after the initial 100 yard hike up). Falling or loosing balance would have resulted in significant pain, and a near guaranteed medivac out. Usually the entry isn’t this bad. The good news is neither my dad, my brother or I fell. Here’s us on the hike up to the ledge start: 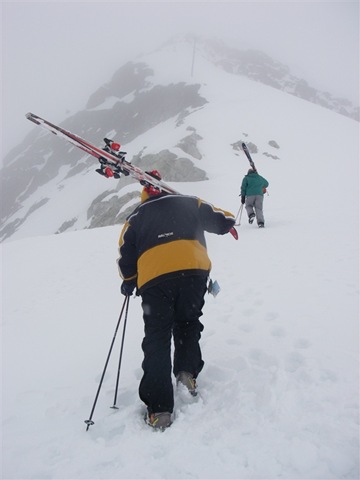 Here’s us passing the ‘gates’ to the pseudo-backcountry. The signs basically say “At this time of year, nobody will come looking for you, you’re responsible for your own death and body removal.” Roughly. Actually..kinda exactly. 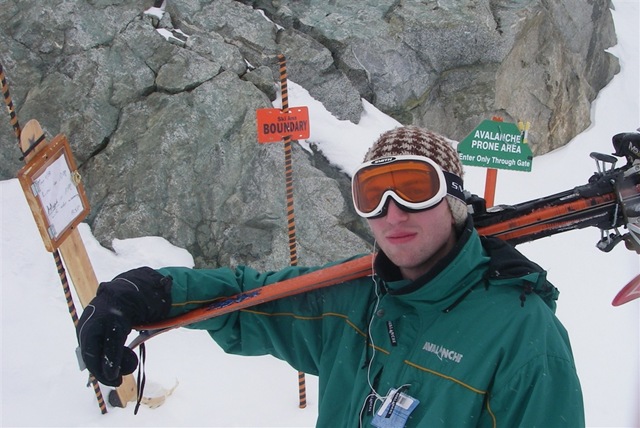 At this point I should mention that both my brother and I used to ski race competitively, so we’re fairly comfortable skiing basically anywhere snow (or snow and rocks) exist. Given our dad taught us to ski – he goes everywhere we go. He’s a trooper. Cause some of our ideas aren’t too bright. 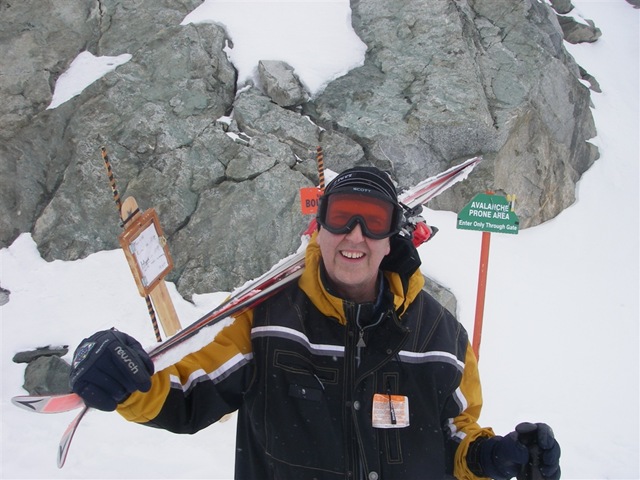 After that photo, we carefully edged along the 1 foot trail, recollected our nerves and headed down. Here’s a self-shot before going off into the abyss. 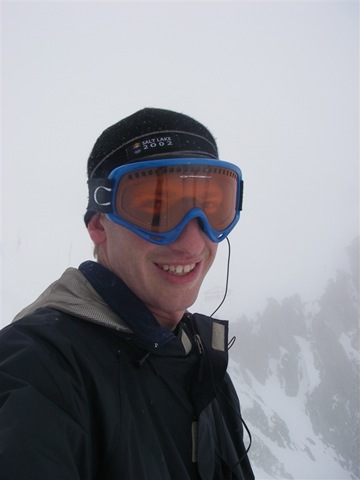 Following our 6 mile run, it was time for lunch on the hill. After which, we headed out for some more runs. Due to the slow snow (wet) and the lack of visibility, there were no ‘fast’ skiing runs this time. Our current ski speed record of 70.5MPH will have to remain until next season.

While we couldn’t find any houses to jump like in France – my brother did make some solid work of the terrain park. A few 720’s and serious air tossed in for good measure. Because of the less than ideal conditions none of the photos came out fantastic – but they came out enough to get the point across: Huge air. I was standing on the jump and he was solidly over my head rotating. Unfortunately for him, his landing back on planet Earth was a bit ‘rough’. Oh well, he was able to remember his name again by time dinner rolled around. 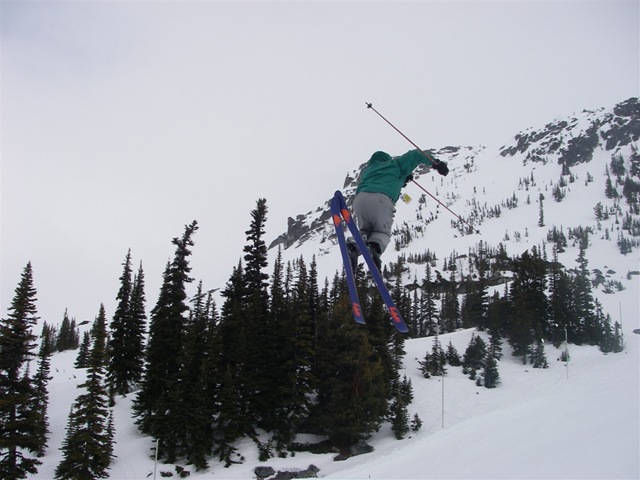 After a few more runs, we called it a day and headed back to the village. 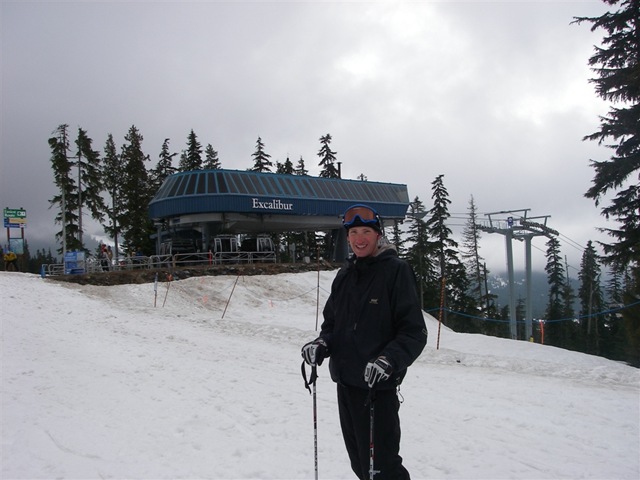 On the Gondola back down – we saw a bear. Actually, we saw Mr. Bear on the way up and the way back down. 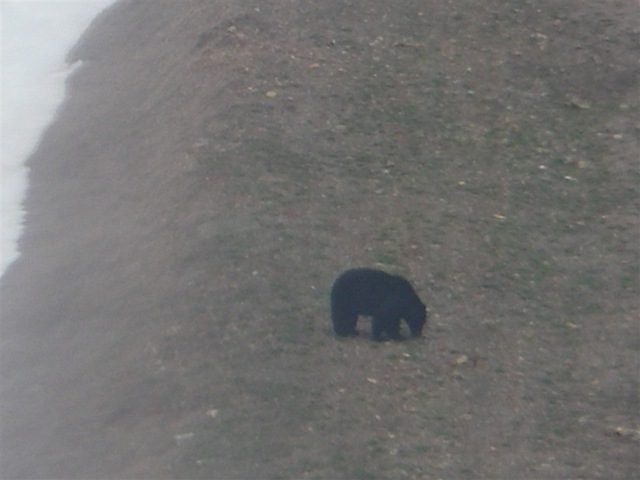 Go figure – two bears hours apart in the same place. And yes Audrey – this bear is like Yogi too. 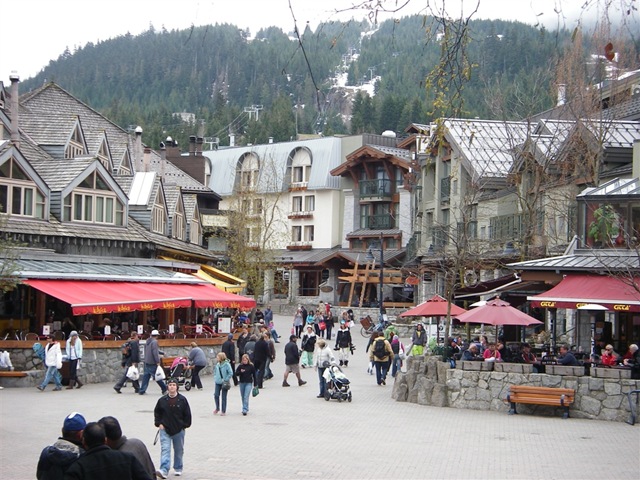 (Here’s a shot back in the village) 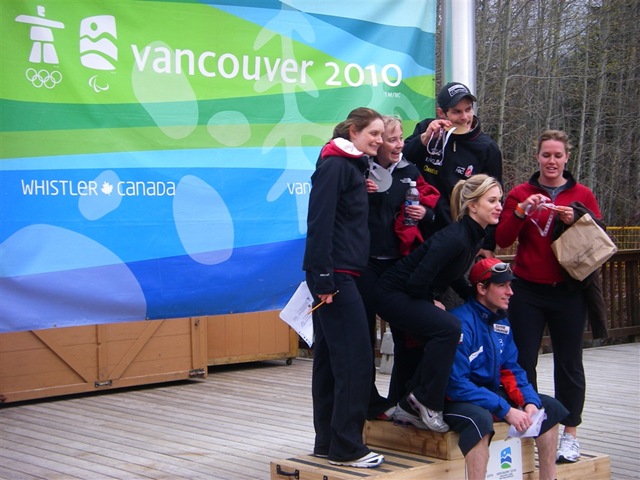 As I was milling about the village I stumbled on a small information center for the Vancouver 2010 Olympic Games (which Whistler hosts many alpine events). Out of nowhere a group of fit-looking peeps came running in, apparently on some sort of scavenger hunt. It turns out it a whole bunch of Olympic hopefuls were having a scavenger hunt around the village. Kinda cool. The blond girl in the middle is apparently a figure skater. I can’t remember what sports the others ones are doing. Their task at this stop was to take a photo on the podium with fake medals.

Sunday’s weather didn’t fair any better, so we bagged on skiing and instead enjoyed an incredible Mother’s Day Brunch Buffet at the Chateau Whistler. Amazing food. Sometimes (ok, most times), buffet’s are ‘blah’ food. But every item I had was perfectly cooked and the right temperature (hot!). 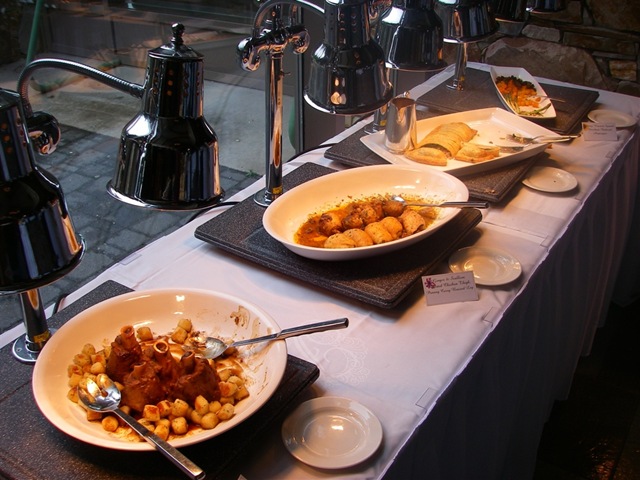 Above – a small snippet of the food available. And then the dessert table (actually, one of two dessert areas). 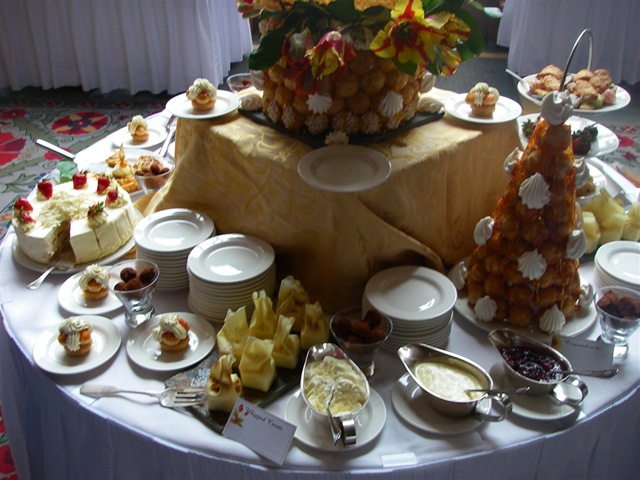 Following eating waaaay too much food we bounced around the village looking at places with a real estate dude. Why were we looking at places? Cause soon I might be a Canadian property owner. We’ll see, still running all the numbers (no, I’m not moving to Canada, just an investment thing).

All in all – an awesome weekend! Oh, and I didn’t do any workouts aside from core ones. I shall now jump on the redeye back to DC and therefor have an enjoyable Monday. Have a good week!